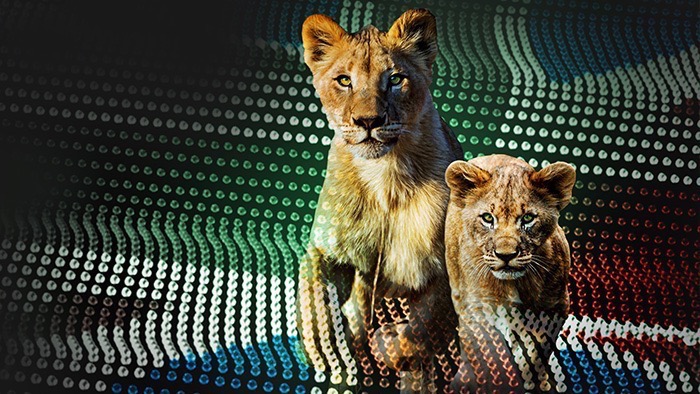 Difficult market conditions have prompted yet another bout of ‘back to basics’ filtering. 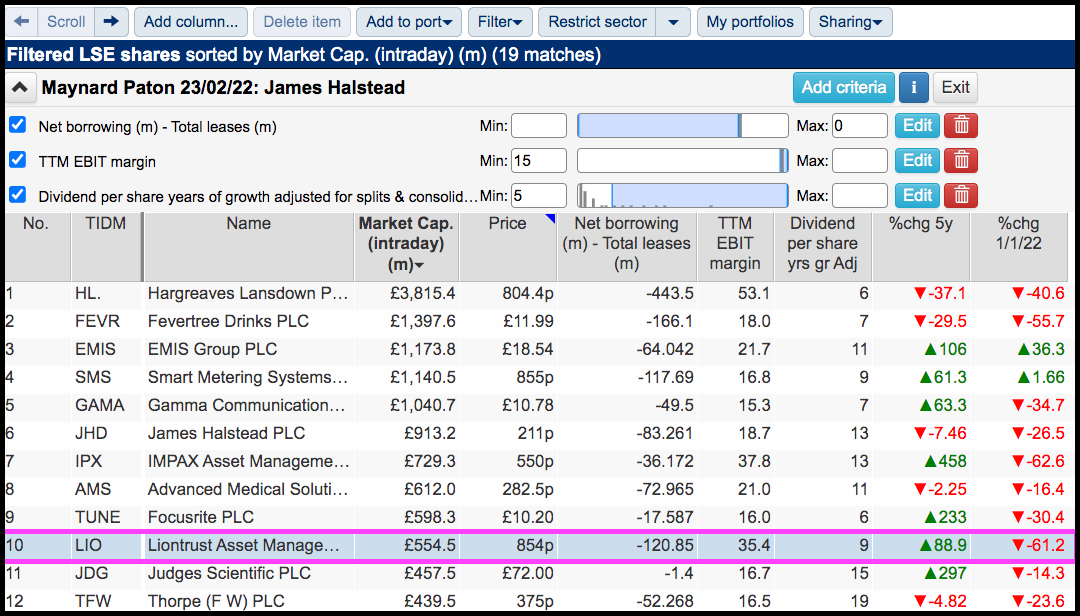 (You can run this screen for yourself by selecting the “Maynard Paton 23/02/22: James Halstead” filter within SharePad’s Filter Library. My instructions show you how.)

The reaction of Liontrust’s share price — which will be seen by the teenage scribblers in the City as high beta — is symptomatic of current market sentiment. As a result, the shares trade on a trailing free cash flow yield of 15% and a trailing dividend yield of 8%. Talk about ‘value’.” 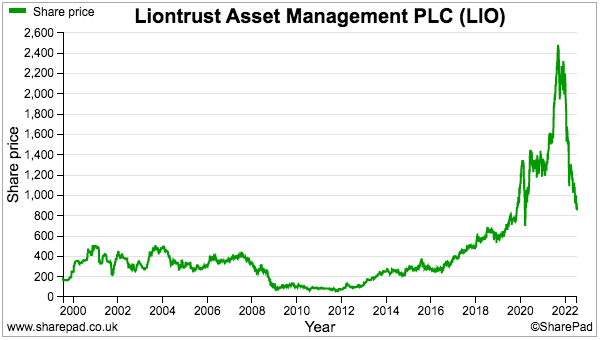 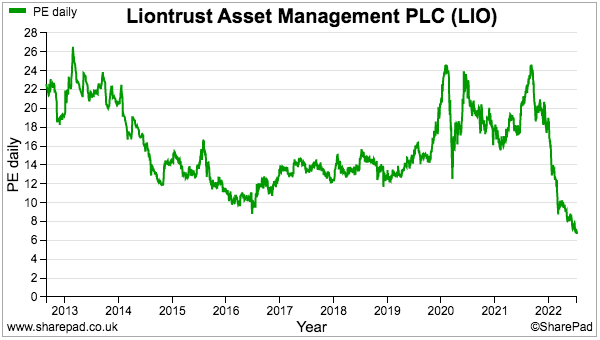 …and a trailing dividend yield beyond 8%: 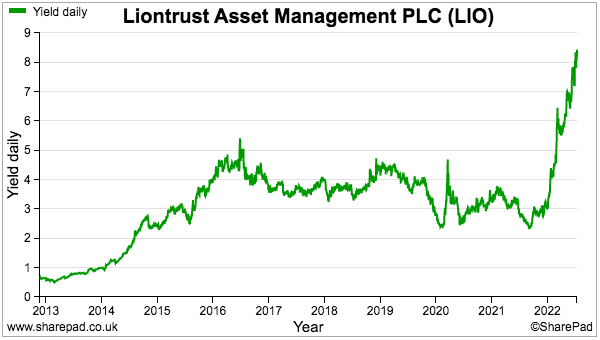 The history of Liontrust Asset Management

Liontrust was established during 1996 and is now a prominent name within the fund-management industry. Last year the group boasted a top-five position based on fund sales to ordinary UK investors:

Liontrust’s best-known fund is probably Liontrust Special Situations, which “aims to deliver capital growth over the long term (5 years or more) through… companies with a durable competitive advantage that allows them to defy industry competition and sustain a higher-than-average level of profitability for longer than expected.”

The Special Situations fund presently manages approximately £5 billion and remains led by Anthony Cross, who joined Liontrust during 1997 and employs what he calls the ‘Economic Advantage’ process.

Key characteristics sought by Mr Cross are “intellectual property, strong distribution channels [and] significant recurring business”, and top holdings within the Special Situations fund include RELX, GSK and Diageo. The fund has performed well since its 2005 launch: 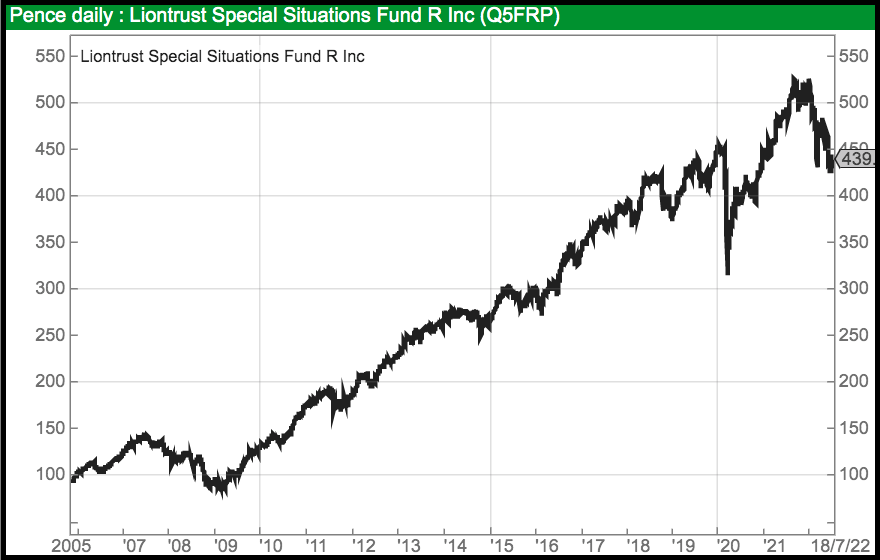 Mr Cross also manages the £1 billion Liontrust UK Smaller Companies fund, which holds names such as Judges Scientific, Smart Metering Services and YouGov. As well as strong company fundamentals, this fund insists on management teams owning minimum 3% shareholdings. The performance since the 1998 launch has been positive, too: 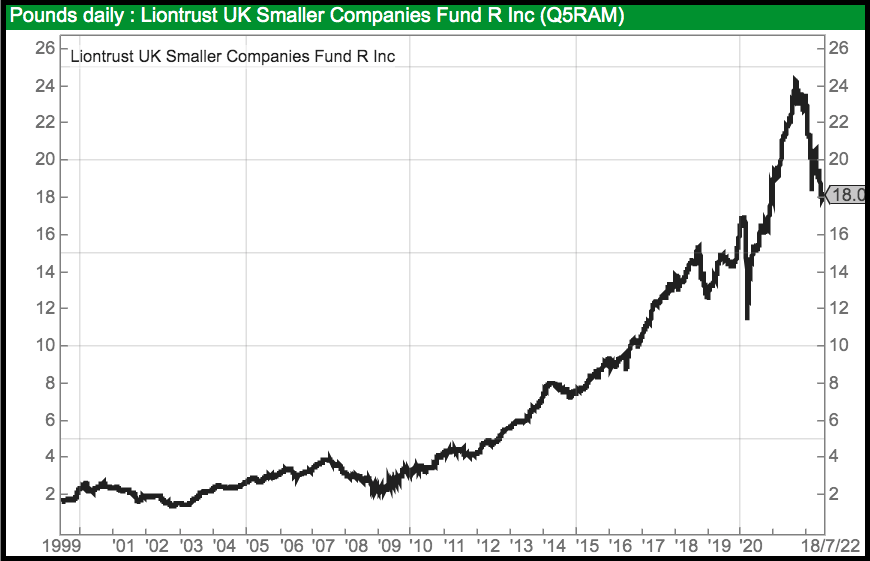 The adept stock-picking has helped attract further money to Mr Cross’ funds; the Economic Advantage approach managed only £245m during 2010 but by 2022 was handling £9 billion (red bars below): 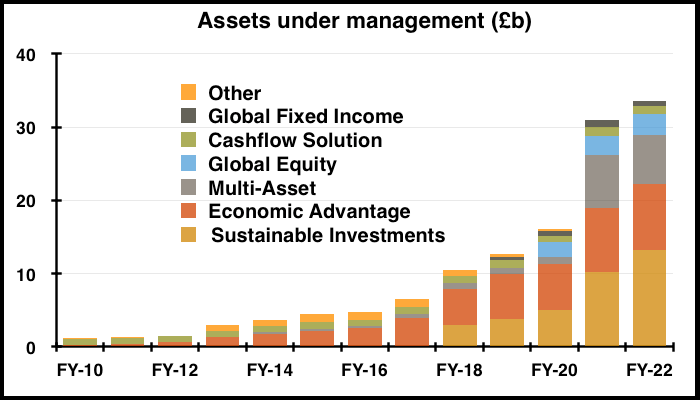 In fact, total assets under management soared from £1 billion to £34 billion during those same twelve years as higher profits were reinvested in various acquisitions to diversify Liontrust’s fund range.

The purchase of Alliance and its collection of ‘Sustainable Investments’ funds now looks a particularly perceptive deal given the subsequent trend towards ‘ESG’ investing. Such funds represented 39% (£13 billion) of total client money at Liontrust’s 2022 year-end.

Bear in mind that Liontrust’s progress has not always been straightforward. The group’s early progress became somewhat dependent on fund manager Jeremy Lang, whose stock-picking approach was to “identify shares with the greatest likelihood to surprise investors positively with their results“.

Mr Lang certainly surprised Liontrust during 2009 when he announced his resignation. Fund holders withdrew more than £2 billion in response and, coupled with the banking crash, the group’s assets under management collapsed from almost £5 billion to £1 billion: 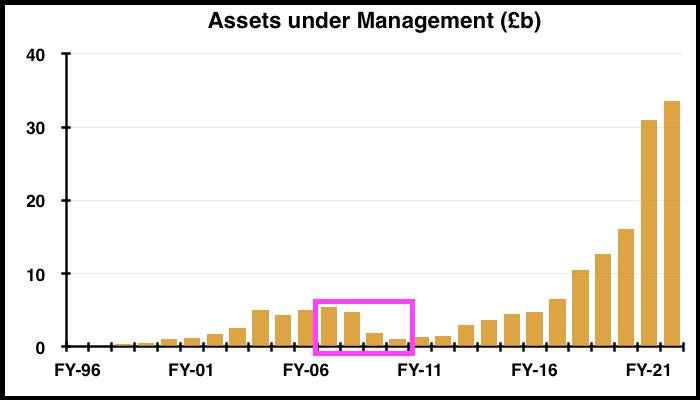 Profits then turned to losses and the dividend was scrapped for a few years: 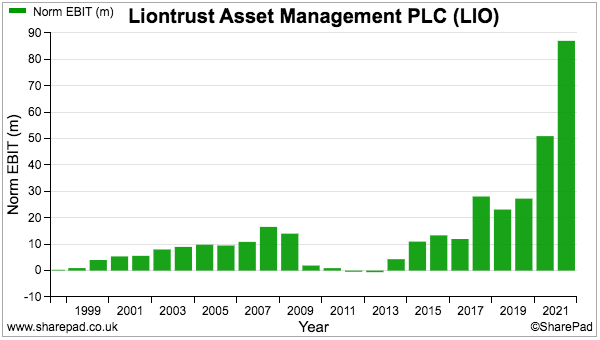 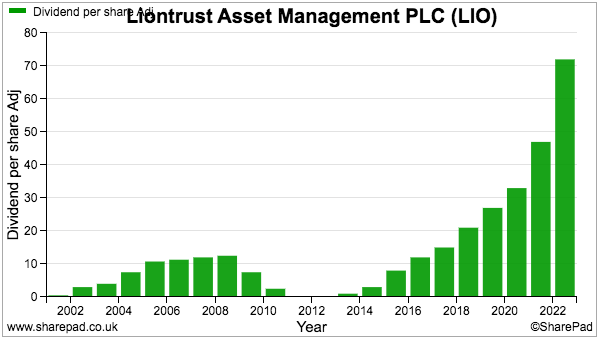 But the aforementioned Mr Ashworth-Lord saw a buying opportunity and, according to this interview with the Telegraph, purchased Liontrust at 70p during 2011. The shares had joined the stock market twelve years earlier at 115p and briefly surpassed £24 during 2021.

This chart shows how Liontrust’s assets under management have advanced since the difficulties of 2010: 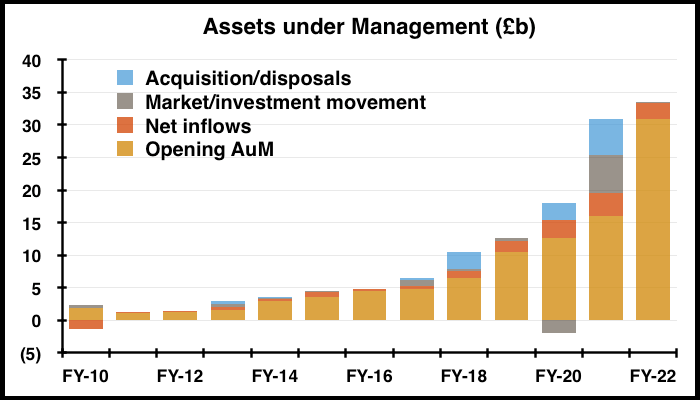 Notice the net inflows of new client money (red bars) becoming relatively larger compared to the assets under management at the start of each year (orange bars).

In fact, clients kept on investing throughout the Brexit and pandemic volatility… 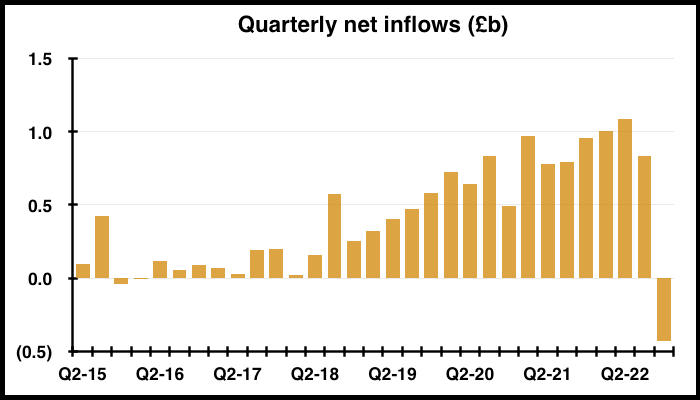 … with new money being given to Liontrust for 26 consecutive quarters and the amount eventually rising to £1 billion every three months.

Incoming client money is often correlated to strong investment performance, and the returns Liontrust’s fund holders have received can be deduced from the group’s updates.

During 2022 for example, investment performances added £131 million to the assets of £30.9 billion seen at the start of the year: 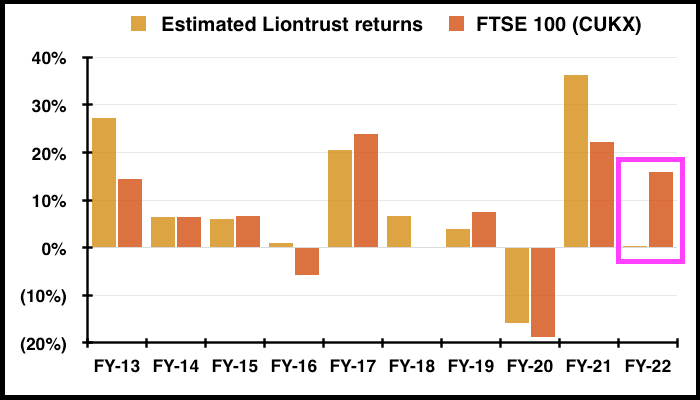 True, Liontrust’s funds have more often than not out-performed the FTSE 100. And true, the latest annual report boasts of 60%-plus of client money being held in first-quartile funds.

But the de-rating of many ‘growth’ shares during the last year — combined with the remarkably resilient performance of the FTSE 100 — has started to create some uncomfortable relative performances.

In fact, Liontrust’s website shows only four ‘primary class’ funds out of more than 70 beating the 9% total return from the FTSE 100 during the last twelve months:

The worry for shareholders is simple: clients may not be too convinced of first-quartile performances if they can see a cheap FTSE 100 tracker marching ahead while their Liontrust funds continue to flounder.

One measure that Liontrust does not really highlight is the percentage fee earned from its funds. Slide 27 of the 2022 presentation reveals a ‘revenue margin’ of 0.63%:

Standard practice among quoted fund managers is to report such fee margins as a matter of course within their results commentary. The other fund managers I have covered for SharePad — Ashmore, Impax Asset Management, Jupiter Fund Management and Polar Capital — certainly adhere to this practice.

My calculations for Liontrust — which include performance fees but are net of sales commissions — suggest the client money attracted during recent years does not pay as high a fee as client money received some years before: 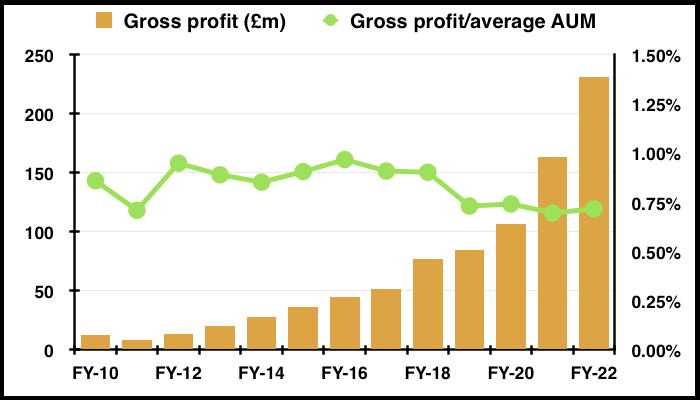 A skim through my custom SharePad charts does not show anything too untoward with Liontrusts’s financials.

Barring the difficult years following Jeremy Lang’s departure, Liontrust has typically converted a healthy 30% or more of revenue into profit: 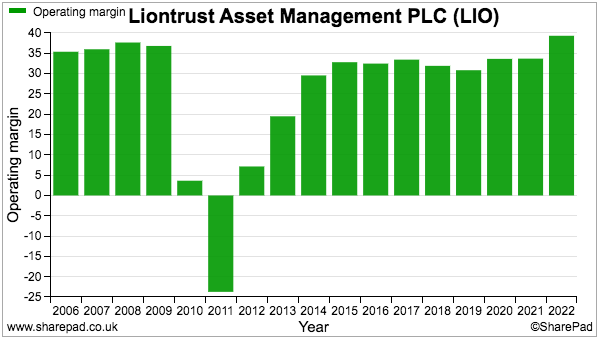 Return on equity has likewise appeared robust at 30% or so aside from those difficult years: 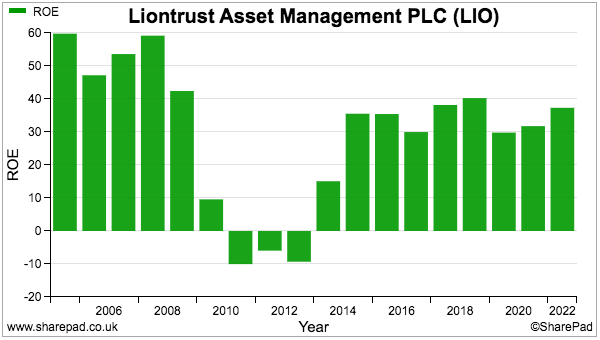 Those returns on equity are all the more impressive given the cash position (which earns minimal interest) has mounted up to represent two-thirds of the balance sheet at the 2022 year end: 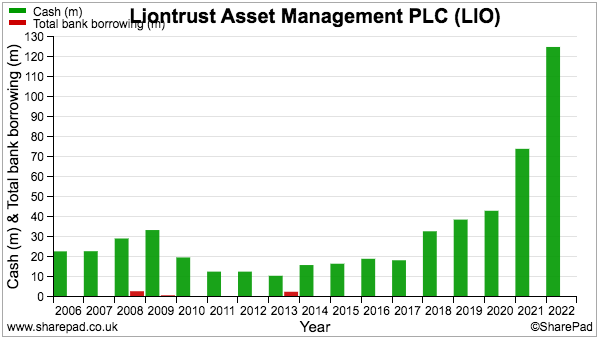 The bumper cash pile is a result of useful cash conversion, which SharePad says has averaged 89% during the last five years: 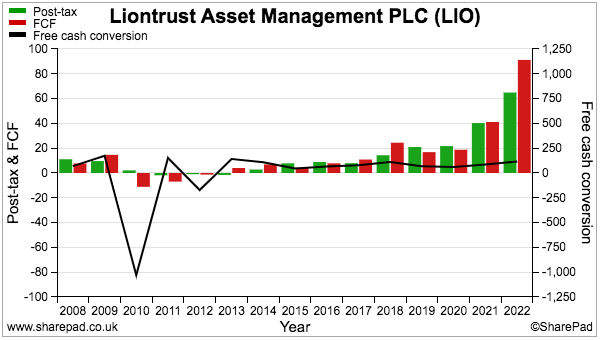 Something to consider with Liontrust’s financials are the regular adjustments to reported profits. In particular, “professional services” or similar have been recorded every year since at least 2011: 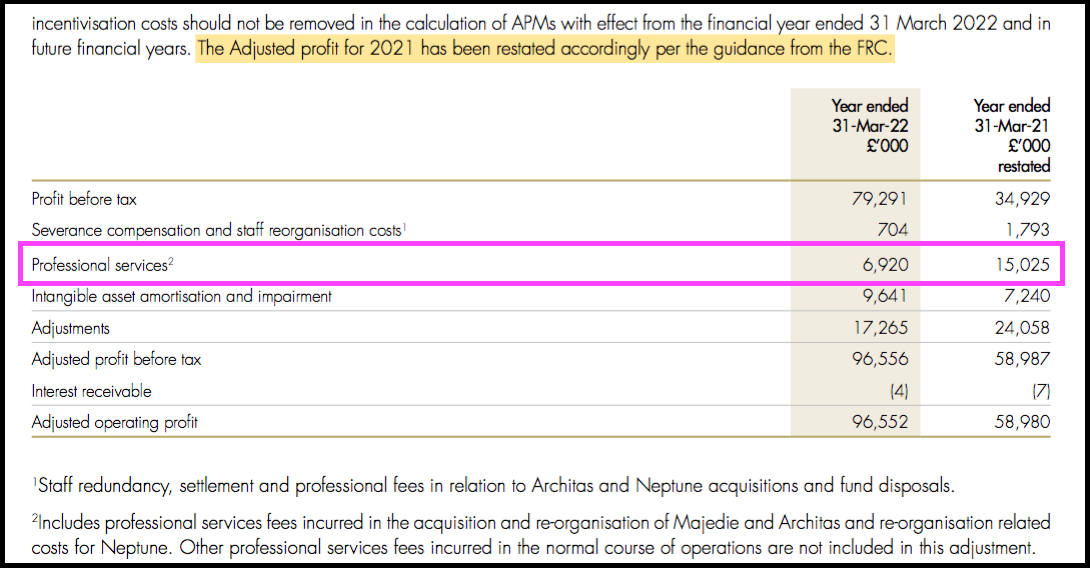 During the last five years, such “professional services” have totalled £37 million — equivalent to a substantial 15% of Liontrust’s aggregate adjusted operating profit for the same period.

The 2022 annual report also owns up to the Financial Reporting Council (FRC) “requesting information to give… a better understanding of the accounting for share-based payments in our 31 March 2021 annual report.”

Share-based payments (as well as depreciation, IFRS 16 lease costs and a few other items) were included within the 2021 adjustments but were then treated as standard expenses for 2022.

Other annual report small-print reveals a difference of opinion with the auditor concerning the goodwill and intangible assets created following the Architas acquisition: 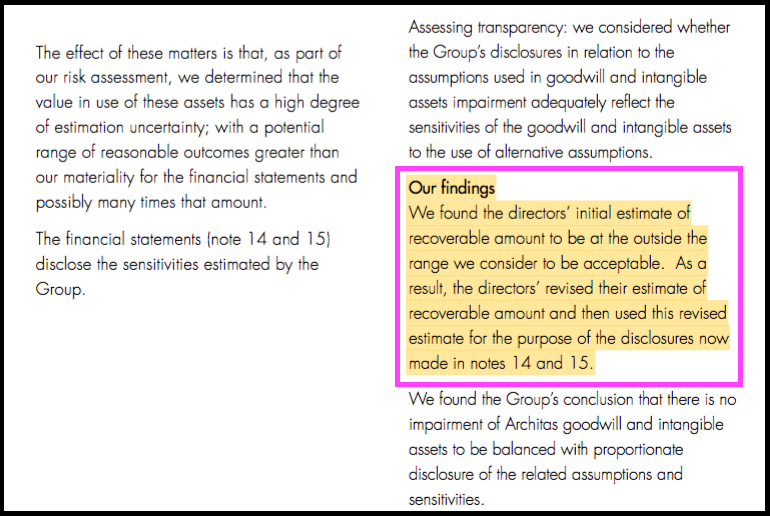 KPMG reckoned Liontrust’s initial calculations were too optimistic, and other small-print disclosed “net margins and net sales had not performed as strongly as originally forecast” at Architas:

Liontrust’s revised intangible calculation of £48 million left leeway of only £2 million before a write-down could have been necessary. Architas may therefore be the acquisition most likely to disappoint should wider market conditions deteriorate from here.

John Ions became chief executive during 2011 and must be credited with navigating the business through those difficult years and then overseeing the rapid expansion witnessed from 2014.

Vinay Abrol meanwhile added the duties of chief financial officer to his role of chief operating officer during 2005.

Mr Abrol has an IT background as his annual-report biography does not suggest he is a qualified accountant. Maybe a CFO with greater accounting experience could have sidestepped that FRC enquiry and audit disagreement:

As you might expect at a City business, executive pay is not exactly ‘thin cat’. The chief exec has for example collected a hefty £24 million through salaries, bonuses and LTIPs during the last five years.

A vote on revised director remuneration did not go down well earlier this year; 46% of shareholders voted against higher salaries, different bonus formulae and further LTIPs. (The annual report also admitted the two weeks’ notice given for the vote had caused “disquiet” among investors.)

And you might like to know the board’s £15 million collective shareholding does not meet the minimum 3% ownership that Mr Cross requires for his UK Smaller Companies Fund:

The high and rising wages may well reflect the economies of scale of a successful fund-management business. Client money per employee has grown eight-fold to £165 million during the last decade or so: 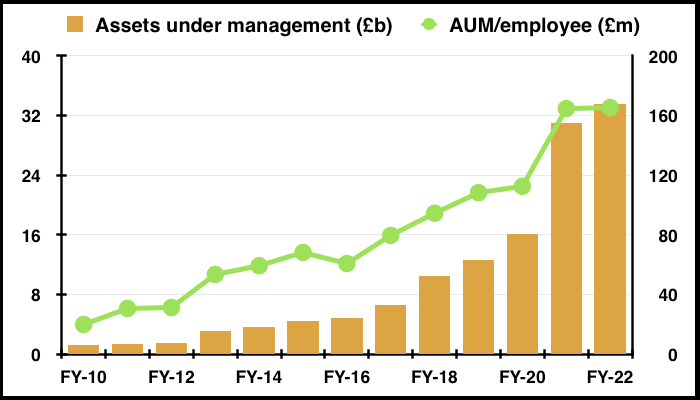 Revenue per employee has improved likewise to beyond £1 million to cover the greater pay: 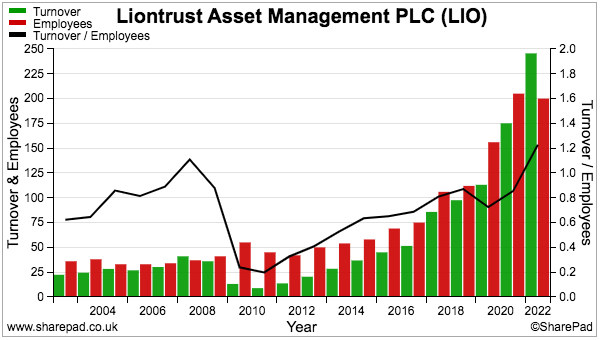 A trading update last week owned up to further client withdrawals and a thumping £3.9 billion wiped from the value of the group’s funds: 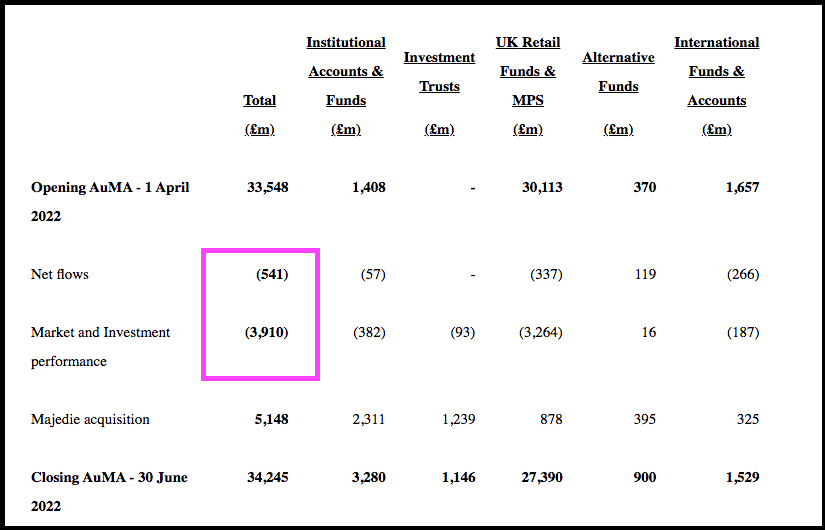 The announcement confirmed that, between January and June this year, client outflows had reached £1 billion while the value of the funds had dropped by £7 billion — or close to 20%.

The FTSE 100 by contrast fell by only 1% during the same six months, and for now, remains frustratingly hard for Liontrust’s stock-pickers to beat.

Mind you, total client money of £34 billion — bolstered by the Majedie acquisition that brought in £5 billion — remains greater than the client money held throughout the previous financial year.

Liontrust’s near-term revenue and profit may therefore not be too dissimilar from the annual results issued during May… assuming there is:

City forecasts within SharePad indicate earnings will continue to cover the 72p per share dividend and support the 8% yield anticipated by Mr Ashworth-Lord:

And even if the performance of Liontrust’s funds deteriorates and earnings are squeezed more than expected, the bumper cash position could be tapped to shore up the payout.

Still, the opportunity to collect an 8% income from this cash-rich business deserves your attention… and the opportunity could be compelling if you are convinced Liontrust’s funds will eventually recover and new client money then comes flooding back

Maynard writes about his portfolio at maynardpaton.com. He does not own shares in Liontrust Asset Management.