Screening For My Next Long-Term Winner: Impax Asset Management

Everybody loves shares that keep going up.

SharePad lists 167 names that have consistently delivered 15% or more annualised returns during the last five years: 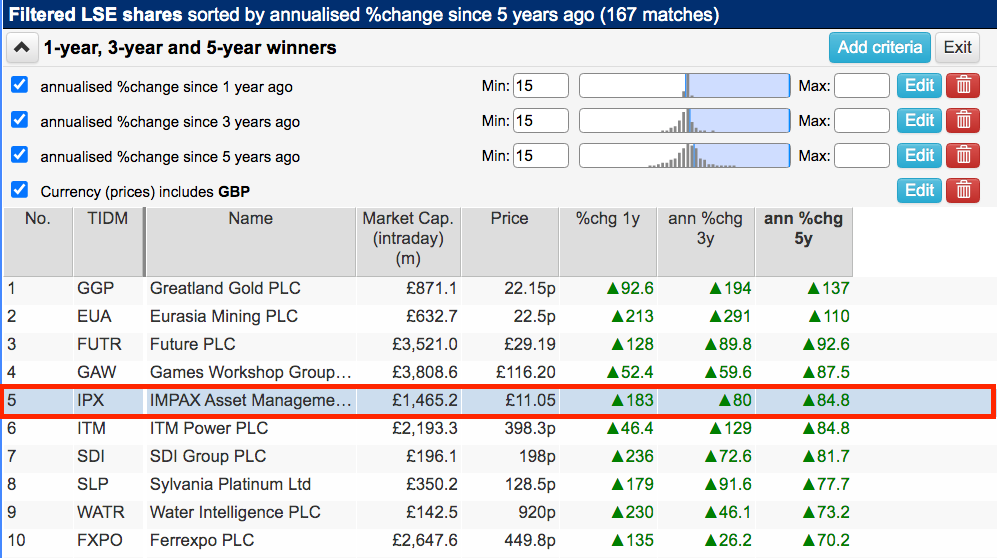 (You can run this screen for yourself by selecting the “Maynard Paton 11/06/21: Impax Asset Management” filter within SharePad’s impressive Filter Library. My instructions show you how.)

The shares of fund manager Impax Asset Management have certainly kept going up; they have almost tripled during the last twelve months and have 20-bagged since 2016.

The winning combination appears to have been:

What is ‘sustainable investing’?

Founder Ian Simm once told Funds Europe that the inspiration for Impax was a 1987 United Nations report called Our Common Future.

“I remember being particularly captivated by the book, which looks at the problems facing the environment and human habitation as a result of economic growth,” explained Mr Simm.

“The book coined the term ‘sustainable development’ and I became really fascinated by how the private sector could help to solve environmental problems.”

Mr Simm went on to establish Impax during 1998 and the first fund he managed was a £15 million mandate for the International Finance Corporation.

Two decades on, and Impax’s funds under management have soared beyond £20 billion as the group’s ‘sustainable investment’ approach has gone from obscure niche to mainstream practice: 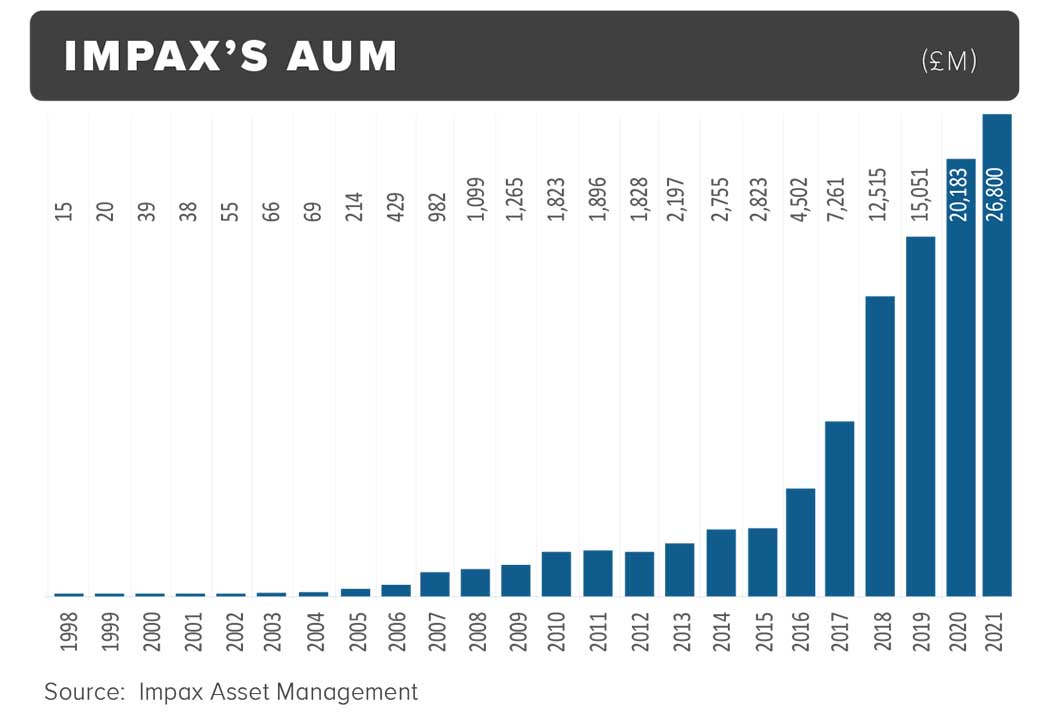 According to Impax, “capital markets will be shaped profoundly by global sustainability challenges, particularly:

The group also claims its investment decisions are enhanced by including environmental, social and governance (ESG) factors into its analysis process.

Impax might be best known for Impax Environmental Markets (IEM), a £1.3 billion investment trust that owns a range of overseas stocks involved in forestry, waste disposal, animal-feed nutrients and software for ‘smart farms’: 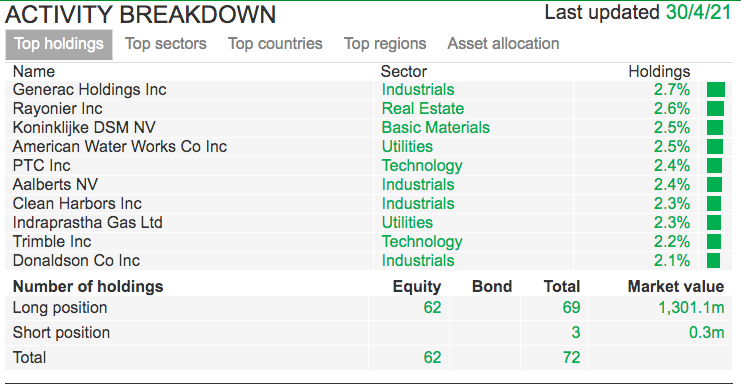 Fund manager Bruce Jenkyn-Jones has co-run IEM since its 2002 launch and loyal investors have seen the trust’s shares climb more than four-fold: 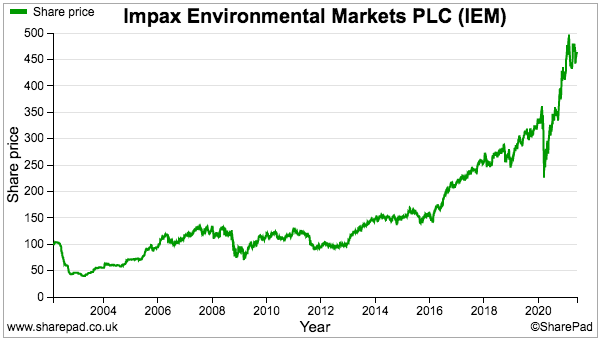 Note that IEM is not backing blue-sky ventures; the trust’s 2020 annual report said only 1% of its holdings had yet to reach profitability. IEM’s largest position, Generac Holdings, in fact offers some impressive ‘quality’ ratios: 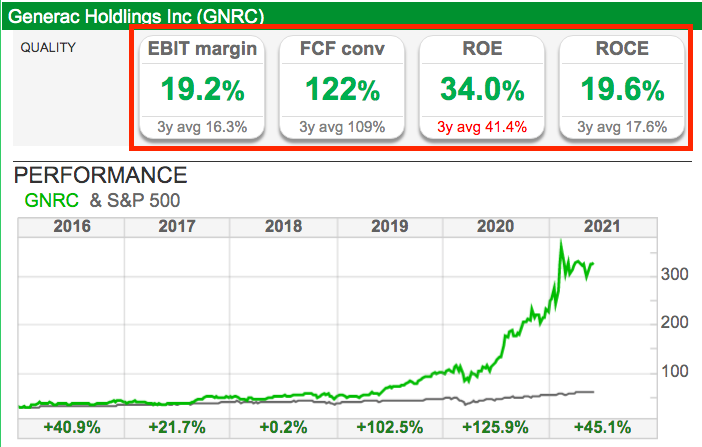 IEM is part of Impax’s ‘Specialists’ strategy, which concentrates on smaller and medium-sized companies that derive at least 50% of their revenue from environmentally positive activities.

Impax’s ‘Leaders’ strategy meanwhile focuses on larger companies, which derive at least 20% of their revenue from similar ‘green’ activities:

Such Specialists and Leaders funds represent 37% of Impax’s total funds under management. A further 18% is invested in companies involved in the treatment and/or supply of water.

An irony from Impax’s history is its route to going public. During 2001 the company effectively reversed into Kern River, which at the time operated two sub-scale oilfields in the United States. 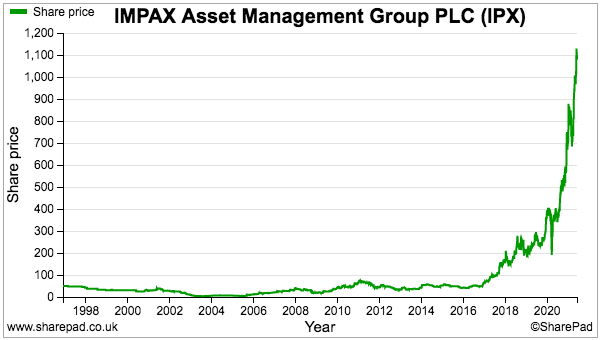 The price rarely troubled 60p before suddenly taking off during late 2016. The recent £11 supports a near £1.5 billion market cap.

Those spotting the buying opportunity included ace Sharepad writer Bruce Packard, who picked up a few at 43p five years ago: “I bought in April 2016 when a funds under management update showed inflows for the first three months of +16% to £3.5 billion.“

My chart below shows how 2016 was a turning point for Impax: 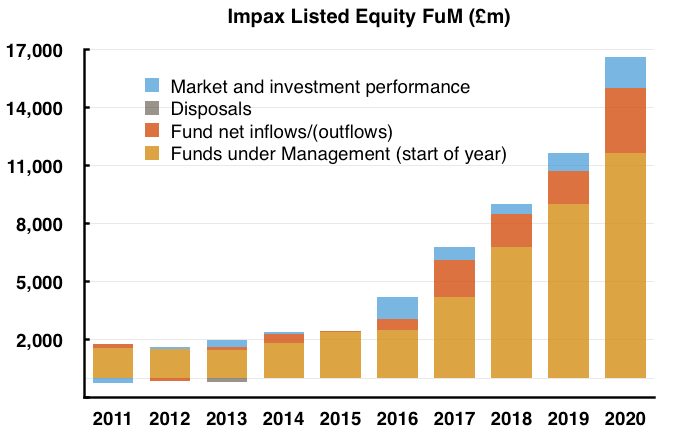 For perspective, the same ratio for Polar Capital Management (reviewed here) since 2016 has ranged between minus 9% to 21% and averaged less than 5%… 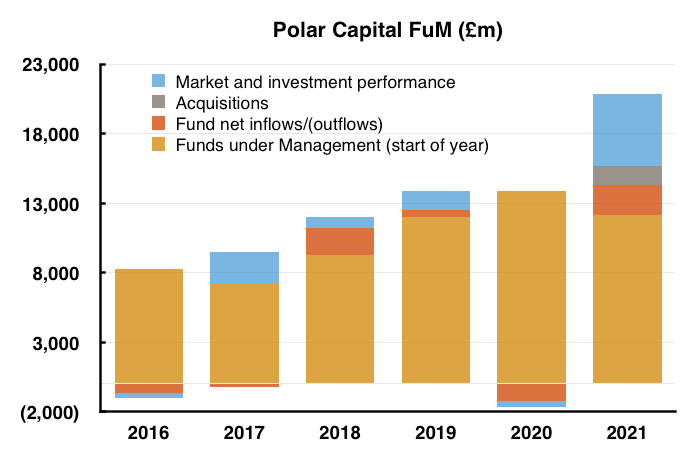 …while for Jupiter Asset Management (reviewed here) the ratio has ranged between minus 11% and 14% and has averaged minus 2%: 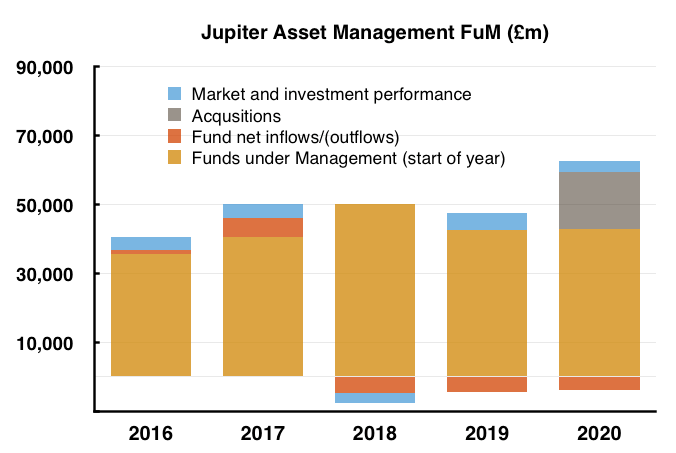 Impax’s greater funds under management have demonstrated the attractive ‘scalability’ of the business. 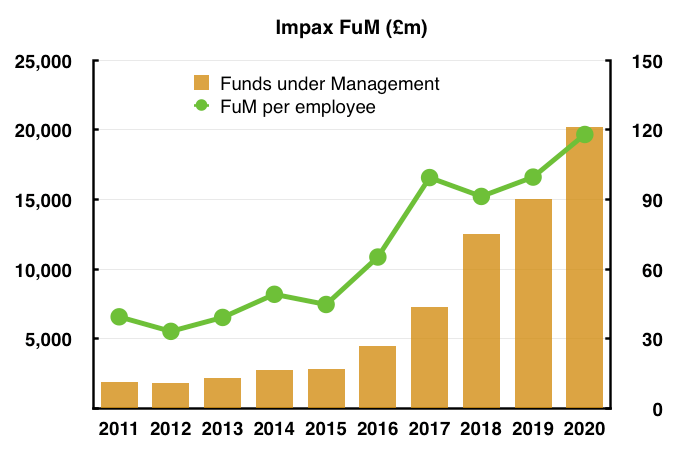 The expanded funds under management have translated into greater revenue… 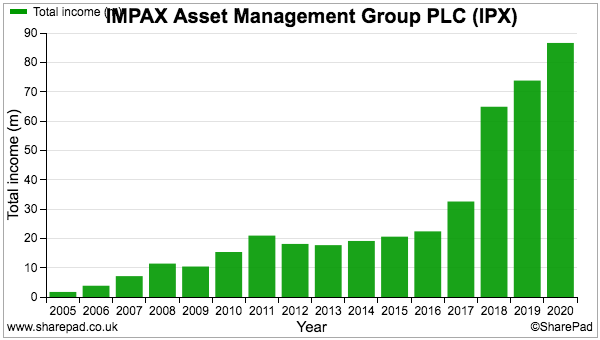 … and greater profit, albeit with some ups and downs: 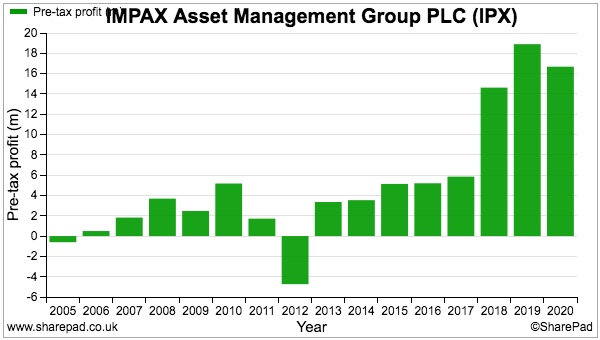 The loss for 2012 was caused by costs associated with a staff incentive scheme, while the lower reported profit for 2020 was due to greater National Insurance payable on share awards.

The balance sheet is very healthy, with no bank debt and total cash of more than £30 million and “available” cash of close to £15 million:

A check of SharePad’s Directors’ Dealings (DD) tab provides clues as to why Impax has prospered:

The aforementioned Ian Simm remains in charge as chief executive and continues to enjoy a 7% shareholding that is now worth £105 million.

Mr Simm has commendably left his shareholding untouched during the last ten years and presently collects annual dividends of £1 million.

With the benefit of hindsight, Mr Simm’s role as company founder, his notable shareholding alongside a dedication to a particular business theme created a powerful combination for long-term investors.

Other ‘insider’ shareholders include Keith Falconer, Impax’s chairman from 2004 to 2020, who boasts a 5%/£56 million stake, and IEM manager Mr Jenkyn-Jones, who owns a 3%/£44 million position.

Another notable shareholder on the SharePad list is BNP Paribas, which acquired 28% of Impax at 35p a share during 2007. At the same time, the French bank agreed to distribute Impax’s funds to clients throughout Europe and Asia.

Looking back, BNP buying 28% was a signal the Impax arrangement would become very lucrative for both parties.

BNP reduced its stake by 40% last year at 510p, but continues to have almost £190 million riding on the share price. BNP replacing Impax with another fund manager seems unlikely given the value of the retained holding.

Interestingly enough, Impax’s board includes a BNP representative as a non-exec but does not include the financial director. And two out of the seven board members (including the non-exec chair) are female, which should be important to Impax for its own ESG matters.

Note that Impax has recently launched a “Women’s Select” fund that invests in companies with “gender-diverse boards and senior leadership teams”.

But the company is not there yet with gender diversity among its own stock pickers: 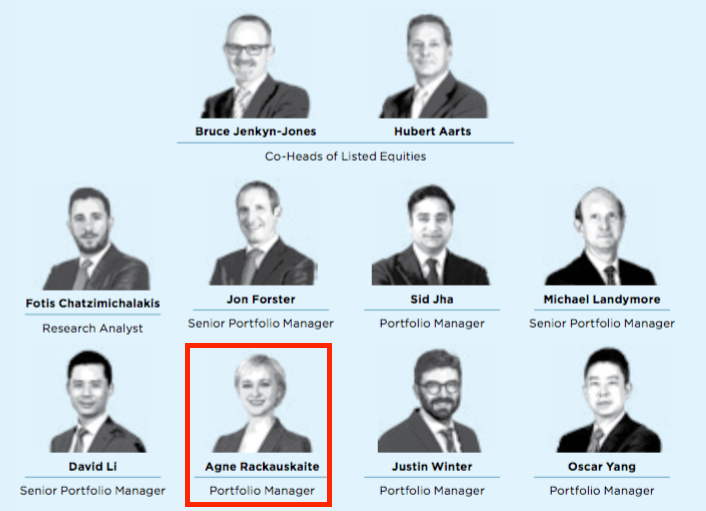 Bear in the mind the returns Impax highlights exclude fees. The presentation small-print…

…divulges the returns net of fees that the end customer receives.

My chart below compares the ten-year returns from Impax’s three leading strategies (net of fees) to the group’s MSCI benchmark: 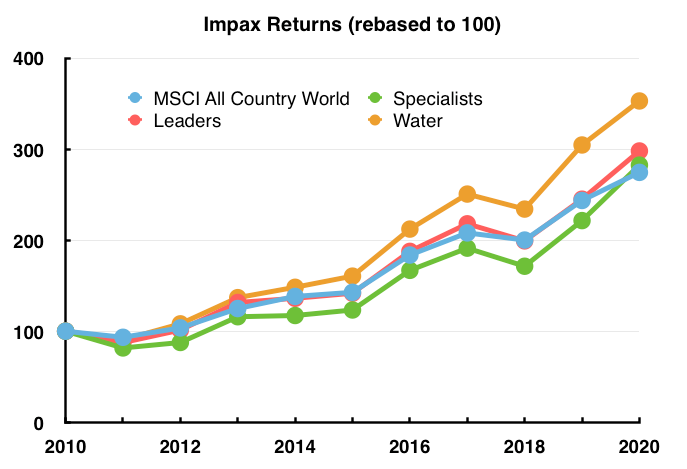 True, Impax’s returns have outperformed, but they have not completely trounced the global index (blue line). The faith of clients and their ‘green’ mandates could be tested if Impax’s returns start trailing a low-cost tracker.

Impax seems to have reduced its fees for new clients. Revenue as a proportion of funds under management has dropped from 1%-plus to 0.5% since 2011 (green line, right axis): 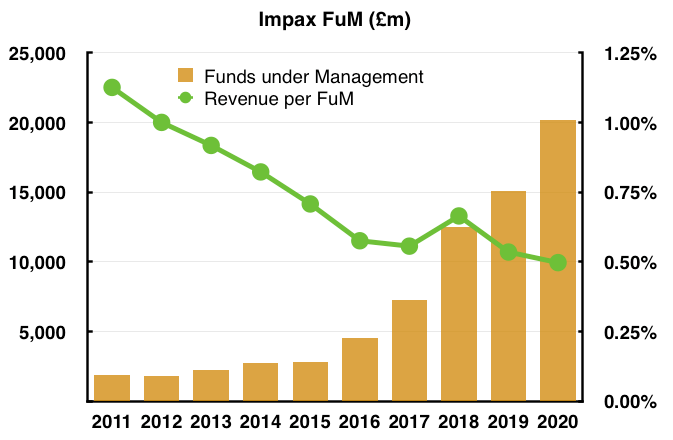 But lower fees may not be a problem, assuming Impax continues to attract sizeable new mandates and the aforementioned ‘scalability’ of the business remains in place.

Impax’s progress was bolstered by the purchase of a US asset manager during 2017 with client funds of $3.5 billion.

The initial £31 million payment was certainly significant — Impax’s underlying earnings were £8 million at the time — and the early signs were not convincing.

Impax’s 2019 results admitted client withdrawals at the US subsidiary had prompted a lower-than-expected divisional profit, and the subsequent performance-related payment to the majority vendors amounted to just $270,000 out of a maximum $31 million.

Results, valuation and finding another 20-bagger

Rising markets and almost £7 billion of new client money pushed revenue 50% higher, which in turn led to profit surging 80% and the dividend doubling.

SharePad confirms the £11 shares trade at a 40x multiple: 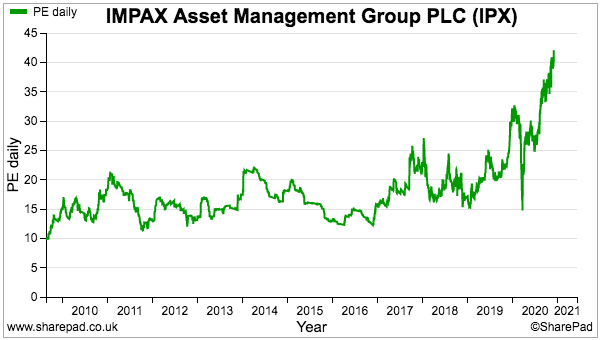 Note that the P/E was a modest 13x or so back in 2016 when Bruce bought at 43p. The subsequent re-rating to 40x therefore helped turbo-charge the share price and deliver that 20-bagger return.

A similar re-rating from 40x feels very unlikely for the next five years, but at least current shareholders have Impax’s progress from the last five years to rely on.

I am hopeful the clues from Impax alongside SharePad’s vast database can now help me find a 20-bagger. I would welcome any suggestions for ‘the next Impax’ in the comments below.

Maynard writes about his portfolio at maynardpaton.com and hosts an investment discussion forum at quidisq.com. He does not own shares in Impax Asset Management.

2 comments on Screening For My Next Long-Term Winner: Impax Asset Management