Screening For My Next Long-Term Winner: Dotdigital 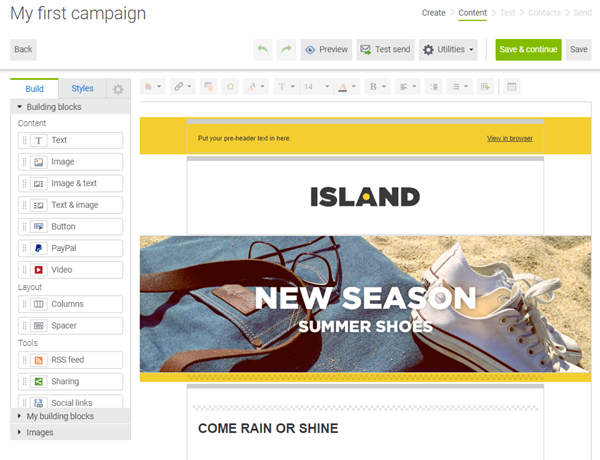 Today I have returned to the share screen I employed to pinpoint Victrex earlier this year.

Any business with a margin and ROE consistently above 20% is probably quite special.

To narrow the field down further, I also sought companies that carried net borrowings of less than zero (i.e. net cash): 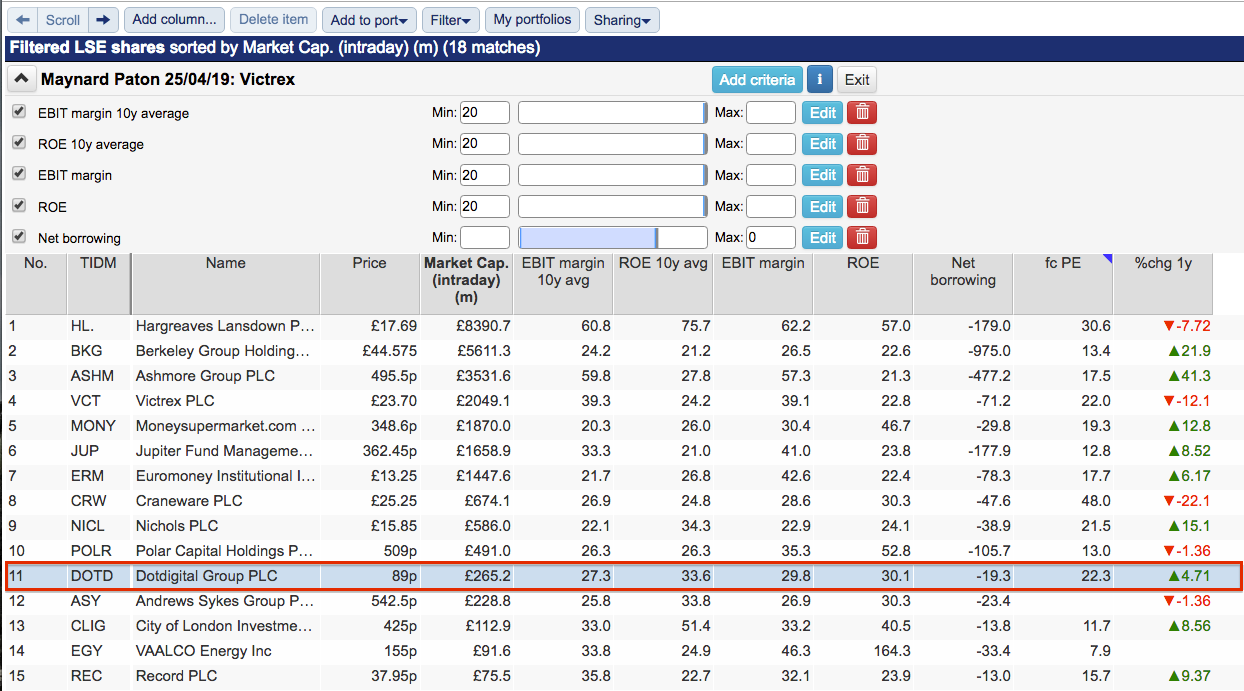 (You can run this screen for yourself by selecting the “Maynard Paton 25/04/19: Victrex” filter within SharePad’s vibrant Filter Library. My instructions show you how.)

SharePad returned only 18 companies, including a number of shares I have studied previously: Hargreaves Lansdown, Jupiter Fund Management and Craneware. The screen continues to show Victrex, too.

I decided to evaluate Dotdigital, a £265 million AIM-quoted developer of email management software. 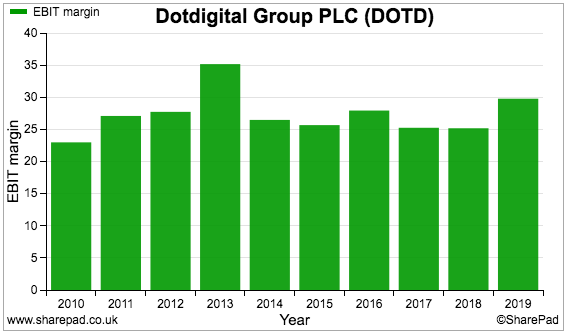 The operating margin has almost always exceeded 25% and occasionally nudged 30%. Such high profitability indicates a strong competitive position and/or wonderful economies of scale.

Dotdigital’s ROE during 2010 and 2011 were favourably influenced by one-off gains and a change of year end. Nonetheless, ROE has commendably remained above 25% since 2012: 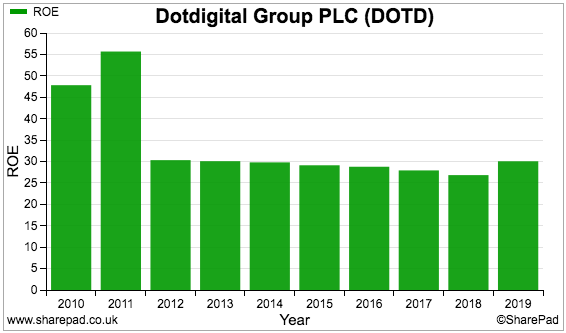 Let’s now take a closer look at the company.

The business of Dotdigital

If you have recently received an email from JD Sports, Superdry, Screwfix, Jack Wills — or even Tottenham Hotspur — then you may have already experienced the services of Dotdigital.

The likes of JD Sports — alongside a few thousand other clients — employ Dotdigital’s software to design, manage and send their email marketing campaigns.

The software — initially called ‘dotmailer’ — was developed originally during 2001 for the BBC. These days the system helps marketing departments build and automate complex email ‘workflows’: 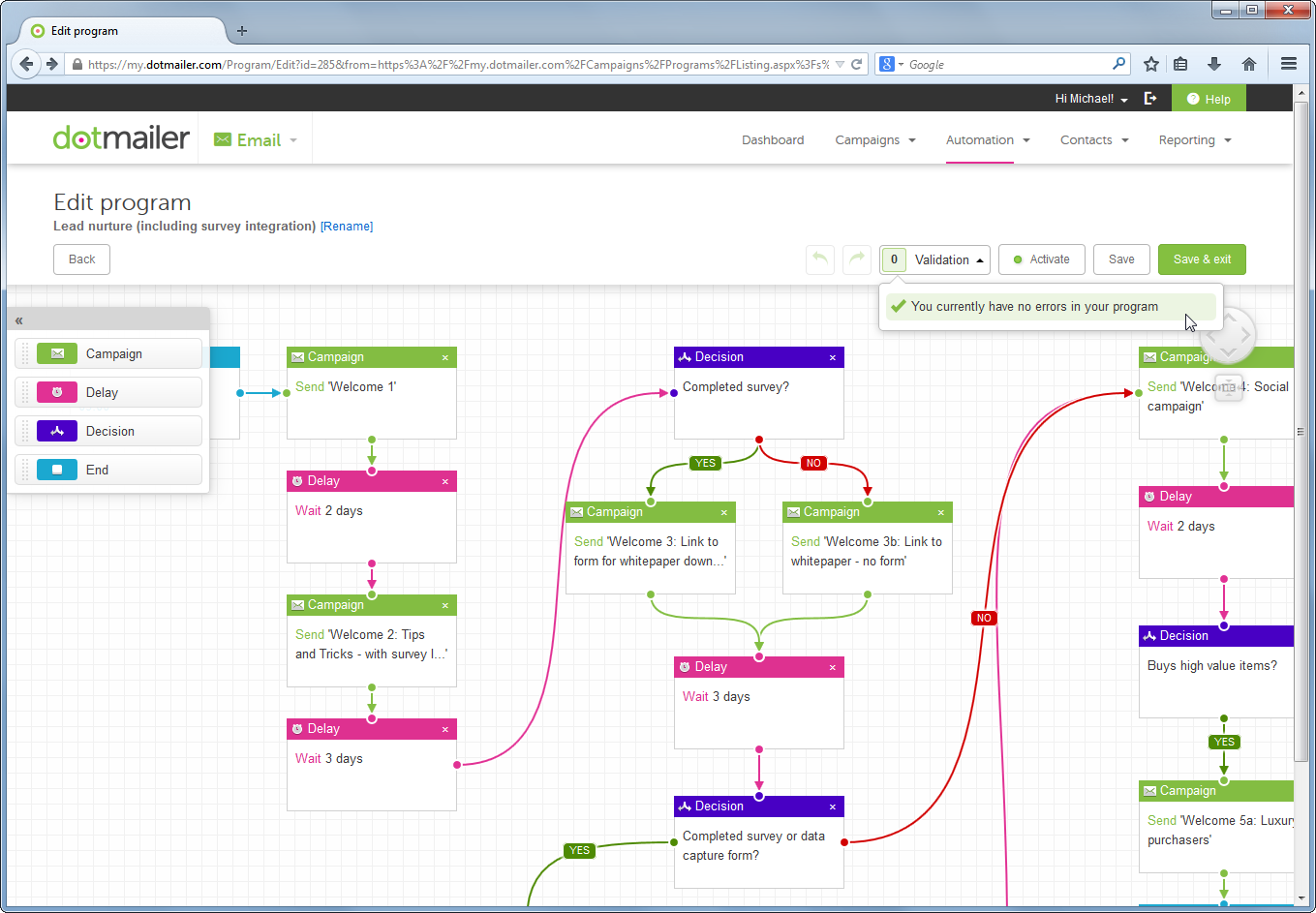 A very simple workflow could be signing up to a website’s newsletter. Dotdigital’s software sends a welcome email, and depending on whether the recipient opens the email or not dictates the content of the next email sent.

By sending emails with greater relevance — rather than simply spamming everyone with the same message — marketing departments can improve the ‘engagement’ of their email lists, and therefore encourage additional online sales.

The average customer pays Dotdigitial almost £1,000 a month — more than double the expenditure of five years ago: 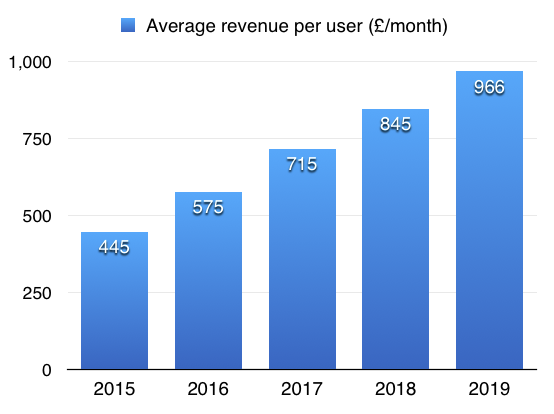 An acquisition in 2017 allowed Dotdigital to broaden its services to include text messages, social-media ads and chat systems.

Payments from Magento users run at an average £1,500 a month, and support 28% of total group turnover. Income from similar e-commerce integrations support a further 20%.

Dotdigital describes 86% of total revenue as “recurring”, with a “high proportion” of customers having signed one-, two- or three-year contracts.

Rising client numbers alongside greater income from each client have delivered an appealing growth record. The revenue and profit charts are shown below: 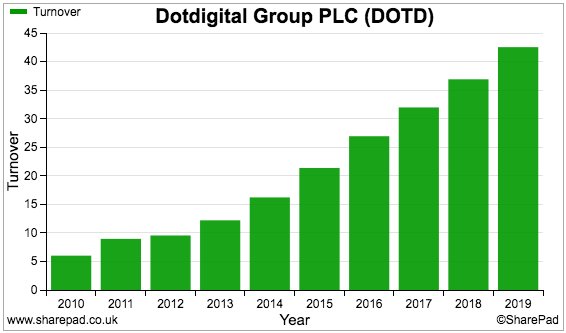 The share price has tracked the financials higher. Investors who bought at 10 pence when the firm joined AIM currently boast a nine-fold gain: 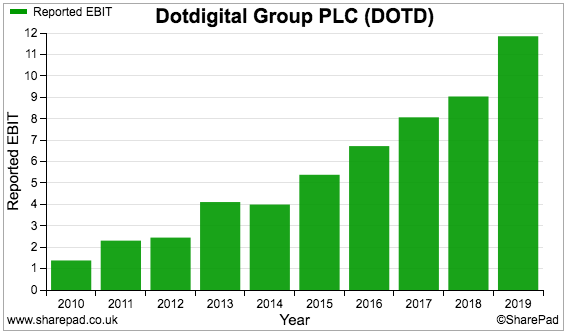 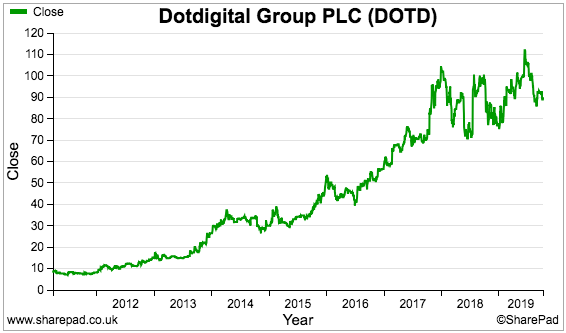 The ordinary dividend has marched higher, too: 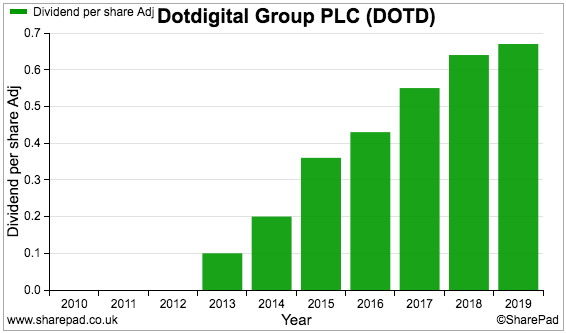 SharePad also reveals a special payout was paid during 2017: 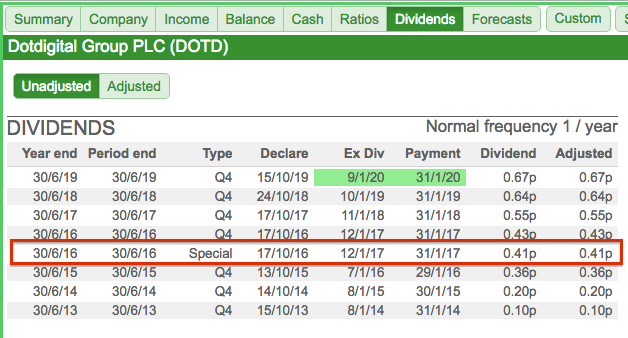 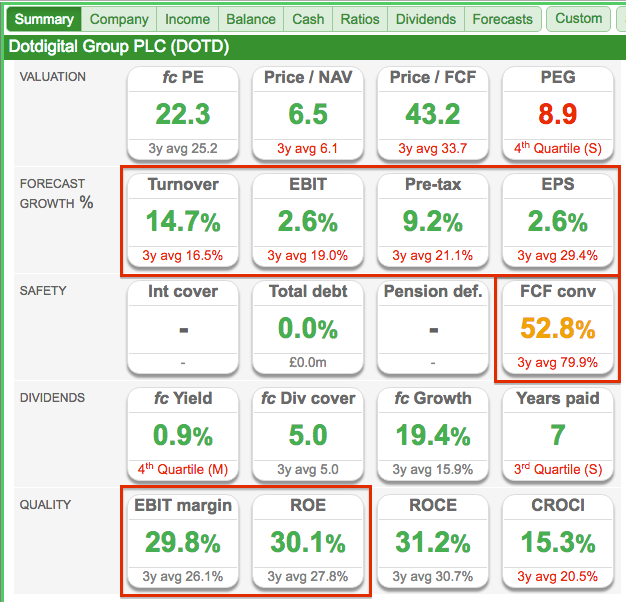 The points of interest:

Dotdigital’s cash conversion percentage (black line, right axis) is not as high as I had expected: 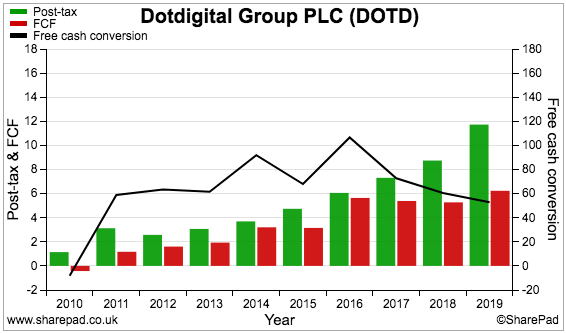 Software businesses with customers paying upfront for services really ought to have cash conversion ratios close to 100% or more (Craneware is a good example).

This next chart compares Dotdigital’s earnings to working-capital cash movements (red bars) and capital expenditure over and above the depreciation and amortisation charged against earnings (blue bars): 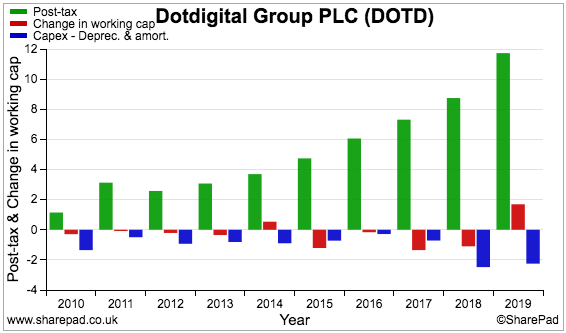 The purchased intangibles actually reflect the ‘capitalisation’ of development costs.

Similar to many software businesses, Dotdigital capitalises certain development costs onto the balance sheet rather than charge them immediately against reported earnings.

The capitalised costs are then expensed against earnings during future years through an amortisation charge. The relevant accounting note is shown below:

Investors have to be vigilant with this sort of accounting.

You see, hefty intangible development costs alongside tiny amortisation charges can flatter reported earnings and give an optimistic impression of profit versus the actual cash costs.

My spreadsheet below summarises Dotdigital’s intangible development costs and the associated amortisation:

(All figures in £thousands)

During the past five years, Dotdigital has diverted development costs totalling £15 million away from the income statement and onto the balance sheet.

The total five-year difference is £6 million, which is not insignificant given Dotdigital’s aggregate pre-exceptional operating profit during the same time was £40 million.

Staying with the annual report, the cash flow statement includes an IFRS 15 ‘reclassification’: 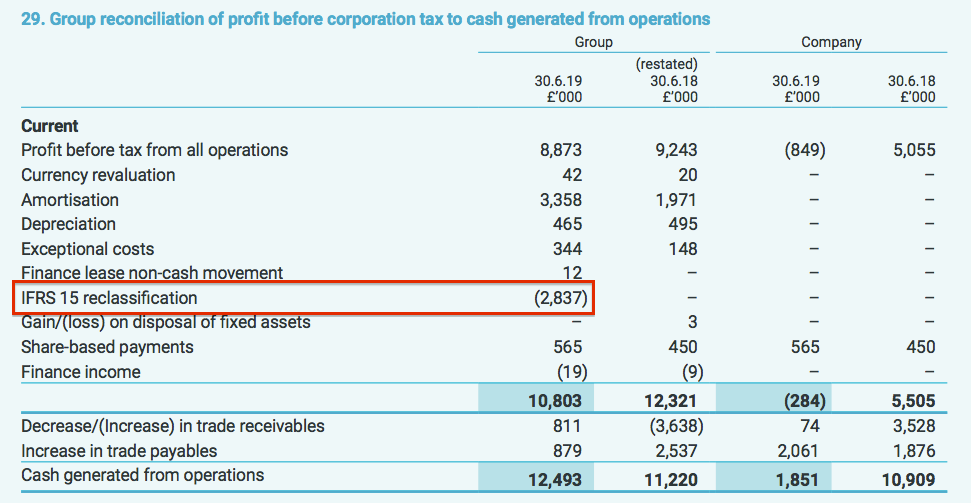 This IFRS 15 reclassification is unusual — a quick check of the annual reports of Sage, Aveva and a few other large software businesses does not reveal anything similar.

IFRS 15 is a new accounting standard that covers revenue recognition from customer contracts.

Dotdigital claims adopting IFRS 15 had a minimal impact on 2019 revenue and profit:

However, the accounting notes do suggest certain future revenue may now be recognised earlier than had been the case before IFRS 15…

…and that certain “immaterial” revenue from the past was recognised earlier than is now the case with IFRS 15:

What Dotdigital has not explained is why retained earnings — representing the group’s accumulated past profits less dividends — have declined by £2 million due to IFRS 15:

This £2 million reduction implies aggregate earnings were ‘overstated’ by £2 million before IFRS 15.

True, £2 million is not a large sum compared to the revised retained-earnings total of £37 million.

However, the adverse adjustment does suggest past revenue and profit were flattered in some way by the previous accounting policy.

The IFRS 15 reclassification is represented within the ‘Other (operating)’ line within SharePad’s cash flow summary:

The reclassification is included within SharePad’s free cash flow calculation — and also explains why the 2019 cash conversion ratio was so modest.

Despite the ‘excess’ development costs, Dotdigital’s cash has piled up nicely: 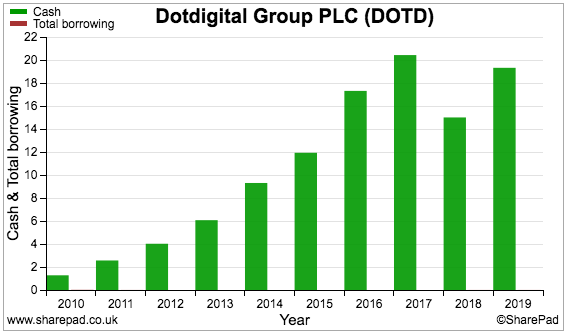 I also like how debt has never featured on the balance sheet.

The lower cash balance for 2018 followed the aforementioned acquisition that broadened the group’s services into text messages, social-media ads and chat systems.

The acquisition cost £10m (red bar below) — a significant sum given reported operating profit was £9m at the time: 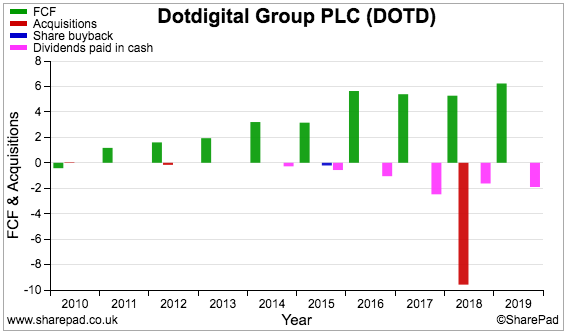 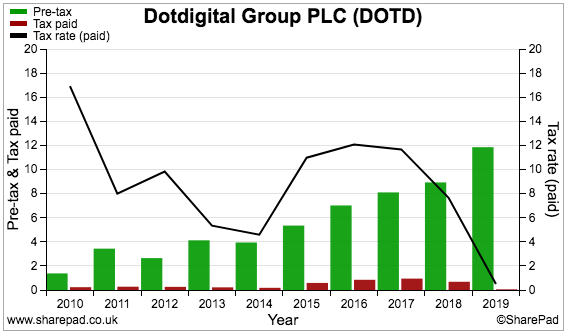 Back to the annual report, and the accounting notes reveal the group is a significant beneficiary of research and development tax credits:

Elsewhere in the annual report, the small-print implies a new accounting standard for leases could have reduced 2019 earnings by £0.5 million, or 6%:

Dotdigital’s board offers some unusual features.

In particular, the chief financial officer has an investing background — and appears not to hold an accounting qualification: 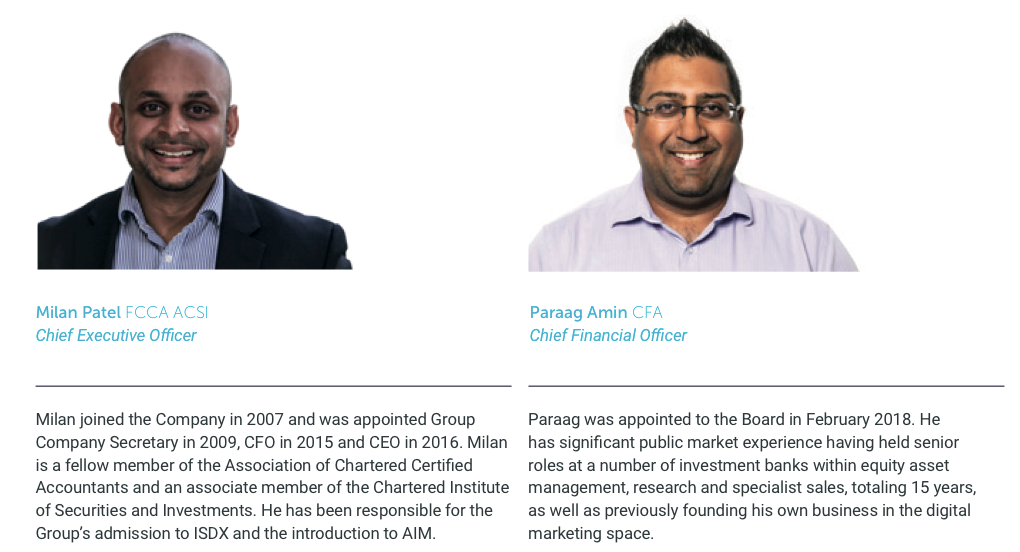 At least the chief executive — who was the previous finance director — is an accountant. I should point out that the chief exec is just 35 years old and has been in charge since 2016.

I would like to think the group’s chairman has every incentive to monitor the executives. He co-founded Dotdigital and retains a 10%/£27 million investment:

The chairman was paid a useful £138,000 for his non-executive duties last year.

Note that Dotdigital’s other co-founder stepped down from his non-exec position during 2018.

I am not sure what to make of three other non-execs departing in quick succession earlier this year — with only one replacement so far recruited:

Revenue is expected to advance at worthwhile double-digit rates during the next few years:

I suspect the varying profit growth forecasts for 2020 are due to differing broker interpretations of exceptional items, the prospect of higher tax and the aforementioned extra lease costs.

Free cash flow is expected to rebound 31% this year to £8.2 million — although that represents only 66% of the £12.3m post-tax profit estimate. The divergence suggests significant development costs will continue to be capitalised.

Full-year figures published during October appeared very positive, with turnover up 15% to £43 million and adjusted operating profit up 10% to £11.8 million.

The dividend was lifted only 5% to 0.67 pence per share as management continues to “evaluate the cash needs required for opportunities in organic growth to increase shareholder value and capital expenditure”.

I doubt shareholders will mind the token payout if the business can reinvest its earnings at rates that sustain that 25% ROE.

“Although relatively early on, Q1 of the 2019/20 financial year has started well with trading in line with expectations. With 89% of our revenues recurring, a high proportion under contract and strong client relationships we continue to have good visibility into our earnings. We are confident in delivering continued organic growth across our core organic growth pillars.”

If that claim is accurate, then no wonder customers have flocked to this business — and helped profit expand at approximately 25% per annum since the firm joined AIM during 2011.

No wonder, too, that the financials look so appealing. Indeed, the high margins and ROE seem indicative of an inherently ‘scalable’ operation — whereby the group’s software can handle additional clients without too much extra cost.

Factor in high levels of recurring revenue, the presence of significant net cash and a chairman with the ‘owner’s eye’, and trailing P/E of 20-plus may well be justified: 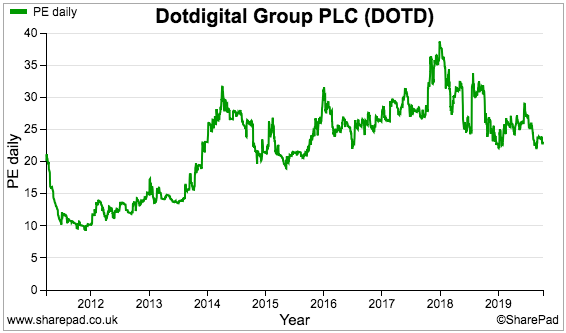 Dotdigital does have drawbacks though.

Capitalised costs arguably flatter earnings, the finance director does not have an accounting background while the IFRS 15 ‘reclassification’ seems odd and requires further study.

In addition, the expansion into text messages, social-media ads and chat systems may not be as lucrative as email.

Finally, Dotdigital’s investor website has the extremely irritating feature of requesting an email address to download any annual report or  presentation: 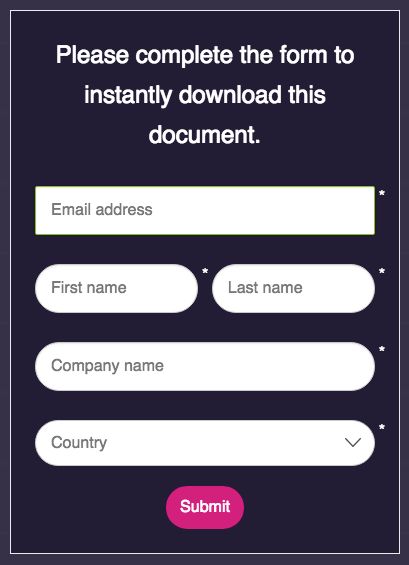 Such ‘forced’ email captures are a terrible way of building an ‘engaged’ mailing list — and what the irritating form says about Dotdigital I will leave up to you.

At least you can enter a fake email address and still retrieve the documents.

Disclosure: Maynard does not own shares in Dotdigital.