Screening For My Next Long-Term Winner: Craneware 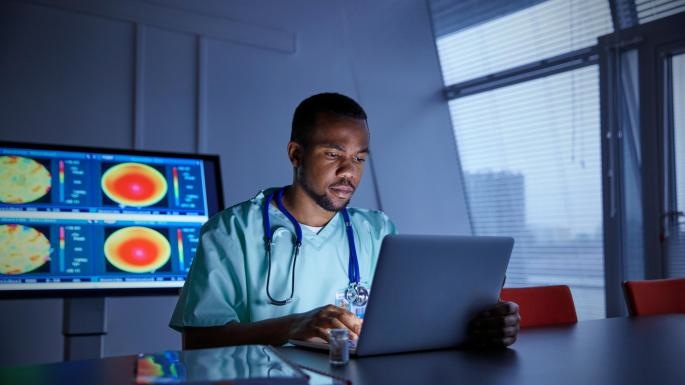 Years ago I read Super Stocks, an investment book that claimed to reveal “powerful new ideas” to uncover “opportunities for spectacular profits”.

I sadly can’t recall identifying any “opportunities for spectacular profits”…

…but the book’s “powerful new ideas” did make some sense — not least the concept of identifying companies that undertook significant research and development (R&D).

The Super Stocks theory was simple: companies that spent lots on R&D stood a better chance of developing great new products than those that didn’t.

Weeding out the tech startups and speculative biotechs

However, using R&D as a screening criteria is not perfect. Drawbacks include:

* Not every company engages in R&D or reports R&D figures, and;
* What counts as R&D can differ from company to company.

Oh, and let’s not forget the obvious downside: the Super Stocks theory could be wrong as hefty R&D can be easily wasted on futile projects.

With all that in mind, I employed SharePad to identify a strong R&D-based business…

…and to weed out the tech startups, speculative biotechs and all the other companies where R&D success was not clear.

The exact SharePad criteria I used were:

3) Dividend growth for a minimum of five consecutive years.

(You can run this screen for yourself by selecting the “Maynard Paton 26/03/19: Craneware” filter within SharePad’s amazing Filter Library. My instructions show you how.)

I selected Craneware because, among those four shares, the company was the largest and offered the longest dividend record.

I was also vaguely aware of the business being renowned for some quality financials. 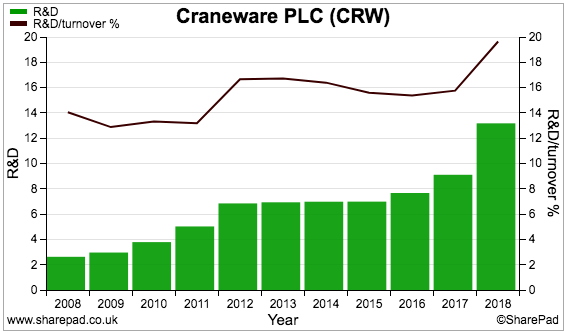 I am encouraged the proportion of sales spent on R&D has increased to almost 20%. The greater spending ought to bode well for further progress.

An operating margin that has averaged approximately 25% suggests a very strong business: 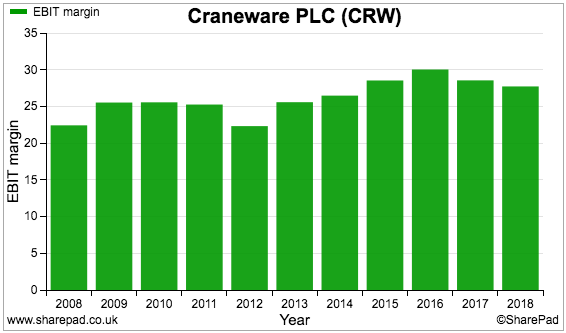 The dividend chart offers further evidence of a reliable performer: 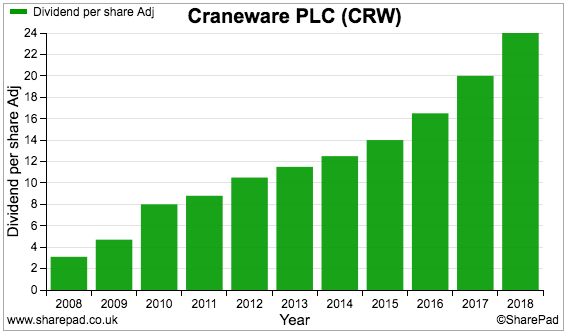 Craneware was established during 1999 when co-founders Keith Neilson and Gordon Craig developed a ‘charge master’ IT system for US hospitals.

The software maintained an extensive list of items that could be charged to patients or their health insurers.

Billable items include just about anything and everything in a hospital — medical procedures, pharmaceuticals, x-rays, blood tests, equipment fees, you name it: 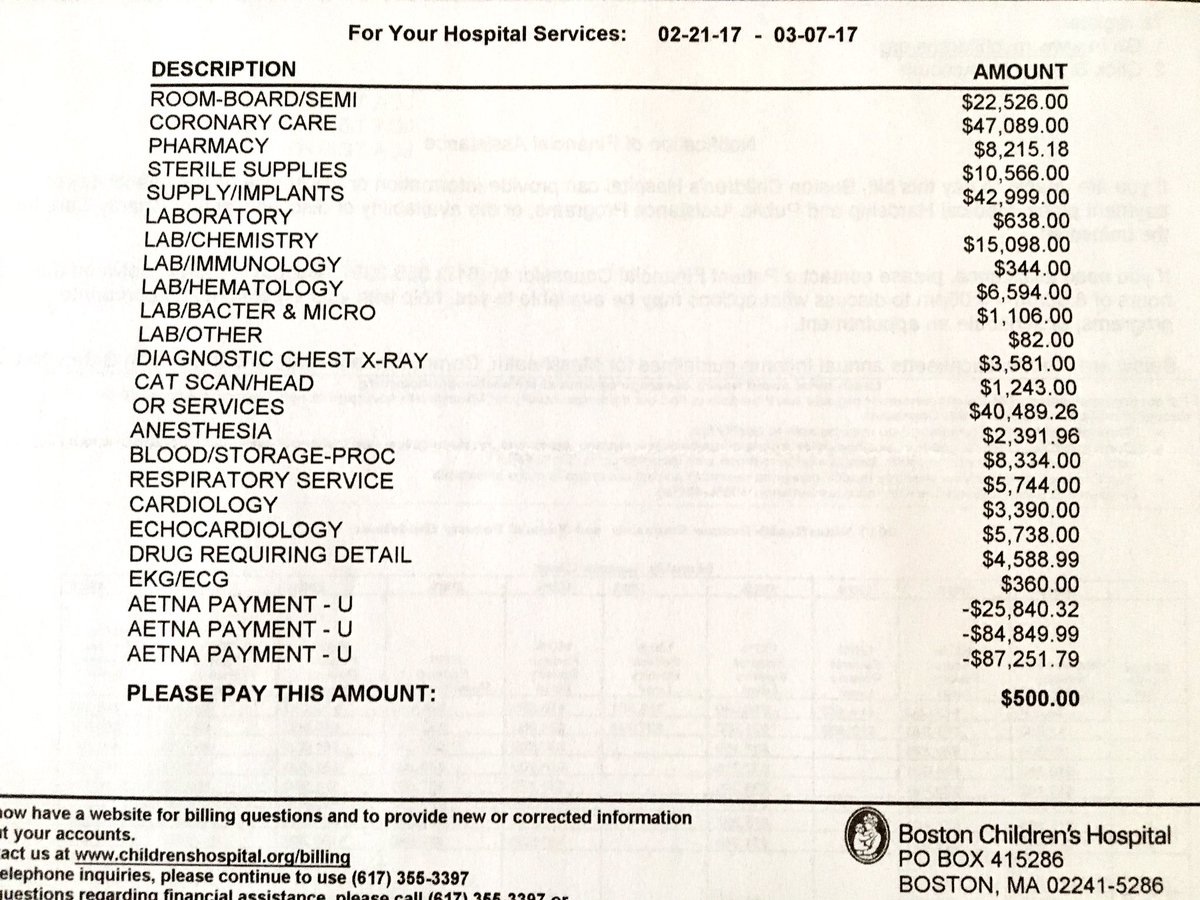 Craneware’s R&D has since funded additional systems that integrate with patient medical records, publish billing and claims reports, manage insurance audits and — perhaps the most challenging of all — attempt to determine the ‘true cost’ of any patient’s hospital stay.

The group’s services have proven to be very popular. Approximately 1,700 US hospitals now use Craneware’s software. 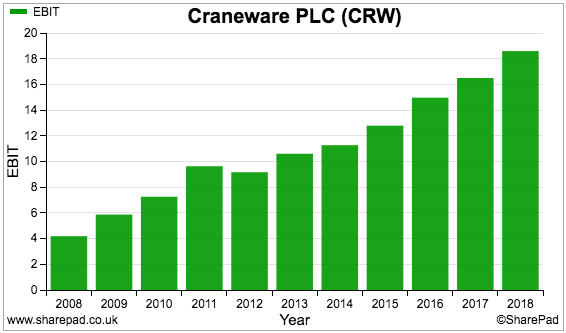 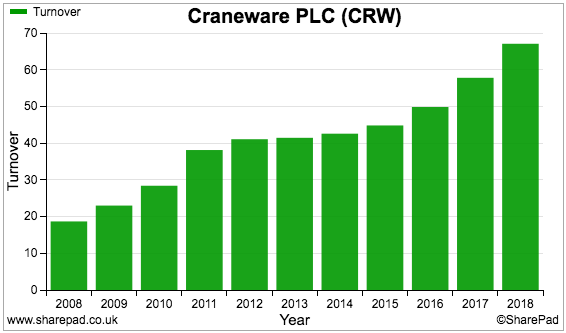 (All figues in $millions)

Craneware’s share price has surged a super 20-fold since the 128p flotation of 2007: 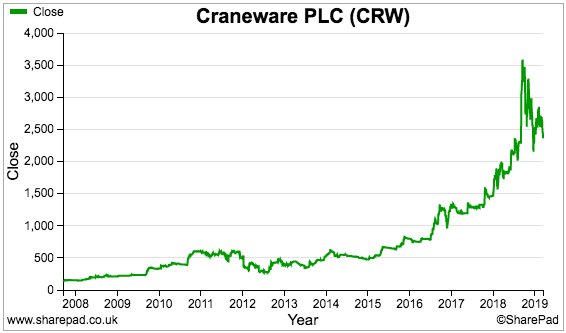 Hmm… definitely a few “opportunities for spectacular profits” there.

Perhaps that Super Stocks book was on to something after all.

A prerequisite for success

The notes within Craneware’s 2018 annual report emphasise the importance of R&D to the business.

More people are employed and more money is spent within the R&D department than any other:

My own charts show the increases to R&D staff and expenditure (the yellow bars) during the last ten years: 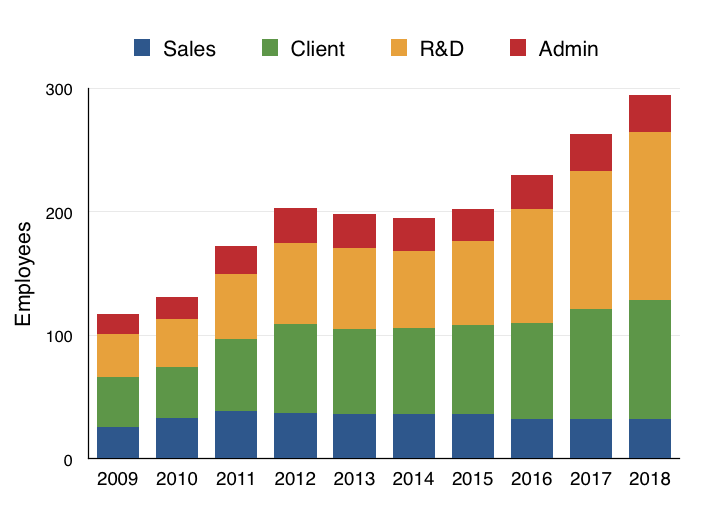 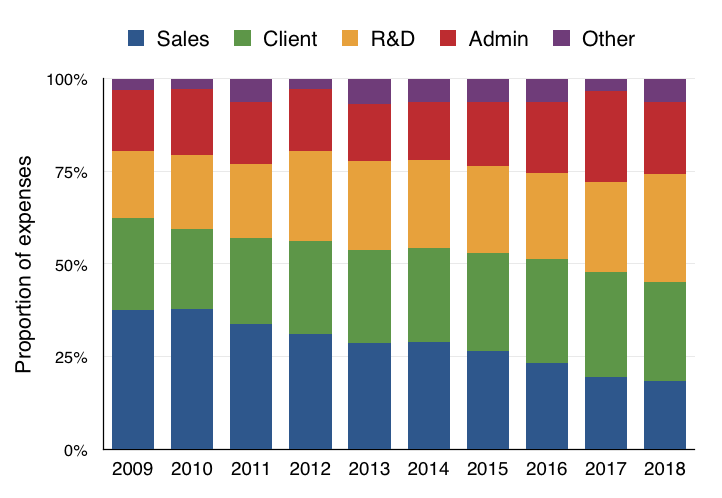 According to the annual report, the directors not surprisingly “regard investment in development activities as a prerequisite for success in the medium and long-term future.”

A $4m difference between profit and cash flow

Now to the R&D accounting.

Similar to Accesso Technology from the other week, Craneware capitalises certain development costs onto its balance sheet rather than charging them immediately against reported earnings.

These capitalised costs are then expensed against earnings during future years through an amortisation charge.

“As specific products are made available to relevant customers, the associated amounts capitalised are charged to the Group’s income statement over their estimated useful economic life.”

(All figures in $thousands)

You can see the amounts capitalised have grown rapidly during the last few years, while the associated amortisation charged against earnings remains somewhat lower.

For some perspective, during 2018 Craneware reported a $19m operating profit — of which $4m was the difference between capitalised development costs and the relevant amortisation.

The annual report reveals the difference may remain significant:

“We expect to see both the levels of development expense and capitalisation continue at the current trends as we progress with building out this solution set.”

Observations from the Summary page 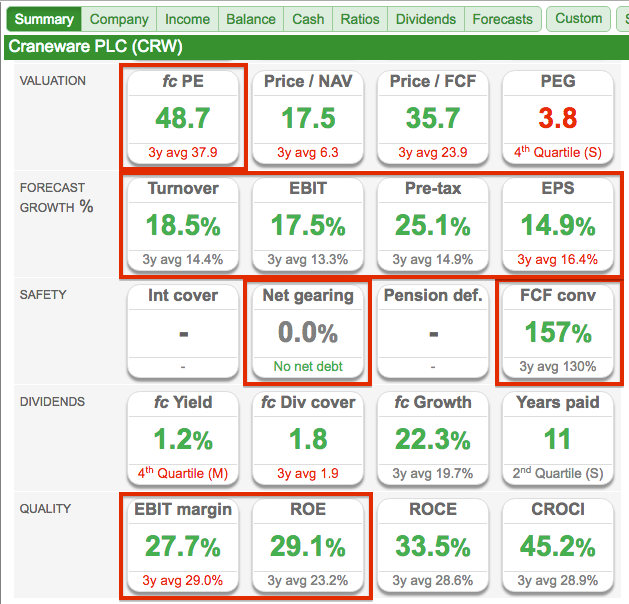 A super collection of green numbers.

* The forecast P/E of 49 (top row) reveals the shares trade at a premium rating.

Not many businesses convert 100% of their reported earnings into free cash flow, let alone 157% as Craneware managed during 2018.

We can see from the above table that operating cash flow is the largest component of free cash flow. 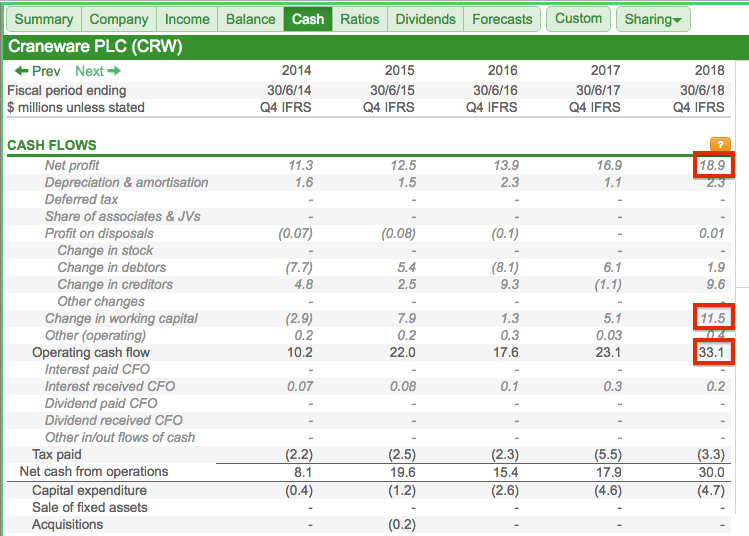 The change in working capital has clearly bolstered Craneware’s operating cash flow and therefore is mostly responsible for that 157% conversion rate.

The relevant accounting note from the 2018 annual report is shown below: 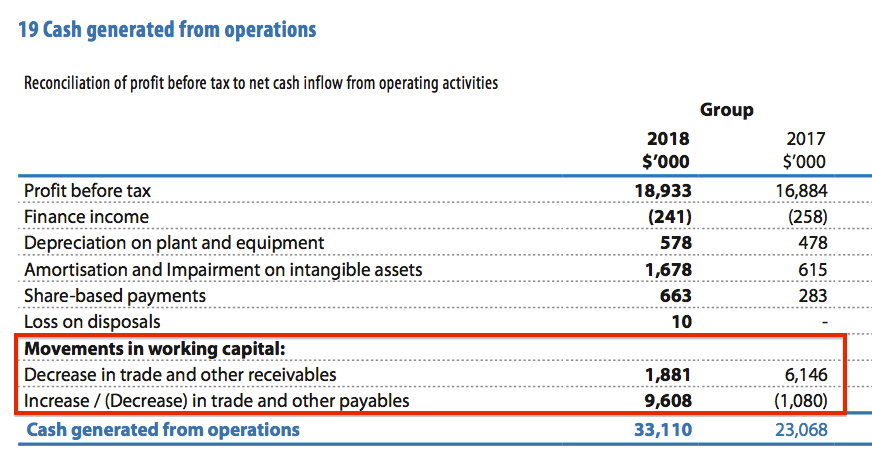 Craneware’s balance sheet reveals why the working-capital movements are so favourable — the substantial presence of deferred income:

“Deferred income levels reflect the amounts of the revenue under contract that we have invoiced and/or been paid for in the year, but have yet to recognise as revenue.” 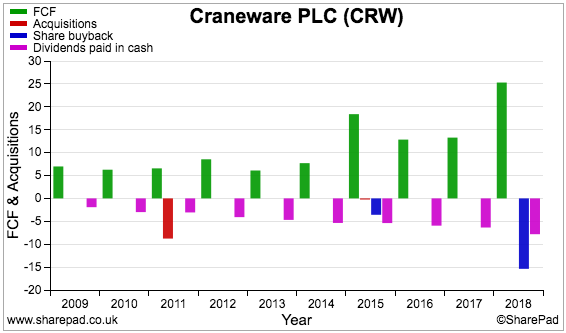 Cash left in the bank has piled up nicely, too: 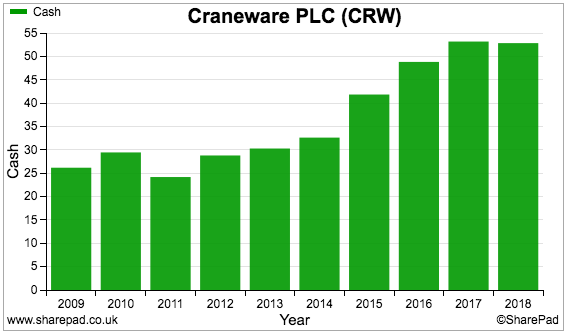 I should add that Craneware has never carried any debt. 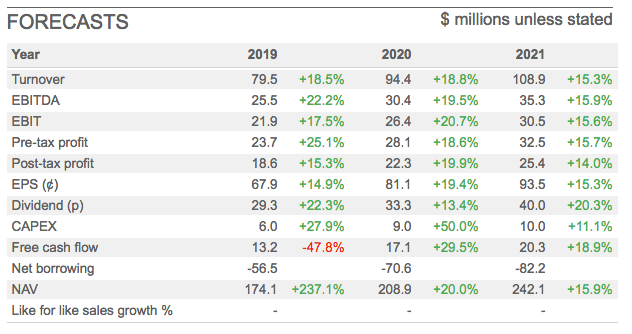 All the R&D expenditure currently translates into some lovely 15%-to-20% growth estimates.

Interim results issued earlier this month showed revenue up 15% to $35.9m and operating profit up 8% to $9.2m.

The current-year forecasts shown on SharePad therefore imply the second half might deliver H2 revenue up 21% and H2 profit up 25%.

The optimistic projections are supported by the predictability of multi-year contracts combined with extremely impressive rates of renewals.

“We measure our renewal rates by dollar value. We do this by measuring the ‘last annual value’ of all customers due to renew in the current year and compare it to actual value these customers renew at (in total), including up-sell and cross-sell. This metric for the current year is at 114%.”

Customers apparently pay 14% more when renewing their contracts because they agree to extra services.

A chart within the annual report emphasises the dependable nature of the business: 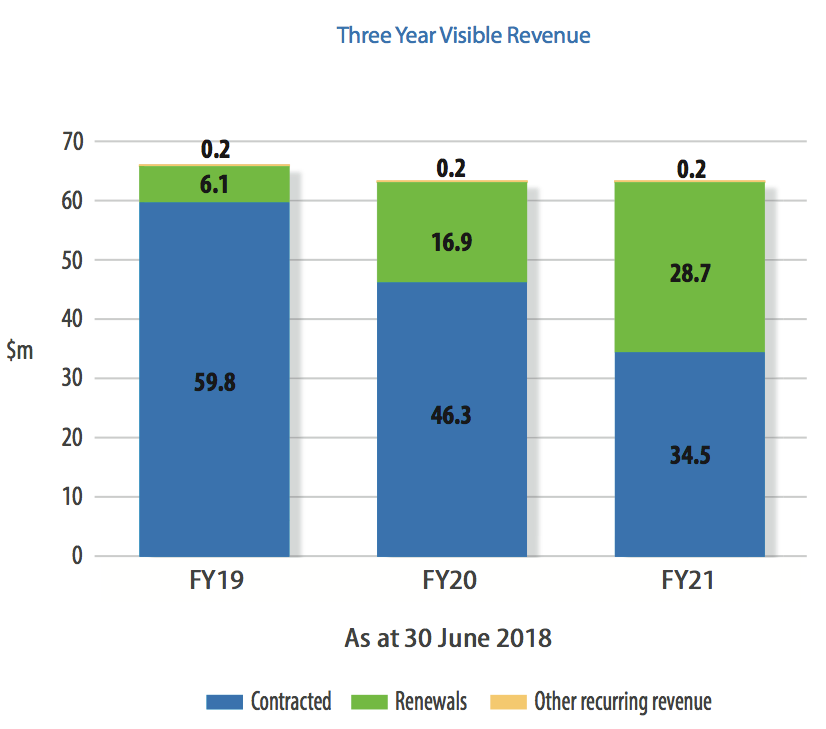 How reliable is Craneware’s revenue ‘visibility’?

Here is the corresponding chart from 2015: 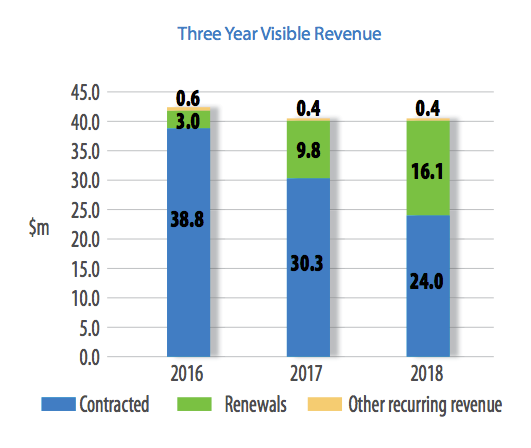 He could be in charge for another decade

All of Craneware’s R&D has been authorised by the aforementioned Keith Neilson — who appears to be the type of owner-orientated leader that often rewards outside investors.

I am impressed Mr Neilson did not sell any shares at the flotation and has since reduced his shareholding by only 13% — most of which occurred way back in 2010.

I dare say Mr Neilson will ensure the dividend continues its upward trajectory given the majority of his income is dependent on the payout.

Mr Neilson is 50 years old and I suppose he could lead Craneware for at least another decade.

SharePad’s Summary page has already shown these shares trade on a P/E of 49. The multiple did reach 60x during October last year: 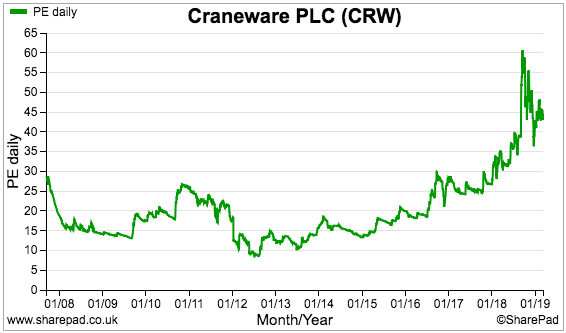 However, the share price has previously traded at modest valuations.

During 2012 for instance, the P/E dropped to just 10 as growth slowed due to US hospitals postponing new contracts to instead concentrate on a Medicare/Medicaid health-records initiative.

Whether US hospitals will once again become distracted by other sector developments is hard to say.

In any event, a 49x rating does not leave much room for error.

I must admit, Craneware’s P/E does remind me of Sage, the accounting software developer.

Sage was a renowned growth stock during the 1990s. Profits continually advanced higher and the accounts — similar to those of Craneware — showcased high profit margins, dependable recurring revenue and attractive cash generation: 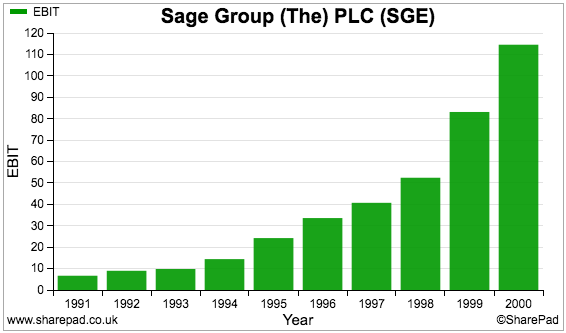 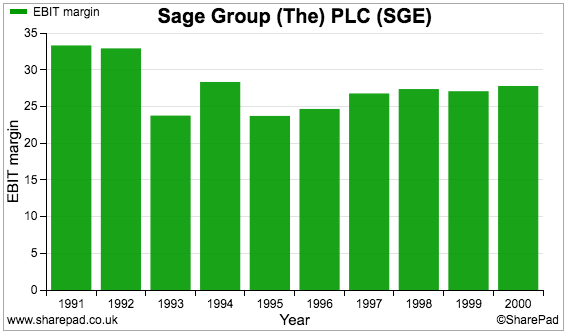 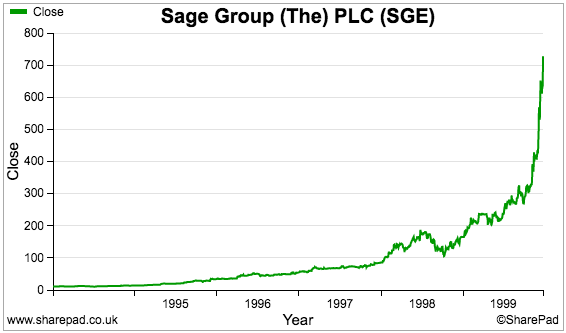 However, the tech bubble then burst and Sage’s P/E rating — having once approached 200 — has for the past 15 years or so bobbed around the 20x mark: 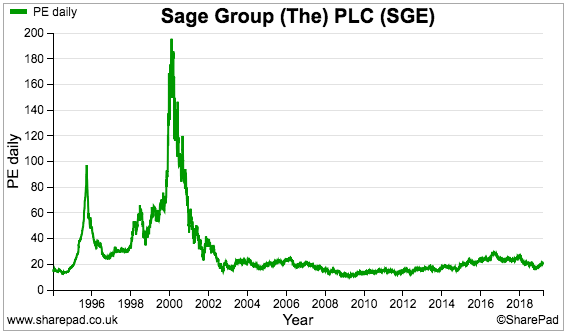 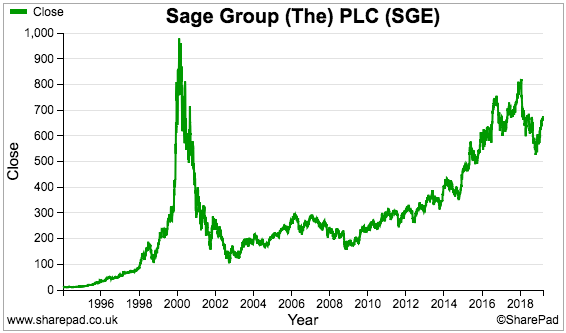 …despite profits quadrupling in the meantime: 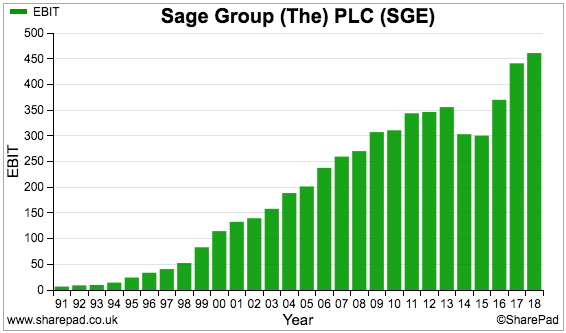 I wonder if Craneware’s shares may face a Sage-like P/E de-rating as the company’s growth rate inevitably slows.

For example, were Craneware to follow Sage and witness its profits quadruple and its P/E drop to 20 during the next 15 years, the share price would trade at approximately £36.

That £36 figure compares with the recent £25 price.

A 44% potential gain over 15 years does not suggest Craneware can provide obvious “opportunities for spectacular profits” from here.

But you never know. Bear in mind Sage spends only 10% of its revenue on R&D versus 19% at Craneware.

I will leave you to decide whether Craneware’s relatively greater R&D efforts can help defer the P/E de-rating that befell Sage.

Disclosure: Maynard does not own shares in Craneware.