Screening For My Next Long-Term Winner: Best of the Best 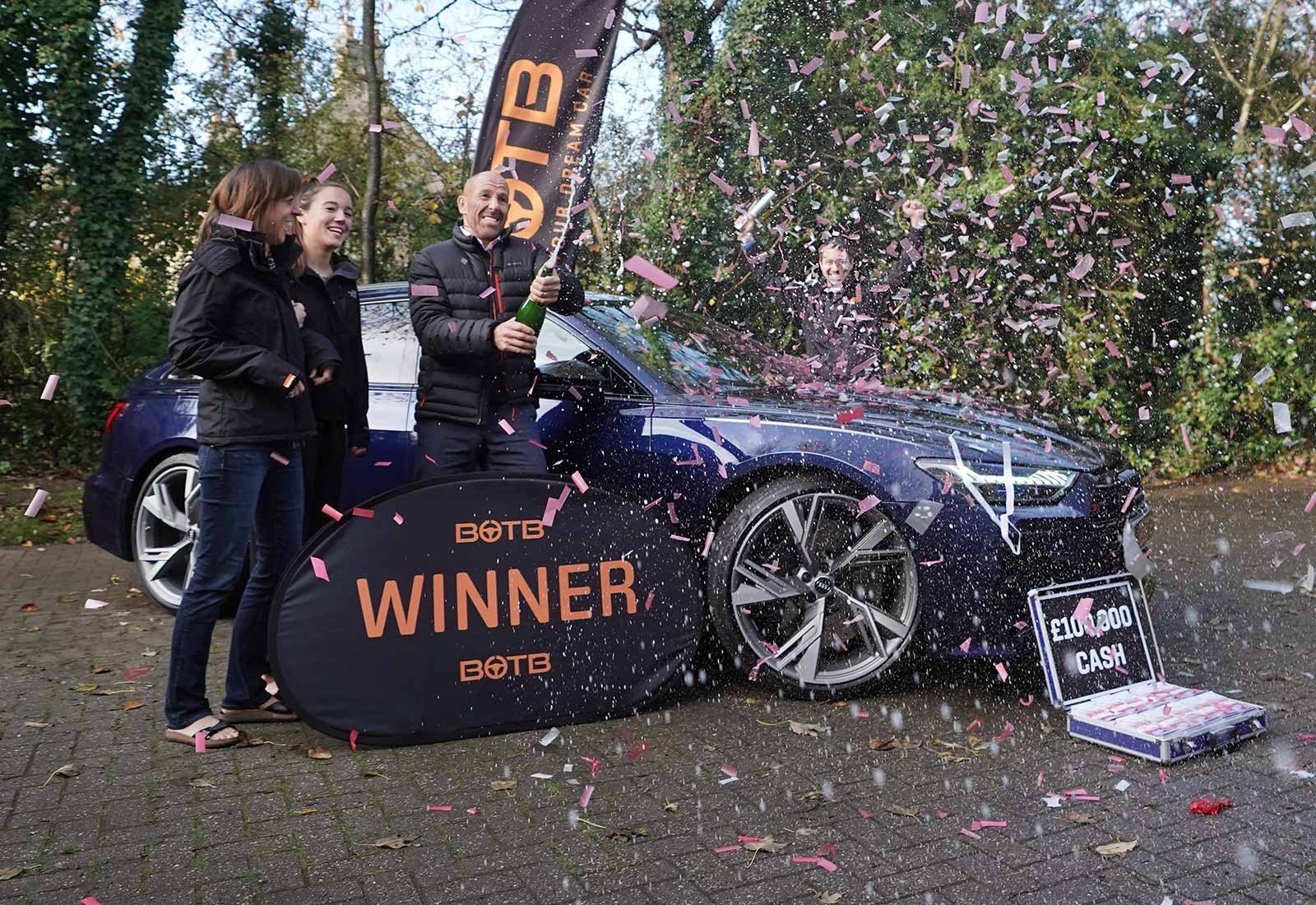 One of my favourite SharePad screens identifies good-quality companies that have grown without acquisition.

I first used the screen to identify Medica by using the following filter criteria:

2) A minimum 15% for both return on equity and operating margin;

3) Net borrowing of no more than zero (i.e. a net cash position), and;

4) A five-year acquisition spend of zero.

I ran the screen the other day and found 28 matches:

(You can run this screen for yourself by selecting the “Maynard Paton 24/09/19: Medica” filter within SharePad’s brilliant Filter Library. My instructions show you how.)

I selected Best of the Best — or BOTB as it now calls itself — because I was already aware of:

History of Best of the Best

BOTB was founded during 1999 by William Hindmarch with a simple idea: “To give people a great chance to win the car of their dreams for a small amount of money”. 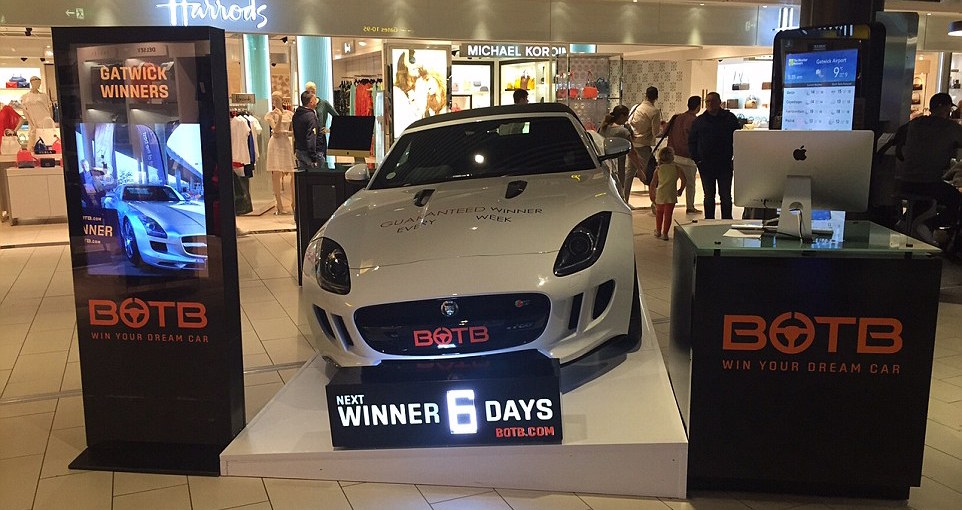 BOTB joined the stock market during 2006 and, for the next few years, the dependence on airport footfall did not produce wonderful updates.

Within six months of the float, sales of competition tickets were hit by “security alerts”:

“Largely as a result of the numerous security alerts across many UK airports the Company experienced particularly challenging trading conditions during the summer months.”

BOTB then lost its concession at Heathrow Terminal 3:

And then BOTB was disrupted by the Icelandic ash cloud:

“Due to the Volcanic eruption in Iceland, all of our airport sites (which are located “airside”) have been closed… [T]his major unforeseen disruption will negatively impact revenues and profits…”

But the real bombshell was dropped during October 2010, when BAA told BOTB its airport concessions would be replaced by “seating [and] signage”:

“Best of the Best today announces that its contracts with BAA Limited have been terminated. The airports company has advised that it will be using the space currently used by Best of the Best to provide more seating, signage and information for passengers.”

Those difficult years prompted greater online sales efforts and, during 2012, BOTB proclaimed social media would “form a key cornerstone of [its] online marketing in the current year”.

At the time online ticket sales represented 34% of total revenue. Today they represent 100% after all the airport and retail sites were closed by 2019.

The transition to go purely online did wonders for revenue and profit: 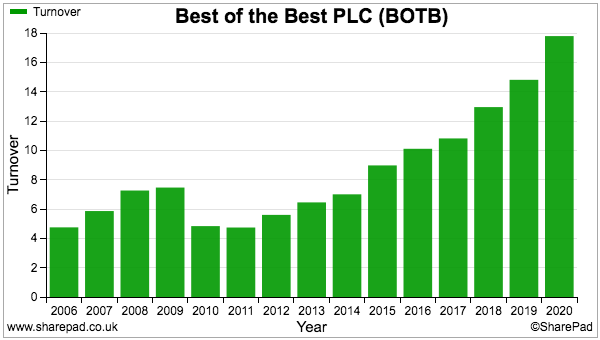 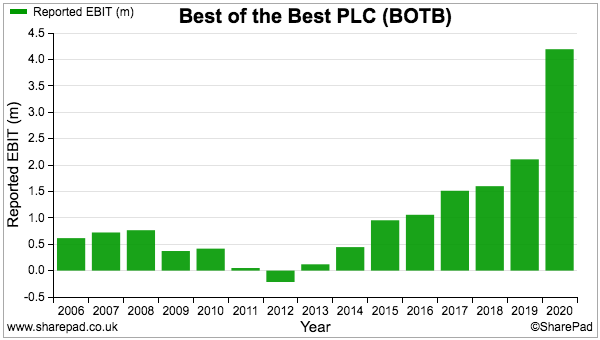 The dividend has picked up, too, although as you will see in a minute, the chart below does not really do justice to BOTB’s payout history: 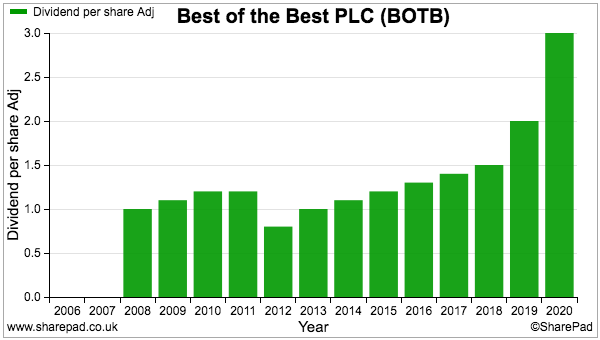 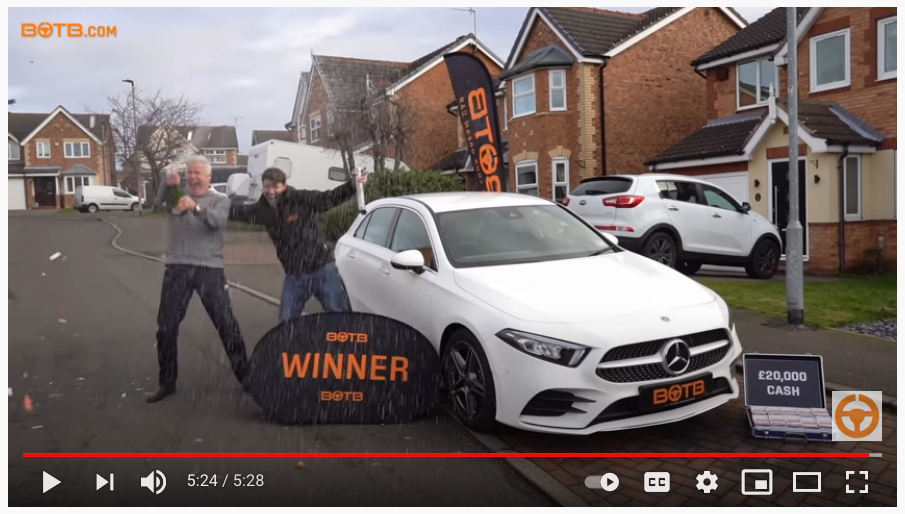 Also helping matters are the videos confirming how each spot-the-ball competition was judged:

Competition tickets were £60 a pop when BOTB floated, but these days you can attempt to bag a Lamborghini, Bentley or Aston Martin for less than a fiver (purchasing ten or more tickets gives a 15% bulk-buy discount):

The share-price performance has been incredible, with recent company progress turbo-charged by heightened ticket-buying during the lockdown (more on that in a minute, too): 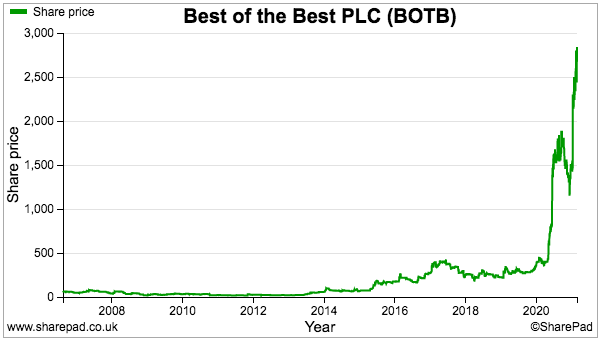 The initial float price was 63p and you could have acquired the shares for 20p following the BAA bombshell. Last week the mid-price was £27 to support a £253 million market cap.

Given how BOTB has expanded online — and the difficulties airports have faced during the pandemic — the BAA bombshell was clearly a blessing in disguise.

Return on equity (ROE) in particular is very striking: 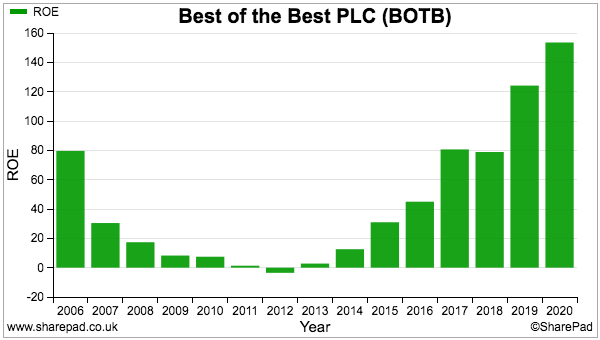 Operating online rather than from airports — and no longer needing to own display-car stock — has clearly enhanced the returns on the profits retained within the business.

Indeed, the 150% ROE for 2020 implies BOTB can grow with hardly any additional capital — the ideal type of business to own.

This next chart provides further perspective on BOTB’s wonderful economics. Between 2013 and 2020, earnings (green bars) improved by almost £3.5 million while net asset value (red bars) advanced by only £0.5 million: 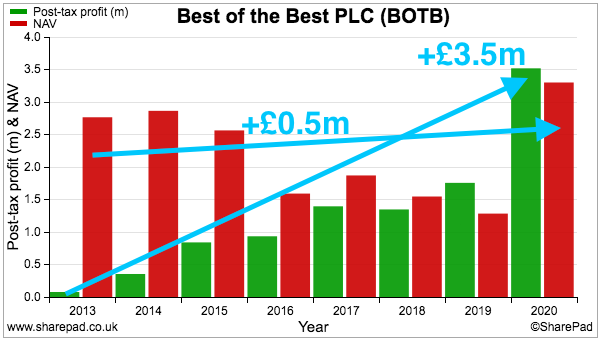 Employing an extra £0.5 million to earning an additional £3.5 million is quite incredible.

SharePad’s Dividend tab confirms BOTB can operate successfully with little capital. No less than nine special payouts (blue bars) have been declared since 2013: 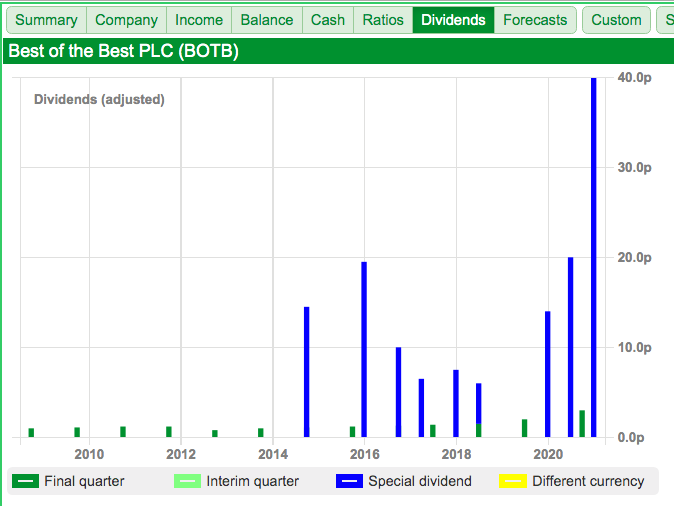 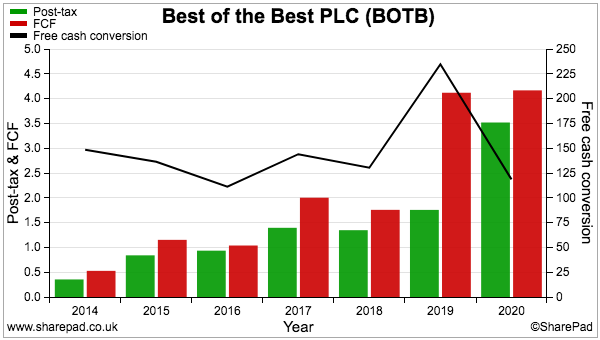 Earnings translate entirely into free cash due to minimal tangible-asset requirements alongside favourable working-capital movements — customers pay immediately for competition tickets while BOTB takes up to twelve months to buy/deliver the prizes!

For some years now cash has been the largest entry on the balance sheet while bank debt has been zero since the flotation: 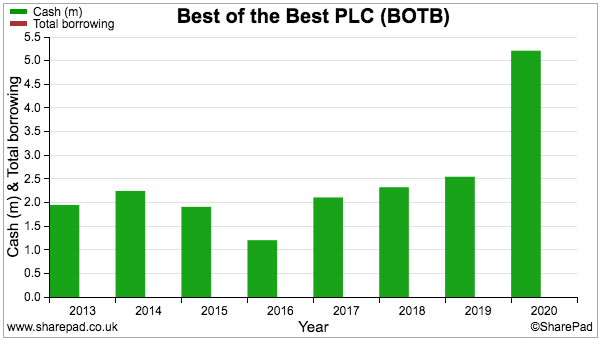 And SharePad confirms nothing has been spent on acquisitions:

The online transition has also created this wonderful SharePad chart: 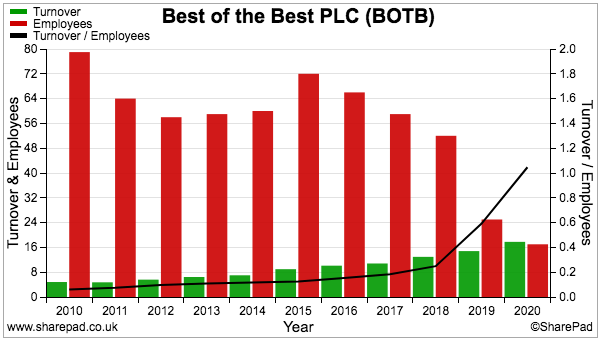 BOTB’s workforce has been cut by two-thirds (red bars, left axis) since 2015… allowing sales per employee to surge to a superb £1 million (black line right axis)!

BOTB rather modestly described the revenue improvement as “encouraging”, and claimed the increase was due to “an enlarged in-house marketing team, deploying constantly updated, dynamic and creative content at a granular level across all channels.”

Of considerable importance to shareholders was the first use of the word “scalable” within a BOTB statement:

“With the transition now complete, the Company is benefitting from a very effective and scalable platform from which it can continue to leverage its brand, supplier relationships and the proprietary systems, software and database it has developed.”

The new terminology suggests BOTB has reached the point where the majority of extra sales will now fall to the bottom line. 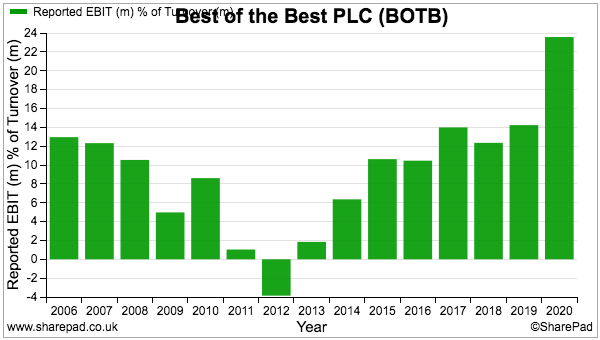 …and January’s interim figures unveiled a further improvement to a terrific 31%.

Those interims covered the lockdown period between May and October 2020, and the bumper performance was presumably triggered by customers having more time and money to play spot-the-ball online.

But the company was trading well prior to the pandemic.

A SharePad news filter search for “ahead of” and “expectations”…

…reveals a series of positive trading updates had started during 2018: 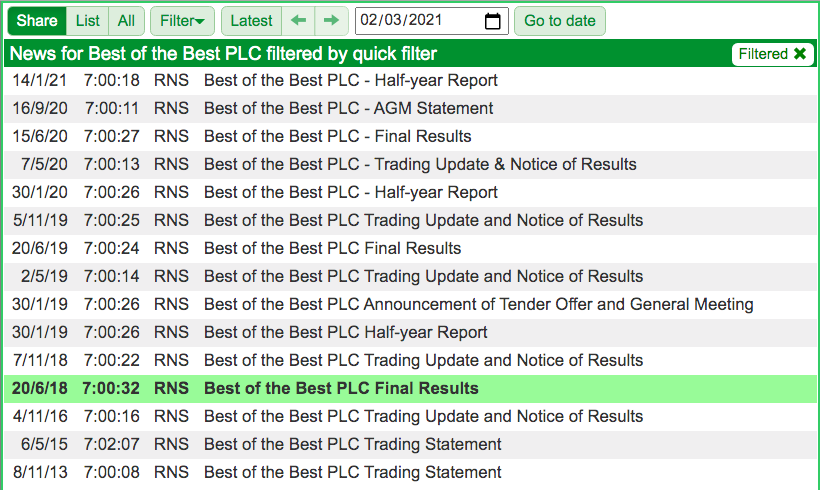 The pandemic therefore looks to have accelerated BOTB’s earlier business momentum, which had already surprised the market.

If the upbeat trading, first-rate financials and special dividends were not enough, last year BOTB found itself circled by potential bidders.

BOTB acknowledged at the time it had received a “heightened level of interest” that included “very preliminary expressions of interest which could potentially lead to an offer or offers being made”.

Following eight months of “extensive talks with a range of parties from a number of sector verticals and private equity”, BOTB concluded the company would be better off staying independent.

Shareholders might normally bristle at such a result. After all, talk of ‘staying independent’ might be a cover for those bidders unearthing something nasty in the data room and quickly walking away.

But I doubt that was the case here. The accounts seem very straightforward and perhaps an adequate offer was simply never received.

Any offer would therefore require Mr Hindmarch’s approval. And bear in mind, too, that Mr Hindmarch is 46 years old — with plenty of time on his side to expand BOTB further.

Shareholders will have to trust Mr Hindmarch has made the right decision, but the omens feel positive.

Those special dividends in particular emphasise Mr Hindmarch’s sensible approach to delivering shareholder returns, as do various share buybacks — the latest occurring during 2019 that repurchased 7% of the company for only 485 pence per share.

We can arrive at our own forecasts, though. For example, doubling up the recent interim performance gives earnings of approximately 120 pence per share and perhaps a multiple of 23.

The company continues to describe social media as a “core marketing and community channel” and has regularly relayed the number of Facebook followers to shareholders.

Between 2016 and 2020, revenue per Facebook follower was remarkably consistent at around the £66 mark (green line, right axis): 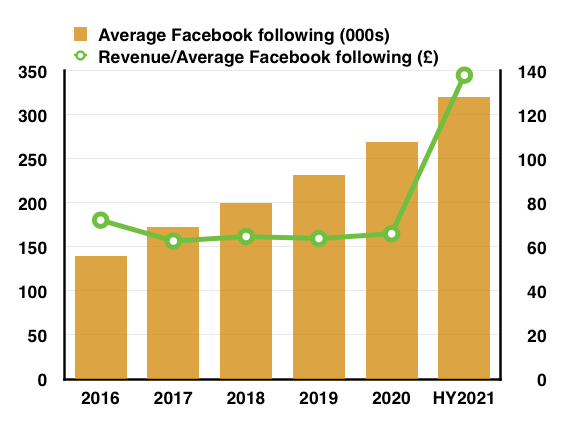 But the latest interims implied revenue per Facebook follower had more than doubled to an annualised £138. 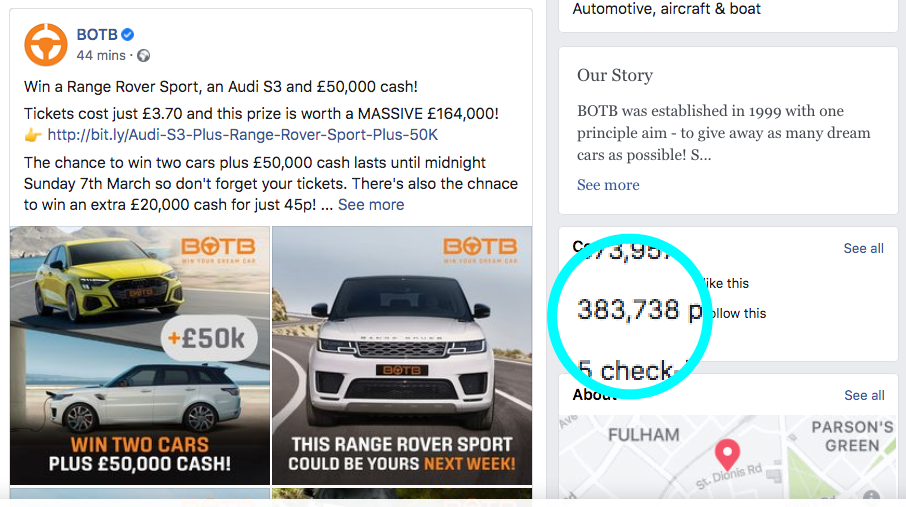 Applying the 31% margin and 17% tax rate recorded in the interims then leads to earnings close to £14 million or 144 pence per share. That projection would put the £27 shares on a multiple of 19.

True, these sums assume BOTB can sustain ticket sales as and when lockdown restrictions are eased… and when customers have less time and money to play spot-the-ball online.

Mind you, a 19x rating does not seem completely outrageous given BOTB’s astonishing first-half performance, the remarkable economics of the business plus the track record of special dividends and savvy buybacks.

The profit estimates and resultant valuation may also explain why Mr Hindmarch was not prepared to let go of BOTB just yet.

Maynard writes about his portfolio at maynardpaton.com and hosts an investment discussion forum at quidisq.com. He does not own shares in Best of the Best.

2 comments on Screening For My Next Long-Term Winner: Best of the Best