Screening For My Next Long-Term Winner: Frontier Developments 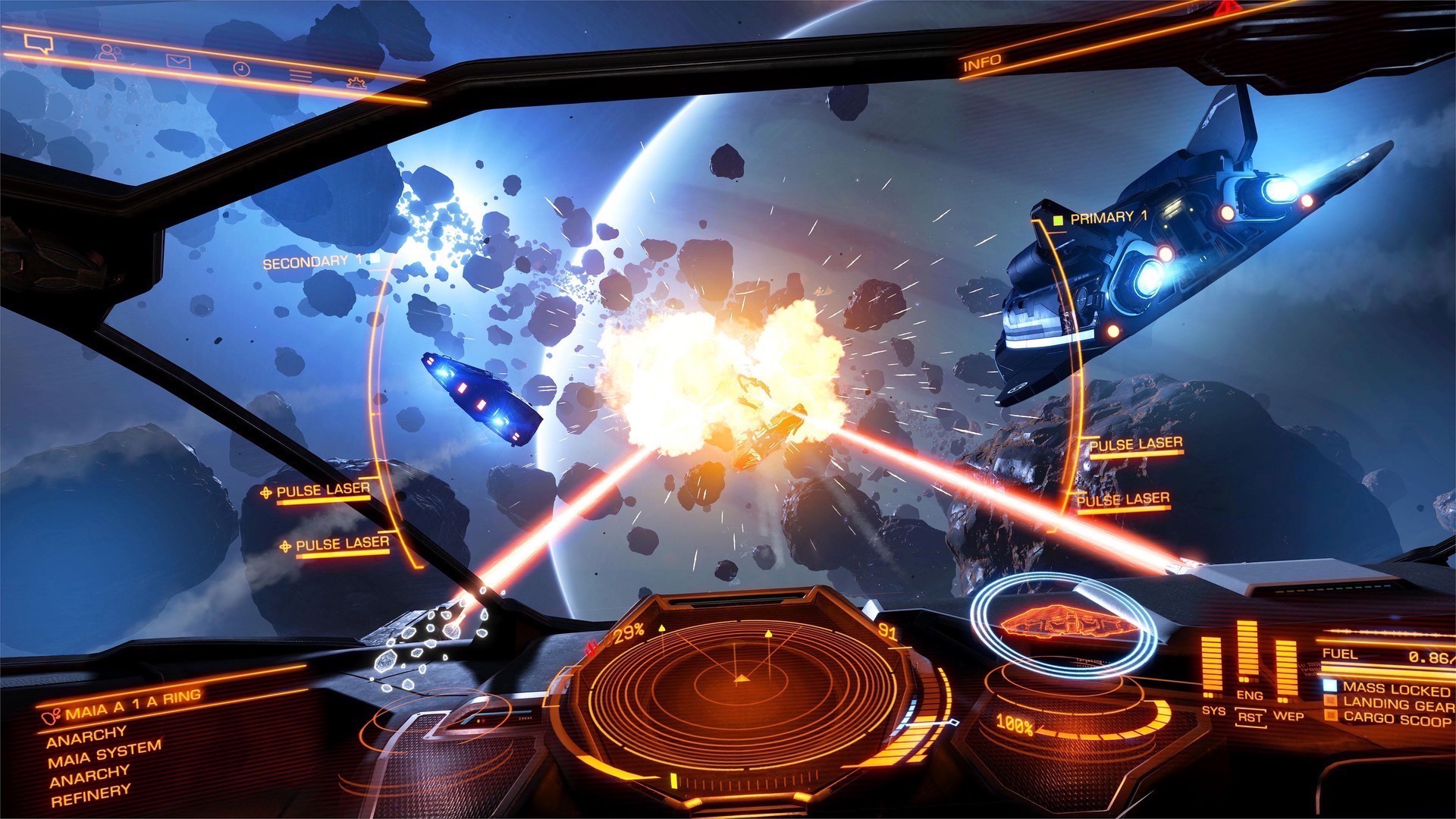 Has the market become too obsessed with ‘pandemic-proof’ shares?

I ask because my SharePad screening has brought Frontier Developments to my attention.

The shares of this computer-game developer have leapt 66% so far this year as industry sales rally during the lockdown.

However, Frontier’s accounting looks rather questionable and the near-£800 million market cap seems completely mad. Yet nobody seems to mind given the company’s apparent resilience to Covid-19.

I identified Frontier by re-deploying the screen I used to pinpoint Hikma Pharmaceuticals the other week.

This screen looks for potential ‘safe havens’ — shares that have climbed higher while the market has dropped. The simple criteria were: 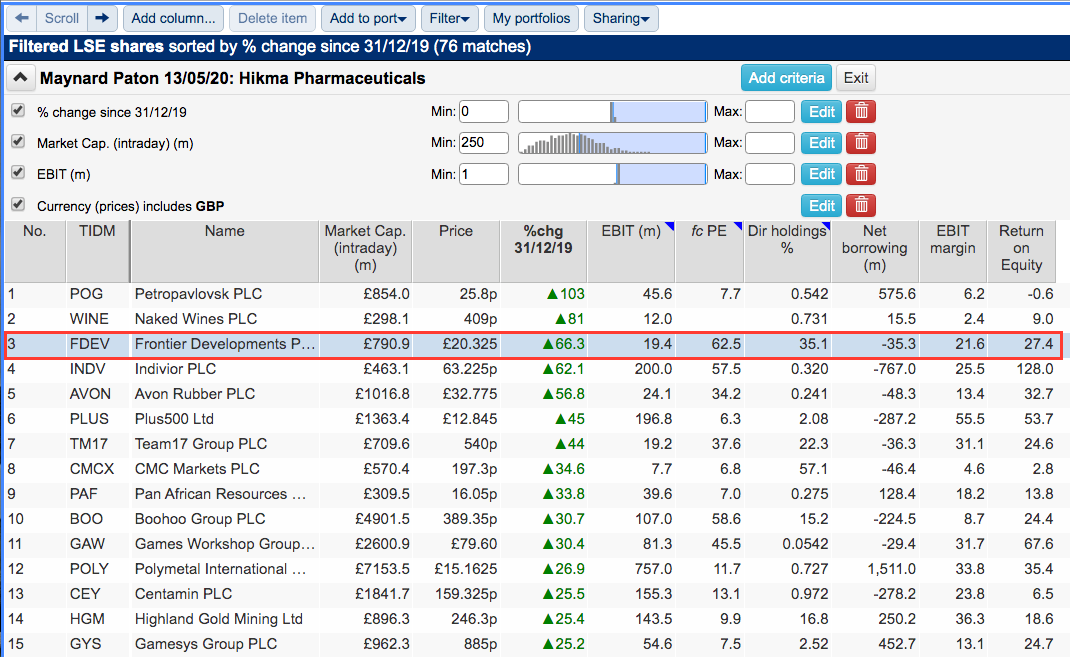 You can run this screen for yourself by selecting the “Maynard Paton 13/05/20: Hikma Pharmaceuticals” filter within SharePad’s helpful Filter Library. My instructions show you how.)

I chose Frontier for further analysis because:

This year’s share surge has extended the wonderful gains enjoyed since the lows of late 2018: 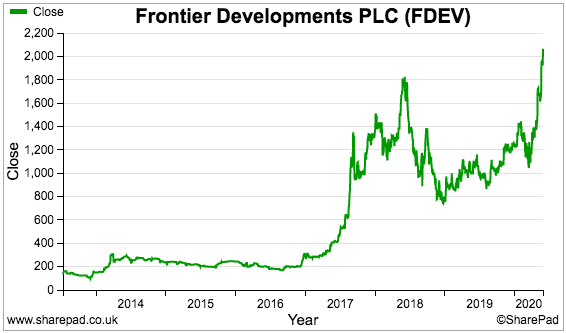 In fact, anyone buying Frontier a few months after the 2013 flotation has now been blessed with a ten-fold return. The £20 share price currently supports a near-£800 million market cap.

Frontier does not have the smoothest of financial histories though. 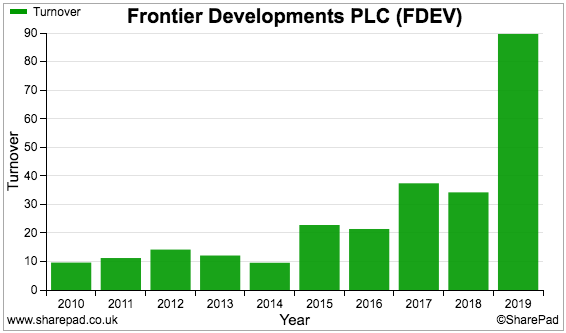 … to deliver a sizeable profit following years of minimal earnings: 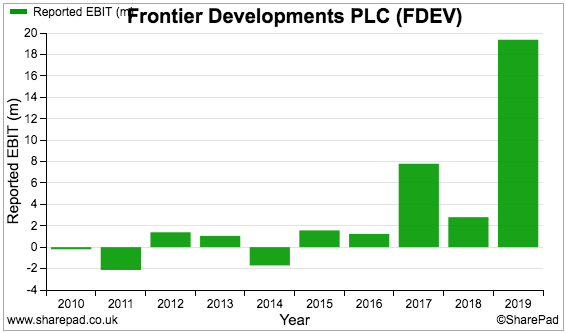 However, no dividends have been paid: Let’s take a closer look at the company before getting on to the accounting issue.

The business of Frontier Developments

Anyone who owned a ZX Spectrum, BBC Micro or Commodore 64 computer back in the 1980s should remember Elite — the spaceship game that boasted ground-breaking 3D graphics and pioneered a way of creating limitless playing possibilities. 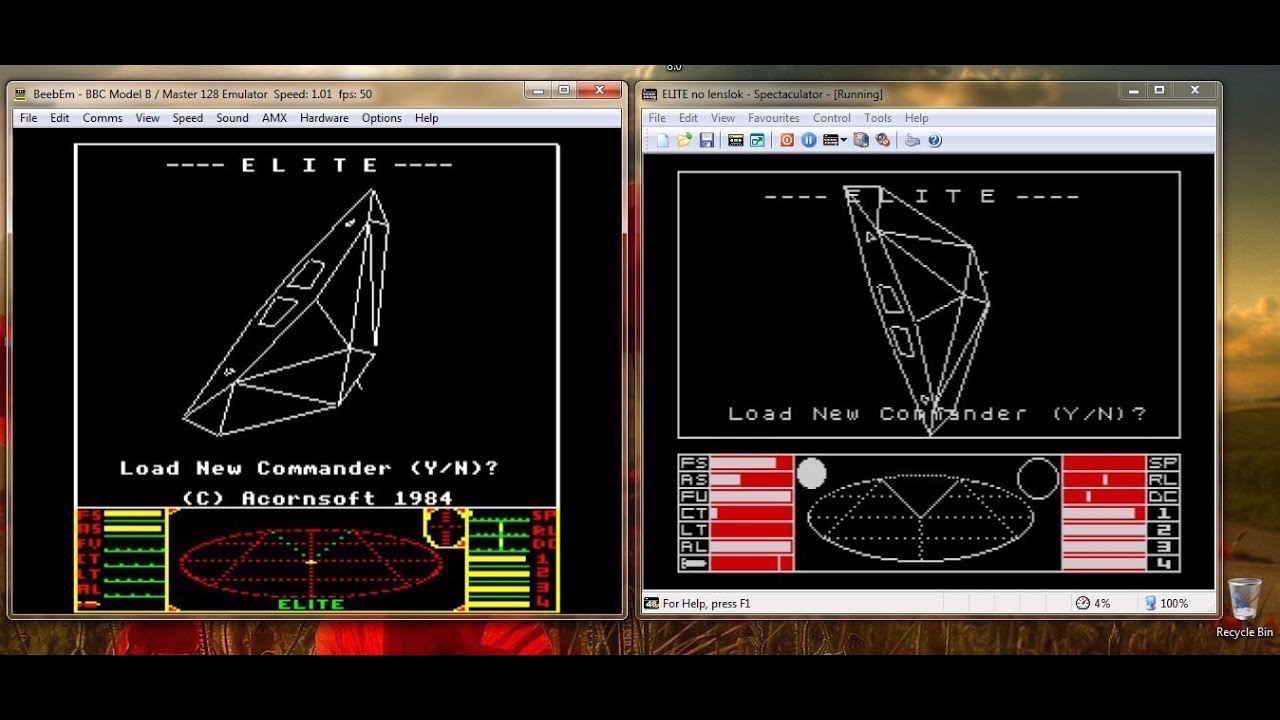 Elite was written by Ian Bell and David Braben, with Mr Braben going on to produce Frontier — the sequel to Elite — during 1993. The following year Mr Braben founded Frontier Developments and during 1995 published a third Elite game called First Encounters.

Games such as Roller Coaster Tycoon for PCs, LostWinds for the Nintendo Wii and Kinectimals for the Microsoft Xbox then followed, but hitting the big time took until 2015 and the popularity of digital downloads. At this juncture Frontier stopped developing titles for other parties and started self-publishing its games online.

Elite Dangerous (the fourth Elite game), Planet Coaster and — in particular — Jurassic Park Evolution then underpinned the sudden revenue and profit surge since 2017. 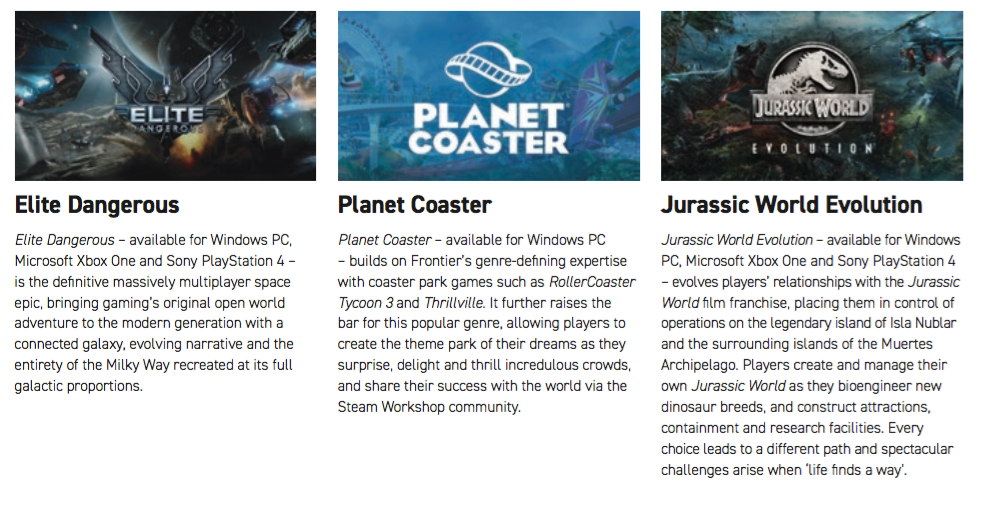 An immediate downside to Frontier’s business is a dependence on just those three ‘franchise’ computer games. The 2019 results warned shareholders that sales may exhibit “stepped behaviour” as new titles were released:

“As we scale the number of franchises over future years, and as the frequency of these releases approaches one per year, this will have a smoothing effect on growth, but in the meantime revenue is sensitive to the specific schedule of such releases and may therefore exhibit ‘stepped’ behaviour across financial years, as those new franchises are released.”

Frontier develops games using its in-house ‘Cobra’ system, which allows faster product testing. The following text was extracted from Frontier’s flotation document, and I will let you decide whether Cobra supports a competitive advantage:

“Cobra facilitates clean, structured code, where the game logic only needs one set of verification at the beta stage of the project – greatly reducing the amount of testing time required for additional platform versions of a game. This allows Frontier to maximise the performance extracted from all supported hardware platforms and has allowed the Group to deliver industry-leading innovations and efficient multi-platform development.

The aforementioned Mr Braben remains in charge as chief executive. His ‘hands-on’ entrepreneurial skills are supported by a significant financial commitment:

Mr Braben did not sell any of his shares at Frontier’s flotation and has since reduced his holding by just 19%. He retains a 33% stake worth approximately £260m. Other directors own shares worth nearly £15m.

The SharePad Summary for Frontier is shown below: 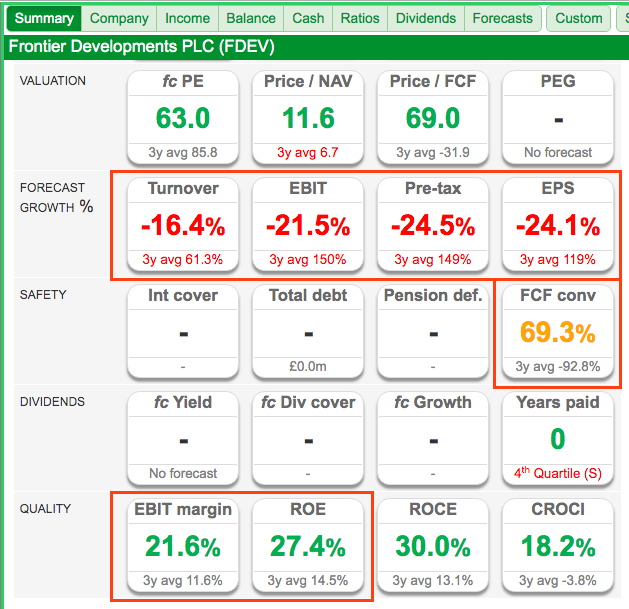 As I will explain in a second, the real problem with Frontier relates to the modest cash conversion highlighted on the third row.

I will then quickly touch upon those negative forecasts for the current year (second row) and the ‘attractive’ margin and ROE (fifth row). 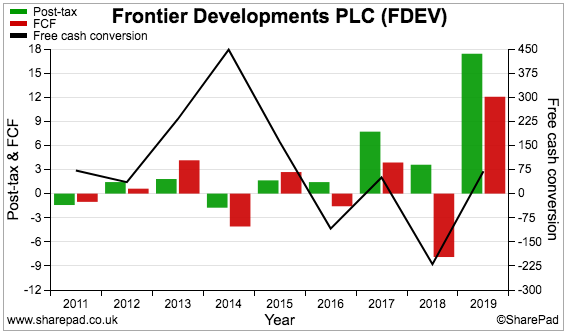 My Renishaw write-up explained how cash conversion is typically held back by: 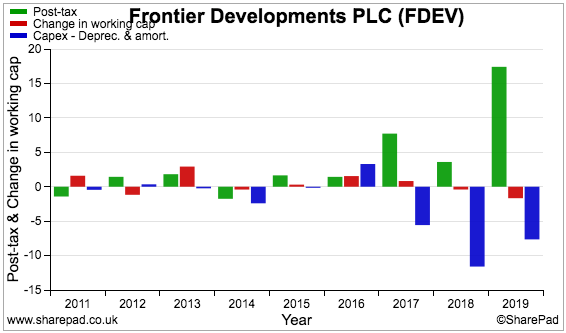 SharePad’s Cash tab shows an aggregate £29 million has been charged against profits as depreciation and amortisation during the last five years: In comparison, capital expenditure has absorbed total cash of £51 million.

The £22 million difference is significant — and somewhat alarming — given the aggregate operating profit during the same five years came to £33 million.

The balance sheet shows rising levels of intangible items, which tells us where the £51 million was mostly spent: 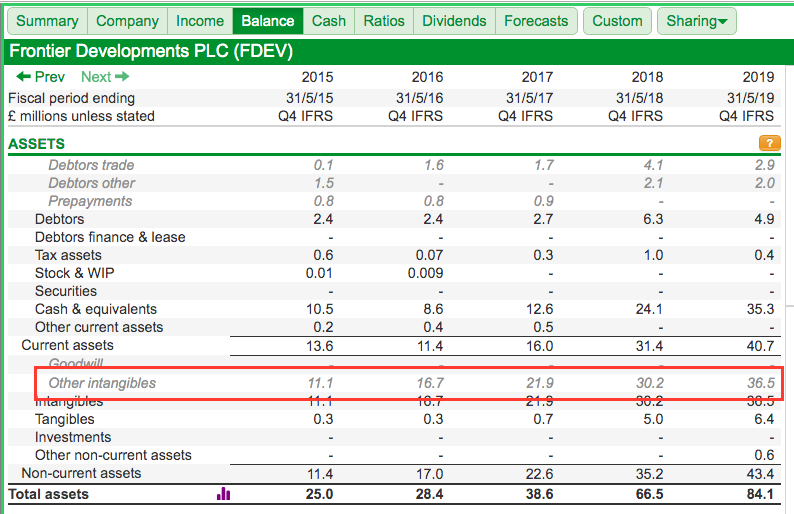 The annual report is needed to discover what exactly is going on.

The relevant note from the 2019 annual report is shown below: 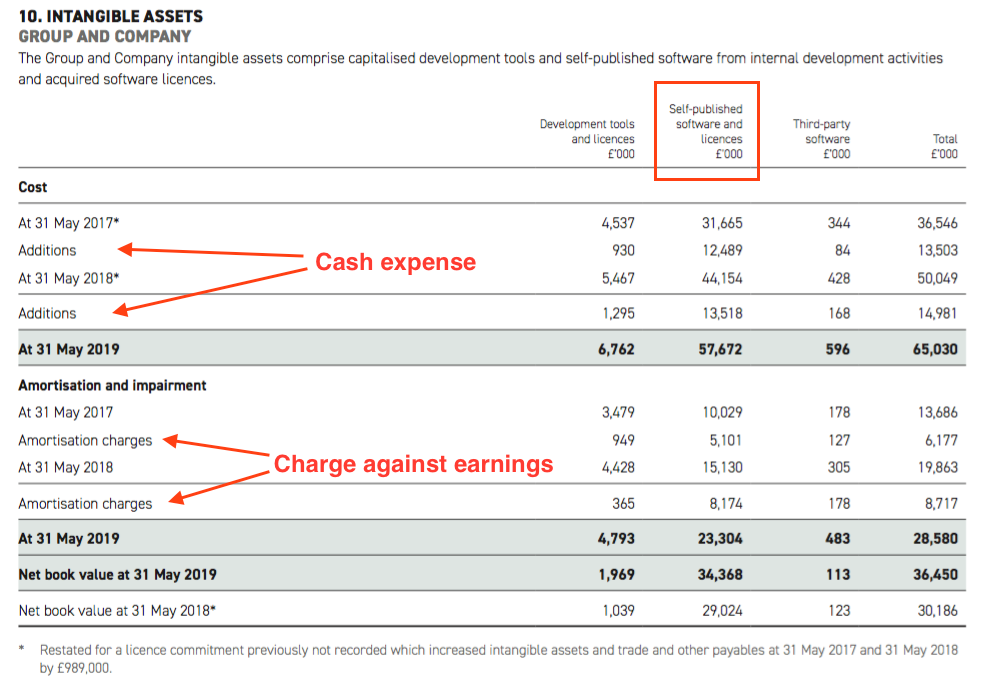 Similar to Craneware, Accesso Technology and other software firms, Frontier capitalises certain development costs onto the balance sheet instead of charging them immediately against reported earnings.

These capitalised costs are subsequently expensed against earnings during future years through an amortisation charge.

Investors must be vigilant with this sort of accounting, because near-term earnings can be exaggerated if the amortisation charge is spread too thinly for too long into the future.

And that appears to be the case at Frontier.

Another extract from the annual report:

According to Frontier, the estimated ‘useful life’ of a development project “upon completion” is generally between three and five years…

…but could be up to six years…

…or in theory even more than ten years.

We can use the accounts to estimate what the useful life of a Frontier game might be: 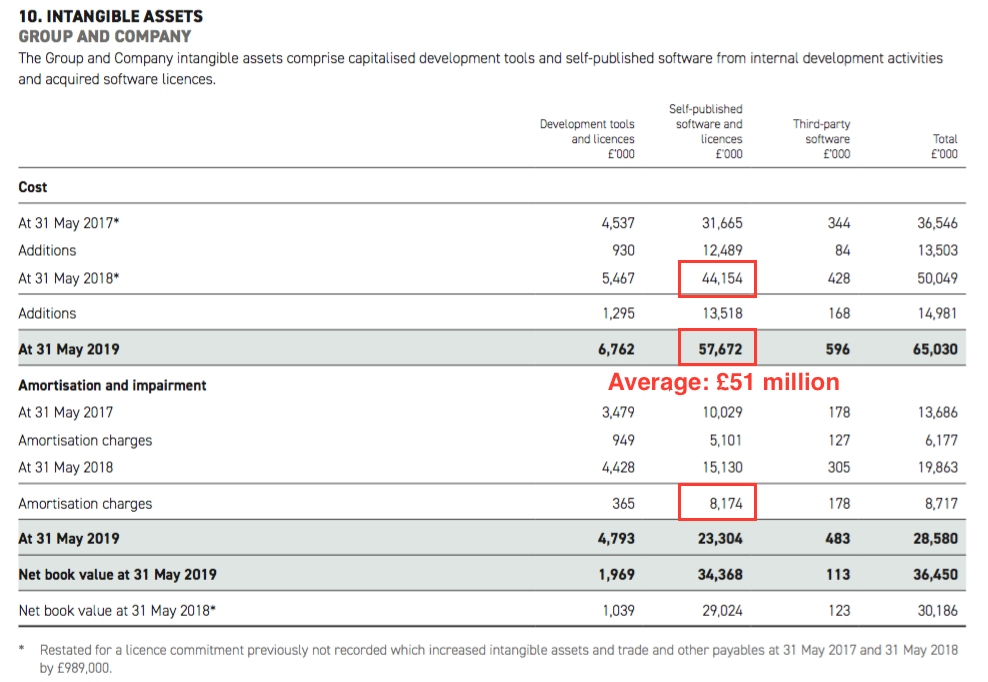 Last year the historical cost of ‘self-published software and licences’ averaged £51 million while the amortisation charge was £8 million. The useful life applied by Frontier could therefore be 6.4 years (£51m/£8m).

Expensing development costs of a computer game over 6.4 years after completion seems very debatable (at least to me).

First half versus second half during 2019

Frontier’s half-year splits support my concerns about the amortisation accounting.

For the first half of 2019, revenue was £65 million and profit was £17 million. The subsequent second-half therefore witnessed revenue of £25 million and a profit of only £2 million: 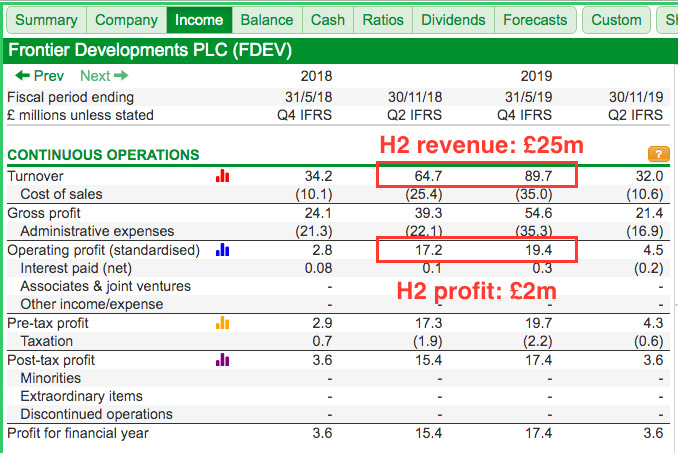 Why was Frontier’s revenue and profit so uneven between the first half and the second half?

The launch of Jurassic World Evolution caused the distortion:

The sudden reduction of revenue and profit for the second half suggests Jurassic World Evolution sold very well during the first few months after launch… only for sales to fizzle out thereafter.

The fundamental ‘accrual’ concept of accounting is to match sales with their associated costs. As such, Frontier really should be amortising the bulk of a game’s development costs within the first few months after launch — because that is when most sales are likely to be earned.

Instead, Frontier amortises a game’s development costs over many years — and on a straight-line basis (i.e. in equal yearly amounts) — which does not reflect a game’s sales profile…

…which means the amortisation is spread too thinly for too long…

…which means reported near-term earnings are likely to be exaggerated. 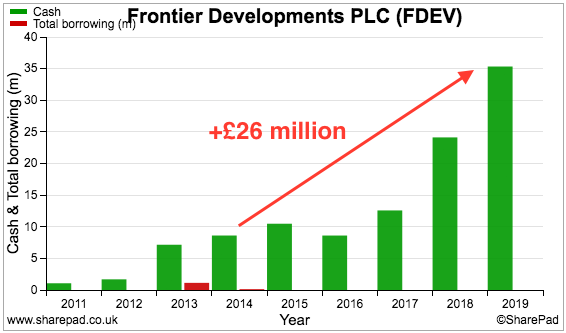 However, SharePad reveals £19 million was raised from the issue of new shares during 2018: 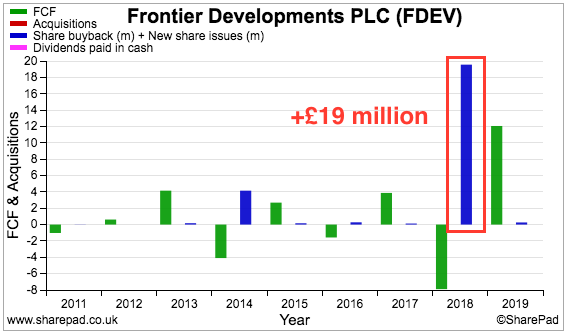 The above chart also shows Frontier has made no acquisitions, and remember no dividends have been paid either.

I have to say, £7 million of free cash generated during a five-year period when reported operating profit totalled £33 million only deepens my concern about Frontier’s bookkeeping.

But here are the relevant charts for anyone interested: 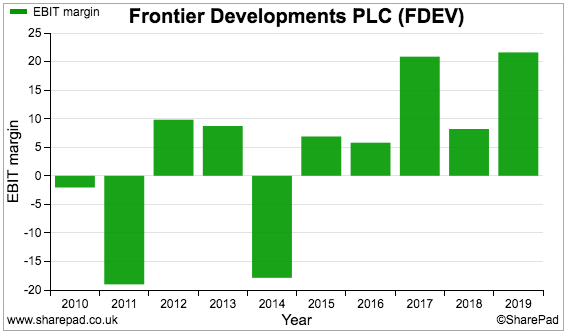 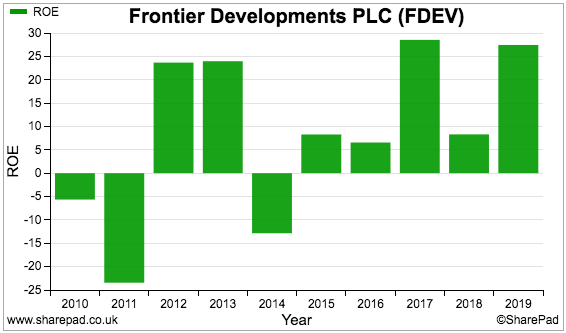 I have seen enough of Frontier’s optimistic accounting to place zero importance on the company’s forecasts and prospects.

But for the record, the negative 2020 projections on SharePad reflect the bumper Jurassic World Evolution sales from 2019 that won’t be repeated:

A trading update this week confirmed revenue for 2020 would in fact be approximately £76 million (down 15%) and operating profit would be at least £16 million (down as much as 18%).

Given the shares trade at 63x forecast 2020 earnings, the market is clearly looking towards the upbeat predictions for 2021, 2022 and beyond.

Those predictions are supported by recent announcements to produce official games for Formula 1 and Games Workshop. Frontier’s plan is to be able to publish two new titles a year from 2022, alongside the usual revamps of its older products.

The cost of developing the new F1 and GW games will of course not trouble Frontier’s earnings until after their launch. The expenditure will then be reflected within the income statement over several years — probably continuing long after the initial sales booms have subsided.

Anyway, nobody apart from me seems too bothered about the cavalier accounting given this year’s share-price surge.

I will simply finish off with a reminder this business sports a near-£800 million cap yet generated free cash of only £7 million between 2015 and 2019. The rather questionable bookkeeping makes the valuation seem completely mad to me.

Disclosure: Maynard does not own shares in Frontier Developments.