Screening For My Next Long-Term Winner: Renishaw 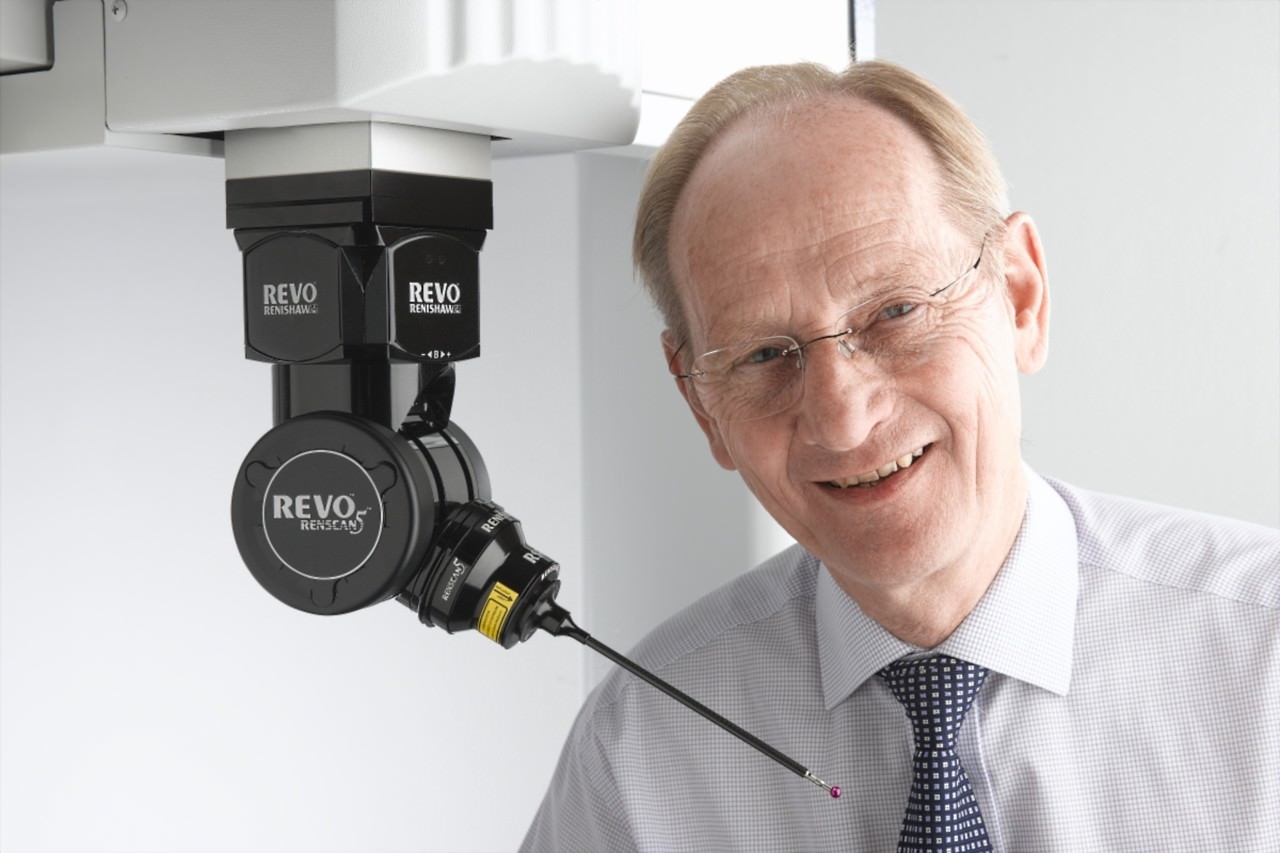 I am convinced the very best shares to own are often led by executives who truly act in the interests of ordinary shareholders.

In particular, bosses who:

* do not dilute investors by issuing shares willy-nilly;
* create dependable returns through a rising dividend, and;
* own a lot of shares themselves…

…should deliver better profits than ‘salarymen’ directors who care more about their wages, options and bonuses.

Let’s employ SharePad to identify a suitable company and leader.

Greater quality than my own investments

For this search I used SharePad to shortlist companies that offered:

3) A minimum director shareholding of 5%. 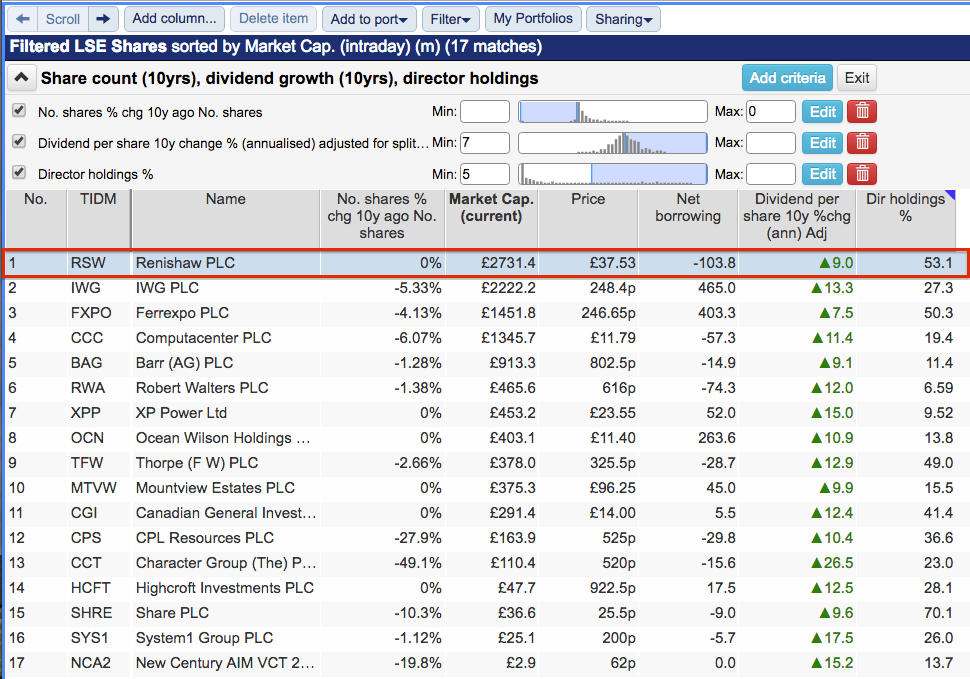 (You can run this screen for yourself by selecting the “Maynard Paton 08/04/19: Renishaw” filter within SharePad’s super Filter Library. My instructions show you how.)

SharePad returned 17 companies — three of which featured in my own portfolio.

However, I overlooked my shares to instead select Renishaw.

I already knew Renishaw was respected by many private investors — and that the business was likely to exhibit greater quality than my own investments!

I had also seen Renishaw’s share price drop after the company recently admitted current-year revenue and profit would be less than expected: 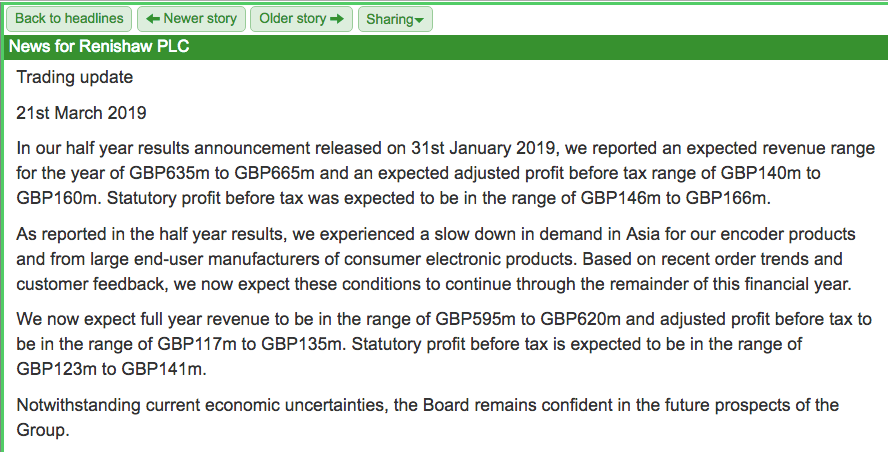 Renishaw had been predicting 2019 revenue and pre-tax profit of £650m and £150m respectively.

The projections have now been reduced to approximately £607m and £126m — both of which are lower than the levels achieved during 2018. 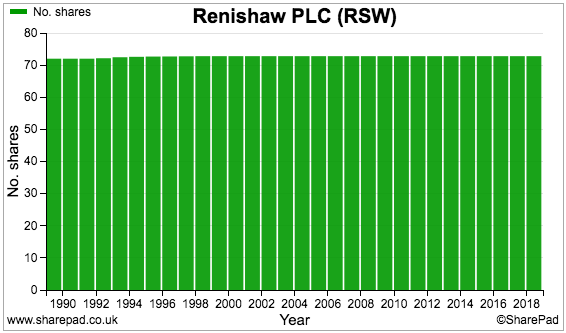 The number of shares has barely moved in 30 years.

The absence of an option scheme helps explain the standstill share count.

In fact, Renishaw’s archives reveal the company’s last share options were granted during 1989 and exercised during 1999.

The dividend has advanced over time — barring the payout’s collapse during the banking crash: 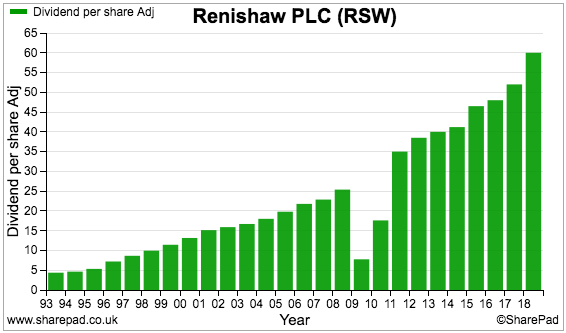 SharePad also reveals one director owns 36% and another owns 17% of the business:

The combined 53% shareholding probably explains why the directors have not diluted the share count while raising the dividend so many times.

I should add the combined shareholding of the two directors boasts a value in excess of £1.4 billion.

The history of Renishaw

The two directors who own 53% of Renishaw — Sir David McMurtry and John Deer — co-founded the business during 1973.

Sir David designed and built the very first touch-trigger probe during a weekend in his workshop while employed at Rolls-Royce: 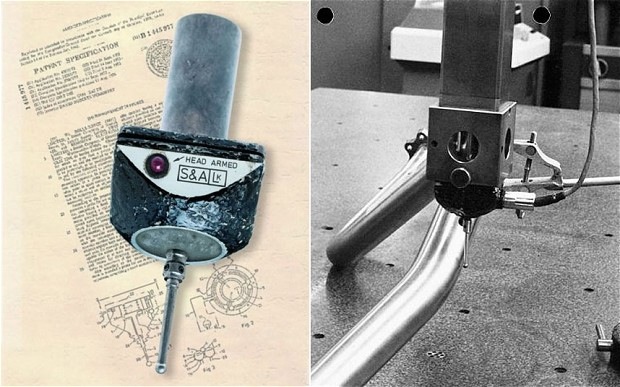 The weekend project was prompted by Sir David being unable to accurately measure a flimsy instrumentation pipe for a jet engine.

The clumsy measuring machine used by Rolls-Royce at the time kept knocking the pipe. In contrast, Sir David’s lightweight probe could easily take the necessary x,y and z co-ordinates at the point of contact.

These days Renishaw designs and manufactures a vast range of precision-measuring machines and systems for manufacturers within the aerospace, motor, electronics and energy industries:

Only 5% of sales are produced within the UK and Ireland, with many customers located in China, the United States, Germany and Japan. 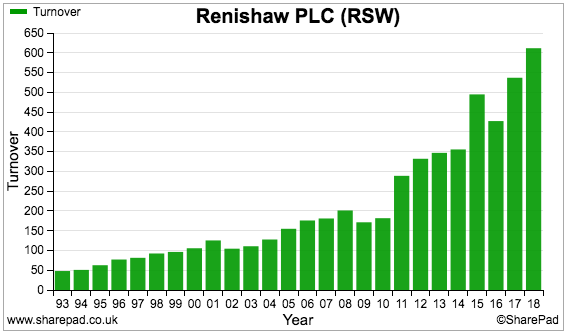 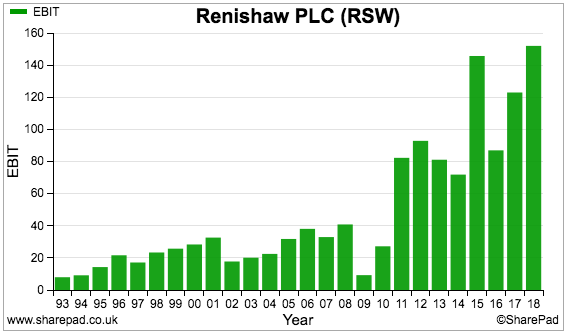 Renishaw floated during 1983, when sales were £6.4m and operating profit was £1.8m. Amazingly enough, Companies House stores the firm’s annual accounts all the way back to 1975 — when trading profit was just £10k: 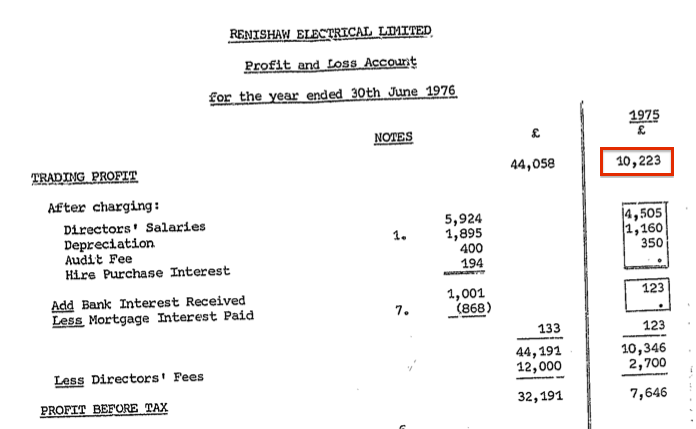 The shares have been a super performer for longer-term investors: 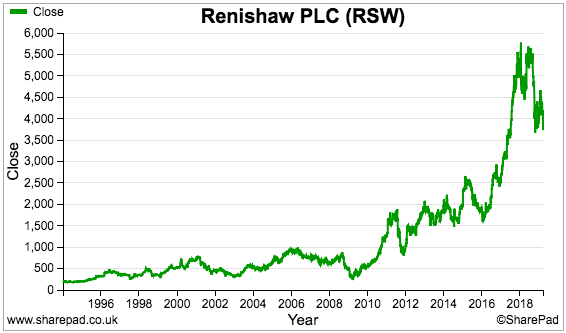 However, the recent price is approximately a third off the £57 high reached early last year.

Renishaw’s SharePad Summary is shown below: 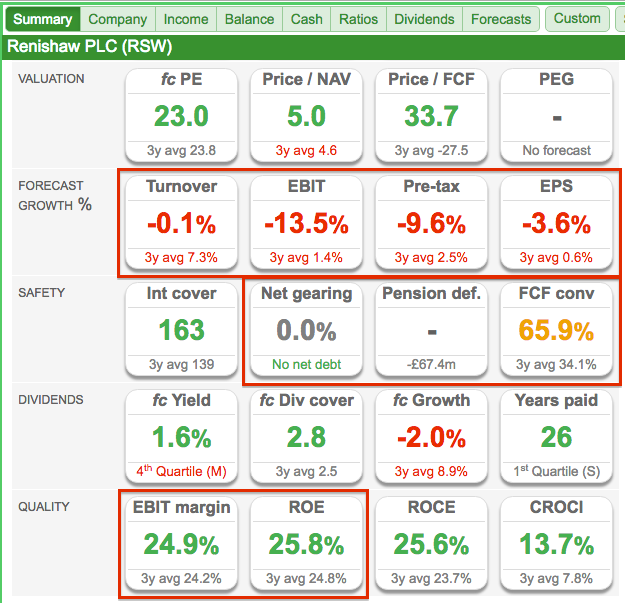 * Revenue and profit are expected to decline during 2019 (second row);
* The balance sheet carries net cash and a pension deficit (third row);
* Earnings are not entirely converted into free cash (third row), and;
* The operating margin and return on equity (ROE) look attractive (fifth row).

Let’s take a closer look at all of those items, starting with the operating margin and ROE.

True, Renishaw’s operating margin and ROE have been up and down: 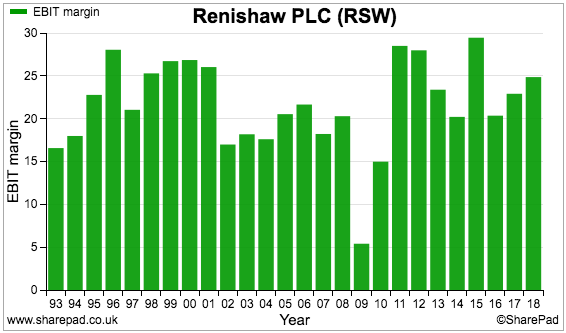 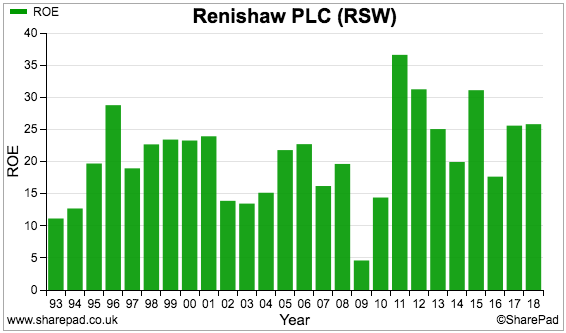 However, the figures have generally come in above 15%, which suggests the group has created a lucrative position within its engineering speciality.

The appealing ratios are derived partly from creating 1,800-plus patents. As the 2018 annual report explains:

“Our strategy is fundamentally based on long-term investments in patented and innovative products and processes, high-quality manufacturing, and the provision of excellent local support to our customers in all our markets around the globe.”

Such is the international prominence of the group’s equipment, Sir David McMurtry has even claimed:

“We are confident that there are not many modern-day planes, trains or automobiles in the world that have not been touched in some way by Renishaw products.”

This next chart outlines Renishaw’s record of converting reported earnings into free cash: 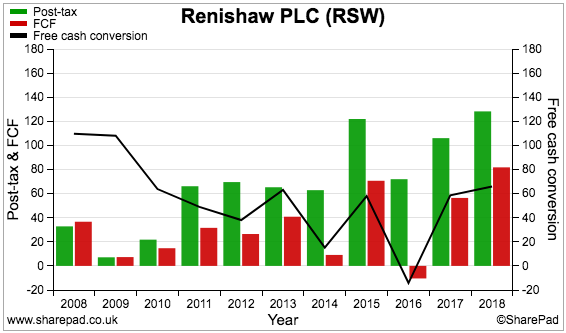 Unlike Craneware from the other week — where cash conversion topped 100% — Renishaw has recently managed to convert only 65% of earnings into free cash.

Earnings often convert into low levels of cash flow due to:

The chart below compares Renishaw’s earnings to the additional working-capital cash and the ‘excess’ capital expenditure: 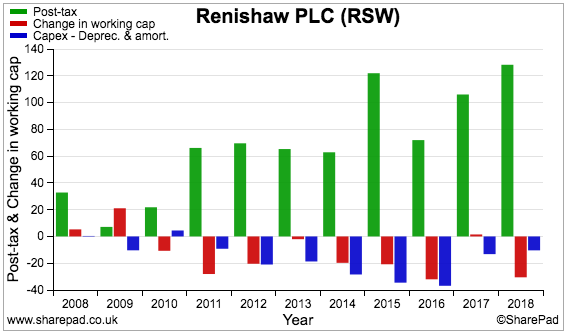 For some perspective, during the last five years Renishaw’s earnings have totalled £512m.

In comparison, aggregate working-capital movements absorbed cash of £103m while the total excess capex over depreciation and amortisation came to £120m.

However, SharePad does show Renishaw operating consistently with a chunky 45% of revenue tied up in such working-capital items (the green line): 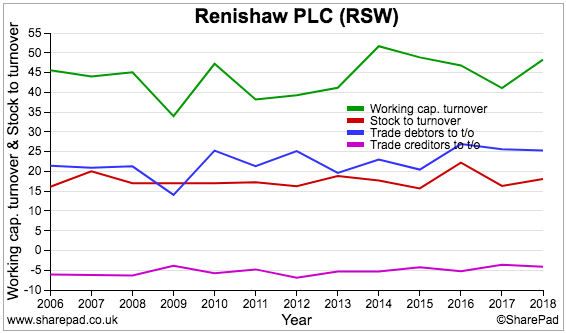 I can only conclude to generate extra sales and profit, the business must first commit significant amounts to working capital — which therefore limits free cash flow.

Further investigation reveals the net book value of freehold land and buildings has advanced from £77m to £143m during the last five years.

The cost of constructing new buildings is therefore another reason why free cash flow has been limited.

How to capitalise development costs and not flatter earnings

Now for a short note about Renishaw’s development costs.

…and how such cash costs were much higher than the associated amortisation charged against earnings.

Here are the relevant five-year figures for Renishaw:

(All figures in £thousands)

The annual difference between Renishaw’s capitalised development costs and the associated amortisation charge is generally less than £3m — a minor amount given operating profit has averaged £100m during the same five years.

Suffice to say, Renishaw’s accounting shows how companies can capitalise their development costs — and not significantly flatter their earnings!

What free cash Renishaw has generated has been distributed mostly as dividends, with little spent on acquisitions and nothing on buybacks: 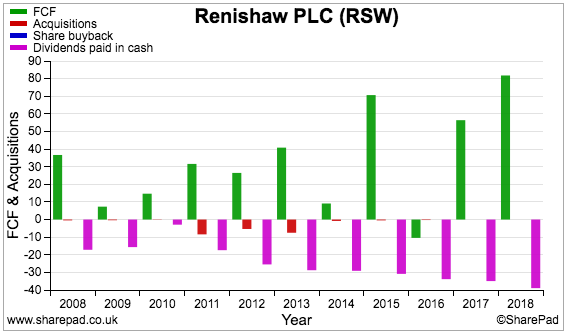 The business has enjoyed a consistent cash-flush balance sheet and minimal (if any) debt: 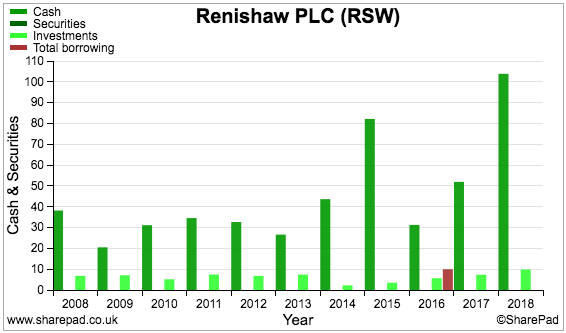 However, Renishaw does carry an irritating pension deficit. The scale of the deficit is sadly significant compared to annual earnings: 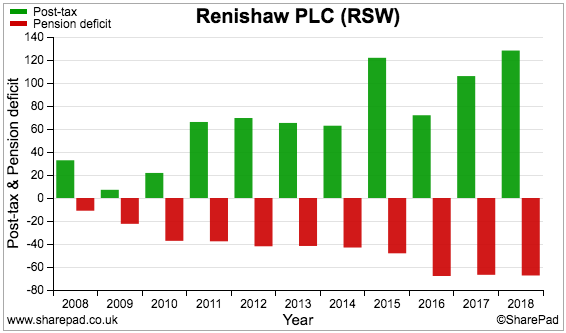 I am afraid a pension-accounting overview is now in order.

The regulator was unhappy with the pension funding

Pension deficits occur only at companies that operate a defined-benefit (or final-salary) pension scheme.

Scheme assets are easy to calculate — they are simply the value of the assets (shares, bonds, cash, and so on) at the balance-sheet date.

Scheme liabilities are much harder to determine. All sorts of guesswork is applied to estimate how much (in today’s money) the scheme will pay out as future pensions.

In theory at least, Renishaw needs to inject an extra £67m into the fund to ensure all the expected pensions are paid.

The annual report reveals the scheme enjoys a charge over certain group freeholds:

Furthermore, the scheme could take ownership of those freeholds if the deficit is not cleared by 2031:

Although the next 12 years to 2031 seems ample time to clear the deficit, the scheme has only once shown a surplus — in 2007 — since Renishaw first disclosed its pension figures in 2004.

(Also bear in mind the scheme deficit has advanced from £19m to £67m during the last 12 years.)

Renishaw has previously admitted The Pensions Regulator was unhappy with the scheme’s funding arrangements:

Interim results issued during January then confirmed the company’s pension contribution would be lifted from £5m to £9m a year.

The vagaries of pension accounting effectively allow these ‘catch-up’ contributions to escape being charged to reported earnings.

The aforementioned Sir David McMurtry must surely be among the country’s most successful and durable entrepreneurs.

Sir David certainly appears to be a keen Renishaw investor — he last trimmed his 36% shareholding 30 years ago.

You may be pleased to know that, while Renishaw’s dividend has grown at a compound 9% average during the last ten years, Sir David’s own salary has advanced at only a 1.5% average.

The downside to Sir David is that he turned 79 last month, so is unlikely to be in charge for another 46 years.

The heir apparent is chief executive Will Lee, a mere whippersnapper at 44 years old.

Mr Lee joined Renishaw as a graduate in 1996 and became chief exec last year. Mr Lee is assisted by a 50-year-old engineering director that has served on the board since 2002.

I will let you decide whether the younger directors will be able to match Sir David’s leadership and ability when they take full charge.

You can see the products for yourself next month

During the early months of 2009, the firm blamed the “exceptional and unprecedented global recession” for causing sales to dry up, profits to turn into losses and 437 redundancies (20% of the workforce). 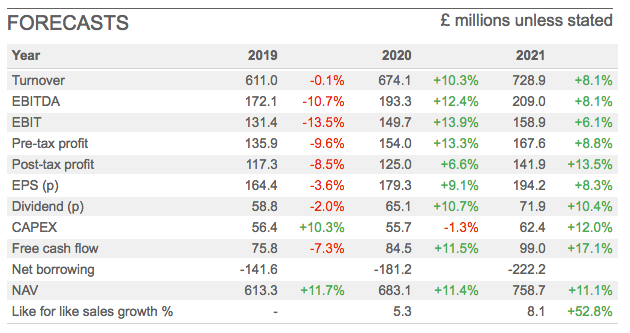 “Revenue growth is unpredictable and orders from customers generally involve short lead-times with the outstanding order book at any time being around one month’s worth of revenue value.”

I dare say deeper economic uncertainties may even call the recently reduced projections into question.

Still, Renishaw has pulled through troubled times before and — backed by a huge cash reserve — will undoubtedly do so again. 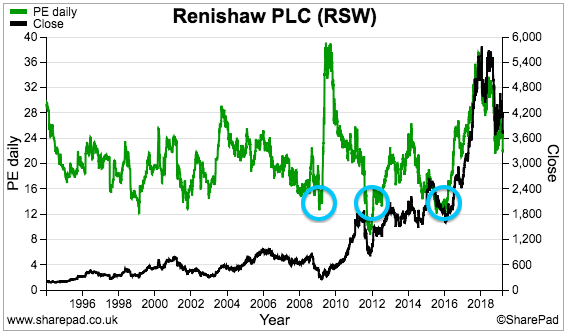 I must round-off by applauding Renishaw for hosting an annual investor day.

This year’s event takes place on Tuesday, 14 May at the group’s Gloucestershire HQ and anyone can attend (although places are limited).

I plan to go in order to learn more about the products and prospects of this very impressive business.

I may even have the opportunity to enjoy a quick word with Sir David.

Disclosure: Maynard does not own shares in Renishaw.