Screening For My Next Long-Term Winner: Abcam 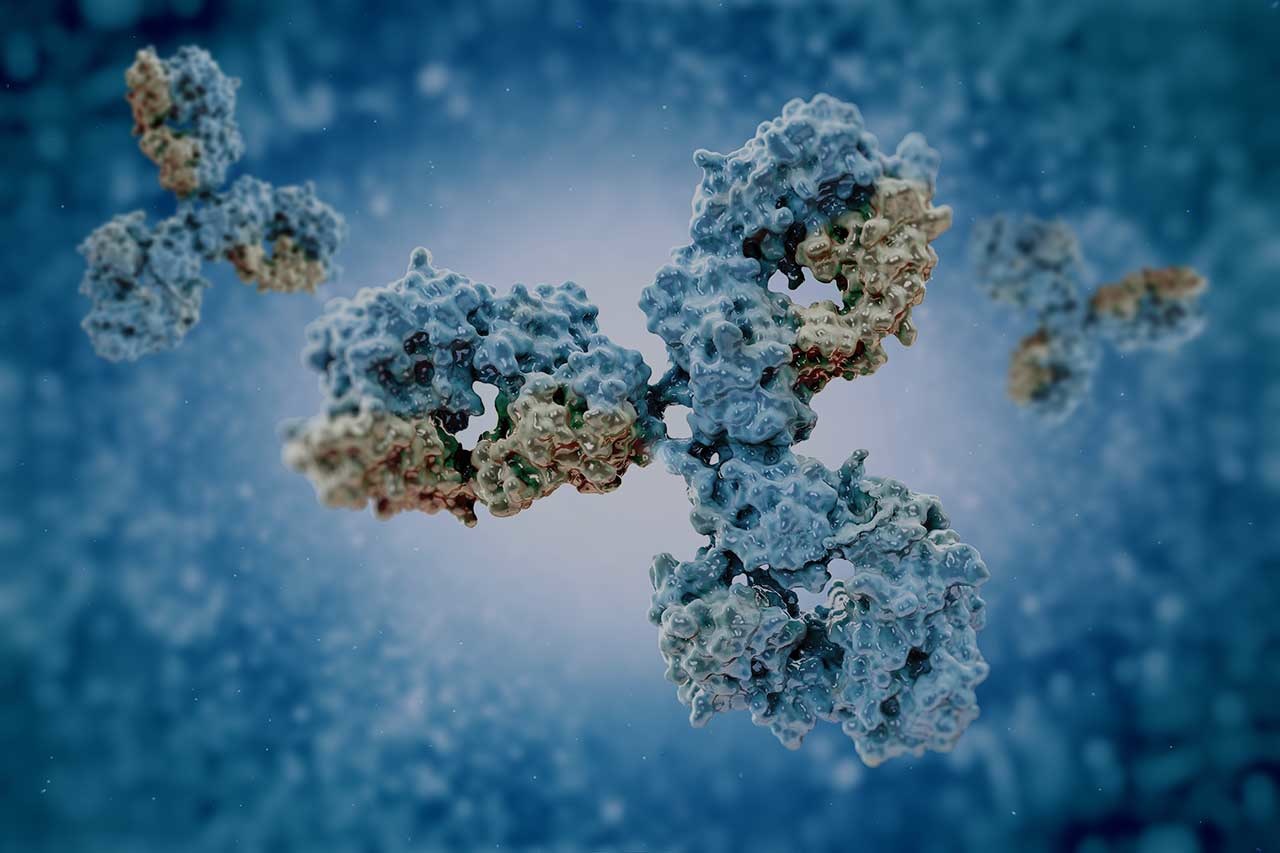 Today I have returned to the share screen I employed to pinpoint Victrex the other week.

Any business with a margin and ROE above 20% is probably quite special.

To narrow the field down further, I also sought companies that carried net borrowings of less than zero (i.e. net cash):

(You can run this screen for yourself by selecting the “Maynard Paton 25/04/19: Victrex” filter within SharePad’s ace Filter Library. My instructions show you how.)

This time I selected Abcam, a £2.6 billion AIM company that develops and sells antibodies. 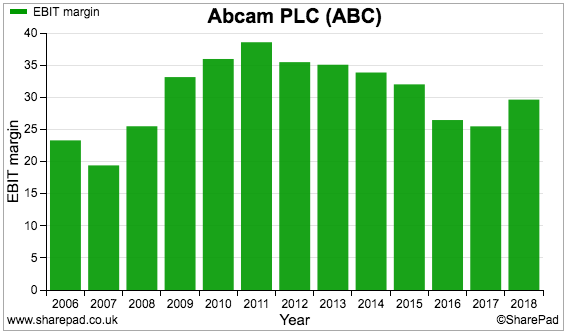 The operating margin has almost always exceeded 20% and has generally topped 25% and occasionally 35%. Such high profitability indicates a strong competitive position. 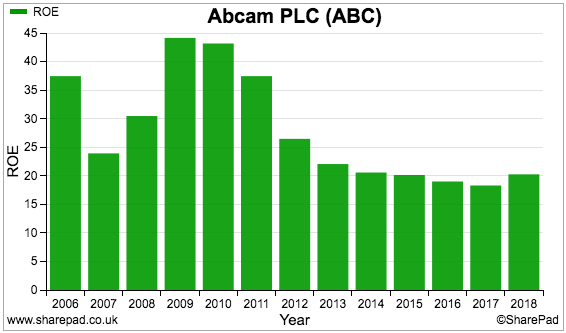 The figure has nevertheless recovered to once again surpass 20% (albeit only just), and the general ROE history suggests the company is very effective at reinvesting earnings for future growth.

The consistent 20%-plus margin and 20%-or-so ROE has supported an incredible 38-fold share-price gain since the shares floated at 33p back in 2005: 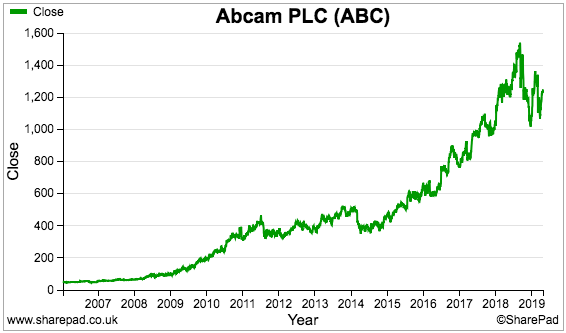 However, the price is currently 15% off the £15 high recorded during August.

Causing some concern perhaps were interim results published during March.

Although sales gained 11%, adjusted operating profit and the dividend advanced only 4% — a rather pedestrian performance for a business with such a wonderful margin and ROE pedigree.

Abcam said it remained “confident that the long-term investments we are making will enable us to sustain our low double-digit growth trajectory with attractive margins.”

That remark suggests the company is undergoing a significant investment phase.

Let’s dig deeper and see what is going on.

The history of Abcam

“I can’t stand these antibodies. They’re really rubbish. You know what Johnny, we ought to make a company. Why don’t we start a company making antibodies?” 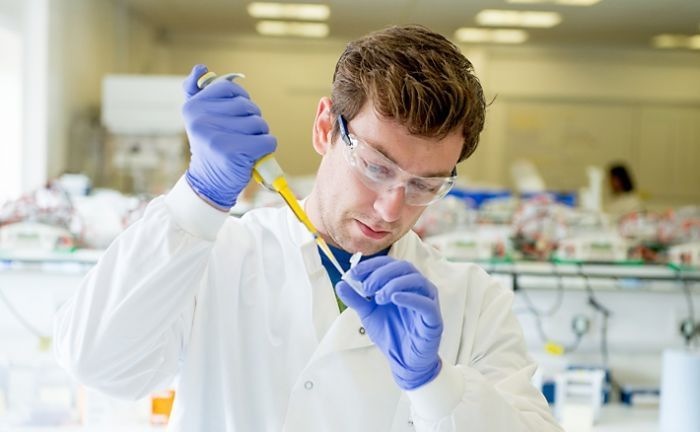 According to this excellent interview at investedinvestor.com, Dr Milner’s early business efforts involved visiting various Cambridge laboratories, asking what antibodies the staff required, and then producing custom antibodies through a sub-contracted manufacturer.

A basic website was launched during 2000, which was followed by an online ‘catalogue’ — where the most important feature was the accompanying scientific data for every listed antibody.

Employees would test each catalogue antibody in-house for a common research application, and the resultant data would in turn help the lab customers select the appropriate product. 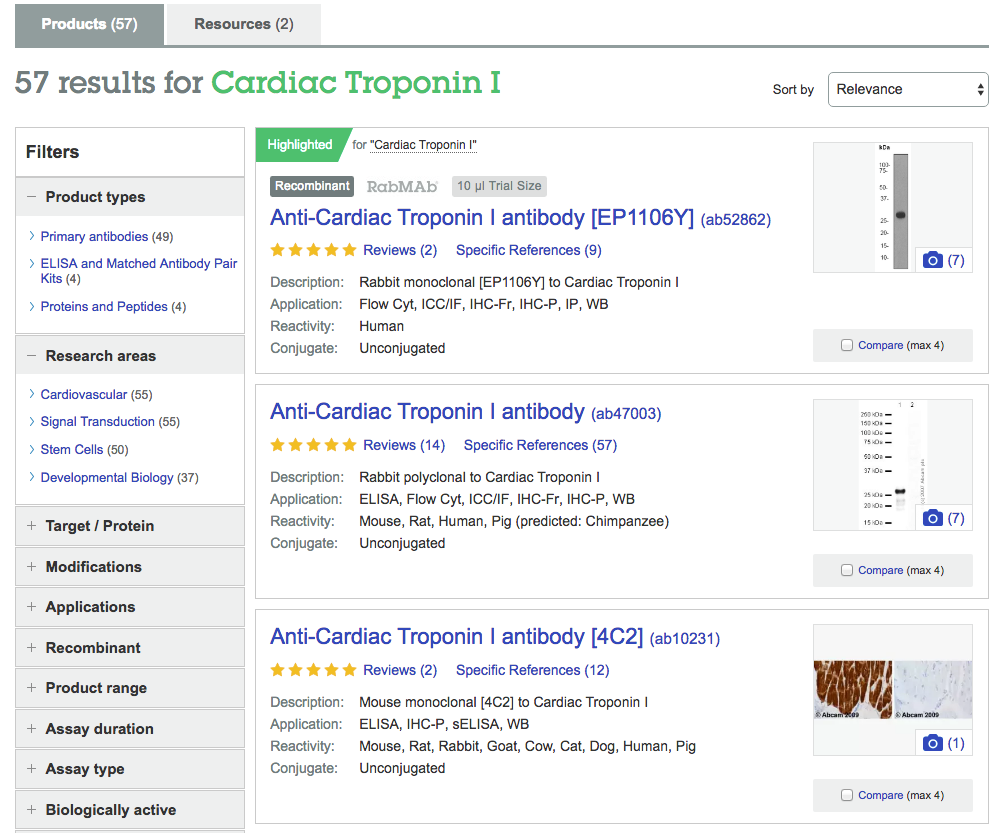 Another trick to encourage sales was inviting customers to publish their own data by leaving reviews on the company’s website: 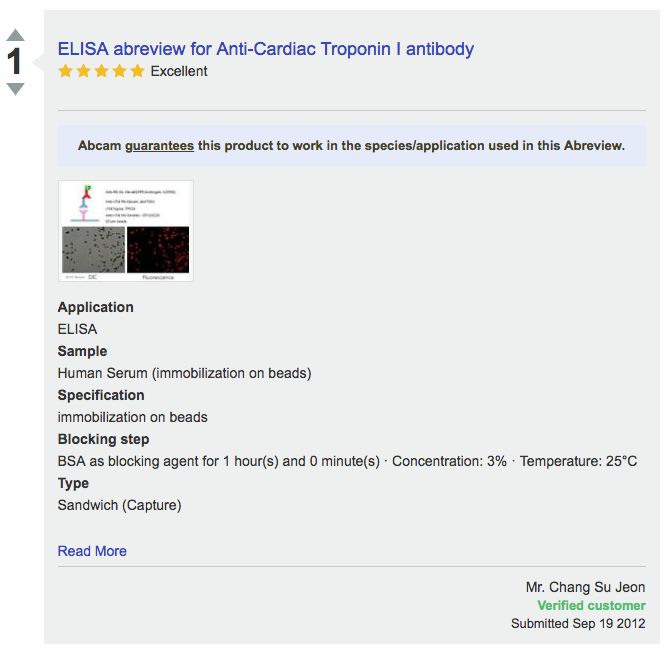 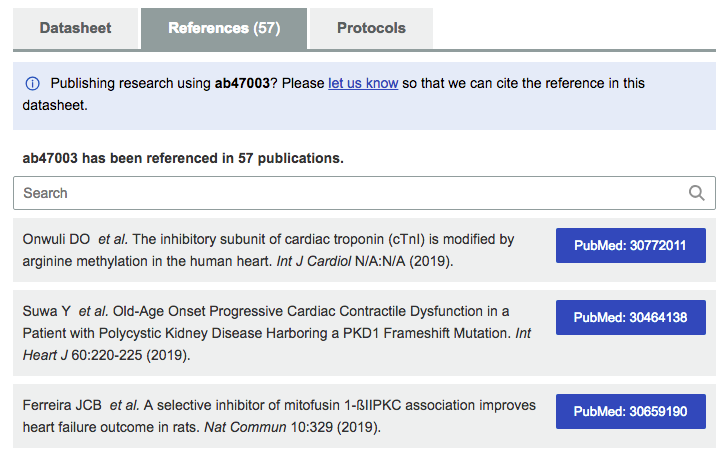 Abcam’s early, Amazon-style approach to selling antibodies took off and by the 2005 flotation, the website listed more than 17,000 antibodies — of which less than a 1,000 were made by Abcam and the rest sourced from various suppliers.

These days Abcam’s website lists more than 118,000 products that include immunoassays, proteins, peptides, lysates, biochemicals as well as antibodies.

Some 19,000 antibodies have been developed within the company that today generate 45% of group revenue. 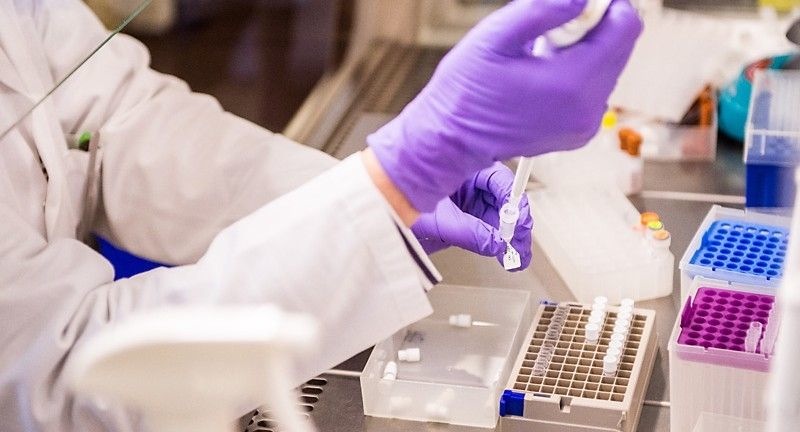 Abcam claims to enjoy a 23% share of the c$1 billion research-antibody industry, and two-thirds of life-science researchers worldwide apparently use the group’s services.

Important sales markets include the United States, China, Japan, the UK and Germany.

…and propelled revenue, profit and the dividend consistently higher: 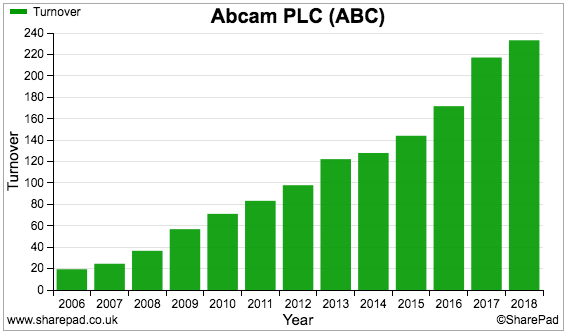 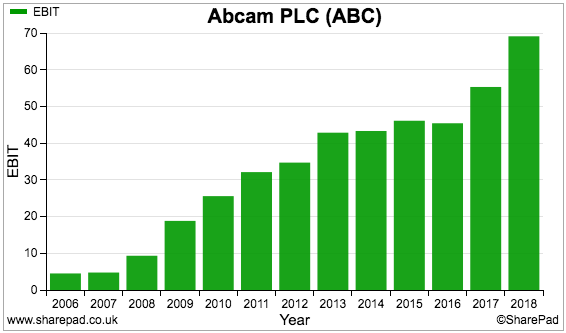 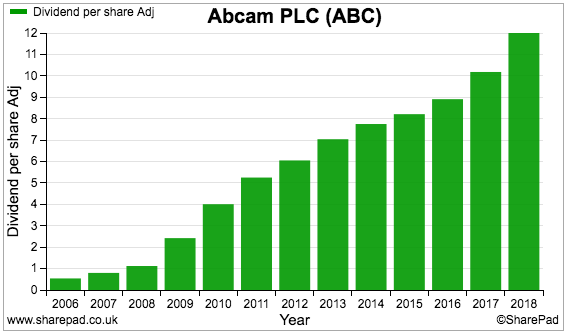 Abcam’s SharePad Summary is shown below: 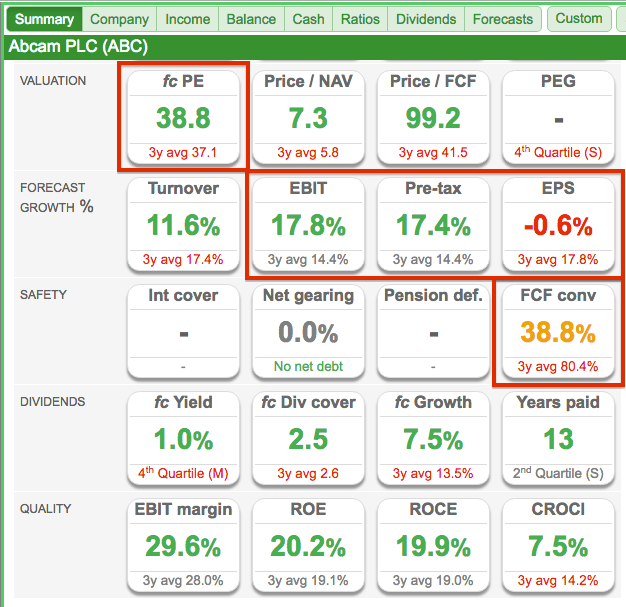 The following statistics caught my eye:

2) Revenue and profit are projected to advance during 2019, but earnings per share show a small decline (second row), and;
3) Earnings have not converted well into free cash (third row);

Let’s take a closer look, starting with the conversion of earnings into free cash.

However, 2018 was an unfavourable year for Abcam’s cash generation. The black line on the chart below (right axis) shows past earnings converting at rates of 80% or so: 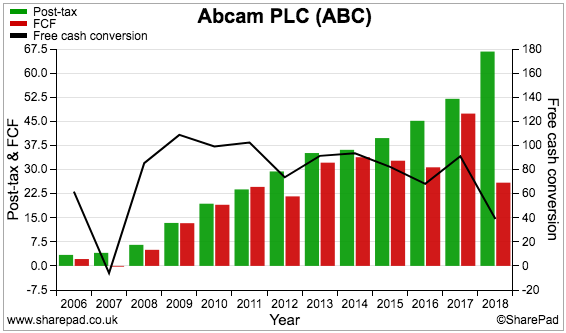 My Renishaw write-up explained how cash generation is often restricted by: 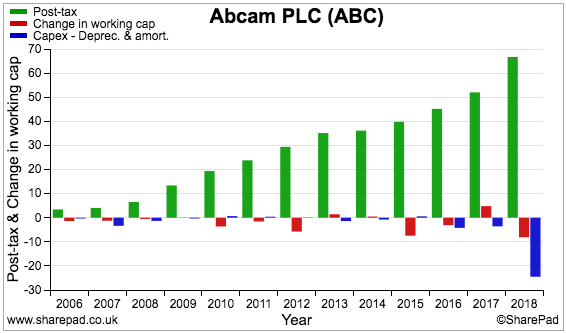 Ah, so the poor 2018 conversion was due to ‘excess’ capital expenditure (the blue bars).

This next chart shows the difference between depreciation/amortisation (green bars) and capital expenditure (red bars): 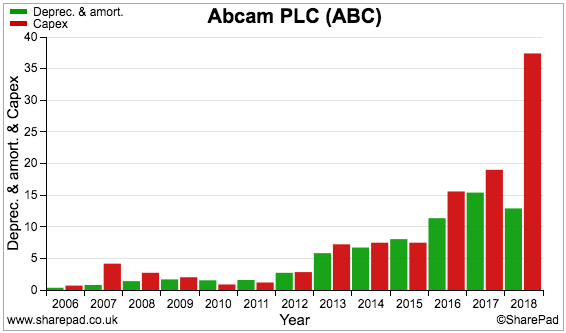 Implementing a new IT system and moving headquarters ought to be one-off projects, so Abcam’s cash conversion should in time revert to previous levels.

Abcam’s IT project has sadly blighted the group’s income statement.

I cottoned on to this by double-checking SharePad’s company-adjusted numbers.

These company-adjusted figures are found within the Income tab and represent the company’s own version of various profit measures (which typically exclude what the company deems to be ‘non-underlying’ costs!).

When I looked at Victrex the other week, its company-adjusted numbers were blank:

Victrex has therefore not felt the need to adjust its statutory accounts — a good sign for shareholders.

In contrast, Abcam has presented these company-adjusted numbers:

The adjusted post-tax profit figures are all between £2m and £10m greater than the statutory post-tax equivalents. 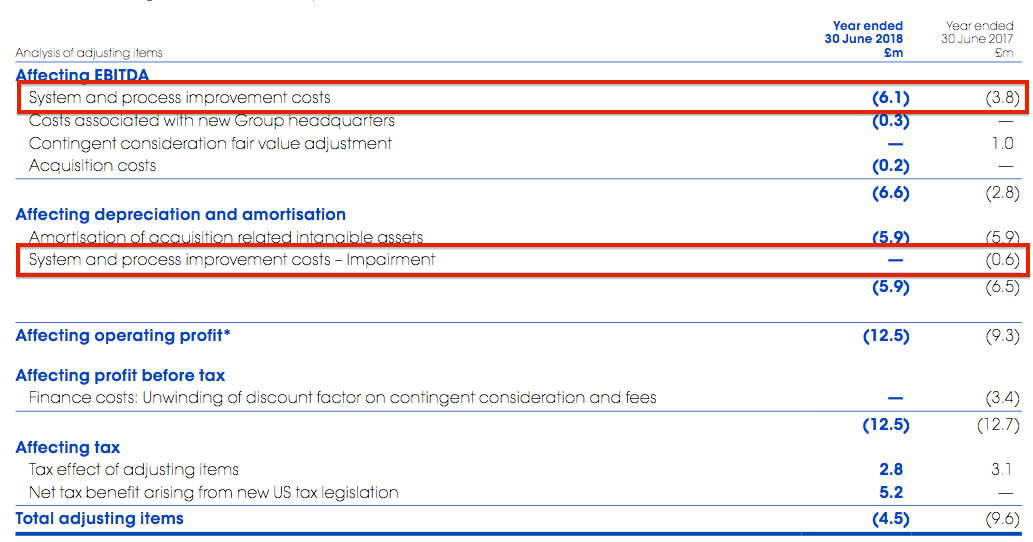 ”System and process improvement costs” relate to the ERP implementation and are the most significant items to focus on (the other items seem to be acceptable bookkeeping adjustments).

Older annual reports reveal Abcam’s ERP project commenced four years ago and has racked up costs totalling £56m — of which £16m has been expensed against earnings as ‘adjusting items’ and £40m has been capitalised on the balance sheet.

I have to say, £56m to implement any computer system appears ridiculously expensive — and this project still has another year or two before completion.

This whole ERP episode puts into question the company’s IT management — which is ironic given the business succeeded initially through becoming an e-commerce pioneer.

At least Abcam acknowledges the ERP implementation has taken longer and cost more than initially expected.

Despite the money thrown at the ERP, Abcam’s cash balance has grown while no debt has been taken on: 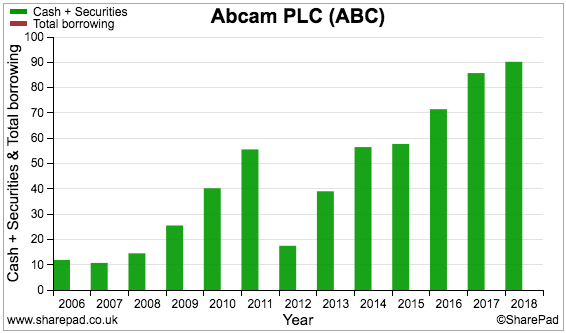 March’s interim statement said cash in the bank was £83m (or 40p per share).

The chart below shows the group’s free cash being spent mostly on dividends (purple bars) and acquisitions (red bars), with nothing on buybacks: 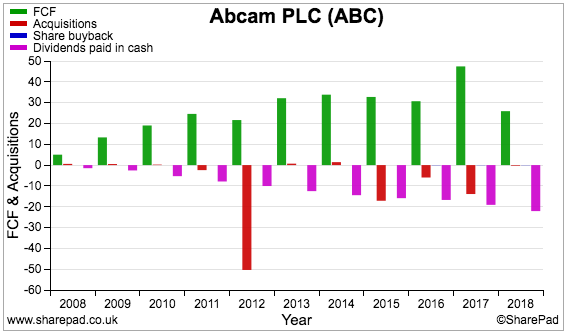 (Eagle-eyed readers may wonder why the chart above does not show the full £109m paid during 2012. About half of the purchase was funded by new shares, the issue of which is not reflected in company cash flow statements.)

Given Abcam’s annual profit during 2012 was £34m, spending £109m on an acquisition was a bold decision. The price-tag valued Epitomics at 7x sales and 25x operating profit.

The chart below shows how acquired goodwill (red bars) and all intangibles (including goodwill, blue bars) have grown to represent a greater proportion of Abcam’s balance sheet: 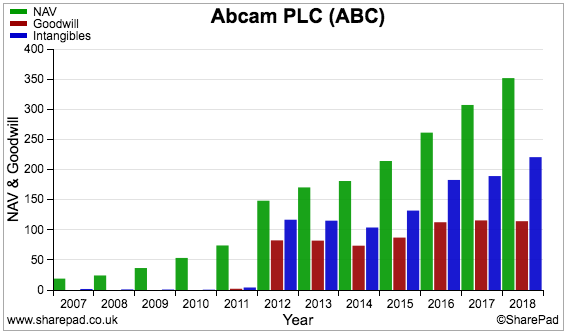 The 2018 annual report reveals goodwill and other intangibles relating to acquisitions total £176m. The ERP has a net book worth of £32m while in-house developments possess a £12m capitalised value.

Referring back to the earlier ROE chart, the decline from a 30%-plus ROE to 20% has coincided with the build up of goodwill and intangibles on the balance sheet.

I can only conclude such goodwill and intangible expenditure has delivered returns at a level somewhat lower than Abcam previously enjoyed.

The approach was rebuffed by Horizon, but signals Abcam’s intention to spend sizeable amounts to underpin a growth-by-acquisition strategy.

Horizon has yet to register a profit as a listed business: 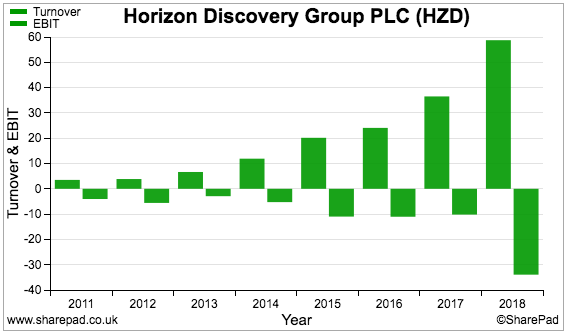 Had Horizon been acquired, Abcam’s ROE may now be running well below my screen’s 20% cut-off. 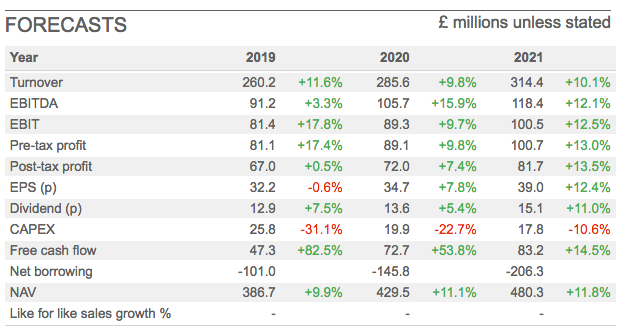 The 17%-18% improvements for EBIT and pre-tax profit are calculated using Abcam’s statutory — i.e. not company-adjusted — accounts.

The upshot from these forecasts is that Abcam’s ‘adjusted’ profit performance for 2019 is likely to be similar to that of 2018.

At least the projections suggest the group’s growth momentum could resume during 2020.

… and claimed underlying sector growth of up to 8% a year:

Note that 93% of Abcam’s 2018 revenue related to products within the slower-growing ‘research-use only’ part of the antibody market.

This next chart from Abcam is fascinating: 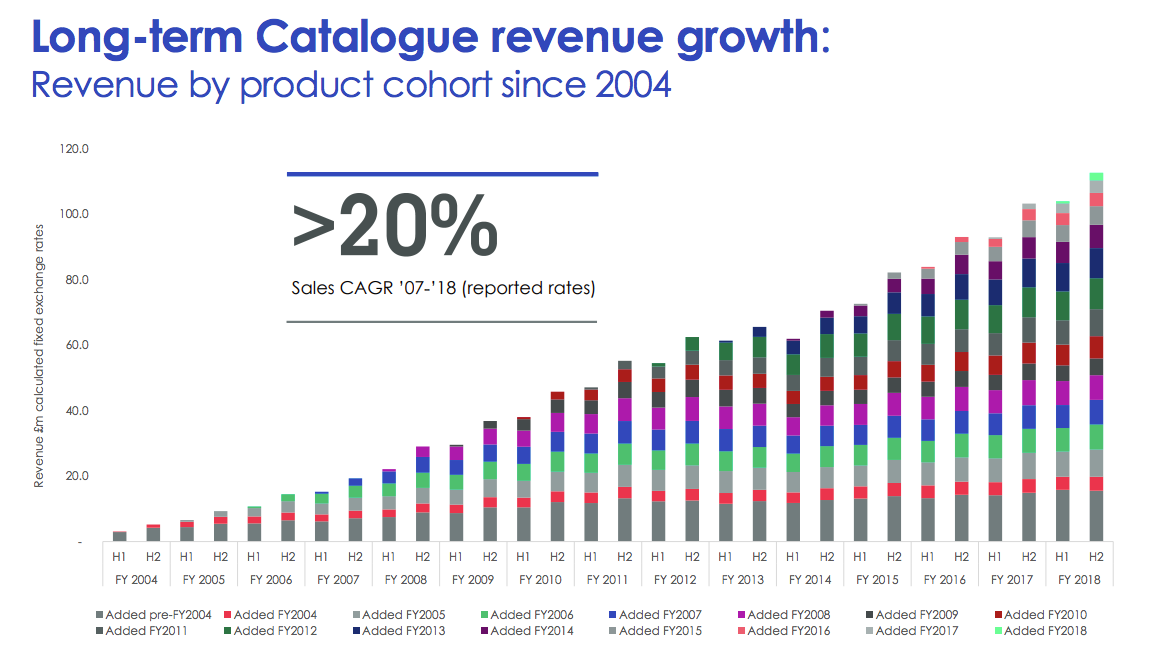 The coloured bars indicate revenue growth has been dependent mostly on adding new antibodies to the online catalogue, rather than customers buying existing antibodies in much greater volume.

Perhaps that is why Abcam valued Epitomics and Horizon so highly — both offered scientific products and tools outside of the research antibody catalogue.

The following charts do not show any major concerns.

Research and development expenditure has recently bobbed between 7% and 8% of revenue: 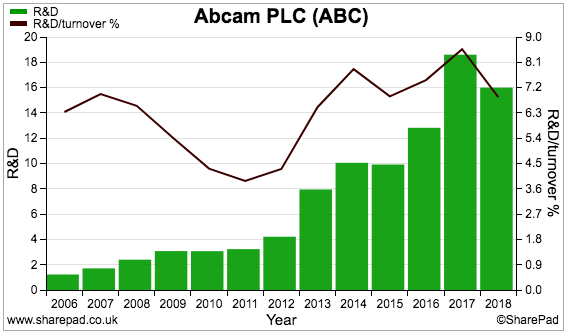 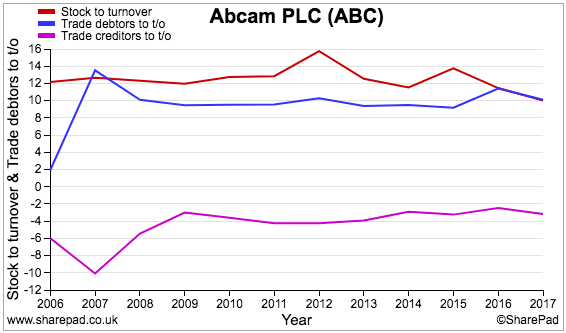 Excluding the shares issued to purchase Epitomics, the share count has increased on average by less than 1% a year: 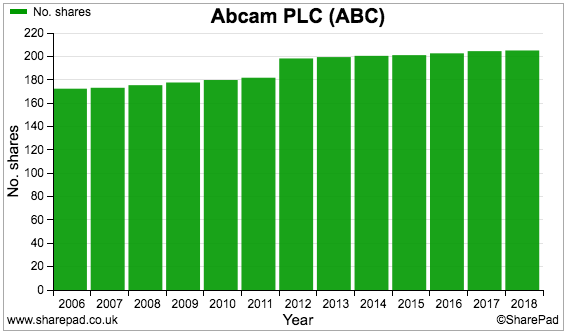 Revenue per employee tops £200,000 — a respectable level that suggests Abcam’s small army of Phd-qualified employees is being put to good use: Mind you, I see from my spreadsheet that the number of laboratory employees has increased by just 23 during the last few years — versus 300-plus for other workers:

I would have thought more lab staff would be needed given Abcam’s plans involve becoming more dependent on in-house antibody development.

Although the aforementioned Jonathan Milner retired from the position of chief executive during 2014, he remains on the board as a non-executive.

SharePad shows he owns 10% of Abcam, a stake worth approximately £250m:

Dr Milner had owned 28% of the company at the flotation. SharePad reveals he last reduced his stake during September, when he raised more than £16m after selling at £14.41:

I should add Dr Milner reinvested £2m back into Abcam a few months later at £10.60:

Alan Hirzel succeeded Dr Milner as chief executive and sadly may not have the same ‘owner’s eye’.

The bulk of Mr Hirzel’s shareholding has been derived from options and his total pay, bonuses, pension contributions and LTIPs last year came in at a healthy £1.8 million.

Not everyone is happy with Abcam’s pay arrangements. The last AGM witnessed significant votes against the remuneration resolutions:

I suppose Abcam’s attitude to executive pay may explain the mindset behind the generous budgets for the company’s ERP system and acquisition strategy.

The recently appointed chairman is disliked, too:

Mr Allen is chairman of three other quoted companies.

When speaking to investedinvestor.com, Dr Milner recounted how he attracted Abcam’s first investor:

“David said to me, “So how much does it cost to make one of these units of antibody?”

And I said to him, “It’s about three to five pounds for a unit of antibody.”

The economics of making and selling antibodies certainly appear just as favourable today as they were 20-plus years ago.

Abcam’s margins are superb and even with vast amounts spent on incomplete IT systems and low-profit acquisitions, ROE also remains impressive.

Abcam’s illustrious history is reflected by a share price (black line, right axis) that has rarely traded below 20x earnings (green line, left axis) and is valued presently at 39x: 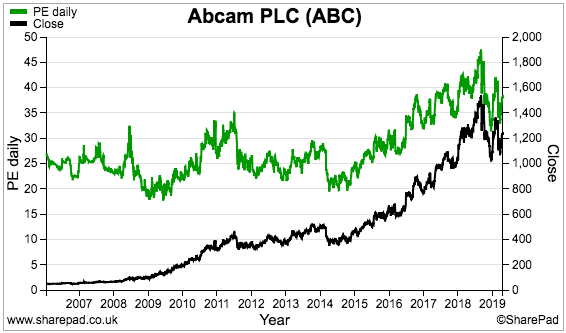 The punchy rating is perhaps not too surprising given the group’s prominent position in an industry said to be growing at up to 8% per annum. 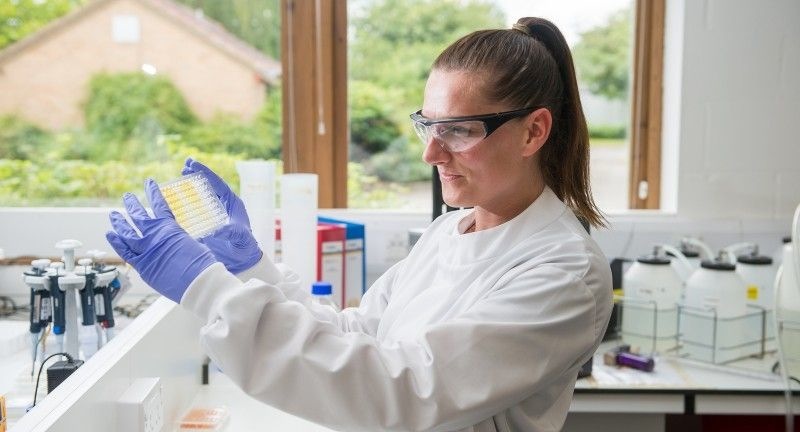 That said, Abcam is not perfect.

The firm’s shift to develop regulated antibodies for diagnostic and therapeutic use is certainly very different from selling third-party research antibodies online.

Indeed, a lot more money seems likely to be spent expanding the business in the future than has been spent in the past. Whether the returns will be as lucrative, though, is difficult to say.

The directors have not covered themselves in glory either.

The bungled IT system, the shareholder dissent over pay and the rebuffed proposal for Horizon suggest the board is prone to misjudgements.

Still, Abcam itself has powered on regardless — which tells you something about the underlying strength of the business.

As such, perhaps the 38-fold share-price gain is not the end of the story just yet.

Disclosure: Maynard does not own shares in Abcam.