Screening For My Next Long-Term Winner: IG Group 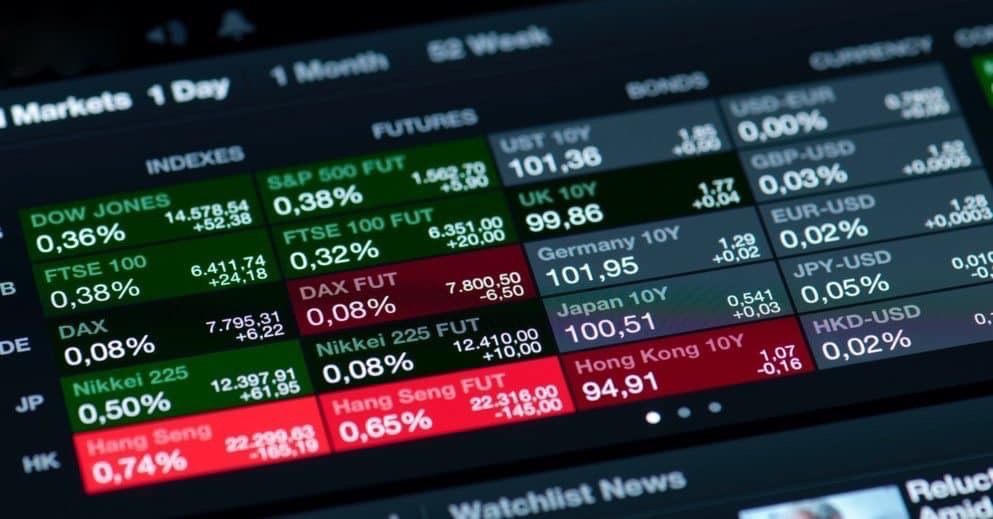 For some time now IG Group has been flashing on my SharePad filters.

Those characteristics are an unusual mix in a market presently bereft of obvious quality bargains. 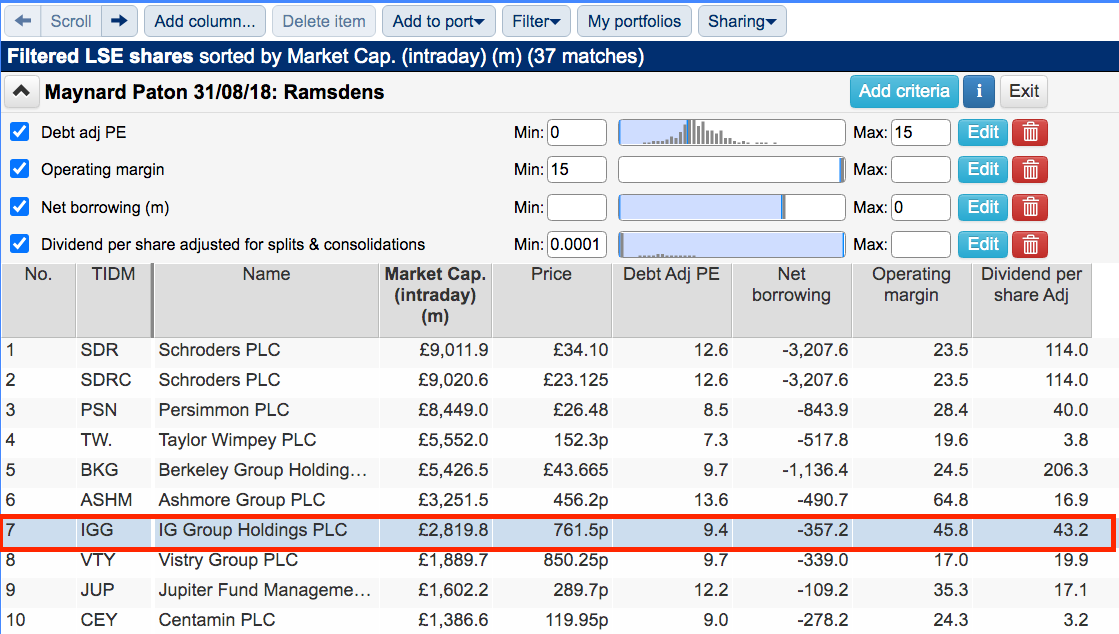 (You can run theses screens for yourself by selecting the “Maynard Paton 24/09/19: Medica” , “Maynard Paton: 31/08/18 Ramsdens” and “Maynard Paton 25/04/19: Victrex” filters within SharePad’s illustrious Filter Library. My instructions show you how.)

IG was established during 1974 by Stuart Wheeler as Investors Gold Index.

Located initially on the top floor of Mr Wheeler’s Chelsea home, the business was the first to allow traders to speculate on the price of gold without buying the physical commodity.

IG has since evolved to become “the world’s No.1 CFD provider”. The group’s 238,600 customers employ contract-for-differences and spread-bets to trade a vast range of equities, indices, commodities, options, currencies and cryptocurrencies on margin. 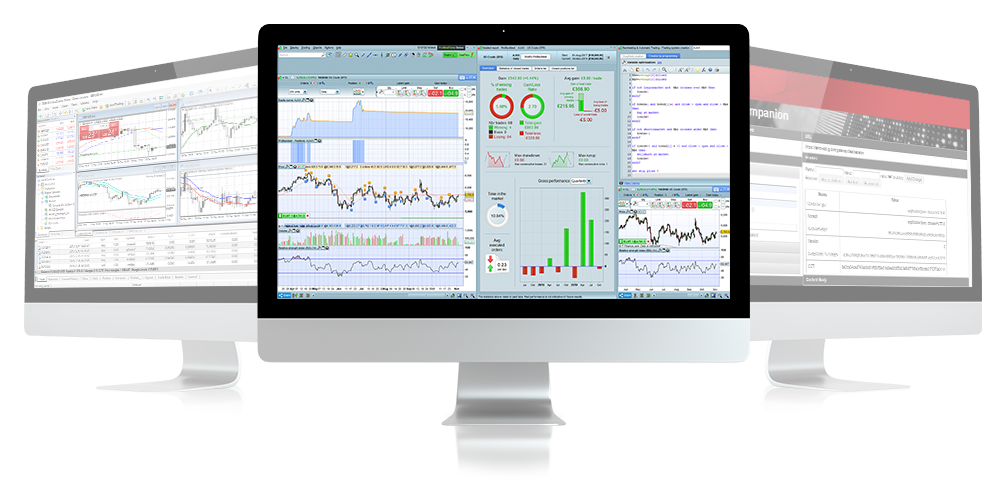 Growth has been supported by foreign expansion, with the first overseas office opened during 2002. The business today now serves traders within Australia, Europe, Japan, Singapore and the United States.

Being the first trading firm to launch an online dealing service (1998) and mobile app (2003) also went some way to attract additional customers.

IG floated during 2000 and was subject to a management buy-out during 2003. The business re-floated during 2005 at 120p and the share price has since rallied more than six-fold to support a £2.8 billion market cap: 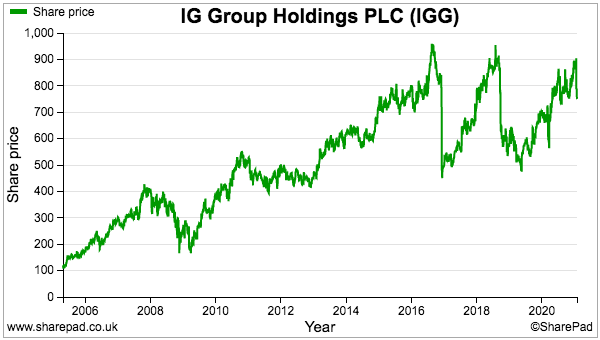 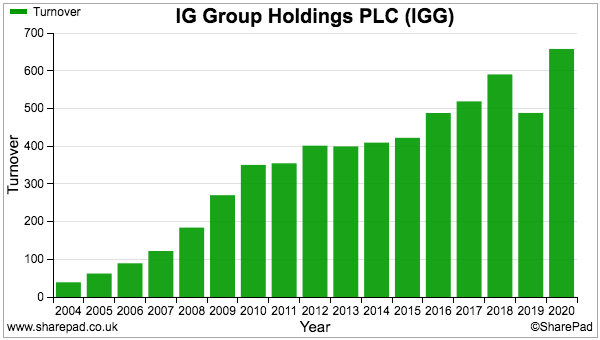 However, profit has endured some ups and downs: 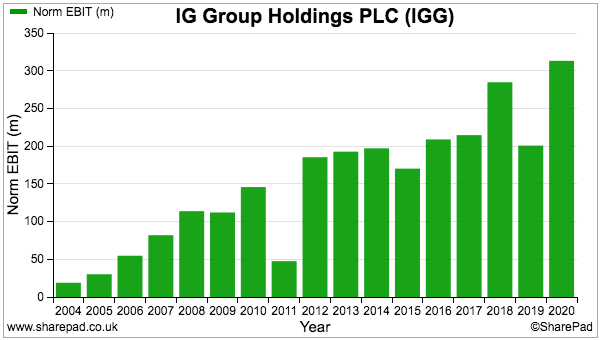 The dividend has never been cut, but has been not been lifted for the last two years: 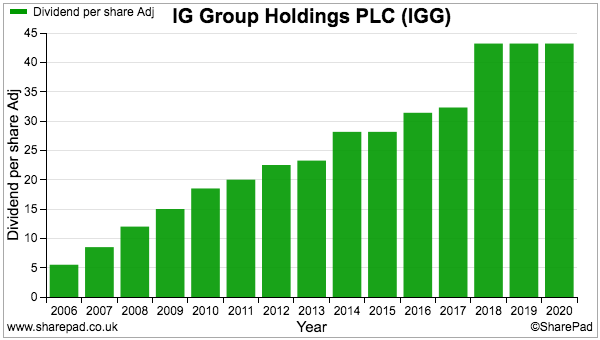 The financial history is not perfect and reflects IG’s sensitivity to fresh regulation and surprise market developments. Notable events include:

Another influence on earnings is market volatility and client activity. IG’s 2020 results confirmed trading levels had surged during the crashes in both the equity and oil markets:

Net trading revenue for the first nine months of the financial year gained 9%, but soared 119% during the fourth quarter to lift full-year profit by 53%. 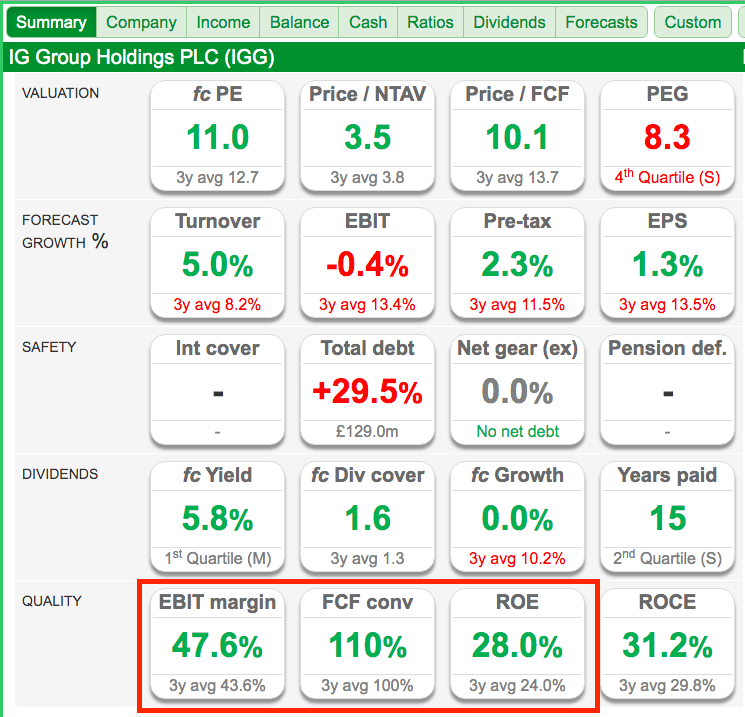 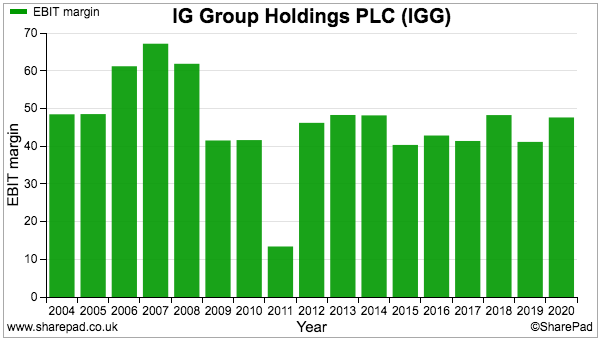 Return on equity meanwhile has typically shown a healthy level of at least 20%: 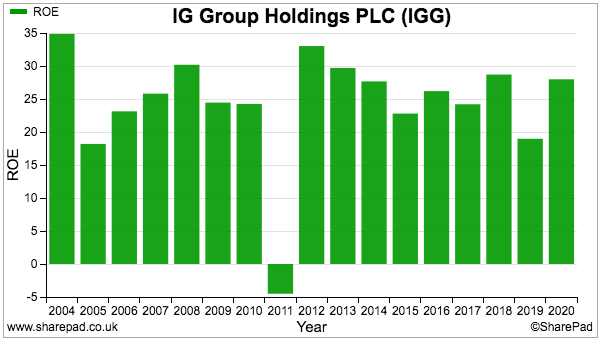 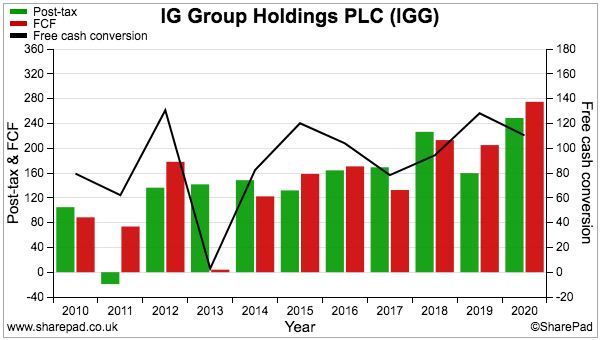 The cash generation has ensured the cash position has climbed nicely, and debt has been employed only for the last two years: 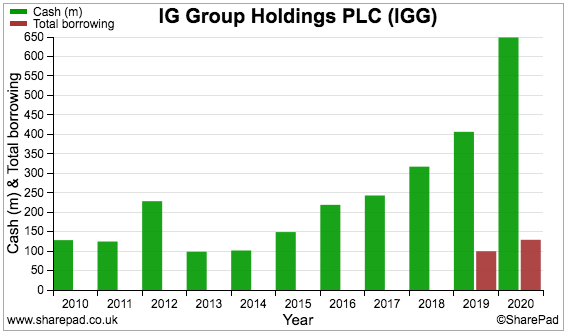 Accompanying the figures was the announcement of a $1 billion (£734 million) acquisition. IG is to purchase tastytrade, a “disruptor in the US retail options and futures market”.

This “landmark transaction” could make loyal investors understandably nervous. The deal is large — the price is twice IG’s trailing earnings — and the anecdotal record of UK companies buying big in the States is not great.

The lower value applied to each tastytrade client is due to the lower commissions they pay.

Revenue per average tastytrade client during 2020 was a little more than £1,000, while IG’s core CFD/spread-bet traders currently generate revenue in excess of £2,300 a year. 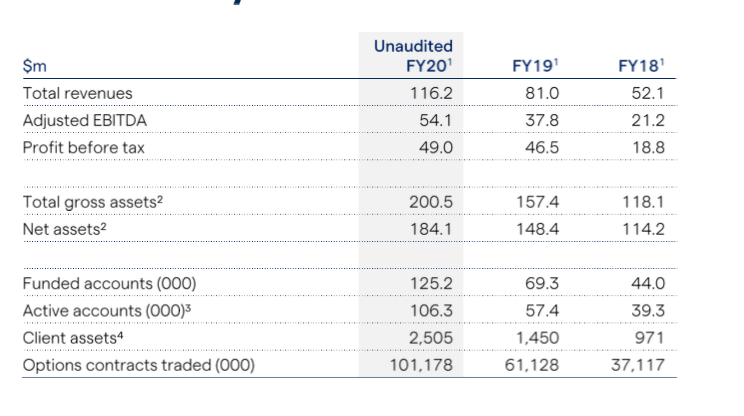 US regulations allow tastytrade to promote its services very differently to how CFDs (and similar) can be marketed within the UK. Visit IG’s main website and you are confronted immediately with a risk warning about how 75% of customers lose money:

Visit tastytrade in contrast and you are invited simply to “trade boldly”:

tastytrade’s growth has been driven by video content hosted by founder Tom Sosnoff (the chap on the left): 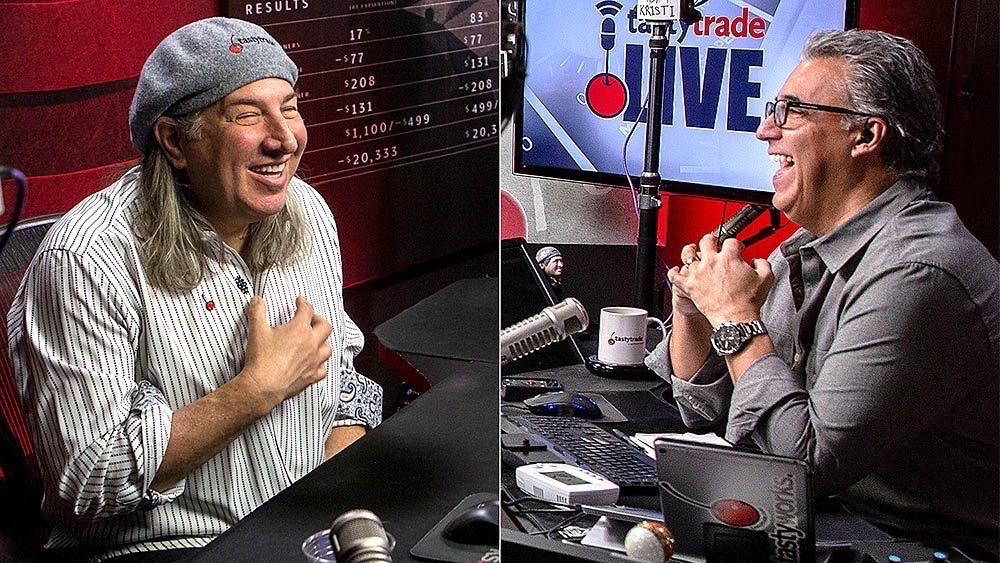 Mr Sosnoff looks an unconventional character, and whether he and his co-owners will remain as motivated working for IG following a collective $400 million windfall remains to be seen.

Although the acquisition announcement referred to the groups’ shared “strong culture and client-centric ethos”, the text did not mention a shared approach to strong risk management.

IG is proud of its own hedging controls, which have ensured the firm has not suffered a loss-making day since 2015.

Large acquisitions should always prompt a double check on management – who is leading the deal and can shareholders trust their judgement?

The jury is out for now. IG’s board has undergone significant changes of late and investors do not have a lot to go on.

The present chief executive has been in charge since 2018, while the finance director and chairman came aboard last year:

At least the chief operating officer has worked at IG since 2000.

Recruiting June Felix as chief executive was unusual for IG. Although Ms Felix had been an IG non-exec since 2015, the group had previously always appointed executive insiders for the top job.

Following the aforementioned Stuart Wheeler, IG’s three subsequent bosses were all main-board executives for at least seven years before taking the top job.

The revamped board – alongside the new executives, five non-execs have served for less than three years – could mean IG’s future strategy differs markedly from that of the past.

Ms Felix has commendably outlined her growth targets. She expects revenue for 2022 to be 30% higher than that recorded for 2019 — and her projection excludes any contribution from tastytrade. Japan, China/Hong Kong, new EU services and institutional clients are the areas that hold the most promise.

The worry here is the new management wish to give investors less information because those KPIs are expected to deteriorate over time.

Perhaps the most curious leadership issue relates to executive bonuses. The directors become entitled to an annual bonus even if profits decline.

The 2020 annual report reveals diluted earnings per share had to come in at 35.4 pence or more for the executives to earn an element of the annual bonus:

Diluted EPS the year before was in fact 42.8 pence, which meant EPS could have dropped 17% during 2020 and the directors would have still collected a bonus.

Perhaps the remuneration committee wanted to make up for the previous year, when a minimum target of 44.2 pence was set — and actual earnings of 42.8 pence ensured no EPS-related payout was awarded:

Sure, IG’s earnings can be volatile and UK/EU regulatory changes the other year did reduce profits. But awarding bonuses for lower earnings does not sit right with me.

I will leave you to interpret the lack of shares held by the non-execs:

I recall recommending IG’s shares back in my share-tipster days during the financial crash of 2008.

A long-term concern I had back then was IG (and the industry) would eventually run out of clients. After all, that risk warning says 75% of IG’s clients lose money and a recent City presentation confirmed only 20% of new customers are retained after three years:

Yet revenue at the group’s UK division has almost doubled since my share tip 12 years ago.

Indeed, the pandemic/oil volatility of 2020 and now the GameStop exuberance suggests the industry will in fact never be short of novice punters wanting to gamble on the markets. 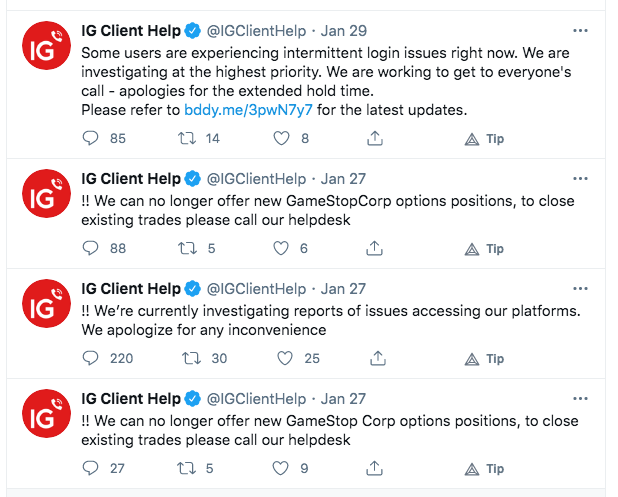 …and the updates prompted scores of replies from grumpy clients.

How long the pandemic trading bonanza is likely to persist is difficult to judge. SharePad’s broker forecasts look extremely dated:

Following the recent interims, twelve-month revenue, pre-tax profit and EPS presently run at £825 million, £426 million and 94 pence respectively — well ahead of all the projections shown above. And those calculations do not include anything for tastytrade.

I reckon the shares trade on a trailing P/E of 9, which seems very modest and presumably reflects the bumper trading eventually subsiding. IG has admitted mature markets such as the UK are likely to grow long-term revenue at only 3%-5% a year.

Note that IG’s shares have typically traded on a subdued rating. Buying on a P/E of 12 and collecting a 5% or so yield has not been hard during recent years: 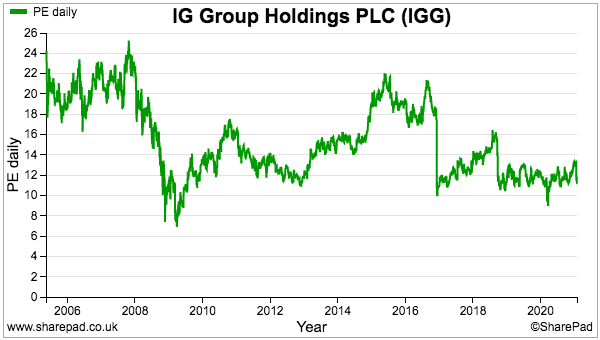 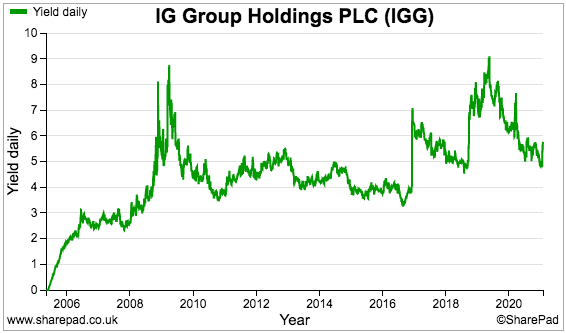 All told, the shares do not look expensive given the group’s industry standing and financial history.

I am not sure about IG’s management and the US acquisition, but I reckon the business would survive mishaps with both. Stricter regulation and/or a relapse in hedging controls are perhaps the greatest risks here.

Right now one thing is certain: events with GameStop prove the basic human desire to make a quick buck has not died out just yet. But holding IG’s shares should for most people give a better return than short-term speculating in frothy markets.

Disclosure: Maynard does not own shares in IG Group.