Screening For My Next Long-Term Winner: Games Workshop 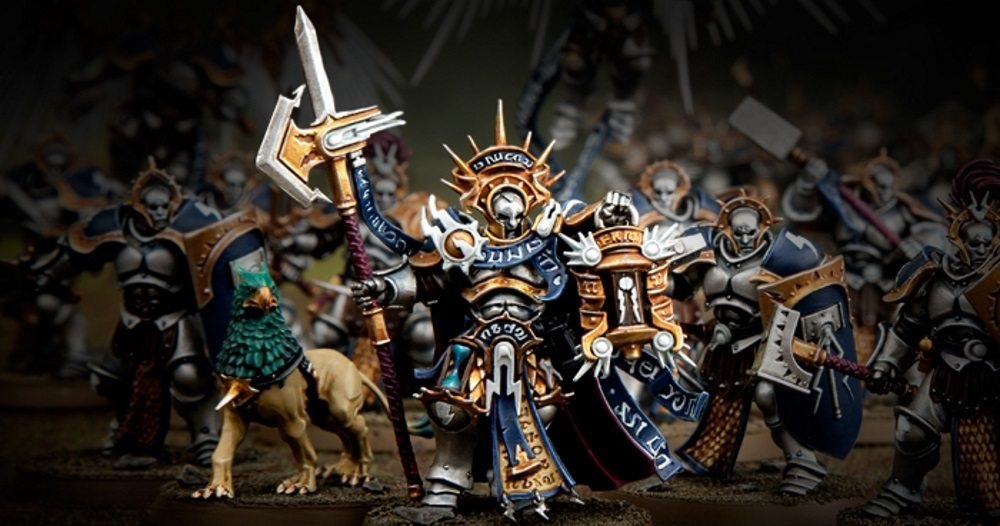 Could now be the time to return to dynamic growth shares?

Wonder-stocks such as Fever-Tree, Boohoo.com and Keywords Studios are all well below their highs of 2018…

…and I wonder whether the widespread selling has created a super-growth bargain somewhere in the market!

Let’s employ SharePad to find out.

I bought the shares at £8

For this market search I demanded companies that offered a history of fantastic earnings growth alongside a relatively reasonable valuation.

To narrow the field down further, I wanted only cash-rich companies that paid a dividend.

The exact criteria I used were:

1) Annualised earnings per share growth of at least 25% during the last five years;

4) A dividend yield greater than zero.

I added a fifth criteria to exclude house builders:

5) Not a member of the Home Construction sub-sector.

I don’t really class house builders as super-growth businesses, and no doubt they will crop up in future screens anyway. (Eight house builders were excluded from this search.) 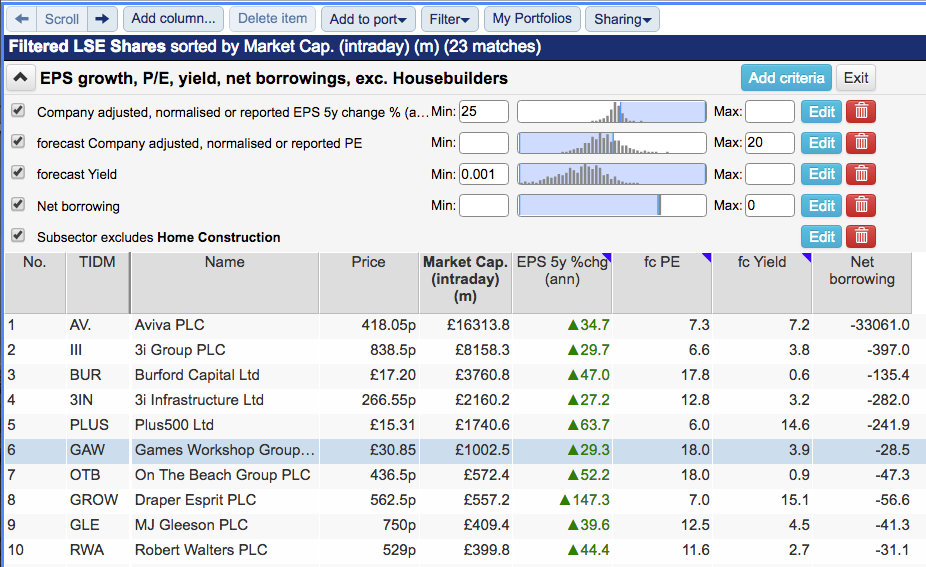 (You can run this screen for yourself by selecting “Maynard Paton 30/01/19: Games Workshop” in SharePad’s amazing Filter Library. My instructions show you how.)

Games Workshop stood out among the 23 matches.

I chose this company because:

2) I have visited the company’s HQ and spoken at length with the executive management.

Look at the share-price chart below: 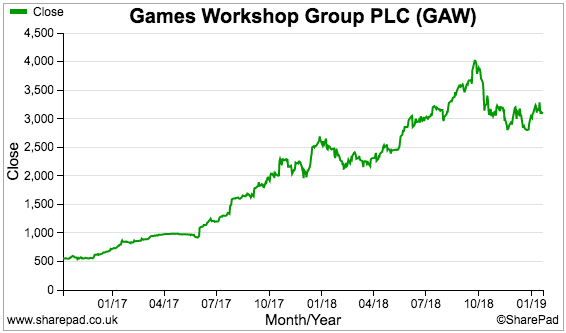 You may now think I am an investing genius for buying at £8 when the price is currently £30 having traded as high at £40. 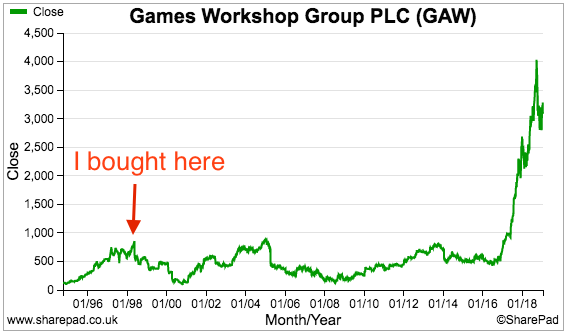 My overall investment was therefore not great but not a complete disaster either.

Anyway, that longer-term chart leads me to ask two questions:

1) Why did the shares essentially go nowhere for 15 or more years, and:

2) What on earth happened during 2016 to ignite the share price.

Let’s use SharePad to find some answers.

Dungeon & Dragons and Lord of the Rings

Games Workshop was established during 1975 and originally manufactured wooden boards for chess and backgammon.

After securing the official UK distribution rights to the Dungeons & Dragons role-playing game, the company’s first shop was opened during 1978. 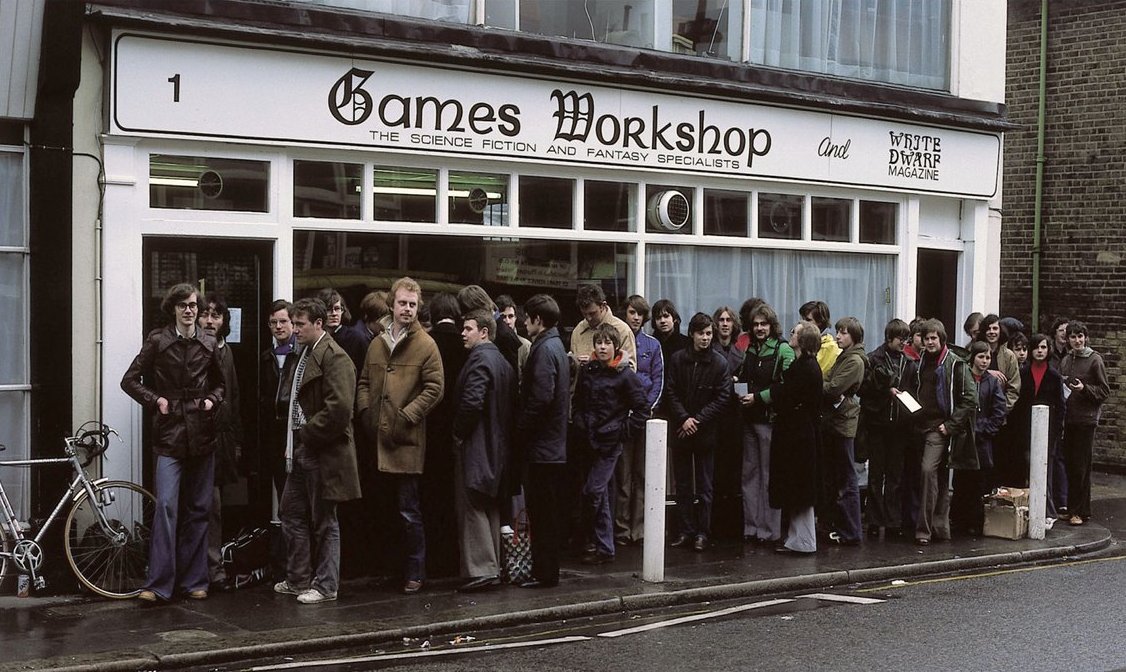 Sales are also made to more than 4,000 independent retailers around the world.

The group’s flagship Warhammer product was created during the 1980s and has evolved over time through eight different rulebooks.

I am quite happy to admit I have never played Warhammer, but I understand the rules are complex, players require large numbers of model soldiers, the game lasts for hours and victory is typically decided by destroying all the other armies. 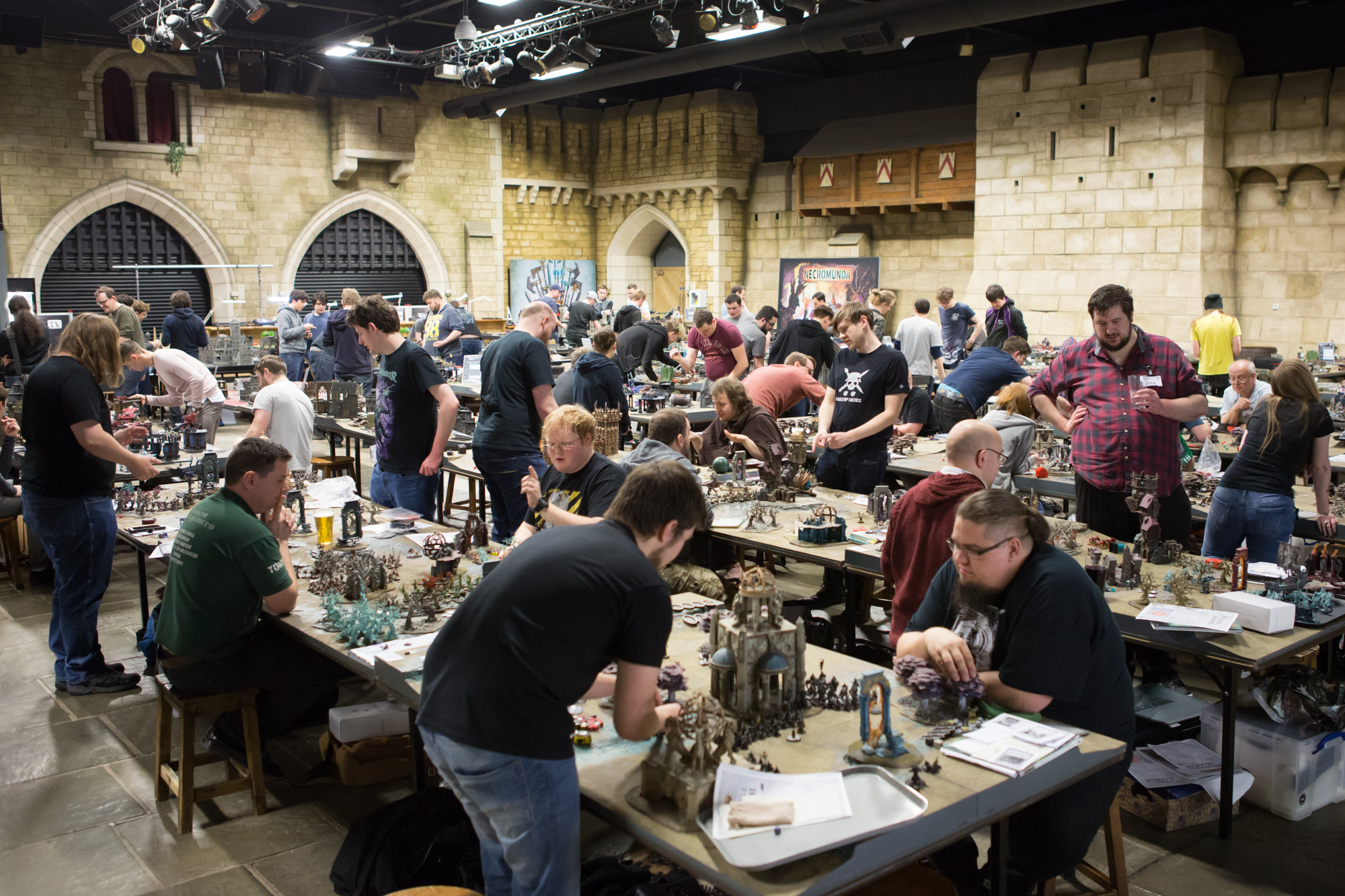 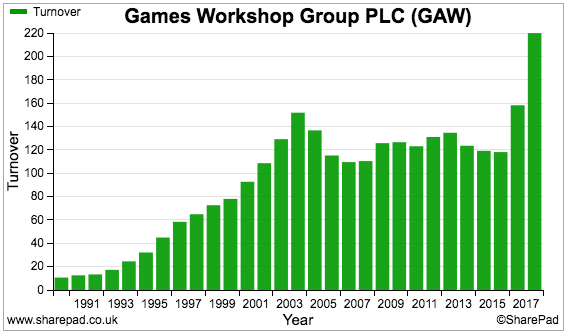 During the first five years as a quoted company, revenue growth was driven by the number of company shops tripling to 230.

An association with the Lord of the Rings films then bolstered sales during 2003 and 2004.

Various mishaps and setbacks followed thereafter, which led to revenue stagnation for ten years. That woeful period goes a long way to explain why the share price effectively went nowhere for so long.

This next chart shows the profit history:

And this chart shows the dividend history: 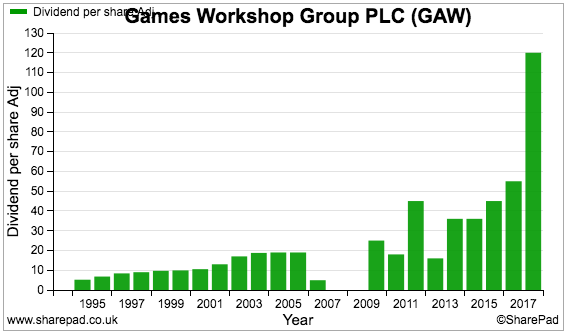 The absence of payouts during 2008 and 2009 was a tad embarrassing — the company had previously suggested its industry “niche” was “naturally protected from macro-economic factors, [with] customers that are dedicated and loyal…[and] relatively price insensitive.”

I visited the HQ and then sold most of my shares

Similar to my share purchase, my visit to Games Workshop’s HQ occurred some time ago — February 2003 in fact.

I met the (then) executive chairman and the (then) finance director, and toured the building.

My write-up of the day has sadly long since disappeared from the internet.

However, I do remember three particular answers that the (then) management gave to my questions. I have paraphrased the replies the best I can.

Q2) Why did the company buy back shares at £6 during 1998 and not buy any shares at all during the sub-£2 lows of 2000 when the company could still afford to pay a dividend?

(Note 1: The (then) finance director described this question as “moronic”)

Q3) If you have such a dominant market position with loyal customers and a true ‘niche’, why aren’t your margins higher?

(Note: The operating margin at the time was 12%)

A3) So you want us to charge our customers more?

I remember leaving the HQ with mixed feelings.

True, I had understood why people played the games and would continue to do so. I also realised the depth of the product range, and learnt how dominant within the industry the business was.

However, I felt the executives were somewhat arrogant and/or complacent with their replies.

I sold most of my shares soon after.

Fast forward three years to 2006 and the (then) executive chairman admitted in that year’s annual report:

“With declining profits, we had a duty to look at our costs…”

A formal cost reduction programme was announced during May 2007. The dividend that year was then reduced by 74%:

“We are using the cash which would have otherwise been applied in paying a final dividend for 2006/7 to finance the cost reduction programme described above.”

My third question from that 2003 visit had already hinted costs were too high.

The earlier dividend chart shows the payout then went missing for two years.

So what went wrong?

Well, the (then) executive chairman wrote within the 2007 annual report:

“This leads me to conclude, as it does every year, that the main source of risk to this business remains management error.”

You can draw you own conclusion as to what (or who) ultimately caused the long period of revenue stagnation and the skipped payouts.

A boardroom change at the start of 2015 now seems an obvious trigger (at least to me) for the share-price surge since 2016.

At this point, the (then) executive chairman became a non-executive and the (then) chief operating officer took full charge as chief executive.

The 2015 annual statement from the new boss signalled he meant business:

“I will review our product range. We believe this is long overdue: it is time for a resetting of the ranges. Not tweaking here and there, but a top-down reassessment.”

Around the same time, the group launched a new game: Warhammer: Age of Sigmar, which came with simplified rules that made playing much easier for new customers.

Following sluggish sales that led to a Christmas 2015 profit warning, the Age of Sigma game suddenly became popular during 2016:

“We finished the year with sales of Warhammer: Age of Sigmar at a higher rate than Warhammer has enjoyed for several years.”

“Launched in November 2016, warhammer-community.com serves as a hub for a wealth of Warhammer content and the gateway to the depth of our IP…

We’ve also updated our home pages at games-workshop.com with more content to help guide new and existing customers through our product ranges, characters and worlds.

We’ve added more videos to Warhammer TV to really showcase the passion and enthusiasm our staff have for their work and our products.”

At the last count, annual page views on warhammer-community.com were running at 70 million. I am amazed customers (and shareholders) had to wait until 2016 for a proper Warhammer website.

Another notable change occurred within recruitment:

“I’ve strengthened my senior team, adding broader skills in IT and merchandising and logistics and added over 20 additional heads in operations, support and marketing.”

I get the impression the designers of the games had dominated Games Workshop’s staff for years.

Now the company employs a wider spread of talent, some of which involves marketing that has no doubt supported the recent sales surge.

I must add that the chief exec’s annual-report biography is encouraging:

The boss has been with the company for 20 years and, aged 48, could well be in charge for some time to come.

I am pleased the directors partake only in the wider staff sharesave scheme and do not grant themselves options or LTIPs.

Incredible revenue growth throughout the group

The rate of Games Workshop’s recent expansion has been incredible.

Interim results published the other week showed first-half revenue and profit of £125m and £41m respectively. Three years ago the figures were £55m and £6m.

My own charts below confirm the expansion has been felt throughout the group.

Since 2016, revenue has grown by at least 70% within each of Games Workshop’s trade, retail and online divisions: 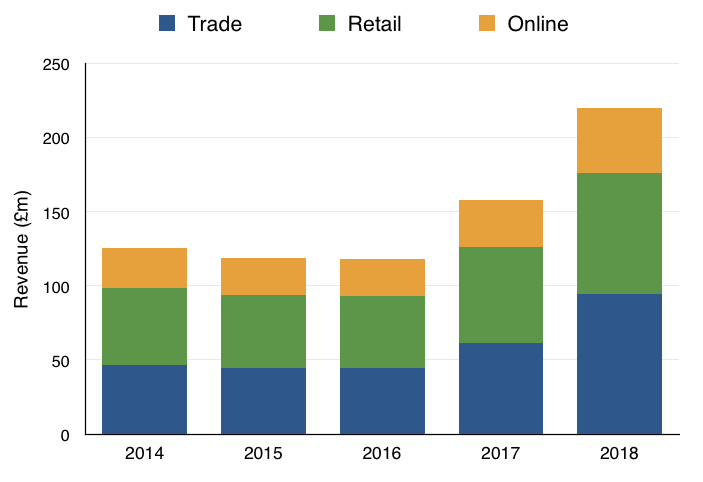 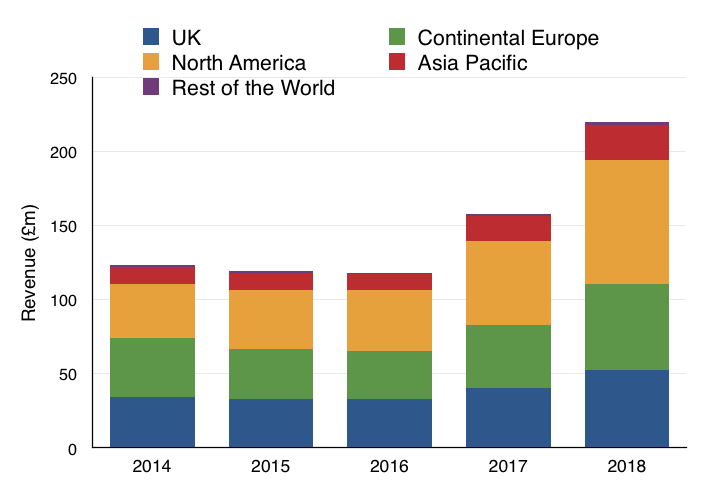 What’s more, sales per company-owned store within the UK and abroad have climbed approximately 60%: 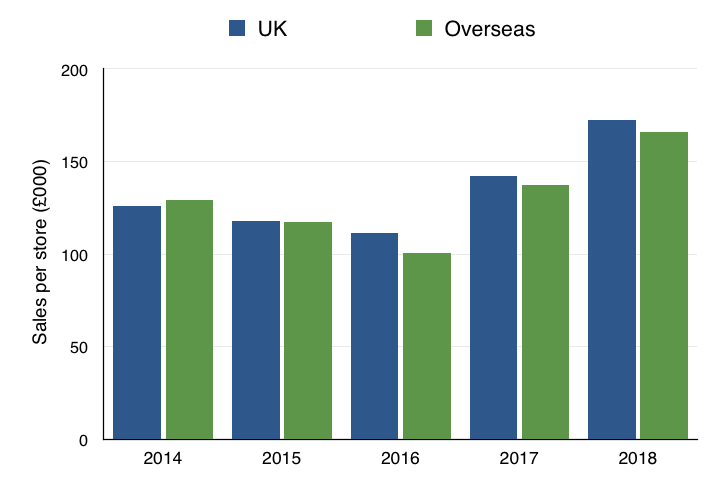 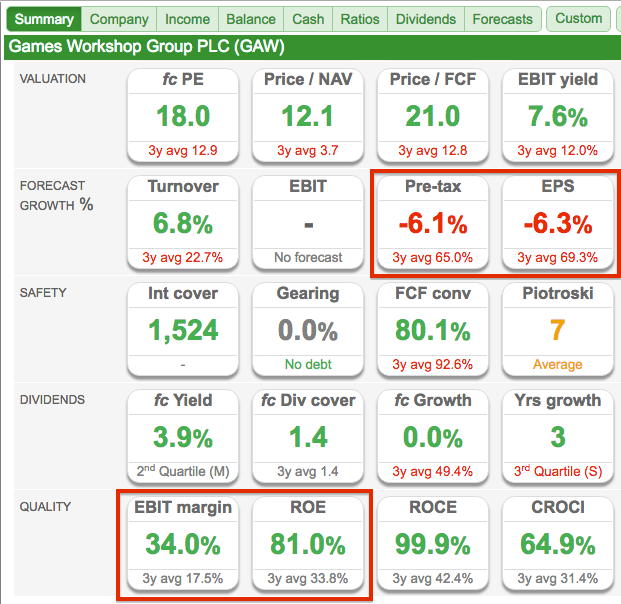 Of particular note are: 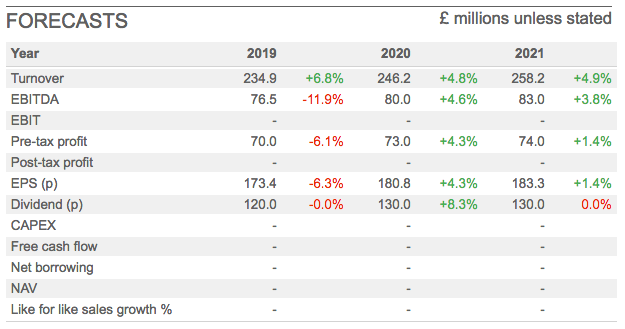 I am not too surprised the amazing growth rate of the last few years is expected to subside to more pedestrian levels.

Furthermore, the current-year forecasts shown on SharePad imply the second half might deliver H2 revenue down 2% and H2 profit down 6%.

Nonetheless, this next SharePad chart shows City brokers being caught out badly by Games Workshop during the last few years: 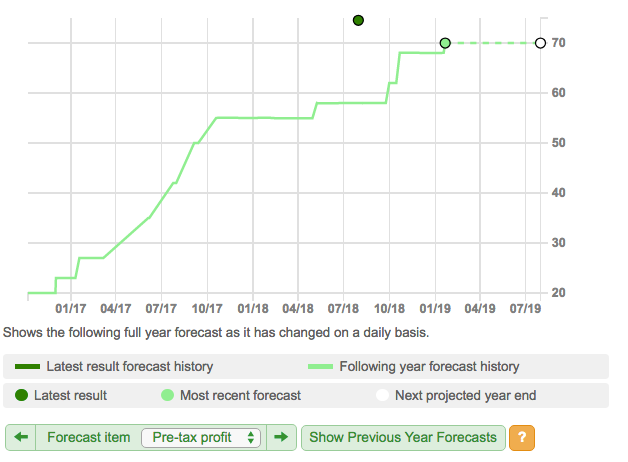 I suppose those brokers may still be under-estimating Games Workshop’s future progress.

Perhaps the brokers are taking their cue from the chief executive when he wrote last year:

“It would be unrealistic, if not daft, of me to promise that we can continue to grow at the rates we have reported over the last two years.”

Still, further growth ought to be delivered. The goal of opening another 25 shops for this current year will (if achieved) increase the retail chain by 5%.

Also encouraging is the £9m being spent building a new manufacturing facility next to the HQ. Such expenditure tends to speak louder than directors just talking about potential growth.

These SharePad charts show nothing untoward

As you might expect, Games Workshop’s outstanding margin and ROE figures have existed for only the past two years: 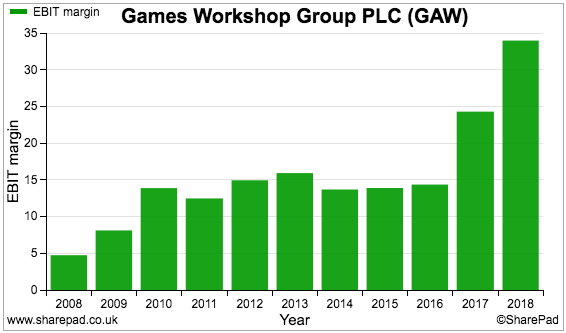 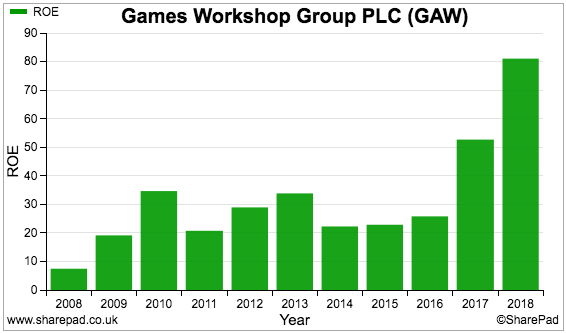 Meanwhile, a few clicks around SharePad do not reveal anything untoward within the accounts. 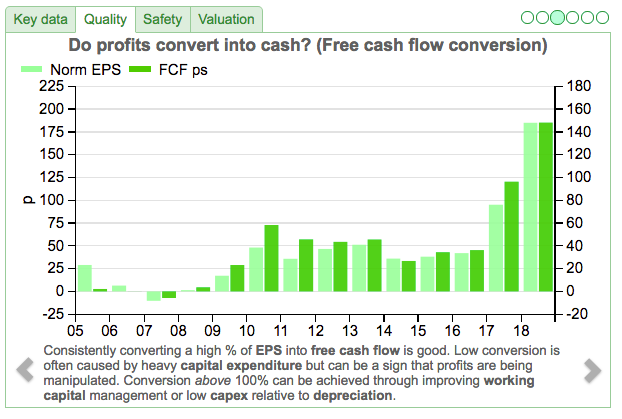 The cash has piled up while borrowings have been paid off: 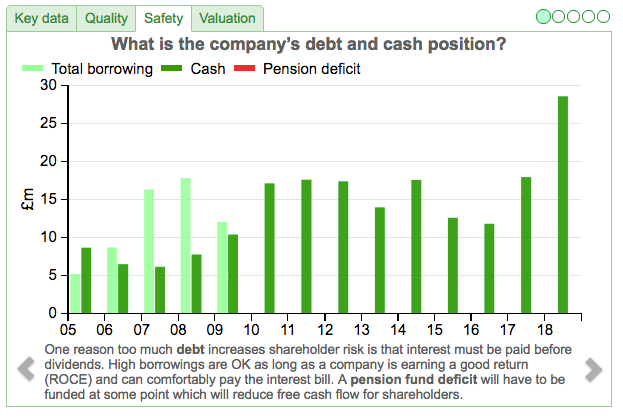 Staff productivity — as measured by turnover per employee — has improved following the aforementioned cost reduction programme and a shift towards one-man shops: 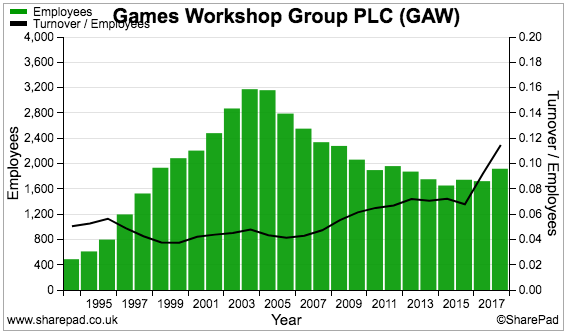 Relatively little has been spent on acquisitions and intangibles: 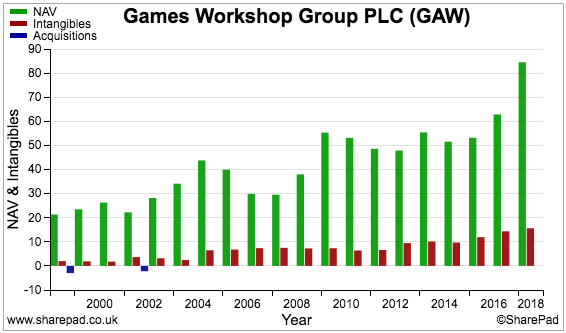 And as Games Workshop is a retailer of sorts… a check of my Debtors & Current liabilities comparison chart does not show any obvious Patisserie Holdings characteristics: 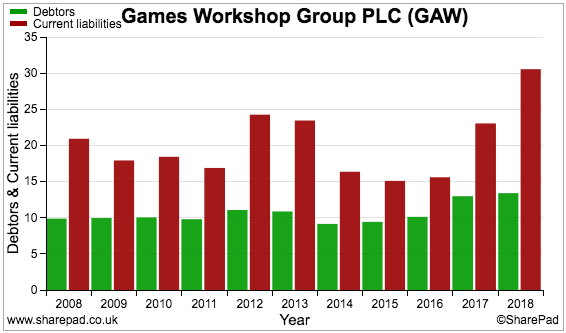 Is Games Workshop a dynamic growth share that is now valued at a reasonable price?

The company has certainly been dynamic during the last couple of years.

As a former shareholder who endured many of the company’s earlier setbacks, I have been astonished by the rapid sales and profit ascent since 2016.

And dare I say it…

…assuming Games Workshop can maintain a respectable growth rate and sustain its super margins and ROE, then perhaps the forecast P/E of 18 shown within the Summary tab is not that extravagant after all.

I can certainly understand why anybody enthused with Age of Sigmar could be equally enthused by the company’s shares, recent progress and the opportunities that may lie ahead.

I suppose everything now depends on whether Games Workshop has:

1) created a permanent performance step-change from which to advance further, or;

2) just enjoyed a lot of luck with a new game and will eventually revert to its inconsistent ways.

I am hopeful of option 1) — despite my nine years of mixed experiences as an ex-shareholder.

Let me finish by mentioning the quirky dividend.

Introduced back in 2010, the group’s payout policy is to simply distribute “truly surplus” cash as and when the opportunity arises.

As such, dividends are declared in a haphazard fashion.

During 2018 for example, four payouts were announced — all of which were revealed within ad-hoc trading statements and not within the company’s results.

Disclosure: Maynard does not own shares in Games Workshop.