Screening For My Next Long-Term Winner: Medica 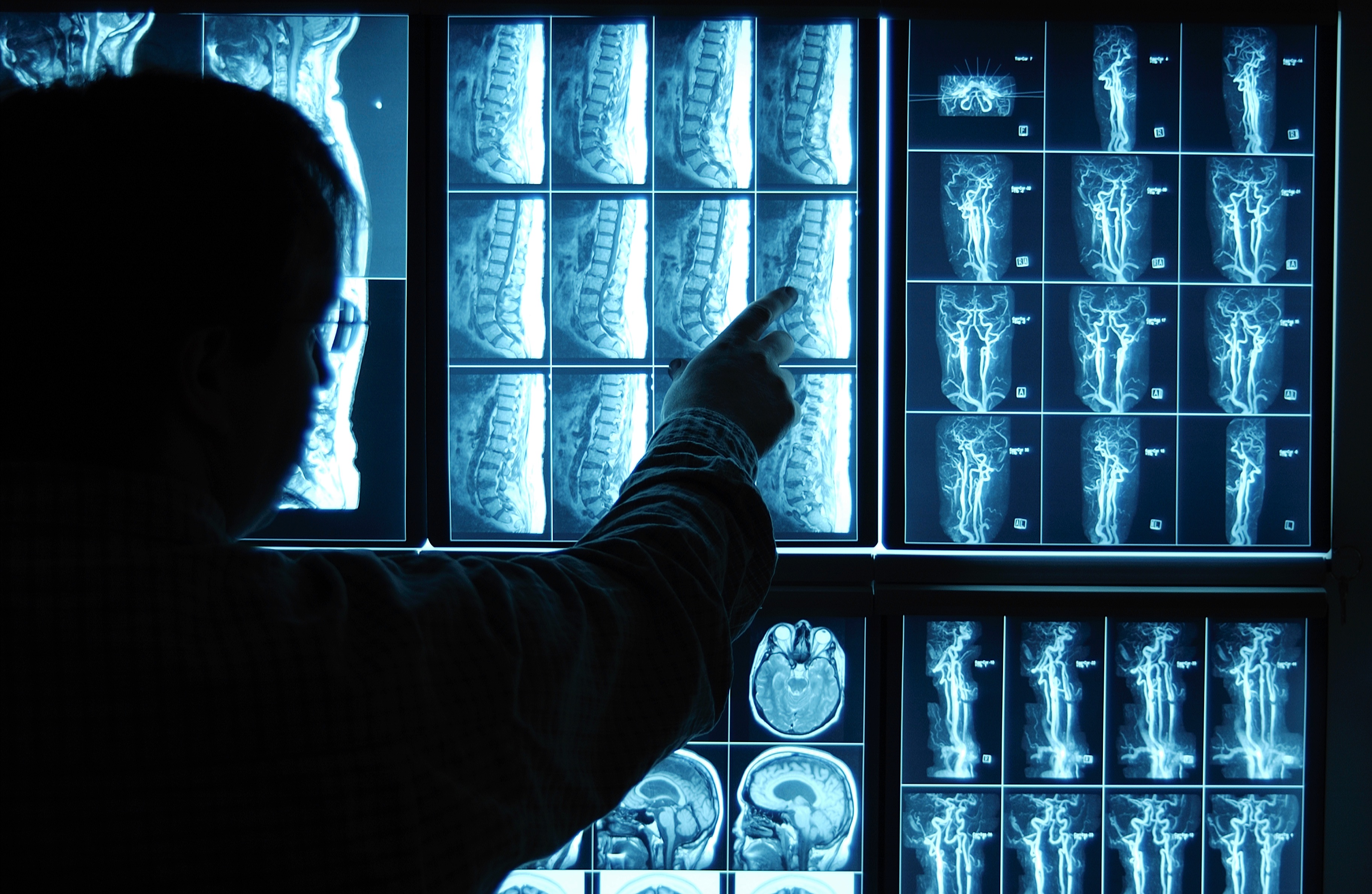 Dynamic growth shares are among the market’s most exciting investments.

Find a business that has expanded rapidly and offers the prospect of further earnings growth — but also has an overlooked share price — and you could be on to a winner.

Let’s use SharePad to pinpoint a possible example.

These days many established growth companies are valued quite highly.

As such, screening for companies with attractive — but shorter — records of expansion could be more likely to unearth a potential bargain.

However, growth always has to be accompanied by ‘quality’. In particular, the very best companies grow ‘organically’ — that is, without relying on acquisitions or mergers to expand.

In addition, decent accounts may lessen the chance of profit growth suddenly slowing or something else going wrong.

Putting all that together, I applied the following filter criteria within SharePad to discover a potential opportunity:

2) A minimum 15% for both return on equity and operating margin;

3) Net borrowing of no more than zero (i.e. a net cash position), and;

4) A five-year acquisition spend of zero. 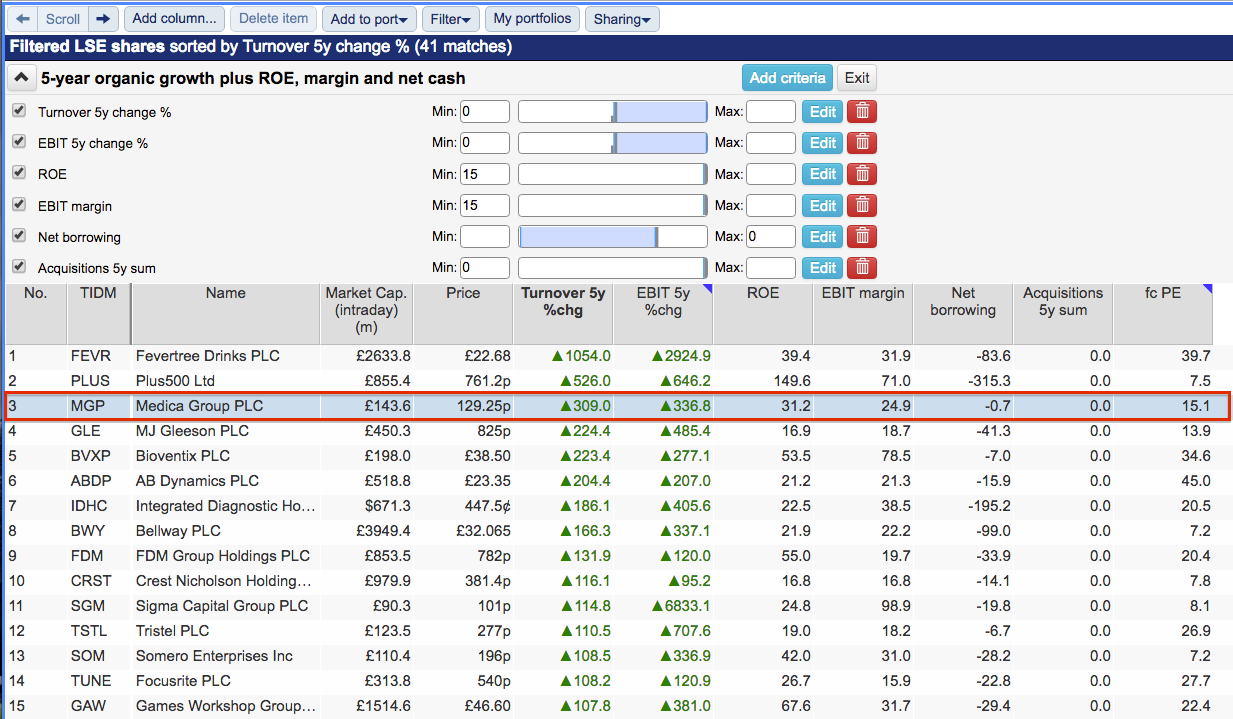 (You can run this screen for yourself by selecting the “Maynard Paton 24/09/19: Medica” filter within SharePad’s fabulous Filter Library. My instructions show you how.)

SharePad returned 41 shares — including familiar names such as Fevertree Drinks, Plus500, Somero Enterprises and Games Workshop.

I selected Medica Group — an AIM-traded supplier of radiology reports to hospitals — because its £144m market cap was small and the forecast P/E of 15 appeared modest given the 300%-plus five-year expansion. 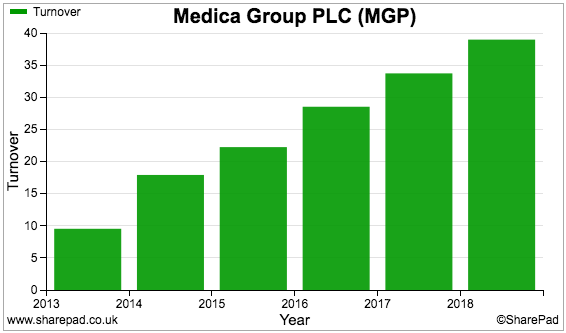 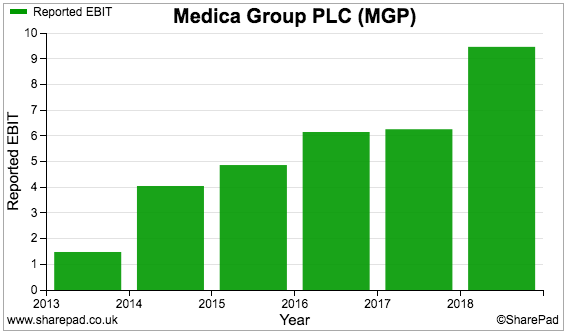 Ah, SharePad shows data only for the last six years. Visiting the Company tab confirms Medica has been quoted for just two years: 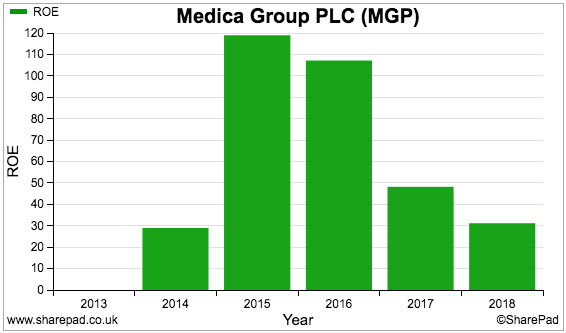 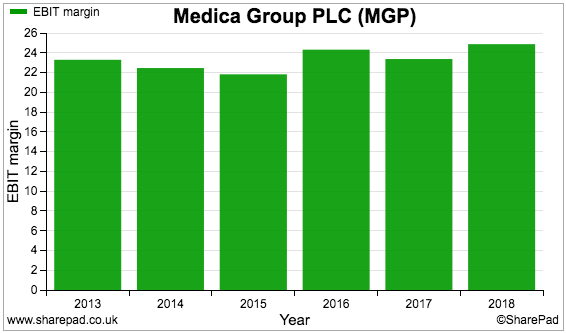 Medica’s ROE has been up and down due in part to the proceeds raised during the group’s flotation. I am impressed the operating margin has consistently exceeded 20%.

The history of Medica

Medica was established during 2004 and has since become the largest independent supplier of radiology reports to UK hospitals.

Radiology is the medical practise of using patient images — such as those produced by computerised topography (CT) scans and magnetic resonance imaging (MRI) machines — to diagnose medical conditions. 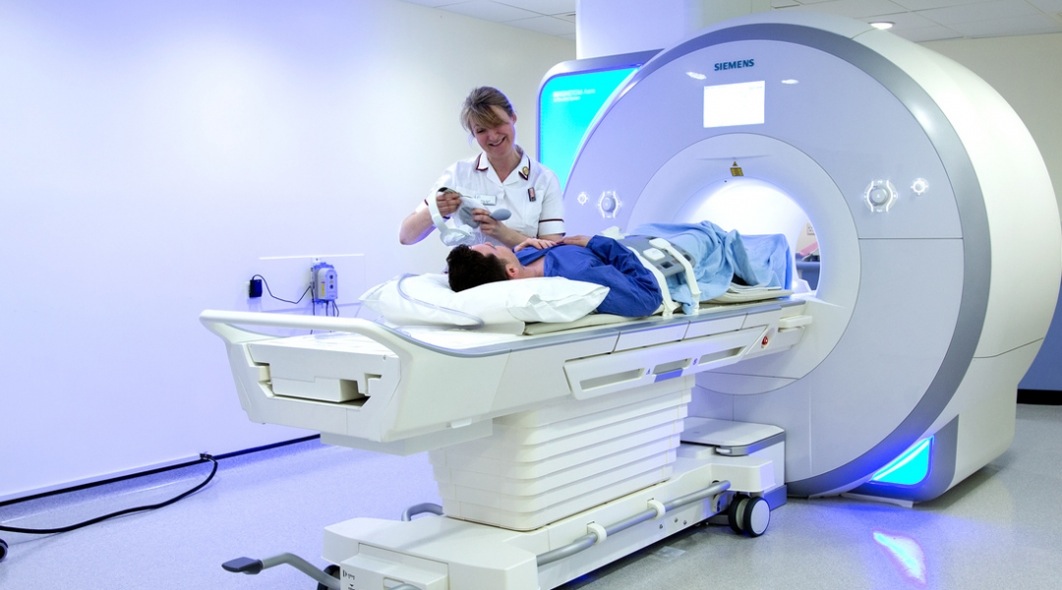 Medica’s software links a hospital’s radiology system to the company’s consultant radiologists, who can then provide a remote diagnosis report for the hospital.

The service operates 24 hours a day, 365 days a year, and allows hospitals to manage their radiology workloads more effectively during busy times.

Hospitals can instantly access Medica’s pool of consultants with differing specialities — and receive a diagnosis faster than contacting an ‘on call’ radiologist who has to travel in.

The group’s software apparently highlights potential areas of concern to the radiologist, and also gives access to patient history records — which improves the quality of the diagnosis and (as I understand) differentiates the service from alternative providers.

At the last count Medica had 414 radiologists on its books and served more than 100 UK hospitals. The group claims to have a 50% share of this ‘tele-radiology’ market. 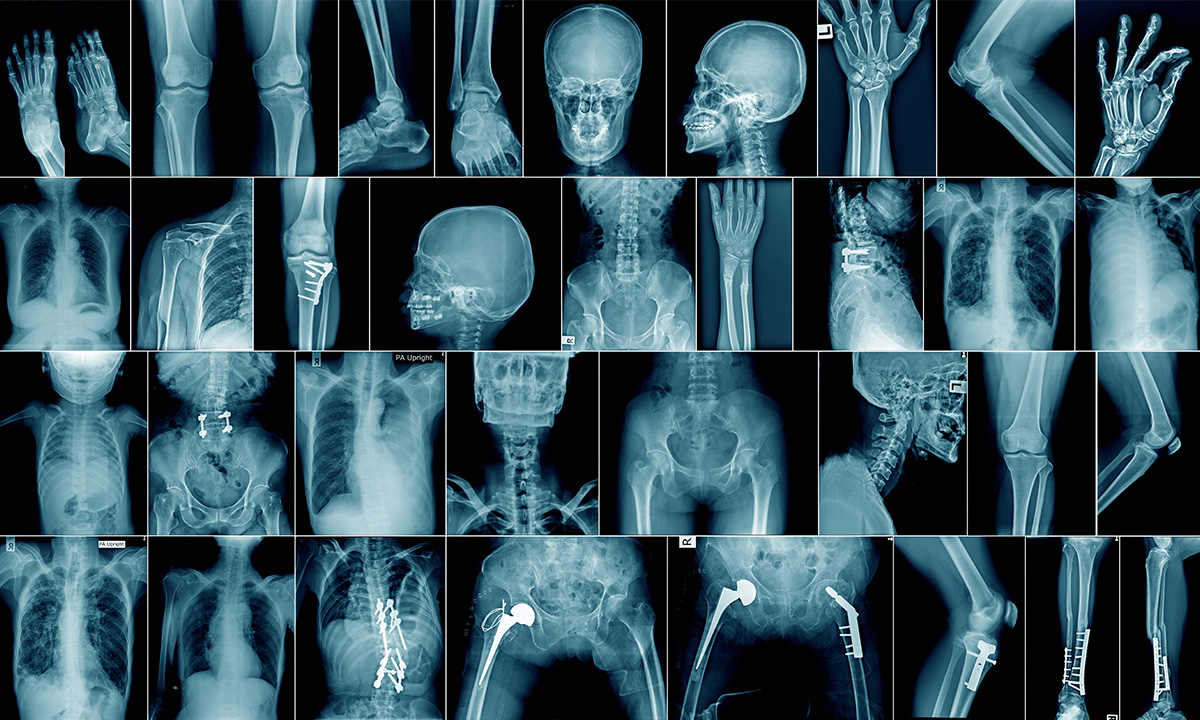 According to Medica, its 300%-plus five-year expansion has been underpinned by:

Medica’s flotation document reveals the business handled more than 1.3 million examinations during 2016, implying each of the then 248 consultants evaluated a remarkable 15 or so scans every day.

The flotation document shows demand for the Nighthawk service and routine CT and MRI scans quadrupling between 2013 and 2016: 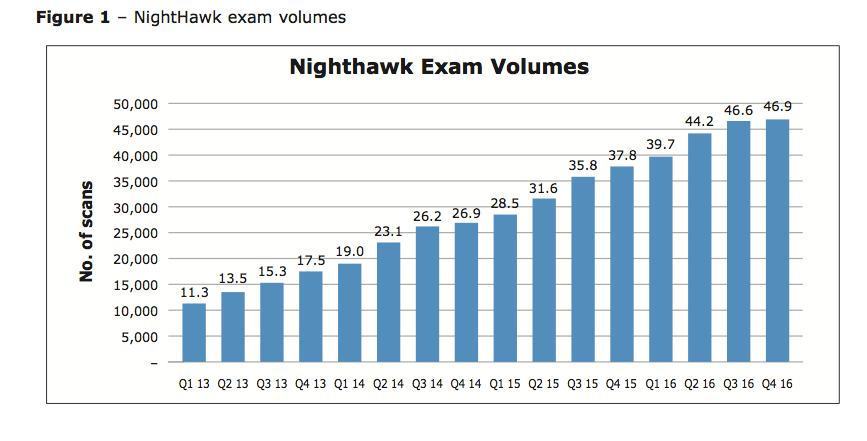 While Medica’s growth has been superb, the obvious downside is the almost entire dependence on the NHS. The Risks section within the flotation document admits:

“There is a risk that NHS or UK Government policy or operating model changes or changes to NHS Trust budgets could result in individual NHS Trusts reducing the volume of services purchased from commercial organisations such as the Group for example, by reducing outsourcing expenditure in general or by moving to alternative service or commissioning models.”

As we will see in a minute, Medica has not been immune to NHS budget pressures.

Bear in mind, too, that Medica was previously majority-owned by a private-equity house that banked approximately £100m at the flotation. The same investor now retains a 6%/£9m holding: 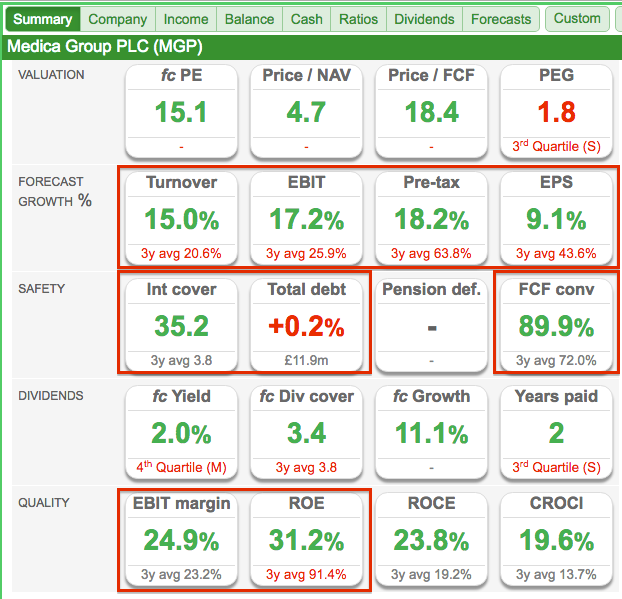 Let’s start with the debt and cash conversion.

The chart below shows Medica’s debt declining significantly and a £1m net cash position emerging by the end of 2018: 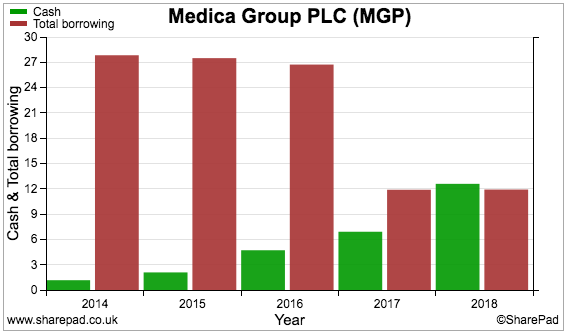 SharePad reveals Medica raised £15m through the flotation, and the proceeds were all used to reduce the group’s debt (to £12m):

Debt interest payments of £0.3m do not look problematic versus a £10m operating profit:

I calculate the loans attract interest of just 2.5%, which suggests the bank sees Medica as low risk.

The flotation proceeds explain the ups and downs in that earlier ROE chart. Medica’s shareholder equity increased substantially when the company went public, and therefore the returns on that equity then decreased significantly.

Using return on capital employed — which essentially adjusts the ROE calculation for debt — gives an improving performance to a worthwhile 22%: 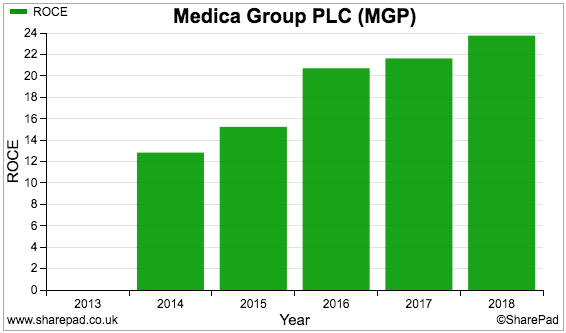 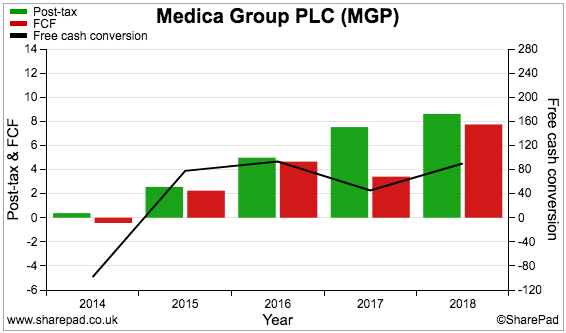 Three of the last four years have witnessed 80% or more of earnings convert into free cash — a very credible performance.

We can see the lower conversion during 2017 was due to a (seemingly) one-off increase to working capital (the red bars): 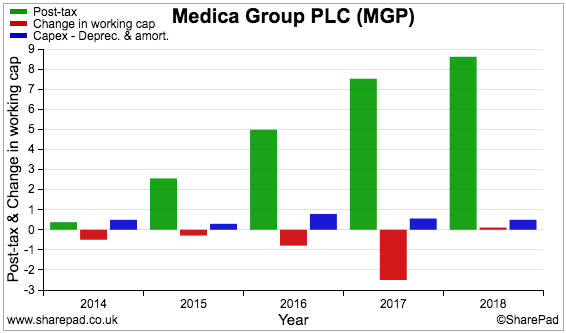 The chart below confirms Medica has spent nothing on acquisitions (or buybacks) during the last five years: 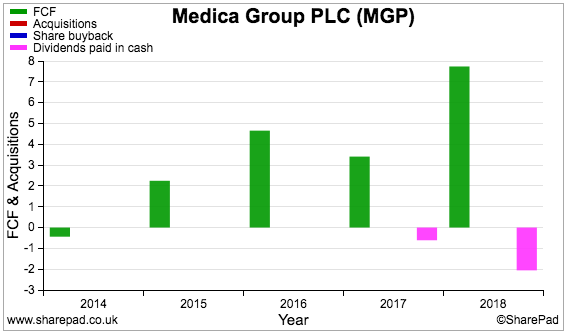 Encouraging double-digit revenue and profit advances are expected during the next few years:

Interim results published earlier this month revealed turnover up 18% to £22.0m and operating profit up 7% to £5.3m.

Going on SharePad’s 2019 forecasts, second-half sales and profit are expected to advance 12% and 11% respectively.

“For the full year 2019, the Board anticipates revenues will be slightly ahead of its expectations with profit remaining in-line with its expectations as the Company continues to invest in optimising the business for future growth.”

“Demand for Medica’s services, particularly Cross Sectional and NightHawk continues to be strong and growing ahead of the market growth in overall scan volumes.”

However, the results were not perfect.

Margins could come under pressure from NHS “pricing reviews”:

“As previously guided, it is expected that the gross profit margin will continue to edge down primarily due to pricing reviews when contracts are renewed and, in some cases, where contracts move to new framework agreements.”

The main Nighthawk service in particular could be subject to pricing pressure:

(Note: a grapevine source tells me that Medica has admitted NHS contract renewal could cut margins by three or four percentage points during the next few years).

“The level of trade debtors increased from NHS Trusts which is expected to return closer to normal levels as the year progresses.” 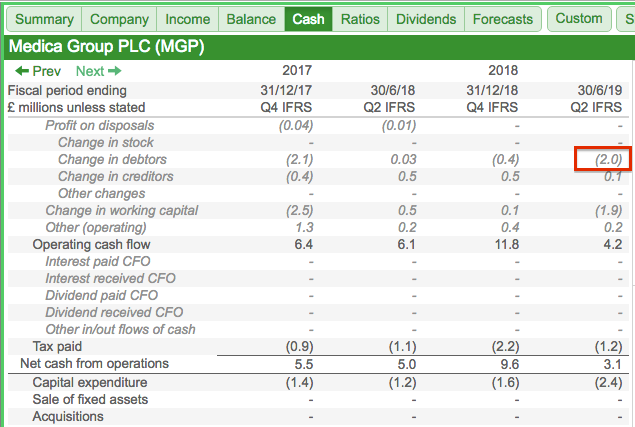 Account for the greater capital expenditure as well, and free cash flow during the six months dropped to just £0.7m.

The lack of free cash — alongside paying a £1.7m dividend — meant the aforementioned net cash position has since transformed into a small net debt position.

I must admit, the combination of NHS Trusts negotiating lower fees and paying their bills later is not very promising.

A recent boardroom change is another drawback. A new chief executive was appointed in September after the previous chief exec — who oversaw the aforementioned 300%-plus growth — relinquished the role he had held since 2011.

Medica is the first company I have encountered that treats “costs incurred in respect of Board succession” as exceptional:

I note £245k of these costs were charged against 2018 profits despite the search for the new boss being announced during March 2019.

Medica boasts many attractions. Organic growth has been very impressive, margins are high, the balance sheet is free of major liabilities while the valuation is not in the stratosphere.

Best of all — at least in theory — is that demand for ‘tele-radiology’ services should not be directly affected by economic ups and downs. People will always fall ill and always require medical scans.

Opportunities exist overseas, too. For example, radiologists have been recruited in Australia who could assist with UK night shifts as well as serve their local market.

Strong customer loyalty is another plus. Medica’s latest presentation confirmed 82% of revenue is paid by hospitals that have used the service for at least five years:

You could of course argue that Medica has struggled to win new customers — given only 18% of revenue comes from hospitals that signed up less than five years ago.

Medica concedes the “majority of growth” has come from its long-time clients, and I do wonder whether the group is too dependent on these hospitals for further progress.

Indeed, setting up an Australian venture may actually be evidence the UK marketplace has now seen its best days.

I suppose the revised NHS pricing — perhaps prompted by that impressive 20%-plus operating margin! — alongside slower payments might also mean trading becomes less straightforward from here.

The concerns are perhaps reflected by the share price. The shares surged to 180p on their first day of trading, but have since drifted down towards their 135p flotation price: 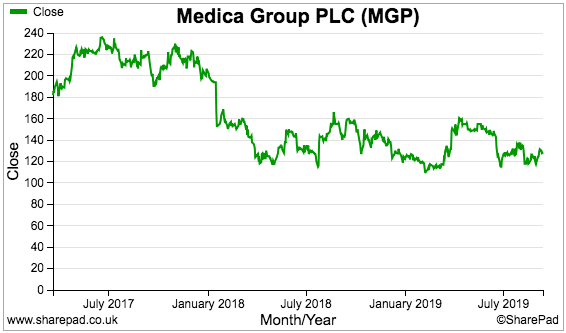 The P/E rating has dropped to more reasonable levels, too: 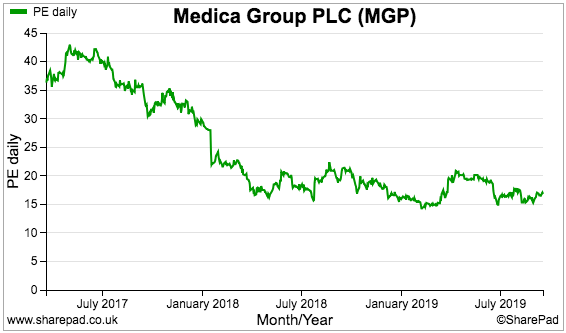 The question now is whether Medica’s significant expansion and quality financials can be extended with the NHS belt-tightening and a new boss in charge.

I am not sure either way, but your diagnosis may be more conclusive.

Disclosure: Maynard does not own shares in Medica.

[SharePad] Screening For My Next Long-Term Winner: Frontier Developments #FDEV