Screening For My Next Long-Term Winner: Somero Enterprises 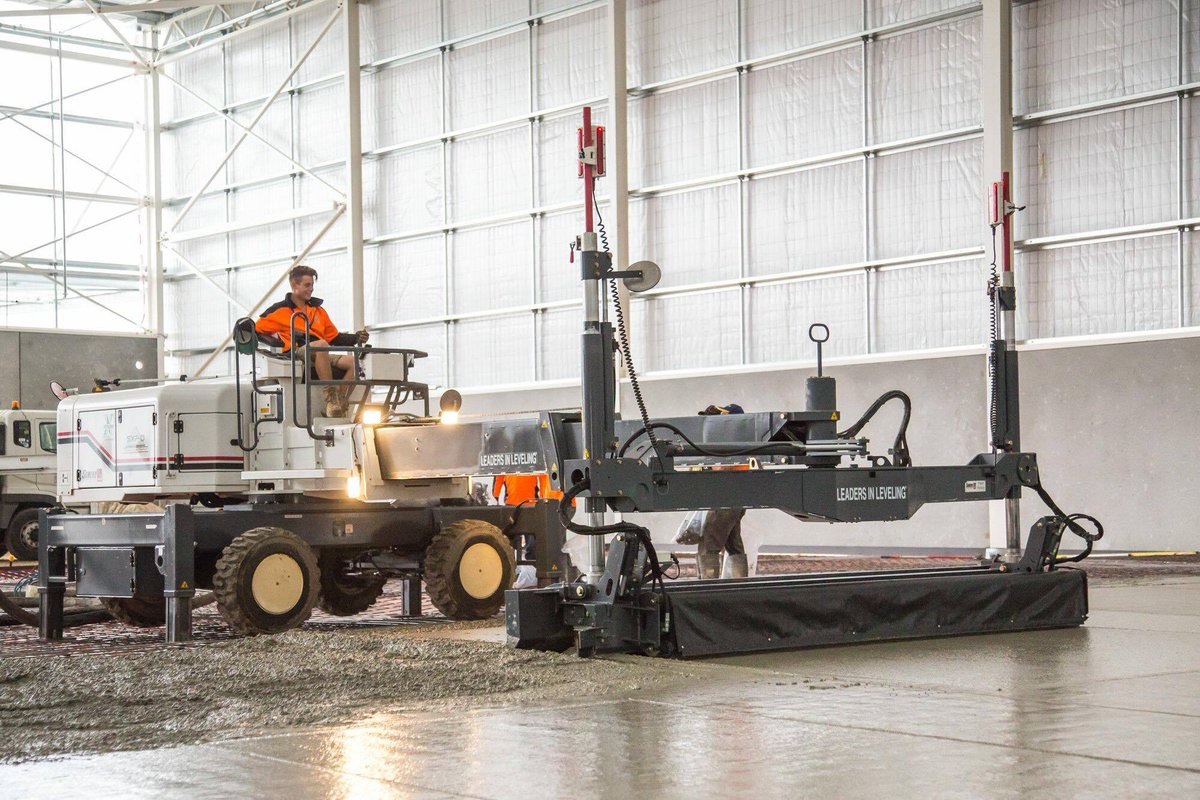 How did your portfolio fare during 2018?

If you managed to side-step the market falls, very well done.

For the rest of us — including me — I guess we can only cross our fingers and hope the FTSE performs a lot better during 2019!

Still, with share prices in the doldrums and many investors fed up…

…now seems as good a time as any to fire-up SharePad and hunt for some bargains buys.

I am going back to basics with this SharePad trawl. I simply want to identify a quality company trading at a modest valuation that I can hold for the long term.

Given recent market conditions, I am hopeful SharePad will unearth a few likely contenders!

For this screen I demanded:

(The above filter criteria has been added into the library of filters within SharePad. Simply go to: Filter -> Apply filter -> Library -> “Maynard Paton 02/01/19: Somero Enterprises”)

I used operating margin and net borrowing as proxies for ‘quality’. I thought a high margin could suggest a profitable niche, while a lack of debt could mean wonderful cash flow. 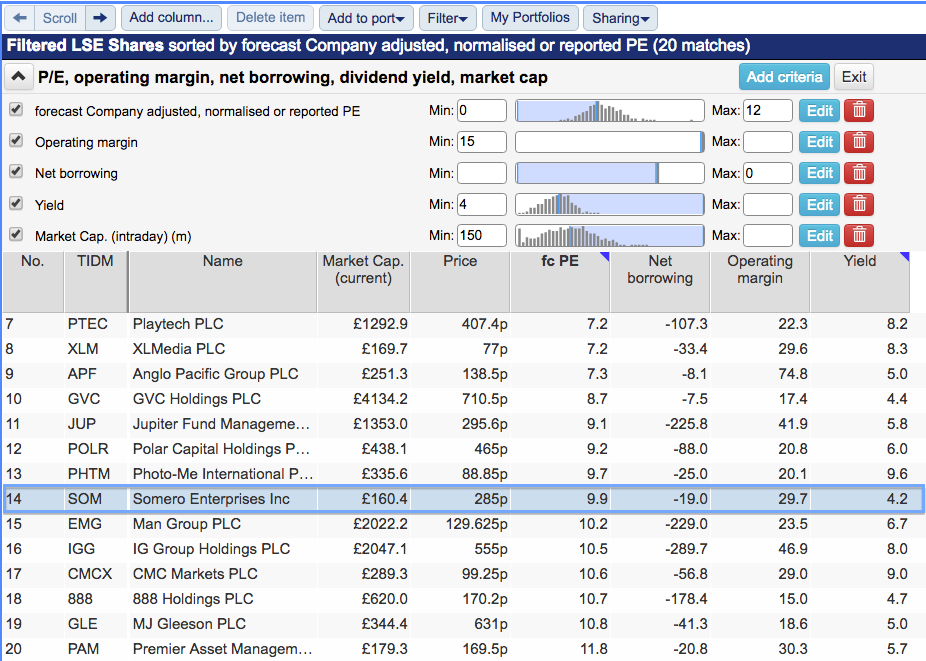 The list was dominated by online gambling companies, fund managers and spread-bet firms.

However, the name that stood out for me was Somero Enterprises Inc (LSE: SOM). I was vaguely aware of this business having some prominence within its particular field — the glamorous world of concrete floors.

Plus, the Inc at the end of the name signified the business was American (although the shares are quoted on AIM).

With the value of the pound seemingly deteriorating every day, perhaps a US company that enjoys dollar-denominated earnings may provide a useful foreign-exchange bonus. 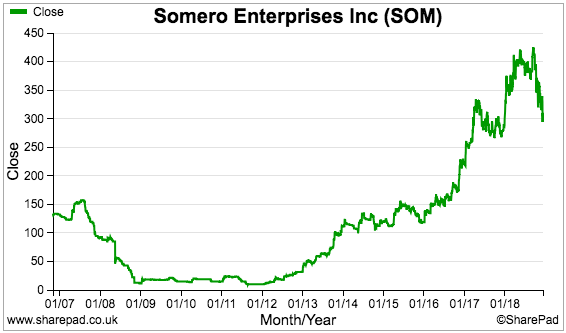 The price has actually dropped back to a level first achieved during March 2017.

Which is all well and good… although why the shares collapsed to 20p in the first place needs to be determined. 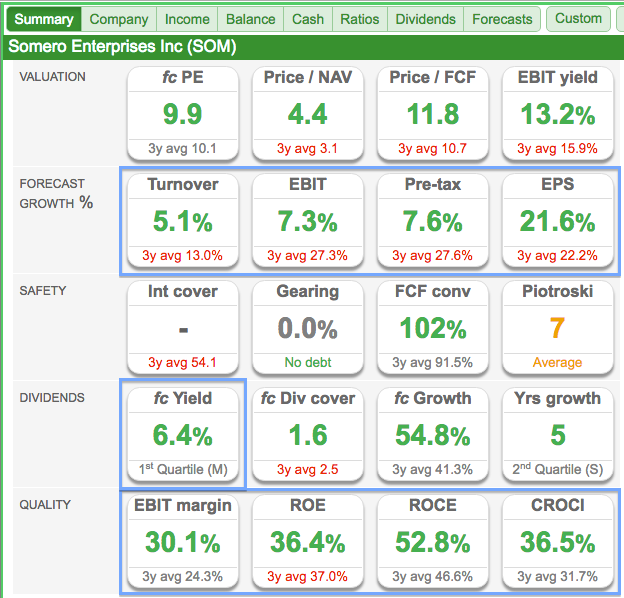 So, a good spread of green numbers.

The second row shows the company is expected to report near-term growth.

Meanwhile, the fourth row shows a forecast yield of 6%-plus.

And the bottom row shows very impressive margin and return on equity (and similar) ratios.

Almost two-thirds of revenue comes from the United States. So, this business is indeed a dollar-earner.

The laser-guided machines allow forklifts to travel at 6mph

Somero was established during 1986 when the company — according to its flotation document — “revolutionised the concrete placement industry by bringing automation to the screeding process”.

‘Screeding’ is the levelling of wet concrete.

An individual builder might use a handheld screed ‘rake’ on a domestic job, but Somero makes industrial screeding machines for builders and contractors working on large construction projects.

Somero’s 1986 breakthrough was the introduction of laser-guided equipment, which helped ensure concrete floors could be laid much easier and with far more precision.

The following pictures show the type of machinery Somero designs, manufacturers and sells.

The first is a ‘boomed screed’:

And below is a ‘ride-on screed’:

The machines are often used to lay floors for warehouses, where a perfectly flat surface can be vital.

Uneven floors can also damage a forklift’s tyres, shock absorbers and suspension, which leads to additional repair bills for the operator. 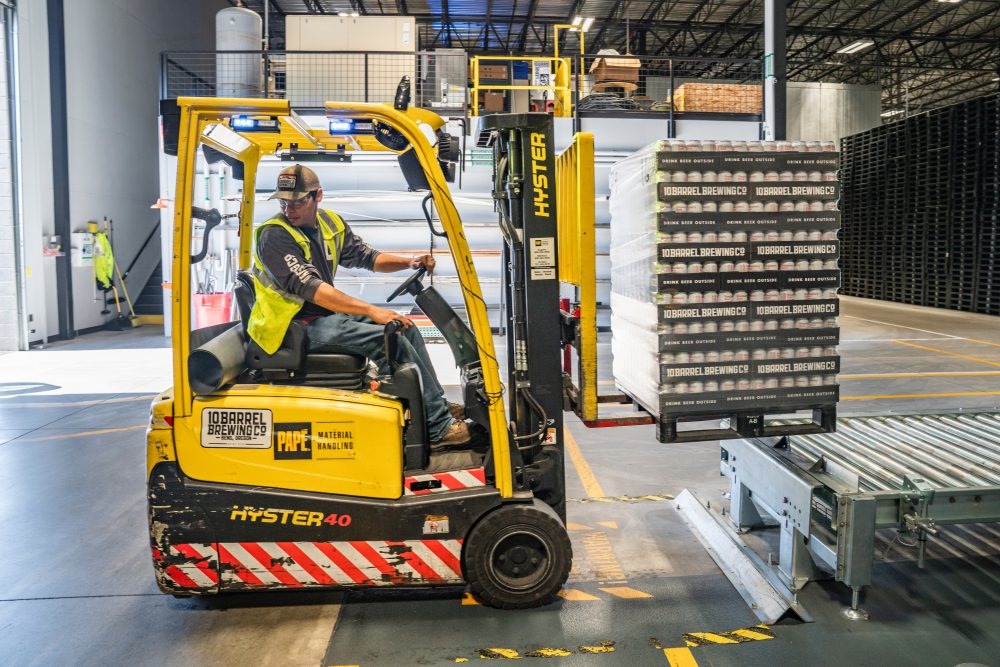 Anyway, according to Somero’s 2017 annual report:

I must say, “minimal direct competition” and “unsurpassed quality” do sound very encouraging.

I guess nobody wants their screeding machine to break down part-way through levelling a large, wet concrete floor.

Revenue and profit tracked the banking crash and recovery

Somero floated on AIM during 2006 and the following SharePad charts display the group’s revenue and profit history: 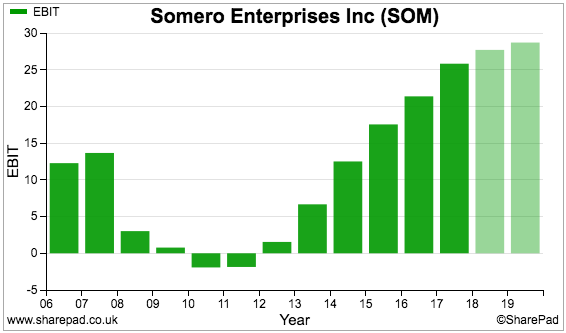 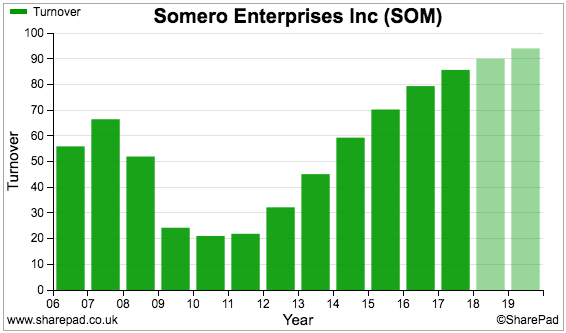 Something obviously went badly wrong during 2009, and then went very well from 2013.

Given Somero’s past fortunes look to have tracked the banking crash and recovery, the business appears somewhat sensitive to the economy.

Somero’s equipment is not cheap to buy.

Each year, the company helpfully tells investors how many machines have been sold and the total revenue they have raised.

I have produced the following charts myself. 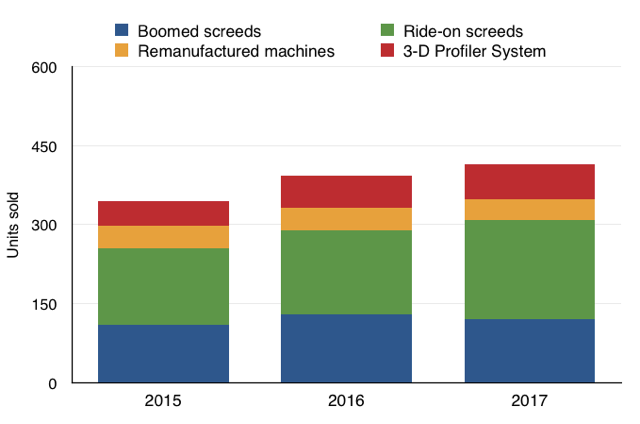 My second chart shows the revenue produced from the different machines: 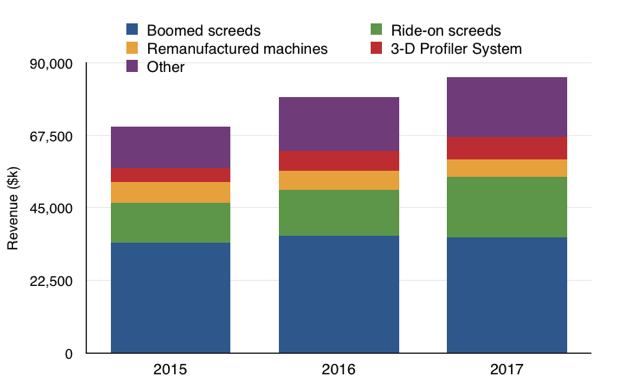 Between 2015 and 2017, boomed screeds consistently generated revenue of approximately $36m, while sales from ride-on screeds advanced from $13m to $19m.

You may have already realised that boomed screeds generate a lot more revenue per unit than ride-on screeds.

I calculate Somero collects about $300k from each boomed screed versus $100k or so from each ride-on machine. 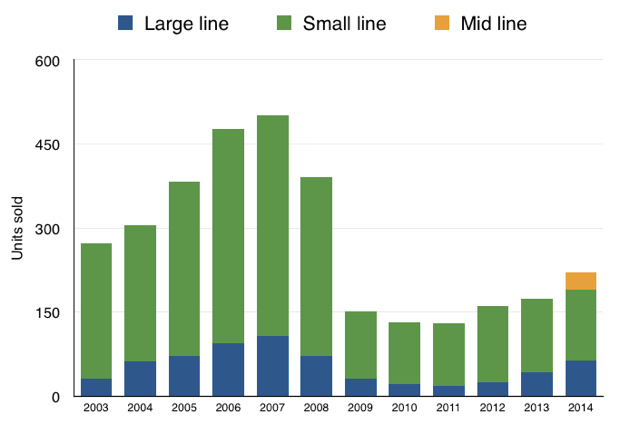 Somero changed the way machine sales were disclosed during 2015, so an exact like-for-like comparison is sadly not available.

However, ‘large line’ (in blue) and ‘small line’ in green are roughly the same as boomed screed and ride-on screed respectively.

Anyway, we can easily see unit sales of both large and small-line machines collapsed during 2009.

During the same time, total turnover from the sale of large and small machines crashed from almost $50m to less than $12m: 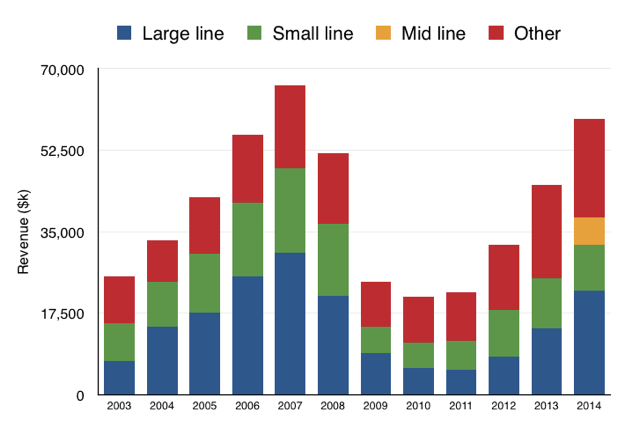 Management remarks from the trading updates issued during 2008 are worth considering:

May 2008: “Demand for our large-line product in particular has slowed dramatically as the widespread sentiment of a macroeconomic slowdown has impacted clients’ capital expenditure plans.”

November 2008: “The combination of customers finding it difficult to obtain finance for purchases of Somero’s large and small-line equipment, together with the very rapid recent appreciation of the US dollar in the last month, has led to significant lengthening of sales cycles, both in the United States and in other markets.”

So, not only can wider economic conditions reduce the number of large concrete floors being laid…

…reduced bank lending and/or adverse currency movements can prevent customers from purchasing the (expensive) equipment in the first place.

Further special dividends could be forthcoming

Let’s now scoot around SharePad to check Somero’s other characteristics.

I see sales per employee have been rising towards a useful $500k: 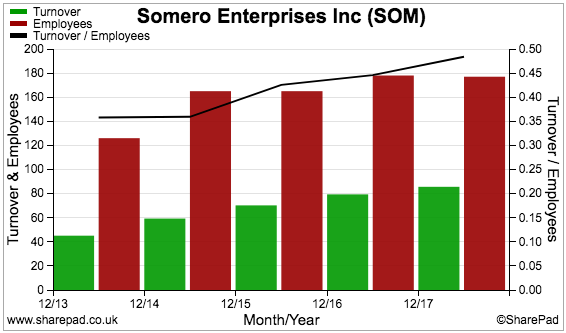 Meanwhile, large debts have been paid off and the cash pile has ballooned: 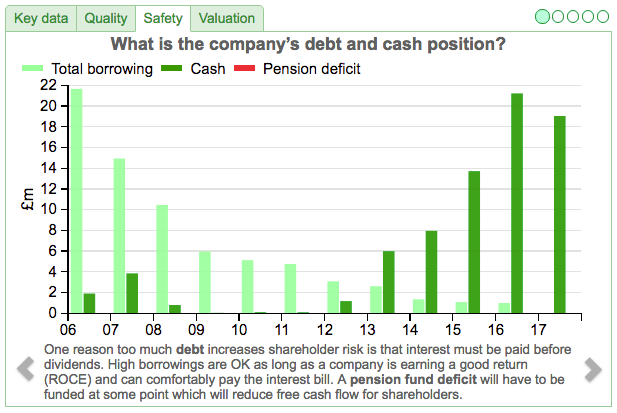 And special dividends (in blue) have been declared: 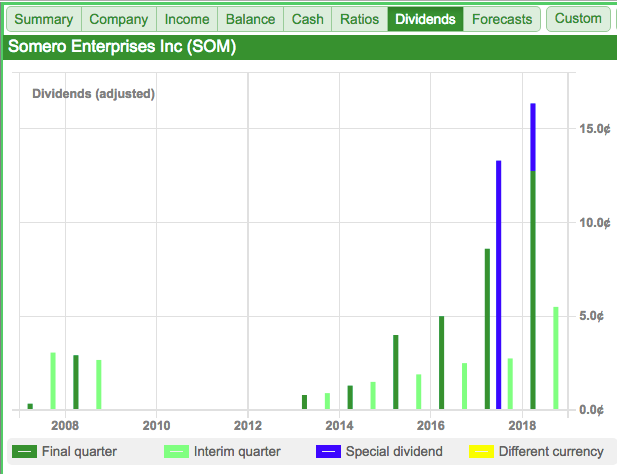 Further special payouts could be forthcoming, too. Somero’s 2017 results said:

“Going forward, the Board will look to maintain a target net cash balance of at least US$ 15.0m, measured at each year end and intends to distribute 50% of the excess of net cash over the year-end target in the form of a supplemental dividend.”

A quick study of cash flow

Once again, SharePad’s ace download facility comes to my assistance. I simply select ‘Export data’ from the Sharing tab… 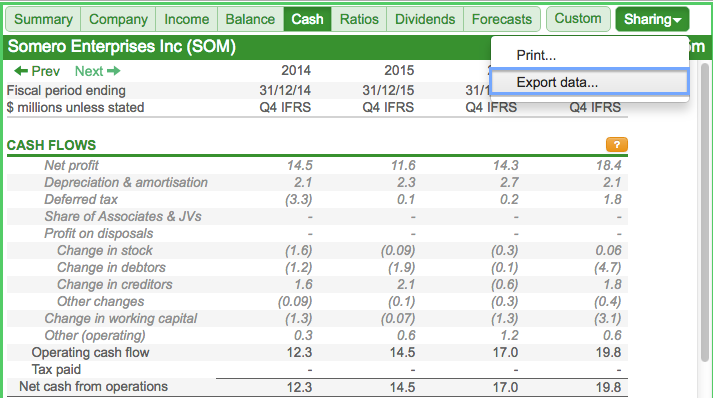 …and quickly make a few calculations to judge how Somero has converted its reported profit into cash. 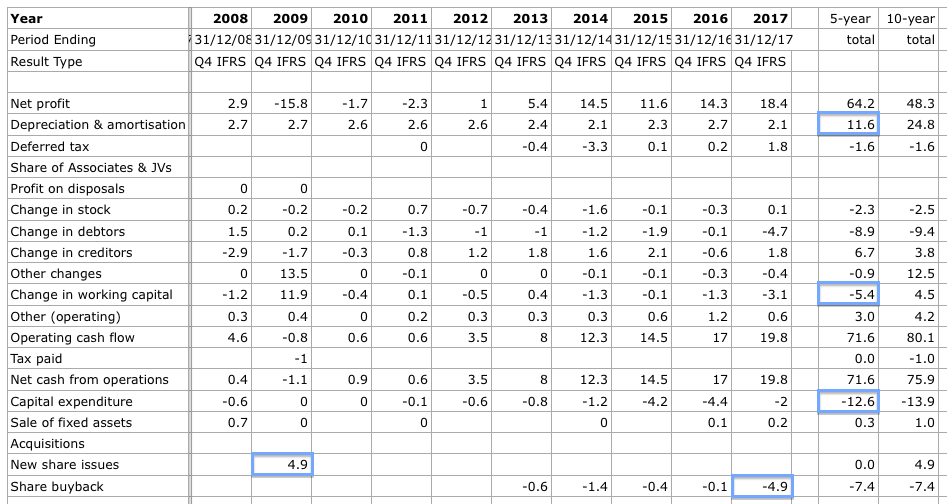 Everything looks in order to me.

True, Somero has absorbed a net $5m into working capital during the last five years. However, that sum is relatively small given net profit has grown from $5m to $18m during the same time.

Elsewhere, aggregate cash capital expenditure ($13m) has broadly matched the depreciation and amortisation charged to reported earnings ($12m) since 2013. (I note capex was turned off completely during the 2009/2010 downturn.)

My spreadsheet also shows nearly $5m raised from new shares during 2009 — presumably to shore up the then debt-heavy balance sheet.

Somero’s buybacks are interesting because they are not really proper buybacks.

I only know this because I (fortunately) double-checked the figures using SharePad.

This next chart compares the buyback amount (in green) to the share count (in red): 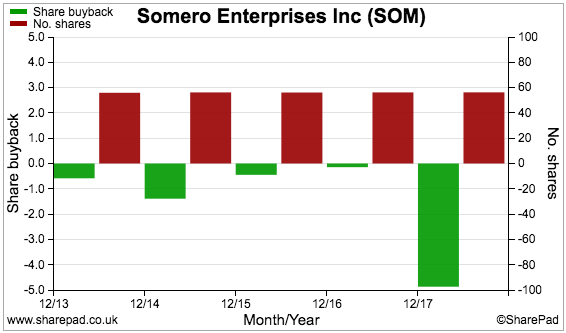 The share count has remained unchanged despite a not insignificant sum spent buying shares.

Further reading confirms Somero used company money to buy back stock options that had been exercised — and that would have otherwise turned into ordinary shares and increased the share count.

Such usage of company cash is perfectly legitimate… but the sums involved are sizeable.

No prizes for guessing where a good chunk of the $13m has gone:

At least the number of outstanding stock options and RSUs now stands at less than 1% of the share count.

Mind you, the difference between the $13m spent on ‘buybacks’ and the associated stock-based compensation charge is significant.

Versus the aforementioned near-$5m ‘buyback’, the associated earnings charge for 2017 was just $467k:

Indeed, total stock-based compensation for the last five years has been $2m — or $11m less than the aggregate $13m ‘buyback’ spend.

I must add that stock-based charges are calculated using very high-brow formulae and I have no reason to question Somero’s bookkeeping here.

In addition, I doubt investors who have seen the share price surge from 20p are complaining too much about the buyback expense.

Nonetheless, Somero’s buybacks do illustrate the true cost of its stock options.

In fact, a layman could argue that the total $64m accounting profit produced between 2013 and 2017 was flattered by the $11m difference.

The boss is 71 and owns shares worth £4m

The directors who enjoyed a lot of those options are named below:

The board is elderly — the chief executive is 71 and the non-exec chairman is 83. Succession planning may well be a regular discussion topic.

At least the chief executive has been in charge since before the banking crash. I therefore hope his experience of that downturn will put shareholders in good stead should difficult trading conditions ever re-appear.

The boss owns shares with a current £4m value… 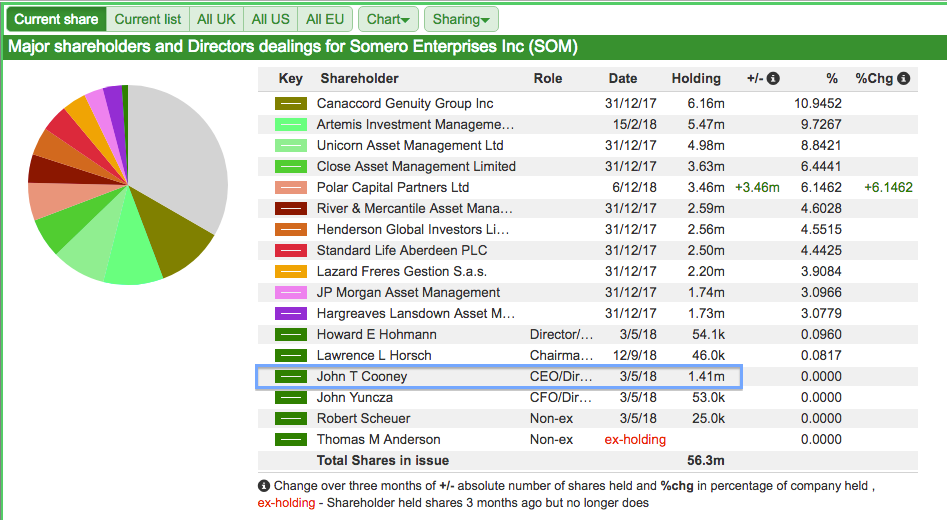 …and does not appear to be outrageously paid given the business reported a $25m operating profit for 2017:

“[We] see strong activity across our entire geographic footprint and strong interest across our product categories in H2 2018. With the broad-based opportunity for growth and the performance of the Company in the first half of 2018, the Board remains confident in delivering another year of profitable growth for our shareholders in line with current market expectations.”

City brokers have translated the remarks into the following forecasts: 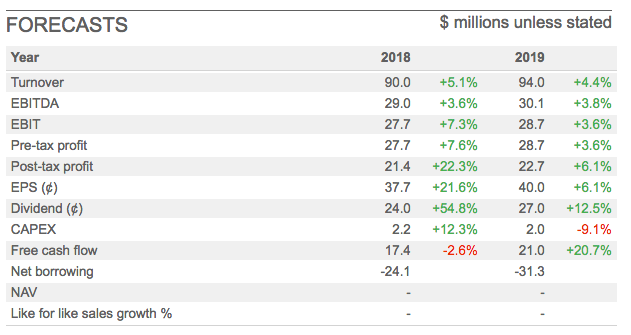 I should add that Somero achieving the forecast $90m turnover would meet the group’s target set five years ago.

Expected earnings of $0.38 per share convert into approximately 30p per share and support a P/E of less than 10.

The anticipated $0.24 per share dividend converts into approximately 19p per share and supports a yield of more than 6%.

My reading of Somero’s statements suggests the projected $0.24 per share dividend includes a special payout, and that the ordinary dividend may be in the region of $0.19 per share to support a possible 5% income.

Demand for new warehouses versus the threat of recession

Articles such as the one below suggest Somero operates with an industry tail wind: 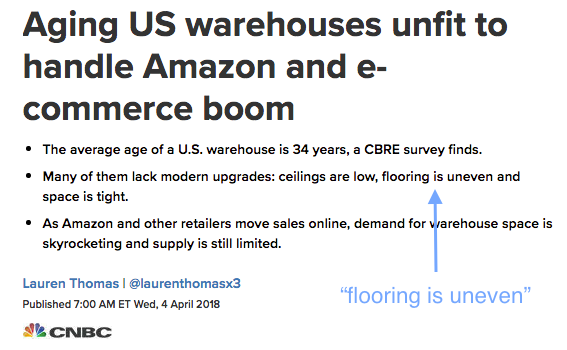 That tailwind has no doubt assisted the group’s recent impressive progress.

Within the last five years, turnover has doubled, margins have risen to super levels, while the cash has piled up and started to fund special dividends.

And yet the aforementioned P/E and dividend yield do not appear that demanding.

Mind you, the obvious danger is a US recession and orders for Somero’s machinery suddenly disappearing.

Famous last words, but I doubt a repeat of a 2008/9-type downturn will be experienced any time soon. However, I can imagine the American economy at some point suffering a few lean years.

Were Somero’s machine-related sales to drop 20% from their 2017 level,

my rough sums suggest turnover could be $70m and earnings could be 19p per share.

The P/E on that scenario would be 15.

Bear in mind, too, that Somero currently enjoys the luxury of a $20m net cash position to ride out any recession.

The cost of any future ‘buybacks’ ought to be considered as well.

Anyway, I will leave you to determine whether Somero’s apparent niche, recent performance and modest valuation are enough to offset the chance of a US downturn and slowing orders.

The group’s next trading statement — due within the next week or two — may assist with your decision.

Disclosure: Maynard does not own shares in Somero Enterprises.