Screening For My Next Long-Term Winner: IntegraFin (LSE: IHP) 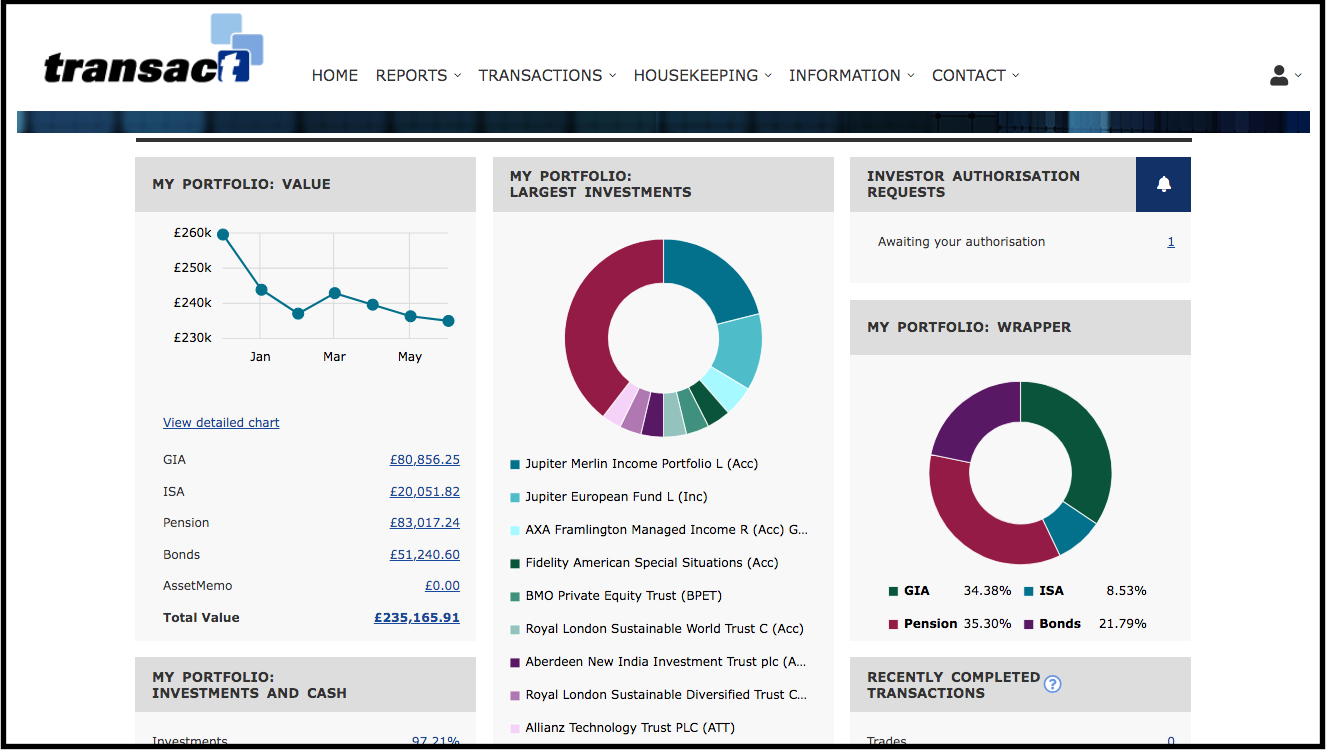 The exact filter criteria I employed for this search were:

I applied the screen the other day and SharePad returned 17 matches:

(You can run this screen for yourself by selecting the “Maynard Paton xx/06/22: IntegraFin” filter within SharePad’s incredible Filter Library. My instructions show you how.)

Among the 17 matches were Ashmore, Best of the Best, Cake Box, CMC Markets and Jarvis Securities. 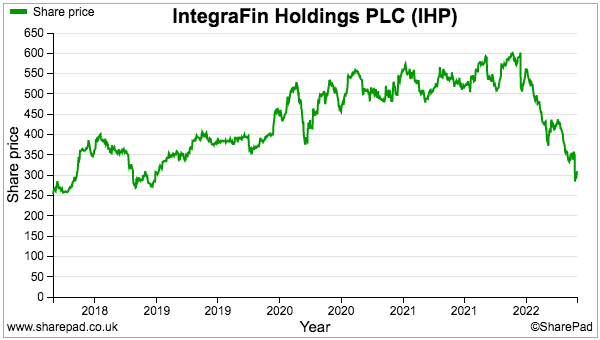 …only to plunge to 310p this year. Let’s take a closer look.

Searching online for ‘IntegraFin Michael Howard’ sadly yields nothing about the company’s early days and its co-founder.

The basic story is Mr Howard worked for Norwich Union during the late 1980s, but then established a software firm in 1992 that essentially evolved into this FTSE 250 business.

The group operates a Hargreaves Lansdown-type platform for financial advisers, and since 1999 has gone from nothing to handling investments worth £54 billion on behalf of 7,000 advisers and their 219,000 clients.

IntegraFin’s ‘Transact‘ platform has become increasingly popular, and in fact attracted the most net client money (£1.39 billion) among all adviser platforms during the first three months of 2022 — and beating the likes of Aviva (£1.38 billion), Quilter (£1.00 billion) and Abrdn (£0.92 billion).

The Transact platform was developed by Mr Howard’s original software business until its purchase by IntegraFin during 2016. The deal seemed logical enough; Mr Howard had co-founded IntegraFin and the IT was brought entirely in-house before the company went public.

IntegraFin’s track record has been remarkable. Client assets (defined by the company as ‘funds under direction’) have grown every year since inception: 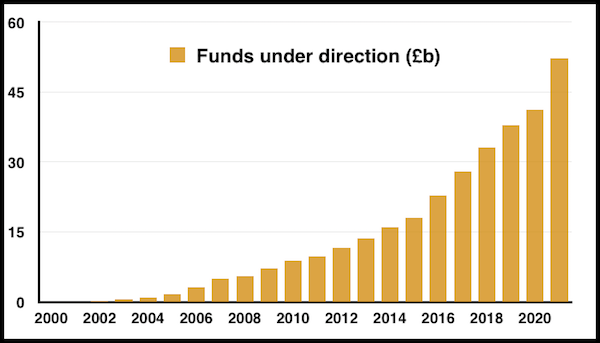 Transact was the first platform of its type in the UK, which no doubt ensured good early progress.

Subsequent growth was then underpinned by a “premium, high-touch, personal service” alongside a commendable policy of “responsible pricing” –IntegraFin regularly reduces its charges to “share the benefits of scale economies” with clients.

Even more remarkable is the consistency of the new client money arriving on the platform. Every one of the last 22 quarters has witnessed a net positive inflow: 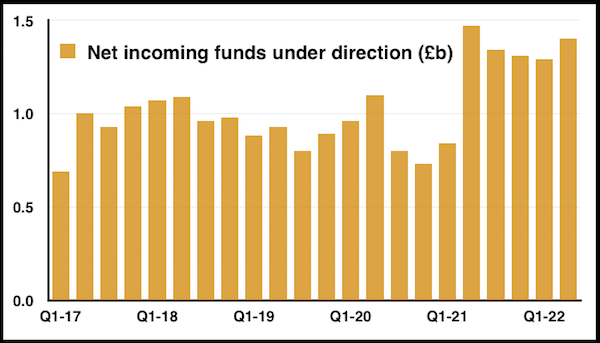 Revenue is earned through platform charges (based on a percentage of assets held), product fees and dealing commissions. Client money is invested within pensions, ISAs, general investment accounts and, notably, Onshore and Offshore Bonds.

IntegraFin’s website reveals the business scored its maiden annual profit during 2004 with a £500,000 surplus, with profit thereafter surging to £95 million: 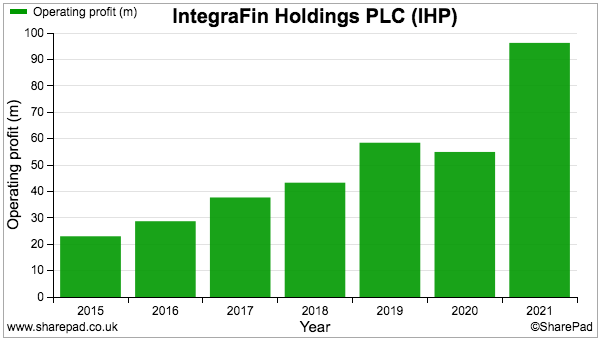 The profit chart above is not strictly representative of IntegraFin’s growth due to some awkward accounting (more on that in a second). Revenue and the dividend thankfully require no re-jigging and both show a smooth upward trajectory: 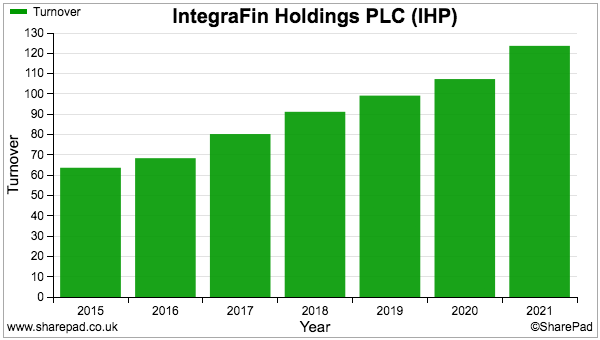 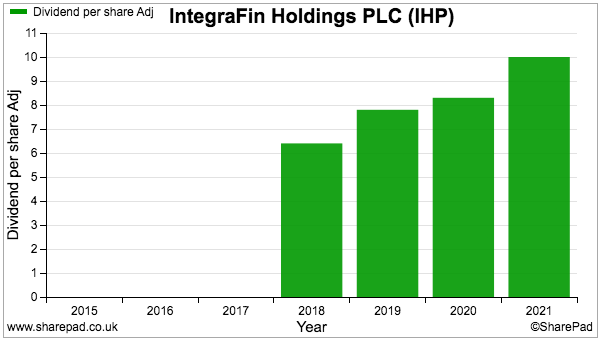 None of this is SharePad’s fault; just that IntegraFin’s statutory reporting includes gains, losses, assets and liabilities that are in fact all attributable to certain clients.

The annual report shows what is going on:

During 2021 for example, operating profit was boosted by £32 million attributable to client policies, while the prior year witnessed a negative £3 million movement.

(Not helping matters is IntegraFin incorrectly stating ‘policyholder’ profit instead of ‘shareholder’ profit within the 2021 report! But the £63 million shown is the operating profit attributable to shareholders for 2021)

Note that the aforementioned 78% operating margin is obtained from the £95 million total operating profit as a proportion of the £124 million revenue. Apply the £63 million shareholder profit instead, and the margin still comes to an extremely impressive 51%.

IntegraFin’s (shareholder) profit margin has in fact improved from 32% since 2015, emphasising the economies of scale that can be enjoyed by attracting more clients to a financial-services platform.

Good examples of such policies are Onshore and Offshore Bonds, which offer tax-planning advantages beyond mainstream financial products for wealthy investors.

Movements within these linked insurance policies create further interference with the income statement:

The fees taken by IntegraFin’s Transact platform were equivalent to 0.3% of the average value of the linked policies during 2021. Third-party fees (presumably those collected by the financial advisers) took another 1%. No doubt the underlying investment product (e.g. a managed fund) extracted charges, too.

Revenue from linked insurance policies has been significant since the flotation, bobbing between 46% and 48% of the total top line: 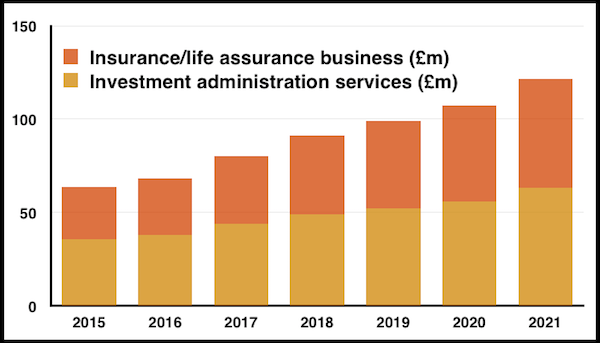 IntegraFin’s substantial exposure to linked insurance policies differs to that of fellow platforms Hargreaves Lansdown and AJ Bell, both of which focus on standard investment products and therefore do not suffer the same awkward bookkeeping.

Suffice to say, anybody investigating IntegraFin will have to become comfortable with the linked insurance policies and the associated accounting… as well as SharePad producing some peculiar cash-related charts: 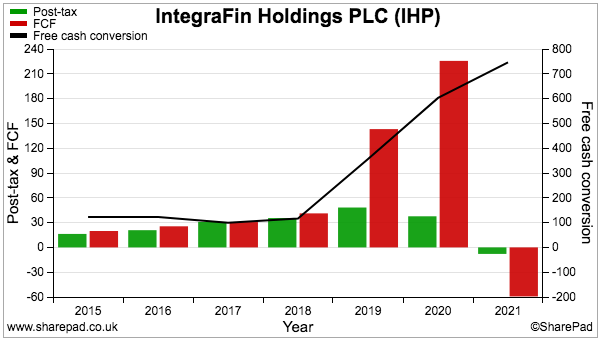 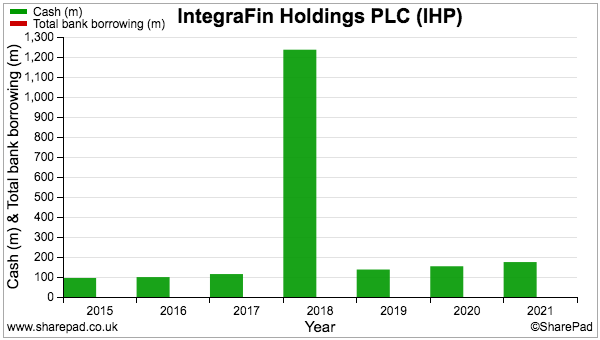 Cash generation does appear sound though. My inspection of the accounts showed shareholder cash advancing from £88 million to £176 million between 2015 and 2021, during which time IntegraFIn also paid dividends of £138 million while receiving no money from new shares and new loans.

Employees, AGM voting and no CFO

One SharePad chart not affected by the insurance accounting is revenue per employee: 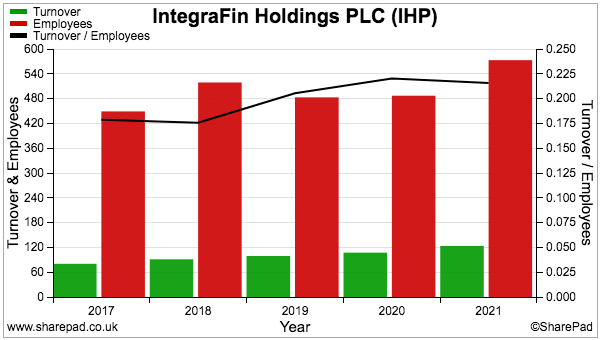 Emphasising the scalable nature of financial platforms, sales ‘productivity’ per head has increased by £50,000 — or nearly 30% — during the last five years.

IntegraFin’s principal employee is the aforementioned Michael Howard, who co-founded the group and, before that, its software developer. Mr Howard remains an executive director and retains a 10%/£96 million stake after selling half of his shareholding during and following the float.

Complementing Mr Howard’s investment is his ‘thin cat’ remuneration. His basic pay appears to be just £50,000 and he receives no bonuses, no benefits and no pension contributions.

Nor does Mr Howard — or the rest of the board — own any LTIPs. The annual report states:

“We firmly believe that a traditional LTIP with three year time horizons would, for our business model, drive the wrong behaviours and potentially have unintended consequences. We do not believe that high performance pay upside, measured over just three years, is a pay model which aligns to proper long-term thinking and stewardship of our business.”

But oddly given the LTIP stance, IntegraFin does operate a performance share plan (PSP) that grants three-year nil-cost options to directors and senior managers:

“The exercise of the PSP awards is conditional upon the achievement of a performance condition set at the time of grant and measured over a three year performance period. “

Concealing the performance condition is not ideal, but the PSP options alongside a wider employee share plan represent only 1% of the share count.

Not every investor likes the board’s pay arrangements; 8% of shareholders this year — and 18% the year before — voted against the remuneration report.

AGM voting can in fact be quite strange at IntegraFin. In particular, Mr Howard received only a 50.2% vote for his re-election in 2021 after skipping two of the six board meetings. Mr Howard lives in Australia and the pandemic prevented his attendance.

IntegraFin’s other two executives are both long-time employees, but something to note is the absence of a chief financial officer.

As well as the awkward insurance accounting, the books contain regular niggles that a proper CFO could have averted.

For instance, I could not reconcile these divisional figures…

… while some entries suddenly disappeared following a management “review“:

“Following a review of the terms of the agreements relating to establishment charges paid to policyholders’ financial advisers…the deferred acquisition costs and deferred income liabilities have… been derecognised in the financial year ended 30 September 2021, to bring the accounts in line with the accounting standards.”

Half-year figures issued last month did not read too badly.

Funds under direction during the six months advanced by £1.4 billion after net new client money of £2.7 billion was offset by market and other movements of £1.3 billion. Client numbers meanwhile improved 9% and adviser numbers increased 5%.

All that translated into platform revenue up 11% to £65.3 million and platform profit attributable to shareholders up 9% to £33.5 million. The interim dividend was lifted 7% to 3.2p per share.

Although the numbers were positive, the management narrative was not particularly upbeat:

“The general economic outlook has deteriorated from that prevailing this time last year…. [and] now we are faced with major global uncertainty arising from Russia’s invasion of Ukraine and the significant, resultant effects. When added to the existing inflationary pressures, these are negative drivers for Transact revenue, and for all round expenses.”

The prospect of weaker markets and new client money possibly reducing to a trickle perhaps explains why the shares have suffered a rough time this year.

Lower asset valuations will of course impact fee income, as may the decision to reduce the annual charge — from 0.27% to 0.26% — for approximately 75% of clients from next month. IntegraFin’s “responsible pricing” has in fact cut charges from 0.37% for all clients since 2015: 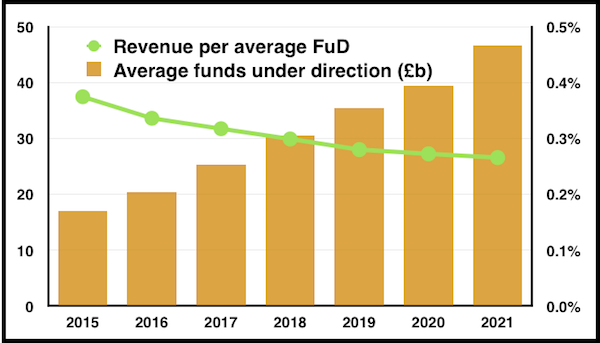 Doubling up the first-half platform performance gives a £67 million operating profit and earnings of £55 million or 17p per share. The forecasts shown in SharePad for 2022 fall slightly short of those projections due to the inclusion of small losses from a recent acquisition:

These shares were trading at almost 40 times earnings less than a year ago.

Right now, though, a multiple of just below 20 does not seem completely outrageous for a wonderfully profitable company with an impressive track record that — a deep bear market aside — could continue to deliver respectable growth during the years to come.

But if a deep bear market does arrive, these the shares could easily fall further as platform fees decline and new clients become extremely elusive. Canny investors may find such market conditions then pricing this high-quality company at truly irresistible levels.

Maynard writes about his portfolio at maynardpaton.com. He does not own shares in IntegraFin.

Is IntegraFin on your watch list? Share your thoughts in the SharePad “IntegraFin” chat. Login to SharePad – search for IntegraFin and click on the chat icon in the top right, the IntegrFin chat will be shown under “Current share”.