Bunzl, a company I investigated last year, is a classic roll up

A distributor of everyday items consumed by businesses and organisations, it routinely acquires much smaller distributors, improves their efficiency and creates economies of scale. This reduces customer’s procurement costs, and improves the profitability of the mothership.

To grow, the company has repeated this routine many times over the last couple of decades, so many times that today its turnover is greater than £9bn.

Bunzl’s Borg-like assimilation of businesses has proved to be very successful but there is another way, often used by another enduring and profitable roll up, Halma.

Halma acquires “life saving technology companies”, businesses that supply safety, environmental and healthcare products and services, but usually it allows them to operate independently, The mothership helps them with administrative functions and marketing, encouraging them to cooperate with innovation, and providing capital if necessary.

The roll up strategies of these companies have been effective because they operate in fragmented industries in which there are many similar small firms to roll up.

Bunzl feeds on distributors that have grown up to supply local and regional businesses and Halma fishes in a pool of tens of thousands of specialist technical businesses.

Because the companies being acquired are so similar to the companies the roll up has already acquired, they should slot into the mothership like peas in a pod.

Unlike other acquisitive companies like conglomerates, roll ups are not looking to diversify into different industries, which would eventually make them unwieldy and difficult to manage.

Neither do they seek to buy failing businesses that they believe they can turn around, another more risky acquisition strategy.

The small size of the acquisitions in relation to the mothership makes them easier to digest and means acquirers rarely have to raise money from investors or borrow risky amounts. They can finance the acquisitions from the profits of their previous acquisitions.

The financial strength of the roll up is an important element of the strategy. Sellers of businesses want the negotiation and their legacy to be in safe hands, even if they do not intend to work under the new owners. Often previous owners are encouraged to stay so the company retains their valuable expertise.

A blueprint for the roll up strategy was laid out by David Barber, Halma’s co-founder in a speech in 1997. His recipe for the perfect acquisition was:

Bolt-on acquisitions are often cheaper than large acquisitions not just in terms of the absolute cost but also the multiple of profit paid, especially if they are private companies.

That is because takeovers of listed companies are high profile and attract competition, requiring acquirers to pay premiums to often already inflated share prices. The acquisition of a small private company can sometimes be uncontested.

The roll up strategy is used by private equity firms that bundle companies together and release their value all at once in an IPO.

But as we have seen in Bunzl and Halma, roll ups are also hiding in plain sight on the stockmarket, releasing value incrementally from a succession of acquisitions and still growing profitably despite the fact their targets have grown in size with them.

Younger roll ups targeting smaller companies are there for us to invest in too.

How to spot a roll up

We can spot roll ups in SharePad pretty easily by looking at acquisition spend. If a company is spending little and often, say less than its free cash flow most years, then it is probably a roll up. 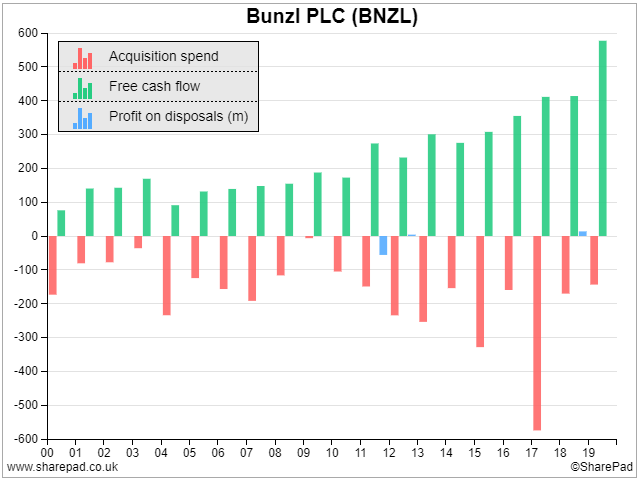 Every year for the last two decades Bunzl has spent money on acquisitions, and most years it spent less than it earned in free cash flow. This may well be sustainable. The same is true of Halma: 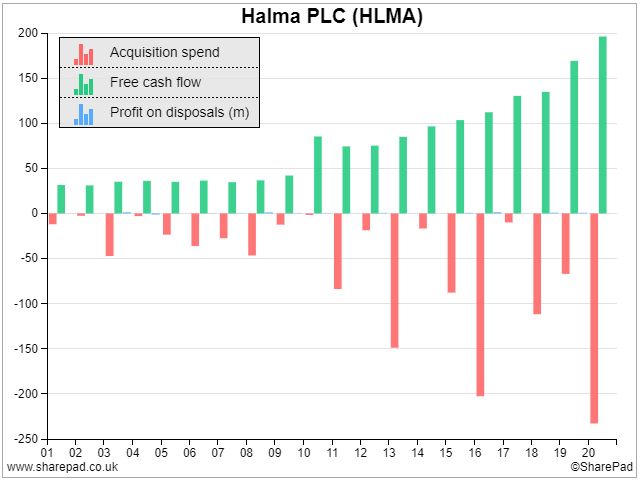 Secondary checks to give us confidence the roll out is successful might include the share count and debt levels over time, which should be stable if the company is self-financing acquisitions.

Now let us look at an acquisitive company that is in more of a hurry than a roll up. RWS is a translator: 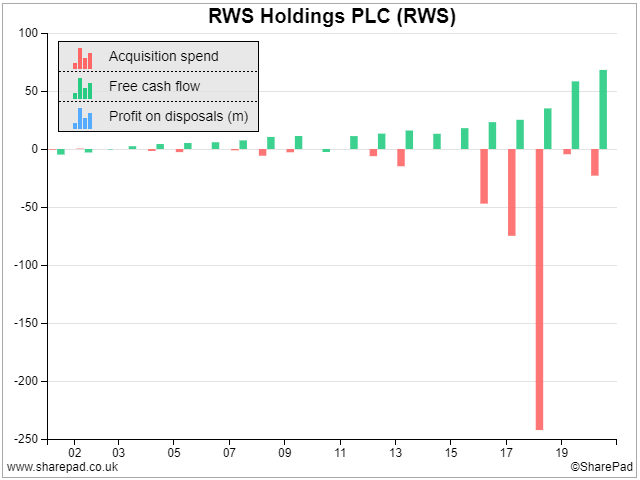 Recently RWS’ acquisition spending has exploded as it has acquired businesses that translate different things, and translate them in different ways.

Previously it was a specialist in patents, but now RWS localises computer interfaces and documentation for pharmaceutical companies as well. It has also acquired software companies, so more of its translation can be automated.

When Bunzl gobbles another company it becomes a slightly bigger Bunzl. RWS is transforming itself.

Space-baring our way to roll ups

It is very easy to spacebar our way through a list of shares in SharePad and pick out potential roll ups.

In addition to Bunzl, I have my eye on these shares:

You can see for yourselves in SharePad that these companies have grown sometimes over many decades without, in most cases, repeatedly tapping investors for financing or increasing their levels of gearing. This is in itself a vindication of the strategy.

For me though, the acid test is whether they have been good acquirers and whether they are likely to continue to be, is Return on Total Invested Capital, which includes the value of goodwill and other intangible assets created when one company acquires another at cost.

This ratio tells us whether these companies are earning decent returns on the price actually paid for their acquisitions.

I explained how to calculate ROTIC in an article on SDI, and I may do a comparison of roll up ROTICs in a forthcoming article.