A company that is already successful

It would be convenient to report that I diligently pick every share I investigate from a Sharepad filter of exquisite construction, but it would be untrue.

Sometimes I click around randomly until I find an interesting stock. I had heard Bunzl had had a “good pandemic”, and when I saw that its PE ratio and had not breached the stratosphere I decided to take a closer look.

Bunzl has a solid reputation among investors. There was a bit of a panic during the Great Financial Crisis, when the company’s price tumbled 37%, and a momentary crisis during the early days of the pandemic, when it suffered a similar fate, but it rebounded almost instantly.

By and large, the price chart travels reassuringly from bottom left to top right: 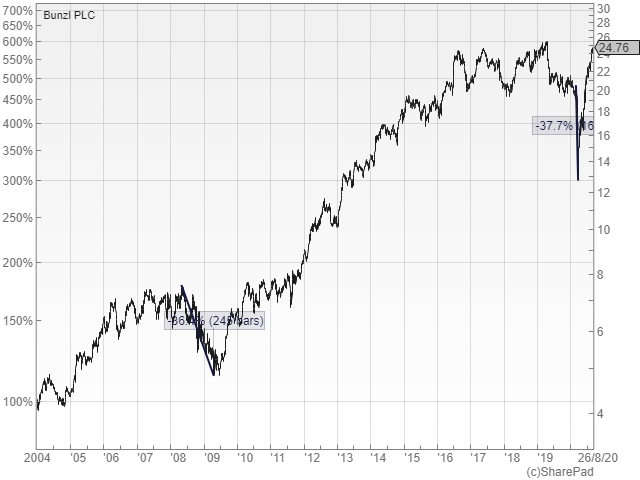 A trip in a time machine

Ten years ago, in the year to December 2009, Bunzl made a profit of just over £250 million (in terms of EBIT – Earnings Before Interest and Tax) according to SharePad. In 2019 it made £540m. In other words profit has more than doubled.

Since most investors judge the value of a business by a multiple of profit, we can say that, other things being equal, since profit has more than doubled so too has the value of the business.

In fact, shareholders have done better because investors’ confidence in Bunzl has grown, and the multiple of profit they are prepared to pay for the shares is greater. In 2009, Bunzl’s Enterprise Value (EV) was less than 12 times EBIT according to SharePad, today it is 18 times EBIT.

It would be a brave man to forecast that shareholders would be willing to pay an even higher multiple of profit in ten years time, but even if the multiple stays the same, more than doubling your money in ten years is a satisfactory outcome.

The question long-term investors need to answer then, is whether Bunzl can more than double its profit again over the next ten years.

This is perhaps an easier question to answer with reasonable confidence than for many companies because Bunzl has a long-established strategy. It has been following it since 2004, the start year of the price chart at the beginning of this article.

Bunzl distributes consumables. It supplies everyday items used by businesses; packaging, cleaning products, safety equipment, and medical items to restaurants, supermarkets and other retailers, industry, hospitals and care homes. These are not raw materials or products customers will sell, they equip staff. 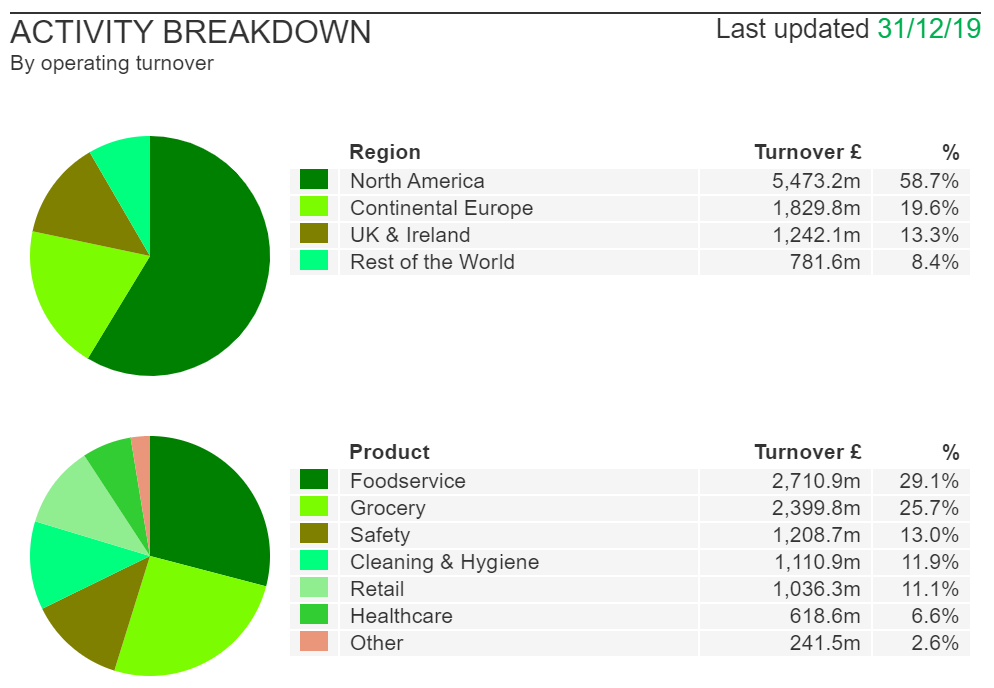 The company is the product of more than 160 acquisitions since 2004, when it disposed of its manufacturing arm to focus on distributing consumables, a division of the business it had already been growing by acquisition since 1981. Much of Bunzl’s recent acquisition activity has been focused on safety products.

Bunzl has grown into an everything store though. It says the essence of its business is to provide all the essentials its customers need from stock, wherever they need it.

Because of this guiding principle Bunzl must keep acquiring because scale brings efficiencies. While distributors add value by advising customers, their biggest contribution to their customers’ businesses is to get the goods to them cheaply and on time. 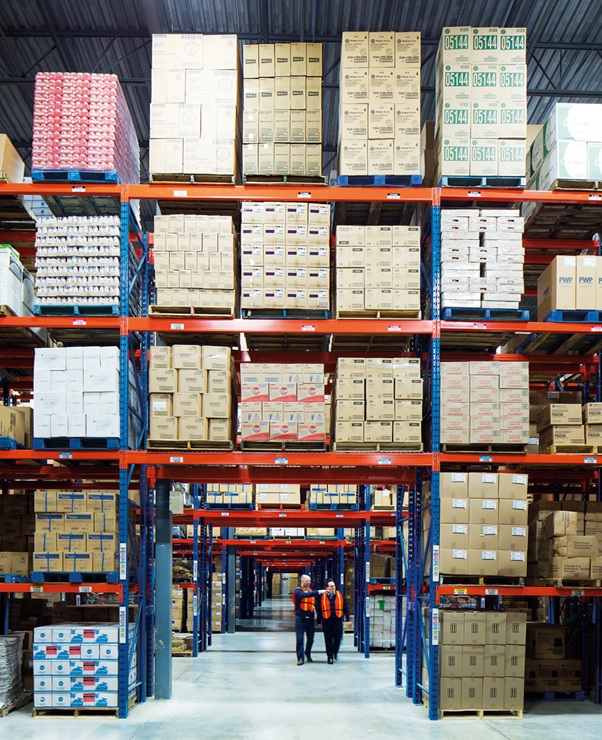 As a large buyer, Bunzl can negotiate better prices with suppliers and pass some of the savings on to customers. By offering most of their needs it simplifies purchasing, also saving them time and money. Because it keeps everything in stock, customers do not have to tie up as much of their money in their own warehouses. And by operating in 30 countries, it can supply customers pretty much everywhere (though it would like to expand to a few more).

As an acquirer, Bunzl buys up similar businesses and consolidates their warehouses, replacing disparate and sometimes inefficient systems with its own more efficient ones. However assimilation is not intended to extinguish entrepreneurship in its subsidiaries. The managers of acquired businesses are encouraged to stay, as did the current chief executive. Frank van Zanten joined Bunzl in 1994 when his family’s business was acquired.

Proof of the pudding is in the results

Distributing consumables is a steady business. Their cost tends to be minimal compared to a customer’s total costs and they are still required even if times are tough. As Bunzl already offers competitive prices, customers are not inclined to penny pinch and turnover holds up in recessions.

Bunzl’s relentlessness is mirrored in its results over the years. While it has grown, the most important financial metrics for efficiency and financial stability (profitability, cash conversion, and debt) have been remarkably stable. It has achieved a 27 year track record of dividend growth. 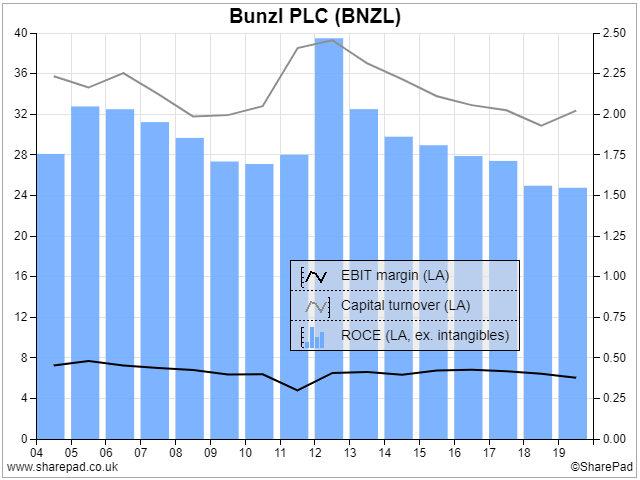 Bunzl earns impressive ROCE. The relatively weak performance of 2018 and 2019 was due to an increase in capital employed and the disposal of a profitable but non-core business in 2018.

Excluding intangible assets, which are mostly related to acquisitions and do not reflect the running costs of the business, Bunzl has routinely achieved a Return on Capital Employed of 25% or more since 2004 and operating cash conversion of 120% plus.

The businesses Bunzl owns are highly efficient. However it cannot put the money they earn to work as profitably because of the high cost of acquiring new businesses. Including the acquired goodwill and intangible assets at cost, Bunzl made a more prosaic but still very satisfactory Return on Total Invested Capital (ROTIC) of 14% in 2019 according to my calculations.

Even though the company serves businesses closed by the pandemic, like restaurants and hotels, its resilience was confirmed in half-year results published in August. The company reported strong growth in the six months to June 2020, compared to the period to June 2019.

Particularly welcome was an improvement in return on capital given recent declines, which delivered a 13% increase in adjusted operating profit from a 7% increase in revenue.

Unsurprisingly, the company experienced a shift in demand to safety, healthcare, cleaning and hygiene, which are among Bunzl’s more profitable products.

While profit declined in the UK and North America, continental Europe and the Rest of the World saved the half-year thanks to large orders for Covid-19 related personal protection equipment from governments, hospitals, food processors and grocery stores.

There was almost certainly an element of panic buying that will not be repeated in the second half of the year, but the company still expects its full-year result to be an improvement on 2019.

Although Bunzl paused negotiations with companies it might buy as the pandemic took hold, it quickly re-engaged once it realised that it could afford to. On the same day as the half-year results, Bunzl announced two acquisitions bringing the total so far this financial year to five, already a substantial step up in terms of spending compared to 2019.

Bunzl appears to have a repeatable strategy, and the resources to pursue it through thick and thin. While nothing in investing is certain, I would not bet against history repeating itself over the next ten years.