Preparing for the worst, capitalising on the best

Listening to Porvair’s long-standing chief executive Ben Stocks talk about the challenges ahead, it is clear the company is bracing itself. Phrases like “preparing for the worst, hoping for the best”, and “the overall balance is negative”, come readily to him.

This is a company I have long admired, but I have never had the courage to buy the shares because of its valuation. The share price isn’t obviously cheap now even though it is 30% down from its pre-pandemic high in February. 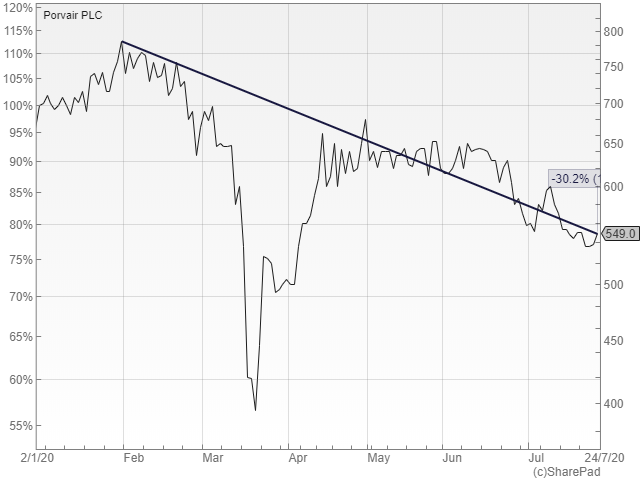 Porvair shares are down 30% from their peak before the pandemic. They are up over 1,000% since their all time low during the Great Financial Crisis (2009). Source: Sharepad

I will say more on valuation later, but if things are getting worse before they get better perhaps it is time to wipe the dust from the Porvair dossier.

Perhaps the best way of introducing Porvair, is by explaining how it is being affected by the economic consequences of the pandemic.

This snippet of a slide from the company’s half-year results presentation in June places Porvair’s markets on a continuum, left to right, from those most affected to one that is positively affected:

Porvair is experiencing the impact of Covid-19 on the economy in all of its businesses. Source: Half-year results presentation, June 2020

Porvair makes filters. The filters are consumables, which means they wear out and must be replaced bringing Porvair repeat sales.

They protect expensive equipment from contaminants, like hydraulic systems in aeroplanes and smelting equipment in aluminium plants, and they protect the environment from emissions, for example in gasification plants.

While there are other suppliers, companies are prepared to pay a little extra for a reliable component and tend to stick with what works. As a result, Porvair products are installed in equipment around the world. 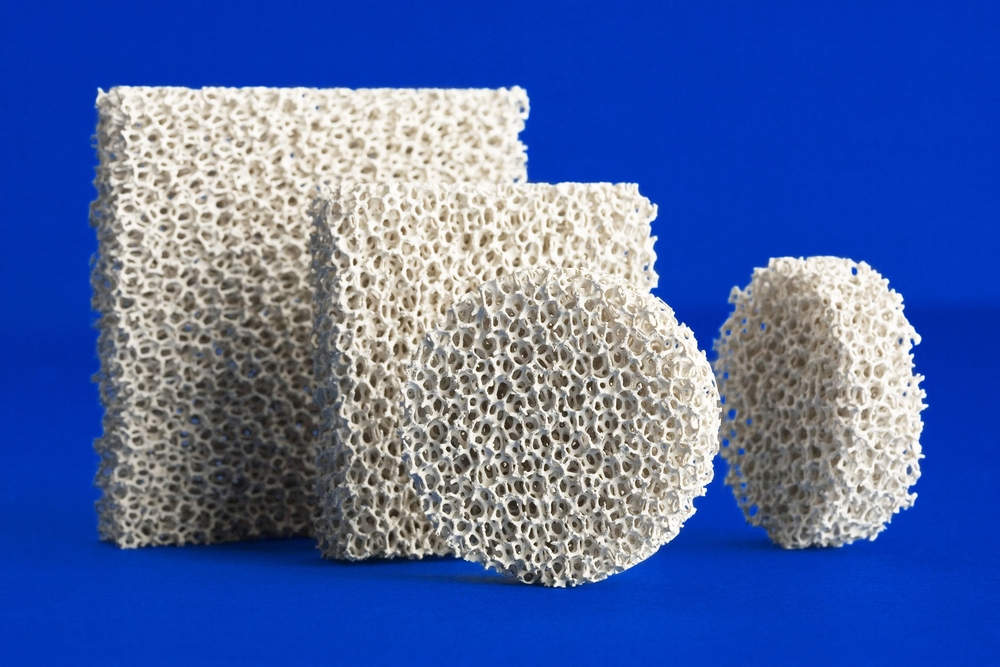 Porvair also makes chemical analysers and consumables to detect contaminants in water, a division that grew out of its microfiltration capability. The same division supplies equipment for the preparation of laboratory samples, which is booming due to the scientific effort to beat Covid-19. 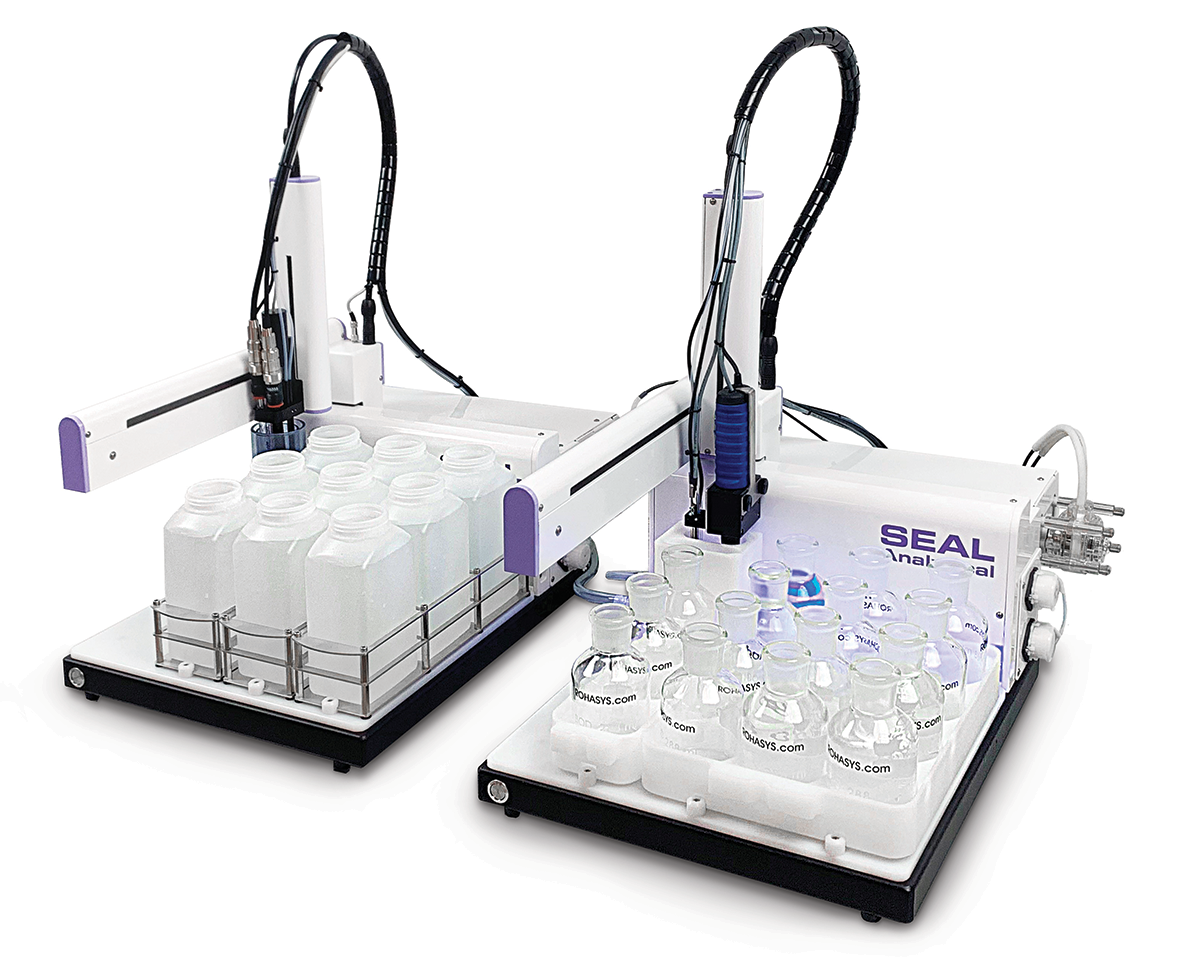 Under Ben Stocks, the company has followed the same strategy since 2004. It has improved, extended and patented the product range, supplied more territories, and reinvested surplus cash flow in lots of small acquisitions.

Trouble etched into the numbers

The prospects for many of Porvair’s markets are negative. Restrictions on travel mean the aerospace industry has contracted alarmingly. Demand for aluminium and other metals is highly sensitive to the global economy. If industry reduces production further, it will produce less emissions.

Over three-quarters of Porvair’s revenue will be squeezed by the pandemic and its aftermath in the year to November 2021. Source: SharePad. Aerospace, which is likely to suffer the greatest impact, is responsible for about 15% of turnover (Source: Porvair).

Trouble is already etched into the numbers reported for the first half of 2020 (December 2019 to May 2020). Despite a strong first quarter (December 2019 to February 2020), revenue fell 8% in the Aerospace & Industrial division (excluding the contribution of Royal Dahlman, acquired in 2019) and 6% in Metal Melt Quality, a division that supplies foundries. Even the Laboratory division made 5% less revenue due to the temporary closure of laboratories in China during the height of the pandemic, which reduced water testing.

Stocks says the company is positioning itself for recovery, cutting costs where it can but hanging on to employees and their skills to make sure it can increase production when the time comes.

Over the last twelve years, including the Great Financial Crisis, Porvair has grown revenue and adjusted profit at a compound annual growth rate of just over 10%.

But let’s see how acquisitive the company has been, because acquisitions muddy the accounting and our interpretation of long-term performance. Just by eye we can tell Porvair has spent much of its free cash flow buying other companies, especially in recent years: 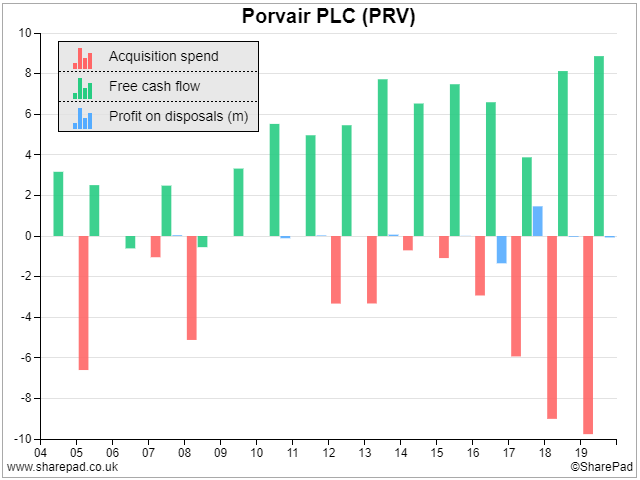 Porvair is a serial acquirer. The longest pink bar, nearly £10m of acquisition spend in 2019, was Royal Dahlman acquired in September 2019. It is a Dutch supplier of “innovative and reliable filtration systems since 1886”. Source: SharePad.

The good news is the acquisitions were self-funded. Porvair has not been a prolific issuer of shares, and its financial obligations have reduced over the period in comparison to capital employed.

The companies it has bought generally cost less than a year of profit for Porvair, a low-risk softly-softly approach that probably goes some way to explaining its consistent performance: 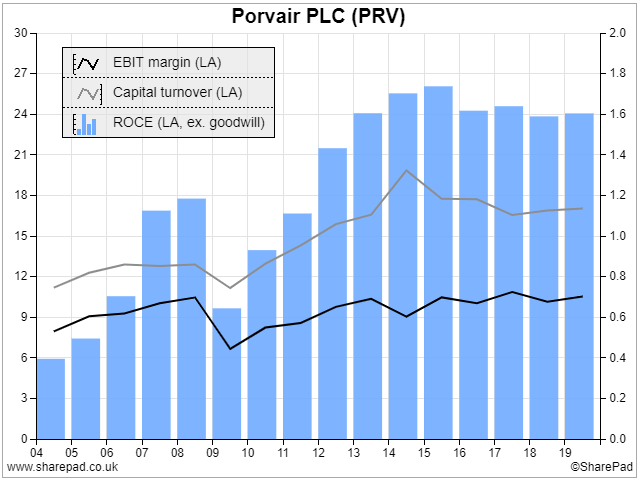 Since Porvair adopted its strategy in 2004, it has performed well. Initially Return on Capital Employed improved, the company remained profitable through the Great Financial Crisis, and recovered strongly between 2010 and 2012. Return on capital has since been consistently greater than 20%.

Profit margins are lower than they might otherwise be because of Porvair’s Metal Melt Quality division. While the rest of the business was relatively untroubled during the Great Financial Crisis, Selee (the division’s operating name), made a loss. The next crisis will of course be different, but Selee may be a better business now it has introduced new patented filters, and it is also a smaller part of Porvair. In 2008, 41% of Porvair’s revenue came from metal filtration compared to 27% today.

The division nudged operating profit margins up to 7% in 2019 after a long struggle to break into profit in China, which is a very price conscious market. It may be a pyrrhic victory though. In the half-year results, Porvair wrote off some of its Chinese investment due to the deteriorating geopolitical situation, and its likely impact on profit.

In the previous chart, I excluded goodwill, the additional cost of acquisitions over the value of the assets recognised on Porvair’s balance sheet. That’s because goodwill is a one-off cost, an accounting convention required to balance the books.

The company does not need to fund new capital to maintain this goodwill so the chart shows that the businesses Porvair owns now are highly profitable based on the capital required to continue operating them.

To assess whether Porvair paid a sensible price for the acquisitions we can look at the returns it has earned on capital employed including goodwill, using the standard ROCE measure*. The result will always be less impressive: 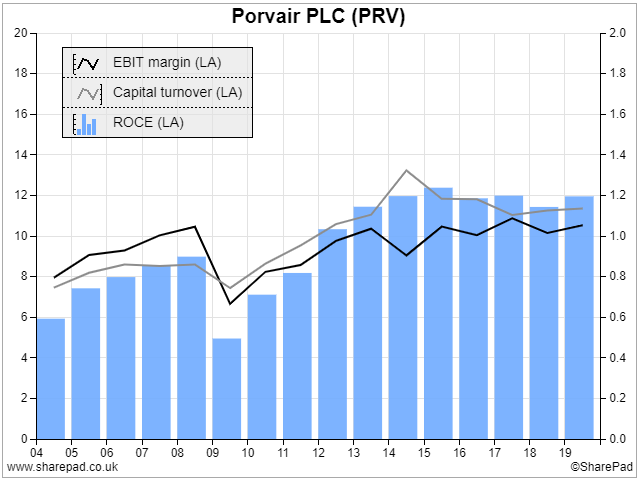 Including the cost of acquisitions, profitability has still been sufficient. Source SharePad.

While 12% returns are more modest they have produced good growth at Porvair.

For a quick check on the accounting we can look at Free cash conversion, the proportion of profit earned as cash. Cash conversion is reassuringly positive even though it has deteriorated from the extraordinary levels the company achieved during the financial crisis.

Then it reduced capital expenditure substantially, a tactic it may be compelled to repeat if we enter a prolonged recession: 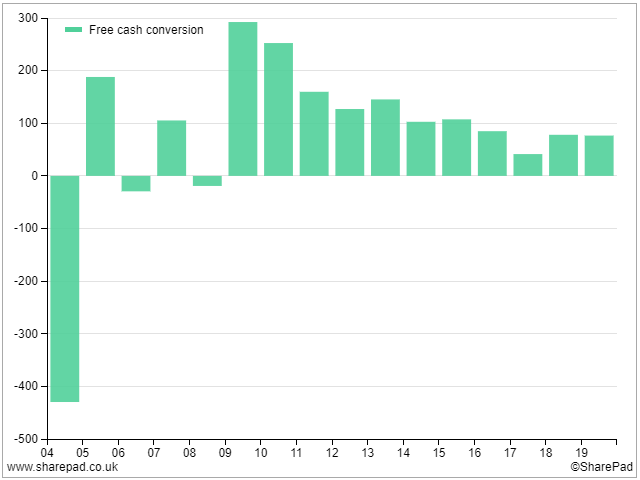 Free cash conversion has fallen, but not alarmingly so. Source SharePad.

In the year to November 2019, Porvair earned a record profit. In comparison, the share price looks reasonable (for a high quality company). According to SharePad its EV/EBIT is 18. EBIT is the measure of profit (Earnings before interest and tax) used by SharePad to calculate ROCE, and EV is a measure of the market value of the businesses (its price) including the value of its debt.

But we can be pretty sure that Porvair will not earn as much profit in 2020, and perhaps for longer. Profit varies, and using just one year of profit to judge a company’s valuation can mislead us.

Rather than rely on forecasts, which are not always available and only estimate profit a year or two ahead, I calculate a normalised EV/EBIT ratio based on the profit a company would have earned if it was only averagely profitable in the most recent year.

To calculate this figure we can export Porvair’s historical ROCE data from SharePad and calculate the average since the low point in 2009. It is 10.7%, not much worse than the 12.4% Porvair actually achieved.

History is unlikely to repeat itself but I think Porvair was a good business in 2009 and is a better business now. While an EV/EBIT ratio of 20 is high, it is not out of the question.

* ROCE includes the book value of goodwill in capital employed, which does not always represent the value at cost. When companies believe acquisitions will not be as profitable as they thought, they reduce the value of the goodwill (impair it, or write it off).

See Getting more out of return on capital, to learn more about making these adjustments.