I discovered discoverIE using a simple and fruitful method of finding new investment ideas: a list of shares sorted in SharePad by previous annual report date. Having squinted for a few minutes at financial charts showing profitability, cashflow and debt (more on that later), I thought the company looked promising:

Sorting a list in SharePad is perhaps the simplest way of prioritising shares for investigation. Source: SharePad

What’s in a name?

As an inveterate scrutineer of this list, discoverIE stood out because it is an established firm (it floated in 1988) and despite the slightly ridiculous name, I didn’t recognise it. Don’t be put off by companies with odd names. Veteran fund manager Peter Lynch loved them. In One Up On Wall Street, his manual for private investors, he wrote:

DiscoverIE wrongfooted me because it used to be called Acal. Acal was a distributor of electronic and IT components, but the business was changing and directors rebadged it in November 2017. The new name is a contraction and amalgamation of “discover innovative electronics”.

In 2011, Acal ditched the IT business and started acquiring manufacturers of electronics, which is surely why it wanted to incorporate the word “innovative” in its name. As well as buying and selling electronics, it was now working with customers to design and manufacture them.

The changing shape of discoverIE

Disposals and acquisitions have changed the shape of the business. By 2017 the manufacturing division (Design & Manufacturing) had reached revenue parity with the distribution arm (Custom Supply) and far surpassed it in terms of profit. In the year to March 2020, manufacturing earned discoverIE 64% of revenue and 84% of profit.

Investors have learned to be sceptical about acquisitions. Often they make companies bigger and less efficient but on the face of it, discoverIE’s largely acquired business is bigger and more profitable earning “underlying” profit margins of 13% in 2020. Distribution earned 4% profit margins.

Accounting for the acquisitions

Acquisitions distort accounting, which is one of the reasons why discoverIE excludes acquisition costs from its calculation of underlying profit. These costs include legal costs, which are treated as exceptional items because they reduce profit in the year of acquisition but will not be incurred again.

They also include the amortisation of acquired intangible assets, like customer relationships, created by accountants to show what the company has paid for when it has bought another company – it has bought customers. The asset is recorded on the balance sheet, and reduced in value over time just like a piece of equipment is depreciated. The amortisation reduces profit, but this too introduces a distortion because the accounting rules prevent a company from creating an asset if it recruits new customers in the usual way, by selling and marketing. Then the cost is expensed (deducted from profit as it is incurred).

To put the accounting on a consistent footing and make comparisons between different time periods and different companies more meaningful, we can treat acquired intangible assets as though they were created internally by adding back amortisation to profit, the numerator of return on capital, and deducting acquired intangible assets from capital, its denominator. Like the legal costs, they too become a sunk cost and are not part of the company’s underlying performance.

This, however, is fiddly (I cover the hows and whys in more detail in this article: Getting more out of Return on Capital). Companies are not always explicit about which assets are acquired and which are not, so the views available to us in SharePad are less discerning. Nevertheless the unadjusted view in SharePad gives us hope. 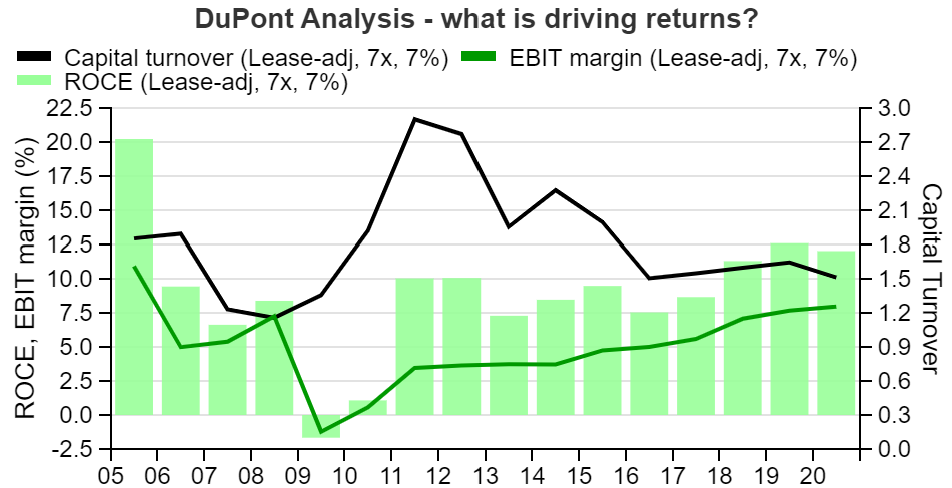 The SharePad “carousel” at the bottom of the Summary tab of Financials is a handy way to get a quick impression of a company’s performance.

Despite the weight of acquisitions, discoverIE has earned a return on capital of between 7.5% and 12.5% since the financial crisis. The years 2009 and 2010 are obviously a concern, and 7.5%, the lowest return on capital in the subsequent period, is only just about adequate, but the underlying figures are probably better.

Essentially, if the company were to stop acquiring businesses the return on operating capital is the return we might expect. The acquisitions seem to be making the underlying business better: 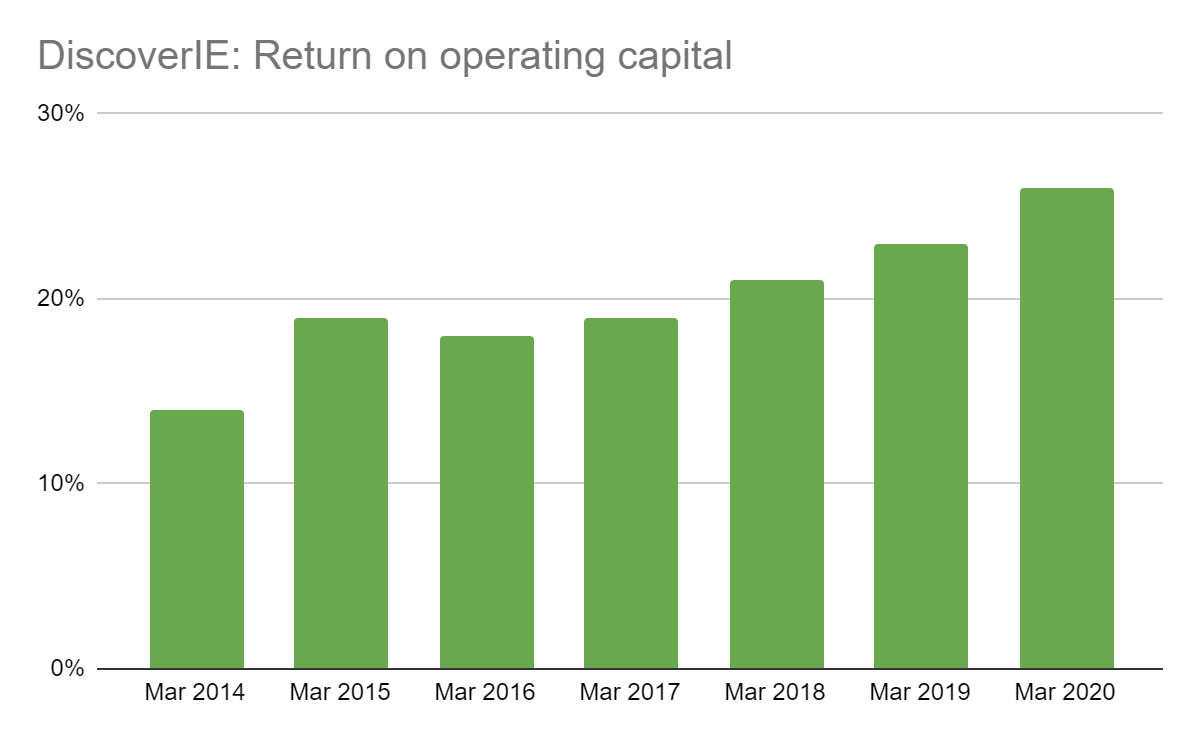 The acquisitions may be good businesses but are they good enough to justify the purchase cost, which we have entirely ignored in drawing this chart? We can answer this question in two ways. The first is to see if discoverIE is earning adequate returns on total invested capital including all the acquired intangible assets at their unamortised values. 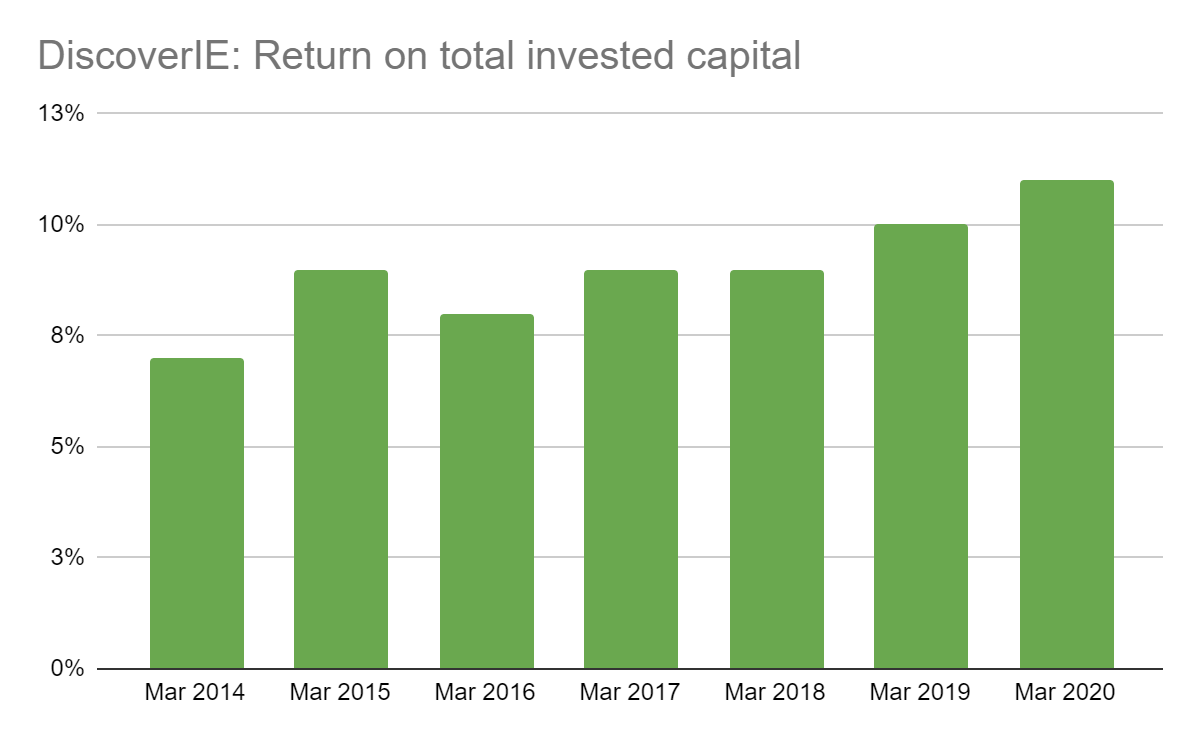 DiscoverIE’s returns are lower on this basis, but still adequate since the cost of the acquisitions are born immediately in this calculation, but returns should grow over time.

The second is by examining the financial condition of the company. If the cost of the acquisitions has pushed debt and lease obligations up too high there may be a risk the business won’t be able to support it.

In SharePad, discoverIE’s debt to capital ratio is about 20% but the company’s capital is swollen by intangible assets. We have not seen how these assets perform when times get tough, and it may be they do not perform as well as the company expects. A more conservative measure compares debt to operating capital, the money required to run the business (the denominator of Return on operating capital). On this basis, discoverIE is mostly funded by debt of one kind or another even though it has also issued substantial shares to fund acquisitions: 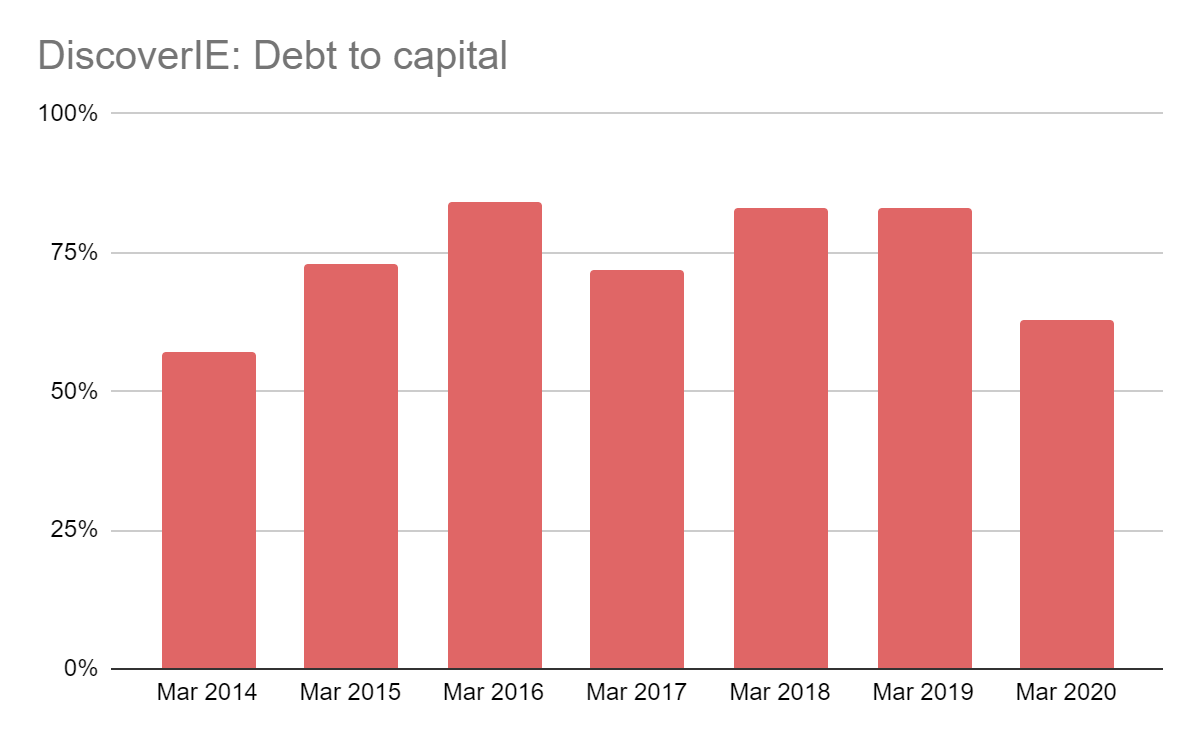 The company thinks the debt is affordable, because it is so profitable. Indeed, its banking facilities would allow it to borrow more. To be comfortable with debt it must also believe return on capital will not collapse again like it did in the financial crisis. To understand why, we have to turn our attention away from the figures and find out what is driving them.

discoverIE’s annual reports are forthcoming. It has been buying businesses with resilient characteristics: 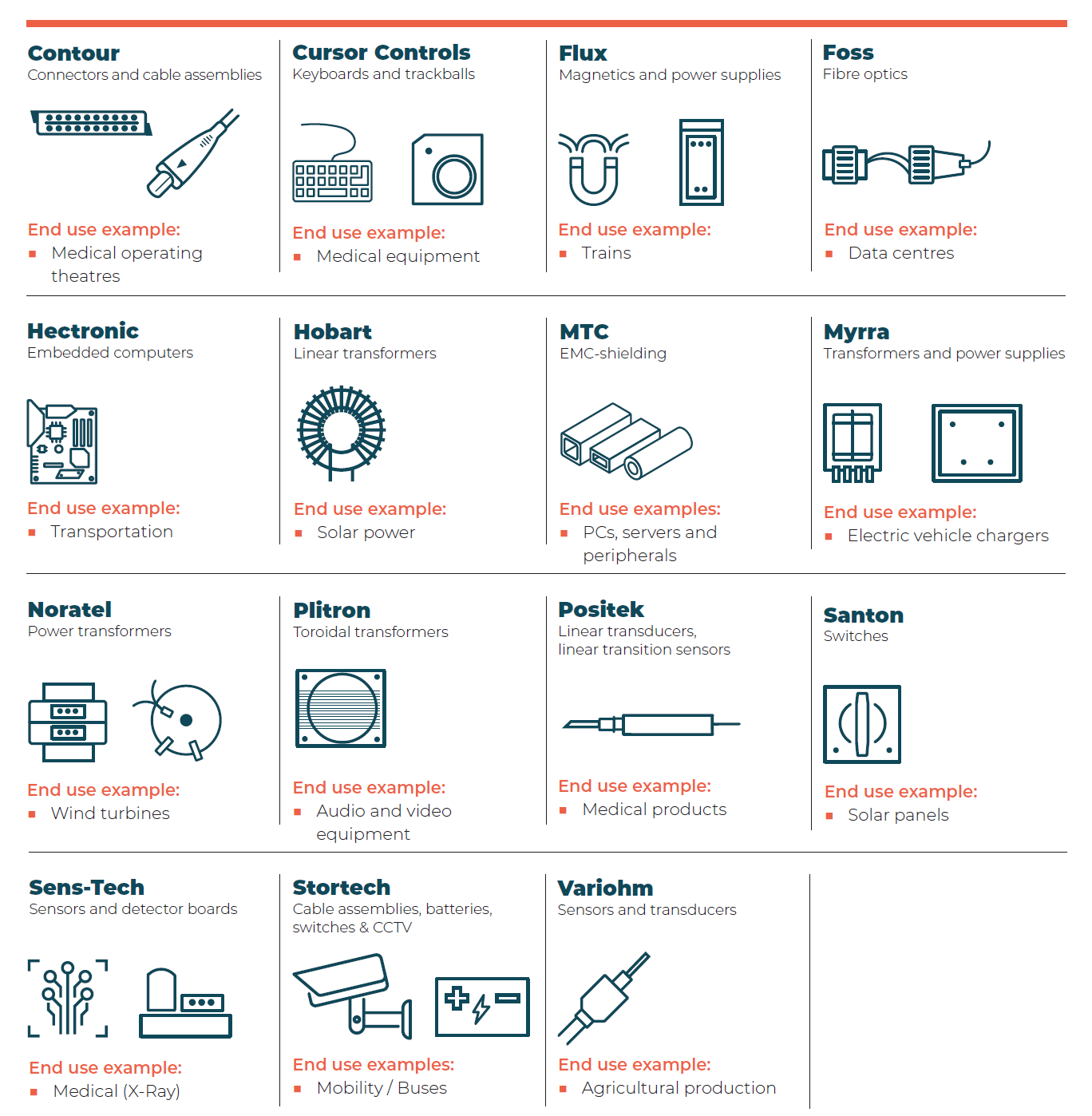 Specifically, it says these businesses manufacture specialised electronic components. discoverIE’s technical salesforce works closely with customers to customise these components for the machines they manufacture. Once designed into a product, it expects repeat business for many years bringing about enduring relationships with customers and the possibility of selling them more products from other group companies. In this way the business can be more impressive than the sum of its parts, which are in themselves impressive.

I wouldn’t over-egg the ability of subsidiaries to sell each other’s products though, as yet discoverIE only earns 2.5% of revenue from cross-selling. But it says cross-selling takes years to establish in a newly acquired business, and since many of its businesses are newly acquired, this is a metric to watch.

These qualities remind me of many of the good things about companies I already admire like XP Power, which designs and manufactures power supplies, and Solid State, a smaller and less international manufacturer and distributor of electronics.

DiscoverIE allows acquired businesses to operate autonomously. It encourages them to be entrepreneurial within the broader group’s financial controls, a strategy employed successfully at the relentlessly profitable manufacturer of scientific instruments, Judges Scientific.

Crucially, repeat business and higher margins, should give discoverIE more of a margin of safety in downturns. Repeat business may mean revenues fall less than they did during the financial crisis, and higher profit margins mean revenue would have further to fall before profit turns to loss.

As investors we must decide whether this is true. If discoverIE is what Peter Lynch described as a stalwart, capable of profiting through thick and thin, its debt adjusted PE (using my adjusted figures) is about 21, which is not unreasonable even though profit may be lower in 2021 due to the pandemic. In the first quarter of 2021, April, May and June of this year, revenue was about 10% lower, a good result considering the period contained the pandemic’s peak.

If, on the other hand, discoverIE is what Lynch described as a cyclical, a company that grows and contracts dramatically depending on the economic circumstances, now might be the worst of times to buy the shares.

Because the earnings of cyclical shares are so volatile, the price to turnover ratio is a more useful benchmark for value and discoverIE’s is near its all time high: 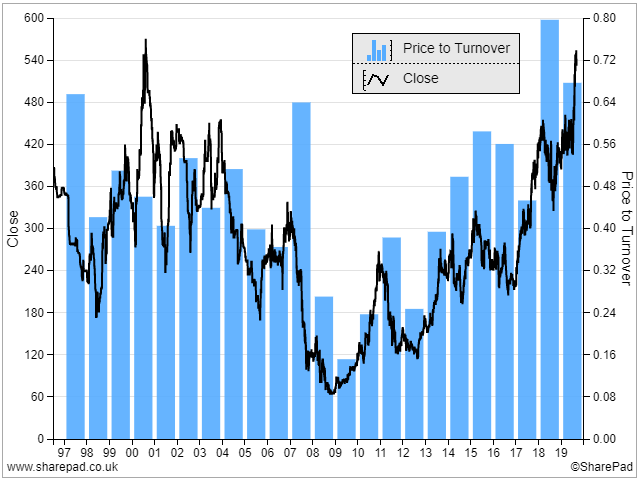