Before I started fishing for a share to investigate for this week’s article, I culled my personal filter library. Many of the filters are derivations, refinements that effectively render older filters redundant. Some are failed experiments. Being a simple sole, I cut the library down to four:

Because SharePad includes copies of the filters we write about into the product, you can access them from the SharePad’s filter library too.

Just by chance I noticed that Advanced Medical Solutions (AMS), a company that a reader regularly draws my attention to, passes all four filters. That is too good an omen to pass up.

AMS makes consumables used in surgery and wound care: Tissue adhesives, sutures, internal fixation devices and dressings. It sells them directly to hospitals, and through distributors.

One of its big brands is LiquiBand®, a skin adhesive which is used in place of stitching. Unlike traditional sutures, skin adhesives do not inflict further trauma on the patient, they do not need to be removed, and they can provide a water resistant and microbial barrier so further dressing may not be necessary.

LiquiBand can also be applied internally to fix hernia mesh. The product pictured is LiquiBandFix8®, which AMS hopes will become a big seller in the USA once it has filed for Food And Drug Administration (FDA) approval, probably in 2022.

Filtering SharePad’s AMS news feed for the magic words “competitive advantage” reveals that some of the company’s products may perform better in some respects than rivals’.

For example, AMS included this note on the advantages of LiquiBand Exceed™ in its full-year results for 2016:

Competitors may have upped their games since then and claims and counter-claims about the relative merits of medical products make it very hard for investors to know which is best*.

The key point is that innovation, regulatory approval and patent protection is expensive and takes a long time. It tends to restrict competition to those companies that already serve the market, which may explain AMS’ high levels of profitability. The company’s annual report for 2019 says it has 30 patent families.

In the year to December 2019, AMS earned a 16% Return on Capital Employed (ROCE), which is more than adequate, but it was the company’s worst performance in almost a decade. Typically ROCE has been comfortably over 20%, as you can see in the bottom row of the table below

This custom table generated in SharePad packs in a lot of detail, but essentially I have simply added ROCE to the bottom of the table I built in my last article comparing company adjusted profit to reported profit.

In 2019, profit at AMS declined, whereas in previous years it achieved double-digit growth. It is good to see that the company makes only small adjustments to operating profit. In 2019, company adjusted profit was 88% of reported profit, probably due to two small acquisitions.

In previous years, company adjusted profit and reported profit have been very similar.

Things have got worse, though, since the year-end because of coronavirus, which shut down factories, stopped hospitals performing routine surgery, closed clinics, and slowed regulatory approval of new products.

The impact of the pandemic on AMS is probably transitory. My filters tell us it is a well established cash rich business that has done well for many years, but the profit table tells us something had gone wrong even before the pandemic.

If we can make sense of this decline, we may be able to decide whether it is likely to be temporary or the beginning of a trend, and consequently whether AMS is a good investment.

If the cause is temporary, this once popular share is less popular today and may be better value. The share price has declined by more than 41% from its high point in 2018. 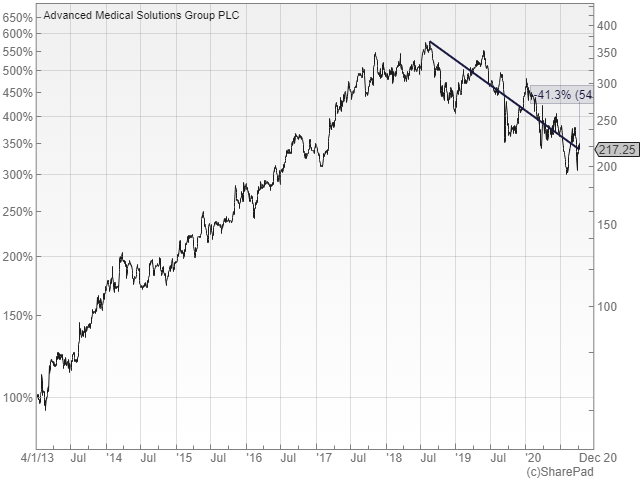 My investigation starts with destocking, a word I have come to fear over the years.

AMS sells to large customers, the largest contributed 12% to revenue in 2019 and 16% in 2018. When large customers have built up too much stock, for example because they were worried about a potential shortage that did not materialise or demand did not meet their expectations, they run down stock rather than ordering more. This can have a dramatic impact on a supplier’s turnover.

Destocking used to drive me mad at Haynes Publishing and at Portmeirion, two of my less successful investments, because I was never sure if growth was real or would just be taken away the next year. I discussed it in more detail in this article on Vitec, another company that routinely experiences destocking.

AMS’s steady profit growth until 2019 suggests it has not been dogged by destocking over the years, and we can confirm this by using a quick filter in SharePad to find announcements containing the word.

In 2011 and 2016, AMS experienced some destocking, and in a trading update for the half-year to June 2019 the company reported some customers had not replenished stocks built up for Brexit.

The results for the half-year published in September 2019 showed a sharp decline in LiquiBand sales in AMS’ biggest market: The Americas, and later announcements blamed the destocking on lost business at two large Group Purchasing Organisations. GPOs are groups of customers who come together to negotiate a better deal on their orders.

AMS also said that sales were down because the company did not have a device for the closure of large wounds in its LiquiBand portfolio.

On the face of it, all three developments are temporary. There may be more ructions ahead relating to Brexit, but ultimately UK trade relations with the EU should stabilise. AMS’ recent half-year results showed that it regained business with the two GPOs and as a result its market share had improved (albeit in a reduced market due to coronavirus):

AMS also has a device for large wound closure, the appropriately named LiquiBand XL, that may be approved in the US early 2021.

That said, AMS is operating in a competitive market in which it is not the market leader. The half-year results suggest that some of LiquiBand’s gain in US market share has come at a cost if the commercial agreements reported involve discounted pricing:

There is also competition from cheaper, lower quality competitors. For a couple of years AMS has warned of low-cost entry in the wound care market but in 2019’s full-year results the company reported competitor withdrawals in surgical and wound care as a result of new regulations.

This is good news for shareholders, but those low cost competitors are unlikely to stand still. AMS must keep ahead through innovation, and the good news is it appears to be. In the half-year to March 2020 it spent £3.8m on Research & Development, nearly 10% of turnover.

The challenge facing the company is to restore profitability while conducting this costly research and, competing with established competitors on price. It sounds like a tall order, but the company has been successful.

I am intrigued enough to add AMS to my watchlist, but humble enough to recognise I have only scratched the surface of the story.

vs Liquiband® Exceed™ a refutation of claims by AMS made by a Johnson & Johnson company, perhaps the market leader AMS refers to.