What does not kill a business can make it stronger

This article was not supposed to be about paper maker James Cropper. I set out to write about Animalcare, a veterinary pharmaceutical company, but I quickly became disillusioned, wretched even.

You probably will hear about Animalcare one day, because it is an interesting business, but it is also complicated and its complicatedness was epitomised by its latest full-year results.

Animalcare made a decent enough profit on a company adjusted basis, but it made a loss on a reported basis.

Reported profit is the result of applying standard accounting. Company adjusted profit excludes various items, usually costs, that are deemed unusual and/or not representative of how the business performed in the year.

For long-term investors, adjusting profit makes a lot of sense. We would not want our opinion of a company changed by some random event unlikely to be repeated or an accounting convention that muddies the picture.

The problem with company adjustments

The problem with company adjustments is they generally boost profit. Since the reputation and pay of executives is tied to profit it is in their interests to make big adjustments.

Big adjustments have two implications for the would-be shareholder. First, the company may be going through a sudden transformation making it difficult to work out what the future holds. Second, we must spend a lot of time trying to work out whether the adjustments are justified, which is difficult.

My last article was on Design Group, a company that reported a very modest profit in 2020, and a much higher company adjusted profit. Once bitten, twice shy. I put a day’s research on Animalcare to one side, and turned to SharePad to find something simpler.

My ‘Adjusted versus reported’ profit filter ranked by ‘Reported operating profit as a % of company adjusted profit’. I scanned the list for companies where there was a small discrepancy that had published annual reports in the last few months. The filter was created in the usual way, and I added two columns to the table to show the company’s year-end and the date it published its annual report.

James Cropper was not a perfect 100%, reported profit was just under 91% of company adjusted profit, but it has other things going for it.

The company is also upfront about adjustments. Chief financial officer Isabelle Maddock devotes much of the first page of her report to the adjustment of pension charges to calculate Alternative Performance Measures (APMs), which are all measures of adjusted profit. The reported charges are derived by applying International Accounting Standard (IAS) 19: 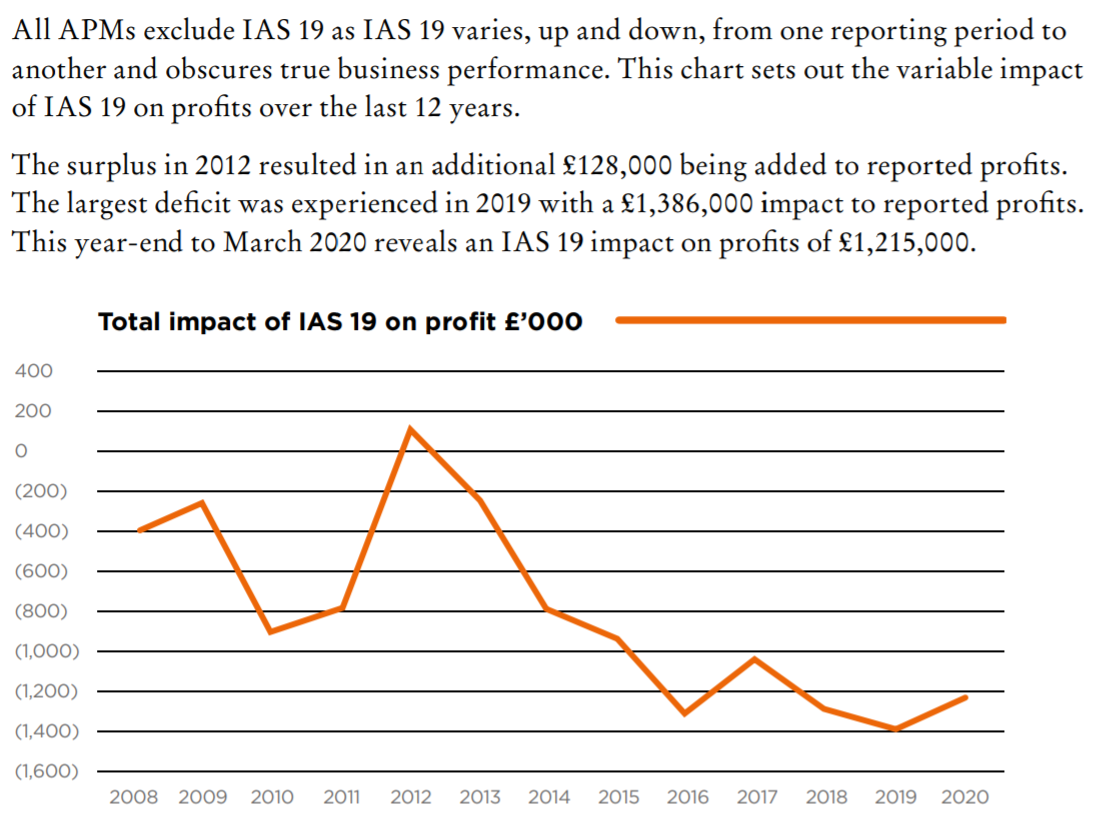 The additional cost of the IAS 19 accounted pension charge over the cash cost. The company adds this back to profit. Source: Annual Report 2020

“The adjustment, which we refer to in these accounts as the “IAS 19 impact” represents the difference between the pension charge as calculated under IAS 19 and the cash contributions for the current service cost only… The Directors consider that the adjusted pension charge better reflects the actual pension costs for ongoing service compared to the IAS 19 charge.”

While this adjustment is unusual in my experience, it may be reasonable. Pension accounting is based on so many assumptions it would not surprise me if the cash cost was a better way of counting the expense.

Furthermore this is the only cost James Cropper routinely ignores in its adjusted figures. In recent years, reported profit has typically been about 90% of adjusted profit:

I am also a sucker for managers who say it how it is and show a bit of spirit and I sensed this in chairman Mark Cropper who wrote in the annual report:

“In the days following lockdown two simple questions were foremost in my mind: do we truly realise how serious this is, and will we survive? These are answered: yes and yes.”

“Looking beyond the here and now, I believe there are now two additional questions to ask: can we grow our way out of the current economic environment and can we do so in a way that respects our environment, people and communities like never before? I would again answer yes and yes.”

Maybe it is bravado, but having worked out what the business does, I think there is substance behind the words…

Not just about paper

The smallest division is also the newest, ColourformTM. It makes 100% recyclable shaped packaging from paper. The newish division grew revenue 800% from a low base in 2020, but has yet to make a profit.

The jewel in the crown though is not wood fibre but technical fibres. Despite its modern sounding name even this division has a history. It was founded in 1986, when research into non-cellulose fibres offered James Cropper the opportunity to diversify.

Technical fibres are made from a wide variety of materials including carbon, glass, polyester, aramid (a synthetic fibre) and thermoplastics. They are supplied in extremely thin and light veils and incorporated into composite materials making them easier to manufacture and enhancing them in many ways.

These properties are prized in diverse industries. Often, the company says, it has little direct competition. 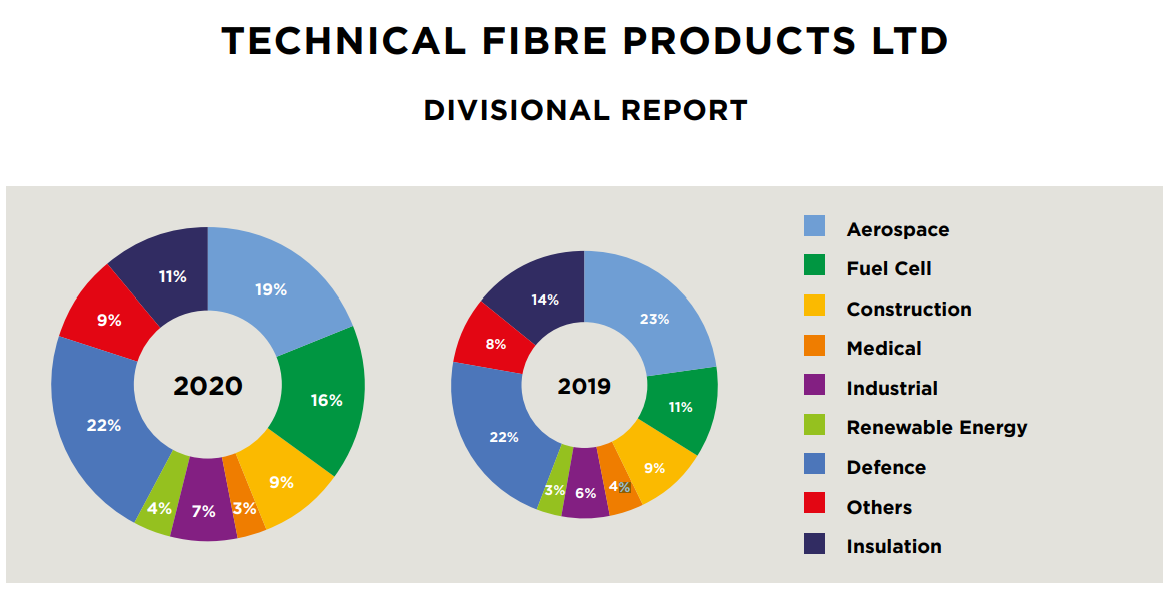 Perhaps I am being pedantic, but I think these pie charts showing TFP sales are misleading. While the company may wish to put emphasis on the year of the report, 2020, TFP earned similar turnover than it did the previous year so for the sake of comparison the 2019 pie chart ought to be a similar size. Nevertheless, the pie charts do show TFP supplies diverse industries. Source: James Cropper, 2020 annual report.

TFP’s biggest market is aerospace (19% of TFP revenue). The company boasts that its materials are found in most airframes but aerospace is not the place to be at the moment. The pandemic has stymied international travel and airlines are no longer queuing up for new planes.

The second biggest market is fuel cells. TFP manufactures carbon fibre veils that are used in all fuel cells, a market often touted as the next big thing in transport and one in which TFP claims a significant market share. Sales grew 40% to 16% of TFP revenue in 2020, but even so fuel cells were not TFP’s fastest growing market.

That honour goes to renewable energy, where sales grew 60% to a modest 4% of TFP revenue, due, the company says to the launch of new materials which provide a tough surface finish to turbine blades and shield the nacelles from EMI. Nacelles are housings containing the generators and other equipment.

On the brink of commissioning a new factory in 2020 to increase capacity, TFP paused all capital expenditure, but it expects to resume work on it in December.

Though James Cropper Paper is the company’s biggest revenue earner, the division does not earn the most profit. Indeed it made a loss in 2019.

The superior growth of TFP has been evident for some time: 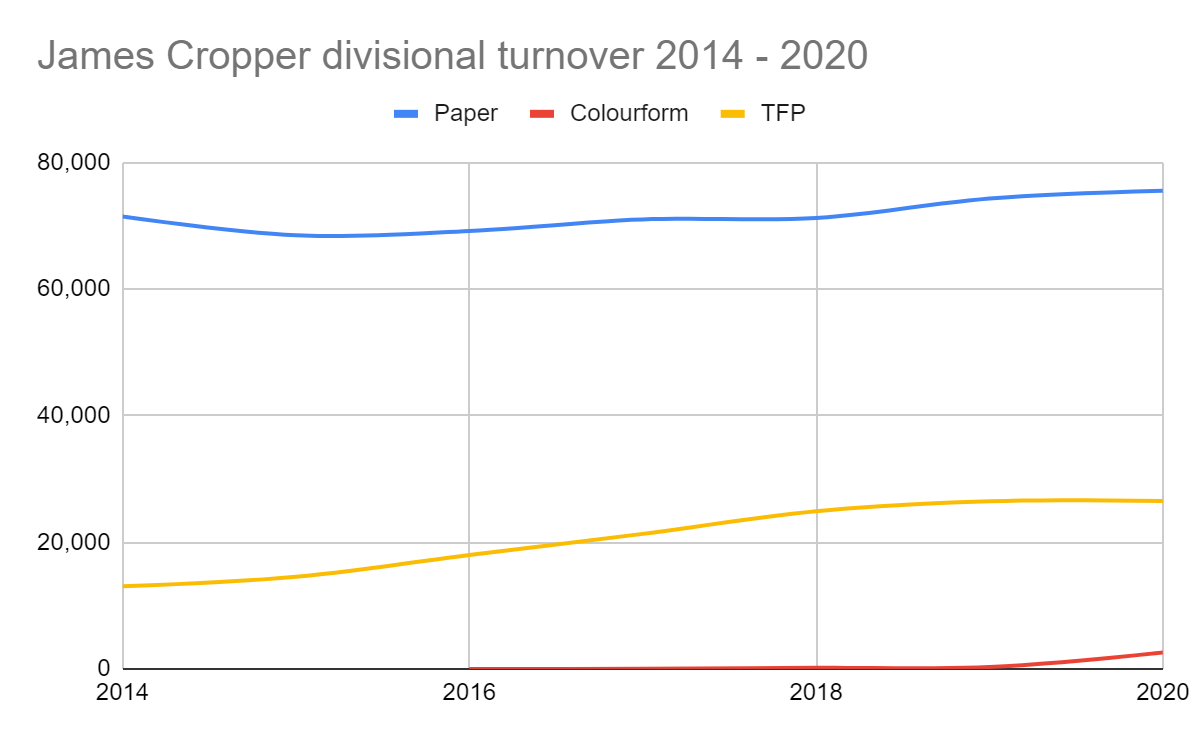 Although it is not easy to see on this scale turnover at TFP has doubled over the last six years, while turnover at James Cropper Paper has hardly increased. Turnover at ColourformTM is not yet significant. Sources: Annual Reports 2015 to 2020.

Superior profit has been even more evident. It has grown by a factor greater than six to far outshine paper: 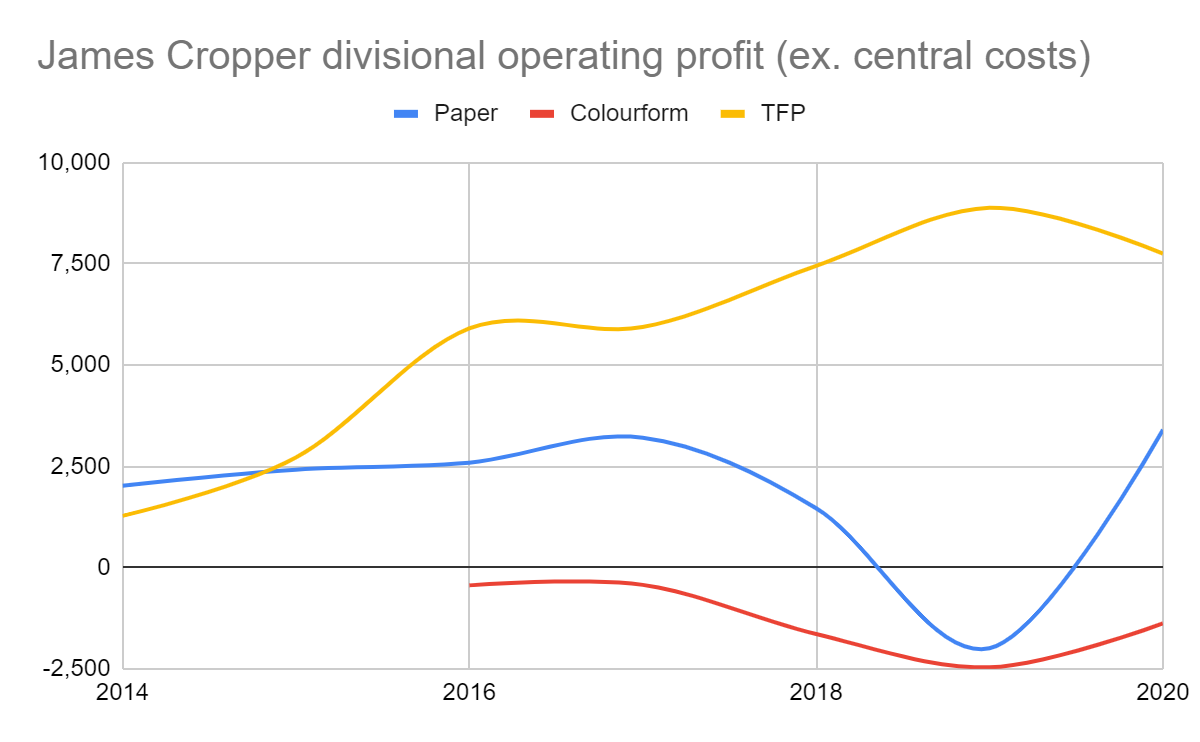 The impressive profit at TFP is the result of a very high profit margin: 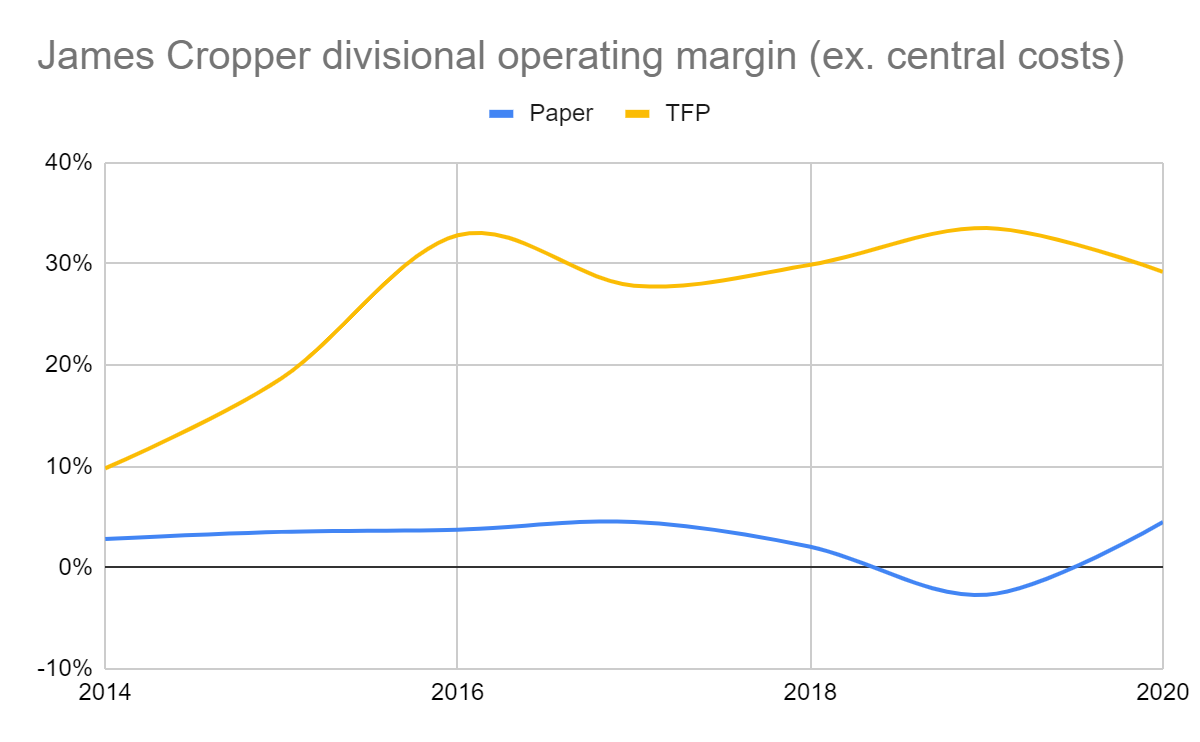 ColourformTM is excluded from this chart because it has yet to make a profit. Sources: Annual Reports 2015 to 2020.

The paper business and recently ColourformTM have been a drag on the company’s unexceptional Return on Capital Employed (ROCE) and Profit (EBIT) margin: 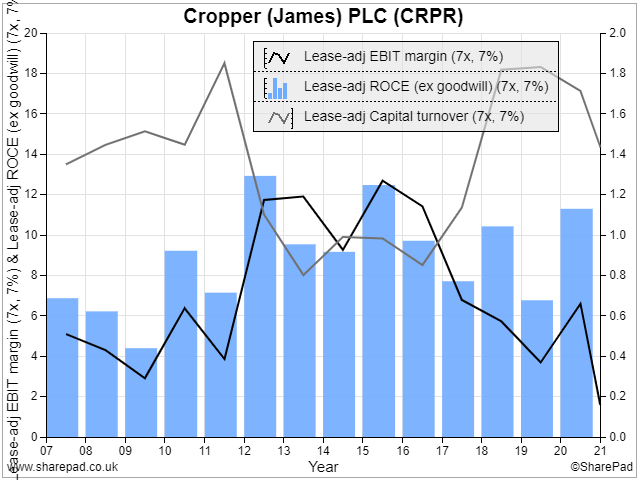 Anyone looking at the profitability of the group might have missed it, but hidden within is what appears to be a genuine growth business in TPF and, speculatively, another in ColourformTM.

James Cropper bore the brunt of the lockdown in the current financial year. It made a loss in the first quarter and expectations are low for the year to March 2021. The company says the group should break-even “at least” and analysts are parotting that prediction:

The outlook for TFP is uncertain due to the contraction in aerospace but it expects continued growth in fuel cells and renewables. ColourformTM should grow, but the company has not said it will make its first profit.

James Cropper Paper has been derailed by the pandemic, though, and the company is restructuring. That such an established business should decline is regrettable but perhaps inevitable.

But as far as shareholders are concerned the more James Cropper looks like high-margin, high growth TFP and the less it looks like the low-margin and contracting paper business, the better.