Investing alongside managers with skin in the game

Richard uses SharePad to find companies whose managers are also significant shareholders. They are likely to be building businesses for the long-term, he says.

The reasons for investors to look kindly on owner-managers, executives that have large shareholdings in the firms they run, are ably described in this article by Harry Fraser, manager of the Overstone UCITS Global Smaller Companies Fund. Owner-managers, he says:

The prima facie evidence that managers with skin in the game run companies that make better investments, is this chart, showing the performance of large US companies still run by their founders: 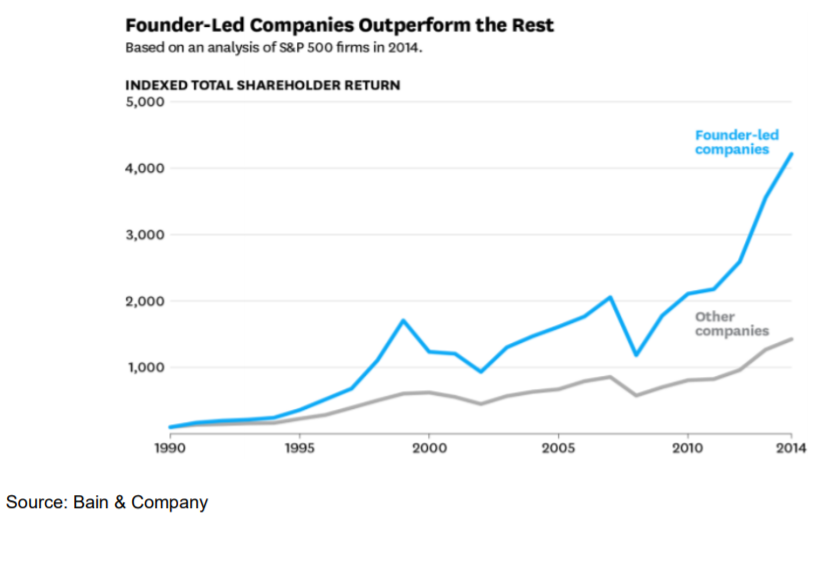 The studies the author quotes, and the conclusions he draws, accord with my own experience and other studies, for example European family-owned businesses have been shown to perform better than average.

The only fly in the ointment, is the performance of the Global Smaller Companies fund itself. The article was published two years ago when a founder was involved in half of the companies the fund owned. At nearly three quarters of the fund’s holdings, managers owned more than 5% of the shares in the company they ran. Even so, the fund has not beaten the index it chose to compare itself to over 1, 3, 5, or 7 years, which is disappointing to say the least! I cannot comment on why that might be, as I do not know what else has influenced the fund’s investment choices, but it is a lesson that no strategy is bulletproof. I think, though, we can do better.

Finding owner-managers is easy in SharePad. Two key factors are Dir Holdings %, and Dir Holdings 3m change %. They do what they say on the tin: Show what percentage of the shares in a company are owned by directors at the same company, and by how much that figure has gone up or down compared to three months previously. You can filter for particular levels of director holdings or, as I have done in the example below, create a table showing these factors, and apply it to a list or filtered list of shares. Here it is applied it to my Keep it Simple filter, which produces a list of profitable, established firms with only modest levels of debt in industries I approve of and feel competent to analyse: 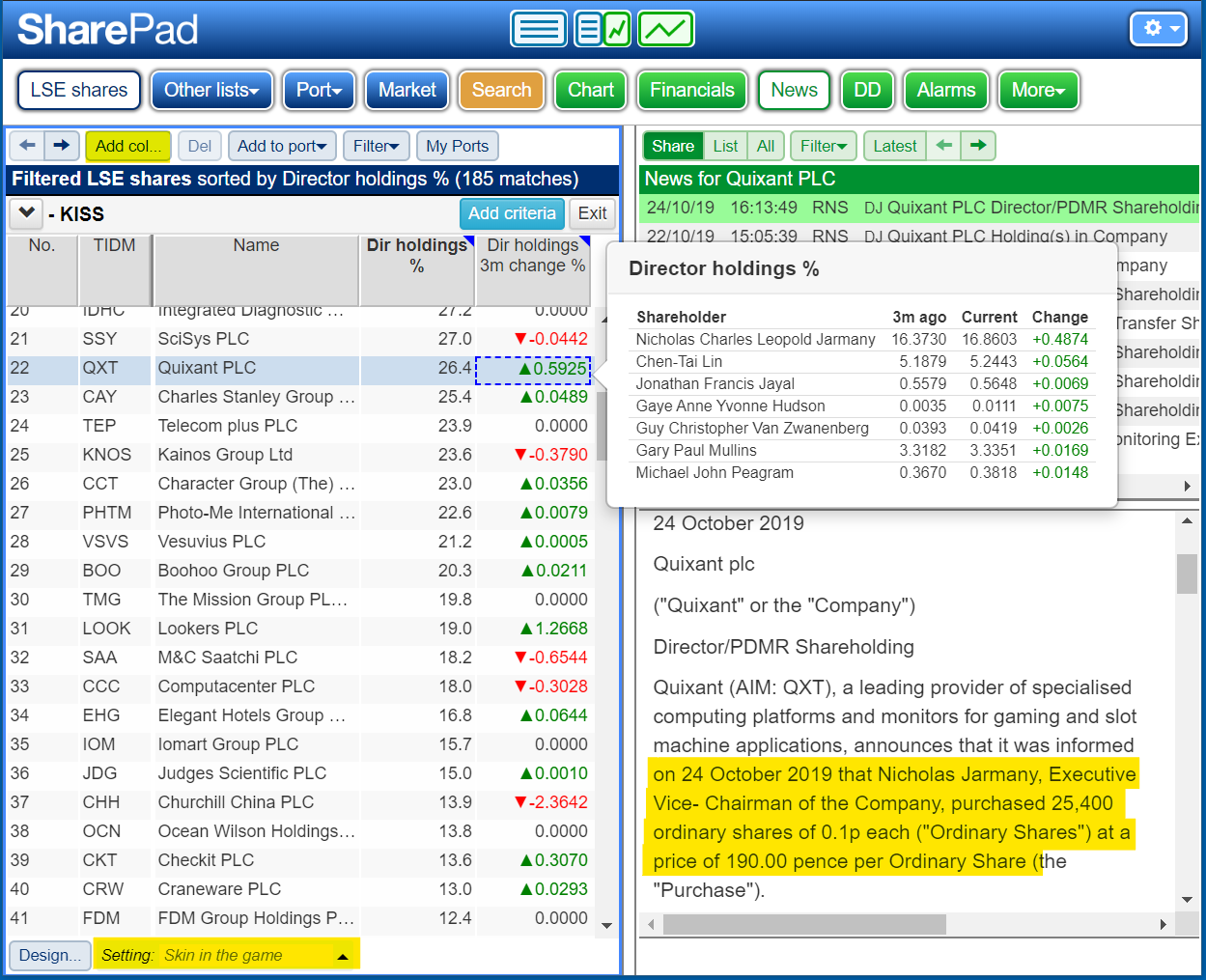 On the left you can see some of the 185 matches returned by the filter. To display the directors’ holdings, I created a new setting (Click the triangle next to Setting at the bottom of the list, and then Create new…) and then added the Directors’ holdings columns (Click Add col in the menu at the top of the list).

One word of warning interpreting this data. Directors’ holdings as a percentage of the total number of shares in a company can change for a number reasons: The Director might have bought or sold shares. She might have been given shares as part of her remuneration. Or she might own the same number of shares but the total number of shares in the company has increased because it has issued more, or decreased because it has bought back shares. In the last three months, any combination of these things could have happened.

We can find out more by clicking on the dir holdings % or Dir Holdings 3m change % figure for any company, which triggers a pop-up containing the individual directors’ holdings and how they have changed. Most of the increase in Directors’ holdings at Quixant over the last three months, for example, were due to an increase in the holdings of Nicholas Jarmany who owns nearly 17% of the company. The News section of SharePad tells us this was, perhaps, a significant purchase by the executive vice chairman. He bought 25,400 shares at a price of 190p, which is an investment of just over £48,000. I do not know anything about Quixant, but it may be a good sign. Often a substantial purchase can be interpreted as a show of confidence.

Sales can be more difficult to interpret as the manager might need the money to buy a house or settle a divorce for example, reasons that have nothing to do with the prospects of the business that I have been given in the past.

The list includes shares I already own, partly because I admire the management. Certainly that is true at Renishaw, where founders David McMurty and John Deer own 53% of a business that has been investing heavily for decades in metrology (measurement). The machine tools it manufactures are at the forefront of manufacturing automation.

The same is true of FW Thorpe, where brothers Andrew and Ian Thorpe own 46% of the shares. Andrew recently retired as an executive and joined Ian as a non-executive director but he guided the company through a period of heavy investment while maintaining high levels of profitability as its industry, lighting, switched to LED technology. His successors are steeped in long-service and the company’s culture.

Quartix, which designs and sells vehicle tracking systems directly, is 37% owned by its founder Andy Walters. There is little doubt in my mind he has created a unique business focused on selling a generic low cost device into a large market of small business owners.

It feels like I mention Dart, owner of airline Jet2.com and Jet2holidays, a package tour operator, in almost every article I write. Its founder, former stunt pilot Philip Meeson, owns 37% of the business. Dart has also been a big investor opening up new routes and buying new planes as its low cost and consequently highly profitable package tour operation has grown from a standing start.

Judges Scientific was founded by David Cicurel, who owns nearly 12% of the shares. It has grown through the acquisition of small scientific instrument manufacturers. Key to its success has been Cicurel’s reputation as an honest buyer and his deal-making discipline, never overpaying and always paying back the money borrowed to fund one acquisition before making another.

All of these companies except Renishaw fit inside an ownership sweetspot, between 5% and 50% of the total number of shares are owned by the managers. The lower bound is arbitrary. All that really matters is that the managers own shares worth a multiple of the value of their annual pay and bonuses (at least say five or ten times) so the directors are more interested in growing the value of the business than making a quick buck.

That’s not to say companies where directors own most of the shares always make bad investments. Minority shareholders have prospered alongside the Murray family in Andrews Sykes and London Security for decades. According to SharePad, executives at London Security own just under 99% of the shares. I am just not comfortable putting my hard earned wonga so firmly in another’s hands. There’s no need. Although these are demonstrably good businesses, there are plenty more out there.

Neither is it to say companies whose directors own substantial shareholdings are always good investments. Sometimes they use their voting power to further their own interests, and sometimes they cling on to power long after it seems obvious they do not have the solutions to their business’ failings. No doubt there are some shareholders that feel this way in French Connection, where founder, chairman and chief executive Stephen Marks owns more than 41% of the company. It is not in my list though, as cash has poured out of the business over the last five years.

Next time I will examine an owner-managed business in the hope that it will make a good long-term investment.