The old ones are the good ones

Exciting news: Aston Martin is readying itself to float on the stock market. Investors should think twice though, before buying the shares. Typically, it is the most seasoned firms that make the best investments. This is how you can find them.

The Aston Martin story has many of the hallmarks of a big flotation. The company, hitherto loss making, is back in profit. It plans to increase production dramatically on the back of new models, extend the brand into luxury goods, and revive Lagonda as an all electric luxury vehicle. The mooted valuation is a heady £5bn. The Aston Martin of the next century will, we are told, be nothing like the Aston Martin of the last century, which is a good thing because it went bust seven times. In short, we are being sold a vision of jam tomorrow.

It may be a good vision, but if it is, stock market success will be in defiance of the statistics.

Elroy Dimson, Paul Marsh and Mike Staunton, all professors at the London Business School, measured the returns of UK shares between 1980 and 2014 to determine the effect of “seasoning”—how long it had been since a firm floated—on subsequent returns. 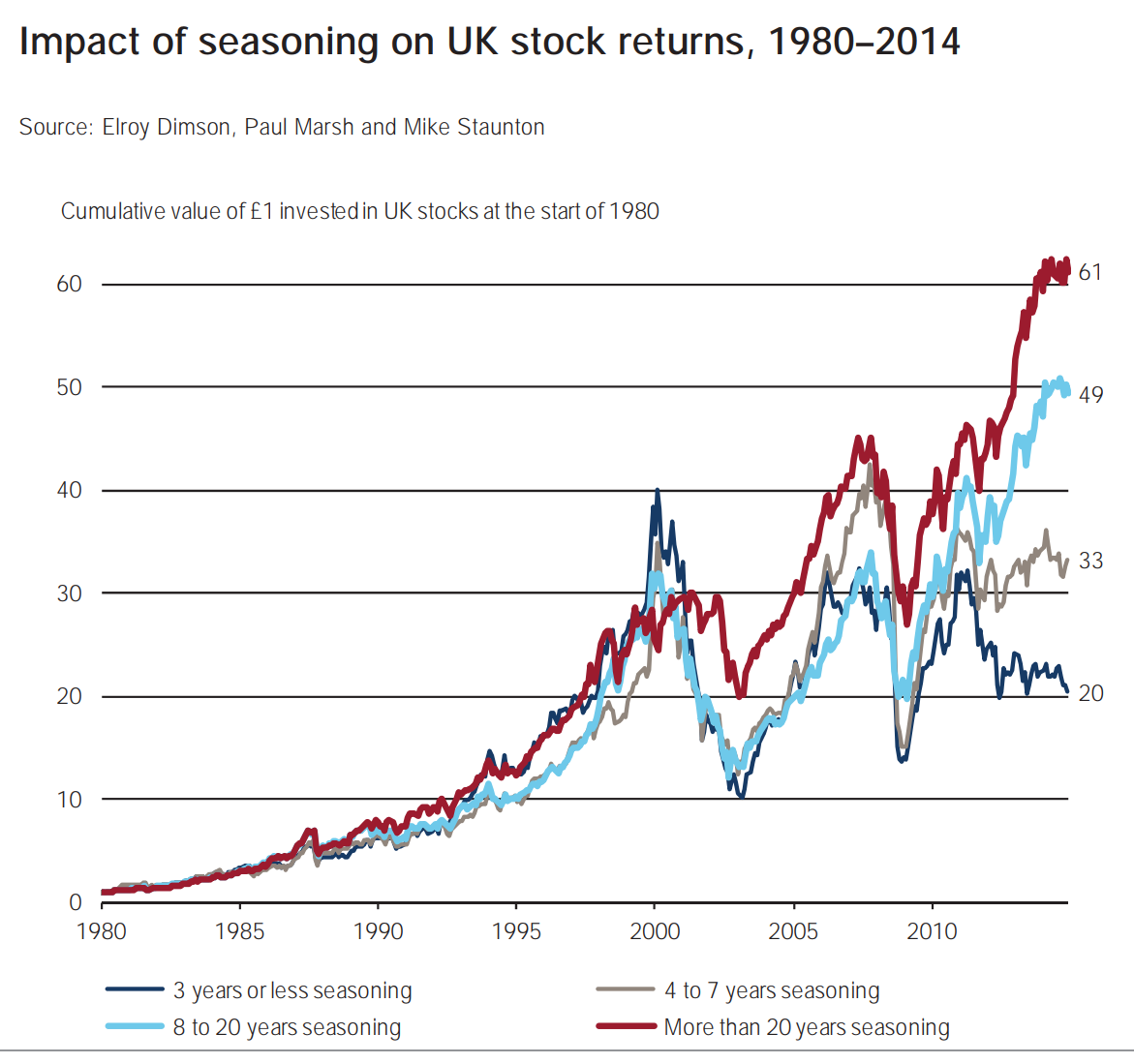 It seems investors pay too much for shiny new shares and undervalue the longest established stock market firms most of all or as Dimson and his colleagues put it: “At the stock level, old clearly beats new”.

Float date is not available as a filter criterion in SharePad but we can add it as a column in a table and sort the list to show the most seasoned firms at the top. Here I have copied the ‘Base filter’ I described in my last article, named it ‘Base filter + seasoning’, added the Float date column to the table, and applied the filter to all of the shares listed on the London Stock Exchange.

By double clicking Float date we can see the most established companies. There are some well seasoned names in the list: 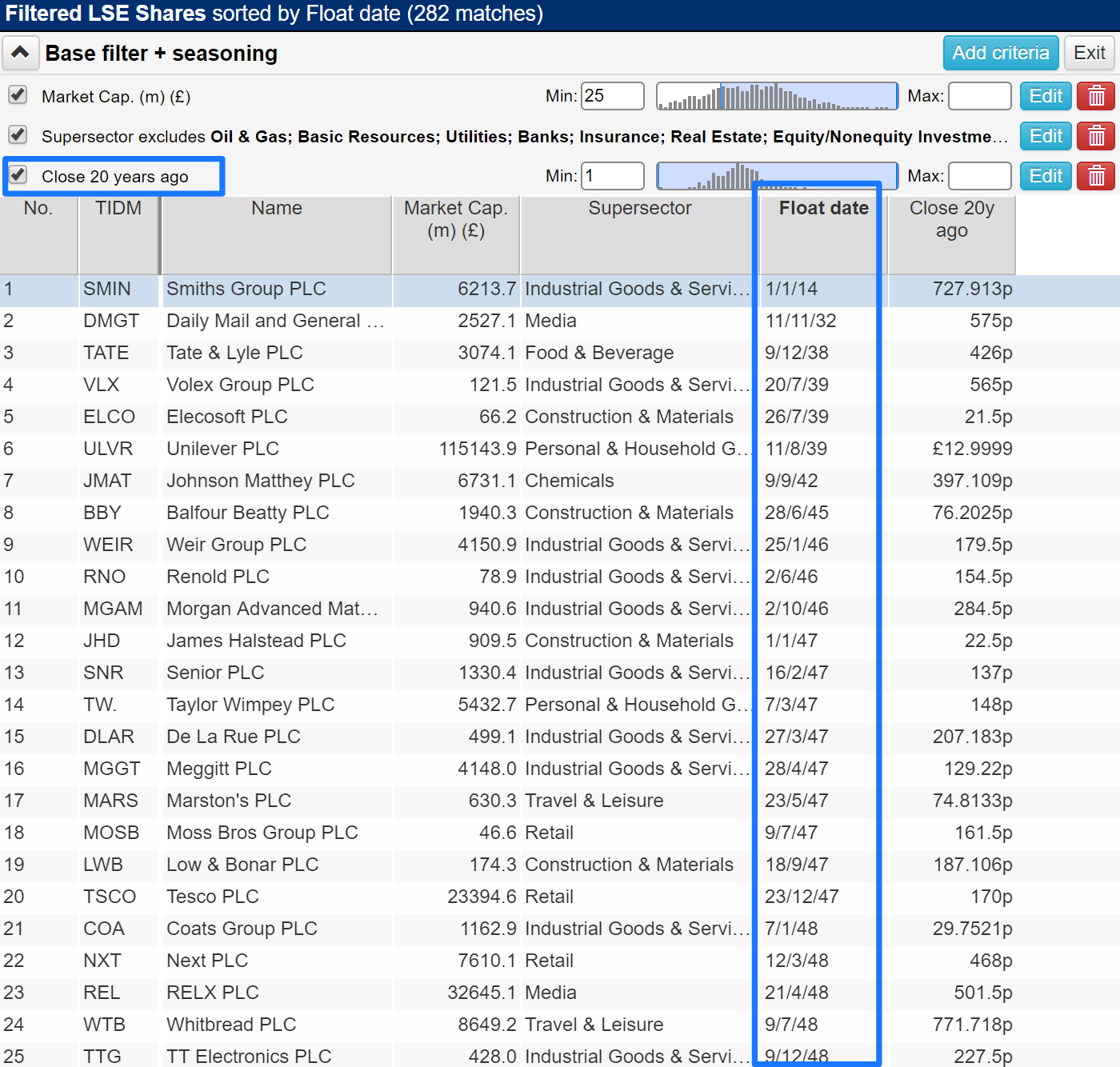 As I glance down it, I am thinking about how to narrow the field down to the shares most likely to suit my long-term temperament, shares that I can see myself holding for ten years or more. We could add more filters, for example adding the criterion by Price on date, 20 years ago and setting the minimum to 1p we can exclude all shares that listed in the last twenty years to bring the number of companies returned by the filter down from 886 to 282. Or, as I often prefer to, we could dive in and consider each company in turn.

Usually it doesn’t take very long. These were my thoughts as I moved down the list looking for a well seasoned idea I might invest in…

I passed on Smiths Group. Its £6bn market capitalisation means it is a big company. Often big firms are complicated and hard to analyse and this may be true of Smiths. SharePad’s Activity Breakdown and Summary sections tell us the group is split across five divisions: mechanical seals, medical supplies, weapons detection, electrical connection and specialised hoses. These businesses may have great potential, but I have to do five times the work if I am to understand each one. Verdict: Probably too difficult.

I also threw out Daily Mail and General Trust because it is big and diversified, and I don’t like the flagship division: the newspaper. You may well ask why this very personal prejudice is relevant. As investors we are supposed to be dispassionate; what matters is whether the Daily Mail will prosper, not my personal views on the wholesomeness of the product. As a commentator, though, I feel I must be honest about my biases, and I disagree with the cold calculating caricature of investors. For me, there’s no joy in profiting from businesses I do not want to succeed. Verdict: Not interested.

We’ve all heard of Tate & Lyle. It is a £3bn company synonymous with sugar. Here’s another prejudice of mine: sugar – I think there’s too much of it in our food. But here’s a reason to be careful about pandering to our prejudices: Tate & Lyle’s Activity Breakdown and Summary sections in SharePad do not mention sugar. Its segments are Bulk Ingredients and Speciality Food Ingredients. The absence of sugar specifically has triggered a latent memory, confirmed by a Google search. Tate & Lyle sold off its sugar refineries in 2010. You can still buy Tate & Lyle sugar but the refineries and brand name are now owned by a company called ASR. I do not yet know if Tate & Lyle is a better business, but even if it is not, I am interested in learning more about the industry because I own shares in a much smaller and more specialised ingredients company: Treatt.

Switching to the Summary tab of the Financials view in SharePad we can quickly get a feel for what kind of business Tate & Lyle is at the moment. The screenshot below won’t look exactly like yours because I have changed some of the ratios to ones I prefer, however it mostly contains SharePad’s defaults: 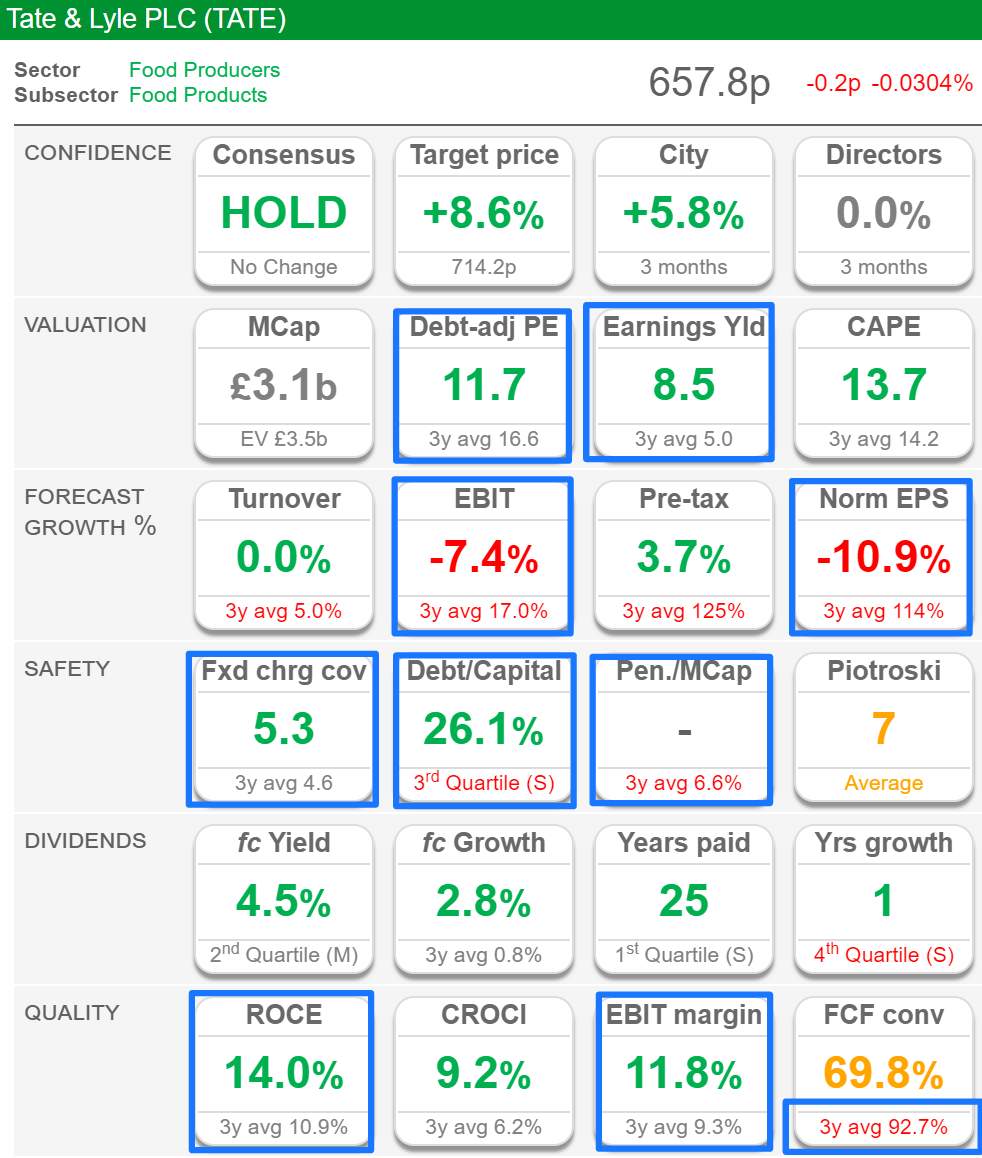 The summary dashboard is subdivided. I put the most store in the metrics in the Quality category. It is difficult to imagine being invested for ten years in an unprofitable business. Tate & Lyle is profitable, although I would need to investigate why it was less profitable in the recent past judging by the three year average, and look a bit further back.

Safety is also important. There doesn’t seem to be much reason to worry about Tate & Lyle’s finances, it can pay its interest and lease payments more than five times over, it is only 25% financed by bank borrowings, and it doesn’t have a pension deficit.

Tate & Lyle is modestly valued too, at less than 12 times earnings. We can convert the price earnings multiple into a shareholder’s yield – how much the company could return to shareholders it were to pay out all its earnings – by dividing the PE ratio into one and expressing the fraction as a percentage. The earnings yield is 8.5%, which is quite an attractive return.

Tate & Lyle is not paying out all it earns. The dividend yield is 4.5%. Broadly speaking it must either be reducing its borrowings, investing the earnings it has retained to grow profit in the future, or returning cash to shareholders by buying back shares.

It is only when we get to the forecast growth category that we start to see obvious bogies. City analysts say revenue will be flat, and profit will fall by two of the three measures in the current financial year.

How we respond to this information depends on what kind of investor we are. I put more weight on what we know about a business than projections of the future, partly because companies often surprise us (not necessarily in a good way), and partly because forecasts do not extend very far into the future.

SharePad shows the averages of 14 broker forecasts in the Forecasts tab. These suggest growth will resume modestly in 2020 and 2021. Since I am concerned with Tate & Lyle’s long-term performance, I do not take much notice of these forecasts, I would be wary if brokers were forecasting big declines.

So where do we stand now? In Tate & Lyle we have an idea, a potentially good business on an undemanding valuation, perhaps because traders don’t think it will do much over the next few years. It is probably worth investigating, especially as SharePad tells me Tate & Lyle has published an annual report relatively recently. (Verdict: Candidate.)

In my next article I’ll flip the filter and augment it. I’ll be trying to find the exceptions that prove the rule: new issues that make good investments.