When bad news is good news

Richard investigates Vitec, which has reported some bad news in 2019. It could be an opportunity to buy shares in a high quality business at a low valuation.

I don’t always follow up on reader suggestions, sometimes people recommend companies so repugnant it’s difficult to believe they have ever read a line of mine. But I also get emails that hit the sweet spot, like this one, which I have shorn of salutations:

I was wondering if you know a company called Vitec Plc. I have never seen you talk about it and it is a UK-based company with high-quality characteristics (high relative market share in a niche market with good long-term outlook that it is considerably protected from disruption, strong brand recognition, very good returns, relatively prudent debt levels…) and a current fair price.

I can’t explain why, it’s been listed longer than I have been investing, but I don’t know Vitec, which is rather brilliant. There is nothing in investing quite like investigating a company for the first time, although we have to be careful not to be carried away by our first impressions.

Vitec makes camera equipment for broadcasters, videographers, photographers, and yes, the new category of “smartphonographers”. To my eye, unaccustomed as it is to most of this kit, that means pretty much everything but the camera.

A history of good returns 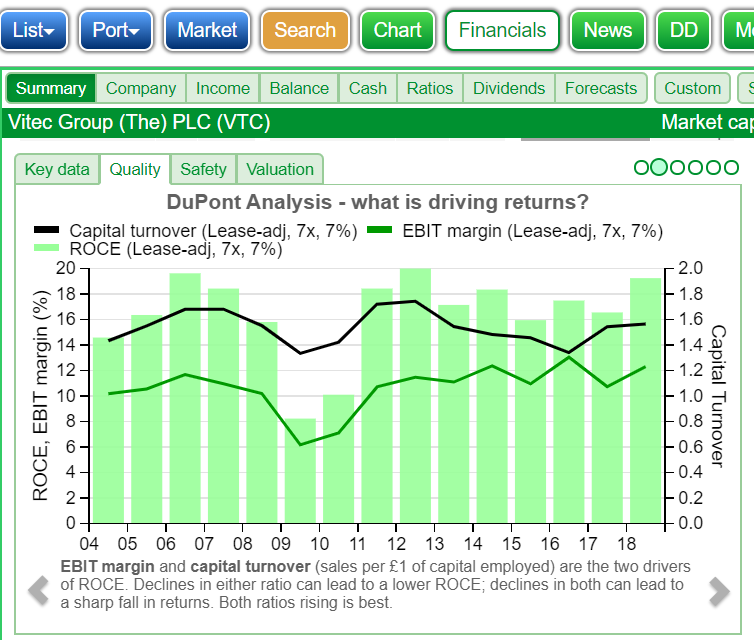 The vital statistics are decent. I like my holdings to be capable of earning a Return on Capital Employed of 15% or more most years, and more than 10% in the worst years. Vitec only tested these limits in the depths of the Great Financial Crisis when it earned a still viable 8% ROCE. It’s a similar story with profit margins, which have routinely exceeded 10% except for minor transgressions during the financial crisis. I’d like to explain why investors seek high returns and how profit margins and capital turnover determine them, but Phil Oakley’s already done it and I have lots more to say about Vitec…

Vitec’s stats aren’t far above my baselines, but that’s probably because SharePad’s default measure of ROCE is closer to the worst case than the best case when judging acquisitive companies. This has to do with the way companies must account for goodwill and acquired intangible assets like brands and customers when they buy other businesses, which is different from how they account for the same home-grown intangible assets. To put things on a more even footing, companies and analysts tend to adjust the figures, which inflates the profitability of acquisitive companies, legitimately in my opinion.

The accounting is tricky, but for today I would like to leave you with two takeaways: Vitec may be even more profitable than the accounting makes it look, and if you are feeling adventurous, you can demonstrate this by creating your own version of the chart above using SharePad’s financial charting to exclude goodwill, one of the adjustments analysts often make, from ROCE: 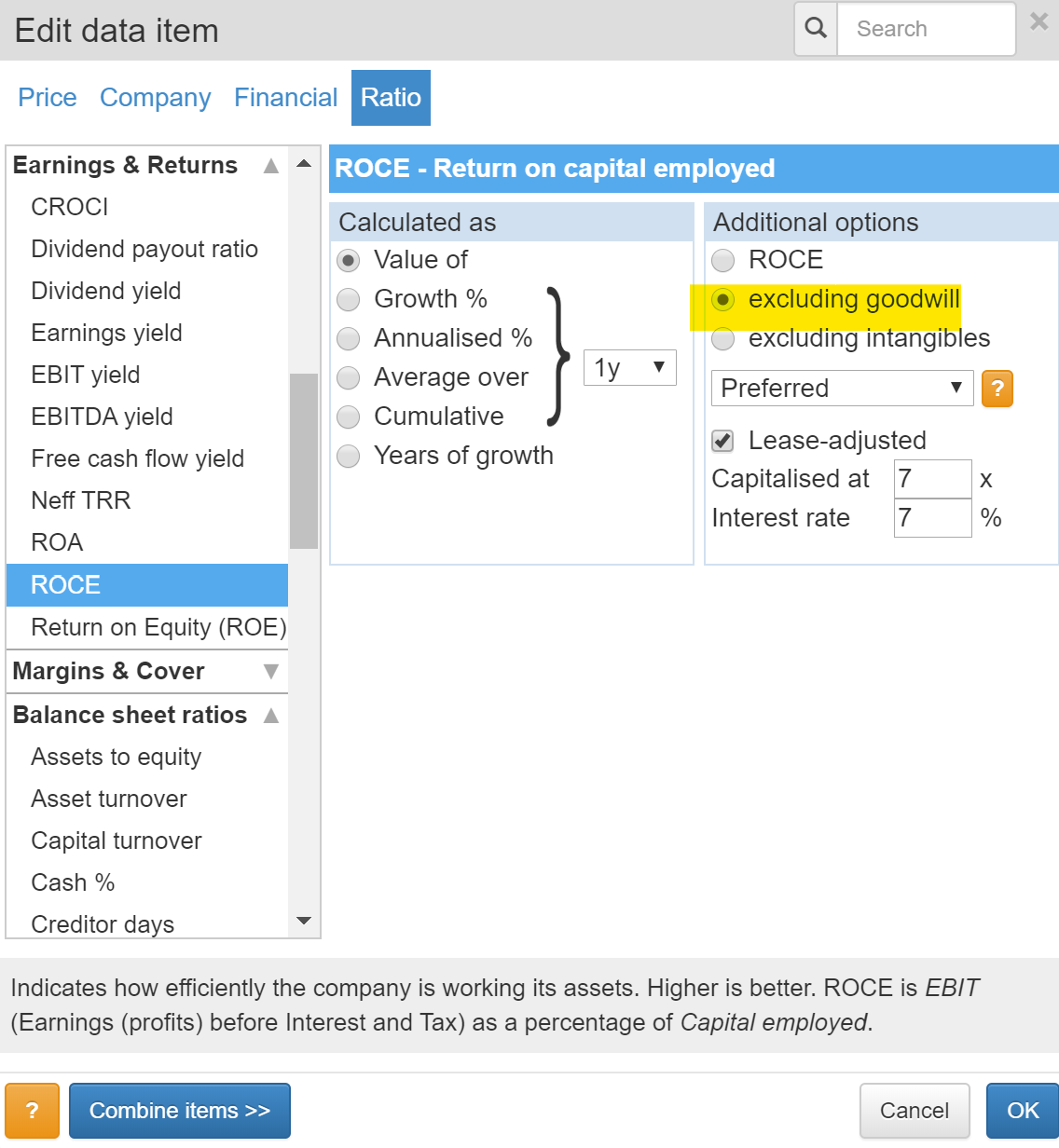 As you can see from the resulting chart, calculated this way ROCE has routinely been 20% or more since the financial crisis: 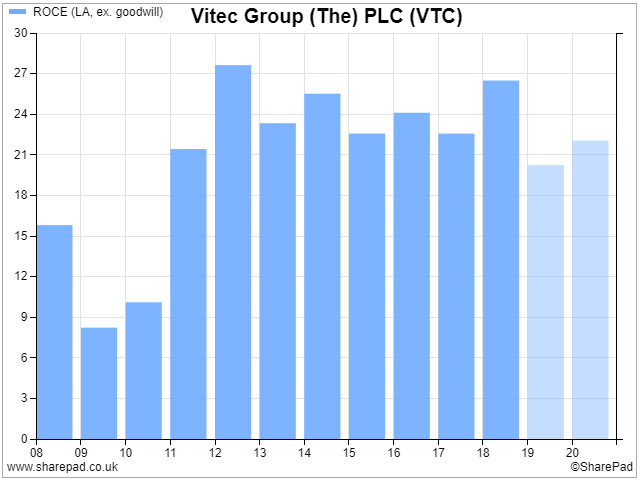 But how did I know Vitec is acquisitive? This hard-won information came from page on its website listing many acquisitions and a second financial chart showing how much Vitec has spent on them: 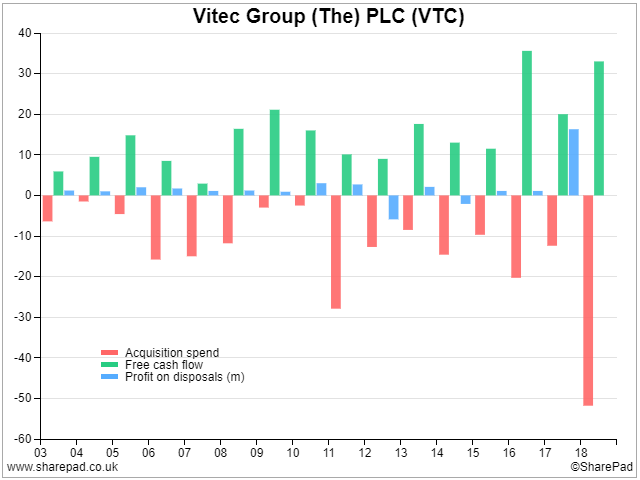 The chart shows money spent on acquisitions (negative, pink bars) and how much Vitec earned in terms of free cash flow and disposals (positive green bars and mostly positive blue bars). Vitec made a small acquisition in 2019, too, which will pop into view once it has published its results.

I haven’t done the maths, but just by eye you can tell Vitec spends most of, if not more than, what it earns on acquisitions, and in 2018 it really splurged. Since free cash flow must also fund the dividend, we can say with some confidence it has been a big spender. There is evidence of restraint though in Vitec’s share count, which has increased only slightly each year, probably to fund share option schemes rather than acquire businesses Vitec cannot afford from its own cash and borrowing facilities.

I should add, the fact that free cash flow has always been positive is another sign the company is a decent business.

When bad news is good news

Vitec hasn’t reported results for 2019 because its financial year coincides with the calendar year so it has only just ended. SharePad tells us the preliminary results are scheduled for 21 February and the annual report should be published on 20 March. 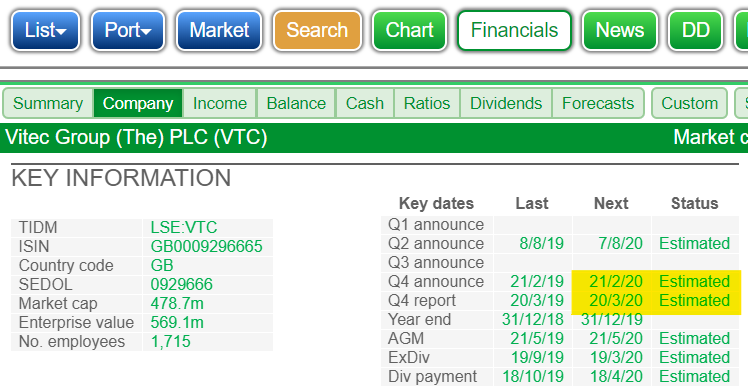 Since the latest annual report is nearly a year old, we need to find out what’s happened since December 2018, to construct an impression of what might be coming.

The latest significant item in SharePad’s Vitec newsfeed is a trading update from the 28 November 2019. Fortunately, Vitec is forthcoming, which is a good sign. Unfortunately the news is mixed. The company says its performance will be undermined by two “one off” events:

Because Vitec’s insurer compensated it for lost profit as a result of the fire, much of the impact was mitigated in 2019, but Vitec estimates delays to the launch of new products will cost it £5m in lost operating profit in the new financial year (2020).

It looks like Vitec’s results in 2019 and perhaps 2020 will be disappointing, but not disastrous. Having spent so much on acquisitions in 2018, the combination of lower profit and weaker cash conversion will reduce the company’s ability to lower borrowing and buy more businesses, which may explain why it eased up on acquisitions in 2019. Borrowing levels are not dangerously high though. SharePad reports Vitec can afford its interest bill 15 times over.

I’m slightly wary of businesses that experience destocking though, because I have learned the hard way it can become a nauseating pattern. Destocking occurs after retailers have ordered more stock than they need from a supplier, either because they have been wrong-footed by demand or, more nefariously, because the supplier offered them heavy incentives to buy too much. Since the retailers have excess stock, they will not order more until they have got rid of it leading to a contraction in the supplier’s turnover. If the supplier is a manufacturer like Vitec, manufacturing volumes will decline. Factories operate less efficiently on lower volumes and profit often contracts even more turnover.

Destocking should be a temporary problem, but this has not been my experience at two companies I am better acquainted with: Haynes Publishing, the motor manual publisher, and Portmeirion, which makes tableware. For many years, Haynes was locked in a cycle of destocking and restocking that made it hard to determine whether the company was growing or contracting and Portmeirion is currently in a similar cycle (you can read all about it here).

Portmeirion is a bit of a special case, but one reason these companies’ retailers are selling less than expected is increasing competition online. This impacted Haynes before it diversified and went online itself. One of the developments Vitec mentions in its trading update is that the afflicted division is successfully adapting “to an e-commerce business model”.

There will be many reasons apart from destocking, but one way or another Vitec’s growth has been uneven: 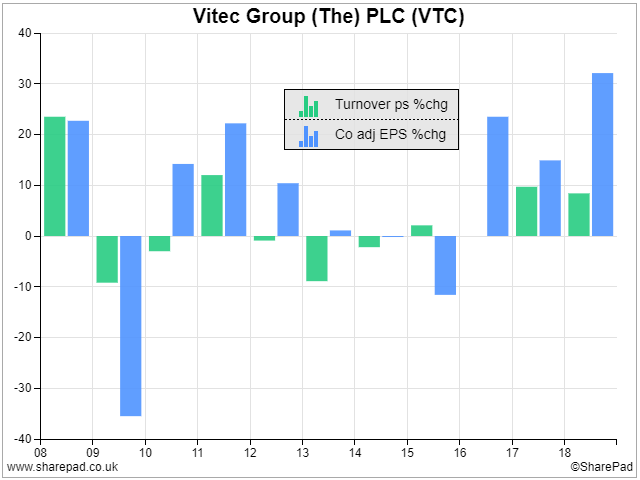 To calm my fevered mind, I used the advanced search of the free Adobe Reader program to search electronic copies of Vitec’s annual reports back to 2008 (you can do it in bulk) for instances of the word “destocking” and variants of it. I found none. That’s not conclusive, but it may be a sign the company is not abusing the term “one-off” when it applies it to the current situation.

I think Vitec may well be a good quality business, and it’s trading at a pretty low valuation. Very few of the many good businesses I am already acquainted with currently trade on a debt adjusted PE ratio of 13:

Believe it or not I have been helped to make that judgement by Vitec’s use of the word “adapting” in its trading update. For good businesses to remain good, they must adapt. Not only has Vitec given me another word to add to the lexicon that powers my Companies that speak my language filter (see this article for the rest of the list), but, oh joy, I have discovered that in other ways Vitec speaks my language:

This, for example, is from the half year results last August:

It takes me a while to get to know companies, but my first brush with Vitec is encouraging. I will read the 2019 annual report in March and probably dig deeper.