In response to a reader’s suggestion, Richard investigates Alpha FX. It is exactly the kind of people-first business that could be building a long-term competitive advantage and consequently grow inexorably.

As I was considering what to write about for my last article before the Christmas break, a present from a reader arrived in my inbox. He wrote:

Your latest piece was very interesting… one share that fits the bill for me as an example of a business built on a strong culture and CEO is Alpha FX. It’s one of only two shares that I have ever bought at IPO and that was driven by the thought that the CEO, Morgan Tilbrook, could be a very rewarding entrepreneurial chap to follow as well as being the right age to help keep me in comfort into my dotage!

My correspondent, let’s call him John, was referring to an article on companies with people-first cultures. The premise was that people are the ultimate competitive advantage because we create unique products or services, brands, intellectual property, relationships with customers, suppliers and so on – the things investors normally think about when they try and determine what makes a company special. People-first companies are perpetual recruitment machines, recruiting and promoting the best people to strengthen old advantages and build new ones.

While I found interesting companies willingly explaining their cultures at some length, I felt I had missed lots more. Alpha FX was one of the companies my search evaded. John wrote:

…[Alpha FX] would be an interesting one to check to see what other search terms might have caught it – or maybe it does qualify if you relax your [word] list beyond your current filter?

As it happens, I have just the tool to throw at Alpha FX, a SharePad news filter I call “Companies that speak my language”. It includes all the search words I associate with firms trying to build long-term competitive advantages.

Companies that speak my language

The filter is a collection of words and phrases I have built up over time: 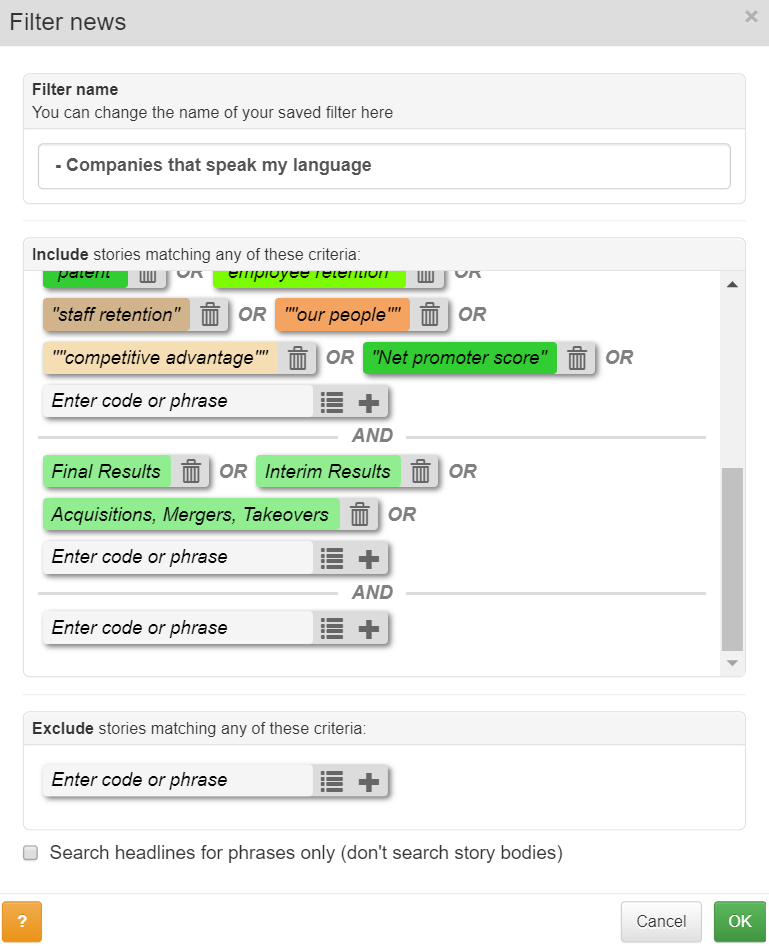 Here is a complete list (I’m still adding to it, suggestions are welcome!):

I limit the search to Interim and Final results announcements and notifications of mergers and acquisitions, because this is where companies are most likely to talk about their strategies and cultures.

It is a very broad news filter, returning a news item even if it only contains one of these words, which may not even be used in the sense I intend it.

A filter like this comes into its own when we want to quickly establish whether a particular company is a candidate for long-term investment, from the paragraphs around the words SharePad finds (it can also be applied to small lists). A positive result is a news item lit up in a kaleidoscope of browns and greens, the colours SharePad uses to highlight search words.

I am sure John knew what I would find: 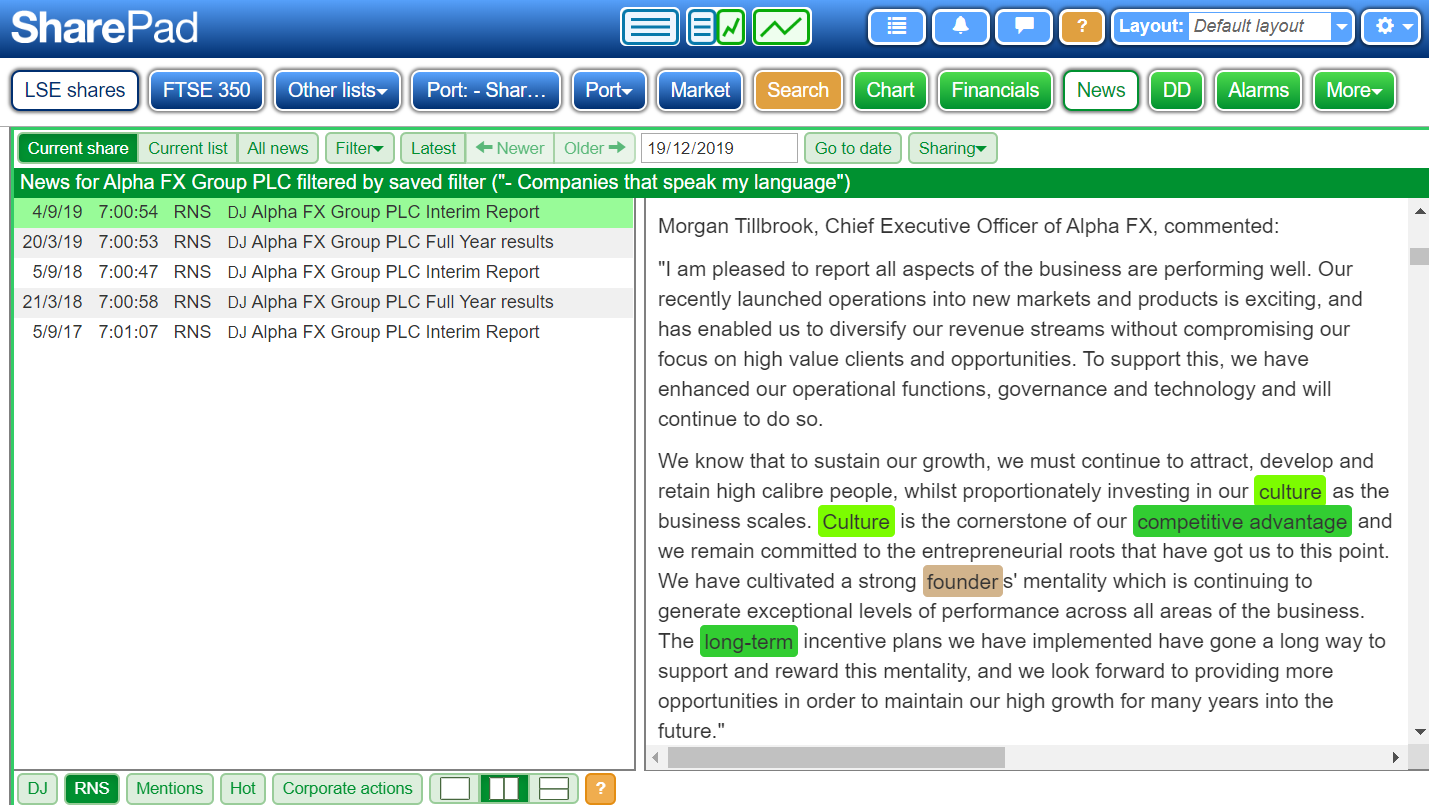 So, what can we actually learn from the text around these highlights?

Alpha FX helps companies and financial institutions protect their businesses from the impact of fluctuating foreign exchange rates using contracts known as hedges, a complicated and rather tedious activity I imagine many are delighted to outsource. It also facilitates foreign exchange payments. Nearly 60% of staff are ‘front office”, i.e. sales people or account managers, and just under 40% are “back office”, involved in technology, finance, compliance and so on.

The news feed is sparse because Alpha FX listed in 2017, and it contains no acquisitions, which is probably a good thing as it is difficult to develop a unique culture if it is diluted periodically.

The company says culture is the “cornerstone” of its competitive advantage. It has codified this culture (without sharing the code) and believes refining and developing it is so important it “takes precedence over chasing short-term profits”. Culture, it says, is its platform for growth and differentiates it from competitors.

A swanky new office, share options and a meritocratic culture of “progression and opportunity” that “challenges each individual to expect more of themselves and rewards them accordingly” will help it attract and retain “exceptional people”, and it’s employing more of them. Headcount grew 19% in the six months to September 2019, to nearly 100. It admits not everybody fits this culture.

Alpha FX also talks of its highly automated systems developed in house during the company’s short history (Tilbrook founded it in 2010). A technological lead (Alpha FX has been cloud based from the outset), wedded to a highly motivated sales-force may well give Alpha FX a competitive advantage that it can grow. It could be a perpetual recruiting machine, a company like Southwest Airlines, mentioned in my previous article, but the company does not divulge much to convince me of the uniqueness of this proposition.

The prospectus supporting Alpha FX’s flotation, is more forthcoming. In 2017, it listed a number of key strengths, the first and most multifaceted of which is culture. Many of its policies, like giving employees a stake in the company and a collaborative office, are good practice, but one stands out, relating to how staff are paid. It is reiterated in the company’s annual report.

“The Group has designed a remuneration structure that the Directors believe ensures employees are not pressured into making clients trade at inappropriate times or in disproportionate amounts, but rather are motivated to generate new business.”

Staff are rewarded for attracting new clients, and they receive an annuity income from those clients for as long as they stay with the firm, but they are not pressured into meeting revenue targets (there are none):

“…the Group places no revenue targets on these clients (or the employee’s portfolio) thereafter. Employees instead receive residual remuneration over the lifetime of the client, which the Directors believe encourages employees to take a ‘long-term view’ and always look after their clients’ interests in order to retain them.”

This is revolutionary isn’t it? My admittedly jaundiced view of the City is that it exists to skim commissions off customers whenever it can. Restraint, could be a genuine differentiator, and one a rival firm addicted to trading would find very hard to emulate.

It is also coherent with Alpha FX’s pitch to customers, which is on its Internet home page:

“There is no shortage of advice or opinions on where exchange rates are going. However, for those responsible for deciding how to manage their currency exposures, the elephant in the room is obvious – in the long-term, nobody can reliably predict the currency market.”

Alpha FX is providing a more prosaic service, one that should free companies from worrying about foreign exchange fluctuations and get on with running their businesses, not make them rich, or more likely poor, by trading foreign exchange contracts. It concludes:

“Achieving consistent and effective results often requires not only a change in strategy, but also a change in perspective. Fundamentally, this means managing currency in line with your commercial objectives and competitive landscape, rather than a market view or even a target hedge rate.

Ultimately, we help businesses that want to outperform their competition, not the currency market.”

It looks like a distinctive strategy rooted in the way Alpha FX rewards employees, and perhaps a sustainable competitive advantage. It also, to my mind, makes Alpha FX a force for good.

But how can we reassure ourselves the company isn’t just telling us what want to hear? In Morgan Tilbrook, AlphaFx has a photogenic young founder and chief executive, but anyone who has followed the story of WeWork and its charismatic founder and ex-chief executive Adam Neumann, will know that does not always work out well for shareholders.

Space, time (I have Christmas crackers to pull too), and an insufficient chart library preclude a full on Maynard Paton style inquisition of the accounts but judging by Alpha FX’s short track record in SharePad, it is no WeWork. Yes it is growing (highlighted in yellow), but it is also highly profitable (blue), cash generative (pink) and unencumbered by debt (green).

The numbers suggest Alpha FX is doing something special, and maybe its people-first policies will enable that to continue. 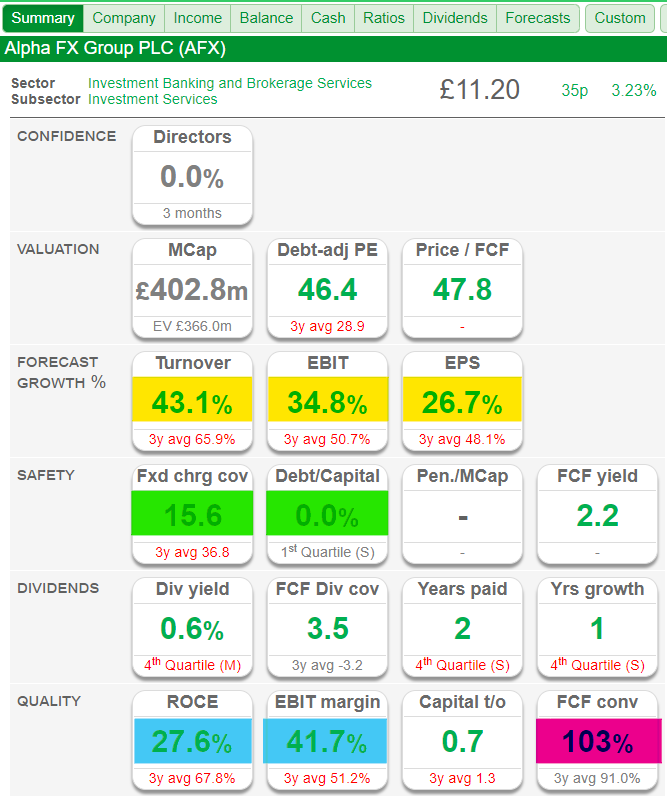 From the horses’ mouths…

Glassdoor, the recruitment site, is my go-to source for employee views, but the number of Alpha FX reviews on Glassdoor (71 compared to a total employee base of 97) make me think the company encourages employees to post reviews (which does not mean it tells them what to say). Given that recruitment is central to its strategy, it would be negligent not to manage its reputation on sites people use to find out about potential employers.

It cannot control negative reviews from disgruntled employees though, of which there are very few, and the company alleges some of those are fakes posted by competitors.

Make what you will of it then: Alpha FX has a very impressive Glassdoor profile, although if you are thinking about applying for a job, read carefully about the long hours!: 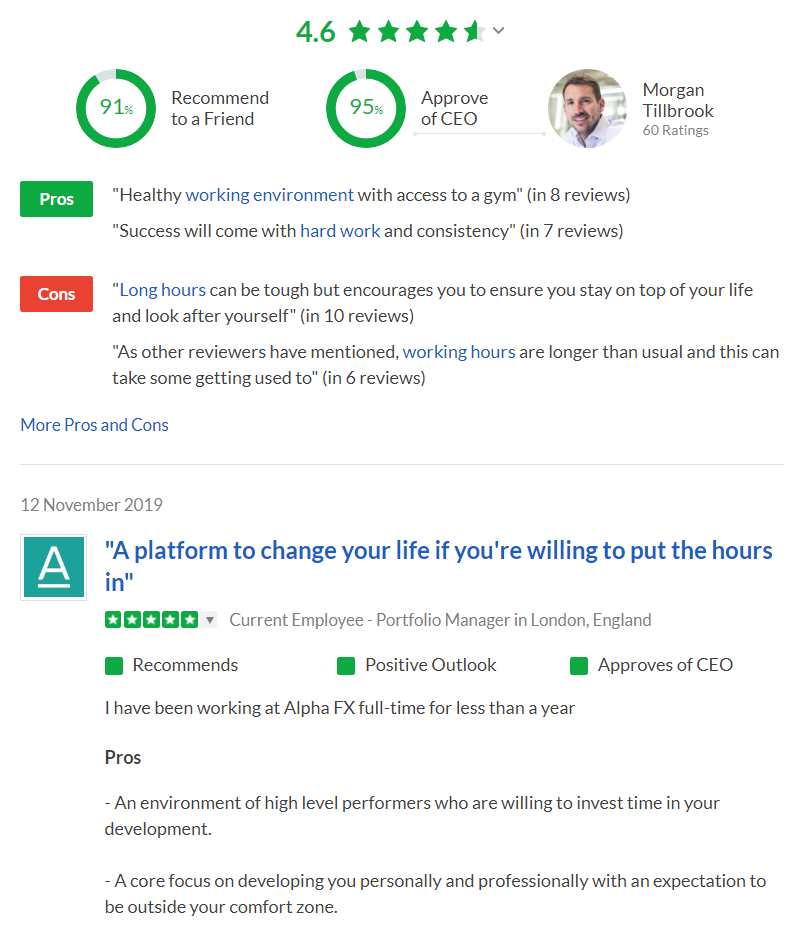 I am not an expert in financial service providers, but I know of somebody who talks very wisely about them, SharePad’s own Jeremy Grime. In his weekly commentary (25 November) Jeremy identified Alpha FX as one of five “superstocks” or “compounding machines”, the kind of business I am also describing, highlighting its “incentivised” sales model. His mate thinks it’s a “money fountain”!!!

Perhaps unsurprisingly the shares are expensive when judged by conventional multiples like price to earnings. Those in the know like John and Jeremy bought them earlier, perhaps at a reduced valuation, but if Alpha FX is a superstock, that will not matter in the long-run.

I have some new search words to my filter:

Thanks John, and Merry Christmas everybody.