SharePad is not just about discovering new shares, it can help us see shares we are familiar with in a new light. Richard uses it to re-evaluate old favourite Portmeirion and his confidence begins to crumble even before events take a nasty turn…

This week, and in a fortnight’s time, we will look at two shares I have owned for a long time. Whenever I open their annual reports it feels like home. They are my favourite kind of business, long established, profitable, reliable and they make something tangible. Familiarity, though, can be a dangerous thing, because it breeds complacency.

By focusing on the numbers we can put the stories we tell ourselves about the shares, and the stories the companies themselves tell us, to the test.

On the surface, the numbers in SharePad are telling us Portmeirion is a profitable, growing company. In each of the last eight years, it has earned a return on capital of around 20% (blue bars) and operating profit margins of around 11% (black line). These are pretty good figures. 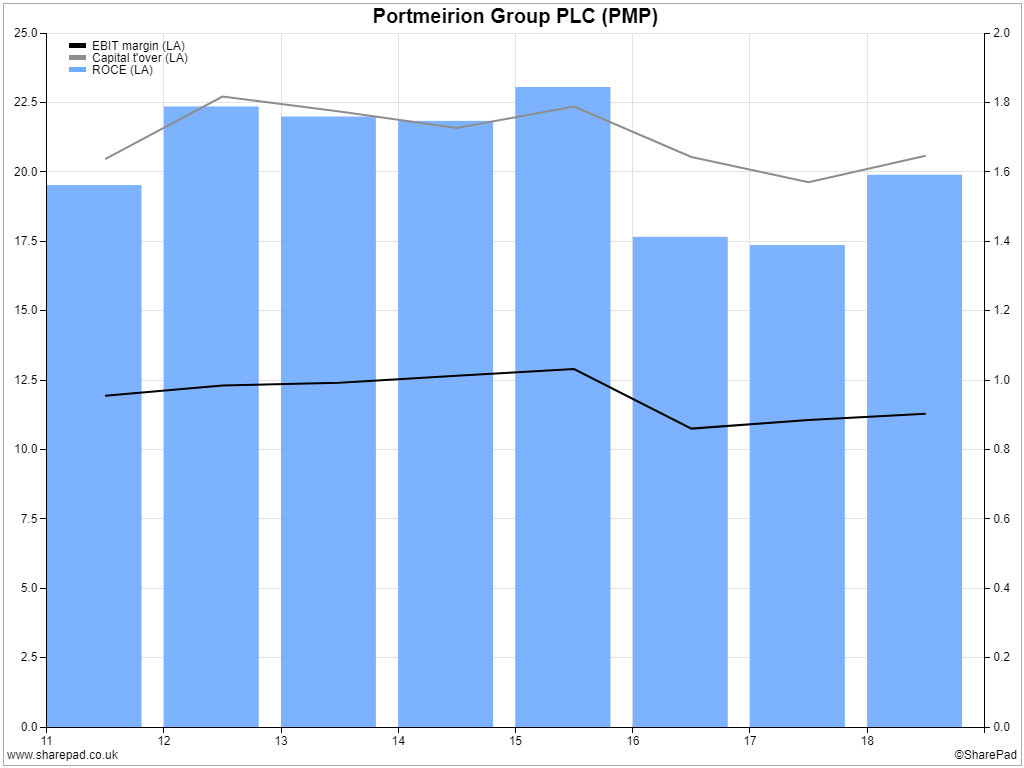 It will not be like this every single year. Portmeirion operates a factory in Stoke and employs designers, potters, and administrative staff so, just like Bodycote, it has high fixed costs. In 2008 during the financial crisis, when the public’s appetite for posh tableware waned, it could not reduce costs as quickly as turnover fell and so profit was squeezed.

Demand bounced back immediately. In fact, it bounced back stronger because in 2009, Portmeirion bought the Spode and Royal Worcester brands out of administration, paying very little for what turned out to be valuable assets. Spode Christmas Tree earns £10m in a typical year, more than 10% of total turnover (£90m in the year to December 2018). It pales, though, compared to Portmeirion’s mega-brand, Portmeirion Botanic Garden, which the company says routinely earns it more than £30m in turnover.

You can probably work out which is which:

Portmeirion has grown turnover too, by nearly 70% over the last eight years, and profit by a little more than 70%: 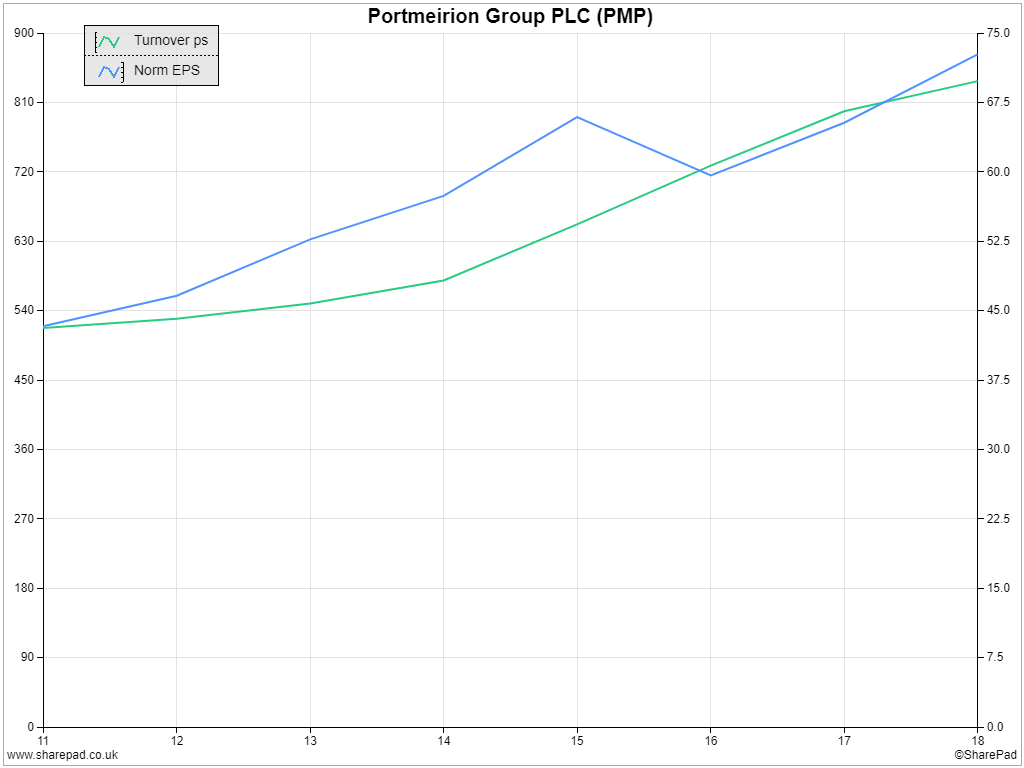 If we can withstand the occasional setback, Portmeirion has the basic financial hallmarks of a good long-term investment. And the shares are not too expensive. SharePad says the debt adjusted PE is 16. Scratch below the surface, though, and questions arise… 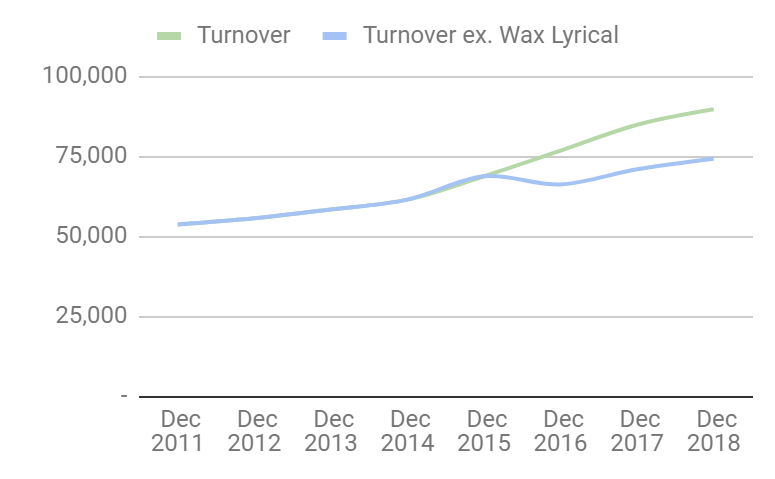 Excluding Wax Lyrical (blue line), turnover has grown 38% over the last eight years, a compound annual growth rate of 4%. In its first full year as part of Portmeirion, Wax Lyrical’s turnover was pretty much the same as it was in 2015, its last full year as an independent company. In 2018, though, Wax Lyrical grew 11%.

Portmeirion expects it will be able to export scented candles through its agents in USA and Asia, both big markets for tableware, as it grows into a supplier of Great British homewares.

Big changes in the cashflow statement

We can work out more of Portmeirion’s story through two sections of the Cash tab in SharePad, which is a generic presentation of the company’s cash flow statements over many years.

Here, we can see the impact of costs exactly when they occurred, which shows us when the company made really big decisions. All we have to do is look for the big numbers (highlighted blue in the screenshots below) and note the year they occurred in. Then we can seek insight in the annual reports.

First, we will look at the reconciliation of profit to net cash from operations. Starting from the second row, there was a big increase in depreciation and amortisation in 2016, from £1.2m, which was typical of previous years, to £1.8m. Depreciation and amortisation are added back to profit to establish cash flow because they are not a cash cost but an accounting adjustment. We will come back to this figure when we look at the investments section of the cash flow statement (see below).

In 2014, Portmeirion explained that it had not been able to control stock levels adequately because of high levels of demand but the really disappointing thing is that although turnover did increase markedly in 2015 and the company coined in the cash, the growth rate subsequently subsided. While growth continued to plod along in the UK and the USA, Portmeirion experienced a rapid and protracted decline in South Korea, its fastest growing market.

Although a small majority of Portmeirion’s turnover from ceramics is manufactured in the Far East, Botanic Garden is bone china manufactured in Stoke-on-Trent, which has been very popular in South Korea. Most of the £1.5m capital expenditure in 2015 (first row, Capital expenditure, in the table) was spent on a new kiln at its Stoke site, presumably in anticipation of more growth, especially from booming South Korea. That, and the £16.7m acquisition of Wax Lyrical in 2016 (third row, Acquisitions) is why depreciation and amortisation increased in 2016, the first cash flow item we looked at. The increase in capacity though, coincided with the bust in South Korea.

What you make of this will probably depend on whether you are a glass-half-full or glass-half-empty kind of person. It is reasonable to be concerned at the way the company gobbles up cash when it anticipates growth, about the potential for a big but temporary decline in profit if demand falters, and about the somewhat chaotic nature of Portmeirion’s growth outside of the UK and the USA.

But Portmeirion has remained profitable while important parts of its business have been misfiring. High fixed costs mean profits should rise faster than turnover at least while it has spare capacity, and growth in newer markets may be chaotic, but there is growth. Even South Korea may finally be turning: 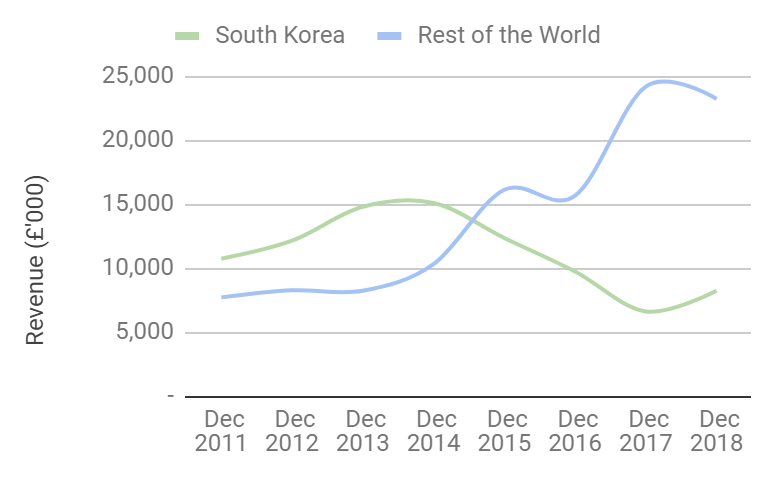 Sting in the tail

That was my conclusion yesterday, the day before I was due to file this article with SharePad HQ. This morning (Tuesday 14 May) Portmeirion published a trading update that reported 5% growth in turnover in its biggest market, the UK, and 8% growth in its second biggest market, the USA, but an overall decline in sales of 10% compared to the same period in 2018 due to its performance in South Korea.

What the announcement did not say is more revealing. Portmeirion did not reveal the extent of the fall in turnover in South Korea, and since sales there only accounted for 9% of the total in 2018, the decline must have been calamitous. Neither did Portmeirion disclose how the bigger Rest of the World segment performed.

Since Portmeirion sells through a single distributor in South Korea it seems likely that although the distributor bought lots more stock in 2018, the demand from South Korean consumers is not there. In other words, the upturn suggested at the end of last year and reported in March is a figment, the distributor has too much stock, and little need to buy more from Portmeirion.

I do not rush to judgement, so I do not even know what I will do with my own investment. But you may have witnessed the point at which my glass turned half empty.

Part of the allure of Portmeirion is that its main brands have been popular for many decades, some of them for centuries. That is true in the UK and the US, but the idea Portmeirion’s problems in South Korea are temporary is being severely tested.

Though Portmeirion expects to make up some of the 10% decline in revenue by December 2018, we know, because of high fixed costs, that the effect on profit will be higher than whatever decline it achieves. Portmeirion confirms pre-tax profit will be significantly below its performance in 2018 for the full-year.

As I type, rather frantically, the price is 25% lower than yesterday’s close, so the debt-adjusted PE will be significantly lower too. But that will only be consolation if you are a glass-half-full type of person.