Bodycote: A stalwart in cyclical clothing

Richard investigates a company that not only walks the walk, it talks the talk.

I am not going to lie, even if it means shattering the illusion investors are cool rational calculating machines. I experienced a prolonged period of joy when I started investigating Bodycote. Snared by my Fundsmith filter, the company not only walks the walk, it talks the talk.

As you would expect, Bodycote is profitable, cash generative, and not heavily indebted. The shares trade on a modest valuation. But the annual report surprised me, going the extra mile to explain the company.

It heat-treats metal to make it stronger, harder wearing, and less corrosive. Heat treatment is a vital process in the manufacture of countless components from fans in jet engines to seat belt buckles. “Classical Heat Treatment”, earns the company about 76% of revenue and higher value “Specialist Technologies” earn the rest. Bodycote says it is the global market leader, a recent profile in Manufacturing Week says it is five times bigger than its closest competitor. Some of its specialist technologies are proprietary. As you can see from the chart below, it is not just profitable, but it appears to be getting more profitable: 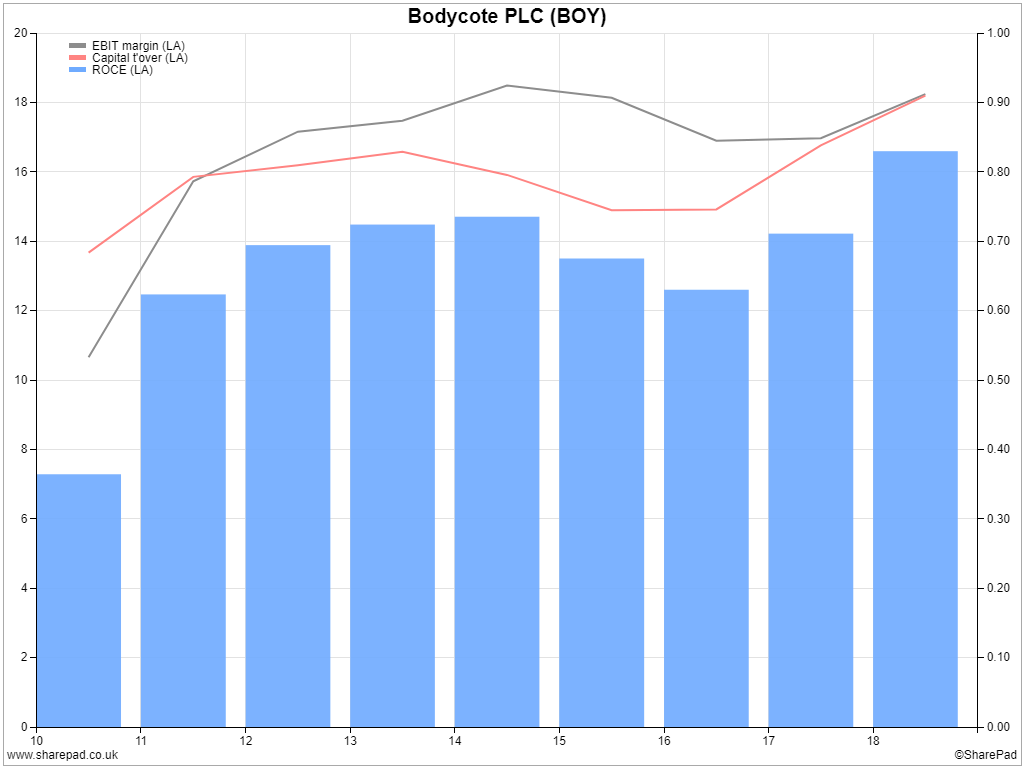 No other company can supply multinational companies like Bodycote can, because Bodycote is there, wherever its customers are manufacturing, providing a wide range of processes to uniform quality standards from 180 plants worldwide. It has more know-how than local competitors, greater economies of scale, and it is more reliable because it has more capacity. The sheer cost of creating a network like Bodycote’s should deter new entrants, and the fastest growing parts of its businesses are the high margin specialist technologies, which is one of the reasons why Bodycote is becoming more profitable. Three of its key performance indicators are return on capital employed, profit margin, and cash flow, so it talks my language.

It is probably a very well managed business, the numbers point to it and so do the words.

Sting in the tail

But there is a sting in the tail for investors in Bodycote: unpredictability. You might not realise, judging by the high levels of profitability and decent growth this decade, that Bodycote has been prone to occasional profit collapses. The last was during the financial crisis of 2008-2009. In 2009 Bodycote barely broke-even on a company adjusted basis, and it reported a loss.

Here is the chart we just looked at, but extended into the previous decade to show you the impact of the financial crisis of 2008: 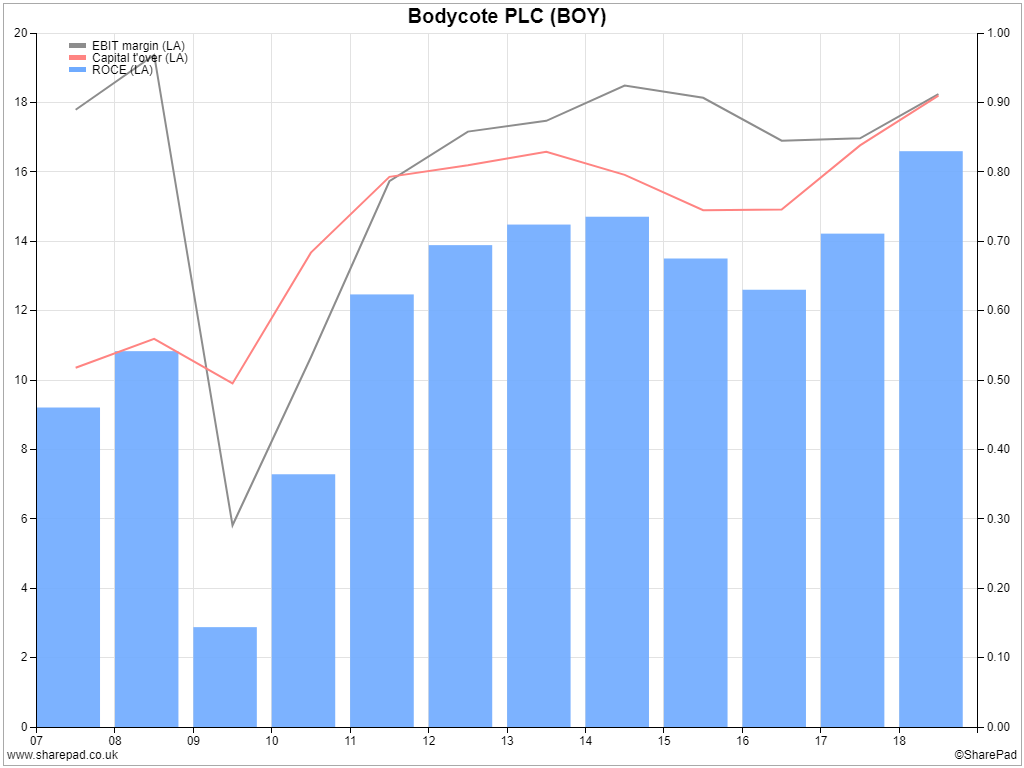 The weakness in Bodycote’s business model is high fixed costs. To process metal, it employs lots of people, who use lots of equipment, in lots of plants. This would be OK, were it not for occasional slumps in demand. Some of Bodycote’s markets, like civil aerospace, are relatively stable, but others, industrial and automotive for example, fluctuate more in response to levels of prosperity generally.

Fixed costs are not fixed absolutely, but they do not decline gracefully as processing volumes decline. Closing facilities, laying people off, and disposing of idle equipment takes time, and involves additional temporary costs. Because profit is the difference between turnover and costs, if turnover falls but costs cannot decline at the same rate, profit is squeezed. This is what happened to Bodycote in 2009, when customers scaled back production in response to the financial crisis.

When profit changes more than turnover, a company is said to have operational gearing, and we can see the extent of it by plotting the annual change in turnover and profit in SharePad: 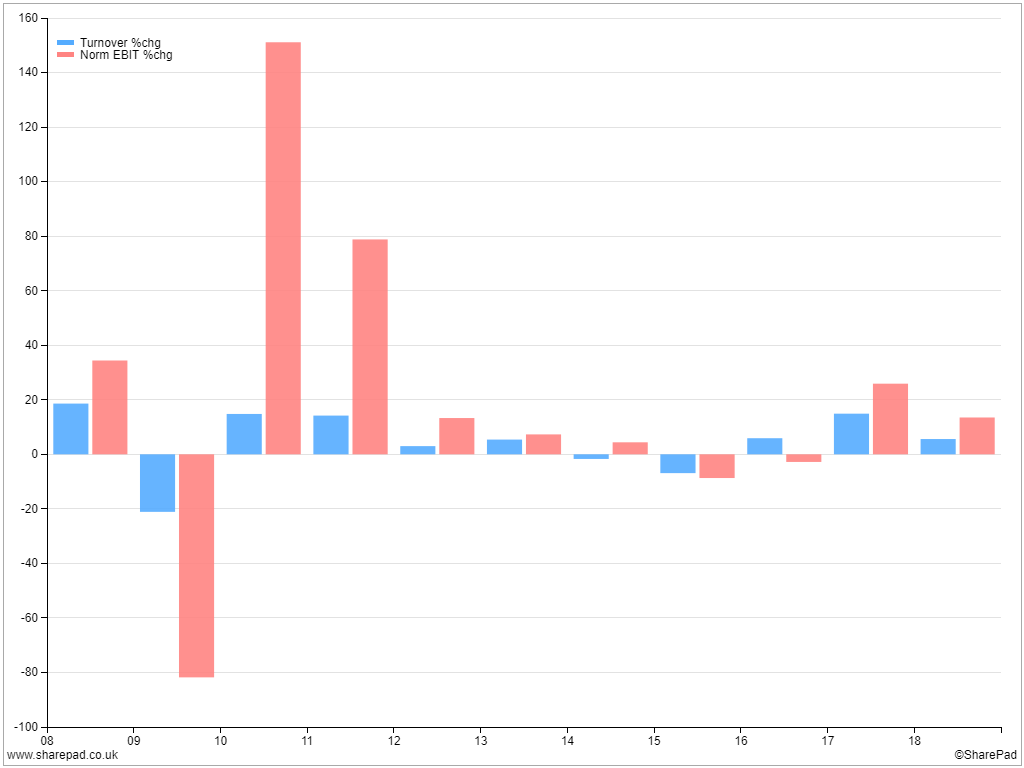 Revenue (the blue bars) fell 20% in 2019, but profit (the pink bars) fell 80%. Bodycote took decisive action, closing facilities and laying people off, and profit rebounded as customers returned realising the long depression many people predicted was not materialising. In 2010 and 2011, revenue growth of about 15% was converted into profit growth of 150% and 80% respectively. Since then, the variation in turnover has been less extreme, and so has the variation in profit, although profit remains the more variable.

At the end of 2009, after a 60% fall in the share price, the stock market valued Bodycote at a relatively lofty looking 18 times profit on a debt-adjusted basis, but that was not because the price was high, it was because the company was barely making any profit at all. In future, we know, Bodycote would profit handsomely and the share price was actually low, but it was only those investors who could see past the low profits the company was currently earning that would seize the day (the share price is up about 750% since the end of 2009).

The ineffectiveness of the PE ratio, when applied to cyclical companies, has led some investors to other metrics, principally price to turnover. As we have already discovered turnover is less volatile at companies with high fixed costs and provided there is not more afoot than a temporary decline in demand for a company’s services, the price to turnover ratio can be a better indicator of when the shares are good value.

The big troughs in the share price (the black line in the chart below) align roughly with the lowest annual price to turnover ratios (blue bars): 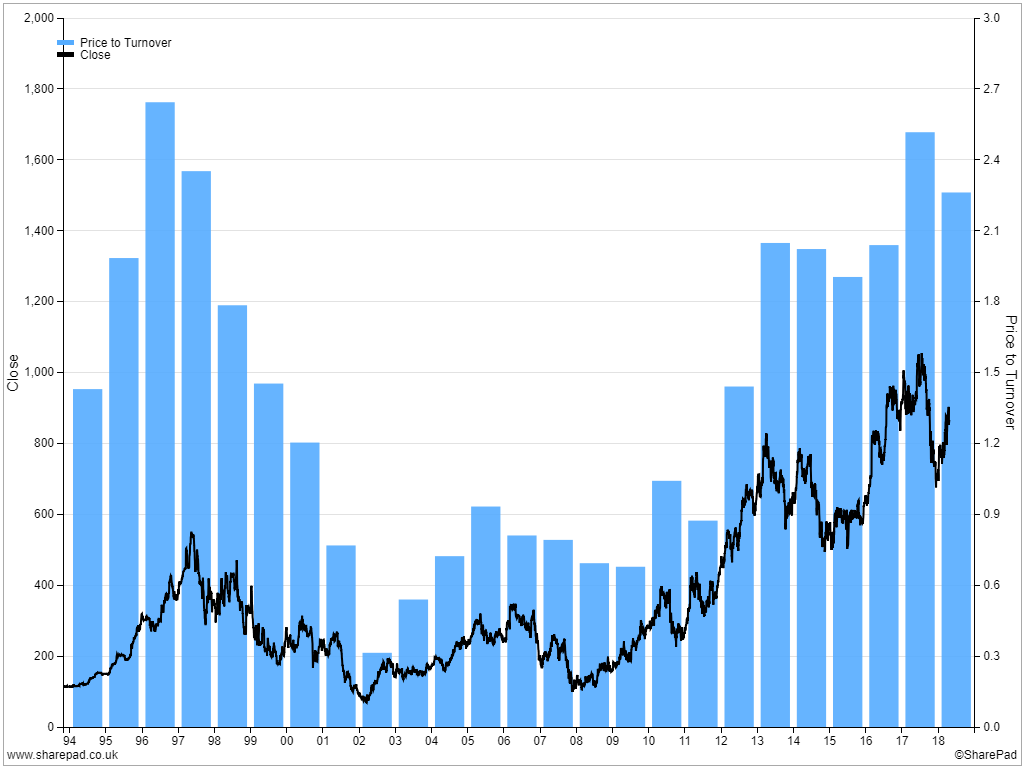 The ratio tells us the shares are more expensive than they were, but it does not tell us whether they are too expensive to buy now. When it comes to judging the absolute value of shares, it is earnings and cash flows that matter. To make sense of them, though, we need to use an average.

The custom table below, generated in SharePad, provides us with the raw data to work out how Bodycote might have performed in 2018 if it had an average year, instead of a good year. I have chosen reported Reported Return on Capital Employed so the calculation is conservative. It includes the one off-costs and write-offs Bodycote experienced in 2009 on the assumption they might happen again. If we average ROCE over the twelve years since 2007, the first row, including the two years it was negative in 2008 and 2009, we get an average ROCE of just over 10%.

Multiply the £818.4m capital employed in 2018 (the final figure in the second row) by average ROCE and we get a normalised profit figure (before interest and tax) of £82m, significantly less than the £132m reported in 2018. Essentially, this is the profit Bodycote might have earned if 2018 had been an average year.

To convert this figure into a debt adjusted PE multiple, we need to divide the normalised figure into Bodycote’s Enterprise Value (EV) of £1,639m. The multiple is 20 times reported profit.

Having spooked you with talk of collapsing profits, I am going to come out and say it. I do not think that is an excessive valuation, considering the probability the company has extended its market dominance and developed markets for more valuable processes since the financial crisis.

To hold the shares through thick and thin might take nerves of steel though.