When the facts change…

Events at Luceco and Oxford Metrics may tell us more about the companies’ strategies, and whether they might make good long-term investments. Richard investigates.

It is hard to believe Luceco’s share price is below the price it floated at in 2016, when turnover was 71% higher in the year to December 2021 than it was five years before, and profit was 163% higher. 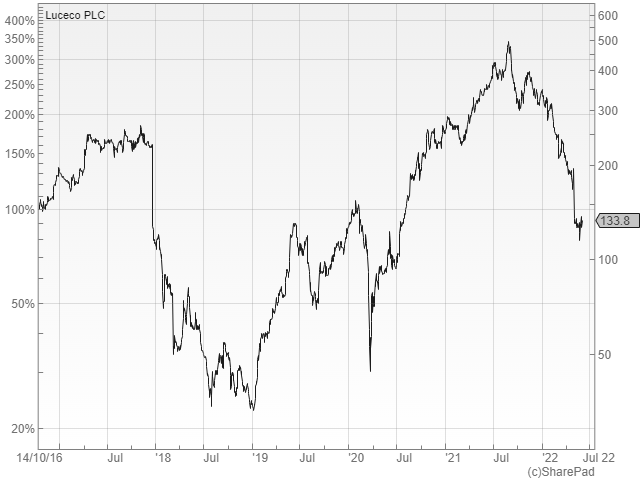 When I evaluated the company in March, these hurdles stood between me and investment:

That list paints a grim picture, partly because I have not offset it with all the good things about Luceco that I mentioned in my earlier article.

Roll your own risk register

In fact, as I compiled this risk register, I was positive about Luceco right up to number 5, when I felt torn.

The price was cheap and profitability might vary but the business has performed well over the years. On the other hand, dependence on products made in China could undermine Luceco’s capacity to profit through thick and thin.

Downturns in trading are an opportunity to buy shares in good businesses, and not pay very much for them, and Luceco’s announcement that it will make less profit than expected in 2022 and less profit than it achieved in 2021 (See Bruce’s commentary for details), has intensified the dilemma.

The impact of the end of the home improvement boom has been exacerbated by destocking at Luceco’s customers, distributors and retailers like Screwfix and B&Q. This appears to have caught Luceco by surprise.

The unsettling thing about companies whose customers maintain stocks is it can be difficult to determine how much they are growing. Growth in one year, when a customer buys too much stock, is undone the following year when it does not need to replenish it.

Destocking drove me to distraction at Haynes Publishing and Portmeirion, which I wrote about in this evaluation of Vitec, another company that had suffered a surprise slump in sales as customers destocked.

I do not think Luceco is especially prone to overstocking and destocking. Except in the most turbulent times, it has grown steadily, but it has big customers and if they get things wrong, Luceco will suffer.

After the profit warning, a reader, David, commented on my article. Is the long-term case intact? He asked. Is this a case when a cheap share price is not cheap after all?

Unfortunately, I did not realise David had commented, so this is my belated answer: I do not know. And that is why I am not inclined to take my interest in Luceco further at the moment.

To invest, I need to be comfortable with the risks, that cumulatively they do not reach a threshold that would concern me too much, and that the company recognises the big risks, and addresses them in its strategy.

As I get to know Luceco, the cumulative risk is rising, and I cannot reconcile myself to the biggest one.

The company maintains buffer stocks in case of temporary disruption, and if the disruption were to last longer it might have time to find another way of manufacturing.

But a contingency plan is not a strategy. Switching supply in a hurry would be a radical change, it probably would not be a smooth process, and I doubt a Luceco that used contract manufacturers, or that hurriedly acquired a manufacturing facility elsewhere, would capture the efficiencies it has over many years in China.

Other companies that manufacture abroad, like one-time favourite XP Power, have chosen to diversify across multiple manufacturing sites, transplanting what they have learned at one site to another. XP Power owns sites in China and Vietnam, and it is building a factory in Malaysia.

I find this more comforting (though having lost a court case for stealing trade secrets, XP Power may not be the golden share I once thought).

It is not often I speculate about businesses but back in January I said this of Oxford Metrics’ underperforming subsidiary Yotta:

If Oxford Metrics knows how to run one business well, maybe it can turn the other around. Failing that, just disposing of Yotta might improve Oxford Metrics.

To recap. In January, Oxford Metrics was two businesses.

The main one, Vicon, makes motion capture technology used by doctors, industry and filmmakers to measure the movement of people and things. This business is very profitable and growing.

Yotta, its smaller, sometimes unprofitable child, supplies asset management software as a cloud-based service, primarily to local authorities. They use Yotta to catalogue and maintain assets like streetlights.

Yotta once made good profits surveying highway assets using vans equipped with cameras but it pivoted to focus on the software it had developed to manage the data it was collecting and sold off the surveying side.

I think it’s fair to say it never fulfilled its promise, which the company said extended beyond highways and local authorities into industry and utilities and internationally.

Yotta’s profitability dwindled and in 2019 and 2020 it made a loss. In 2021, pre-tax profit was less than £1 million, which makes Yotta’s price of £52 million remarkable (in a good way for Oxford Metrics shareholders).

The announcement could hardly have been worded more enticingly for a strategy geek like me:

The sale not only delivers significant value for Oxford Metrics’ shareholders in the near term but also brings increased clarity and focus to the Group’s stated five-year growth plan. This plan, targeted at growing revenue by 2.5x and returning the Group to 15% Adjusted PBT margins by the end of the plan, can now be undertaken with one core technology stack, unlocking greater operational leverage. The sale also brings greater coherence to the Group’s end markets, each of which is underpinned by structural growth drivers.

Let us unpack this statement. The beginning alludes to the windfall that will be invested in growing Vicon now. The end explains how losing Yotta increases Oxford Metrics’ focus. The two businesses had little in common, and certainly not the two most important things: the technology and their customers.

Only the middle of Oxford Metrics’ announcement unsettles me: The five-year plan to grow revenue by 150%.

When management pins its reputation on ambitious revenue targets, there is an incentive to go for broke

One of the ways Oxford Metrics plans to grow is by acquiring businesses to broaden its product range and its technological capabilities. Spending too much on acquisitions is an easy way to boost revenue and a well-known way for a company to go broke.

Diligent acquisitions could improve Oxford Metrics, though, and I would much rather it focus on the business with the most promise.

When the facts change…

When the facts change, I change my mind. Today that means that Oxford Metrics has moved above Luceco in the pecking order of my watchlist.