Richard finds answers to his questions about Luceco, a manufacturer of electrical products that power our homes. Knowledge, he finds, can be as powerful as electricity…

This time last year one of my screens picked up Luceco, a company that makes electrical products like sockets.

I wrote down my hopes and fears in SharePad and did not take it any further. Other shares caught my eye.

Well, it has happened again. Luceco has continued to perform well, yet the shares are trading at very modest multiples of profit. This time, I have decided to poke my nose in.

If Luceco keeps growing, the shares are a bargain. The profit multiples are little more than 10. In theory, that means the potential return for investors at the current level of profit is roughly 1/10 of profit per share or 10%. Returns will be greater if all goes well.

Perhaps Luceco is the quintessential good company at a cheap price.

In most years it is highly profitable in terms of Return on Capital Employed (ROCE), and it earns more revenue and profit than it earned the year before. In cash terms it is also highly profitable, and it is not heavily reliant on debt.

The historical numbers may not tell the whole story though. Perhaps the company has a less profitable future.

We can form a view, first by assessing what the company says about current trading, and secondly by assessing its strategy.

Luceco makes electrical products from commodities like plastic and copper in China and ships them, principally to the UK.

The big worry about businesses like this at the moment is raw material and shipping cost inflation due to the pandemic and the war in Ukraine.

Despite higher input costs, Luceco says it managed to maintain high operating profit margins in 2021 by controlling other costs and because it has been manufacturing and distributing more efficiently in higher volumes.

Higher volumes exist because we have been busy improving our homes during the pandemic. Because the company owns its own factory near Shanghai, it struggled less than rivals to meet increased demand.

Luceco says the year to December 2021, when revenue and profit increased by about 30%, was exceptional. It will be hard to improve on this year’s profit in 2022, although it might.

The company has increased prices to make good cost increases and although some costs, like shipping, are coming down, management is very confident that it can continue to raise prices if necessary.

The spectacular growth in home improvement will not last though. We will find other things to spend money on now pandemic restrictions are over, and if our fears about the economy come true we will have less money to spend.

The three forecasts forming the broker consensus reported by SharePad suggest growth in turnover will moderate in the years ahead: 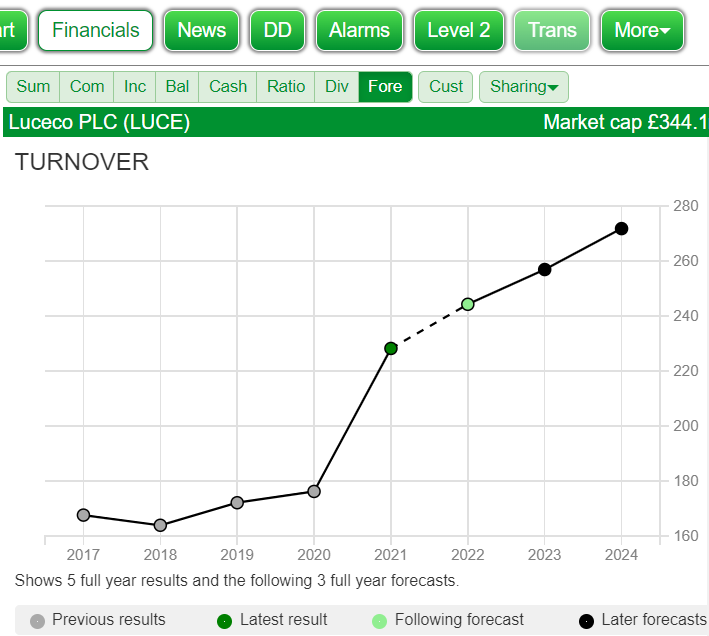 But judging by management and analyst’s expectations, the company’s prospects in the immediate future are far from dismal.

Why is Luceco investing in LED lighting?

Wiring Accessories, which earns Luceco nearly half of its turnover, is by far the most profitable segment and this has been true throughout the company’s short time as a listed business: 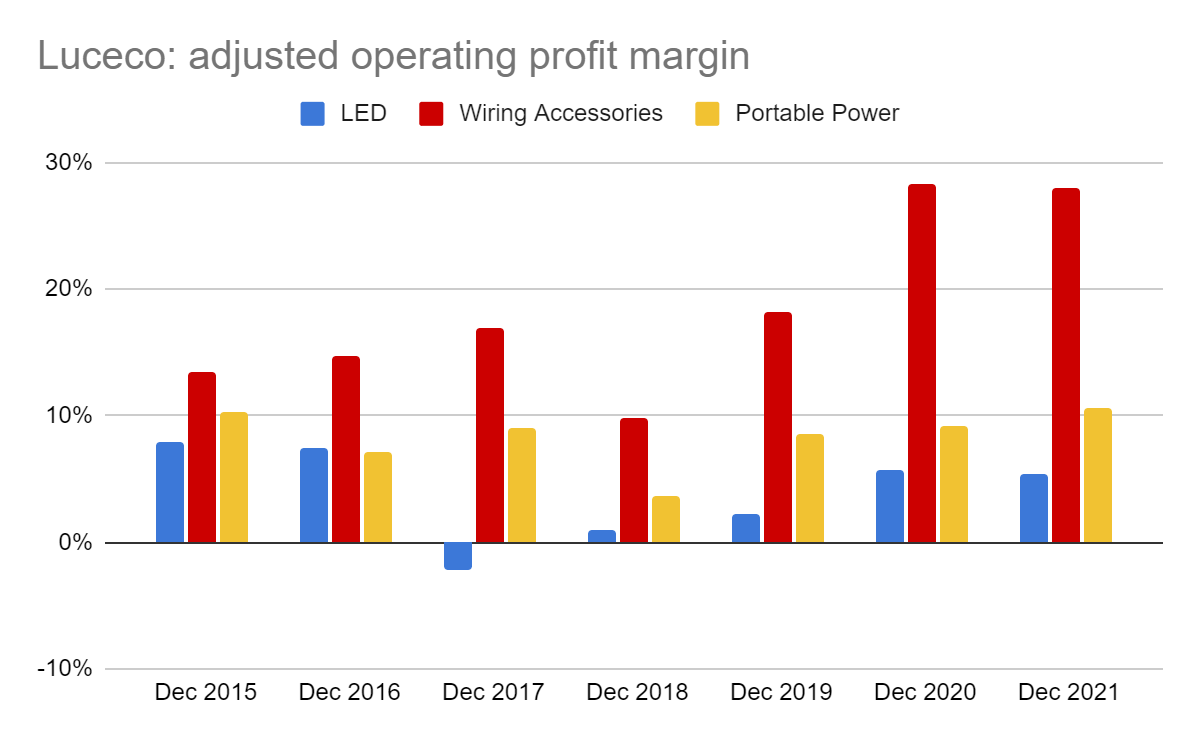 By contrast, the least profitable segment, LED Lighting, which is responsible for about a quarter of revenue, is the only segment never to have achieved a double digit profit margin and the only one to have lost money (although as we will see, 2018 was an exceptional year).

The company launched its first LED lighting range in 2013, hoping to profit as households and businesses retrofitted their properties with more reliable and energy efficient lighting systems.

Why would Luceco invest in a new market when it earns such fat margins in existing ones? Perhaps the boom in LED Lighting promised more growth.

The evidence from the company’s annual reports confounds this theory, somewhat. 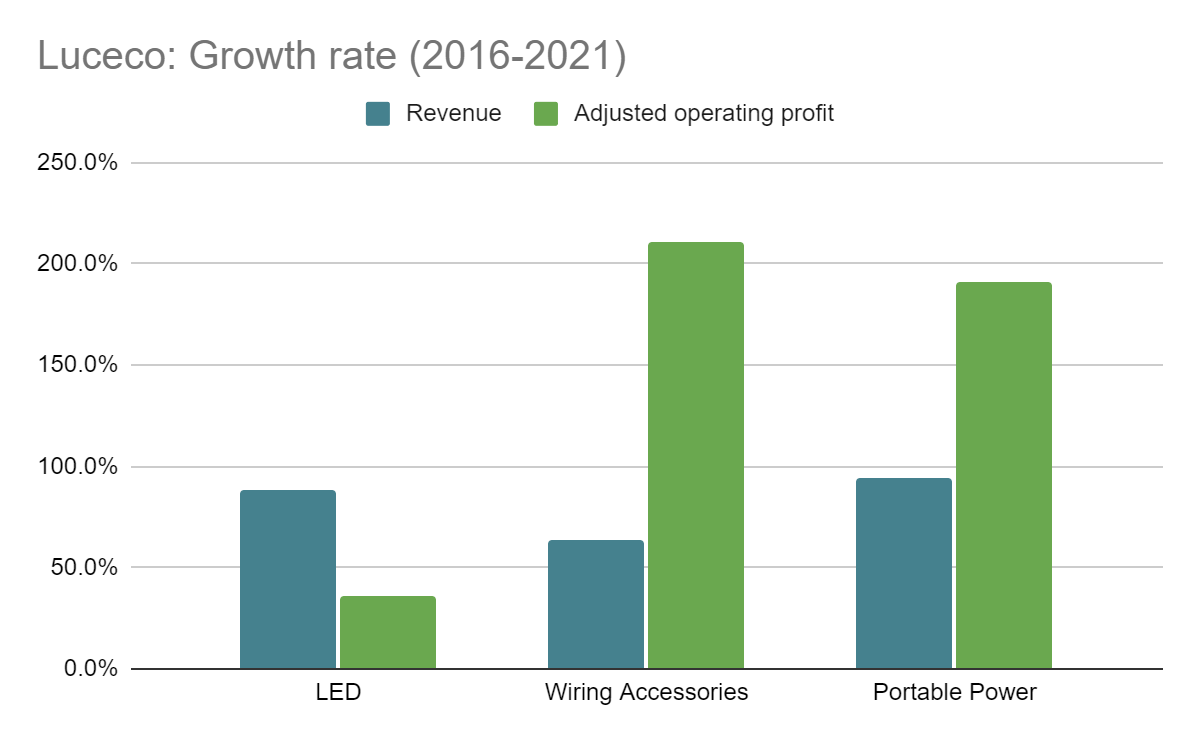 All of Luceco is growing, but over the last six years the two older segments have grown fastest. In terms of turnover, the Portable Power segment is the winner, having nearly doubled in size.

Having more than doubled profit, Wiring Accessories has grown most in terms of returns. Profit growth for the LED segment has been weak in comparison.

Since 2014, Luceco says new product development has resulted in £26 million additional turnover from LED lighting, but Luceco has also shown that it can grow by developing new products in its older divisions. It has increased turnover by £20 million from new circuit protection products and £16 million from new USB sockets, for example.

In the annual report, the company explains that its LED strategy, which is targeting professional grade products and expansion in international markets “inevitably takes time to mature, which holds back margins in the short term.”

I think growing the LED Lighting business may be harder than Luceco expected. The 2017 annual report recognised that the residential market was largely commoditised, but this is the market it has traditionally served through large distributors like Screwfix.

In future, the company said it would focus on technical lighting solutions for the commercial market. It believes higher levels of complexity both in the product and in the process of selling it to architects, designers, consultants and end customers, creates bigger barriers to entry and more opportunity to profit.

By 2018 Luceco had developed a comprehensive range of commercial LED products, but established commercial lighting specialists like FW Thorpe (also listed in the UK) have been addressing this market since the beginning of the decade.

In FW Thorpe’s recent annual reports it has been warning that the commercial LED boom has had its best days, and although there is still more work to be done early adopters may already be thinking about replacing their lighting.

It looks to me like the barriers to entry favour the incumbents, which include large multinationals.

Getting to the top takes time. Luceco reckons it is number one in UK Portable Power, number two in UK Wiring Accessories, but “top ten” in UK LED Lighting. This is important because manufacturing and distributing in high volumes gives the two more profitable divisions economies of scale.

It acquired a 20% stake in Sync EV, a small UK supplier of residential charging points last year, and the rest of the company just over a week ago.

It looks like it is earlier to the game in a market that is closer to Luceco’s high margin businesses.

But Luceco is far from the only company that senses the opportunity. Last year FW Thorpe announced it had acquired a small Dutch supplier of EV chargers and cables with the intention of introducing them into the UK.

I am not suggesting the two companies will compete directly. I mention developments at FW Thorpe because I am familiar with them, but they are illustrative of the interest and potential for competition in the nascent EV charging market.

It is always difficult to gauge how sensitive a company’s profits are to recession if it has not been listed very long. 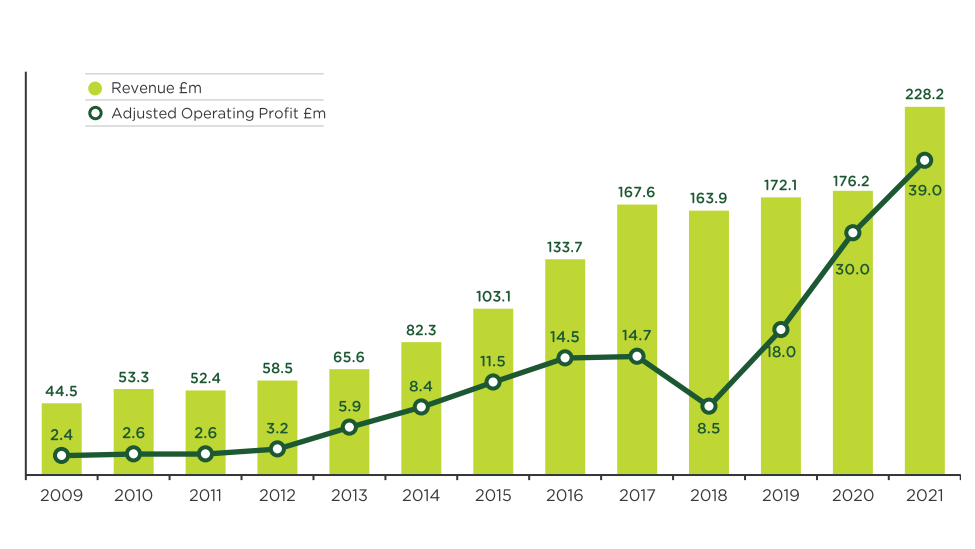 Somewhat conveniently the chart starts after the nadir of the Great Financial Crisis. Chief executive John Hornby’s memory stretches back further because he had already been running the business for many years. He says turnover fell 5 to 10% during the financial crisis.

The only other year revenue, and more substantially, profit growth declined was 2018, when Luceco faced a slowdown and input cost inflation, the latter similar to the situation it has faced in 2021.

The difference then was that its accounting systems were not up to the job, management did not realise margins were being squeezed, and failed to raise prices soon enough to prevent a sharp dip in profit.

Mr Webb was brought in to modernise and automate Luceco’s accounting and management information systems and the result in 2021 was different.

Luceco’s resilience may be due to its focus on the Repair, Maintenance and Improvement (RMI) market, which consists of DIYers and electricians. RMI is responsible for about 80% of turnover and is a faster growing and less cyclical market than new construction.

The company believes that electrical products are more attractive than the RMI market in general because they are more technical, more regulated, and growth is being stimulated by advancing technology and efforts to electrify the energy supply.

This tallies with my experience of FW Thorpe and also Dewhurst, which makes lift components. Both businesses sell electrical items that form a relatively small portion of the repair, maintenance and improvement budgets of their albeit commercial customers.

They have also proved to be resilient businesses.

Although the LED Lighting business is underperforming the rest of the business, it is still profitable and growing. The self-inflicted damage in 2018 may be a one off, but before I dance into the sunset with Luceco, there is one more potential dealbreaker.

It involves two of the company’s strengths and their potential to become weaknesses.

Luceco’s vertically integrated manufacturing relies almost completely on its factory 150km outside Shanghai. On the demand side its relationships with a handful of UK customers responsible for 50% of its turnover are also critical.

The vulnerability created by the factory is exemplified by the current outbreak of Covid-19 in China, which could close the factory. It is running normally at the moment, and Luceco has enough stock to cover short-term disruption.

A modern facility with a skilled workforce in a relatively low wage economy is a big competitive advantage. But the possibility of higher tariffs and disrupted trade should relations with China deteriorate means a second manufacturing centre elsewhere would make the company more resilient, at some expense.

Listening to the company answer questions about this in presentations, the dilemma is almost palpable. It does not want to make the investment unless it needs to. The question is: How bad would things have to get before it needs to?

I am more sanguine about big customers. Luceco explains it has long established relationships with them, and the cost of changing ranges is high.

I take it as read that companies are trying to grow, so for me the really interesting question is what could stop them?

That is why I have spent so much of this article scaling a wall of worry.

Having peaked over the top of the wall to imagine what lies ahead, I see risks, as always, but if you have climbed this far up the wall with me, it may not surprise you that I am still scratching my head about that low valuation…

If you are still interested, I reckon watching this video will be worth your time: