Finding the soft drinks companies with the most fizz

I know this is going to make me sound like an alcoholic, but I rarely drink soft drinks. When a reader requested an overview of the soft drinks sector, I was not, therefore, particularly enthusiastic.

For me, liking the product, or at least seeing its value, is a prerequisite for investment, and, on health grounds, I have not for a long time seen much virtue in soft drinks – even fruit juice.

Soft drinks are getting healthier, though, and there are some very good businesses making them. I have taken the blinkers off and cranked up SharePad to see if we can learn anything about UK listed soft drinks companies.

Fortunately, they are collected neatly into the Soft Drinks Subsector in SharePad:

A table of all shares listed on the London Stock Exchange (LSE) sorted by Subsector, reveals seven companies. Source: SharePad.

The biggest by market capitalisation is Coca-Cola European Partners, which is part-owned by the Coca-Cola mothership. It is the World’s largest bottler of Coca-Cola brands including British brands like Schweppes, which Coca-Cola bought from Cadbury in 1999, and Costa Coffee (in a can).

The company operates throughout much of Europe and earlier this year it announced the acquisition of Coca-Cola Amatil, another large bottler operating in Asia.

The size of one part of the Coca-Cola supply chain compared to some of the British soft drink companies in the list puts the market in perspective, particularly as the second largest company in the list is another Coca-Cola bottler, Coca-Cola HBC, which operates in Ireland, Eastern Europe and Russia.

Coca-Cola European Partners claims a 31% UK retail market share of Non-Alcoholic Ready To Drink (NARTD) beverages by value, and a 21% share by volume. 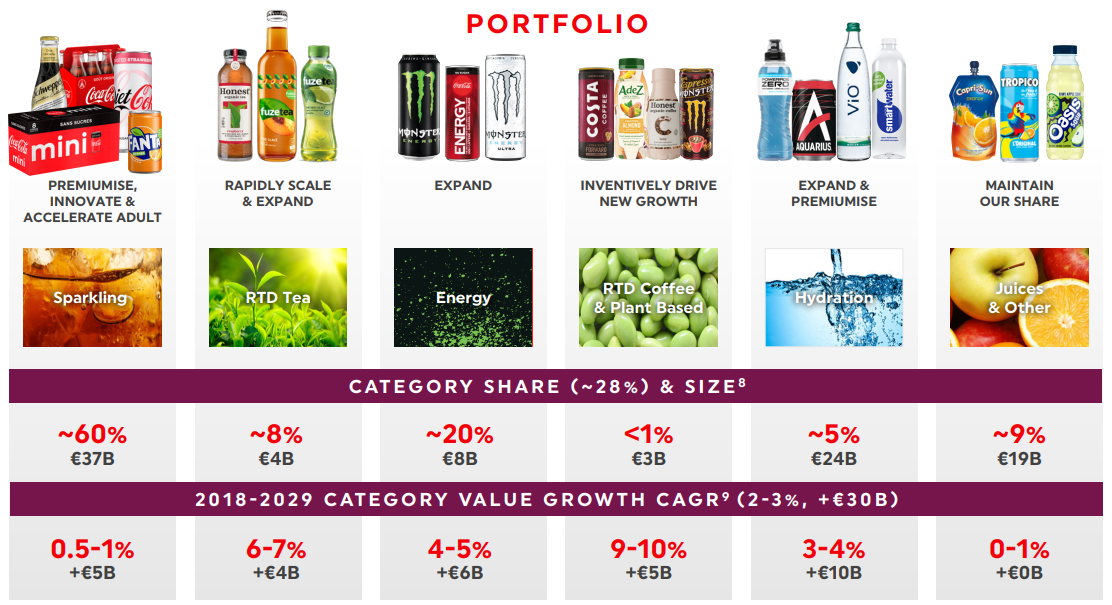 PepsiCo, the other soft drinks behemoth, does not have a listed presence in the UK, although Britvic bottles some Pepsi products like 7UP.

Britvic brings us to the smaller soft drinks companies with a distinctly British heritage, AG Barr, famous for Irn Bru, Nichols, famous for Vimto, Britvic, famous for J2O Tango, and Fever-Tree, which is focused on mixers for alcoholic drinks and is most famous for tonic water. 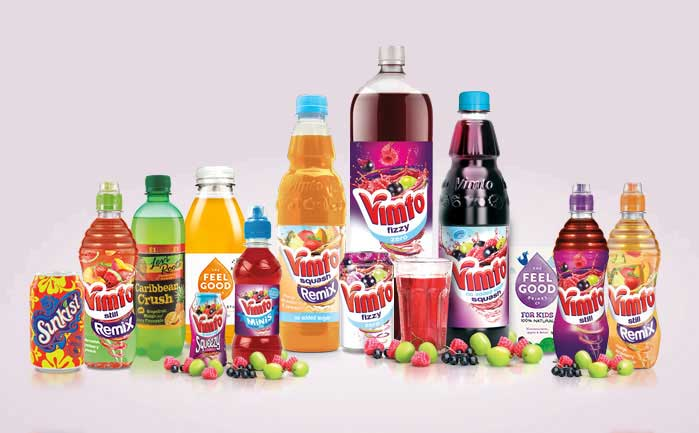 Nichols is dependent on its most famous brand, which comes in many varieties and is exported around the world. No prizes for guessing what it is. Source: nicholsplc.co.uk

AG Barr’s biggest brand is Irn Bru. Like Coca-Cola and Vimto, the formula is secret. It does not include girders though. Source: a.g.barr.co.uk.

Judging by SharePad’s description of Kakuzi, it is a ringer. Its claim to be in the soft drinks subsector probably rests on its status as a tea grower (as well as avocados, pineapples, macadamia nuts and livestock).

It is not the kind of soft drinks company I had in mind when I started out on this particular adventure.

Britvic owns an array of brands including Robinsons, J20 and R Whites. It also bottles Pepsi and 7UP in Britain and Ireland. Source: Britvic, Our Brands in Great Britain

I think we can put Kakuzi to one side, which means we are down to six London listed soft drinks companies.

Putting the remaining six shares in a portfolio makes the analysis easier. Then we can chart their characteristics using SharePad’s financial charting facility. 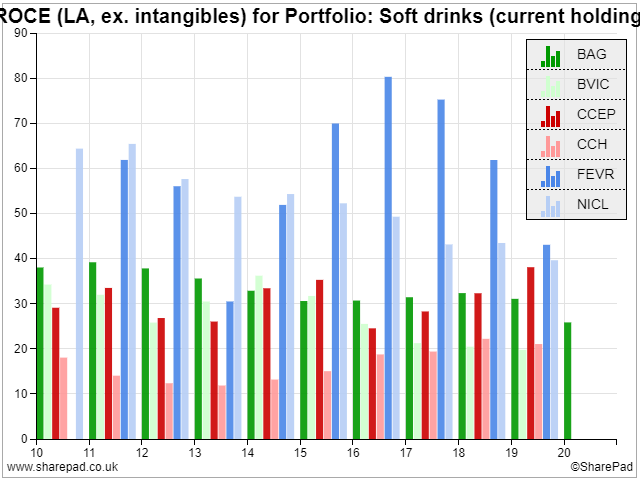 A financial chart showing returns on capital for each of the six companies in my Soft drinks portfolio. To compare all the companies in a portfolio using Financial charts, make sure the portfolio is active and select list instead of instrument in the row of buttons along the top of the chart.

I have reached for Return on Capital Employed because of all the statistics at our disposal, I think it tells us most about a business. The primary purpose of a for-profit business is to generate a return, profit, on the money it has invested, capital employed.

The more return on capital the better, as long as the company is treating employees, customers, suppliers and other people and organisations it comes into contact with well, so they will continue to help it earn outsized profits or at least not try and stop it.

In addition, I have chosen normalised, lease-adjusted return on capital employed excluding intangible assets. It is a bit of a mouthful, but these adjustments reduce disparities due to the way companies account for exceptional costs (and gains), how assets were financed, and whether they were acquired or developed internally. 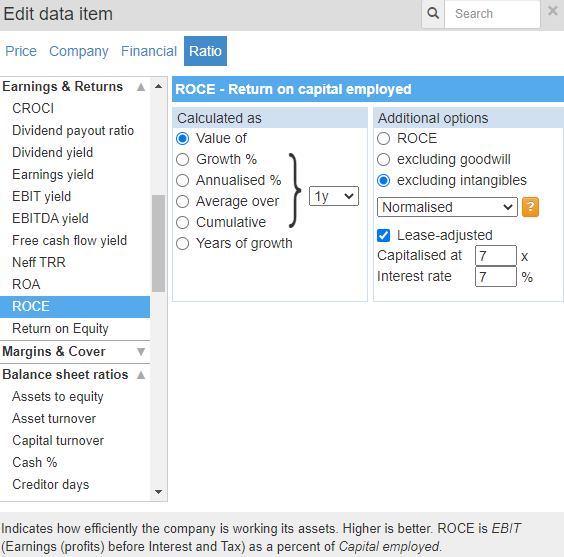 When we choose a data item, we must decide how it is measured. Source: SharePad

The greens, AG Barr and Britvic are no slouches, and the big surprise, to me at least, is the reds. Even the Coca-Cola bottlers earn decent returns on capital, especially Coca-Cola European Partners.

Considering Coca-Cola owns the brands you might think it would take much of the profit, but the relationship may be more equal than that. Given the scale required to bottle and distribute Coca-Cola across a continent, it is hard to imagine there are alternative bottlers Coca-Cola could just switch to.

The fact that Fever-Tree has achieved eye-popping rates of growth since it floated in 2014 in addition to being the most profitable soft drink company goes a long way to explaining its popularity among investors. The company has been profiled by two of my co-contributors at SharePad, Maynard Paton and Bruce Packard.

Otherwise, only Nichols has really grown convincingly, at an annualised rate of 3.3% above inflation over the period in question.

Historic growth in turnover is not the be-all-and-end-all. Companies can grow profit without growing turnover, and turnover can be reduced by divestments and improved by acquisitions which do not necessarily reflect how well a business is performing.

Nevertheless, if we are to invest in companies that have struggled to grow in the past, we need to understand the reasons why and what might change in the future. Though companies can cut costs to make more profit, it is hard to sustain profit growth for long periods of time without revenue growth.

Fever-Tree is a special case, a new premium brand that has piggy-backed on the popularity of gin and caught the public imagination. This may have allowed it to rise above wider trends holding soft drinks companies back.

It seems likely that the justifiable demonisation of sugared water because it rots our teeth and makes us fat has affected sales and forced soft drinks manufacturers to innovate products made from healthier ingredients. These formulations may not be as popular and as profitable as drinks pumped full of sugar have been.

There has also been an explosion in independent and supermarket own brands. People may be less loyal to big brands than they used to be, and while individually few of the challengers may grow to rival established brands, collectively perhaps they already do.

Investing for the future?

How brands respond to challenges like these will determine their suitability as investments for the future.

Though return on capital at Fever-Tree and Nichols, the companies that have grown profitably, has declined in recent years, profit margins have remained high.

That puts the spotlight on the other ratio that explains return on capital, the ratio of turnover to capital (capital turnover), which has declined. 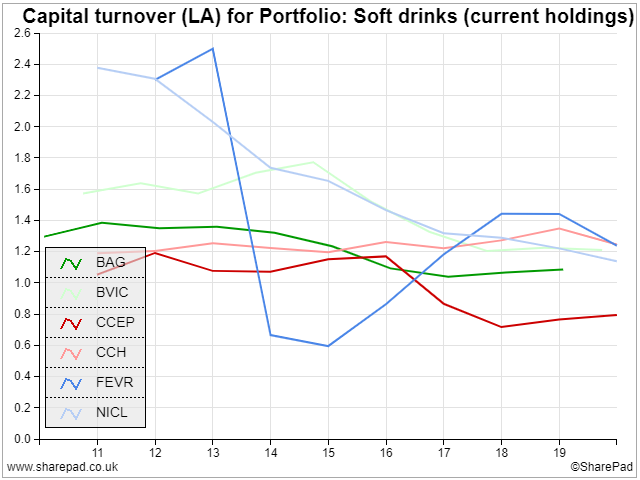 Return on capital is the product of the profit margin and capital turnover. For an explanation see this article on DuPont analysis.

It looks as though Nichols and Fever-Tree are using more plant and equipment to generate turnover and while it is disturbing to see any chart sloping downwards, this is not necessarily a bad thing.

Companies invest in new capital to increase capacity or provide the facilities to produce new products, which can reduce their capital efficiency temporarily.

Of course, there could be something else going on, but I find it somewhat reassuring that the companies that have grown and earned the highest returns appear to have increased investment.