Screening For My Next Long-Term Winner: AB Dynamics 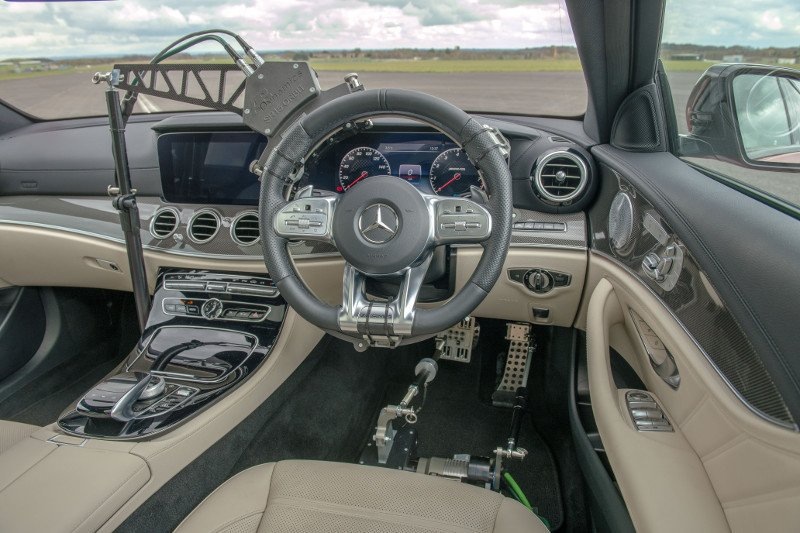 Amid the mayhem, I devised a straightforward screen. I simply looked for decent-sized businesses that were still expected to grow, paid a dividend and were conservatively financed, too

I applied the following criteria within SharePad to identify some respectable candidates:

I then ordered the shortlist based on how far each share price had fallen since its 52-week high. Would my filtering reveal any bargains? 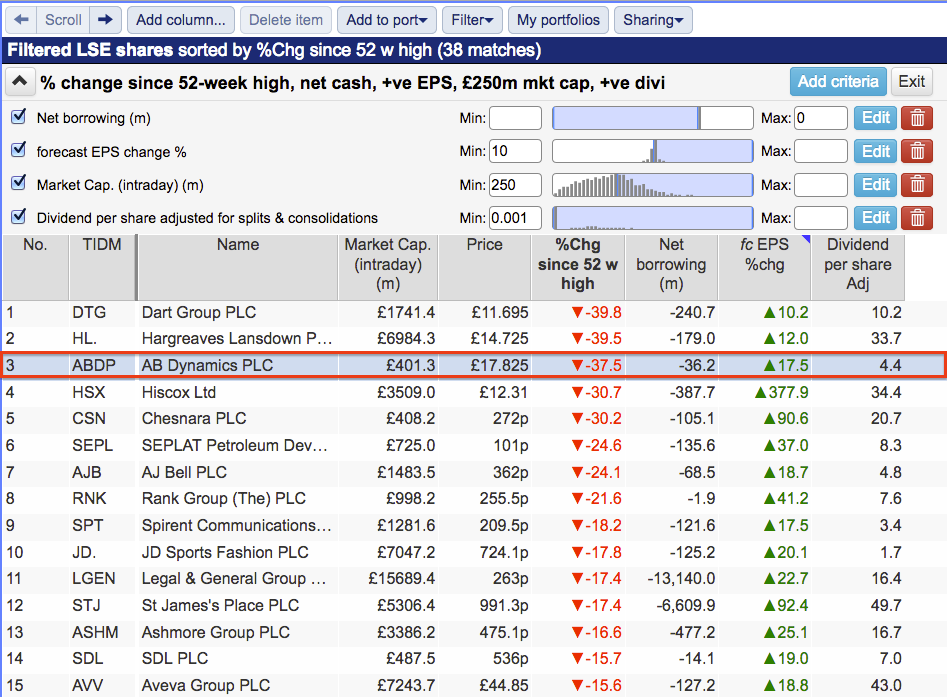 (You can run this screen for yourself by selecting the “Maynard Paton 11/03/20: AB Dynamics” filter within SharePad’s awesome Filter Library. My instructions show you how. If you need to add a ‘%chg since 52 w high’ column, follow the following instructions:

I selected AB Dynamics because, of the names on my shortlist, the company’s shares had fallen among the furthest from their 52-week high.

I also knew AB possessed a reputation for ‘business quality’ and felt the company was not in the direct firing line of current global events.

The chart below confirms AB’s share price has tumbled 38% since the £28.50 52-week high registered during November: 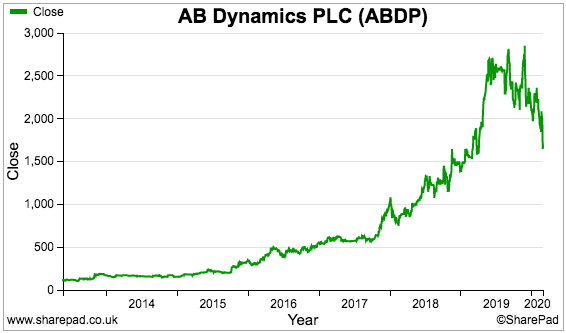 Let’s take a closer look at what’s going on.

The business of AB Dynamics

Initially an engineering consultancy that served clients such as McLaren, Jaguar and Land Rover, AB Dynamics started designing and manufacturing vehicle test equipment during the 1990s.

Mr Best’s breakthrough product was the ‘suspension parameter measurement machine’, or SPMM, which “measures the kinematic and compliance characteristics of vehicles by employing a method of moving the vehicle’s body in a manner that simulates the real motion of a vehicle on the road.”: 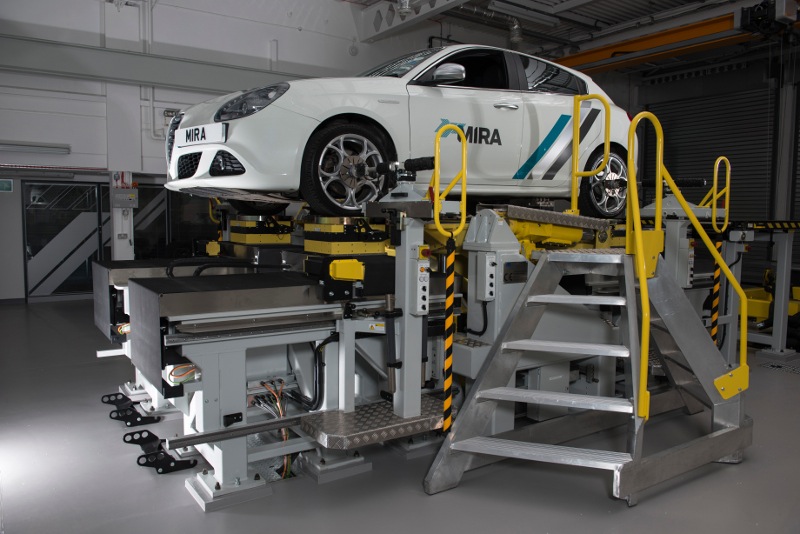 You can see an SPMM in action by watching this Youtube video.

SPMMs essentially test whether new vehicles are dynamically sound and safe to drive by applying a combination of roll, pitch, bounce and yaw motions.

Key features for customers include “unrivalled” measurement accuracy, bespoke configurations and an extended lifespan — the very first SPMM is still operational 25 years on.

New safety regulations, the advent of electric cars and the development of semi- and fully autonomous vehicles have all sparked significant demand for the group’s products and services.

Other customers include regulatory laboratories, test-track operators and start-up developers of self-driving vehicles. 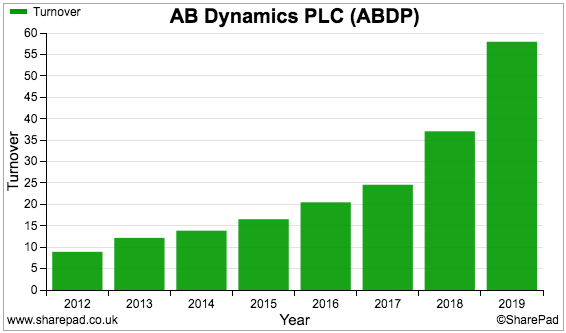 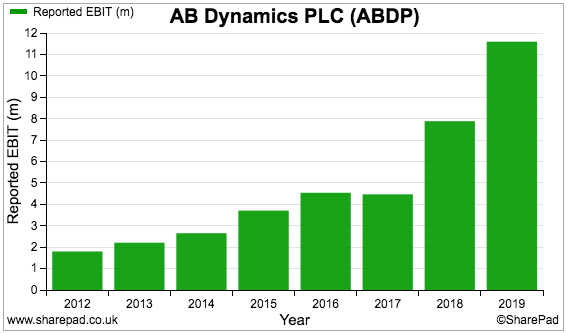 The shares joined AIM at 86p and faithful shareholders have since seen their investment rise 20-fold — even after the aforementioned 38% tumble. A handful of dividends have also been paid. 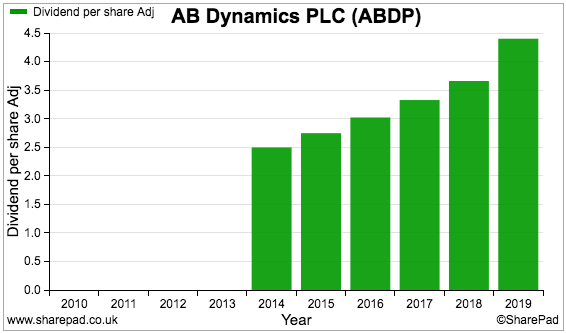 AB’s annual reports show sales of equipment used for track testing — driver robots and so on — have supported the group’s wider performance: 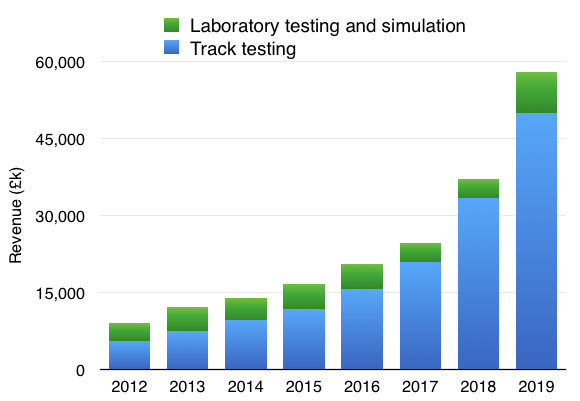 Sales of equipment used in laboratories — such as the SPMMs — have bobbed around the £4 million mark for some years now.

Bear in mind AB serves a relatively small customer base and product sales can be low in number and high in value. The company sold its 1,000th driving robot during 2019 — 20 years after selling the first one.

The 2013 flotation document disclosed the price of an SPMM was approximately £2 million and said driving robots could sell for between £70,000 and £300,000. At the last count, AB’s largest customer represented 6% of revenue. 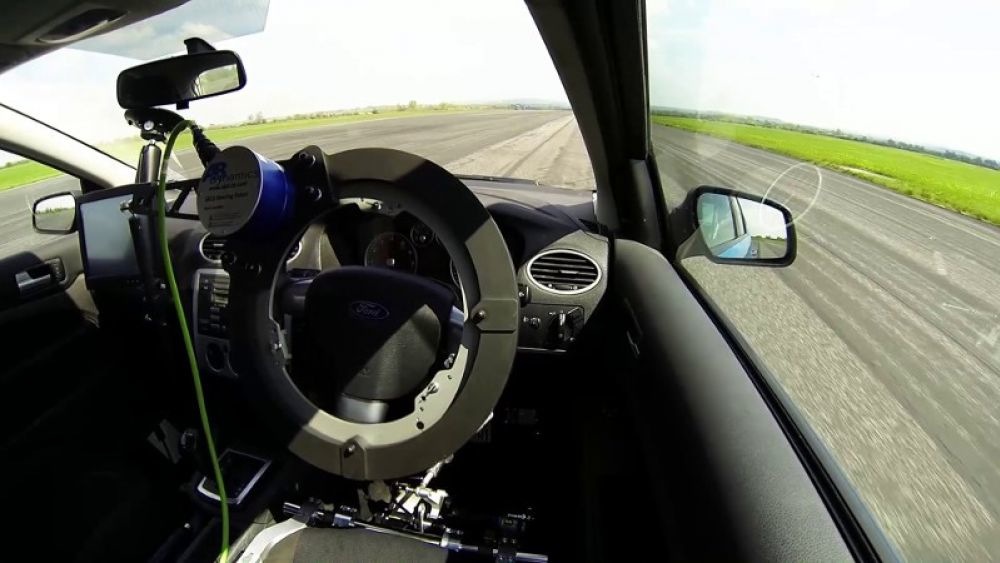 The SharePad Summary for AB Dynamics is shown below: 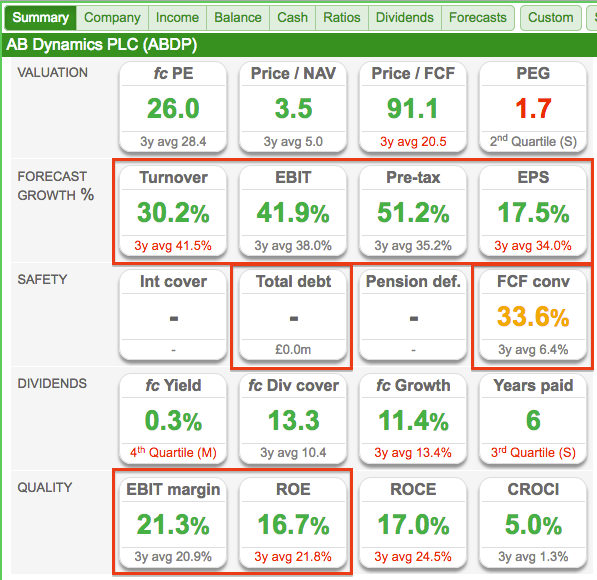 The main points of interest include:

Let’s start with the cash conversion. 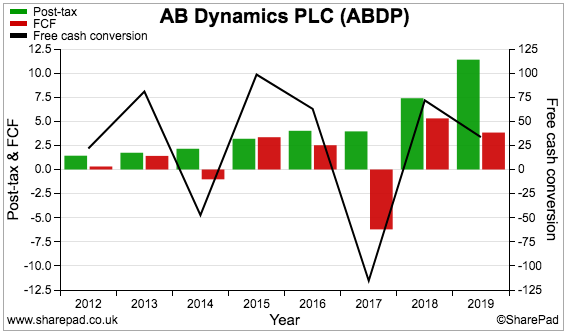 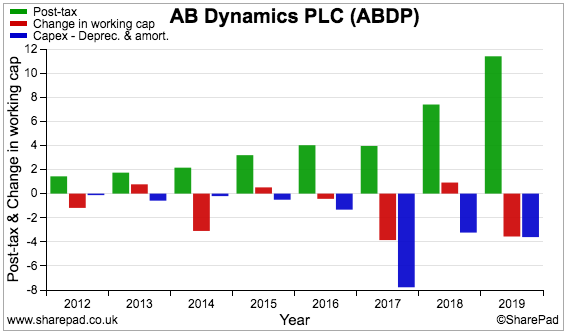 SharePad’s Cash tab shows a net £6.5 million has been absorbed into stocks, debtors and creditors during the last five years:

Mind you, that £6.5 million does not seem a bad investment given reported operating profit has advanced from £4 million to £11 million during the same time. 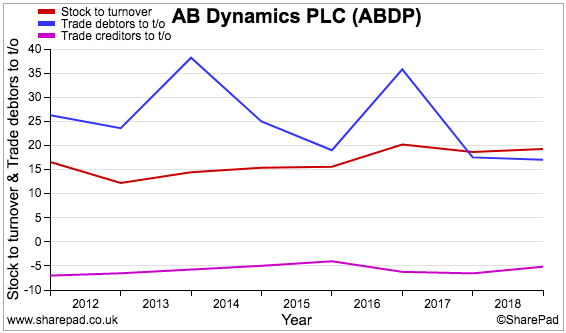 Stock (red line) moving from 15% to 20% of revenue implies a lot of components sit in AB’s factory.

Meanwhile, trade debtors (blue line) fluctuating between 20% and 35% of revenue suggests customers may not always be that timely settling their bills.

The power of SharePad allows us to put those working-capital ratios into greater perspective.

This next chart compares AB’s stock-to-revenue ratio (black line, blue circle) to nine other shares I have reviewed for SharePad: 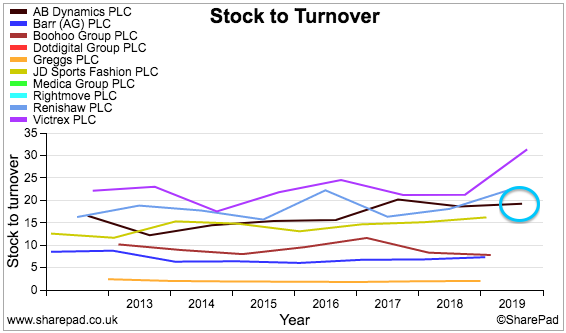 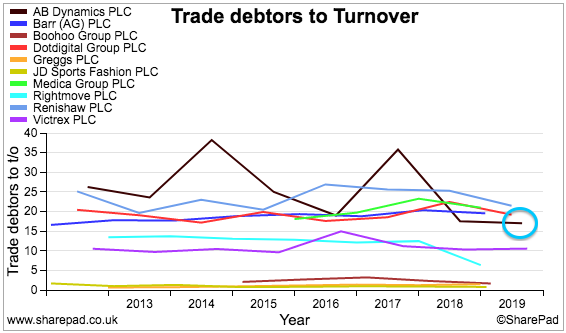 While AB is not the worst offender within this small survey, the business does seem to operate with a relatively high level of working capital.

The ideal situation of course is to carry as little stock and possess as few trade debtors as possible — that way, the risk of stock becoming outdated and bills going unpaid is lower.

Divide £11 million by £24 million and then multiply by 365 days, and the business seems to operate with five months’ worth of materials and components in hand.

Some machines take AB more than a year to build. At least customers pay a deposit and make staged payments until the order is ready.

Capital expenditure and cash in the bank 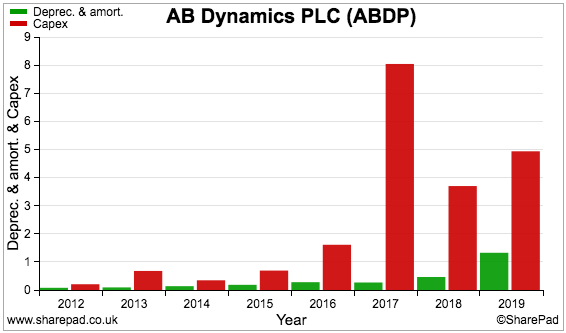 Back to the Cash tab and, during the last five years, we can determine ‘excess’ capital expenditure of approximately £16 million has not been charged against earnings as depreciation or amortisation: 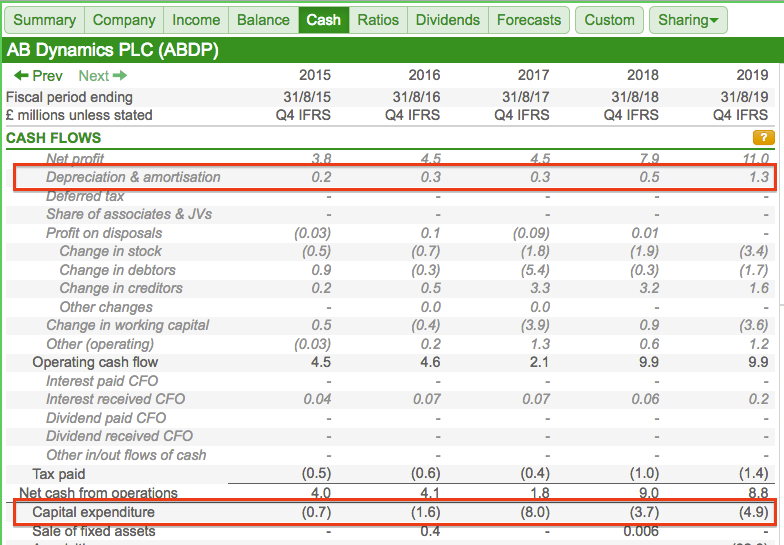 Another trip to the annual report — this time to double-check whether profits have been deliberately flattered by an inadequate depreciation policy.

Note 12 reveals most of AB’s tangible assets are represented by land and buildings: 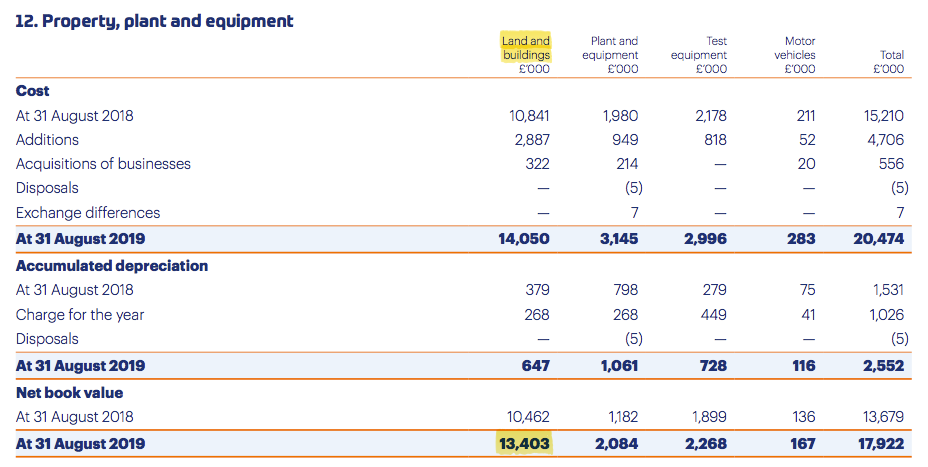 Previous annual reports indicate some £14 million has been spent on new sites and buildings since the flotation.

Such assets tend to hold their value over time, and therefore AB’s low depreciation charge simply reflects the fair ‘wear and tear’ of its non-property assets.

Despite the notable working-capital investment and significant capital expenditure, cash in the bank has soared while borrowings have not been required: 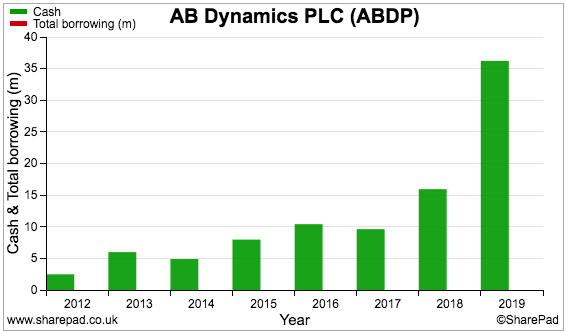 Top marks for anyone thinking the high cash balance is odd given AB’s free cash conversion has not been that great.

The bank balance was in fact bolstered last year by a £50 million share issue (blue bars), of which a net £33 million was spent on acquisitions (red bar): 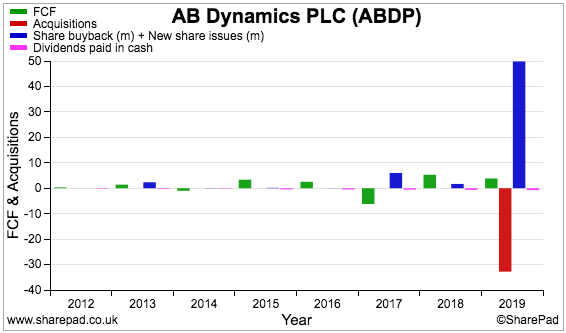 Substantial acquisition activity can often lead to shareholder trouble, so let’s take a closer look at the purchases.

Last year AB bought rFpro, a developer of driving simulation systems, for an initial £18 million. The valuation was not cheap given rFpro enjoyed sales of £4 million and a profit of £1 million at the time of purchase.

AB said at the time that rFpro was a “current supplier to the Group, providing a key element of our advanced Vehicle Driving Simulator (“aVDS”) product line, the Board believes the Acquisition will provide security of that supply chain and secure our competitive advantage.”

I understand AB paid the high price because management was worried this key supplier could be acquired by somebody else — which perhaps tells you something about the quality of rFpro’s software.

AB’s latest City presentation indicated rFpro’s software would be used in part to hasten the development of driverless cars — testing for which on public roads is restricted: 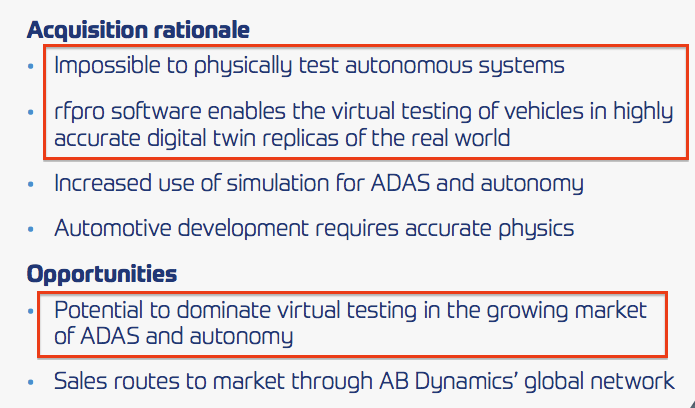 AB acquired Dynamic Research, a manufacture of vehicle testing systems, for an initial $21 million. Again the purchase was not a bargain, given this US firm enjoyed sales of $14 million and a profit of $4 million.

AB said at the time that Dynamic Research would provide a “sales and engineering facility in a strategically important territory close to both automotive OEMs and autonomous vehicle developers”.

The facility in question is a test track near Bakersfield, California, which is approximately 250 miles from the headquarters of Apple, Google and Tesla — all of which are in someway involved in developing next-generation vehicles.

I understand AB has used the services of Dynamic Research for years, so the new subsidiary is not completely unknown.

I also understand the purchase reflected AB’s deliberate plans for US expansion — having technical expertise ‘on site’ is now becoming almost mandatory for assisting customers in the States and elsewhere.

All told then, the two acquisitions were familiar to AB and the business logic appears strategically sound. The risk of integration troubles therefore seems low.

Margin, ROE and sales per employee 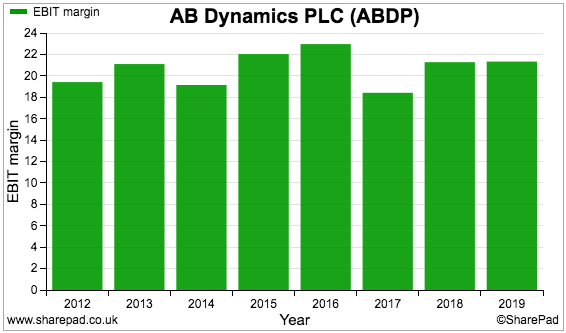 Return on equity at almost 17% for 2019 is satisfactory, too, although this ratio has reduced over time due to the aforementioned property expenditure and acquisitions: 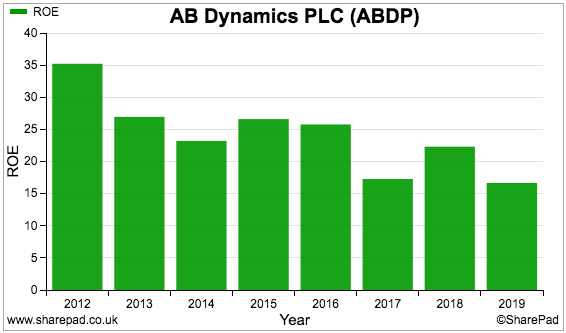 A very good sign for shareholders is AB including ROCE (return on capital employed) within its key performance indicators: 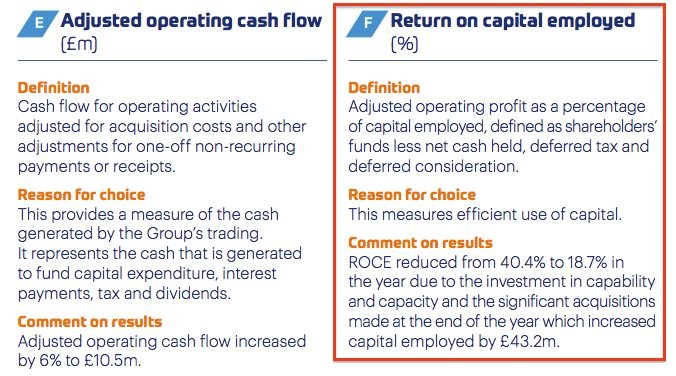 This KPI suggests AB’s management ensures reinvested profits — as well as that £50 million raised for acquisitions — are put to good use.

Founder Anthony Best probably keeps the executives in check with his ‘owner’s eye’. The 82-year-old Mr Best is the non-exec chairman and controls a 27% family shareholding with a £100m market value.

I must add that my SharePad chart collection has highlighted AB’s appealing sales-per-employee calculation: 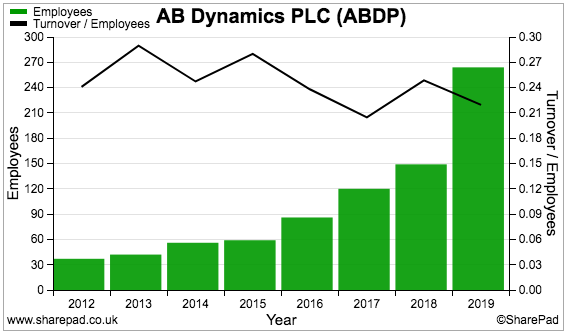 Revenue of more than £200,000 per head is another measure that implies AB develops high-value products.

Without major benefit from those acquisitions, revenue surged 56% and allowed adjusted profit to soar 58% and the dividend to be raised 20%.

The figures were ahead of earlier market expectations, due in part to “favourable” market conditions that were “driven by significant structural and regulatory tailwinds”.

Mr Best’s verdict on future trading was positive but realistic:

“As in previous years, we have a healthy order book that provides good forward visibility and will continue to invest in our capabilities and infrastructure which will tend to constrain our margins. Whilst we remain optimistic about our prospects and the Group’s future, we do remain alert to the continued difficulties faced by many of our customers selling into the global automotive market.”

City analysts have translated that outlook into some extremely healthy forecasts for the next year or two:

I should add that the £18 million pre-tax profit forecast for 2020 has been rising for some time: 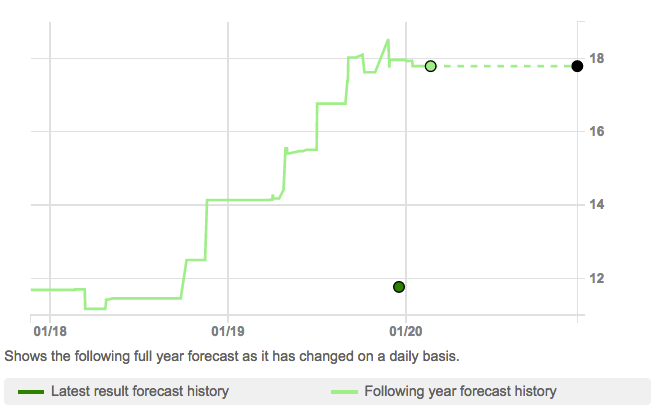 I must now finish this write-up on a disappointing note — AB’s 38% share-price tumble has not yet put the valuation into obvious bargain territory. The trailing P/E is 30: 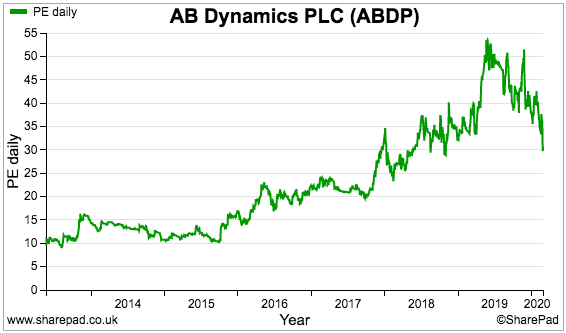 Making a ‘buy’ case for AB would have been much easier before 2016 when the trailing P/E was less than 15.

Still, the multiple based on earnings currently expected for 2020 is 26 — which may not be completely outrageous if AB can enhance its competitive position and remain a vital supplier within the booming vehicle-testing industry.

Disclosure: Maynard does not own shares in AB Dynamics.