Screening For My Next Long-Term Winner: JD Sports Fashion 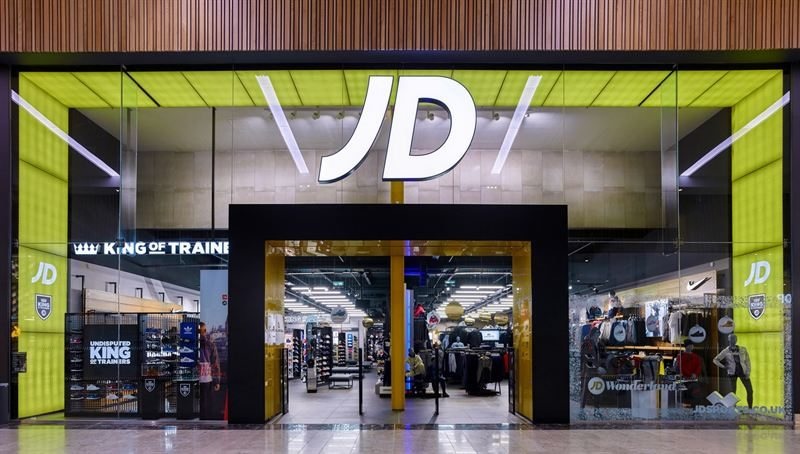 Today I am revisiting the share screen that pinpointed Games Workshop back in January.

…and I wonder whether the same screen can unearth another promising opportunity.

To recap, the exact criteria I am re-using are:

1) Annualised earnings per share growth of at least 25% during the last five years;

3) A dividend yield greater than zero;

5) Not a member of the Home Construction sub-sector.

This time the screen returned 26 matches: 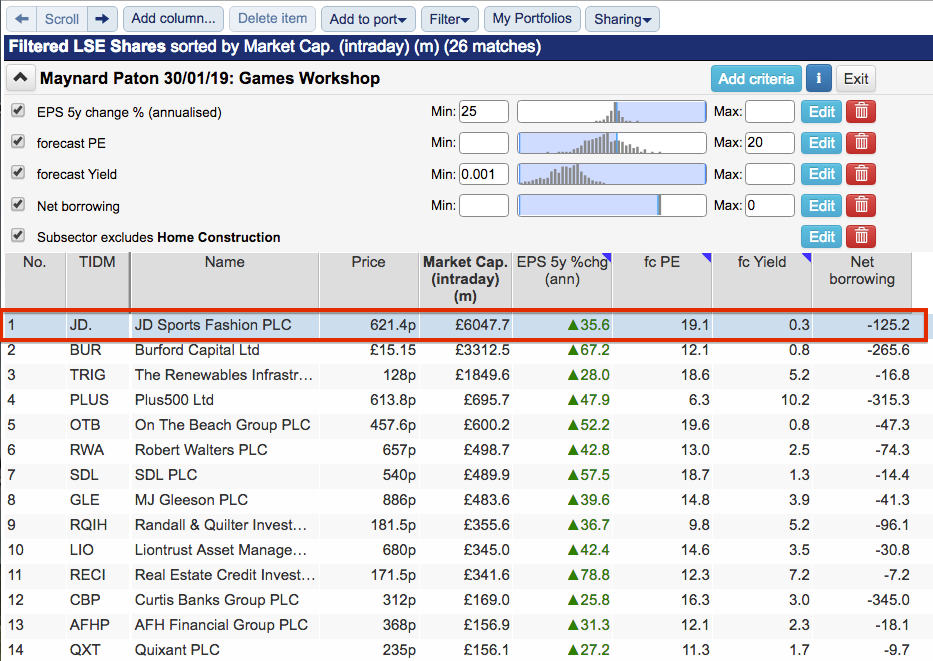 (You can run this screen for yourself by selecting the “Maynard Paton 30/01/19: Games Workshop” filter within SharePad’s fantastic Filter Library. My instructions show you how.)

I plumped for the largest on the list — JD Sports Fashion. 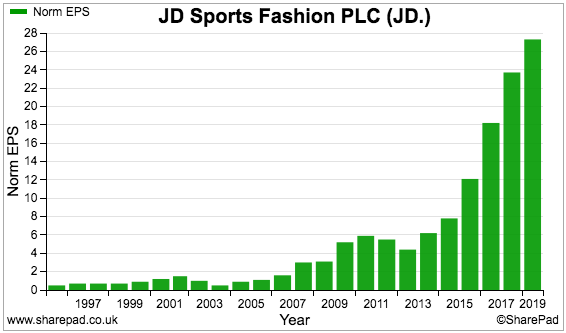 Let me explain more about the company and its rapid earnings expansion.

The history of JD Sports Fashion

The ‘JD’ in JD Sports Fashion — John Wardle and David Makin — opened their first sports shop in Bury during 1981.

Initially selling sports equipment, the store changed tack when the then 18-year-old Mr Makin recognised the growing popularity of sports brands through their association with hip-hop music:

The rest of the 1980s saw Mr Wardle and Mr Makin open shops around Manchester and the Midlands that were dedicated to selling clothes and trainers from the likes of Nike, adidas, Reebok and Puma.

By the time JD floated in 1996, the chain operated 46 outlets and — bolstered by numerous acquisitions — the group today boasts more than 2,400 retail locations throughout the UK, Europe, Asia and the United States. 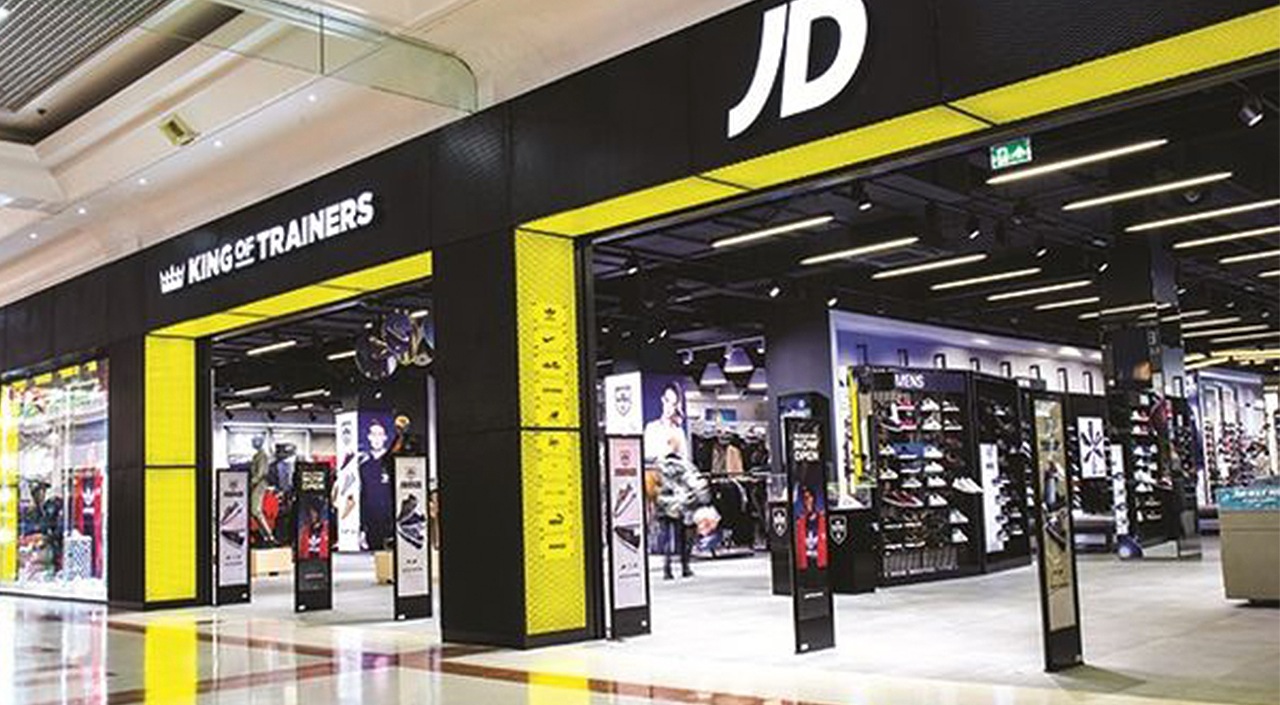 My chart below shows the scale of JD’s store expansion: 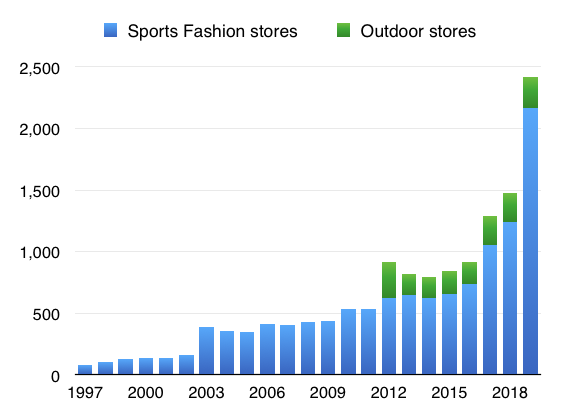 All the extra shops have propelled revenue, operating profit and the dividend higher — especially during the last five to ten years: 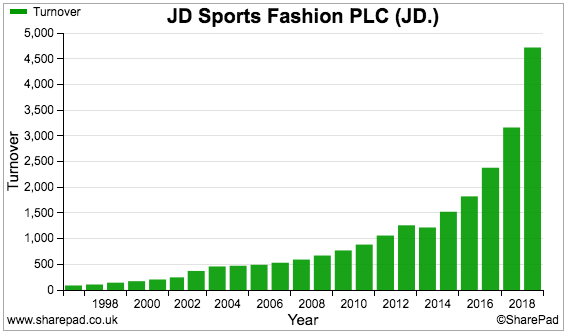 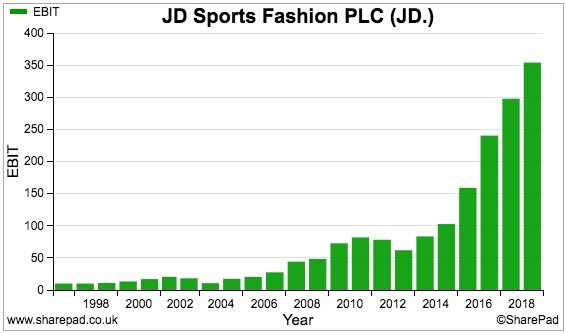 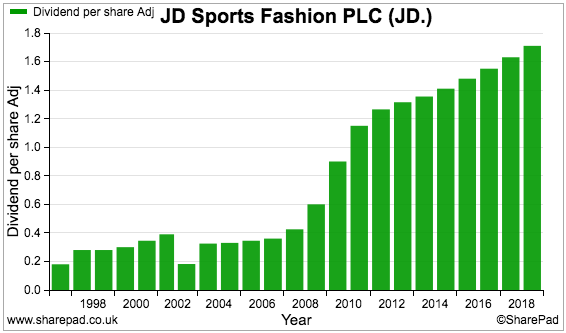 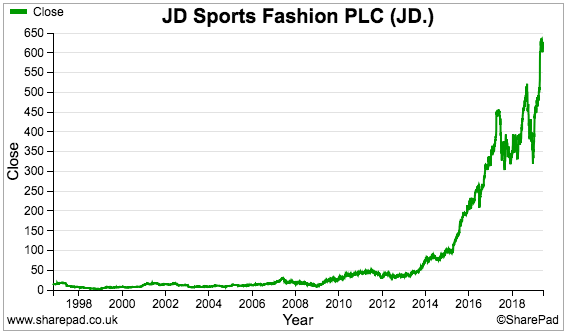 Anyone buying at the 14.25p flotation price has since recorded a 44-fold return. (The 2008 banking crash offered the chance to buy at 9p and enjoy a 69-fold profit.)

Somewhat remarkably, JD’s £6 billion market cap now exceeds the valuations of both Marks & Spencer and J Sainsbury, and allowed the company to enter the FTSE 100 index earlier this month.

However, these days JD’s chairman describes the plan using a few 2019 buzzwords:

“We provide a compelling differentiated proposition to the consumer with an attention-grabbing theatre both in stores and online. Consumers expect our product and brand mix to be emotionally engaging, exclusive and continually evolving with high levels of social-media penetration and an increasing pace of technology adoption across our core demographic ensuring that new styles and trends spread rapidly across a wide geography.” 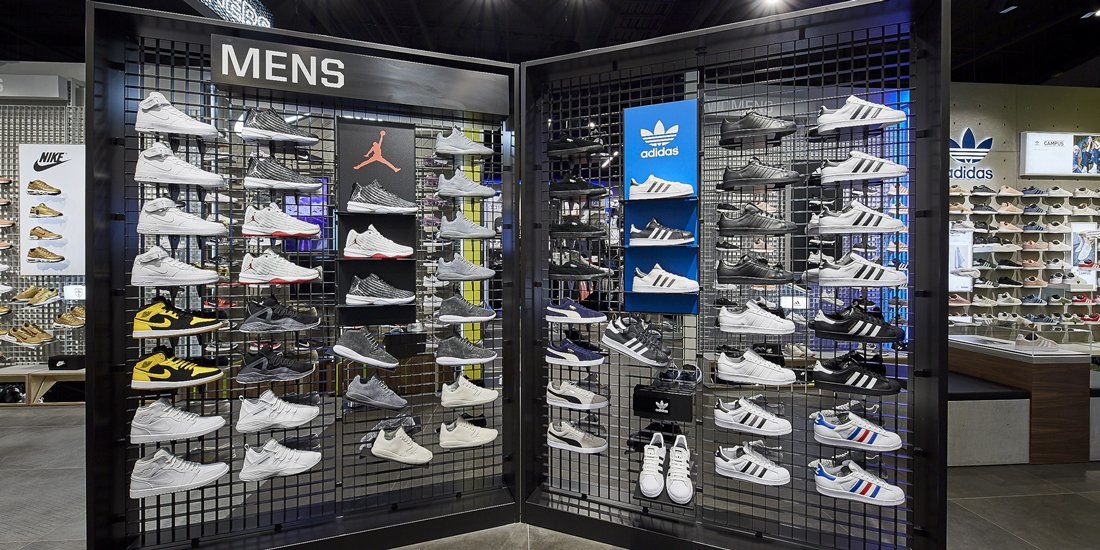 JD’s annual report reveals Nike and adidas to be the group’s major suppliers. The report also mentions JD’s desire to become a brand’s “partner of choice” and to obtain “as much exclusive product as possible”.

JD’s other strategy involves buying struggling or sub-scale rivals, and to then improve their margins through greater buying power.

For example, the group recently paid £90m for Footasylum — a business ironically established by the aforementioned Mr Makin — following a very short and difficult stint on the stock market: 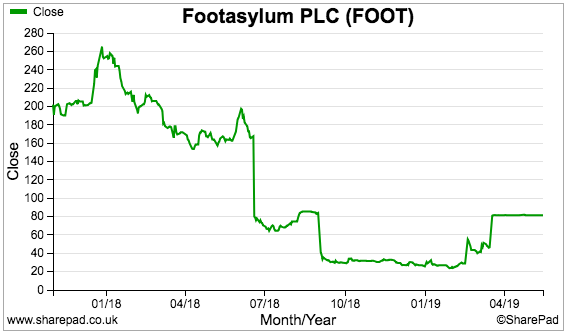 JD believed there would be “significant operational and strategic benefits from a combination of the two businesses.” 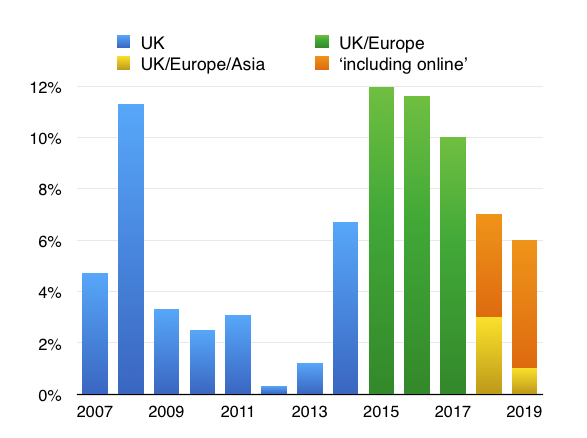 (Like-for-like sales reported by retailers are an important measure for investors. They represent the underlying turnover improvements at established shops and can indicate whether the retail format remains popular or not. Declining or negative like-for-like sales could mean fading popularity.)

JD’s like-for-likes are not the easiest to interpret because of the group’s overseas expansion.

Prior to 2015, JD reported only UK like-for-like sales growth (the blue bars in the chart above).

The European stores clearly bolstered the group’s progress during 2015, 2016 and 2017. However, the notable decline to 1% during 2019 appears worrying.

As well as like-for-like store sales, JD now declares a figure for “overall like-for-like growth, including online”, which for 2019 was 6%.

I am not entirely sure of the merits of amalgamating online sales with shop sales to arrive at a like-for-like calculation.

That said, the lines between the high street and online are becoming increasingly blurred. I am sure some of JD’s online sales are generated because of the presence of the stores. 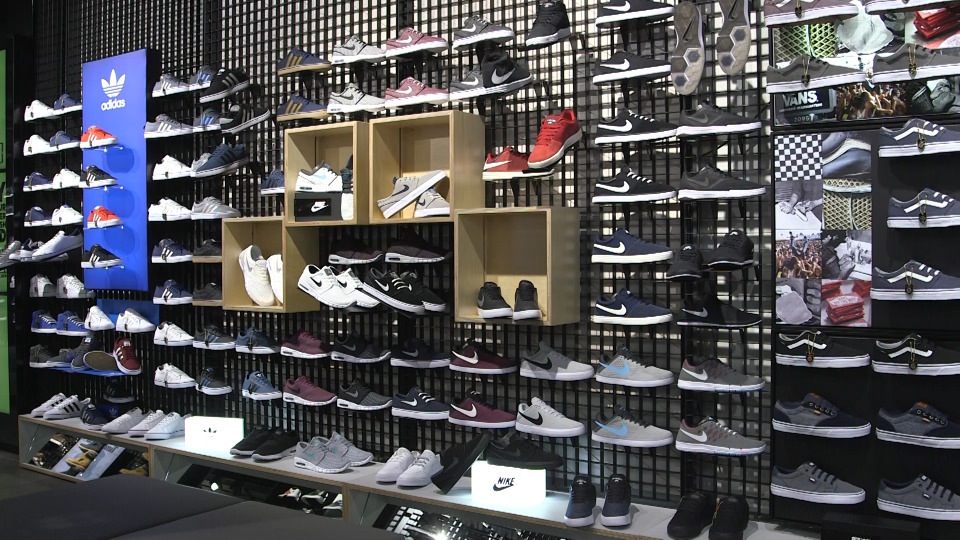 As well as the online complication, JD’s like-for-likes include the group’s Outdoor division — which has suffered various difficulties of late.

Throw in JD’s geographical diversity, too, and arguably the reported like-for-likes may not be a reliable guide as to how the most profitable parts of the group are progressing.

However, sales per square foot of retail space have remained around £550 during the same time. 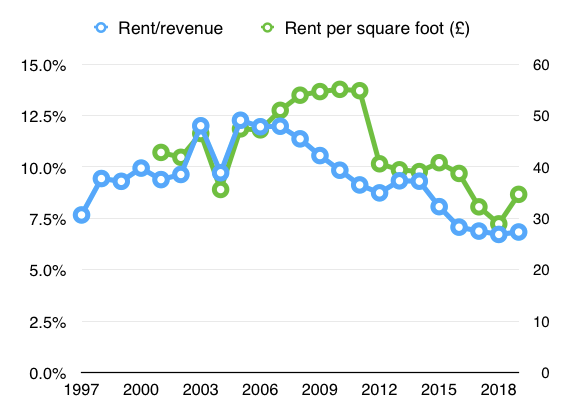 The amount JD spends on rent…

1) as a proportion of revenue (blue line, left axis), and;
2) per square foot of retail space (green line, right axis)

The declines could be due to reduced rents from UK landlords and/or expanding overseas where rents may be lower.

Either way, my chart suggests the store estate has been managed very well — especially given how crippling leases have caused calamities at the likes of Carpetright, Debenhams and Mothercare.

The extent of any company’s lease obligations are always disclosed within the annual report.

Here is the relevant accounting note for JD:

The group is contracted to pay future rents of £1.6 billion.

Dividing £1.6 billion by £322 million implies JD’s average rent agreement lasts only for five years. Back in 2008 the calculation was almost nine years.

For some context, the same calculation for Next — regarded by many as the benchmark for retail-sector quality — is 7.5 years. 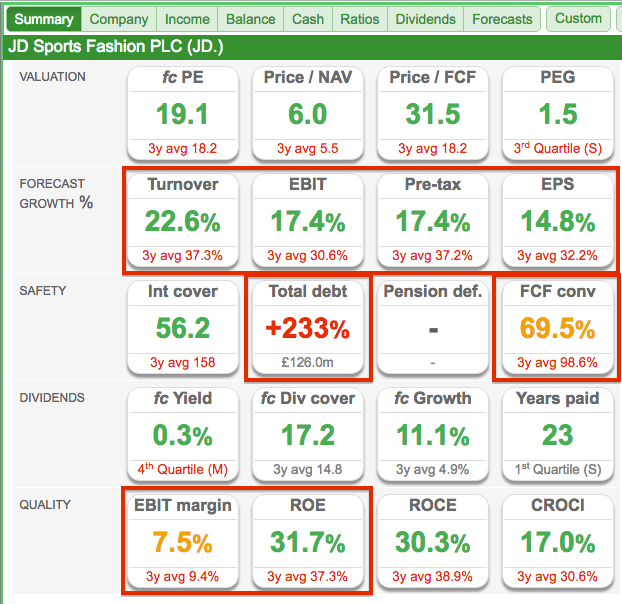 The following points interest me:

1) Revenue, profit and EPS are all expected to advance notably (second row);

2) Debt has surged while earnings have not converted very well into free cash (third row), and; 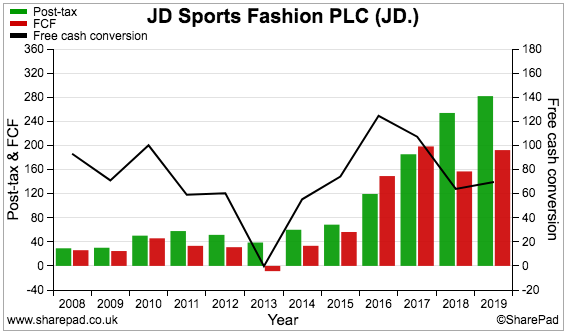 JD regularly spends more on capital expenditure than the associated depreciation charged against earnings. This ‘surplus’ capex is represented by the negative blue bars below: 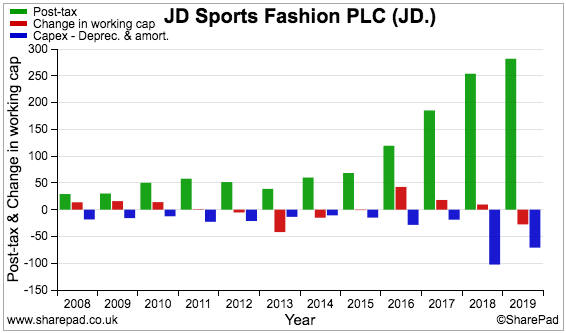 The ‘surplus’ capex has certainly increased of late. The expenditure mostly funds ‘fixtures and fittings’, which have been needed to furnish a new warehouse and revamp stores acquired recently in Europe and the States.

This next chart emphasises the sums spent on acquisitions (red bars): 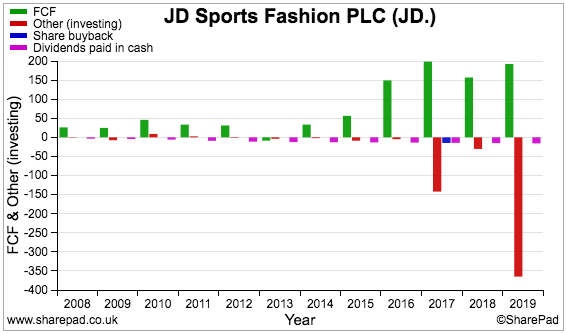 JD’s entire free cash for 2017, 2018 and 2019 was spent buying other companies. Last year’s expenditure caused cash levels to drop and debt to leap: 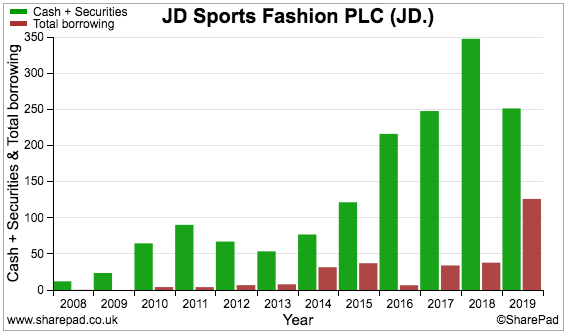 I must add that JD’s £125m net cash position reflects the group’s ‘negative’ working capital — whereby ordinary customers pay JD at the time of purchase while JD pays its creditors (such as suppliers) some time later.

At the last count, JD carried a huge trade-creditor balance of more than £800m (red bars): 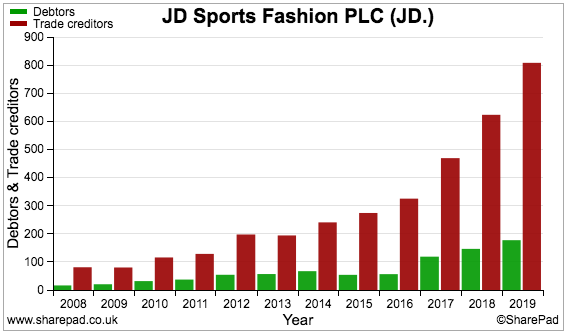 I am very encouraged by JD’s working-capital management: 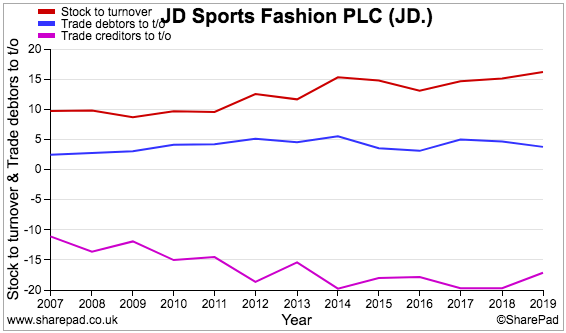 The group’s stock, debtor and creditor levels as a proportion of revenue have remained remarkably consistent — despite every opportunity for mishaps following all the store openings and acquisitions. 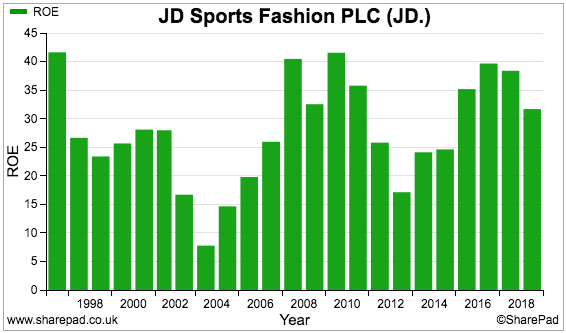 Returns on equity have generally exceeded 20% and have topped 30% for the last few years. 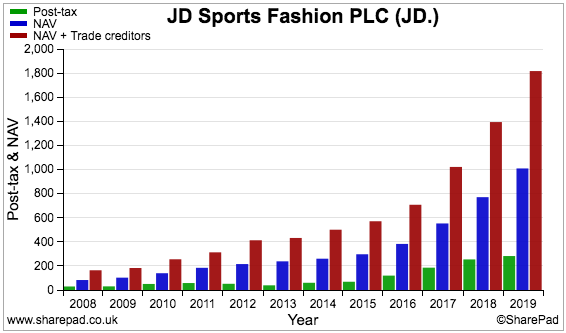 Without the advantage of the trade-creditor balance, JD’s earnings (green bars) would have represented between 15% and 20% of the enlarged equity base (red bars). 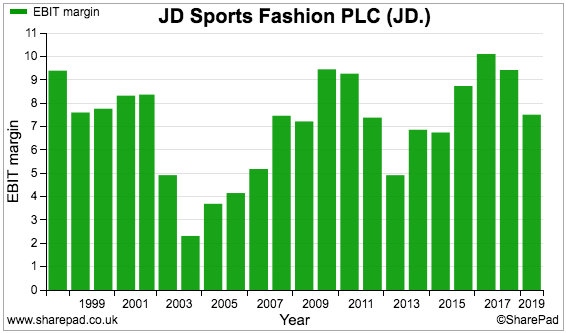 I dare say the likes of Nike and adidas do not allow retailers much room for extra profit.

The main Sports Fashion division recorded an 8.5% margin during 2019, and the figure has bobbed between 7.5% and 11.2% during the last decade.

The Outdoor division has in contrast lost money during six of the last eight years. 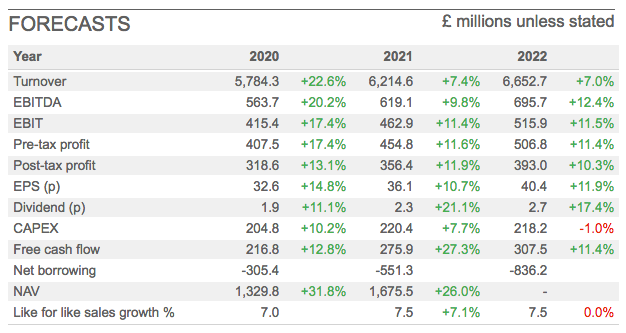 The purchases of Finish Line and Footasylum have influenced the projections for 2020.

The 2019 annual report claimed a full-year contribution from Finish Line would have delivered total revenue of £5.2 billion:

Sales at Footasylum were £200m or so before its acquisition, which gets us to £5.4 billion.

Now to the profit forecasts — which are not so straightforward.

However, JD’s pre-tax profit would have been £319m — that is, £21m lower than the £340m actually reported — had Finish Line been owned for the full year:

I guess owning Finish Line over the profitable Christmas period — and missing out on some of the earlier, slower months — has caused that discrepancy.

I can only assume major margin improvements are expected at Finish Line, Footasylum and the Outdoor division between now and the January 2020 year-end.

This 57% stake must be among the best investments ever made on the London stock exchange.

Pentland acquired most of its shares at 11p during 2005 — and has since witnessed the price surge nearly 60-fold to create a £3.4 billion shareholding. (The sellers were JD founders Mr Wardle and Mr Makin.)

Pentland is a sports brand business that hit the big time in the 1980s with a $77,500 investment in Reebok that was eventually sold for $770 million. Today the group’s main brands include Speedo, Berghaus, Mitre and Ellesse.

The owners of Pentland, the Rubin family, clearly know something about sportswear and investing. As such, I wonder whether JD’s success has been due mostly to Pentland’s influence. A Rubin family member is a JD non-exec.

JD’s executive chairman should be applauded, too. In charge since 2004, Peter Cowgill has overseen the group’s rapid expansion and rocketing share price.

Mind you, not everyone is happy with Mr Cowgill’s £2m-plus a year salary and bonus: 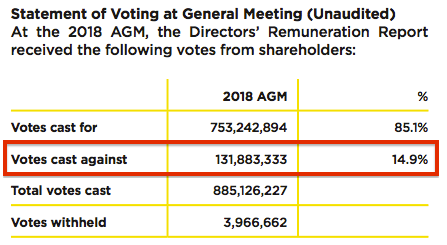 I would argue few executives have created as much market value as Mr Cowgill during the last 15 years.

Who would have thought a small chain of sports shops could one day enter the FTSE 100 and surpass the market cap of Marks & Spencer?

Just as astounding, JD’s success has been achieved during a time when numerous retailers have collapsed due to online competition and onerous rents.

I can’t really fault JD’s past, which is perhaps why the shares trade at 19x forecast earnings for 2020.

But JD is not perfect. Niggles include:

* A liking for exceptional items: JD has declared one-off costs every year since 2003. I calculate such charges typically represent 6% of pre-exceptional profit, and;

* Questionable Outdoor returns: Buying Blacks and Go Outdoors for a combined £132m has led to a £28m cumulative divisional loss.

In addition, the purchase of Finish Line concerns me on the following grounds:

* Size: The £401m cost is substantial in comparison to JD’s earnings;
* Location: The US is frequently a graveyard for UK retailers;
* Profitability: The annual report small-print about Finish Line is confusing, and;
* Directorate: JD’s finance director of 15 years retired four months after the deal.

Still, the Finish Line acquisition was rubber-stamped by both Pentland and Mr Cowgill — and disputing their track records is not easy.

Disclosure: Maynard does not own shares in JD Sports Fashion.