Screening For My Next Long-Term Winner: Avon Rubber 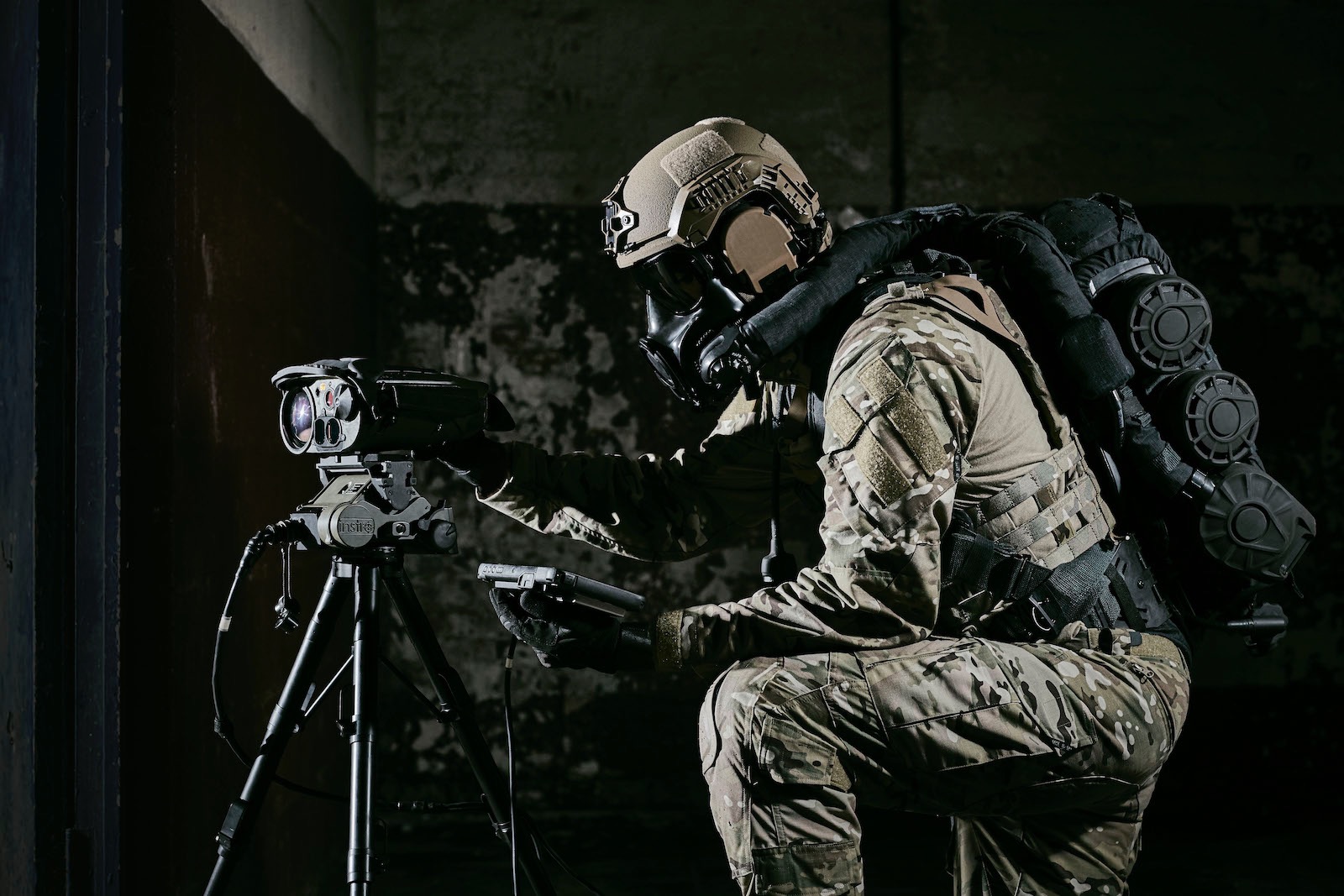 I trust SharePad will help bring you good fortune in what could be another twelve months of financial thrills and spills.

As usual I plan to trawl the market for interesting shares that I hope assists your company analysis and stock-picking.

I start the year with Avon Rubber, a FTSE 250 member that has rewarded shareholders handsomely since 2009 but recently experienced a trading wobble.

Avon Rubber appeared on my radar after I re-ran a previous SharePad screen. The same filters identified AB Dynamics during March and this time gave me 24 candidates to choose from.

The criteria I re-employed were:

The premise was to hunt for decent-sized businesses that were expected to grow, were conservatively financed and paid a dividend…

…but with a share price well off the 52-week high: 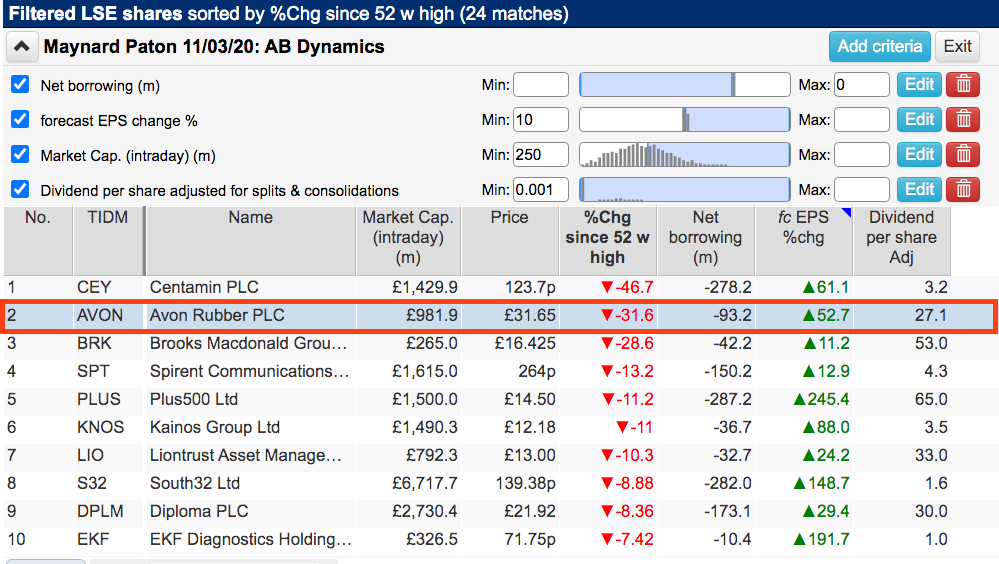 You can run this screen for yourself by selecting the “Maynard Paton 11/03/20: AB Dynamics” filter within SharePad’s awesome Filter Library. My instructions show you how.

To then sort on the percentage change from the 52-week high, add a column with the following settings: 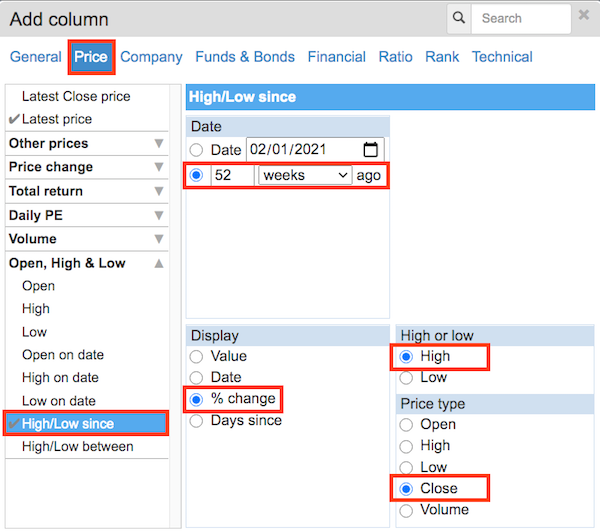 Among the shares identified were CMC Markets, Games Workshop, Plus 500 and Polar Capital.

I chose Avon because I was vaguely aware of:

A glance at the price chart confirms Avon has been an incredible performer since the banking crash: 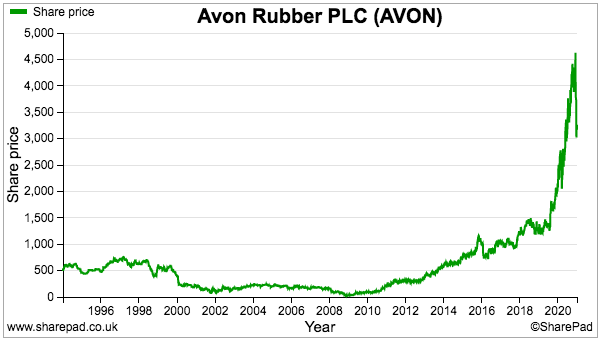 The price at the December 2008 low was just 25p. Last year the shares briefly surpassed £46 to register an astonishing 184-fold return.

Avon Rubber was established during 1885 in a cloth mill on the banks of the River Avon in Wiltshire.

Initially manufacturing bicycle tyres and conveyor belts, the business supplied 20 million gas masks during the war and developed diving suits and inflatable boats during the 1950s.

During the 1990s, sales approached £350 million and profit topped £25 million. The financial history then became rather complicated as the group undertook numerous disposals, which included selling the prominent Avon Tyre brand.

By 2007 turnover was less than £50 million — a level first achieved during the early 1970s. A century of making rubber tubes for milking machines came to an end last year with a further sale that raised £160 million. 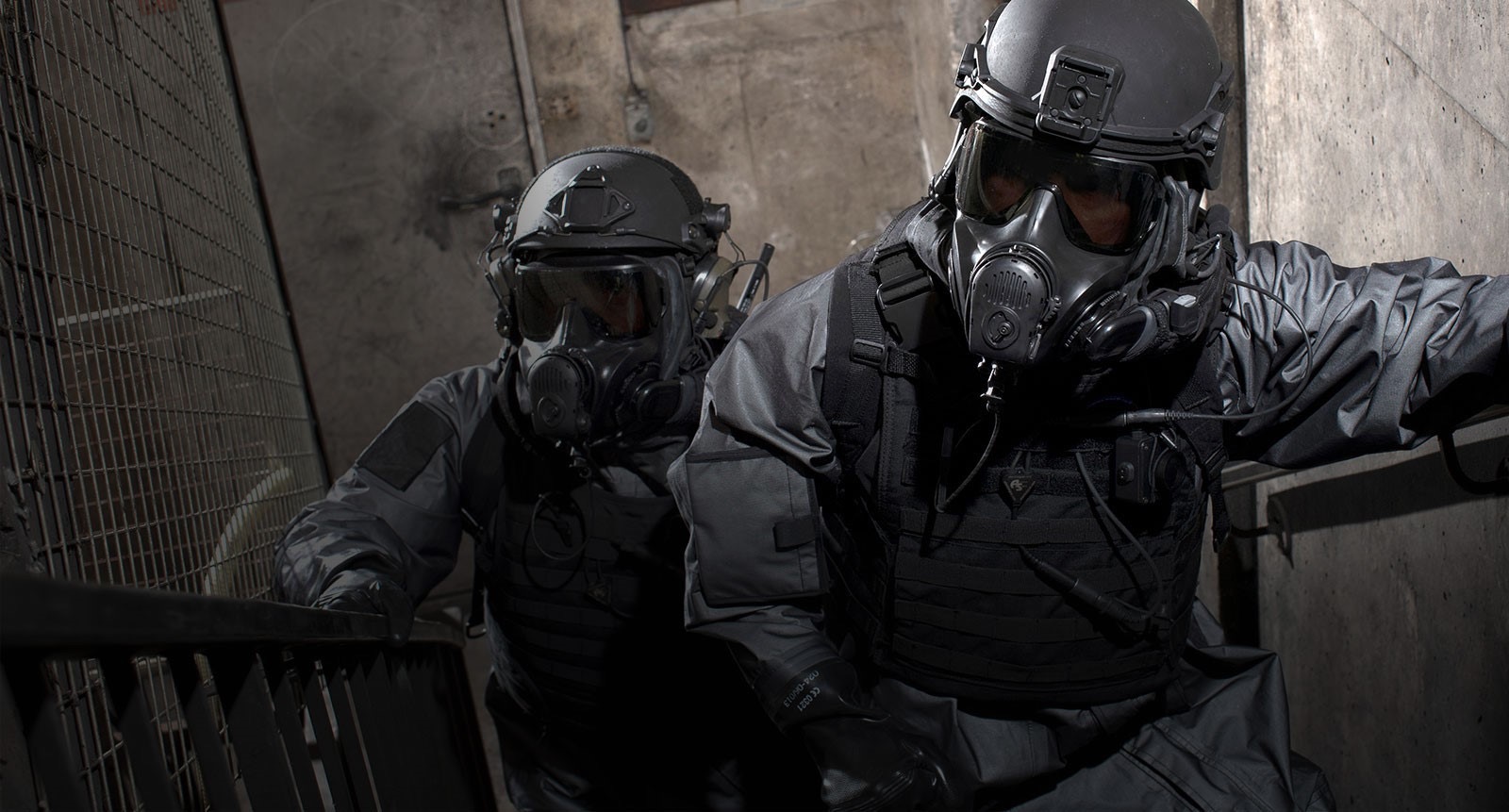 Avon today is a leading supplier of masks, helmets, body armour and breathing equipment for the military and emergency services. The group’s predominant customer is the United States Department of Defense, which accounted for 57% of Avon Protection sales during 2020: 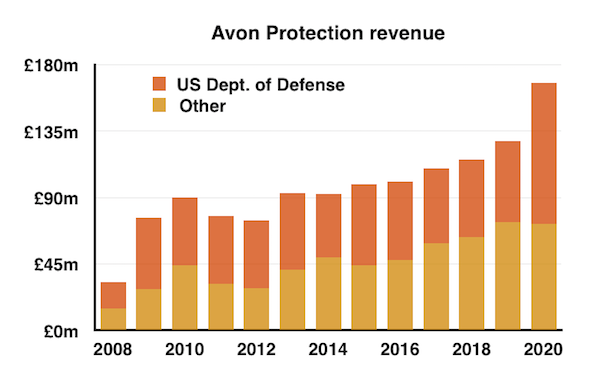 The foundations of the meteoric share price were laid during 2000, when Avon was chosen by the Department of Defense to develop the M50, a general purpose ‘respiratory protection’ mask for the American armed forces: 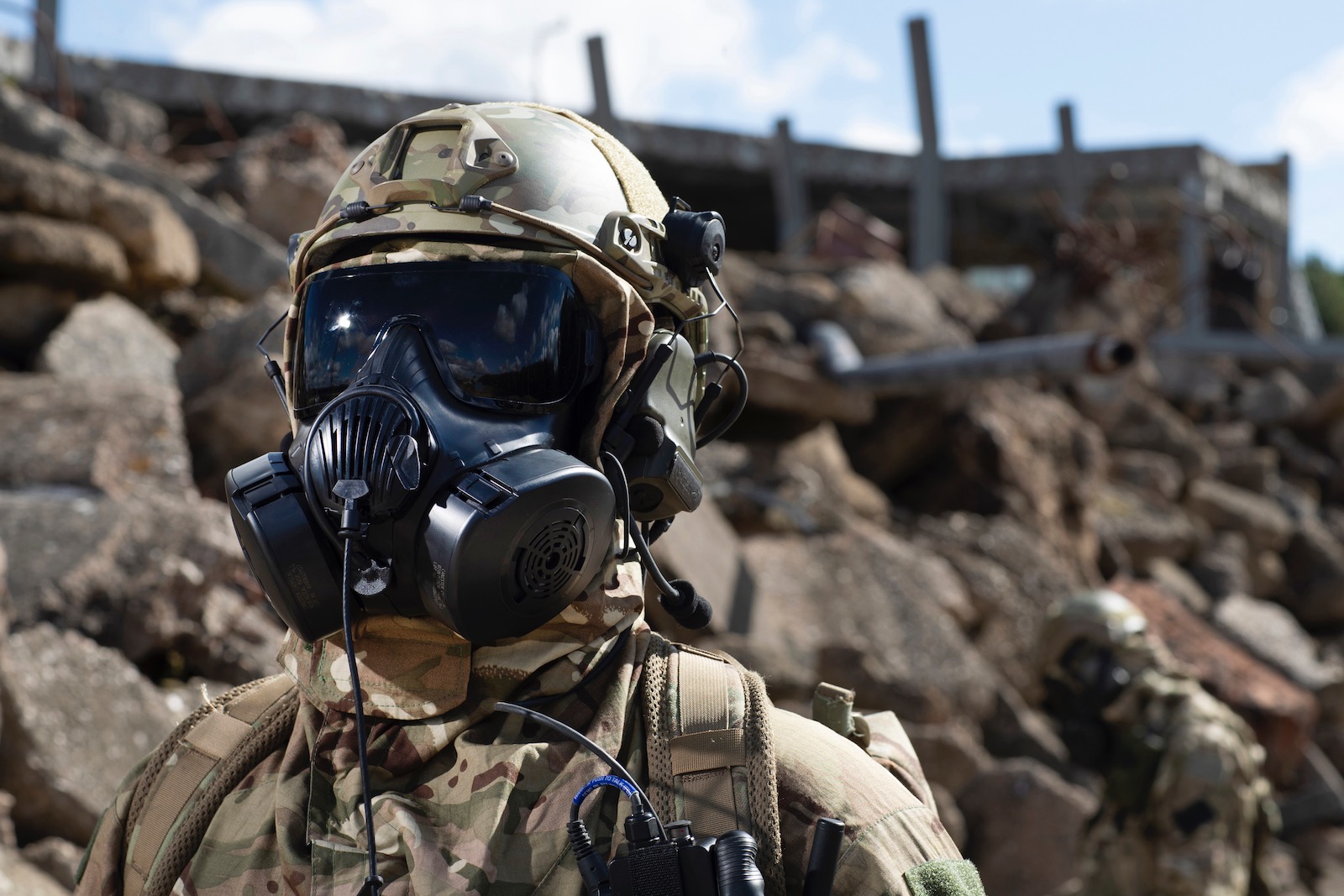 The M50 went into production during 2008, with Avon enjoying an initial five-year contract worth $112m to supply 100,000 masks a year. The contract was quickly extended to ten years and was recently renewed for another five.

More than two million M50s have been sold to date and encouragingly for shareholders, the masks go on to generate additional revenue from replacement filters and other servicing. Avon claims the M50’s lifecycle may last a further 20 years:

Avon’s product range now includes specialist masks for aircrew as well as self-contained breathing equipment. One notable contract is a ten-year agreement with NATO for the supply of FM50 masks and associated air systems, spares and accessories:

Avon’s disposals have created a convoluted financial history blighted by regular restatements and adjustments (five-year total: £56 million!). The SharePad charts below show the ups and downs to revenue and profit: 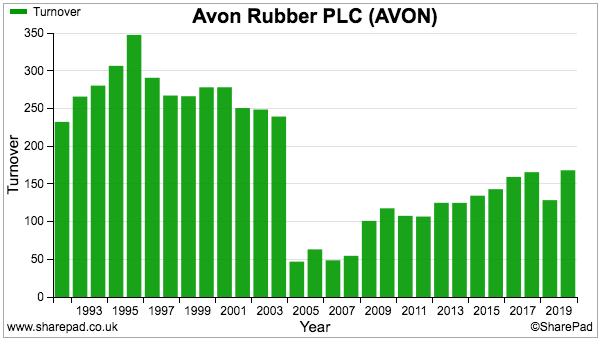 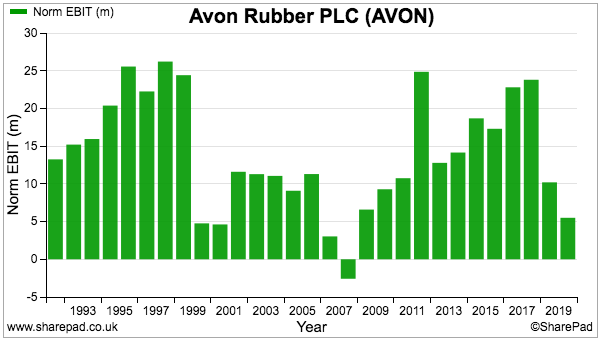 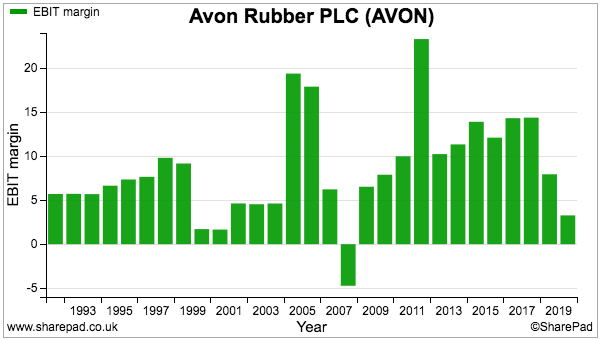 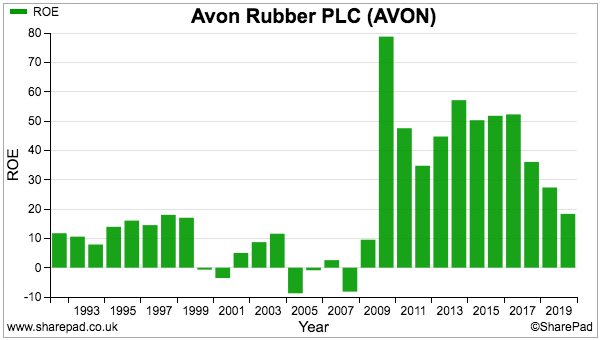 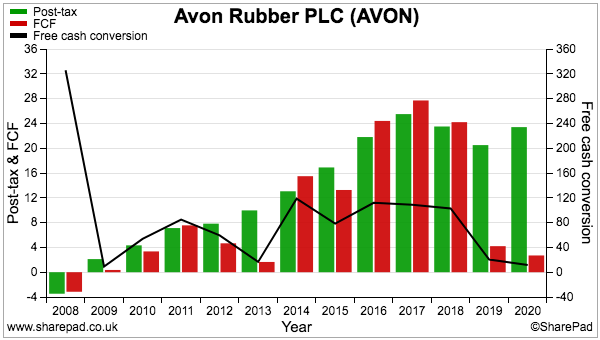 The saving grace among the headline figures is the dividend. The payout has displayed a lovely upward trend since 2009, which implies the subsequent corporate re-jigging has been effective: 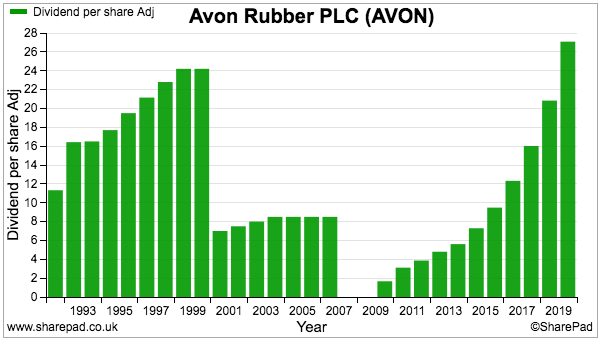 Given Avon has been a pure ‘protection’ business since only September, interpreting the group’s past accounts in any depth is unlikely to lead to precise conclusions. 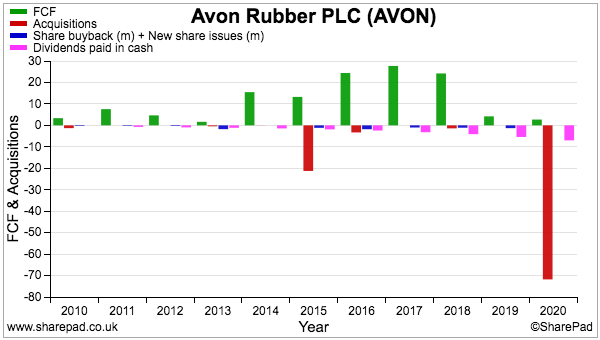 …and significant acquisitions are always worth double checking.

Avon purchased the ‘ballistic-protection’ division of 3M at the start of 2020. The group paid an initial £71 million for this specialist manufacturer of military helmets and body armour.

Avon said the purchase was “backed by proprietary technology, established contract platforms and well invested manufacturing operations” and would “significantly strengthen our technology and our personal protection product offering to an enlarged customer base, thereby accelerating the long-term growth prospects for the Group.”

The deal was certainly substantial, with the initial cost more than twice the group’s £30 million adjusted operating profit.

What’s more, Avon’s 2020 results documents do not suggest the acquisition will enjoy increased orders during the next few years.

You see, this former 3M division generated revenue of $85 million during 2018…

The 3M deal also included a possible earn-out based on future revenue:

I interpret this annual report small-print as saying Avon will pay an additional £15m if total three-year sales from the former 3M division reach $241 million.

Other concerns with this former 3M division include:

Suffice to say I would be investigating this acquisition further if I were an Avon shareholder.

The acquisitions continued during September when Avon spent £100 million buying Team Wendy, a US manufacture of helmets and helmet liners for military and emergency-services personnel.

The price paid was again significantly higher than the group’s £30 million adjusted operating profit… and this time annual revenue acquired was running at only $44 million. At least Team Wendy’s profit was a very healthy $12 million.

Excluding the 3M deal and Team Wendy acquisition, Avon’s military (and similar) revenue for 2020 was $162 million.

$291 million is towards the bottom of that $275-415 million range for future annual orders.

As such — and assuming order intake translates roughly into revenue — the powerpoint projection indicates Avon should see its top line expand over time.

But that upper $415 million annual order projection may take some time to achieve.

You see, the group’s target for organic sales growth is only 3%-plus:

And the 2020 results said Team Wendy revenue for 2021 would grow “in line with our investor proposition of 3%+ per annum”.

For extra perspective, organic sales growth for 2020 was only 0.1%.

And don’t forget that annual report small-print, which implies the acquired 3M ballistics division will not enjoy significant extra revenue for the next three years.

“Following the awards of contracts for the U.S. Defense Logistics Agency Enhanced Small Arms Protective Inserts (“DLA ESAPI”) and U.S. Army Vital Torso Protection (“VTP”) body armor plates, we have been engaged with these customers to complete the necessary product approval processes, which had been expected to conclude in the first half of FY21.

Disappointingly, these approval processes have been delayed as a result of a failure encountered in First Article Testing. Whilst we remain confident of completing these processes and are working with our customers to expedite the approvals, this initial delay means that first deliveries under these contracts are now expected to commence in the first half of our 2022 financial year.”

The earlier results said the delayed contract possessed a maximum value of $333 million over a maximum three-and-a-half-year duration.

Whether this contract delay is just a blip or an early warning of further trouble is hard to say. Either way the financial impact is unclear because the forecasts within SharePad seem odd:

Estimated turnover of £248 million for 2021 presently equates to approximately $335 million — much higher than my earlier $291 million run-rate calculation including both acquisitions.

The earnings per share numbers appear ambitious, too. Adjusted EPS was 77p for 2020, and doubling to 151p by 2023 feels very unlikely to me.

Not helping matters is Avon switching its reporting currency from GBP to USD from this year. I do wonder if the City consensus reflects an erroneous mix of GBP- and USD-based forecasts.

The currency switch just adds to the analysis headache with this share after all the acquisitions and disposals.

But concentrate only on the 2020 results and accept the adjustments (of £24 million!), and Avon seems a worthwhile business.

Last year both the adjusted operating margin and adjusted return on capital employed were very healthy at approximately 23%. The group’s own cash-conversion calculation was a welcome 123% as well.

Perhaps such robust ratios are to be expected when the business develops specialist, life-preserving equipment — for which competition is limited and contracts are often awarded on a sole-supplier basis

The appealing competitive position has encouraged investors to re-rate the shares significantly: 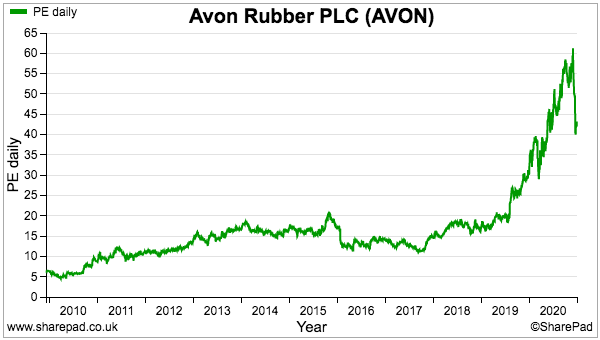 For years the company was valued at 20x earnings or less. Now the trailing P/E is 42x.

I must confess the immediate valuation feels very cheerful given:

Remember, the original M50 contract with the US military was for $112 million over five years…

Disclosure: Maynard does not own shares in Avon Rubber.