Last week the FTSE recovered to just over 6000. The (perhaps inappropriately named) Bond film No Time to Die, was postponed until next year by its Hollywood studio, MGM, which has left cinemas in trouble. Cineworld is on the brink, a victim of an overly leveraged balance sheet but no product to distribute. Up until Covid cinemas were supposed to be a stable cash cow compared to the highly unpredictable business of making movies where most films lose money (just 3% are hits according to Art D’Vany), but the few like Titanic, Star Wars or the Bond franchise are so wildly successful they make up for all the losses. Hence Cineworld’s management could leverage the stable, recession proof cashflow, at the risk of a low probability catastrophic event. Cineworld has $8.2bn in net debt (versus a market cap of £400m) and the shares are down 81% since the end of February this year, as Michael Taylor pointed out earlier this week: the chart looks “grim”. https://knowledge.sharescope.co.uk/2020/10/07/the-trader-a-look-at-the-hospitality-sector/

A key beneficiary is Netflix, which reports later this month (20th October) and has both original content and distribution. However Netflix is already trading on a P/E of 90x and a Price/Sales of 11x. Thinking more laterally, we are also likely to see the virus benefit other businesses with internet distribution. UK computer games expenditure rose by more than 70% during lockdown from mid-March to the start of July, according to analysis from Cardlytics.

Last week a couple of computer games companies reported (Codemasters) or did investor presentations (Sumo Group). Like litigation finance I think computer gaming is a sector that many people put in the “too hard” pile, but it’s worth following because investors can enjoy huge, a-symmetrical returns when things go well. One of my favourite books is Hollywood Economics by Art D’Vany. The top 20% of films earn 80% of revenue according to D’Vany. When it comes to Hollywood films there is statistical self-similarity (kurtosis, power laws, pareto distributions) whether what is measured is work, revenue, actors’ pay or profit the distributions look the same. I suspect that computer games reveal similar “winner takes almost all” statistical distributions.

But I start with another company that has benefited from using the internet to gather insight from 9m respondents and has grown from just an idea 20 years ago to over a £1bn market value today: YouGov.

Founded at the peak of the first internet bubble in May 2000 by the joint Chief Executive, Nadhim Zahawi and Stephan Shakespeare (the latter is still in charge). YouGov built its initial panel of online respondents through joint projects with Freeserve (remember them? They were once a FTSE 100 company.) 5 years later YouGov listed on AIM through a placing at 135p (implying a market cap for the company of £18m) in 2005. Like Carphone Warehouse, it is one of those companies that has outgrown its original name. Though the company started off in the business of poling respondents on their voting intentions, the largest source of revenue is market research for brands. Revenue for FY July 2005 was less than £3m versus the just reported £150m FY July 2020. 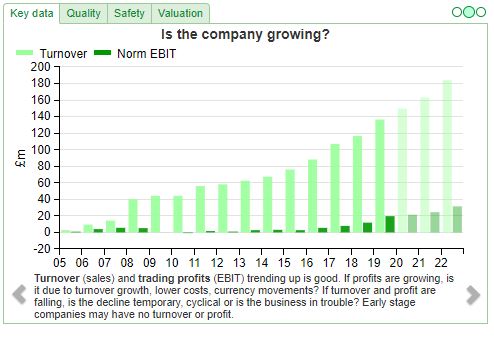 The company uses panels of respondents to research ideas and questions – they pay respondents, but the internet keeps costs lower than telephone or face-to-face interviews without a drop in the quality of insight. They now have panels in 42 markets, and a smart phone app, so that respondents can fill in surveys on the go. In all over 9 million people provides YouGov with thousands of data points on consumer opinions, attitudes and behaviour. Frequently YouGov will post a link to a survey that has been quoted in the media, so respondents feel that their opinion really matters, which is a benefit beyond the simple financial rewards. As a former equity research analyst, I can confirm that while it is good to be paid for having an opinion, it is even better when others take notice, instead of when your opinion is of no consequence at all.

Interestingly YouGov shares took more than 10 years (until March 2016) to regain lost ground and hold their value above the 135p placing price. But since then the share price has gone from strength to strength, peaking at £10 following an encouraging trading statement at the end of July this year. This suggests that there are significant barriers to entry, not so much in the data analytics, but building up the millions of online respondents. As you would expect this is reflected in high RoCE, a CROCI and excellent Free Cash Flow conversion. 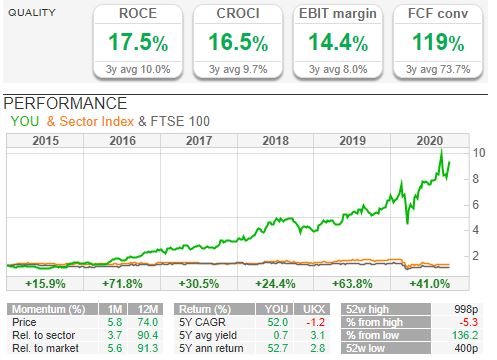 YouGov management have some demanding targets for the period July 2019 to July 2023: to double Group revenue (from the FY 19 base number), double adjusted operating profit margin, and achieve compound EPS growth of more than 30% per annum. These targets are linked to the Long Term Incentive Plan (LTIP). Management have designated the first half of the long-term growth plan as the investment phase, suggesting that profits may be suppressed in the short term as the group invests for the future.

Outlook statement says that YouGov has started the new financial year well and trading is in line with expectations (EPS 18p 2021, suggesting a PE ratio above 50x). The company also says there’s evidence of growing demand, and remains confident of meeting long-term targets. Importantly they are also raising the final dividend 25% to 5p per share (there is no interim dividend).I’m kicking myself for missing this a couple of years ago, if I held I certainly wouldn’t be selling.

@Carcosa61 put up a Sharepad comparison screenshot on Twitter (below). If you have an interesting SharePad chart, do flag it to my attention on Twitter with @BrucePackard. 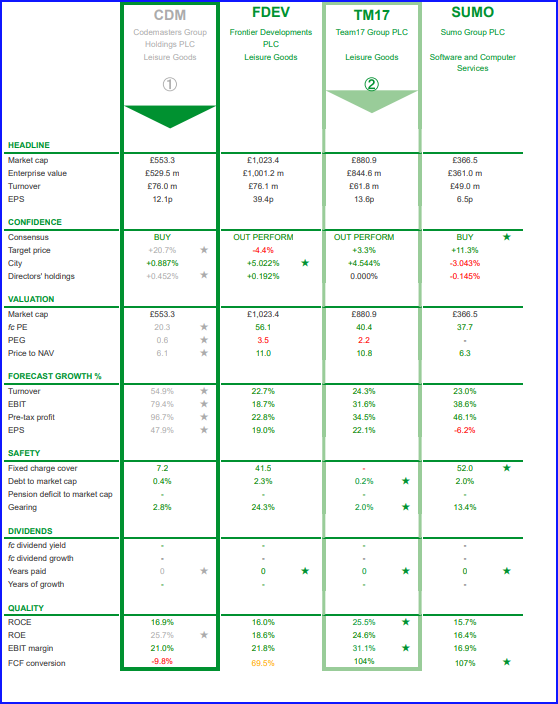 The company specialises in motor racing games, and splits out its existing franchises into 4 areas:

Although they’ve been around for 3 decades, Codemasters only listed on AIM in June 2018 through a placing at 200p a share. This valued the market cap of the company at £280m. Last November the company raised £20m to buy Slightly Mad Studios for £35m (£19m in cash, the rest in shares) plus a contingent earn-out of £16m. This has added £35m of intangible assets and goodwill to the balance sheet, which now stands at £94m, versus shareholders’ equity of £86m. Hence the company actually has negative net assets, if you deduct intangibles. I’m pretty relaxed about this, if a company has high gross margins (Codemasters are 86% FY 2020) and strong cash generation (£33m Cash from Operations FY 2020) negative book value shouldn’t matter.

Codemasters released a trading statement for their H1 2021 trading period (March-September 20). The company should publish H1 results 23rd Nov where it said we should see revenue doubling to approximately £80 million versus £39.8m H1 last year. At 30 September 2020 had net cash of £49.8m in the bank (H1 2020: £24.6 million). The release cycle is very important for gaming companies, producing strong revenue growth when games are released, followed by a tail of revenue from the back catalogue. Trading in H1 2021 benefitted from the launch of F1® 2020, Fast & Furious Crossroads, Project CARS 3 the latter two games being developed by Slightly Mad Studios. 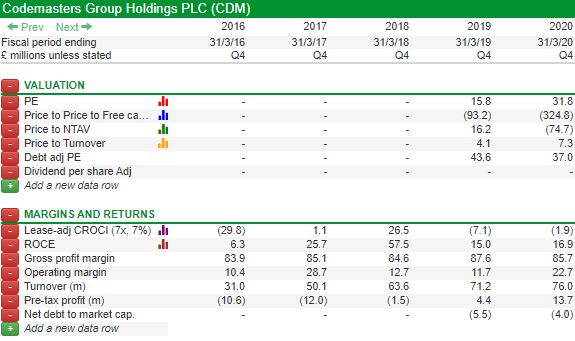 At 385p Codemasters is trading on 5x 2021 sales, and a PER of 32x. SharePad calculates a RoCE of 16.9%, the one metric that I think is worth investigating further is the negative cash metrics (CROCI) has been consistently negative, despite cash from operations being positive on the cashflow statement. I think this is due to acquisitions eg Slightly Mad Studios mentioned above. As I wrote last week, most acquisitions fail, but some successful high performance companies can consistently grow and integrate effectively (Judges Scientific, SDI and Learning Technologies). The computer games industry is clearly consolidating, and with its attractive gross margin, Codemasters looks like it could be a winner.

Sumo Group plc released H1 results to 20th June at the end of September, and did a webinar last week on www.piworld.co.uk which I listened into. NB this is an AIM listed stock, there’s also totally different “cloud” company in the US: Sumo Logic which has just listed on Nasdaq.

Headquartered in Sheffield, Sumo Group was cofounded in 2003 by Carl Cavers (currently Chief Executive) and listed on AIM at the start of January 2018, through a placing at 100p a share. This raised £38m and valued the market cap of the company at £145m. It co-develops games alongside publishers such as Microsoft, Sony, Sega etc. Because they work on a contracting model, management believe they are less exposed to the “blockbuster v flop” power laws distributions of creative industries like computer games, which I discussed in the introduction.

Sumo was originally set up as a “work for hire” games developer, similar to Keywords Studios, providing services to developers and publishers. However they managed to grow their expertise so that they became responsible for start to finish development projects – these projects can last 5 years. Although they don’t own the Intellectual Property for most games that they work on, Sumo say that one of their competitive advantages is “game engines” – they have a library of tools and technology that helps developers to build games.* However this does mean that their gross margin is lower 40% (H1 20) v 86% for Codemasters but above Keywords 36%.

The company’s customers pay according to contractual agreements, eg fees paid upon achieving monthly milestones, rather than based on sales performance of the computer game, which gives much greater revenue visibility. Client concentration risk is a concern, but as the company grows rapidly this should reduce; the company is currently working on 34 projects, at 20 different clients. Sumo tries to include potential royalties alongside standard fees, meaning that Sumo benefits from successful games for several years after a game has been released. But currently royalties (client IP and own IP) are just 6% of revenue.

In 2017 they also released their own game, Snake Pass where they do own the intellectual property title, and which they claim a Return on Investment of 83% since launch in their Admission Document. However, the company has decided not to release a sequel (imaginatively titled Snake Pass II) because they decided it would be “marginal”, and hence wrote off £900K earlier this year.

In July this year the company raised £13m in a placing (5% of the share capital) at 180p. Since the IPO at the start of 2018, the company has made 4 acquisitions. Then on the same day as the H1 results announcement in September they announced a fifth acquisition: Pipeworks, for $99.5m, by far their largest to date, which has a similar “work to hire” model, but is based in Oregon, USA. Given that there’s already £24m of goodwill and intangible assets on the balance sheet (v shareholders equity £60m) it seems likely that once the latest acquisition appears on the balance sheet, Sumo will also have a negative tangible book value.

The company reported revenue growth of 27% to £26m H1 to end of June, and statutory PBT more than doubled to £2.8m. Cash from operations was £4.9m and the company had £15.1m of cash at the end of June. Management came across well on the webinar that I listened into and the shares were up 9% on the day. The shares are trading on 38x historic earnings and 7.3x TTM. The greater earnings visibility that Sumo enjoys may be attractive to some shareholders. For me I’m more interested in the kurtosis that either Codemasters or Frontier Developments adds to my portfolio. 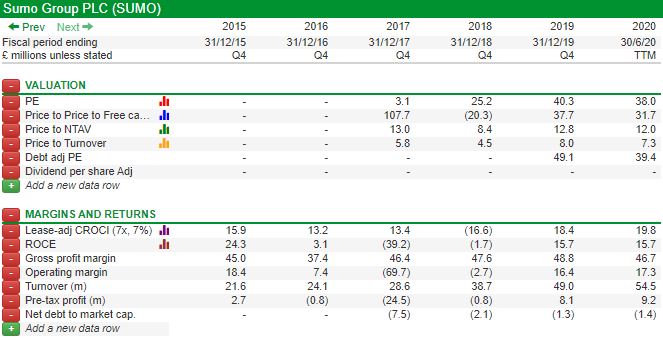 *One general example I learnt about in the pub is the “fast inverse square root heuristic” first used in a 3D game engine 20 years ago. This is truly mind blowing if you can get your head around it: https://en.wikipedia.org/wiki/Fast_inverse_square_root

Media often portrays #democracy as elections and votes. In reality it is institutions, the rule of law, independent media, power held to account, checks and balances. Eye opening article about China undermining all those things in #HongKong