Getting to grips with software companies

First, an admission. The software biz is a bit of a mystery to me. There’s a vast ecosystem of enterprise solutions, software that businesses increasingly need to operate, but how do those of us whose technical skills extend little further than Word and Excel decide whether these solutions and the companies that code them are special? They are described using languages we don’t speak. They are often buried within each other. And they enable activities we cannot experience and can barely imagine.

With companies like D4T4 it’s a big challenge to get to first base: understanding the business. It’s important though. As they say, software is eating the World. So far I have investigated three companies that code or sell software: DotDigital, Computacenter and Softcat. They are all doing very well, they say, because businesses have gone beyond using technology to help them be quicker and more efficient. Now businesses regard their data and the insights they can get from it as a cornerstone of competitive advantage. D4T4 says the same thing.

To answer my earlier question, the only way I know to crack an industry open is to keep hurling myself at companies in it.

Little D4T4 is all about big DATA

In one sense, the companies I have studied before are simpler than D4T4. DotDigital codes marketing software (and sells subscriptions). Computacenter and Softcat are hardware and software resellers, essentially sales operations. D4T4 is a kind of mashup. It started life in 1985 as a hardware reseller called IS Solutions, and like other resellers added on software and service elements. Most notably it began to specialise in analysing data particularly for the financial services industry in 2010. Then, in 2015, it became a software company too when it bought Celebrus, a product it had been selling since the early 2000s.

Celebrus captures information about our behaviour as we click around websites and mobile apps. It was a pioneer in building individual profiles of customers from multiple sources and passing information on us to other software systems in real time. A simple example: If we leave a page before we have signed up for something or bought it, it can tell the company’s marketing system, which can then fire-off an email suitably tailored to get us back. Knowing what we are doing in websites and apps can alert companies to fraud, and allow them to deliver personalised content instantly on our phones and in our browsers.

Celebrus makes a big play of its tagless system. Conventionally software captures behaviour on websites using tags coded into the webpage, but Celebrus doesn’t. Tags take time to set up, and the pages have to be re-coded whenever the requirements of the business change. Celebrus is quicker to put to work, and more flexible. No doubt if this is a big advantage other firms will be emulating it, but Celebrus has refined its system for more than twenty years and the tagless element is patented.

Shortly after IS Solutions acquired Celebrus, it reorganised itself and changed its name to D4T4. Now it is “All about the data”, the logo even looks like the word. The company sells its own products, Celebrus and a cloud hosting platform, builds platforms incorporating other software and hardware, and does data analysis. It’s both a seller to other resellers, and a reseller for other sellers!

Back to the balance sheet

But I get ahead of myself. I’m looking at D4T4 because it was one of the companies dredged up by my Cash Kings filter, albeit with one criteria switched off: the one that excludes companies that have issued substantial amounts of shares in the last five years.

D4T4’s cash reserves should help it see through a recession, but maybe it won’t need to draw on them because software and financial services are among the industries less affected by the pandemic. It’s profitable, cash generative, and not unreasonably priced according to SharePad. Take a look at the quality metrics:

Admittedly the latest figures cast the company in a good light, but the three year averages are good too. We already know pre-tax profit will be 21% lower when the company announces its results for the year to March 2020, because it told us in a trading update in April. But D4T4 offers a plausible explanation for the fall: It is selling more recurring subscriptions. The old way, perpetual licenses, meant the company was paid up front, whereas subscriptions spread the payments out. It has to wait longer for the money, which is depressing profit. Once the company builds up its installed base of subscriptions, profitability should improve and be more dependable. The forecast price earnings ratio, based on lower profits to March 2020, is just under 17, a not unreasonable price if the company checks out.

Plotting D4T4’s last twenty balance sheets shows how they have improved. The acquisition of Celebrus in 2015 coincides with the growth of the cash surplus as a percentage of total assets (the green columns): 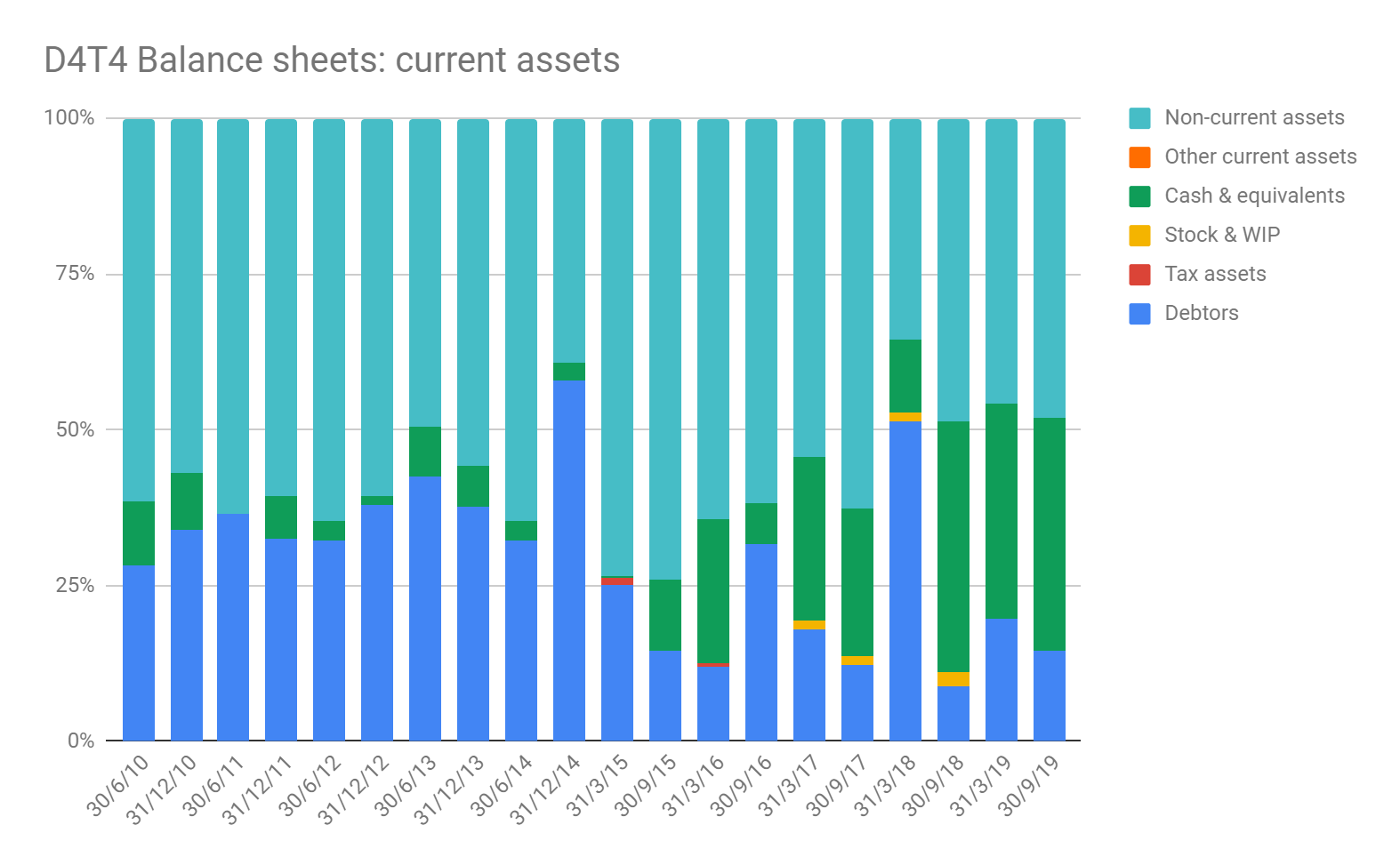 And turning to the other side of the balance sheet, we can see how liabilities have shrunk (the bottom two columns) and retained profit (purple columns) and consequently equity (the top four columns) have grown, also as a percentage of total assets since 2015. 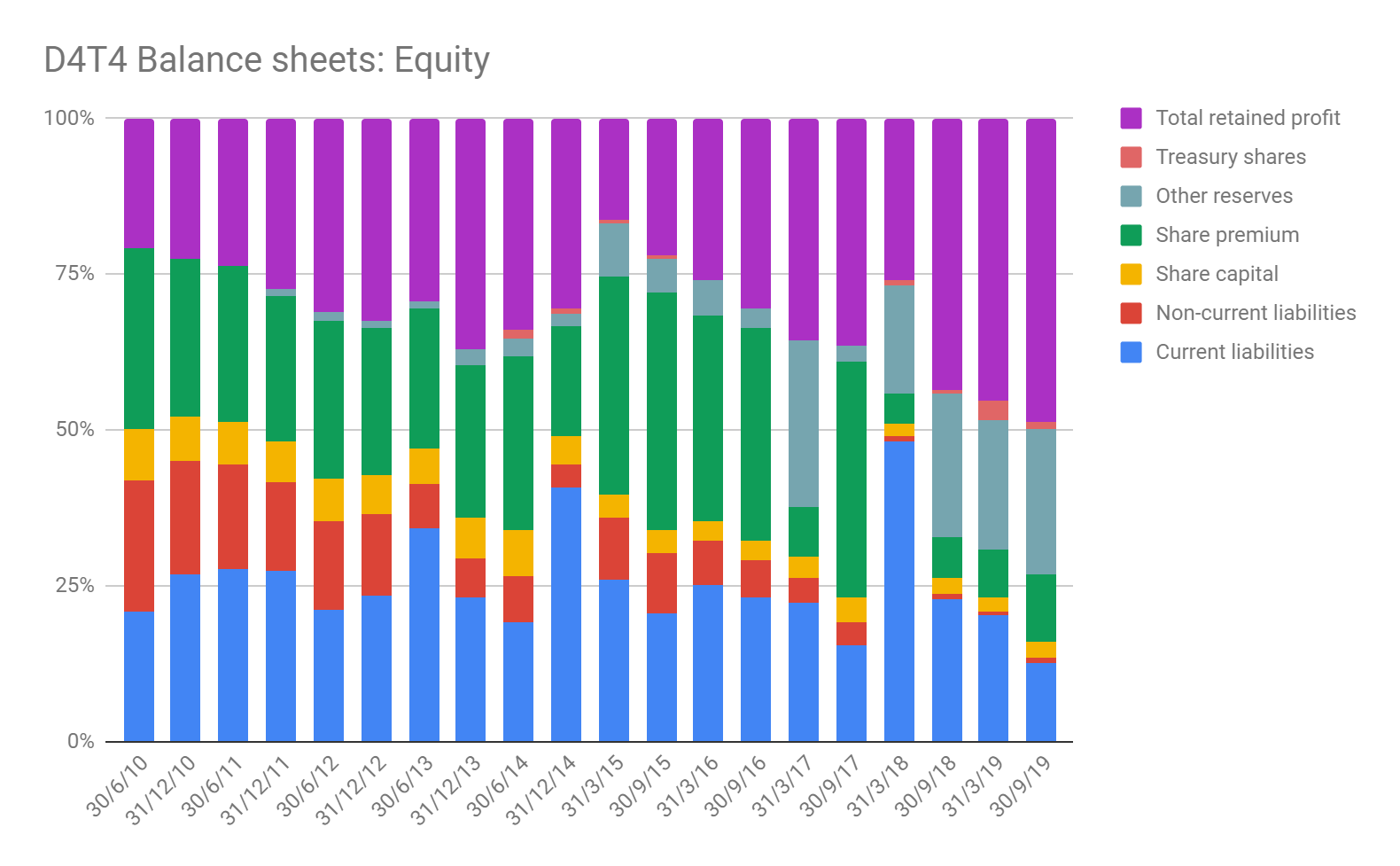 In September 2019, D4T4 was 86% funded by equity. To a large extent therefore, it is in control of its own destiny.

Focusing on the equity (it may help to squint – we’re talking mainly about the purple and light and dark green columns) we can actually see how the acquisition of Celebrus was funded. D4T4 acquired Celebrus in January 2015, and the bar for the balance sheet immediately after (31/3/15) shows that the share premium account was significantly larger as a proportion of total assets than six months earlier. This is where accountants record the value of new shares issued by a company, above their nominal value. D4T4 mostly paid for Celebrus with newly issued shares.

Now I need to explain a quirk in the data. Rather confusingly, in 2018 the company reclassified the premium created by the acquisition of Celebrus, creating a new reserve: the merger reserve. The share premium reserve was reduced accordingly. D4T4 also restated the figures for 2017. SharePad standardises data so we can compare companies. Non-standard reserves like the merger reserve are lumped into other reserves – a catch-all classification. The merger reserve accounts for most of the value of other reserves, so this accounting change explains the big changes in relative size of the two green columns, share premium reserve and other reserves. For our purposes they are largely the same thing, and their combined total has gradually diminished as a proportion of total assets, as retained profit has increased.

By looking at all these balance sheets we can tell, through retained profit – the cumulative total of profit that has not been paid out to shareholders, that the company is not only in a better financial position than it was, but it is also performing better.

Was Celebrus worth it?

It looks as though D4T4 has found the secret to growth, but three things almost made me bail-out of my research before I was ready to write it up:

The first, that its share count rose to pay for Celebrus, I can forgive. It was five years ago anyway, and the shares were issued to buy the product that probably catalysed the development of the business in its current form.

The second, is the company’s dependence on one very large customer/partner. A year ago that customer earned D4T4 nearly £16m of revenue, 62% of the total. A second customer/partner was responsible for 11% of revenue. Investors are generally well advised to steer clear of companies that depend on a few large customers but D4T4’s dependence may not be as alarming as the statistics make it look. Almost certainly these customers are resellers (which is why D4T4 also calls them partners), and D4T4 has many more end users (clients).

Still, I would like to know more about D4T4’s biggest customer. The risk of losing it may be low, but the impact would be high, which is probably one reason why the company is striving to add new partners and work more closely with clients so it can sell them more products and services directly.

The third reason for caution, is the pace at which the software industry is apparently developing. Artificial intelligence, the joke goes, is eating software. Assessing the future of an industry, when I am only just getting to grips with the present, is beyond me. As you should expect, though, Celebrus doesn’t want to get eaten.

Last week D4T4 announced version 9.2, which includes embedded machine learning (an industry first, it says) and natural language processing capabilities. These will better enable enterprises (by which I think it means their software) to understand customers and intervene “in the moment”.

*To download the google sheets into excel, open the google sheets link -> click ‘File’ -> ‘Download’ -> ‘Microsoft excel’. When you open in excel you may find the formatting of the charts mean they do not display correctly. In order to rectify this, right click on the x-axis -> click ‘format axis’ -> change axis type to ‘Text axis’.