Two good companies, but which is better?

Richard takes a first look at Softcat, and he likes what he sees, even in comparison to rival Computacenter, another fine business. Both companies make good money distributing IT, but in Softcat he may have spotted a company with a growth culture.

Actually, I have a third good reason. SharePad’s summary screen indicates it is in very good financial shape: 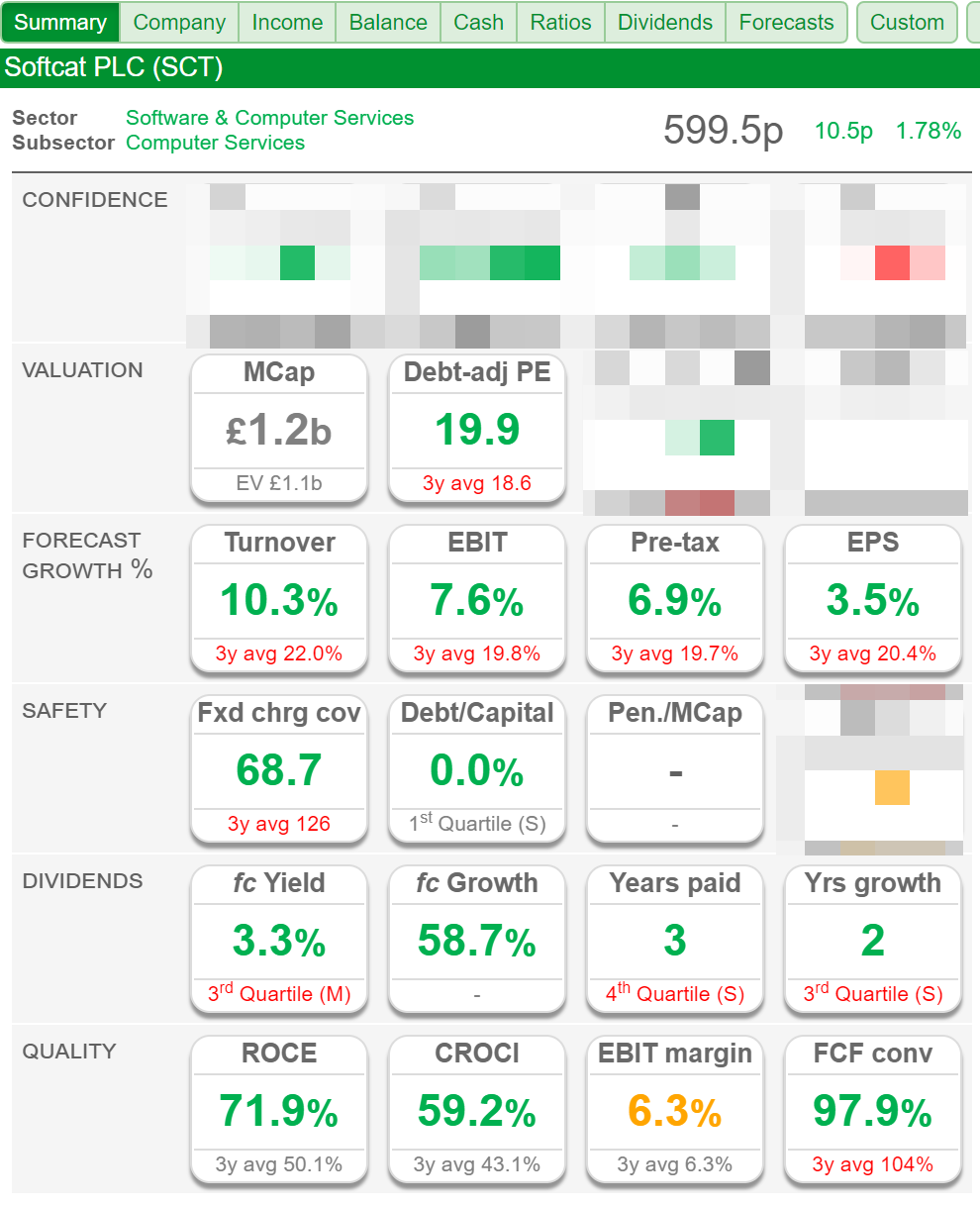 Don’t worry, you don’t need to adjust your screen, I have pixelated out the numbers that do not interest me so we can focus on those that do. From the top right to bottom left:

Already we can form an impression of the business. As well as being financially strong, it appears to be prudently run, but growth has slowed, at least in the current financial year, and the company seems to be putting a greater emphasis on the dividend. We need to dig a bit deeper to find out why, but first…

A digression on executive pay

Other opinions are available, but with rare exceptions I believe executives are paid too much. The convoluted remuneration policies we hear about incorporate bonuses and share options that mask the true cost until the bonuses are paid and the options are exercised. This is not just a matter of fairness. The money might more profitably be spent on employees further down the corporate hierarchy, or in making products or services better, or returned to shareholders and invested elsewhere.

I could write a whole article on the topic, but I would not have any room for Softcat. I digress this far, just to explain an additional bit of screening outside SharePad.

The remuneration report in Softcat’s annual report reveals it has a new chief executive, and that it has given serious consideration to how he will be paid. One of the insidious things about the way executive pay is decided, is benchmarking. Keen to attract and retain the best executives, companies compare the pay of their executives to peers at similar companies. Of course they are all gazumping each other, a process that means pay spirals ever upwards.

Softcat is in the FTSE 250 index, the next biggest 250 companies by market capitalisation (the value of all a company’s shares added together) after the FTSE 100. Although its market capitalisation was pretty average for the FTSE 250 when the annual report was published, the board has chosen to benchmark the chief executive’s pay against the lowest quartile (25%) of companies. Combine his basic salary, £450,000, with the performance related bonus, which could add another £450,000, and performance related share options, which could add another £450,000, and he will earn up to £1,350,000 in 2018. That will probably seem a lot to you. It does to me. But it is £400,000 less than the maximum pay at a typical lower quartile company.

I have never seen a company benchmark itself against smaller companies before, and the reasons Softcat gives for it are very interesting. It thinks it is, comparatively, a more straightforward business than many in the FTSE 250. That is a good sign. A straightforward business should be easy to understand. It may also mean there is less to go wrong.

The company’s decision to put more emphasis on the chief executive’s salary and reduce bonus opportunities also reveals a little about its ambitions. Softcat is trying: “… to encourage Executives to take less risk… to reflect the maturing nature of the Company”.

This may go some way to explaining analysts’ more modest expectations for future growth, and the company’s willingness to return more cash to shareholders in dividends. It doesn’t mean the company will necessarily stop growing though.

Softcat justifies the bonuses it paid in 2018 using the following statistics:

Companies almost always use revenue and profit growth as Key Performance Indicators and even though Softcat’s figures are impressive, it is the inclusion of employee engagement and customer satisfaction that catches my eye. Profit growth is measured over a year, but engaged employees and satisfied customers could be an engine for long-term growth.

We shouldn’t get carried away, as far as I can see these non-financial KPI’s are not audited and companies concoct statistics like them all the time to make themselves look good. But two things incline me to give Softcat the benefit of the doubt. The emphasis the company puts on these statistics is evident throughout the annual report, and employees seem to agree.

It is easy to check recruitment sites to see whether the views of staff match up to the image a company projects. There are 147 reviews on Glassdoor, and generally they are good. This one from Indeed is really succinct:

Others are more expansive, saying there is a lot of training and support from colleagues. Softcat provides consultancy and services as well, so other roles are available, but principally it is a sales organisation.

Online reviews can be unreliable, people with axes to grind or time to waste see to that and reviews can be orchestrated by HR departments, but they also provide a counterpoint to the jargon ridden public relations inflected words of companies themselves.

Firms that pay executives huge bonuses, rip off customers, stitch up suppliers, and bully staff can make a lot of money in the short-term but I do not think that is a sustainable way to build a business (and even if it were, I would not want to invest). My first impressions of Softcat suggests it might be the opposite.

We can get an inkling of how good Softcat is by comparing it to Computacenter, which I have already decided is a good business. If I were to choose one chart in the panoply of charts in SharePad’s carousel on the summary screen to judge the quality of a company it would be the DuPont analysis (which I described in more detail when I wrote about Computacenter). It is limited to the last six years because Softcat only floated in 2015: 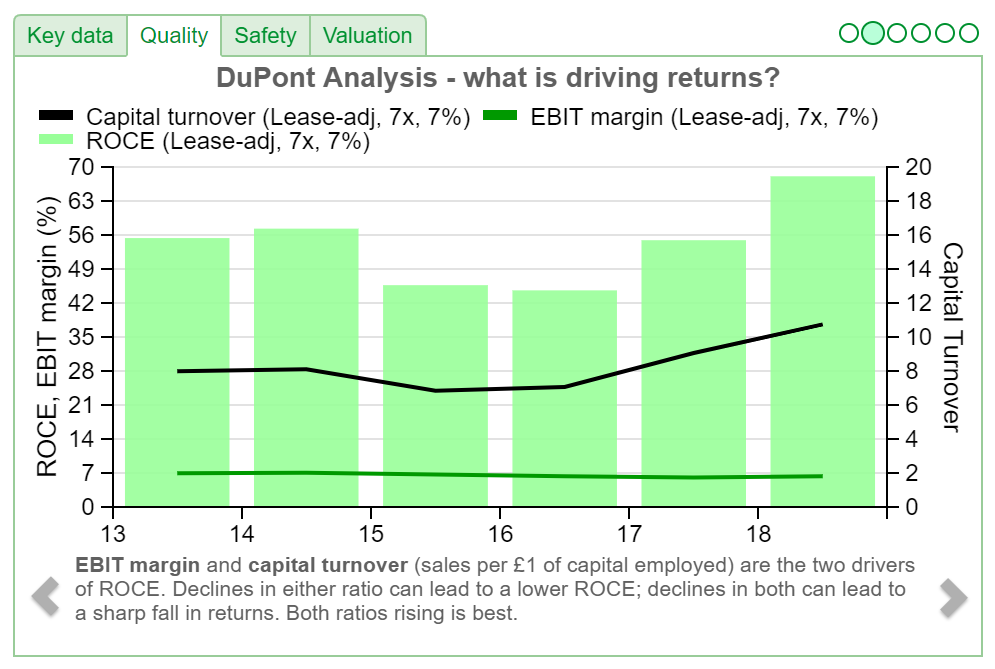 The Computacenter chart goes back much further, but we can see Softcat is more profitable (it earns a higher return on capital) because it has bigger profit margins and turns capital over more quickly. 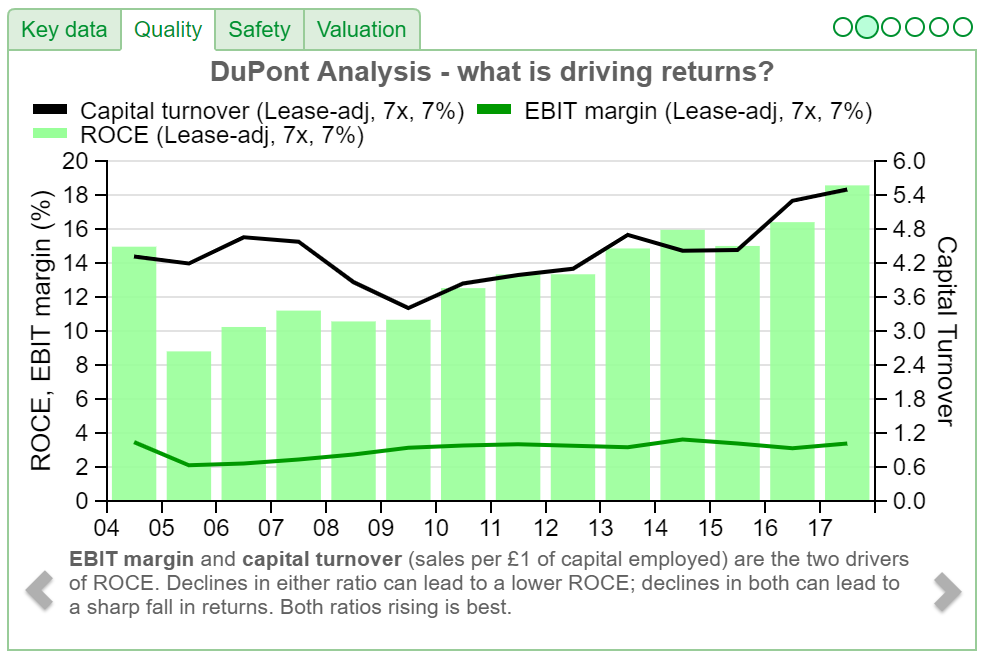 Softcat’s apparent superiority leads to some obvious questions, chief among them: Why is it the better of two good businesses? And will Softcat grow enough over the long-term to justify its relatively high share price?

I must convince myself two theories explaining what makes Softcat special are most probably right. The first we have already touched on, it might have a superior culture. The second relates to the customers the two company’s serve. Computacenter’s customers are large corporates and government departments. Softcat’s heartland is small and medium sized businesses. In the increasingly baffling world of IT, smaller businesses will be even more dependent on outside expertise than large businesses. They are also in a less of a position to squeeze the margins of their suppliers.

On growth, both companies grew substantially in 2018, so reduced expectations in 2019 partly reflect the fact that they have to do very well in 2020 to grow at all. Investors are also gloomy about the prospects of the economy, and that includes analysts making forecasts. Softcat’s small business customer base may be at more risk if the economic doo-dah really does hit the fan, especially as, unlike Computacenter’s customers, they are situated entirely in the UK and Ireland and I am also pondering whether the rapid adoption of cloud computing, the provision of computing services over the Internet, is more of a threat than an opportunity for resellers.

If I am right about Softcat’s culture though, it may surprise us over the long term even as the business matures.