Stroll into a WH Smith and you might wonder why a shop that sells Sellotape, colouring books and slime (really!) exists today, but the company thrives. Smith’s creeping reinvention is an example to investors seeking to profit from businesses people casually write off because they see no future in them. Perhaps Computacenter is another.

The past does not always resemble the future

Decades ago WH Smith incubated a second stream of business, the travel stores now ubiquitous in airports and railway stations. As high street stores have declined, it has ruthlessly adopted tactics and technology to keep them profitable, piling shelves high to maximise the revenue it earns per square foot and reducing staff using self-checkouts. Cash flows from these stores financed the expansion of WH Smith’s travel empire, and so it has become a leading global travel retailer, with a UK stationer attached.

Perhaps we are hard-wired to assume the past will resemble the future. Investors can be very slow to work out that a dull business is improving, I know, because I am one of those investors. I sold my WH Smith shares well over a decade ago, and I took a look at Computacenter, the subject of today’s article, in 2015 but I did not buy the shares.

Yet in Computacenter’s most recent financial year ending in December 2017, revenue and profit leaped. Perhaps I should have scrutinised SharePad’s Summary page for the company more carefully because in 2015 it was already showing many years of improved profitability.

Checking out Computacenter in SharePad 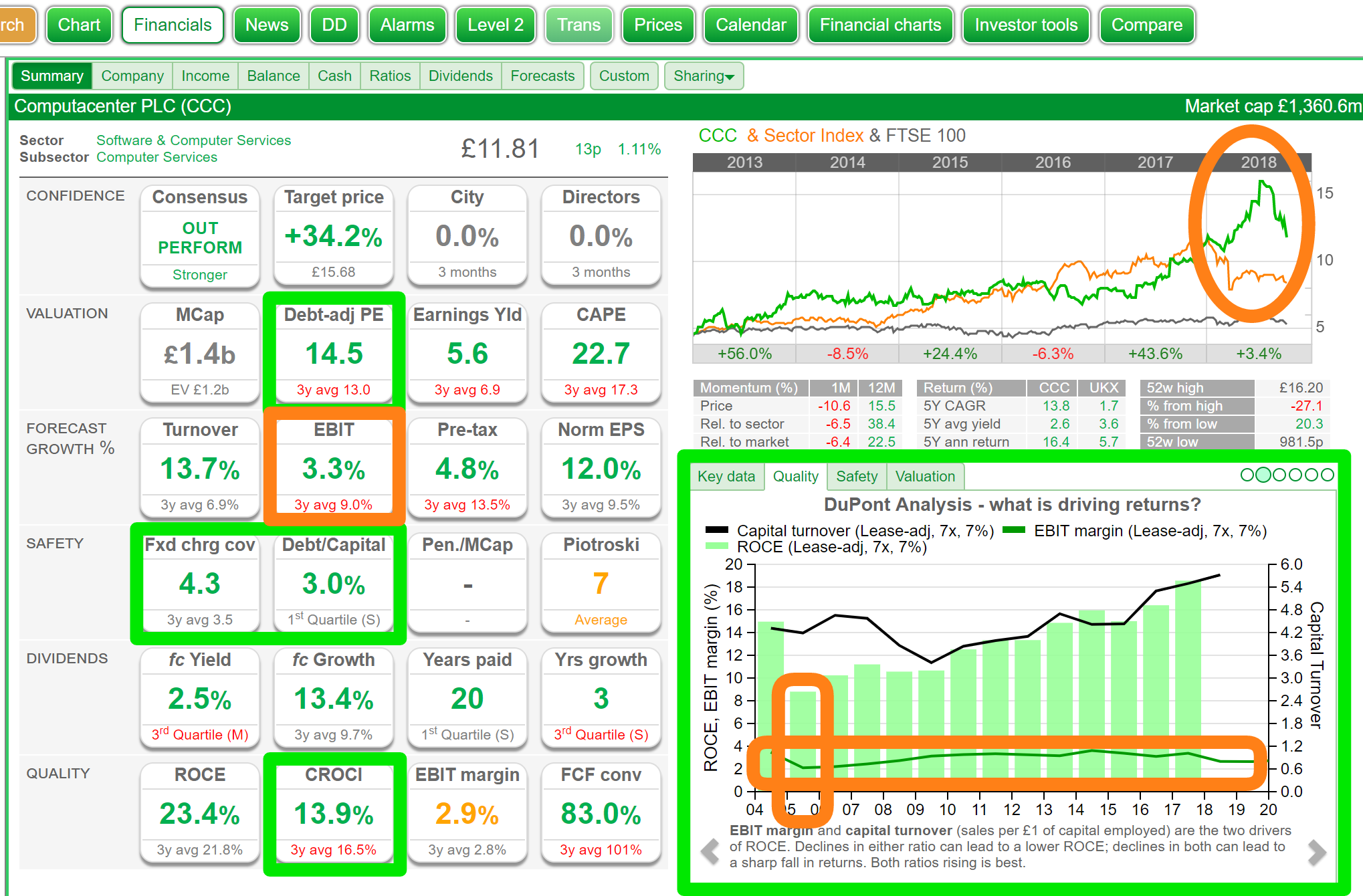 I have marked up this screenshot so you can see what I am thinking about, when I am looking at this page. The elements outlined in green give me confidence Computacenter might make a good investment. I need to investigate the items outlined in orange. Reassuringly, I have not outlined anything in red.

The green bar chart shows rising return on capital employed (ROCE) since 2005, the only year since 2004 Computacenter’s ROCE fell below 10%. Companies exist to earn a return on the money they invest, so profitability, as measured by statistics like ROCE, is the ultimate test of whether Computacenter should have been in business.

Arguments abound about how high returns should be to justify the risk of being in business but if a company regularly earns more than 10% ROCE that’s good enough for me. Years in which businesses fail to meet this benchmark are worth studying to learn about their vulnerabilities.

Even though Computacenter is highly profitable in terms of ROCE, its profit margin, the return it makes on every sale (shown by the dark green line on the same bar chart) has never even reached 4%. Computacenter is mainly a box shifter. It buys IT from manufacturers, distributors and software houses and sells it to big companies. It adds little value to the products, and relies on making a small amount of profit on a large volume of sales. The more sales (turnover) the company makes in a year compared to the money invested (capital turnover, the black line on the bar chart), the more profitable it will be in terms of ROCE.

The relationship between profit margin, capital turnover, and return on capital employed is known as the DuPont identity (as explained in much more detail here):

Computacenter is more profitable in 2017 than it was in 2005 because it is earning higher profit margins and turning capital over faster than it was:

To get at the lease-adjusted figures in the chart so I could show you the math, I created a custom table in SharePad, but for investing purposes the chart is good enough to get a sense of what is going on.

One of the reasons Computacenter may be more profitable than it was is that it is a better box shifter. In 2005 it failed to hit sales targets agreed with suppliers and consequently did not receive vendor rebates, effectively retrospective discounts on the products it sold. Sales were lower, the company, said because of intense price competition from manufacturers selling direct. The combination of lower revenue and higher costs hit profit margins.

Frankly I don’t know what’s changed, but scrabbling around for clues in the annual report I note that in recent years the company has not mentioned vendor rebates. Perhaps it is less dependent on them. Note 27 says Computacenter increasingly sources IT from distributors, so its agreements with suppliers may have changed.

Another reason Computacenter may be more profitable is it is doing proportionately less box shifting. For decades the company has offered clients consulting, project management, and outsourced solutions, services that probably allow it to earn higher profit margins.

Hearteningly this seems to be a slow process. Computacenter’s box shifting business, described in the table below as Product in 2005 and Supply Chain in 2017, is not contracting like WH Smith on the high street, but its service businesses have grown faster. They now account for just over 30% of profit, compared to 23% in 2005.

The shift towards services may be greater because I am comparing a bad year for Product/Supply Chain (2005) with a good one (2017). The comparison is imperfect because Computacenter has changed the names of these capabilities and in the process may have shuffled them somewhat, but I think they are broadly comparable.

I think Computacenter may be a good business that is getting better, and if that is true the finances should be in good nick. The other figures I have highlighted in the SharePad Summary page suggest it is. The company has very little debt (only 3% of the capital required to operate the business is financed by debt), it can easily afford to pay the rent (profit in 2014 was more than four times the cost of rent and interest combined), and it earns a decent return in terms of cash (CROCI), which gives me confidence the profit figures reported are not grossly exaggerated.

Growth is a potential fly in the ointment. The company has grown well in the recent past, but the forecast for this year is anaemic. Perhaps that explains why traders have gone cold on Computacenter, and the share price has fallen. I think the company is probably doing the right thing to grow profits over the long-term, so I am not inclined to worry about short-term forecasts.

After a strong sell-off, the shares are valued at about 14.5 times earnings on a debt-adjusted basis. Flip that ratio to express earnings as a percentage of the share price and you get 7% – not a bad return to shareholders even if the company doesn’t grow.

Investing in companies that adapt

There’s lots I haven’t said about Computacenter, and lots more I don’t know. All my analyses are works in progress. But I think perhaps the slower the pace of change, and the longer a company has been thinking about it, the greater the chance it will adapt and grow stronger.

The demise of high street retailers has been predicted almost since Amazon floated on the stock exchange in 1997, which was also the year WH Smith created the UK Travel Retail businesses and made international travel retail part of its strategic plan. As the impact of the Internet on bricks and mortar retailers became apparent, WH Smith’s strategy allowed it to thrive.

Currently Computacenter’s Supply Chain business is doing very well, due to customers’ thirst for technology to improve security and efficiency. But the company recognises they can substitute in-house IT for services delivered over the Internet.

In a brave new world where so-called cloud computing is ubiquitous Computacenter could still profit by helping customers to migrate their systems online and selling cloud-based services, but maybe it will be the service businesses that allow it to thrive.