Assessing whether profit is real

On the face of it Ricardo is a great company, but in recent years its earnings have deviated a long way from the cold hard cash that has flowed into the company. That may be changing.

Regardless of the share price, I am attracted to Ricardo because it does something worthwhile. In the company’s own words:

“…across everything we do, in every assignment we undertake, we remain committed to the ethos of our founder, Sir Harry Ricardo, one of the most innovative engineers of his time, who in 1915 set out on a mission to ‘maximise efficiency and eliminate waste’.”

Harry Ricardo invented the Mark V tank engine in 1915. It was a low-emission engine and something of a breakthrough on the battlefield because cloudy exhausts from less well equipped tanks gave away their position.

Today Ricardo is still designing and manufacturing efficient and high performance engines and transmissions mostly for car manufacturers, but over many decades it has diversified into hybrid and electric technologies and consultancy, deploying its engineering and environmental know-how across the transport and energy sectors, and government as well as industry.

In addition to valuation, the lines of SharePad’s summary dashboard that matter most to me are quality and safety. If a company is highly profitable (high quality), and does not have overbearing financial obligations (safe), it should be able to find opportunities to invest and grow or, failing that, return fat profits to shareholders in dividends.

The summary dashboard is configurable, and this is what my setup tells us about Ricardo’s safety:

The two green numbers show Ricardo is not carrying too much debt. The third box, tells us that its pension fund is underfunded, but the deficit, at 1.4% of market capitalisation, is small and probably nothing to worry about.

The figure in grey below the free cash conversion figure bothers me, though. The three year average is only just over 30%. If that is typical of Ricardo, it may cast doubt on the quality of the company’s earnings.

There was a lot of jargon in that last paragraph so let’s take a step back and consider earnings, free cash flow, and the relationship between them.

Earnings, and free cash flow are two measures of the same thing, how much money the company made from operating activities after deducting the cost of running the business, profit in other words.

The earnings figure, which also measures the amount of money left after costs, is calculated using accounting rules that recognise revenue and costs in the same time period to produce a more accurate statement of a company’s financial performance.

You may well wonder how any calculation can be more accurate than cold hard cash. The matching rules mean accountants use their judgment, for example, to spread the cost, or depreciate, an investment in equipment over the many years they expect the equipment to be used. They also allow companies to book revenue, when a company issues an invoice (sometimes even before), even though the customer has yet to pay it and the company has not received the cash. The size of these adjustments depend on judgements made by a company’s finance department, how long a piece of equipment will last, for example, or when to book revenue. Judgement introduces ambiguity, and since companies are usually keen to present themselves in a good light, it is reasonable to assume some will make judgements that flatter profit. Without these judgements though, revenue and profit, would come in great chunks. Some years a company might look extraordinarily profitable, years in which it did not invest for example, and other years it might look like a basket case.

Sometimes I think of earnings per share as a best case measure of profit, and free cash flow per share as a worst case measure. Often, the truth is somewhere in between. The difference between the two, the quality of earnings, is important because the measures of profitability and value we use depend on the profit calculation (return on capital and price earnings ratios to name but two). 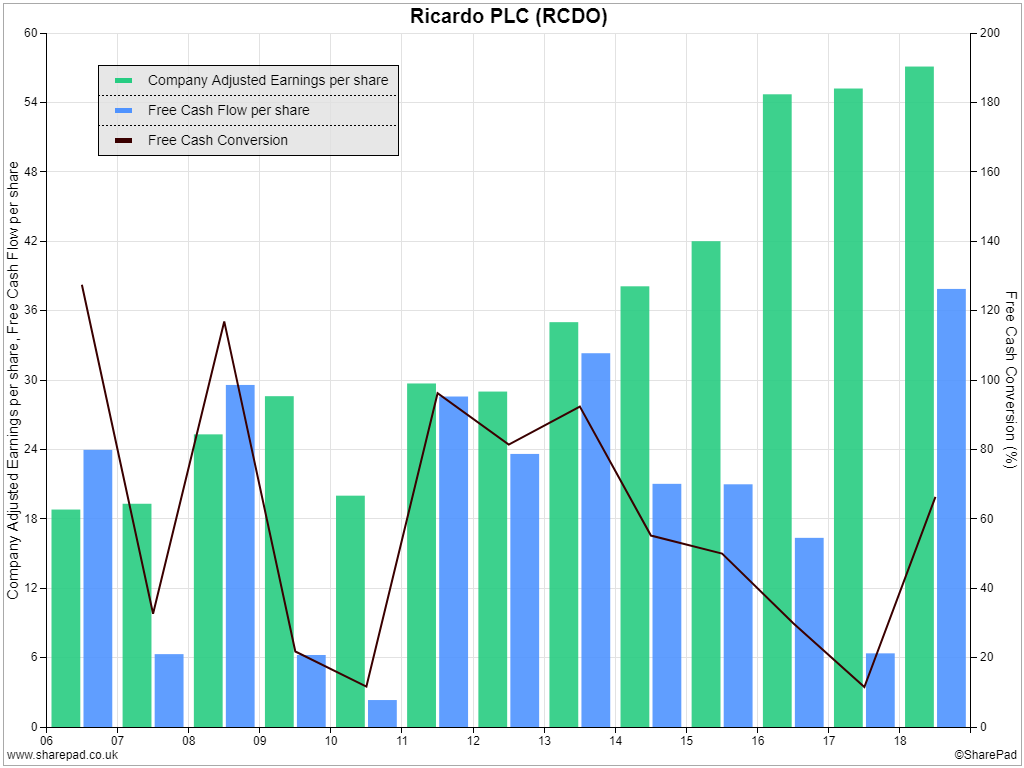 It looks like the years from 2014-2017 were unusually poor in cash conversion terms, so we should probably take a closer look at what happened.

Before we compare cash flows to profit, we can check whether the company is inflating the reported profit figure by ignoring exceptional items, also known as one-off or non-recurring costs. By default, SharePad uses this company adjusted profit figure because, if the exceptional event will not recur it is a sunk cost we probably don’t need to worry about. If a large proportion of the adjusted profit is the result of adjustments or the company routinely makes adjustments, it is sensible to question whether the costs are truly exceptional. 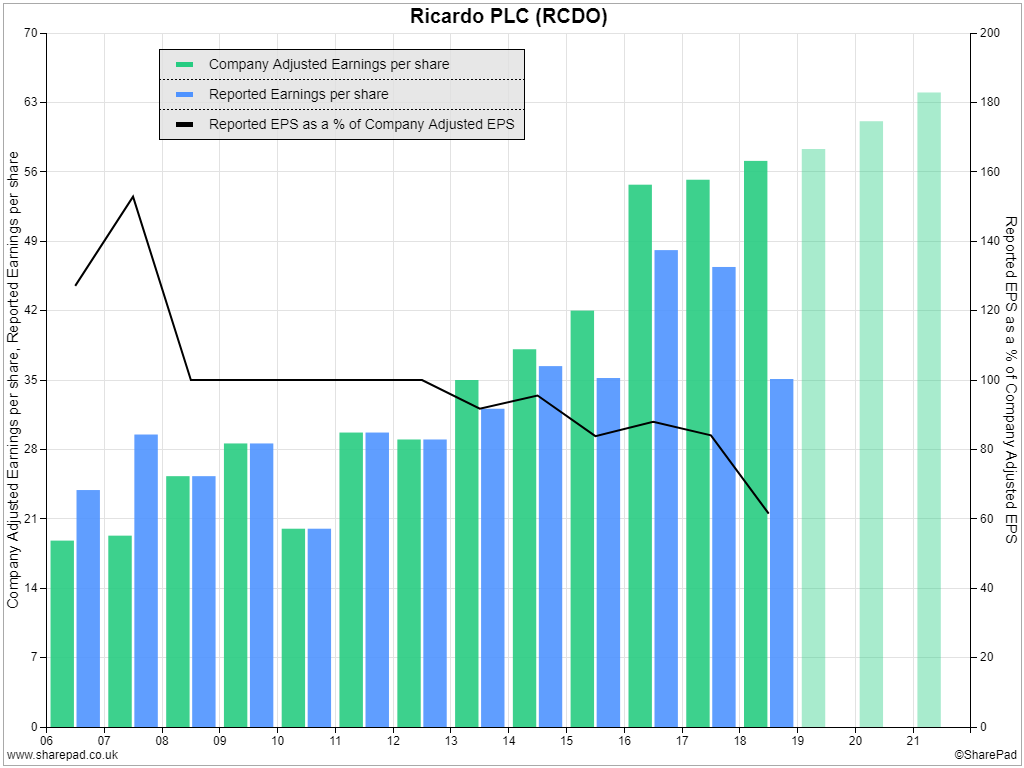 In 2018, the most recent year, almost 40% of the company adjusted figure was the result of adjustments.

Exceptional items are documented in the notes to Ricardo’s accounts. I will not go into the detail here, but in recent years most of the exceptional costs ignored in the adjusted figure have been acquisition costs. In 2018 Ricardo also ignored restructuring costs (for example redundancies). Acquisitions are one-off events and generally speaking it is reasonable to ignore the associated costs, but some companies are forever restructuring so we need to keep on eye on whether Ricardo is becoming one of those.

Taking a tip from Maynard’s playbook (he used this technique to evaluate Somero Enterprises last week) we can download SharePad’s cash flow statement and find out where the cash has gone by summing up the cash flows over the recent period of mostly weak cash flow (2014-2018): 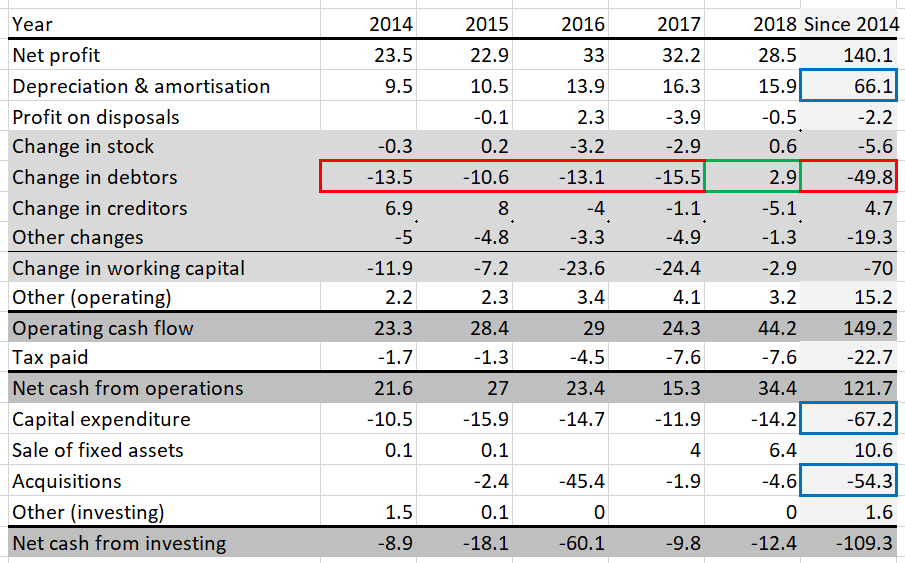 The cash flow statement starts with reported profit, adds back non-cash charges and gains created by accounting judgements to arrive at operating cash flow. Then it deducts the cash cost of tax, investment and financing (borrowing money or repaying debt).

For the purposes of this analysis we can forget about financing (I have left it off the spreadsheet) and the £54.3m spent on acquisitions because these are not part of the free cash flow calculation, which determines how much of the cash generated by operations is available to shareholders.

The £67.2m cash spent on capital expenditure is unlikely to explain the discrepancy between reported profit and free cash flow either because it is very similar to the depreciation charge (£66.1m) in the profit calculation.

The £49.8m cash cost of the Change in debtors, though, is significant. Debtors is, in the main, money owed to Ricardo by customers. Scientists, technicians, and project managers at Ricardo work on large projects for a wide range of customers. The customers pay in instalments, but Ricardo books the revenue on a different schedule as it does the work. In 2017, Ricardo had yet to receive 36% of the revenue it had booked, which, once costs are deducted increased accounting profit but not cash flow.

It is normal for debtors to increase in-line with revenue, but at Ricardo it had risen much faster, partly because customers had delayed orders in 2017 while the auto industry worked out what to do about new government plans to phase out diesel and petrol cars. New orders came through, but the timing meant Ricardo booked the profit in 2017 but would not collect the cash until the 2018 financial year.

The good news is Ricardo seems to have collected the cash as debtors actually decreased in 2018, which is why I have outlined it in green in my spreadsheet above.

Not so reassuringly, Ricardo says little in its annual report about the other reason debtors have been on the rise. It’s doing more business in Asia, and the customers there are slow payers. If it continues to grow in China particularly, perhaps we can expect cash flow to deteriorate again.

I have not mentioned another sufficient drain on cash flow, annual payments of £4.3m to plug the company’s pension deficit (it is included in “Other changes” in SharePad’s version of the cash flow statement). The company is committed to increase the deficit reduction payments to £4.6m at least until September 2021.

Pension accounting is very complex, and deficits shrink and balloon from year to year depending on the judgements made by accountants. But with the deficit currently £5m, it is little more than one year’s deficit payment. Perhaps we can envisage a time when the pension fund is no longer draining cash from the company.

We can also value a company with low quality earnings using free cash flow per share instead of earnings per share. SharePad includes the ratio, but due to the volatility of cash flow it is better to normalise cash flow by taking the company adjusted profit and multiplying it by average free cash conversion.

At a share price of 638p the shares cost 638/25=25 times normalised free cash flow per share, a free cash flow yield of 4%. Not greatly attractive, but it is after all a worst-case valuation.