The Trader: Macroeconomic factors on stocks

Trader Michael Taylor looks at indices and the macroeconomic impacts on the market.

It’s been another volatile few weeks in the market. The game has now changed, and players must adapt or see their money taken from them.

Over the last ten years, private investors could get away without bothering themselves too much about macroeconomics.

Everything was it should’ve been. Rates were low, borrowing was cheap, projects were invested in and QE fluffed up all asset prices.

The trade was being long because there were no external shocks to the market and private investors could focus on stocks. This is because little of what was occurring in the macroeconomic environment was relevant to most stocks in question.

But that is now no longer the case.

When private investors look at stocks now, they need to factor in a macro view before deciding.

For example, you might find a semi-conductor company that has all the right attributes – but that’s no good if the price of raw materials has tripled or it can’t get the parts.

The price of everything has now surged, from metals, cotton, fertiliser, and wheat. The only person I knew who had traded cotton and wheat was Jesse Livermore (you can read my thread here); now even Uber drivers are talking about the price of wheat.

You can’t just look at a company and ignore the macro.

To see what the market has been doing, let’s look at the charts of some of the popular indices. 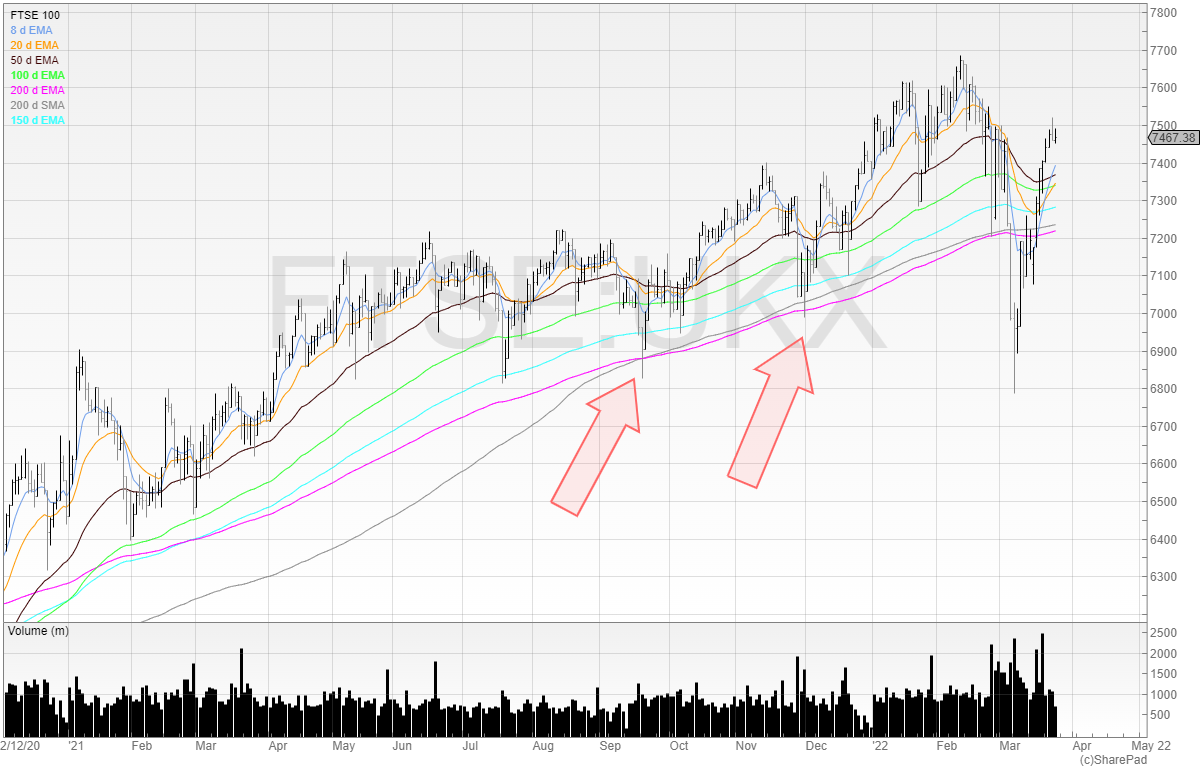 I’ve marked two arrows on the chart where the stock tagged the 200 moving averages and bounced off. We saw in March a fall through this support although the stock has now rallied heavily to recoup much of its losses.

There will be people who opened up shorts at the bottom and are now heavily offside. This is why it’s best to trade from the point of least resistance (the breakdown of support) and have risk management strategies in place to ensure a trade doesn’t go heavily against you.

I don’t have a view to trade this. If I had to, I’d want to short the breakdown of the former support again with a tight stop.

We can see that the break of the 200 moving averages was also the key here: 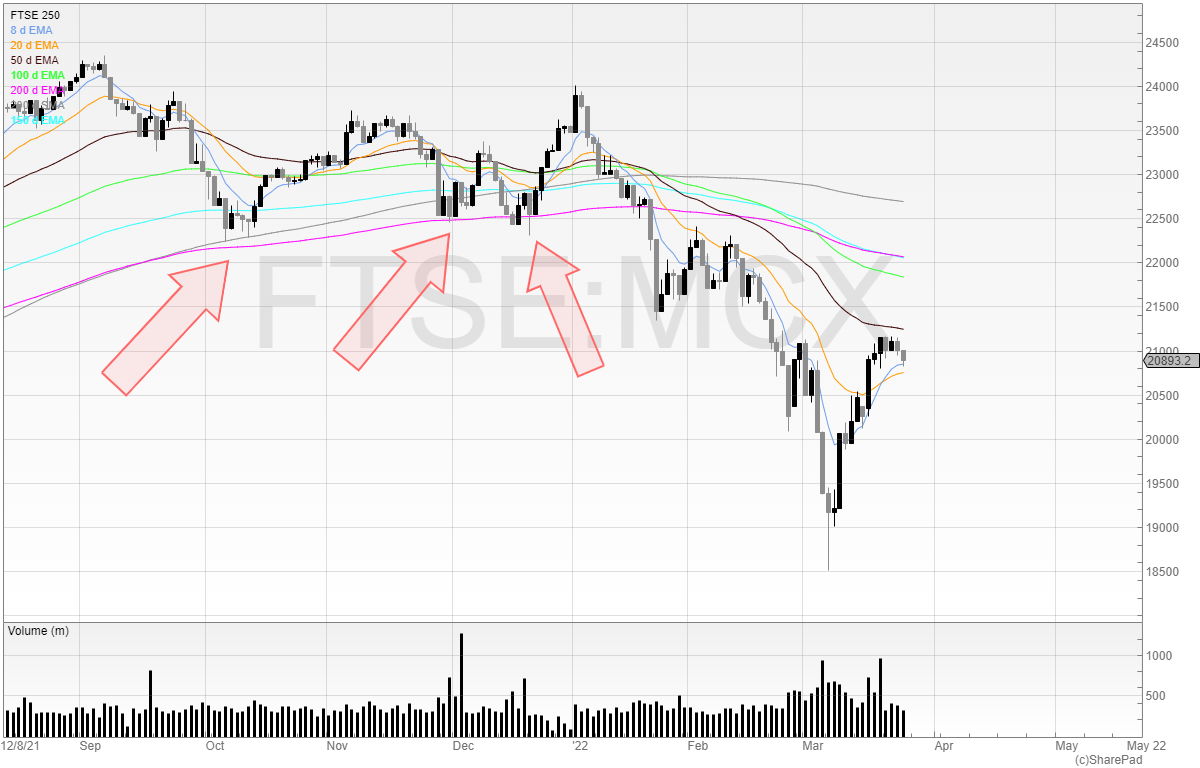 Since the breakdown in early January, the index has continuously plumbed fresh lows.

We’ve seen a rally in the last two weeks and many small caps have bounced.

However, we’ve still very much below both 200 moving averages which suggests that the trend overall for the FTSE 250 is down.

This isn’t a market to be owning lazy longs. Lazy longs don’t stay lazy for long.

The DJIA has shown resilience. It too fell through all moving averages but has now bounced back and managed to reclaim a spot above the 200 moving averages. 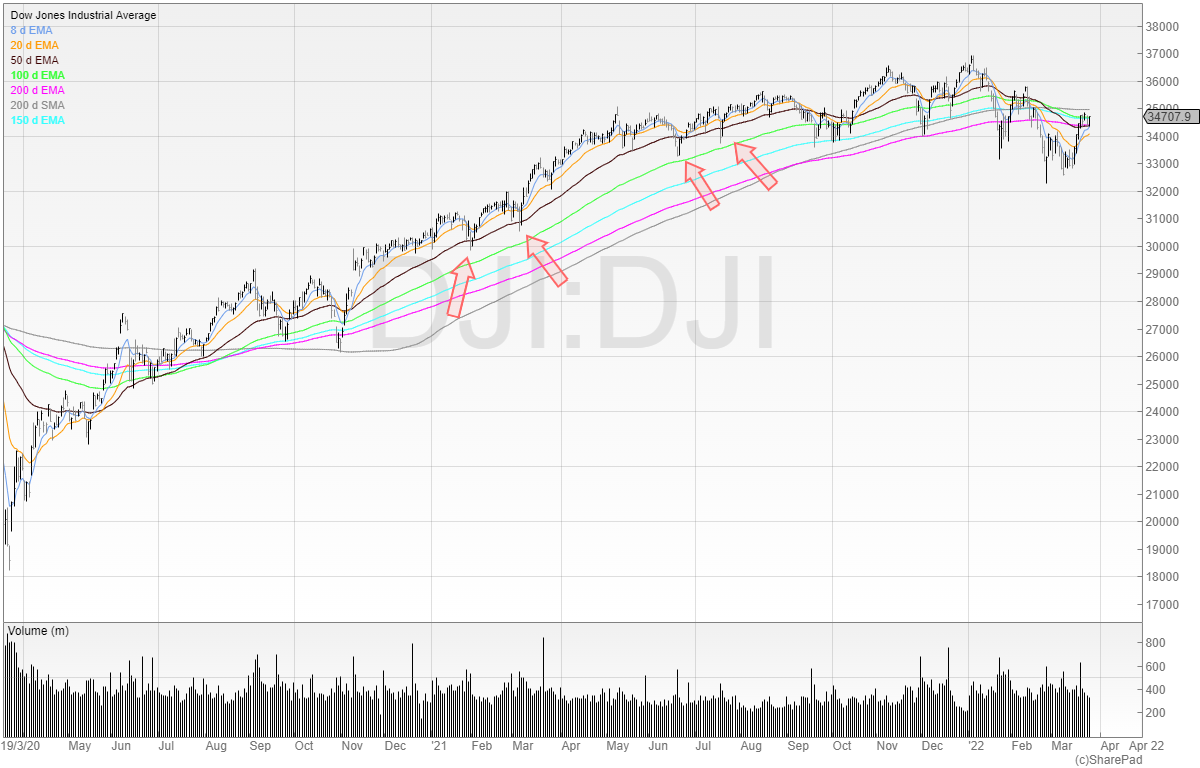 I don’t trade US stocks but the US indices act as a bellwether for the rest of the equity markets.

However, being long just because the US is now technically back in an uptrend is too reductive. I keep an eye on it as a marker of sentiment but don’t factor this into my decisions. It’s far better to look at the overall market you trade in, which in my case is the UK indices. 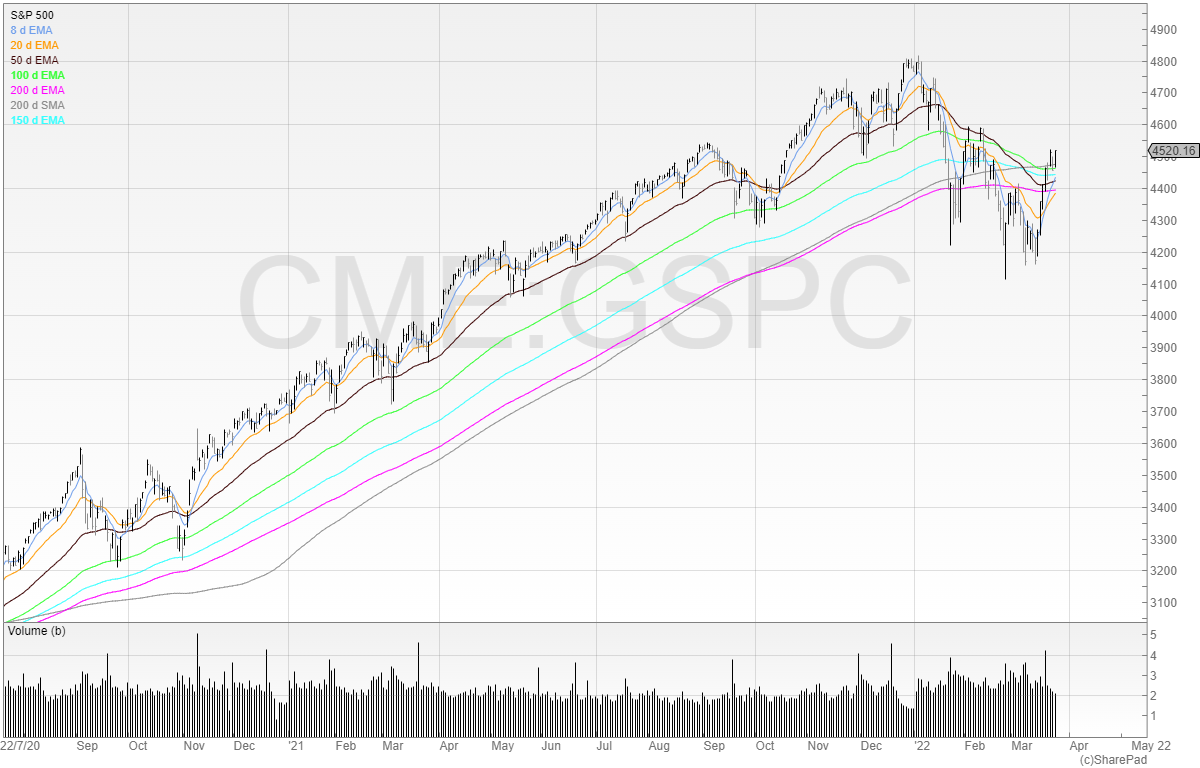 However, a look at the AIM All-Share is a different story! 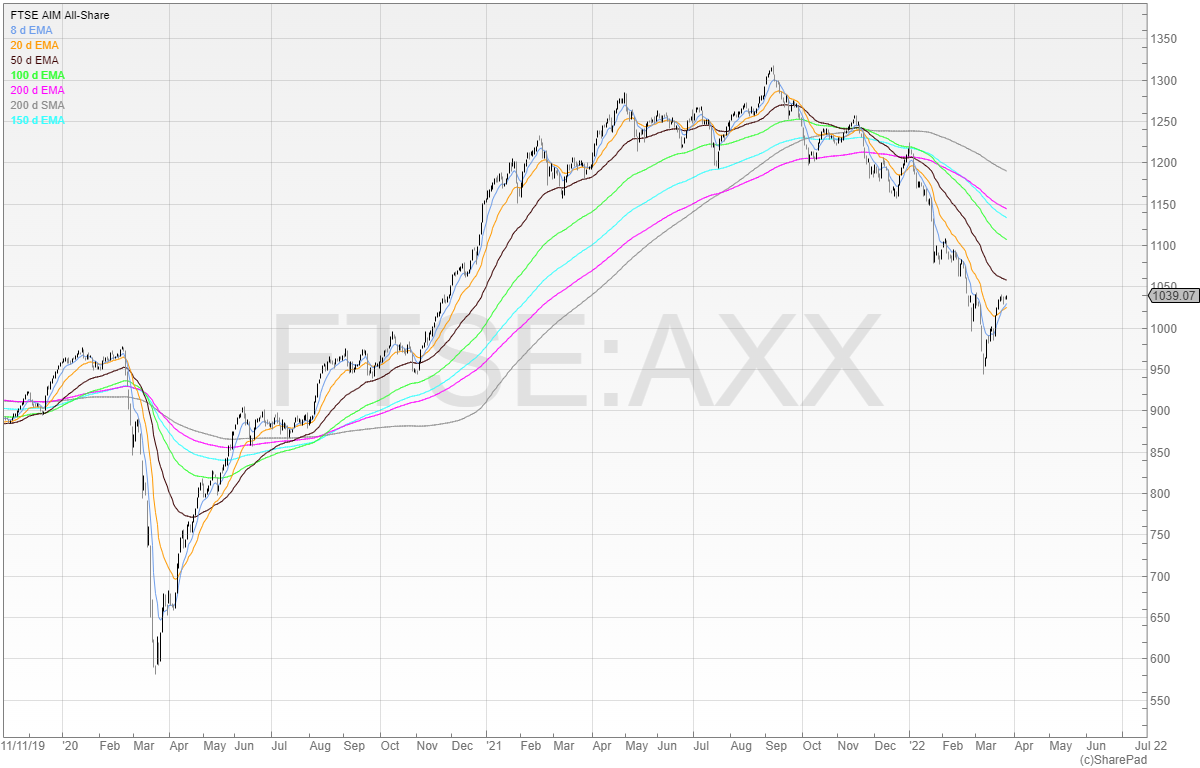 The AIM index is still in a downtrend and by some margin. This could continue as many small cap constituents are unprofitable and non-cash generative.

That means that at some point lots of these companies will need to raise.

The word from several brokers is that placings are now a lot harder to sell. This is inevitable due to the cyclical nature of the market.

Everyone’s happy when they’re making money, and when prices are rising people are willing to pay up and chase. In fact, the stock market may be the only market where people aren’t so keen for a bargain.

If placings are harder to sell because appetite is down then that means many of these placings will be discounted. In my view, private investors should be checking the balance sheet and cash flow statements of their holdings and assessing the placing risk.

Traders should be looking for these companies as potential short targets.

It’s often been said that the stock market is not the economy. That’s definitely the case here.

Despite the Ukraine war pouring fuel on the fire of the already existing issues from Covid – the market is still near the levels pre-war.

That means that the market has discounted almost entirely the effects of the already existing issues from Covid. Supply chains, logistics, and Covid in other countries.

Somehow, despite the fact that in a few weeks heating bills are going to rise by ca. 50%, and then another ca. 25% on top of that in October, and not forgetting that the prices of everything is exploding, the market has shrugged this off.

As a trader who mainly focuses on technical analysis, I’ll keep trading the setups. But it’s hard to ignore the severe headwinds we’re currently facing.

Consumer discretionary spending will likely fall, and that means pressure on retailers, leisure and hospitality, airlines (who are already troubled by the oil price).

There are plenty of moving parts in an economy, and I am certainly no expert economist. But I prefer to have capital where stocks have tailwinds rather than headwinds.

If you’re employed you can still:

The internet has removed the barriers.

Growing your earnings has never been easier.