The Trader: A look at the commodities sector

The commodities sector is popular with private investors and retail traders. Life changing gains (and life changing losses) can be made on this sector. Back the right minor and you can see stocks appreciate in value several-fold, although the vast majority never amount to anything other than value destruction through endless placings.

In this article we’ll look at some charts from the sector from both some of the market’s top mining stocks as well as some of the small cap stocks.

It’s a global exporter to Europe and Asia and is a FTSE 250 constituent.

The company has had a rough time over the years. Here’s the share price performance from the commodities crisis in 2015.

The company rose spectacularly for two years but since then has been drab. 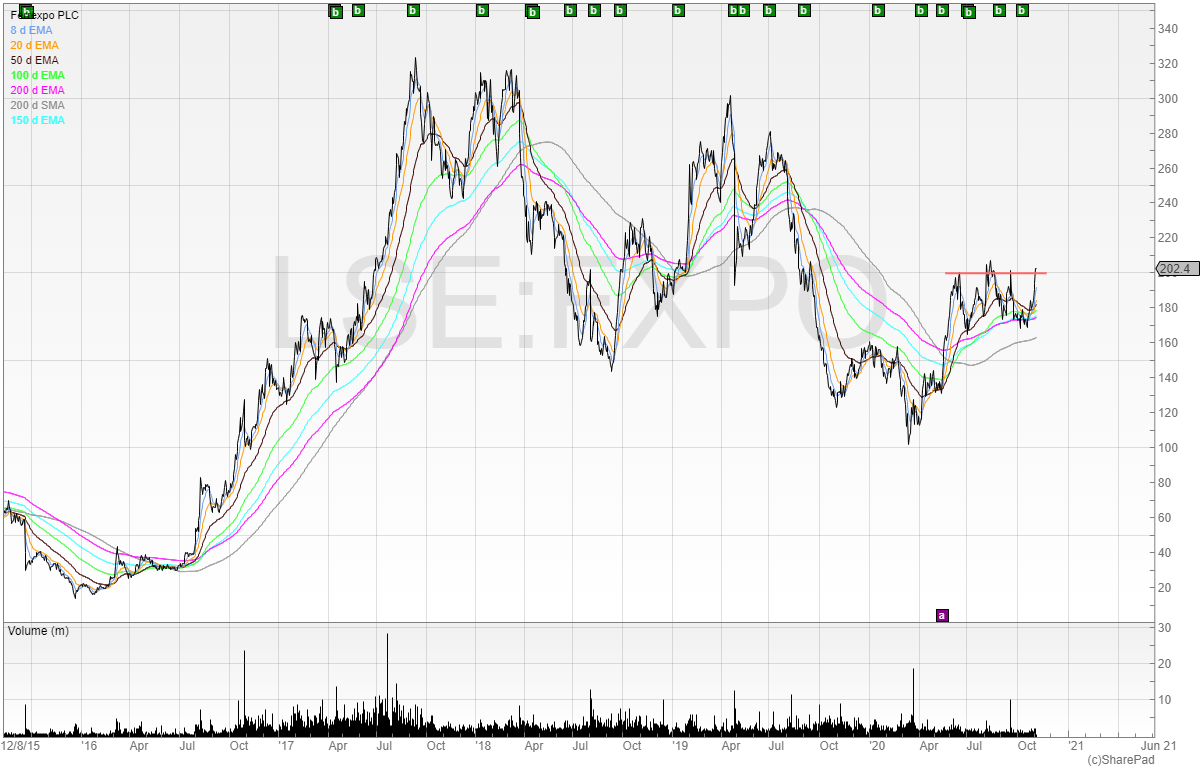 However, in 2020 the stock is looking perkier. We can see that 200p has been a key level of resistance.

The stock has struggled to break through this area with several fake-outs. 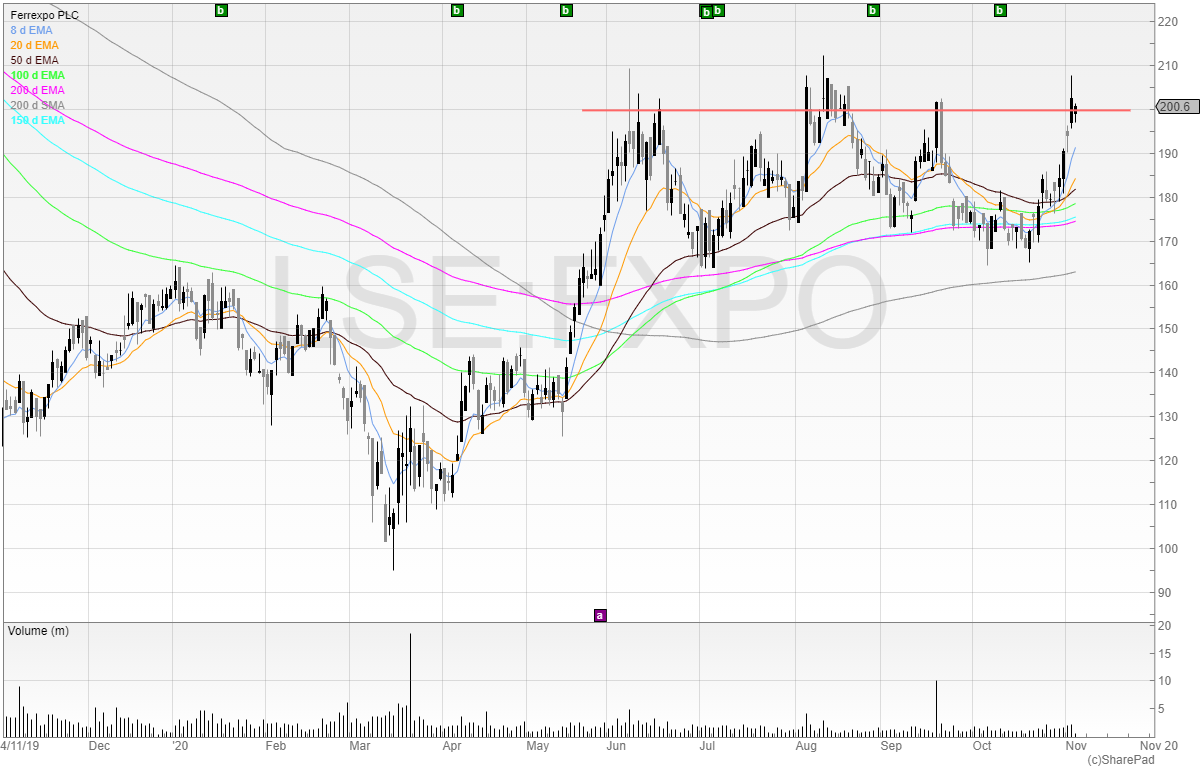 It needs to cleanly break through the high at 212p for it to then have a good run. I’ve got an alert set at 208p so I’m alerted to watch the stock before it breaks.

Fresnillo is one of the world’s largest silver mining companies as well as one of Mexico’s largest gold producers.

It has seen a stunning rally in 2020 and we can see from the chart that the stock is now consolidating. 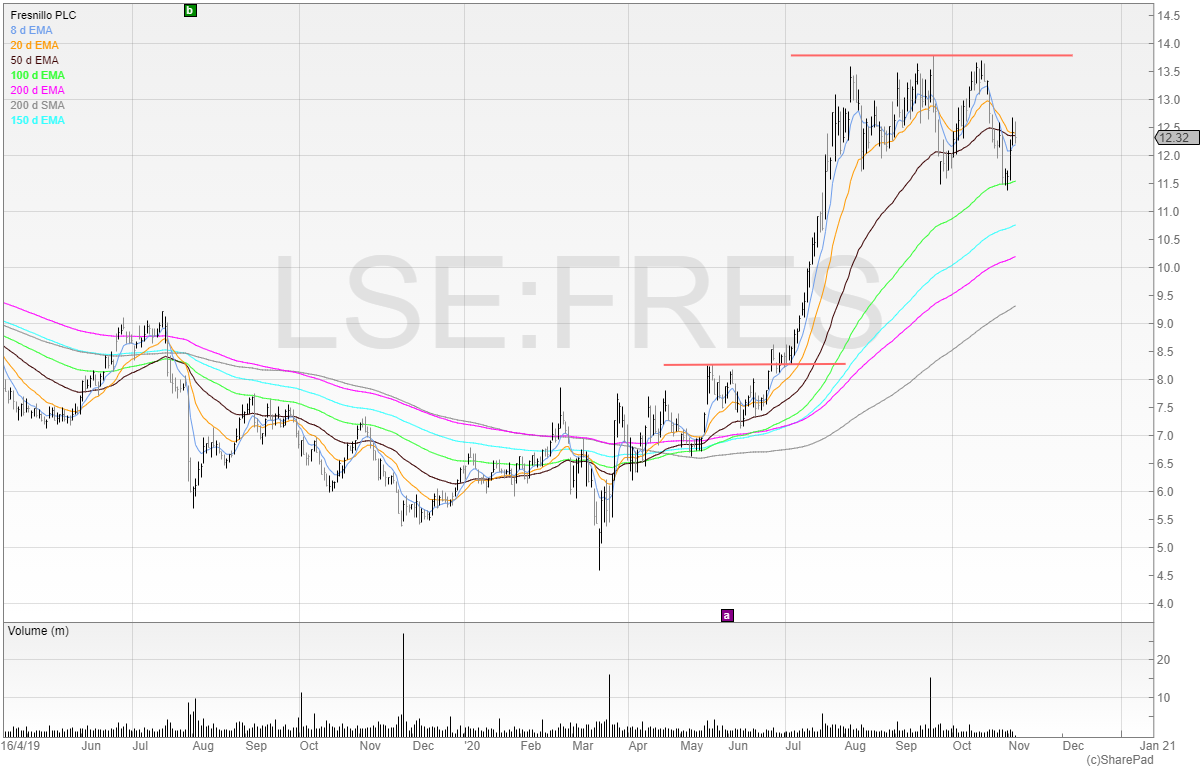 However, this is not a chart that I’m much a fan of when I look at it. The stock is putting in lower lows. The range is widening too. Ideally, I’d like to see the stock consolidate on narrowing volatility and declining volume. That would signal that the stock is reaching an equilibrium point ready for a further move.

Instead, we’re seeing larger volatility and the stock is well off its recent highs. I won’t have anything to do with Fresnillo unless it can get back to near the highs.

Anglo American is one of the more well-known mining companies on the exchange. It has interests in many commodities including copper, coal, iron ore, but has a large exposure to platinum.

It also owns a majority stake of 85% of De Beers which is the world’s largest supplier and marketer of rough gem diamonds. 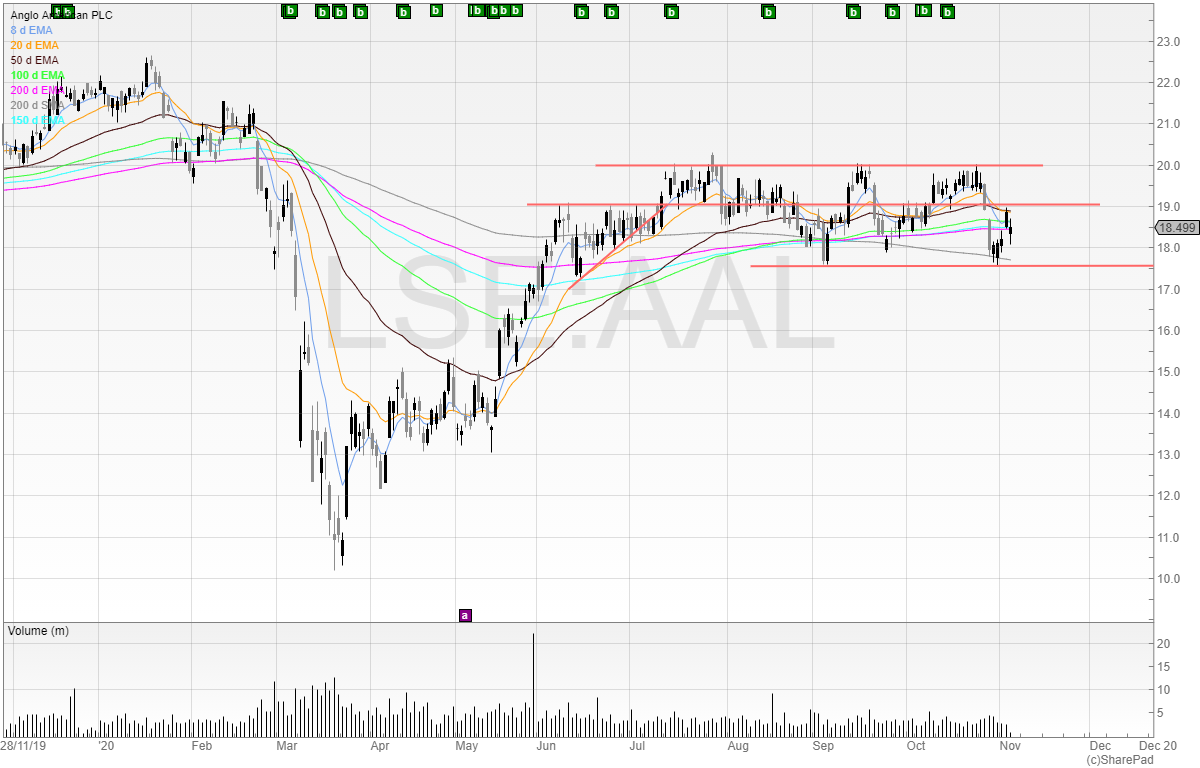 Finally, we can see that 1760p has also provided support on the bottom line.

Again, I’m only interested in going long this stock if it can break 2000p. I don’t see the point of holding and hoping – I’d rather buy at the time of least resistance when it’s more likely that the stock will continue to move upwards.

Asiamet Resources is a classic example of why you should bank profits along the way – or even better just follow the trend. 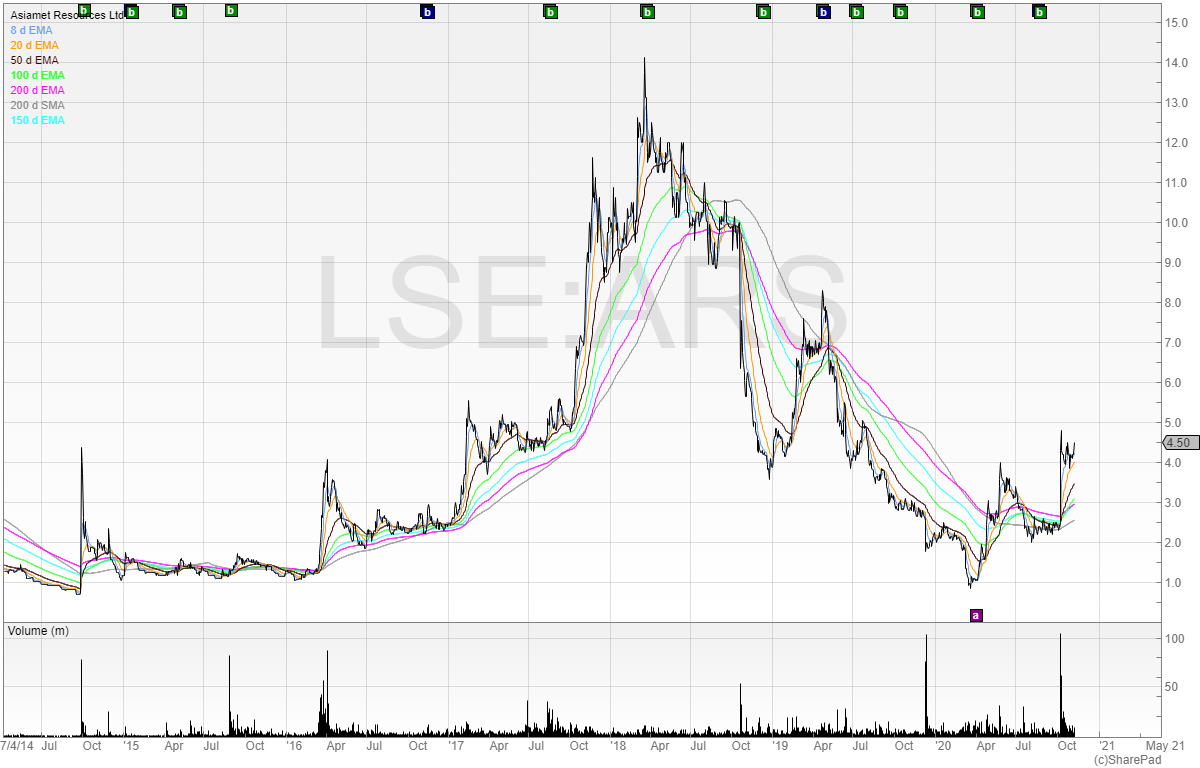 In 2020, the stock has had a brighter future. Let’s look closer. 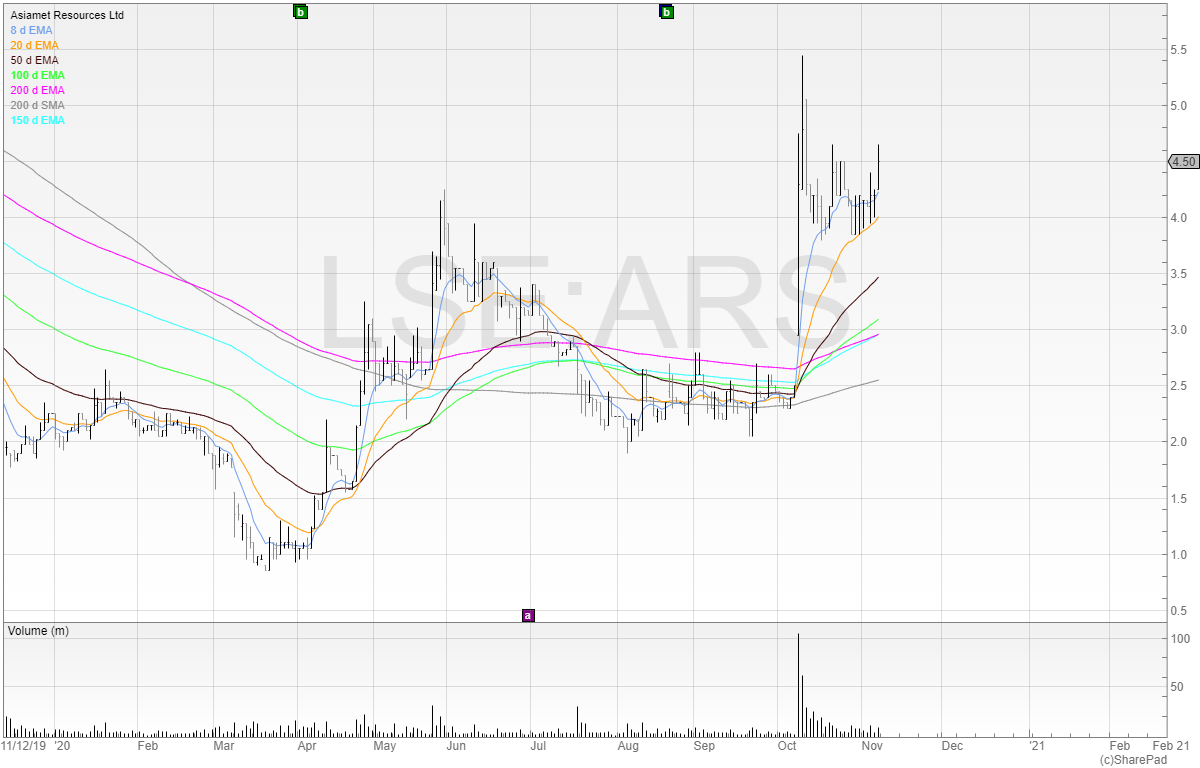 In early October, we can see that there was an RNS that spiked the price. Since then, the price has given some back but is now looking like it could be ready to move north.

I no longer hold but would be interested if the stock can break out or if there is a piece of news that will propel from the stock higher. Trading from news is a great strategy as we are buying momentum from the off.

The completion of this transaction was expected to take “approximately 30 days”. The price may come off if this doesn’t happen. If the deal doesn’t go through (it is a proposed transaction, after all) then we are likely to see a fall.

As a trader there is little point risking this and so I find it best to wait for the card to be dealt and play the card that is in front of me.

BP is a stock that excites many a retail trader. But the trend here is clearly down.

Despite the stock rallying heavily from the lows in March, the price has trickled down to plumb lows not seen since 1994.

Personally, I would like to avoid this stock long term. Unless you have significant experience in the industry and detailed knowledge of the company – so much so that you are in a position to say whether the company is fundamentally undervalued or not – then what chance have you of being right? BP is efficiently priced. It’s a stalwart of the FTSE 100. My edge doesn’t lie in that sector or size, and so I’ll be leaving it well alone unless it’s for a short-term trade. 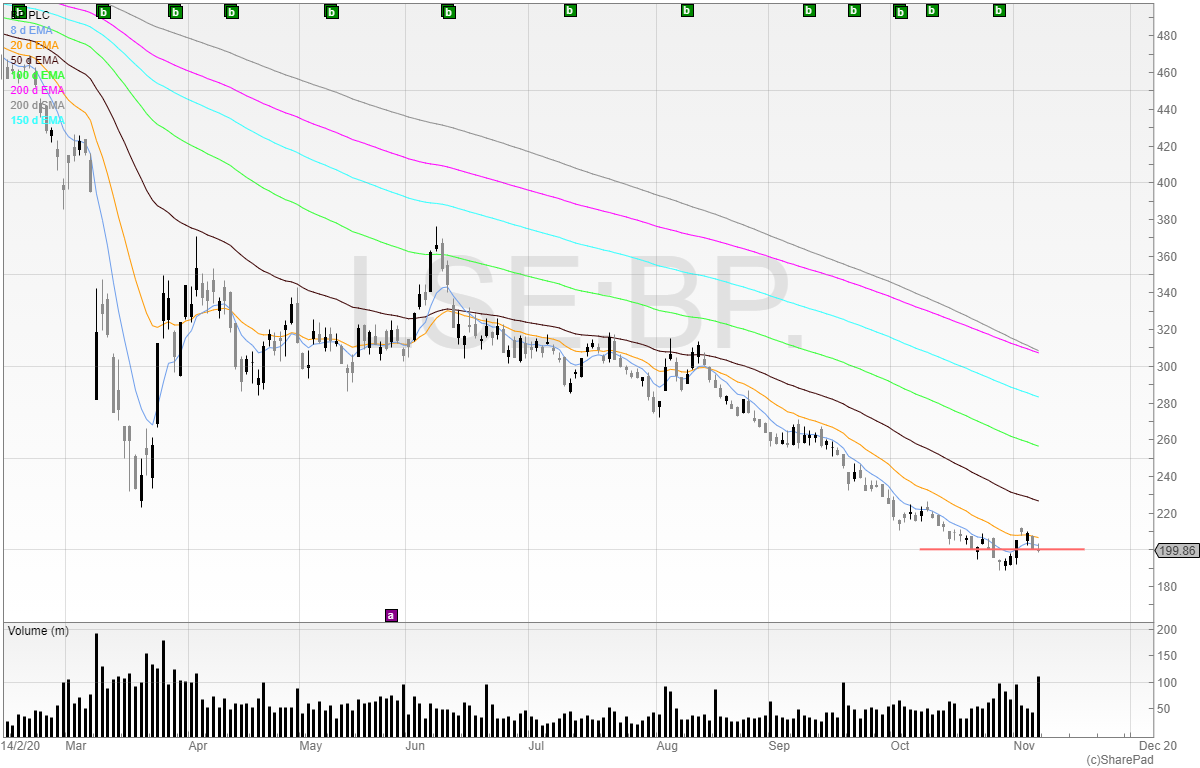 We have seen a test of the lows underneath 200p. If the price drops through it again, then we could place a long trade with our stop underneath the recent low. However, if the price falls through it and keeps falling then it could fall a long way. No company is so big that it “can’t go any lower”.

Michael has released his UK Online Stock Trading Course sharing his knowledge and how he trades the stock market. This is a full walkthrough that can be accessed in your own time: www.shiftingshares.com/online-stock-trading-course