Given the strength of the market’s rally over the last 6 months, and then last week’s sell off, I take a look at two companies that have seen management selling in late October. Users can explore Directors Dealings with the “DD” tab at the top of SharePad. Personally I like to download the data into a CSV file, but it is possible to click the “chart” button, to see a quick overview:

I’m not implying any wrong doing, company insiders can sell their shares for all sorts of reasons not related to deteriorating performance. But given the high valuations and share price performance of Water Intelligence and GB Group, I thought it might be worth pausing for thought on their investment case.

The second half of this report considers a couple of companies that I own shares in, that reported quarterly results (Sylvania Platinum) and a trading update (ULS Technology).

In 2010 American Leak Detection (ALD) reversed into Qonnectis, which was an AIM listed remote water meter reading company, that ran into funding difficulties around the time of the financial crisis. The company was renamed Water Intelligence, with the main activities being ALD (a US based water leak detection franchise business). They currently have over 140 locations across the US, UK, Australia and Canada. The company has been issuing shares to AIM investors to buy back franchises in the US.

The company says in their H1 2020 report that their corporate locations (ie not franchises) operate at a 19% profit margin. Sharepad shows that the company’s gross margin has been 77% for the last 2 years, and operating profit margin less than 10% (though gradually rising).

Following the fund raising there will be 17.6m shares outstanding, of which 15.4m are ordinary shares trading on AIM and 2.2m are B shares held by management (voting, but no economic rights to receive a dividend).

At the time of the fund raising Patrick Desouza exercised his options, but instead of receiving shares, sold them “to meet demand from investors” and received cash instead. SharePad records that in total he received £1.9m at 475p per share. He still remains the largest shareholder, owning over a quarter of the company’s shares. He is also a major shareholder in “Plain Sight” which owns 14% of Water Intelligence.

As well as being a shareholder, there is a related party transaction with Plain Sight recorded in note 26 of the Annual Report whereby they receive money for providing a licence to Water Intelligence.

Water Intelligence held net cash at the end of 2019, so it is not the case that the company is borrowing at a more favourable interest rate than is available to franchise holders. I’ve spent some time thinking about why a company that initially used a franchise model to expand, would then issue shares at a substantial premium to tangible book value to buy back its franchises. RoCE is 13% according to SharePad, but I do wonder if the growth strategy only works if the company can continue to raise equity at a high multiple of tangible book.

In the going concern statement the Directors acknowledge that the Group in the near-term is funded mainly on cash generation of its ALD franchises. Note 27 of the accounts mentions a claim brought by a former franchise holder against the company, over a dispute about the reacquisition price.

Water Intelligence shares are up 90% from the previous market peak at the end of February this year, and are now trading on 38x forecast earnings. Price to tangible book value (H1 2020) was 18x. An examination of the cashflow statement in SharePad shows that the company has consistently issued shares over the last few years and diluted equity holders (line is highlighted in green), without which “net change in cash” would have been negative (figures in red). If I held the shares I think I would be tempted to follow the Executive Chairman and convert some of that gain into cash.

GB Group is an AIM listed identity and data intelligence company. Its technology allows companies to verify their customers and staff for fraud prevention, risk management, compliance and customer on-boarding services. With headquarters in the UK, GB operates across 16 countries, and has customers in 72 countries.

Trading Statement for H1 to end of September

The trading statement said the company had performed well during its first half (April-September), with total revenue expected to be £103m for H1, and adjusted operating profit of £27m for H1. Net debt has reduced to £2.7m, down by £32m since the end of March. Earlier in the year the group had suspended its dividend, but has now declared an interim dividend of 3p per share and re-instated Executive Director bonuses. The company says FY 21 revenue should be flat on last year (FY 2020 £199.1m) and consensus is now for £44m of adjusted operating profit.

Unusually GB Group doesn’t have an Admission Document, because it moved to AIM from the LSE main market. At the time (July 2010), the reason for the move to AIM was given as “greater flexibility to supplement organic growth with complementary acquisitions since corporate transactions can be executed more quickly” on AIM. At the time of the AIM listing the share option scheme was amended to allow for dilution from 10% to 15%. The Board also said that it had misinterpreted the rules of the share option scheme, and had granted more options than it would otherwise have intended. So it looks to me as if the move to AIM could have had more to do with management incentives and shareholder dilution.

The aim of this report is not to be a “Muddy Waters” style bear raid on a stock. Instead I’m listing out a few items on the SharePad “Financials” tab that might give me pause for thought if I owned the shares and saw director selling: 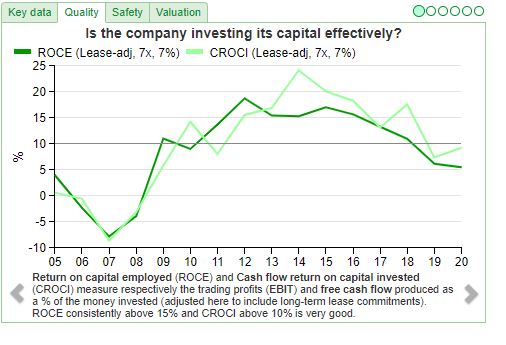 Trading at 8.5x revenue, this implies to me that expectations for future growth and profitability are demanding. I don’t own the shares, but if I did I might be thinking about following the Chief Executive and CFO, and selling some shares.

This South African based platinum company extracts Platinum Group Metals (PGM) from chrome dump tailings (ie the waste product of chromium mining). The price of platinum (currently $883 per ounce) is set in dollars, yet most of SLP’s costs are in South African Rand.

The platinum price has been in the doldrums for the last 5 years, in part because a major industrial use for the precious metal is diesel catalytic converters. Ever since Volkswagen was caught tampering with emissions testing, sales of diesel vehicles have been on the decline. At the current price, roughly 80% of the platinum mining capacity in South Africa is loss making.

But fortunately the other similar metals, Palladium, Rhodium and Gold, which are described as “4E”, an industry term for “basket price” of all the different PGMs, has risen 71% to $2,834/ounce.

Hence although the company mined 17,972k oz 4E PGM down 14% from Q1 last year, revenue was actually up +33% to $41.5m and profit. SLP’s operations have been running at full capacity since June, previously South Africa had a hard lockdown for all of April. We are now entering the summer in the southern hemisphere, so Sylvania shouldn’t suffer another lockdown for at least 6 months.

However the reduced mining operations at chrome mines leads to lower volumes of run of mine (“RoM”) and so the material they work with results in lower PGM feed grades. Cash costs were $652/ounce which is obviously very encouraging compared to the $2,834/ounce basket price.

Cash balance was $60.9m at the end of September (v $26.6m Q1 last year). Market cap is £190m so a substantial 25% of the market cap is cash. The Group holds a large majority of its cash in South African Rand and converts to USD “at opportune times”. They actually reported a $1.6m gain because of Rand currency movement against the dollar. Making a small profit in currency movements makes sense to me, as long as they don’t start buying bitcoins.

Sylvania believe that they will reach their production target of approximately 70k ounces of PGM’s for the year. Annual platinum supply is 7.1m oz and demand is 7.4m oz according to the World Platinum Investment Council. In popular imagination platinum is thought to be more expensive than gold, but actually the connection to diesel catalytic converters has meant that the precious metal trades at a 54% discount currently (Gold $1905 per ounce) the widest it has ever been. If you’re interested in a “story” rather than just value, there’s a reasonable chance that platinum demand picks up because of use in hydrogen fuel cells (proton exchange membranes). Platinum ETF holdings in North America have surged by 543k oz since March, as traders are beginning to see the metal as an undervalued gold proxy. I’ve included a couple of charts from the WPIC below.

Risks include that the supply of tailings will be harder to come by from host mines if chrome mining becomes uneconomic. This is currently impacting on feed grades. In the past Sylvania has also suffered from water constraints and power outages (the South African electricity grid is unreliable). 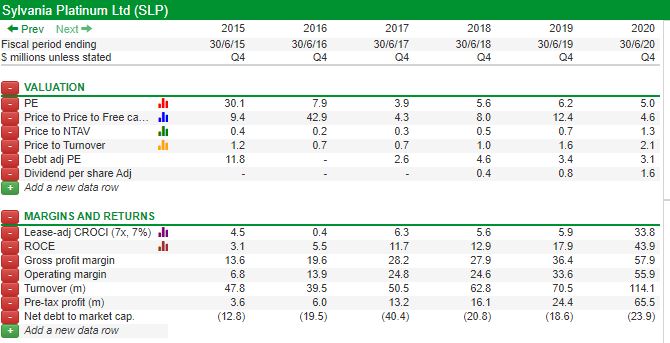 I own the shares and pitched this as an idea at a CFA “stock slam” a couple of years ago. I lost the popular vote on the night: the other CFAs thought Tinkof Bank (listed in London, but headquartered in Moscow) was a better idea. But Mr Market disagreed with the popular vote, and I won because SLP shares were up most 12 months later.

ULS Technology, the online conveyancing platform, whose Chief Executive left in early October with immediate effect, released a trading statement for its H1 (to end of September). Revenue will be £10m down 31% v H1 last year, but despite this the group managed to stay profitable.

As noted a couple of weeks ago, revenue was expected to fall, partly because the group had lost a couple of large contracts last year. The more structural reason that revenue is falling is the transition from an online system that lets mortgage brokers choose conveyancing solicitors, to DigitalMove, which is a more sophisticated secure workflow management system. In H1 they launched a Solicitor Portal which allows solicitors to instruct cases directly using DigitalMove, independently of the Group’s conveyancing comparison platform. In order to encourage solicitors to sign up, they are offered the service for free, and ULS hopes to make money from ancillary services (eg property searches) and other moving related necessities (eg utility contract changes).

The company says that they have good revenue visibility for the next few months, because the surge in mortgage instructions since June has not abated, and it takes a month or two for instructions to convert into completions (when they get paid). 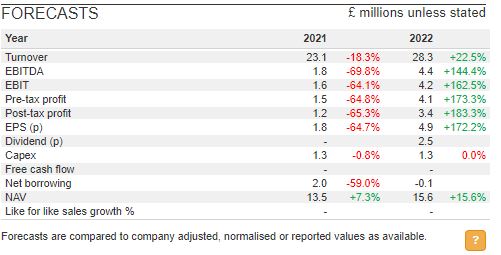 Despite this visibility, the outlook statement is vague, talking about positive industry trends (such as the stamp duty holiday which lasts until March) but not giving much of a clue overall about how the transformation is progressing. Broker forecasts were nudged upwards following the statement but are still forecasting -28% drop in FY 2021 revenue to £23.1, with a rebound to £28m and a healthy PBT of £4.1m and EPS of 4.9p in 2022. H1 results should be released in a month’s time.

Two days earlier they had announced a new Chief Executive who starts in January next year. Jesper With-Fogstrup*, formerly Global Head of Digital at HSBC, and before that COO of comparethemarket.com. As noted, in my weekly at the start of October, this was an odd time for the previous Chief Executive to be replaced if the company’s transition was going to plan. Yet the broker upgrades imply that the migration to the new platform is progressing well.

The author owns shares in ULS Technology and Sylvania Platinum

*His name is an anagram for “froth rejigs upswept”