The Trader: A look at the automobile sector

The automobile sector is not one I usually deal in. However, by using the RNS service each morning and sifting through company reports, it’s easy to keep on top of various sectors and how they’re performing.

Customer spending has seen a large boom as people are restricted from going on holiday and eating out (aside from the Eat Out To Help Out period). It is now difficult to order a sofa or a carpet in time for Christmas, such is the backlog of pent-up demand.

Another industry that has seen an increase in spending is the car industry. Despite lockdown shutting car showrooms some have experienced huge turnarounds.

New car registrations were meaningful, and record levels of used vehicle gross profit was generated in the month of July. 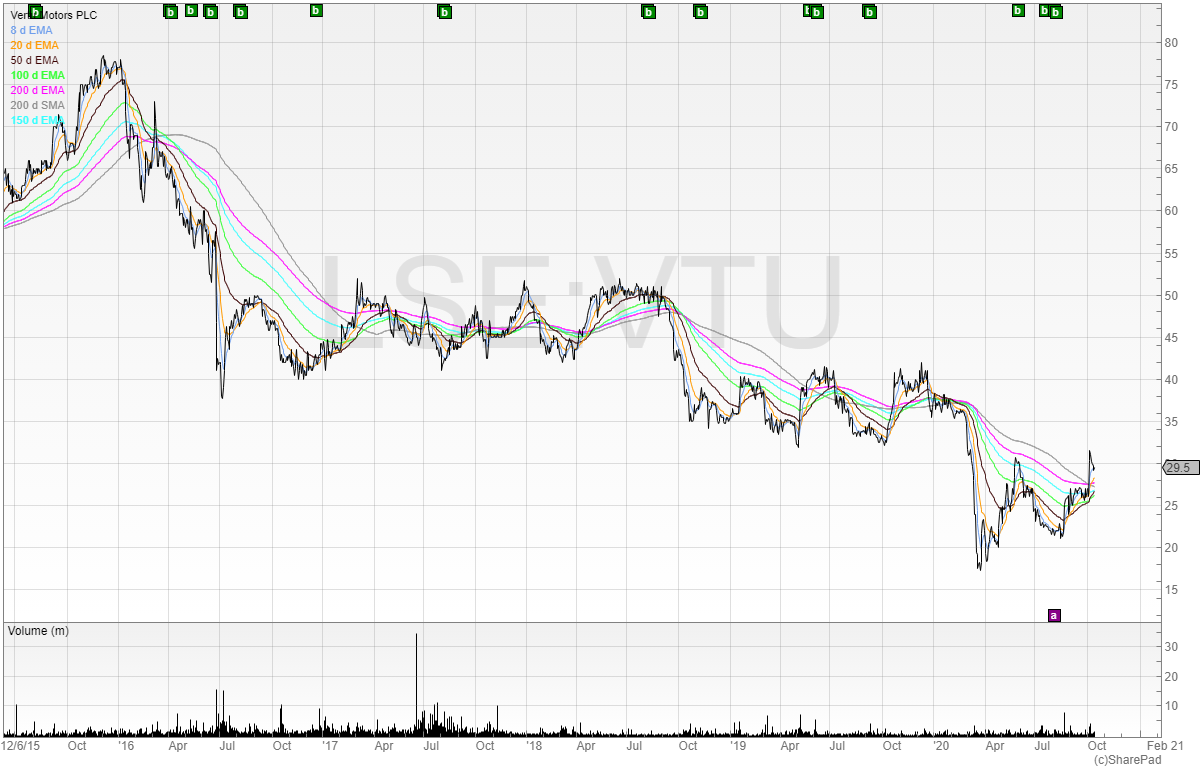 It’s fallen a long way and currently trades just under 6x earnings. There is clearly not much priced in for Vertu although it’s not a sector I would ever invest in. But we can see on the right-hand side of the chart that the price is well off the lows. Let’s look closer. 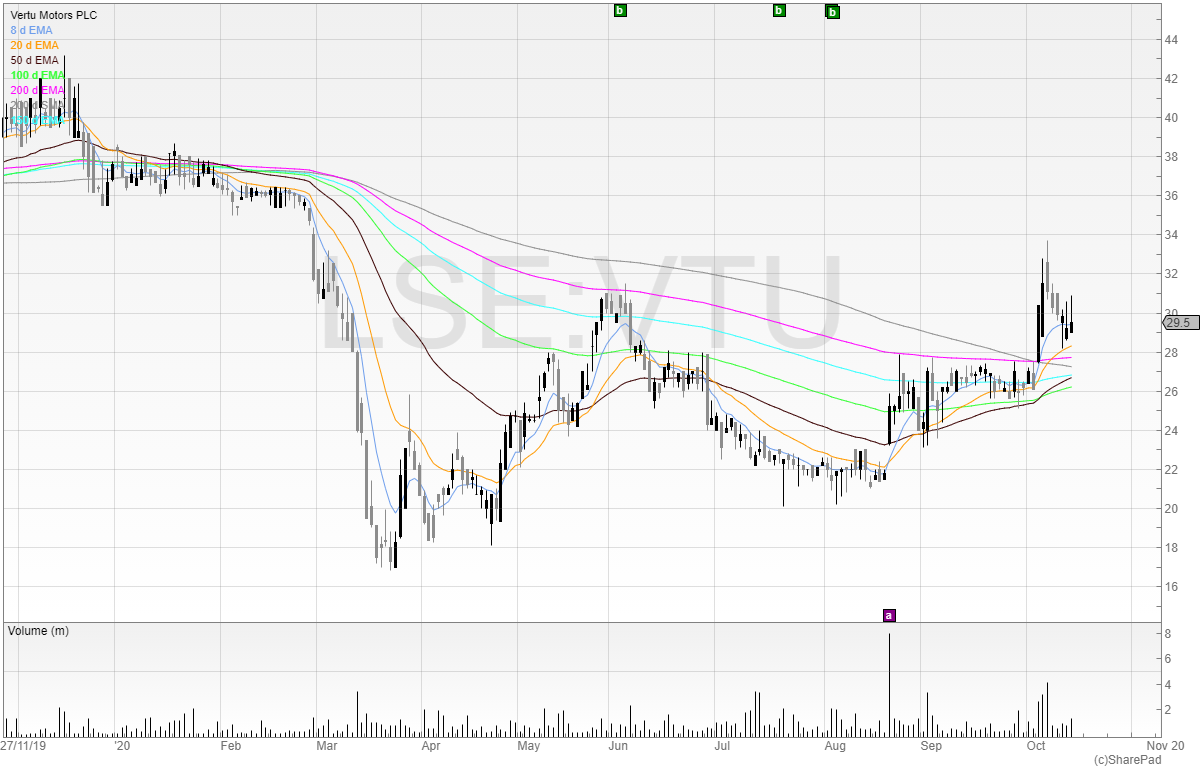 The stock appears to have now bottomed and we can see has passed through the resistance of the 200-exponential moving average (pink line). The price is now trading above all of these moving averages too. This would never be a long-term trade for me but it looks like the stock is forming a scruffy cup and handle, with the cup forming in June when the stock failed to break the pink line, and the handle setting up at the start of October.

I’ve got an alert set as the stock trades up to around 32p, as I’d like to take a long position from the breakout of the recent high.

Motorpoint is company that is not for the faint-hearted. Mainly because it has huge falls and big rallies. But looking at the chart we can see that the price is not much improved from its IPO price, yet has traded a lot of the time at less than half its opening price. 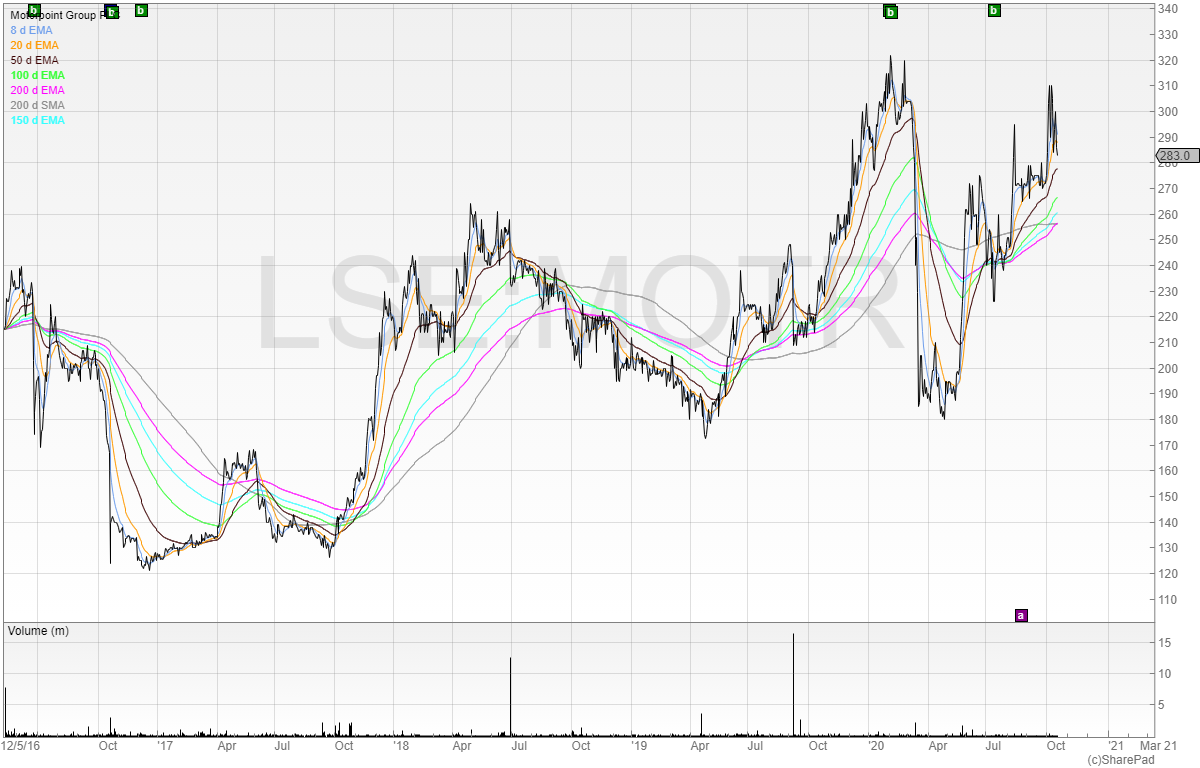 However, in recent trading the company announced it was trading ahead of expectations. 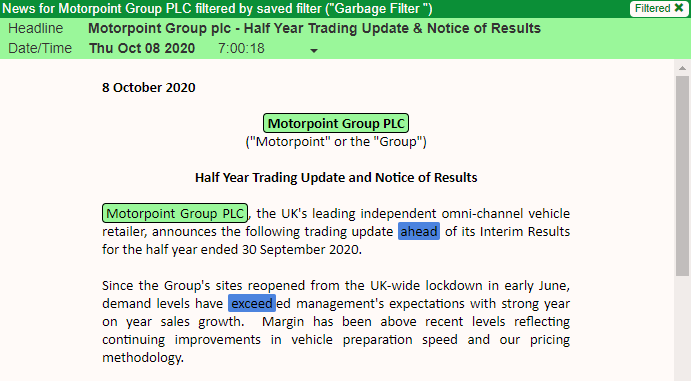 Margin had also improved, and sales growth had been experienced.

I have marked an arrow on the chart on the date of this RNS. 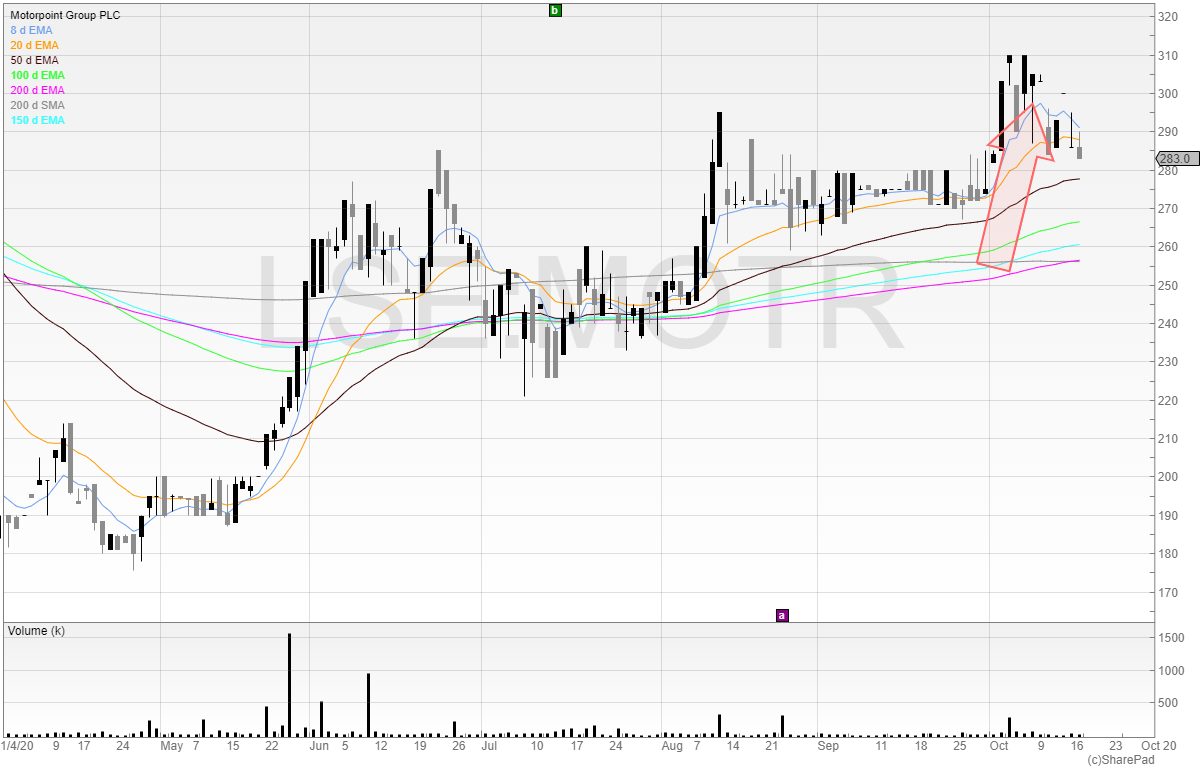 Despite the strong trading update, the price has come off. A stock selling off on good news is rarely a positive sign, and so I’d be inclined to leave this stock alone until more cards are revealed or the stock grinds up to its previous high of around 310p.

Cambria Automobiles is a company that is SETSqx traded. It’s not the most liquid of stocks and therefore not one I’d be inclined to touch either. Looking at the chart, we can see that the price barely moves as so few ever deal in this stock. 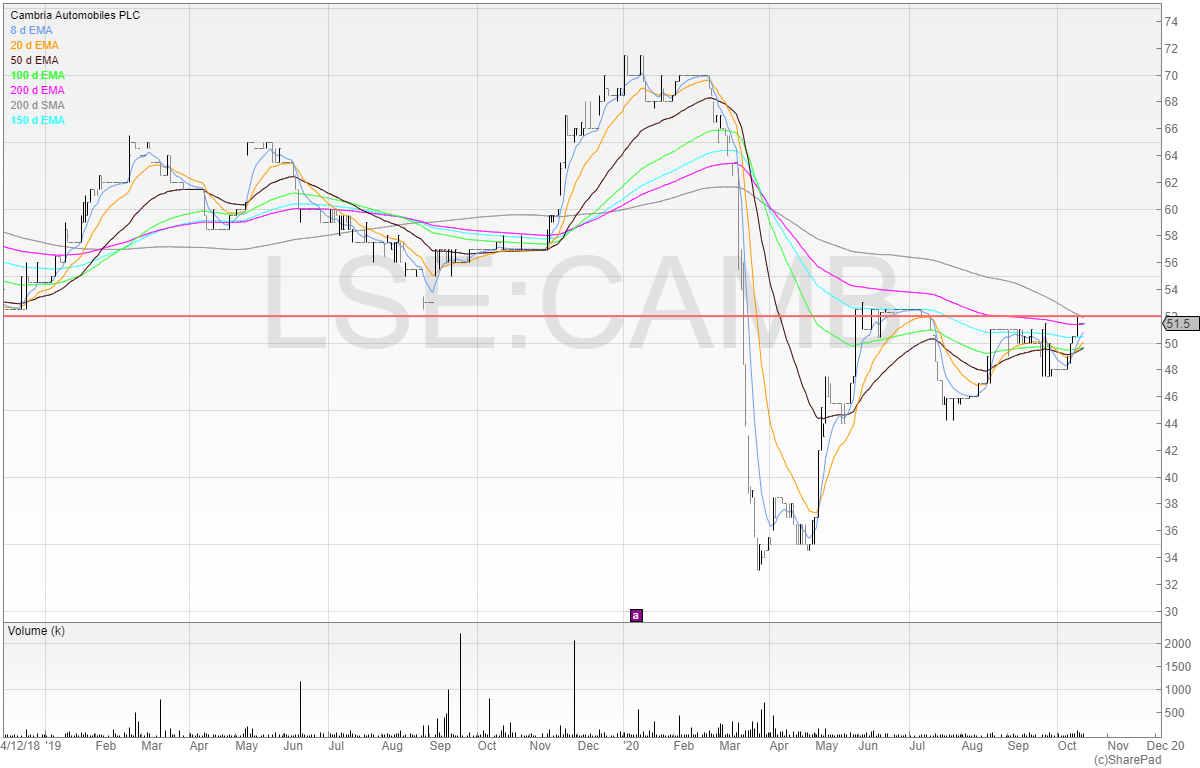 The stock is approaching a historical support and resistance level, but again I’d be inclined to leave this stock well alone.

However, for the brave there could be opportunity. Looking at the company’s recent Pre-Close Trading Update we can see that Cambria too has benefitted from positive trading. 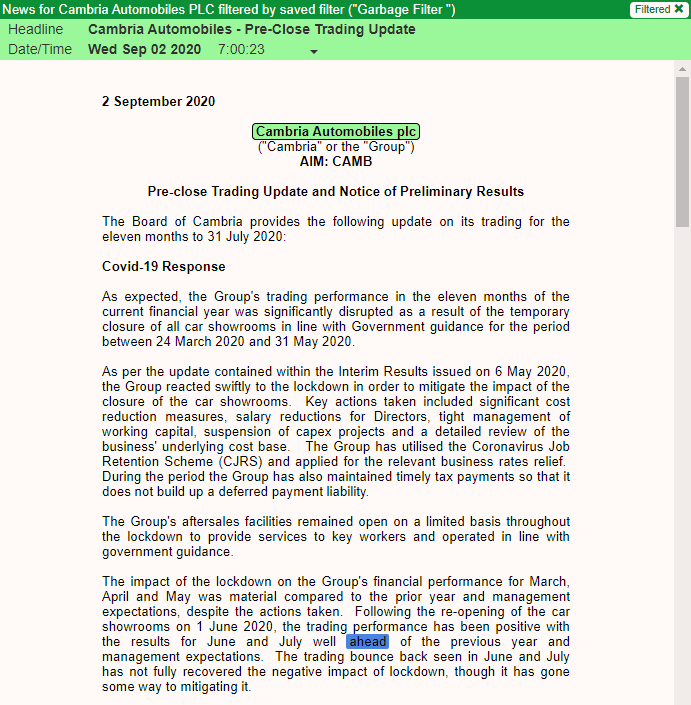 This seems to be a commonality across the whole industry and perhaps there is a read-across to other stocks too.

Auto Trader isn’t a car dealership, but it does offer the opportunity for others to sell cars. Auto Trader is to the car industry what Rightmove is to the housing market. It’s a scalable platform that benefits from the network effects of having more eyeballs on the platform and increasing the attraction for sellers.

But has Auto Trader seen the same beneficial effects of pent-up demand that car retailers have seen?

Here is a snapshot from the company’s results in June. 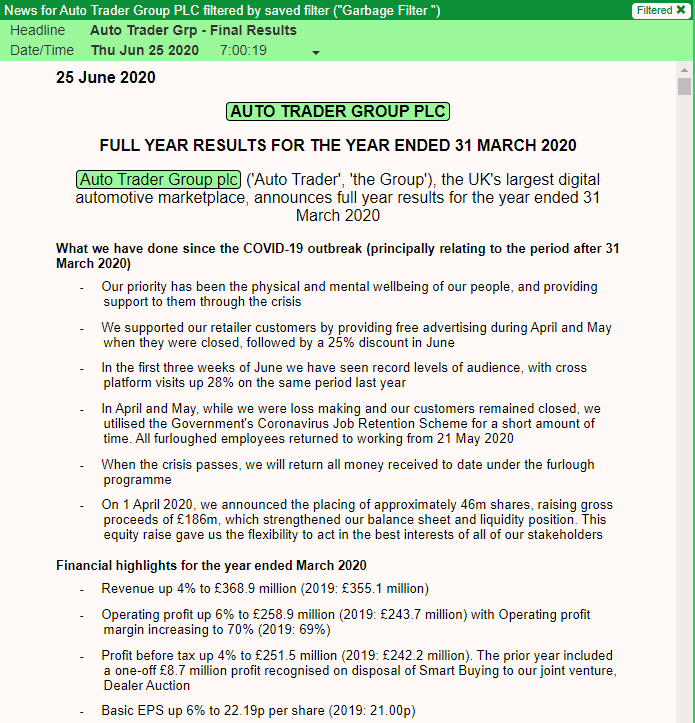 Top line growth is not impressive but what matters is the chart. 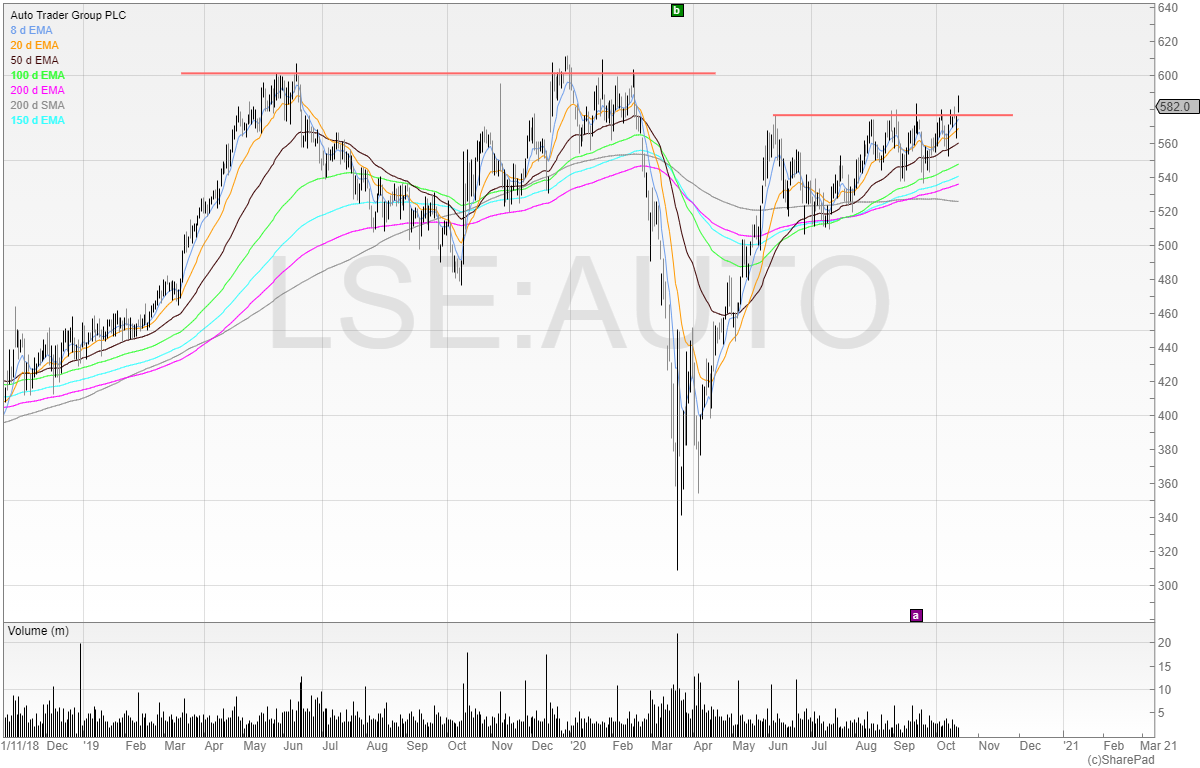 We can clearly see that the stock has broken out of a level of resistance that has been around at 575p. The next big level of resistance will come at the big round number of 600p. However, should the stock break out of this level we would be buying when we don’t have any real idea how the business has been performing.

There is a summary of the business from March to June, but as we are now in the middle of October this is now three and a half months of little visibility.

I would to wait until we see how the business is doing. It could surprise to the upside, and gap up, or it could be worse than expected. It is an unnecessary risk to ride a position into earnings. Why gamble, when we can trade the reaction?

The sector is currently riding a wave of pent-up demand, but how long is that going to last?

We are likely going to see a big recession. Already, people are fed up of lockdown – especially the self-employed who are being decimated by forced closures.

There has been a trend of home improvement and so far buying and selling cars. But in these charts I would only be interested in trading Vertu Motors and Auto Trader if it breaks 600p after an in-line or better than expected earnings release.

Michael has released his UK Online Stock Trading Course sharing his knowledge and how he trades the stock market. This is a full walkthrough that can be accessed in your own time: www.shiftingshares.com/online-stock-trading-course