I have a new addition to my Dynamic 35 list of investment trusts and closed end funds. It is called RTW Venture and it is a venture capital fund which invests in life sciences businesses – mainly in the biotech and MedTech space. Its key differentiator is that it invests in later stage private businesses which are aiming to list on the public markets in the next few years. 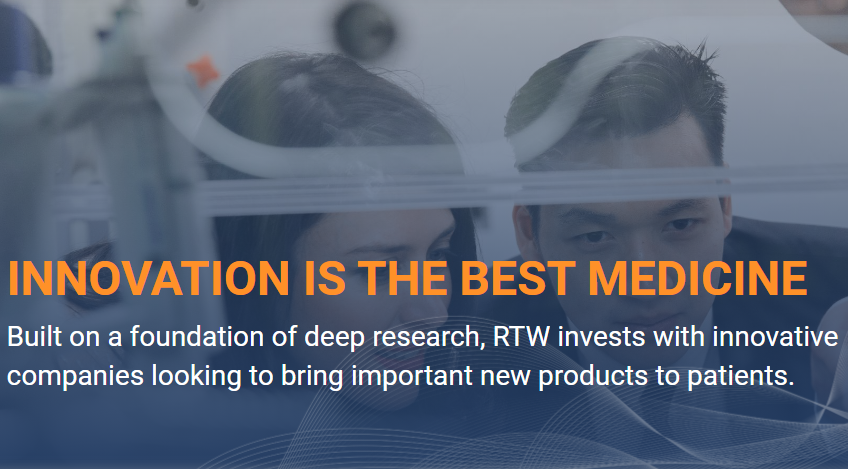 Now my guess is that despite being in a very exciting space – more on that in a moment – most investor’s will not have heard of the fund and that’s largely because it’s currently listed on something called the specialist funds market (SFM) which is heavily institutional in nature. Also, RTW has a much better-known peer in the shape of Syncona, which is a main market life sciences VC with a similar strategy. My suspicion is that if an adventurous type is interested in this risky niche, they’ll probably be invested in Syncona – which also boasts fairly extensive research coverage by the big brokers. Syncona is an existing member of our Dynamic 35 list.

The table below stacks up some numbers for the two funds, with RTW on a smaller 8.2% premium compared to Syncona’s 11% premium.

Last but by no means least I think it’s also fair to say that RTW didn’t have the most auspicious start to its life as a public fund. According to Numis the fund raised $14.97m through the issue of 14.4m shares at $1.0397 back in October 2019 but had intended to raise up to $350m. The fund had net assets to c.$168m at launch, including cash and seed assets rolled over from existing shareholders.

RTW describes itself as a full-lifecycle healthcare investing with a special focus on transformative biopharmaceutical and medical technology assets. Jargon aside RTW is – as I have noted at the beginning – a classic late stage VC focused on life sciences (biotech and MedTech). In a sense it’s a bit like a biotech version of Merian Chrysalis – many of the portfolio businesses are one’s where an IPO within the next 1 to 3 years is likely.

There is also a crucial difference when compared to Syncona. The latter has a much more focused, “ in house” approach where it’s managers picks the key therapies, usually on a common or shared technology platform (based on genomics insights) and then builds up a bunch of world class businesses by assembling the right team.

By contrast RTW takes a more classic venture capital perspective. It invests in businesses and therapies it likes but has (slightly) less operational involvement (compared to Syncona). There is also a much more global focus to RTW with a growing side specialism in Chinese investments.

So, why do I think it worth investing in another Life Sciences VC bearing in mind that Syncona is already on the Dynamic 35 list. My core contention is that for any growth investor looking to ride long term trends, some exposure to the life sciences space is an absolute requirement. Personally, I aim to have about 20% exposure to life sciences in an adventurous portfolio. Crucially I would prefer to weight that exposure to private businesses i.e life sciences firms that are not listed on the public markets yet. My hunch is that the fastest growth and most interesting new technologies sit inside this global private equity space. To access this, you need an active fund manager and currently your only two choices on the London market are Syncona and RTW. As I have already explained, both have a distinctive approach and I think a sensible, adventurous type can and should have both in a portfolio. 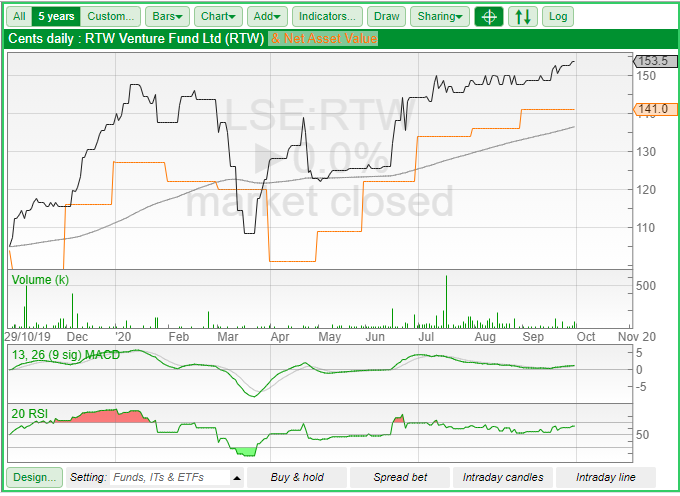 As the fund is still very young, its not worth dwelling too much on performance numbers but I would pull out some useful stats from the interim report which was released a few days ago. It doesn’t contain too many surprises – overall the fund has seen Nav growth of 28.5% since its IPO last year, and the Nav is currently sitting on $1.34 per share, or $238m in total. There’s also cash of $49m, which should be enough ready capital to invest in new firms and follow ons. As for portfolio returns the fund says that the key drivers of NAV growth (5% in the most recent period) includes “ the IPO of Avidity (ticker: “RNA”), contributing c. 5 per cent.; strong share price returns (+33%) from Frequency (ticker: “FREQ”), contributing c. 1 per cent.; and the performance of non-core portfolio assets, contributing c. 3 per cent. Rocket (ticker: “RCKT”) share price returns (-8%) overall detracted c. 3 per cent. from the Company’s NAV return, despite the strong price action (+50%) in the second quarter of 2020”.

What’s in the portfolio?

The interim report does contain some useful information on the portfolio. Here are the key numbers:

The biggest holding is a firm called Rocket which at one stage was over 50% of total fund value but is now down to a still chunky 26% of fund NAV. That makes RTW Venture very dependent on this publicly listed biotech firm and the direction of its share price. Here’s RTWs description of Rocket.

“Rocket was formed in 2015 out of the work of academic institutions in the US and Europe and was listed on the Nasdaq Global Market in January 2018. Rocket is focused on developing first-in-class gene therapy treatment options for rare, devastating diseases. Two of Rocket’s clinical programs are a lentiviral vector-based gene therapy for the treatment of Fanconi Anemia (FA), a difficult to treat genetic disease that leads to bone marrow failure and potentially cancer, and an adeno-associated virus-based gene therapy for Danon disease, a devastating, paediatric heart failure condition. We believe opportunities exist to license additional gene therapy academic assets into the Rocket pipeline in the future. Rocket has a broad pipeline of five disclosed programs, and we anticipate additional programs will be added to the pipeline. In addition to our control position in the company working alongside the Investment Manager, Rocket’s generous pipeline diversification of now five clinical programs creates an attractive risk reward opportunity, giving us comfort in owning an outsized position in the company”.

The graphic below, also from RTWs interim report, lists the other key holdings. 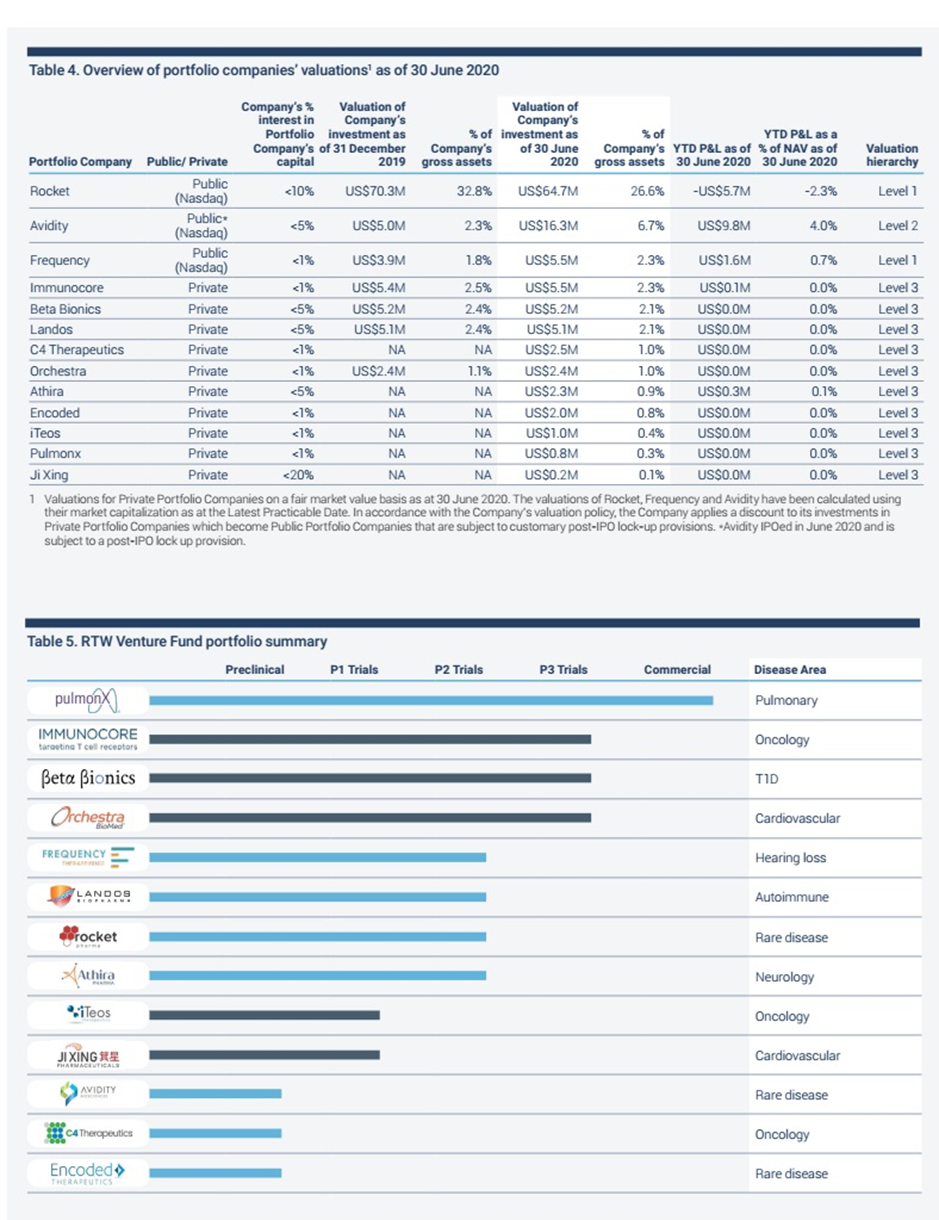 RTW has also been fairly busy in 2020 adding new holdings to its portfolio. These include the following:

Investing in venture capital is a risky enterprise at the best of times. Add in investing in private life sciences businesses whose key products might never make it past late clinical trials , and then layer in the recent rally in tech stocks generally, and I think it safe to say this fund (along with Syncona) is absolutely not a widows and orphans stock. If there was a measure from 1 to 10 of risk, with 10 being the riskiest possible, RTW would probably be in the 8 to 10 region and investors should absolutely steal themselves for possible 10 to 20% corrections in difficult markets – possibly even more if there was a stock market wide meltdown.

And RTW also has some ‘idiosyncratic’ challenges, specific to the manager and their mandate. The most obvious one is that over a quarter of the fund’s value is tied up in one, listed biotech firm – Rocket. That share price will almost certainly go violently up and down and that will have a knock-on impact on RTW’s share price. To be fair Syncona has the same challenges, which makes the share price of these VC funds very volatile.

It is also worth reminding investors that only 4 of the portfolio companies are in the late clinical stage of trials – so revenues for many of the funds are many years away. The longer list of businesses at Stage 1 and 2 will also require a large amount of additional investment to get to this last stage – all of which will place funding pressures on RTW over the next few years. My guess is that it’ll be looking to raise extra money via placings in the next six months. If not, it might possibly struggle to finance a few years pipeline of follow on capital requirements.

I think adventurous types could very happily have both Syncona and RTW Ventures in a growth portfolio. In truth I would also be tempted to add another listed life sciences fund called BB Biotech which invests in publicly quoted biotech and medtech businesses and has a London market listing. These three life sciences funds – Sycona, RTW and BB Biotech – would give the adventurous investor a really potent three stock/fund exposure to what I believe is the single most important thematic trend of the next few decades. Forget the cloud, Ai, batteries and so on – for me the focus is on the massive changes coming down the track courtesy of genomics and new medtech.

“The Q2 numbers demonstrate the “investment thesis of investing in late-stage companies with a view to listing them on the public market. RTW Investments remains the largest shareholder in Avidity post-IPO, holding almost 11% of the shares across RTW Venture Fund and its other private funds. The company will be hoping Avidity enjoys similar to success to Rocket (27% of NAV), which continues to perform strongly. Rocket was the largest contributor to NAV growth in Q2, with the shares gaining 31% and increasing NAV per share by c.11 cents (12%).”