Last week was Chilean Independence Day. It is a little known footnote in history that Lord Cochrane, who was involved in the great Stock Exchange scam of 1814 (accused of starting rumours of Napoleon’s death via the Admiralty’s semaphore telegraph) helped not one, but 2 Latin American nations achieve independence. Following the Stock Exchange scam Cochrane was stripped of his Knighthood in a degradation ceremony at Westminster Abbey. He was sentenced to a year in prison and expelled from the House of Commons. The voters of Westminster though immediately re-elected him in the subsequent by-election. He escaped from prison and presented himself to MPs in the House of Commons, from where he was thrown back into prison.

He left London in disgrace, to end up in Valparaiso, Chile in 1818, helping the Chileans fight their war of Independence against the Spanish. He won several spectacular and decisive victories at sea, but though clearly a man of great ability also had an obstreperous side to his personality: he fell out with the Chileans and left their employment in 1822. He went on to fight for the Brazilians in their naval battles against the Portuguese for independence. He disobeyed orders to return to Rio D’Janeiro and instead sailed to Great Britain in 1825, absconding with some of the Brazil’s public money. Many years later he was to be exonerated from his role in the Stock Exchange scam, his knighthood was restored in 1847.

Interestingly we normally have to wait for bear markets for frauds and scams to appear. Despite supportive Central Banks, providing liquidity and talk of negative interest rates, so far this year we have had Wirecard, NMC, not to mention self-driving trucks that roll downhill, Lars Windhorst’s illiquid bonds and “20 second corona tests” all being the subject of articles published by journalists at the FT. I doubt these stories will all end with exoneration.

Last week a couple of litigation finance companies reported – Manolete noting a big win and RBG Holdings disappointing. Plus Keywords Studios results caught my eye, having quadrupled my money selling a couple of years ago, rather annoyingly (for me) the share price has gone on to double once more. And Integumen, soon to be known as DeepVerge plc, reporting revenue growth of +290% in their H1 results. 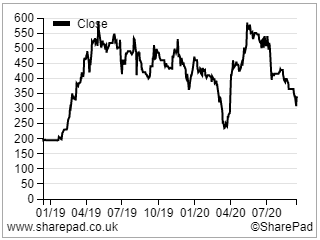 Manolete, the litigation finance company specialising in insolvency, released a trading update while the market was open on Tuesday, with the shares rising 10% to 340p, before falling back to 315p later in the week. Being a litigation finance company, this wasn’t a traditional trading update guiding forecasts. Instead, it was a notice to say that a single claim that management had previously estimated proceeds of £5.5m and fair value gain of £2m had settled for a gross amount of £15m proceeds of which £4.7m is payable in cash to Manolete. The difference between gross proceeds and gain is that the litigation firm does not earn 100% of the proceeds of a successful outcome, instead they must be shared with the claimant who originally sold the claim to Manolete. This makes sense, otherwise why would a claimant sell something so valuable if they were not going to benefit from a successful outcome too?

As is normal with litigation finance, Manolete receives its costs first (£250K), but then has to split the remaining £14.75m proceeds with the claimant. Manolete will receive 55% of the first £750k; 45% of the next £750k; 35% of the next £3.5m; and 25% of the remaining £9.75m. Notice the way that the reward structure works for Manolete, although the proceeds were just under 3x higher than management expected, the realised gain was only an extra £2.1m versus the fair value recorded on the balance sheet, because as the proceeds increase, Manolete’s portion falls in percentage terms.

As the defendant doesn’t have £15m of spare cash sitting around in a bank account earning close to 0.1%, the proceeds will be paid in instalments £2.2m in the first 3 years, then 7 annual payments of £1.8m.

Management must be reasonably certain of collecting all these instalments, because they will recognise a realised gain of £4.1m on the balance sheet or £2.1m through the p&l (net of a reversal of a £2.0m unrealised gain that had previously been recognised from the claim).

It is not clear if the brokers have actually raised their forecasts. Peel Hunt and Liberum are joint brokers and I haven’t seen anything from them. I can understand why management would want to put a statement out – recognising £2m through the p&l is material in the context of FY pre-tax profit forecasts of £14m. But we should also recognise that litigation finance companies will always report lumpy figures, by way of the very nature of the business where one or two successful cases can swing results. They will also tend to draw attention to their spectacular wins, and quietly play down the cases that they lose.

I still believe Manolete is the quality player in this space, reporting high, but volatile, RoE (see chart below) despite rapid growth. To some extent the trading update reinforces the view, but I also wonder whether it is better to wait for the inevitable disappointing update before investing. 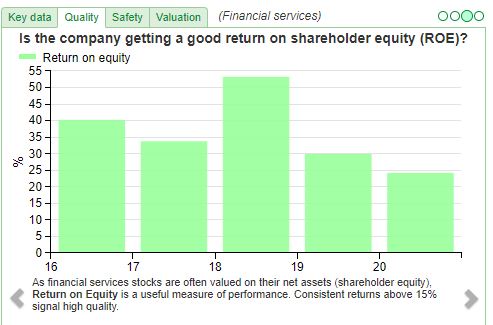 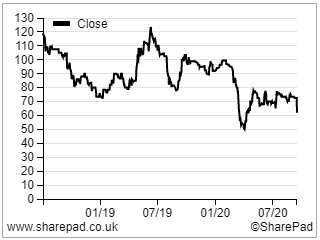 But PBT more than halved to £1.2m v £3.2m H1 last year. Net cash flow from operations was minus £400K, following a big jump in receivables.

The problem is a poorly timed acquisition, ironically in an M&A business Convex Capital, which the company bought in September last year. RBG bought Convex for £11.4m in 2019, plus £4.4m in deferred consideration. Up until this year, Convex Capital had consistently completed 12 transactions a year at an average of £700,000 (implying £8.4m of revenue in a “normal” year). This compares to just one transaction of £300K revenue so far this year, as M&A deals have been cancelled or deferred.

Mergers and Acquisitions is perhaps the most “feast or famine” industry there is. M&A economics always look very favourable at the top of the cycle, and horrible when deals dry up. The trick is to sell your business at the top of the cycle to “dumb money” (up till 2008 continental European banks have fitted the description). So well done to the partners at Convex, who seemed to have found a new source of dumb money and timed their exit to perfection. 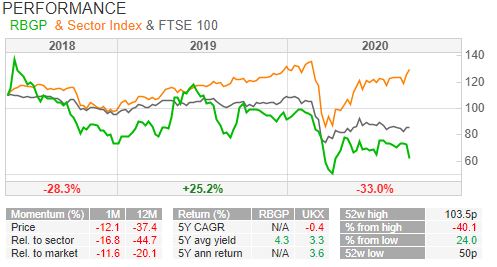 But this does rather call into question RBG’s expansion strategy, given the core business seems to be performing so well but the diversification less so. RBG has £35m of intangible assets on its balance sheet versus £43m of shareholders equity. The outlook statement is rather vague, and doesn’t fill an investor with confidence that the second half will be much better than the first: “we remain cautious about making future forecasts given the economic uncertainty. The Board remains optimistic about the Group’s growth prospects in the medium-term and will consider the evolving economic environment as we evaluate opportunities to grow and strengthen the Group.”

This looks like a business that has expanded too rapidly, and problems may get worse before they get better. I’m wondering if talk of strengthening the Group implies that management might be considering raising more equity capital? 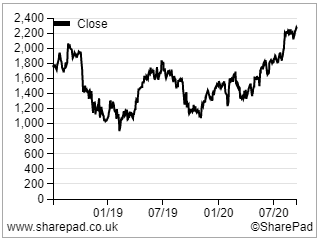 One of my poorer decisions, I bought KWS in mid-2016 for 277p. I sold less than a year later after it had almost quadrupled. At the time I sold in mid-2017 the shares were on 34x earnings, and I think 8x sales, which at the time seemed expensive for a company that was growing so rapidly through international acquisitions. In case you were wondering: yes, my mother was at the same presentation, and bought at the same price, but never sold.

Keywords was founded in Dublin by a couple of Italians (Teresa Luppino and Giorgio Guastalla) in 1998, and IPO’ed on AIM in July 2013 at 123p. KWS provides outsourced services to the video games companies. This can be culturally sensitive localisation translation (how do you translate “WHAAAM!” into Japanese?”), artwork, quality assessment (ie playing the game to find bugs) and audio services such as actor voice recordings. Currently there are over 7000 employees across 21 countries. The company works with 23 of the top 25 games companies by revenue, as this slide from their most recent presentation shows.

Keywords has been one of the main industry consolidators, and has made frequent small acquisitions (almost 50 since IPO) to grow, meaning that there is now €189m of goodwill on balance sheet, v €339m of shareholders equity.

Octopus 5.6%, Liontrust 4%. Franklin Templeton owns 4% are on the shareholder register, although the latter have reduced their stake from 9% which was reported in the Annual Report earlier this year. Andrew Day the CEO since before the IPO owns 5%.

Andrew Day earned £1.2m in 2019, of which £234K was salary and £962K was LTIP. Interestingly the Chief Executive elected to waive his bonus as most targets were missed (he was entitled to an 11% payout of maximum). This sends a positive signal about alignment of interests to shareholders I think.

KWS grew organic revenue by 8%, which was in line with guidance from the August 4th trading statement. Adjusted PBT was up 18% to €21.7m, exactly in line with guidance. The company reported €101m of net cash June 2020. Although the results were in-line with previous guidance, the shares fell 5% after results, perhaps showing the high level of expectation baked into the share price which has “ten-bagged” since the end of 2015.

Alongside the results statement, management announced the acquisition of Heavy Iron on its results day, for up to $13m consideration. Since the placing the company has also bought Coconut Lizard (up to £2m), Maverick Media (up to £3.6m) and other recent acquisitions include Cord and Laced, Sunny Side Up, Ichi and Fire Without Smoke. And I was thinking that “Snowflake” was a silly name for a technology company! 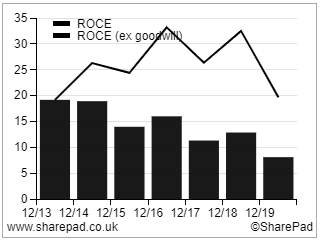 I sold too early. I’m still flumoxed how management can cope with such a geographically diverse bunch of businesses, employing so many creative people (notoriously difficult to manage) across different cultures and locations. One concern is that Returns on Capital Employed have been trending down, with and without goodwill. Rapid expansion does not add value if it does not generate returns above the cost of equity, which suggests to me that the valuation is too full. That said growth by acquisition strategy has been working for many years now, so well done to management and long term holders. 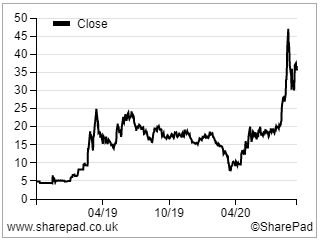 The company has technology that pharma and cosmetic companies to test consumer products on human-like skin in a real-world environment. This could be a “hype stock” from Covid, as its ability to detect the virus in sewage, has resulted in agreements with Modern Water, Avacta and Aptamer to provide alerts to authorities on COVID-19 hotspots. The company has also announced an all share offer in August for Modern Water (mkt cap £18m). The combined group will be called “DeepVerge”. I’m glad, only because I keep mis-spelling Integumen (note no “r” following “Inte”). 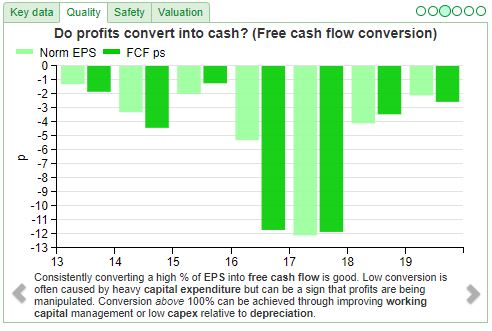 The historic numbers look horribly lost making – as the chart shows. But given the very high revenue growth this looks like a company that is at least worth following, if performance can be sustained at these levels for a couple of years the shares could be a big winner from Covid. The shares are already up 186% since the end of February this year.