The Trader: Optimising Your RNS Feed

In this article, I’ll show you how to clean up and manage your RNS feed by adding a filter and removing noise, colour coding your RNSs, and highlighting words and phrases within the stories itself. We’ll also get rid of all stocks without EPIC codes.

The RNS feed is an important part of the screen for traders because those who can react fast can beat others in the race to be first. I’ve made great trades by being the first buyer in the market reacting to an RNS both on SETS and SETSqx – and spotting RNS announcements that have otherwise gone unnoticed and ignored by the market.

The RNS feed is the London Stock Exchange’s official conveyor belt of information and we don’t want to miss anything important. Remember, many other traders and investors, as well as market makers, brokers, and fund managers, will all be using this same feed. Many of them will be using ShareScope too. Any edge we can give ourselves will be beneficial for ourselves.

One of the recent updates in ShareScope has been my suggestion to improve the RNS feed and allow for greater custom optimisation. Given the amount of noise and news in the market, it’s important that we see the market with as much clarity as possible. Therefore, the improvements in filtering that I have suggested will allow you to take greater control of your own ShareScope and lead to better results.

First of all, let’s clean this up. Almost none of these RNS announcements mean anything to me.

Do we care about the net asset value of the Lyxor Dow Jones Industrial Average UCITS ETF? My guess is probably not – and if you do hold this instrument in your portfolio, you’re likely invested for the long term and so don’t need this noise.

Let’s get rid of it. To do this, we right click with our cursor over the news, and scroll down to “Set news filter…”. Click this, and click “Add new filter”, and you will see this screen. 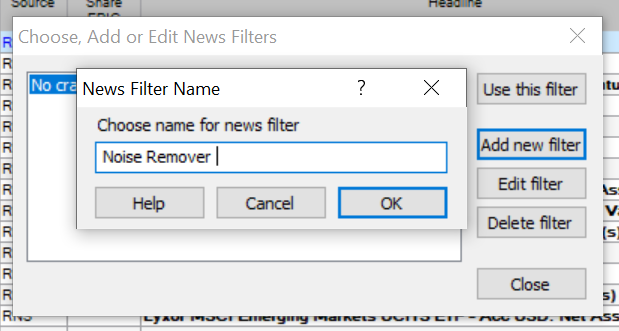 Choose a name for this filter. When you’re done, click OK, and you’ll then see this. 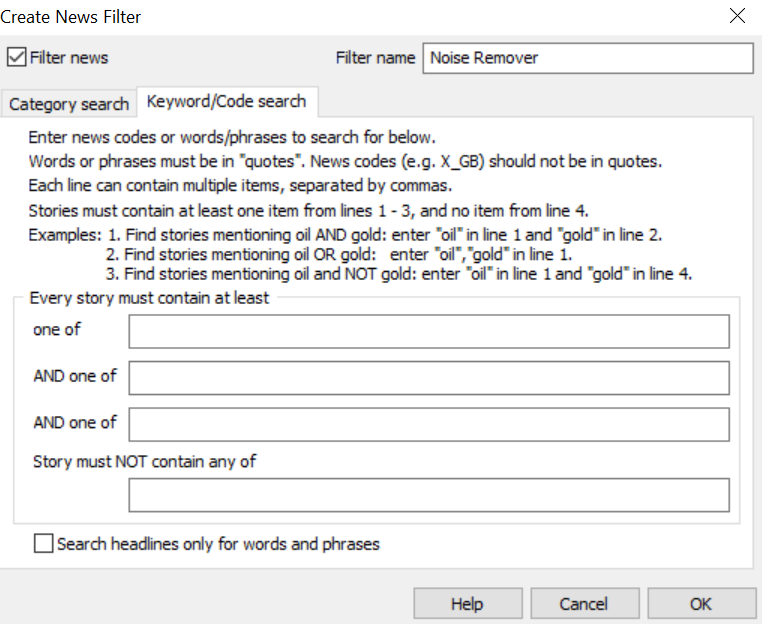 Now, we can go to town getting rid of all the noise that we don’t want or need to see. 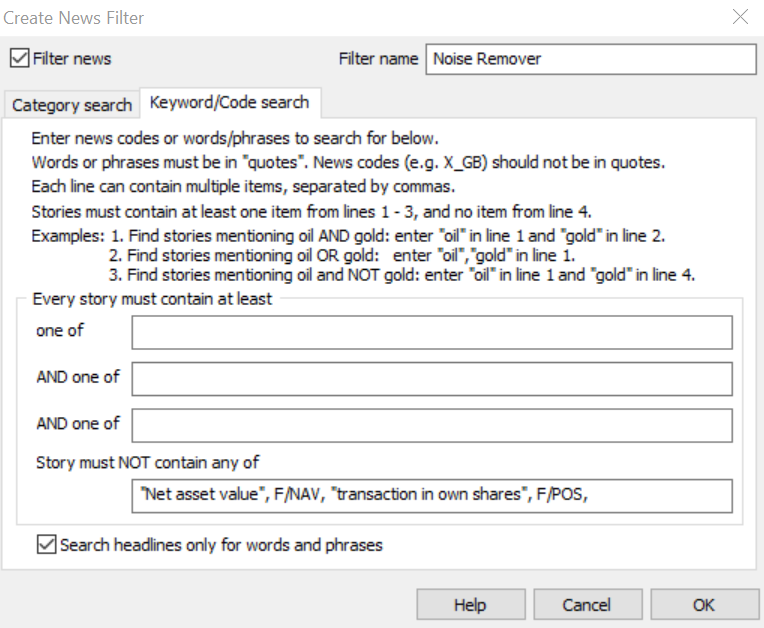 It’s important that we click the bottom box too – “Search headlines only for words and phrases”. If we don’t click this, then the filter will remove all RNS announcements with any of these phrases inside the RNS. These may be casual mentions in results or another RNS where the main headline isn’t about net asset value or transaction in own shares.

You’ll see that I’ve added the code of net asset value as well as the phrase, and I’ve done the same with transaction in own shares. One can never be too careful.

To give you an idea of some other words and phrases I’ve muted:

Have a look at the RNS feed for yourself and decide to take out what you want. If you find Holdings RNSs boring and useless – then it’s simple. Get rid of them and filter them out.

Once we’ve taken out the trash, it’s now time to get our highlighter pens out and start scribbling.

By right clicking with our cursor again over the RNS feed, we need to scroll down and click “News options…”.

Doing this will then bring up this window. 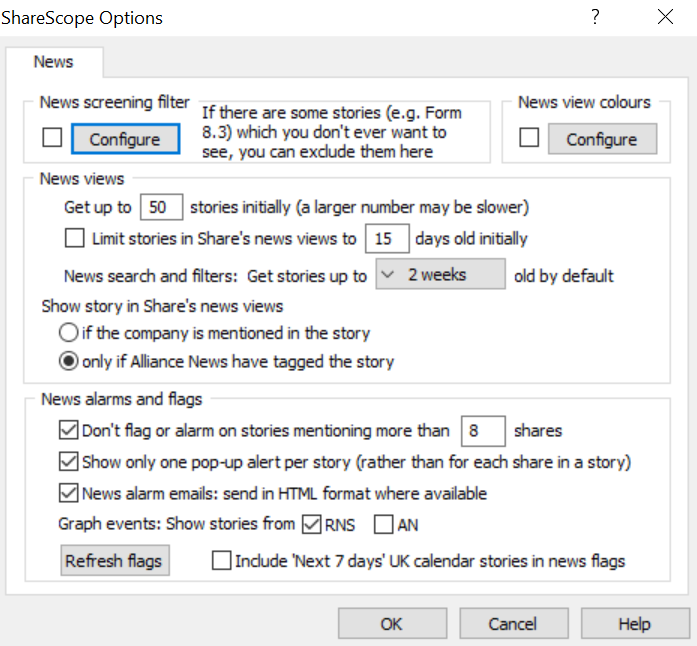 We need to click the tick box on “News view colours” and then hit “Configure”. 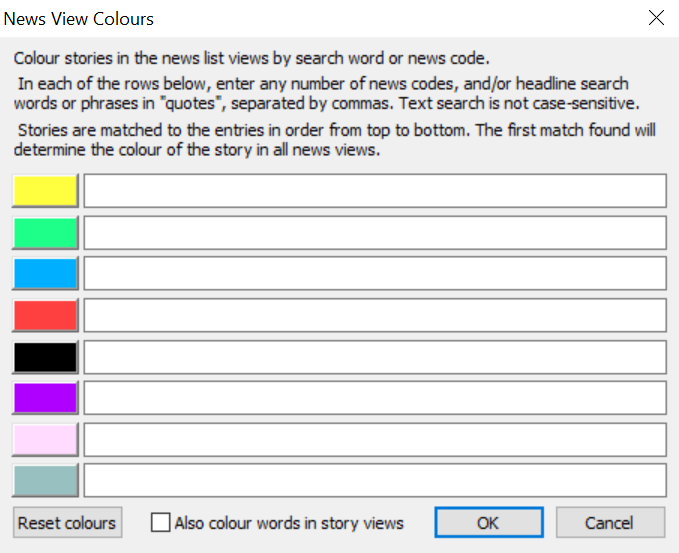 We now have a total of eight different colours to play around with and code.

For yellow, I am going to have Holdings RNSs. I don’t want to delete these from my screen, because when the feed starts running at 07:00 there may be an interesting new shareholder pop up in a stock that I know about, that I otherwise might’ve missed. Holdings RNSs are only really of use to me if it’s a stock I hold already.

To colour code these RNSs, I’ve entered “Holdings” – with ShareScope providing me with the relevant code. Make sure “Also colour words in story views” is unticked – we want to code only the headlines at this stage.

If we click OK, and go back to our RNS feed, we can see that the holdings RNS from IQE has been correctly coded.

We can then go back and code more. 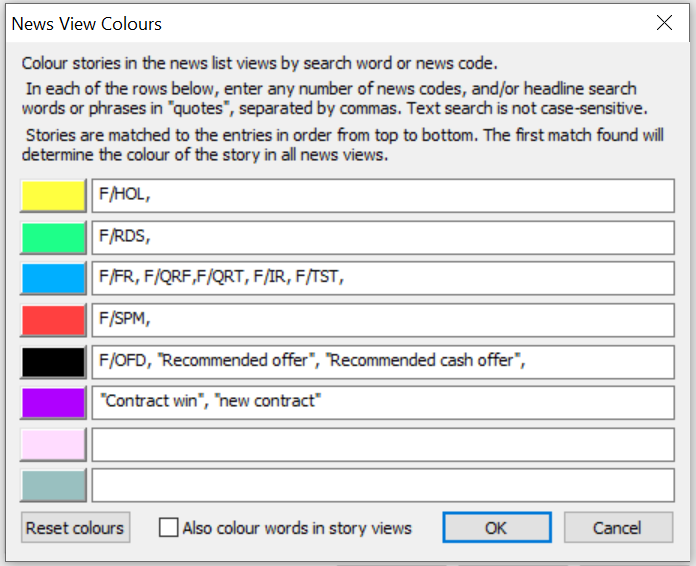 When you enter an RNS headline, very often the code will automatically come up.

For example, when I searched “Holdings” – immediately the code for a holdings RNS (F/HOL) came up. A quick list of what I have coded:

Feel free to play around this however you want and what is important to you.

If you want to stop the placings announced each morning – you can now code for that too. Directorate changes can also be coded.

As well as coding RNS headlines, there are now far more options to code RNS content which now make this a viable tool for traders. 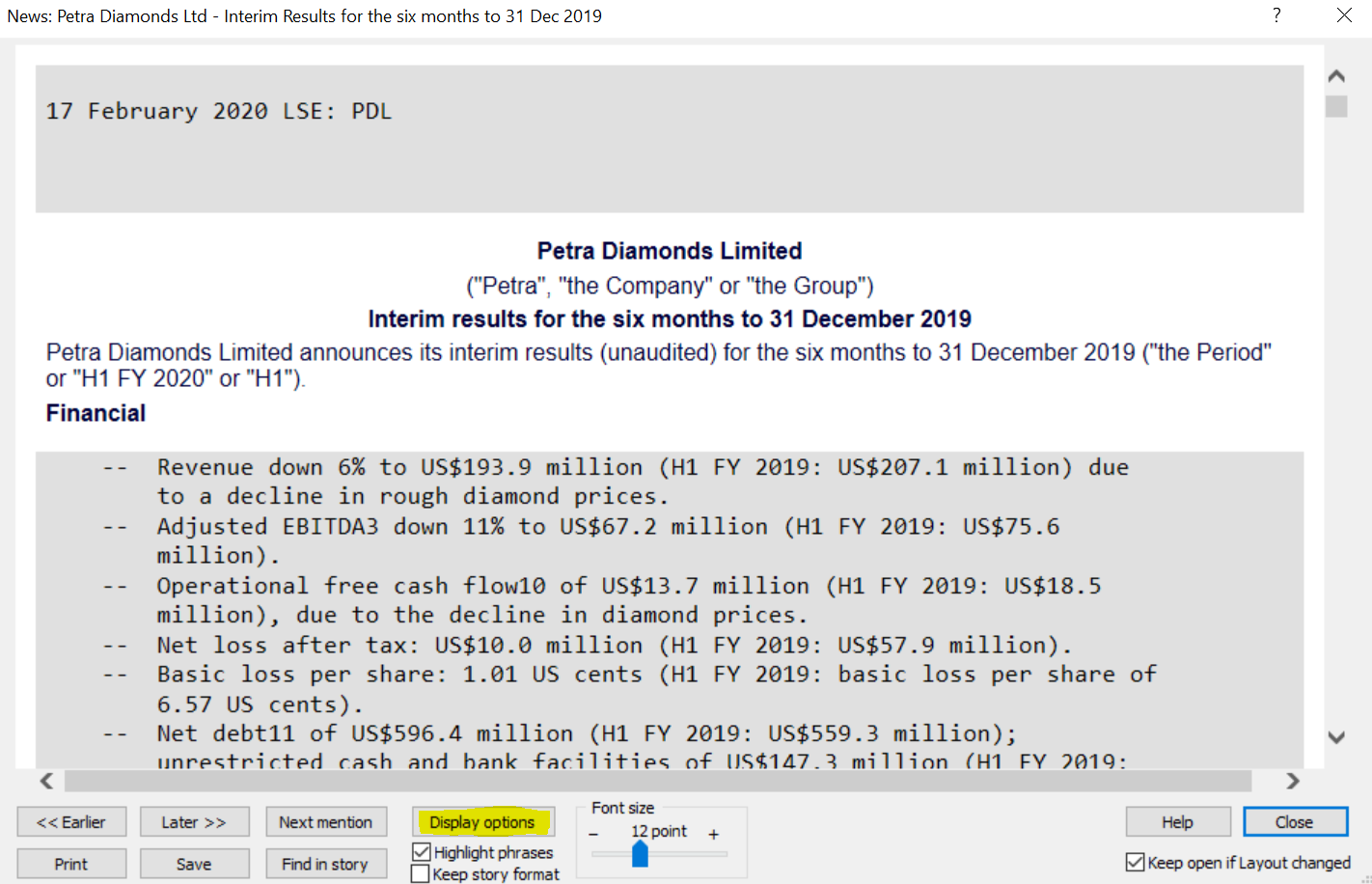 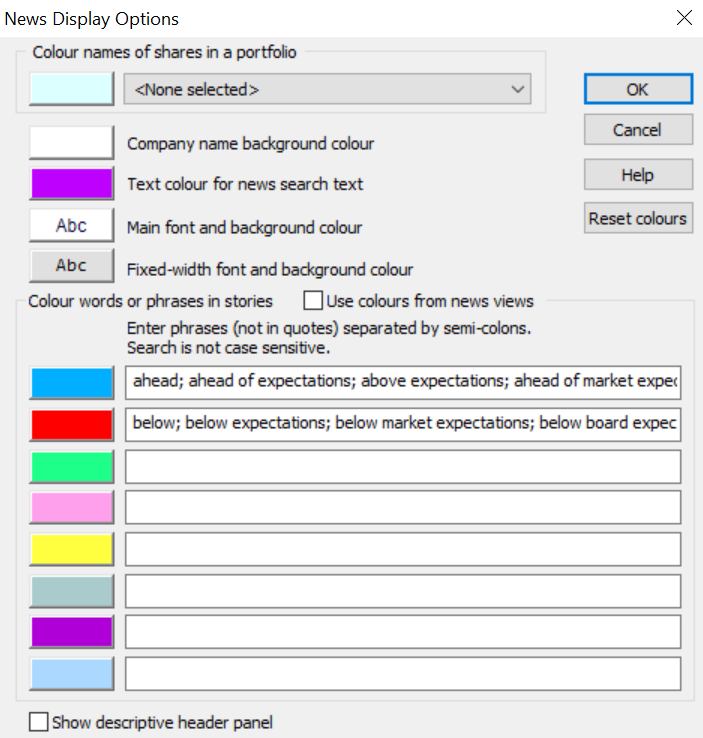 This option now allows us to code for more words.

(You may be wondering why I haven’t used a traffic light system of red, amber, and green – the answer is because I have a red and green colour blindness deficiency. I would never have known this had I not been given a test in primary school. The woman with the book of colour blindness diagrams told me that it was nothing to worry about as long as I didn’t want to be a firefighter or a fighter pilot – adding “but you didn’t want to be one of those anyway, did you?”

“No”, I responded, whilst holding back the tears inside as my dreams of flying a Grumman F-14 Tomcat were shattered.

And so I became a share trader instead. Which isn’t too bad. But anyway – if you want to code in a traffic light system – then of course do that. Whatever works for you.)

Between the time of the RNS feed rolling and the opening auctions we have just 50 minutes, and 1 hour for SETSqx stocks, so speed is key. Being able to quickly understand the gist of an RNS, and being able to make a decision on an RNS at an increased pace, will help in the morning race to find trading opportunities.

Clearing out RNSs from the feed

Finally, we want to optimise the actual RNS feed before it even goes through our filter.

We can do this by creating a new window with a list using “LSE shares”.

We then right click and go on to “Change list” and scroll down to “Custom lists” and “Create/edit lists”.

We should then see this window. Make sure “Choose fixed list” is set to LSE shares. 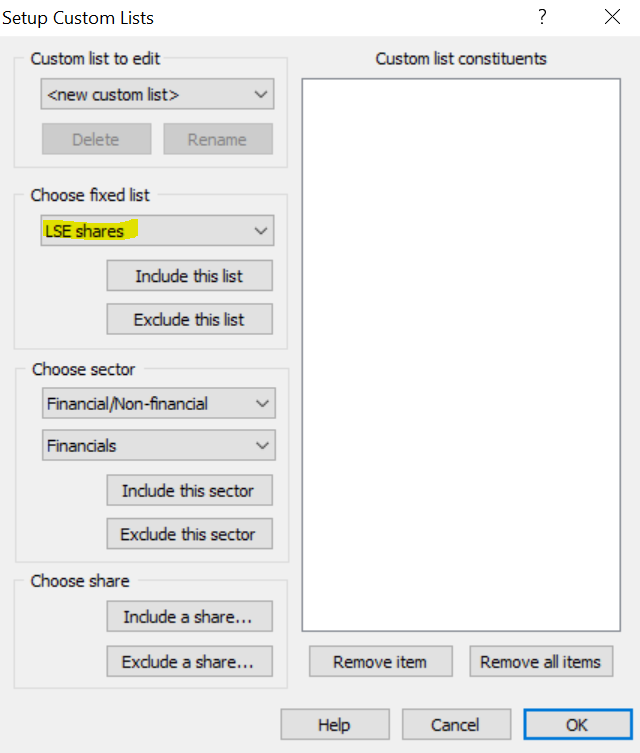 This then gives window. 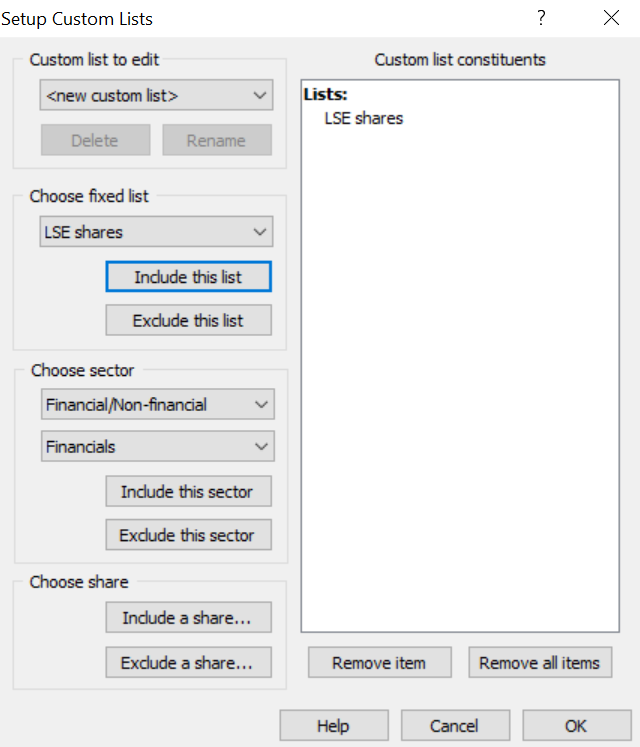 We now have LSE shares on our custom list, and we want to exclude LSE international shares.

Simply head to “UK/LSE lists on the dropdown box and choose “LSE International (IOB)” and then press “Exclude this list”.

Do the exact same for LSE European, and we should now see this window. 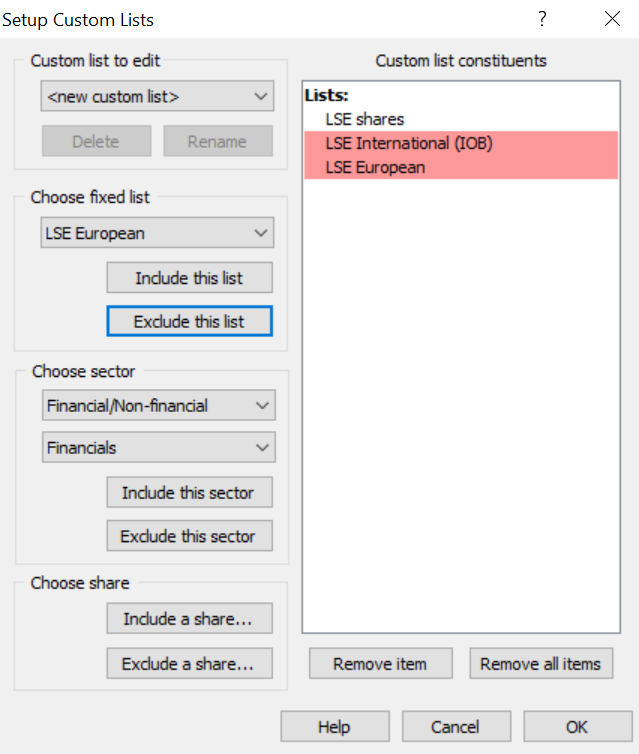 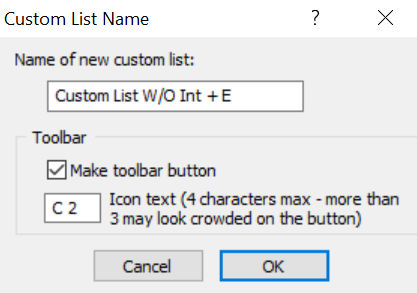 Once we’ve done this – click OK when you’ve excluded the two lists. The list is now set up.

What we need to do now is link this to the RNS feed and this will strip out International and European shares that we don’t want to see.

Once this is complete, we have now completed the task of optimising our news feed. Don’t forget to back up your ShareScope so that your work isn’t wasted.

To conclude, let’s take a step back and see what we’ve done

Having the extra versatility to colour code RNSs how you want them is in the latest edition of ShareScope.

If you have any questions, reach out to ShareScope support who will be on hand to help should you get stuck, or join my Facebook group.

I will be working with ShareScope to improve the product for traders and we are already discussing other new features which I hope we can release soon.

You can download Michael’s free books on the UK stock market at www.shiftingshares.com