There were no spare seats when I arrived at Panmure Gordon’s offices last week for the Non-Standard Finance investor day titled “Culture driven Performance”. The presentation was riddled with keywords such as “Integrity”, “Clarity”, “Respect”, “Trust”, “Empathy” etc. I particularly liked John Van Kuffeler’s description of the loan correspondence he has from 1649 where he described how nothing had changed in 370 years. Understanding customers was what lending was all about then and today it is a key regulatory principle today. This type of presentation wouldn’t have happened 10 years ago.

The same week Slater sent a letter to the companies it has shareholdings in regarding remuneration. It noted Carillion’s 17-page remuneration report calling for shorter reports to enhance transparency. It criticised the widely used incentive of nil priced options and described adjusted EPS as a debased coinage. “Is a good salary not enough to get directors out of bed in the morning and to diligently work their hours” it said. Slater will vote against remuneration reports that are longer than two pages.

Banking is a game of risk and nowhere is culture more important than in the traditional world of lending. HSBC’s remuneration report runs to 34 pages, Lloyds Bank 23 pages and RBS 20 pages. In HSBC’s annual report the word culture appears 39 times while the word remuneration appears 324 times.

Natural selection operates in economies and when culture is lacking markets find ways of filling a void. This is happening in the banking world and we term it disruption. Internet Killed the Banking Stars was the title of one of the last research notes that Terry Smith wrote as a banking analyst in the 2000 tech bubble. Now we call it Fintech. First, we had challenger banks and now we have digital banks with high valuations that I have found it easy to dismiss as overvalued unicorns in the past. But there may be something in it as I found when studying the world of payment processing.

On 14th October last year (here: https://knowledge.sharescope.co.uk/2019/10/14/weekly-commentary-14-10-19-forex/) I found myself getting excited about the three small cap forex companies Alpha FX, Argentex and Equals Group. All three have started in forex trading but are evolving into bank like business models at different rates. The attraction of the model is that customers become tied in and provide repeat business and thus new customers merely add to the growth rate. This is far superior to a more traditional trading business where each year new business must be won to make the numbers. A private online payments business I met last week told me they were integrating their technology with a website hosting bookings for 4,500 hotels. It is a large project, but the CEO confided that “they will never be able to move away from us”. Payments, where the payment processor takes a small clip from each payment has a similar feature on repeat revenues that compound over time on the back of the two drivers of underlying growth of the customer as well as new clients.

Contemplating how to invest in this attractive business model it seemed strange that the three UK quoted payments companies, Worldpay, Paysafe and Earthport have all been taken over in recent years. Paysafe was taken private by the private equity giants Blackstone and CVC, while Worldpay was acquired by a US payments company and Earthport was acquired by Visa. It would seem that these investors see value that stock market investors weren’t seeing which can cause an investors nose to twitch.

Why is it such an attractive market?

The business of transaction processing is essentially a technology function where electronic payments are transmitted between banks taking a small clip from the transaction (typically a few pennies). The payments market is large, growing, and global. China is the largest market at US$ 1.57 trillion with the US behind that at US$ 961 bn and the UK is US$ 162bn according to Statista. Most estimates suggest the market is growing at 7-8% annually. However, as we move to the online world the nature of payments is changing. Mobile phone payments are growing at c 40%, cross border payments are growing at c 20% and Asia is also growing fast as ecommerce is increasing.

The providers of payment gateways are essentially technology companies on a land grab to integrate as wider network as possible as the benefits of scale are huge. The largest 3 payment processors in Europe are Sberbank, Barclays and Worldpay, while in the US the market is more dominated by the technology companies (Worldpay and First Data). This is an area where the battle of fintech vs banks is clearly evident. And I think we can guess who is going to win. For that reason, M&A activity is extreme. A sample of the bid activity can be seen in this list: 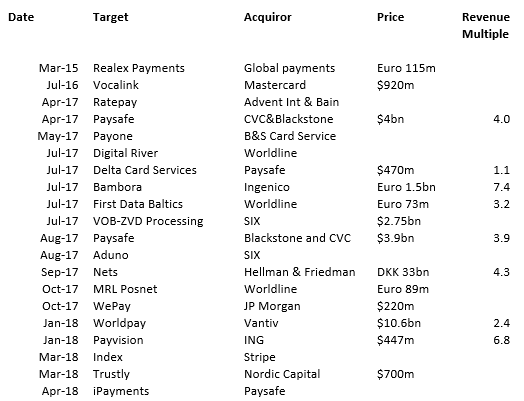 It is noticeable there are few banks involved and also that prices, where disclosed are high. 7X revenue is a frequent takeover multiple. Earthport was trading at 5p in May last year when Visa bid 30p for it and as there were competing bidders Visa was forced to increase their bid to 33p/share.

How can investors participate?

It is noticeable that most of these stocks trade at prices above the 7X turnover multiple that acquisitions have occurred at in the M&A market making them very expensive. American Express and Discover Financial Services are banks and so don’t qualify on the EV/turnover screen on SharePad.

My concern here is investing in overseas quoted stocks increases risks and loan book risk is one where overseas investors are poorly placed to understand so I am keen to find the simplest model. Mastercard and Visa are both hugely expensive at 21.6X and 20.1X revenue respectively. Adyen interests me because they trade at 13X turnover but that is a lofty 114.7X PE which indicates a lower operating margin than the peers. This could be because they are investing in technology to ensure they gain a technology lead. Ingenico trades at 3X turnover which is a PE of 20X so looks more conservatively valued while also being smaller than many of its peers. It could be a takeover target for the more highly valued global players. 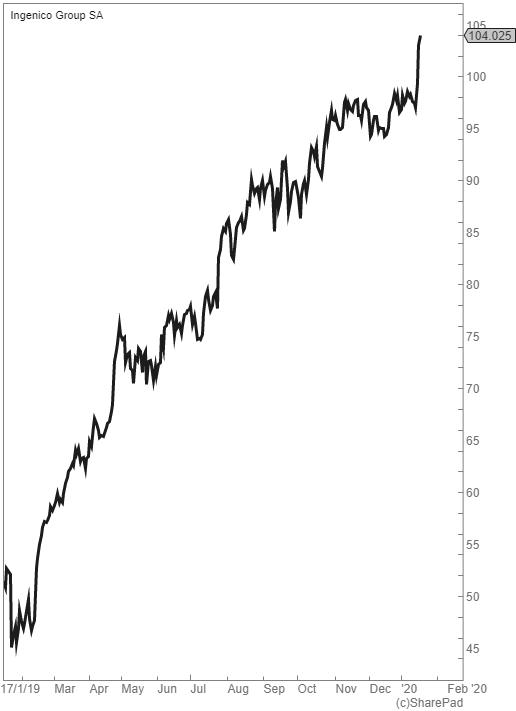 The chart above seems to be saying I may be late to the party. In 2017 Ingenico acquired Bambora at 7.4X revenue while it trades at 3X revenue today suggesting it may not be too late however. A look at the presentation of Q3 results guides to 9% organic growth which appears a little disappointing given the rating. Free cash flow conversion is a lowly 50% because of the capex requirements while net debt is Euro1,518m. I am not clear that the risk reward is attractive here and so I am starting to understand why it is cheap. 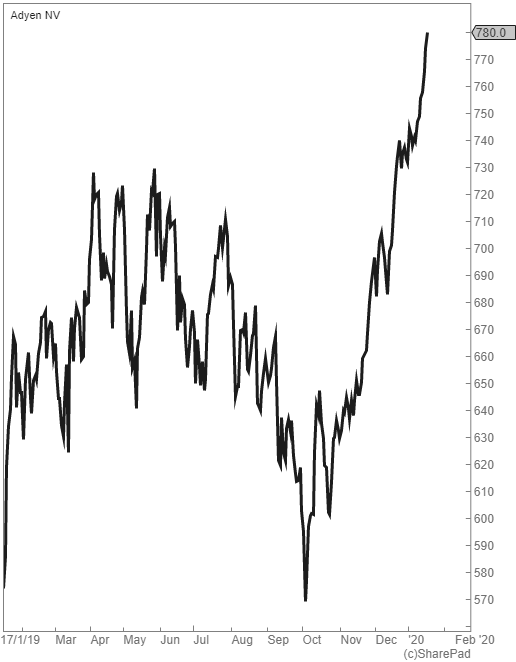 While Adyen make a lowly 10% operating margin the financial guidance they provide says they expect this to increase to above 55% in the “long term”. Revenue growth guidance is in the region of “mid twenty percent to low thirties percent” which is exciting. Capex guidance is expected to be 5% of revenues which would suggest free cash flow conversion of 50% when margins are low but 90% if margins are 50%. It would appear the company is on an exciting journey to be a cash generative machine.

The company IPO’d in June 2018 in Amsterdam at Euro 240/share having been founded in 2006 by a group of payments professionals who had sold their previous business, Bibit to Royal Bank of Scotland in 2004. The business has grown by focussing on global enterprise level merchants who at IPO still formed the majority of the revenues. In 2012 a Point of Sale solution started to be rolled out where brands such as luxury retailers saw a previous patchwork of providers spread across 15 platforms consolidate to a single unified commerce platform. This would seem to be a good position to occupy in an increasingly global commercial world.

This is an expensive stock and so we need to be sure the culture is positive as it will take time for the profits to catch up with the valuation. This is a subjective area, but I find the following useful ways of testing the culture:

It appears we are looking at a high growth, high culture, sustainable business of a high rating. For highly rated growth businesses I find it is useful to consider how many years ahead the valuation is currently discounting instead of considering today’s high rating.

Forecasts are assuming 40-48% PBT growth continuing over the next two years. The company has a December year end. Consequently, the EPS is expected to double from Dec 2019 to December 2022.

Even on 2021 earnings the PE is 58X. With net cash of Euro 1.5bn the EV/revenue is 23X. At continued growth rates the PE rating would come down to below 20 another 3 years beyond this horizon. If the EV/Revenue fell below 7X it seems likely that predators would acquire the company so perhaps the rating would be underpinned here, but at the 37% growth rate it would take be 2025 before this would be reached. So, it would appear that the valuation is discounting earnings growth until 2024/2025.

I like almost everything about Adyen with the exception of their customer service reviews and the rating which seems to be discounting 5 years of forward growth. The reality is that in 5 years’ time the company would most likely still be very highly rated and it is conceivable I could have doubled my money. For a highly rated growth stock therefore if I had a 5-year time horizon I would own this. For more agile traders they could well do better waiting for a better chance.

It is rare to find attractive business models in growth industries. The payments space is one such industry. In this environment stock markets often award high valuations to all participants as the rising tide lifts all the boats, so investors need to be wary. Ingenico could be an example where the risk/reward seems out of kilter. Usually I have found that to own the best business in a quality industry is the safest strategy which may well be the Amsterdam quoted Adyen. However, to justify the high valuation it may be necessary for investors to take a 5-year view. Sometimes we need to force ourselves to take a long-term view, which is emotionally uncomfortable. It does, however, reassure me that perhaps Alpha FX isn’t as expensive as I had feared. (see 14 October 2019 note)

Results season starts this week. In this growth market it may be reasonable to assume that most will be good.