Is there life on the High Street?

With Debenhams going bang, the demise of Mothercare, and Carpetright finally succumbing to their challenges (Carpetright was taken over – but at a price only slightly higher than the all time low), the narrative of the high street being dead seems to be coming true with every new departure.

Thomas Cook went bust a few months ago, and whilst not a retailer, had a powerful presence on the high street. It’s easy to say that the sector is a blanket short and to avoid anything on the high street, but are we missing out on any diamonds in the rough?

One of the benefits of SharePad is that it allows me to add a column in order to search for specific sectors (Add column > Company > Sector). I can now flick through the sector with my charts already pre-set.

The vast majority of charts are, as can probably be guessed, downtrending. However, there are some interesting ones.

I had first hand experience of this retailer as I hired a black tie event for the Investors Chronicle and Financial Times Investment and Wealth Management Awards, where ShareScope was shortlisted for “Best investment data platform”. ShareScope won! It was a great event, and I paid less than £110 to be measured and hire the lot – dinner suit, shoes, shirt, etc.

On taking away the gear, the salesman mentioned that nobody would be able to measure me up and create a custom-made suit just for me any cheaper than them. I did think that this may be a reason why their share price has been struggling in recent years, but politely thanked him and left. 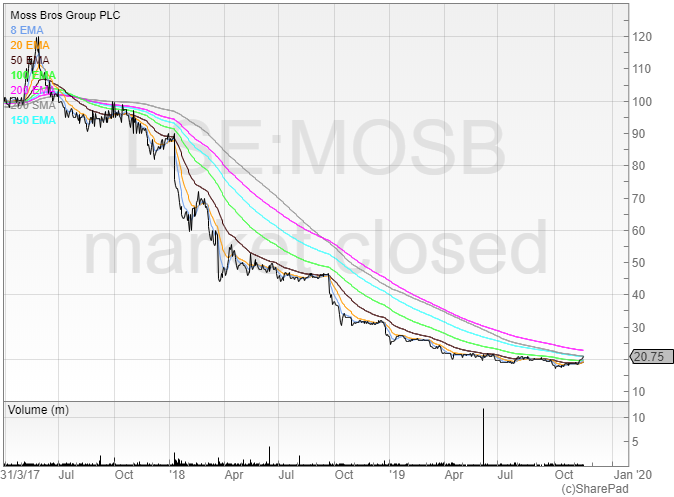 Since reaching a high of 120p in 2017, the share price is now down on its knees at around 21p. There was a large volume spike at the start of June, which I assume is an off-market block transfer between a larger seller and buyer. 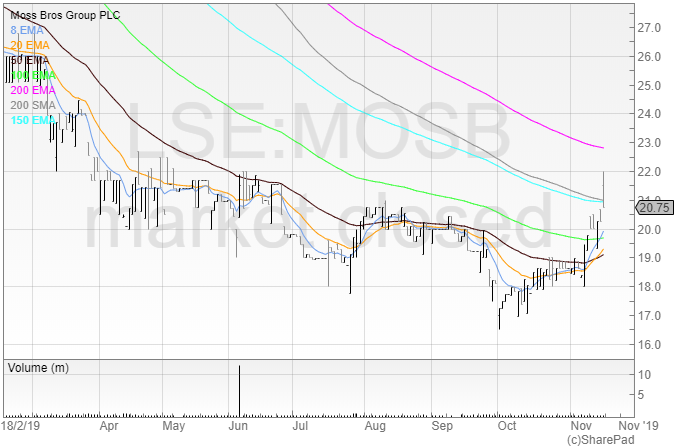 If we look a little closer, we can see that the price has been rallying in recent weeks. The company released its Half-year Report on the 24th of September.

Of course, the ‘Financial headlines’ are all great, because that’s what they want us to see and focus on. The company made a £2.6 million loss, but the company has a good track record of producing operating cash flow. That means little if the company is spending all of that on investing in the business or financing, but it isn’t. There was a net increase of £7.3 million in cash bringing total cash to £18.2 million, and net assets to £26.4 million. This is against the current market cap of £20.9 million. 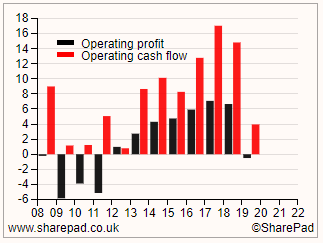 It’s not a company I would rush to invest in, but it also doesn’t appear to be going bust any time soon. The company already has the lease liabilities on its balance sheet (IFRS 16 has meant that retailers now have to recognise leases as costs and not assets), and though the argument goes that some leases are highly competitive and prized and are hugely profitable, in my opinion leases are still costs. The idea that they could be anything else is absurd, and IFRS 16 is only doing what should’ve been done a long time ago.

As a trader I am interested in mainly the price action, but it’s interesting to see that this is clearly a cash generative business that is priced below book value. If the smart money starts to buy and the price starts to pick up above the 200 moving averages, then that would tell me there may be a swing trade. It’s on the watchlist.

It’s not all doom and gloom on the high street though. Where others have got it badly wrong, Greggs has got it so fantastically right. 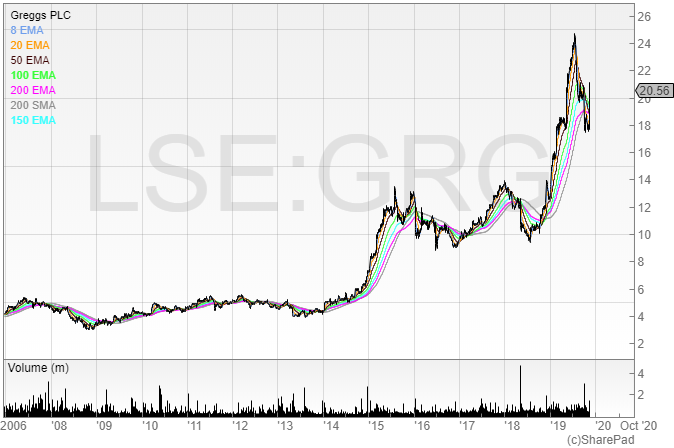 Greggs took a while to recover from the 2008 Financial Crisis, but really started to motor in 2014. If I’d invested as much as I’d spent in Greggs and Wetherspoons during my university years I’d be pretty happy – it just goes to show that good investment ideas can be gained from every day life.

From mid-2015 to late 2018 the stock consolidated, but the price has been on a clip since then. 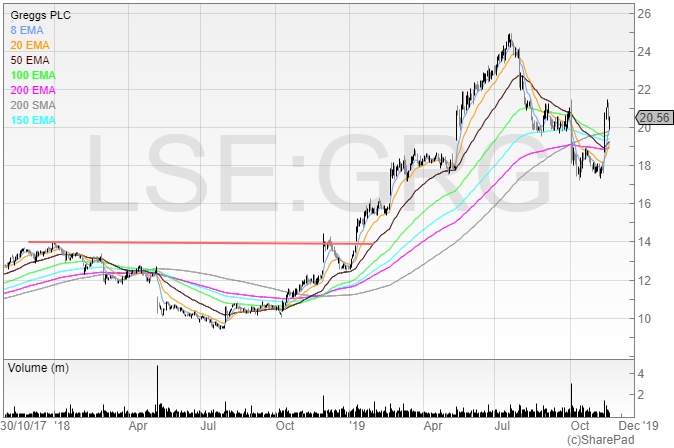 It’s trading at almost 30x earnings, which is not cheap – but quality never is in this market. We’re seeing an unprecedented period of low interest returns. People are trying to call the top of the market but for as long as rates remain low and there is little to no (or even negative) returns elsewhere, then where else is money going to go?

One pattern I like to trade is the ‘ahead’ statement. Post Earnings Announcement Drift is a well-known stock market phenomenon, and generally when a stock beats expectations one can expect there to be a drift up in that stock price.

We can see in April this year (on the left of the chart) that this is exactly what happened. It since retraced, but good risk management would see a trader bank their profits and move on. I was long on this announcement, and averaged up as the stock kept rising. 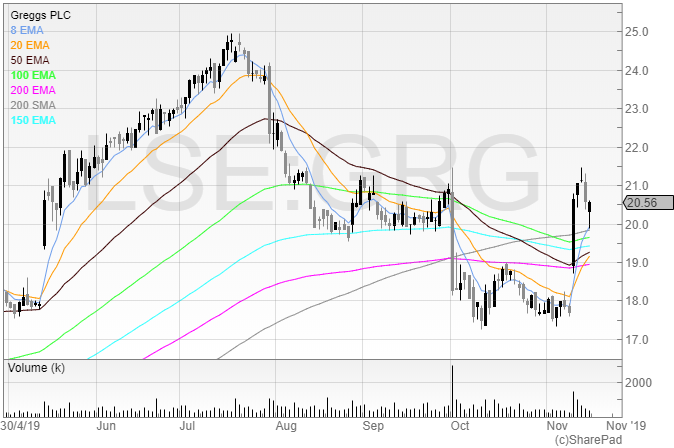 Now, the stock is offering another potential opportunity. I was long again on the stock on the trading update, and still hold my position despite the shooting star after the third day following the announcement. The chart has now put in a bullish hammer, and I think the stock will provide another opportunity to go long should it break the 2150p resistance level. We covered candlesticks in a previous article – and the shooting star would’ve been a signal for those who wanted to scalp the upside move. I’m playing for a bigger move, and happy to give the stock some breathing room.

With company-managed shop like-for-likes up 8.3% in the six weeks up to 9 November 2019, the business is doing something right. No doubt many people are wondering if it’s too late to buy Greggs, and it does take some faith to buy such a richly rated business and after the price has already rocketed, but WH Smith has done a fantastic job of transitioning itself from high street dependency to travel units.

The business runs smaller version of its stores, with essentials, in railway stations, and airports, where prices are typically higher. Could Greggs not become a similar competitor, despite not selling books? The vast majority of sales in travel units are food and drink – not books – and food and drink is something Greggs does very well.

With everyone avoiding the high street because of the narrative of it being ‘dead’, there are clearly opportunities to make money from it if one bothers to look.

Michael Taylor currently holds a long position (a trade and not an investment) in Greggs plc. None of the stocks mentioned in this article are tips or recommendations; please do your own research.