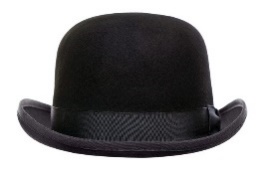 Structural Change in the City

It always amazes me how debt can lead to innovation. Humans find ingenious solutions. The Bank of England was founded in 1694 because the 9-year war against France was expensive. Usefully that enabled us to continue to increase the debt which brought about the South Sea Bubble and subsequent crash in 1720. After World War 1 the war debt gave rise to an innovative expansion plan which led to the roaring 20’s and the 1929 crash.

The financial crisis of 2008 led to an innovative new concept called quantitative easing. Since then our stock market is now up 110% from its 2009 lows, the Trainline IPO at £1.7bn market cap confirms that ticket machines are worth more than trains and Beyond Meat, the loss-making producer of expensive plant burgers has a market capitalisation above $10bn. What happens next isn’t the most joyful prospect.

Yet over time markets go up and we need to invest. So where to invest is important. As each market cycle changes so do the sectors. I recall the fund manager of Throgmorton Trust telling me in 2000 that he was selling his technology shares and investing in mining stocks which at the time was such a sharp turnaround of positioning I struggled to comprehend it. It proved to be the right call as commodity prices increased as technology shares crashed.

This time feels like one of those moments in history when structural changes in our economy means it is important that our investments are positioned in the right industry. We are in a time of technology enabling businesses to access huge markets globally creating Unicorn companies. Facebook is launching its own cryptocurrency. With these enabling technologies is coming the need for more legislation and regulation to ensure consumers are protected. In short, the result is that businesses are succeeding faster than ever before, and industries are changing more rapidly than before. The winners take it all while the losers become zombie companies rather than going bust by virtue of low interest rates. Investors naturally want to be on the side of the winners and avoid the zombies.

Nowhere is this structural change more apparent than in our own financial services industry. Regulation is increasing resulting in higher costs for small companies and favouring the creation of scale players. At the same time technology is reducing costs and enabling access to stock markets for large and wide audiences, as ShareScope readers of this will be aware. The increasing benefits of scale are enabling cost reductions to the end consumer. The price of share dealing has come down, the cosy city establishment is being rumbled as pressure mounts on fund manager fees and the old tradition of paying what is called “trail commission” – a pay back from the fund manager to the distributor has been outlawed. This is what has built Hargreaves Lansdown into the £8.8bn company it is today.

Hargreaves Lansdown, as one of the winners of these macro enabled events has recently been criticised for supporting Woodford. Its shares have fallen 24% in the last month as it has suffered criticism for not limiting its exposure and potentially not therefore having proper risk controls in place. Has it become complacent is a valid question?

Below is a chart of quoted participants in the fund supply chain ranked by their share price performance over the last 12 months. AJ Bell has been an outstanding performer from its IPO in December but as that isn’t a full 12-month period we could argue it’s not a fair comparator. 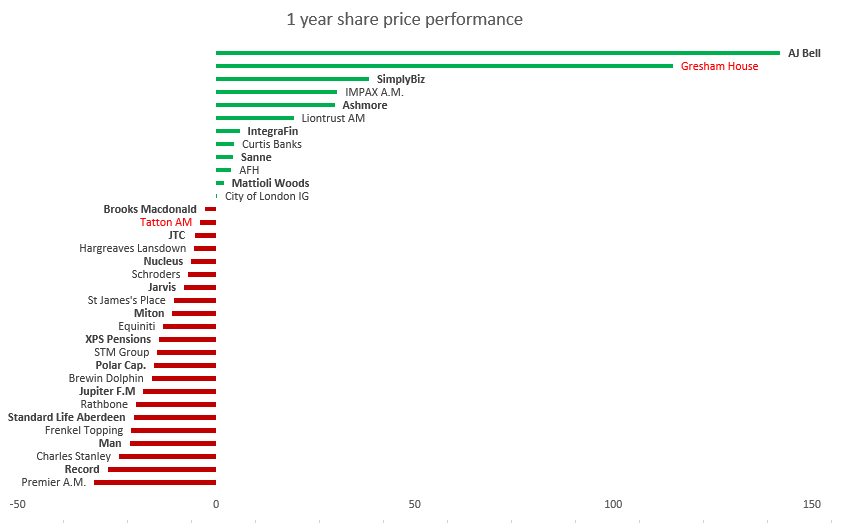 Four of the “artisan” fund managers show a strong positive performance in Gresham House, Impax, Ashmore, and Liontrust while the fund manager most stuck in the middle, Jupiter is a laggard. We can also see several of the old model traditional wealth managers such as Brewin Dolphin and Rathbone are laggards.

In this new world of “artisan or scale” the only wrong place to be is in the middle. Good businesses run the risk of just carrying on doing what they do and becoming complacent which arguably may apply to Hargreaves Lansdown. Now they have international competition they may need to change. One company that is building scale in discretionary fund management is Tatton Asset Management. While Gresham House has built a collection of very artisan style fund management business over recent years. A brief summary of the two companies is below: 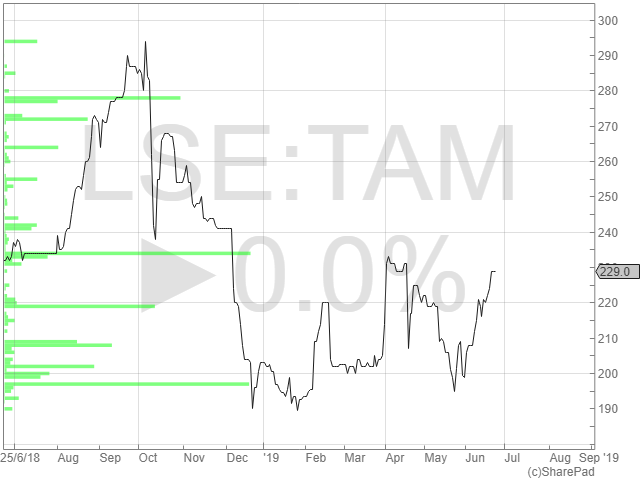 Founded in 2007 by Paul Hogarth. He previously founded Bankhall in the early 90’s and sold it to Lynx Group in 2001. The business was subsequently sold to Skandia in 2002. Paul became a main board director of Skandia until leaving in 2006 to set up Tatton Asset Management. Initially the group focussed on supporting advisers through the Paradigm Partners compliance services business and in 2007 extended the services to mortgage aggregation. Discretionary fund management services were added in 2013 and in July 2017 the company came to the AIM market at 156p/share raising £8.1m net for the company and £40m for selling shareholders with 59.2% of the company being placed out to investors.

The business model has three divisions

AUM (Assets Under Management) in the Discretionary Fund Management business is £6.1bn while the company makes a 53% operating margin. This is a platform style business in the same way that Hargreaves Lansdown, AJ Bell, Integrafin and Nucleus are platform businesses.

The company earns a healthy ROCE of 47.8% while having £12.2m cash on the balance sheet. This is a sign of the company owning a competitive advantage which in the investment management business appears to be around the lowest pricing in the space, alongside respectable performance and a broad product range. The lowest pricing will prevent smaller competition coming into the market as they can reduce the pricing as they gain scale. It is a market where the winner takes all.

The shares are not a value play trading on a current year PE ratio of 17.4X but the yield of 3.7% is helpful if it takes time for the growth to outpace the valuation.

The company has recently announced a partnership with Tenet which has the effect of growing the number of advisers the company supplies product to by 293 appointed representative firms on top of the 445 existing. It would be logical to see growth accelerate accordingly which is not what the brokers are forecasting so we can hope for some earnings upgrades. This could be one of tomorrows large companies with positive earnings surprises during 2019.

The two threats that could upset this happy outcome would be the market threat and the Vanguard threat. As the investment management fee is a % of assets when markets decline so to Tatton’s revenues. The more significant threat would be if Vanguard turned its sights on discretionary fund management. Right now, Vanguard are focussed on supplying funds wholesale over platforms. To distribute though independent financial advisers requires a lot of time and effort so I suspect this is unlikely to be their focus, but it is possible. 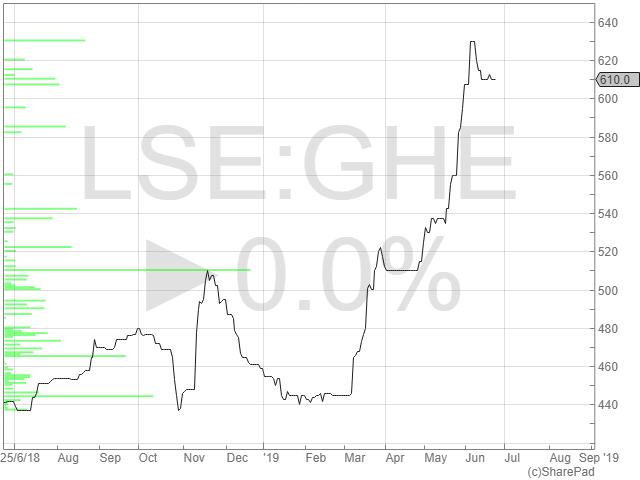 New management joined in December 2014 and set about building a specialist asset management business under the leadership of Tony Dalwood. In transforming this business from an investment trust to an AIM listed specialist alternatives fund manager the company has made 4 acquisitions at the same time as launching new funds such as the Strategic Public Equity Fund Gresham House Forestry LP, British Strategic Investment Fund and Gresham House Energy Storage Fund plc as well as selling off the legacy property. The journey is illustrated below. 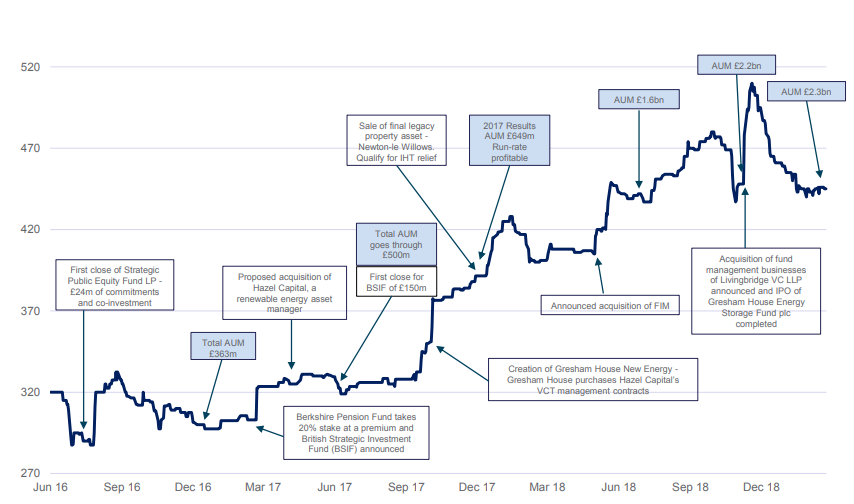 The model is one of growing into specialist sectors of fund management where management fees are more resilient, and profitability is better. At the end of 2018 the company managed £2.3bn of AUM spread across Forestry, Housing & Infrastructure, New Energy, Private companies (VCT’s etc) as well as specialist public equity funds. Fee rates on these highly specialist funds vary from 0.9% to 2.5% per year which is higher than a typical equity fund of 0.75% due to their specialist nature. Around half the funds also carry performance fees which has the potential to produce some high operating margins. I note that the analysts don’t forecast any performance fees.

Most of the assets are illiquid by their nature and consequently are held in closed ended funds which are locked in for up to 25 years negating the risk that has caused Woodford grief. This provides a very high level of fee visibility alongside high margin potential.

The strategy of the company is to grow the AUM from £2.3bn to £4bn over the “medium term” and I suspect we could debate the meaning of “medium term” for some while.

Forecasts assume £9m of operating profit in the year to December 2019 which would be a 9.1% ROE. This low ROE is a result of having made 4 acquisitions since 2015 and most of the assets are goodwill and intangibles on the balance sheet. My suspicion is that at this early stage of development the forecasts are kept low. I note that the broker forecasts assume flat assets under management over the course of 2019 which one could argue is extremely cautious

The shares are now highly valued having appreciated 35% since the March results. They now trade on a 2019 PE ratio of 21X and yield only 0.8% while having net cash on the balance sheet.

This is a highly specialist artisan business with the potential to be highly profitable. The funds are very secure but the flip side is they are also harder to grow. The valuation is expensive, but this has the potential to produce significantly more profitability than is currently being forecast. It is positioned in the right place. Expensive financial stocks can become very expensive. See AJ Bell for details.

Revenues are market sensitive although markets such as forestry are less volatile than equity markets. Regulation could always be a threat, particularly where they are involved with private company asset management if there is an inquiry post Woodford’s private company involvement. Competitive threats are lower down the risk list due to the locked in nature of the funds.

The City that I have known and loved is being disintermediated on the back of technology and regulation. The need to be a scale player or an artisan has now become very urgent. Lessons can be learned from the food and beverages world. Those that get left in the middle will fail. Tatton Asset Management and Gresham House both look well placed at opposite ends of the spectrum. While Hargreaves Lansdown is entering a new competitive threat as the larger end of the market becomes global. On a rating of 31X this year’s EPS the shares could still be vulnerable despite the recent falls.