The task of investors is to find businesses that have created value, have a good chance of doing so in the future and are run by honest actors. This task is complicated by certain sectors where businesses don’t ‘look’ like most businesses. Jamie Ward returns with a look at Insurance through the lens of one of its constituents, Beazley.

The majority of business analysis follows a similar process. We are essentially looking for four things

To summarise, our task is to find businesses that have created value, that you think have a good chance of doing so in the future and are run by honest actors. Once we’ve done that, we try not to overpay, but in reality, focusing on business performance over valuation is the key. Nevertheless, this task is complicated immensely by certain businesses that don’t ‘look’ like most businesses. The most obvious example is banking where balance sheet analysis is back to front, in that value is created by determination of the quality of the liabilities not assets. Bruce Packard wrote about the sector in his most recent note and why investors should perhaps reconsider the sector https://knowledge.sharescope.co.uk/2022/02/14/weekly-market-commentary-14-02-22-pzc-k3c-soli-never-says-never-banks-again/

This week then we shall look at another often ignored sector through the lens of one of its constituents.

Beazley is specialist non-life insurer. Specialist because it focuses on areas where it has a specialised underwriting knowledge that allows for super normal returns, like cybercrime for example, rather than commoditise insurance, like car insurance for example. A general rule for non-life insurance is that the more specialised an area, the greater the returns available but the more limited the addressable market. As markets become more commoditised, the returns tend towards the cost of capital but the addressable market can be enormous. Beazley is a portfolio of businesses diversified by both geography and business line. Below is a breakdown taken from the accounts but, for our purposes, it is sufficient to think of it as c. 50% lower return but dependable and 50% higher return but less predictable. 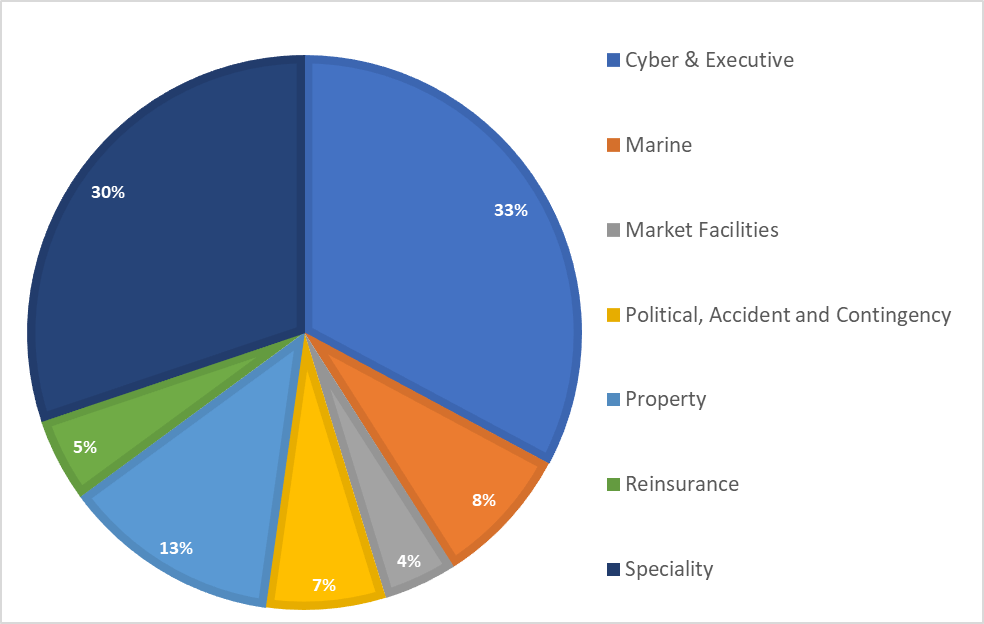 Insurance company balance sheets, like bank balance sheets are confusing. The figures you will see are often very large compared to value. There is a part of them that look like normal (non-financial) businesses, that is to say property, plant & equipment and working capital, but this is dwarfed by financial assets and liabilities. Before looking at Beazley’s balance sheet, it is worth thinking about what you should expect to see. An insurance company has financing capital, largely in the form of equity, that forms its basis. Depending on the types of risk it is taking, this financing capital determines how much business the company can ‘write’ i.e. how much it can insure per annum. This written insurance business is found on its liabilities and is the key determinant of the ‘quality’ of the business. Much like banks, insurance companies are unusual in that they have commoditised assets but non-commoditised liabilities. Its quality is determined by the skill of the underwriting teams, the Chief Underwriter and the culture fostered in the group.

On the assets side, the company lists what it invests its insurance premia into – sometimes known as the float. These are, broadly speaking, split into three:

There is a fourth position called Deferred Acquisition Costs, which are the costs incurred for the renewal of insurance policies. it is fees expected to be paid in the future but not yet received. As an asset it is a use of capital, but reflects money yet to be received. 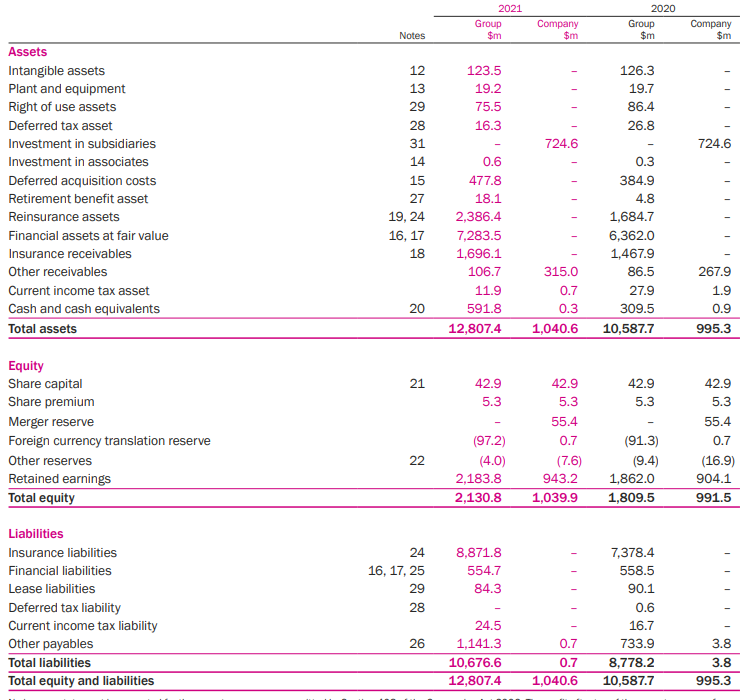 Below is our simplified summary: 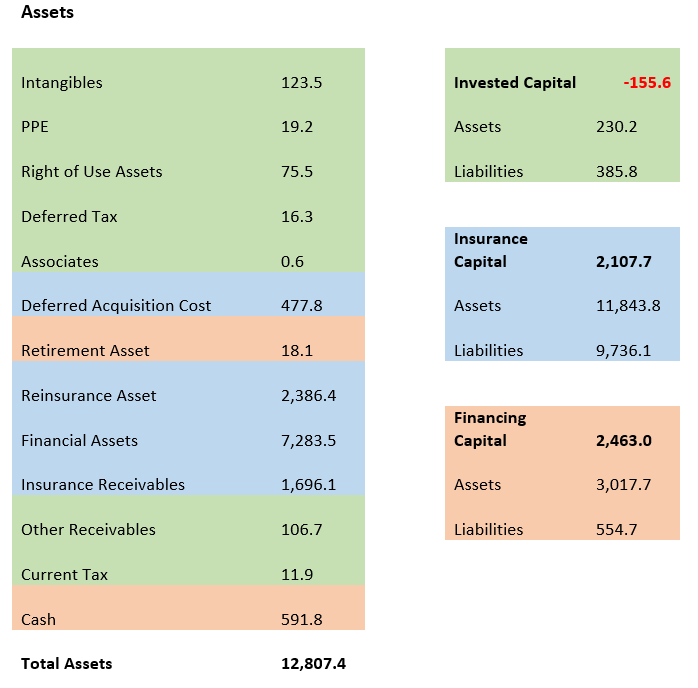 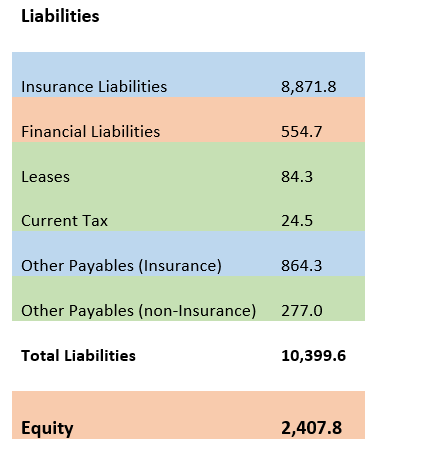 Here we see that the business is a negative invested capital (green bits) business before insurance capital is considered. This makes sense, an insurance company is little more than an office, a bit of equipment and some staff. Many costs are paid in arrears (including remuneration) hence liabilities are larger than assets. On a net basis, the business is largely funded through equity (orange bits). This is both sensible and a regulatory imperative since in very bad loss years, a large debt pile can (and will) bankrupt an insurer. The gross size of the insurance business (blue bits) is determined by the financial strength of the company. We only get an indication of this strength from the balance sheet and need to delve slightly deeper to understand its robustness.

Solvency 2 is a wide-ranging set of regulations that intend to maintain systemic strength in insurance markets. It is similar to what the various Basel regulations etc aim at achieving within banking. It includes proscribed capital requirements for companies referred to as the Solvency Capital Requirement (SCR). Under the regime, insurance companies are required to hold sufficient capital to ensure it can meet all of its obligations with a 99.5% confidence over a 12-month period. In other words, the amount of money capital needed to pay-out in the event of a 1 in 200-year loss year (think of a year with a massive earthquake in a high value area). Insurance companies report their Solvency 2 capital levels in reference to this requirement e.g if a company reported a Solvency 2 of 120%, it would mean it has sufficient capital to pay out all of its liabilities in the worst year in a 200-year period and still have 20% left over.

Additional to this, certain Lloyd’s companies target an Enhance Capital Requirement to further strengthen the industry, which is roughly 35% higher than the SCR; this is in order to help maintain Lloyd’s credit rating. Over and above this, Beazley targets a level of capital between 15% and 25% higher still.

Insurance, by its nature, is uncertain but in line with a conservative manner of balance sheet management, Lloyd’s of London requires its syndicates to maintain robust financial health; in turn Beazley adds further constraints upon itself adding greater financial strength.

The insurance returns and investment returns combine to the total profit of the business. The key determinant though is the combined ratio. Below is the long-term combined ratio achieved at Beazley. 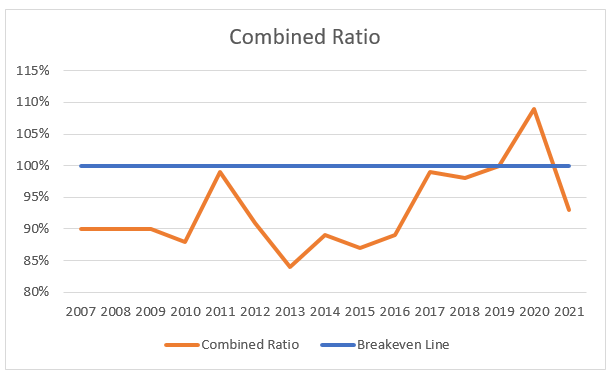 Historically, the company has generated decent returns. However, in line with much of the industry, returns since 2017 have been difficult as there has been an excess of capital in the sector as easy financial conditions has seen capital flood to anything that offers a positive return. In 2020, the business posted an insurance loss as COVID-19 caused a spike in claims. This led to a capital raising (roughly equal to COVID-19 related losses) very early on in the crisis (May 2020). The management anticipated that, given the widespread disruption, much capital will be lost and therefore the insurance market would ease markedly in the coming years. The result was that 2021 was the best year since 2016. The difficult markets we’ve witnessed in recent years can also be seen in the progression of Return on Equity, which over the long term has averaged 14% but has struggled since 2016. 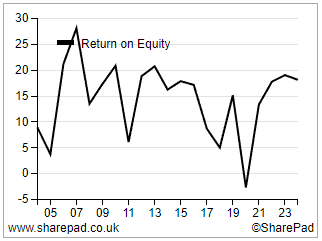 There is a low staff turnover within Beazley. The company was founded in the mid-80s and is only on its third CEO. Andrew Beazley stepped down in 2008, whilst battling the cancer to which he succumbed in 2010. He was replaced by the former CFO, Andrew Horton, who held the role until 2021 when he took up the equivalent role at QBE Insurance Group. He was replaced by Adrian Cox, who has been at Beazley for 21 years and is the former Chief Underwriter. Sally Lake joined the group as an actuary in 2006, becoming group actuary in 2014 followed by CFO.

The company’s uninterrupted dividend record ended in 2020 when it was cancelled (understandably). Overall, the policy is to raise the dividend in line with the level of growth that management believe is sustainable in the business supplemented with special dividends when capital is excessive. 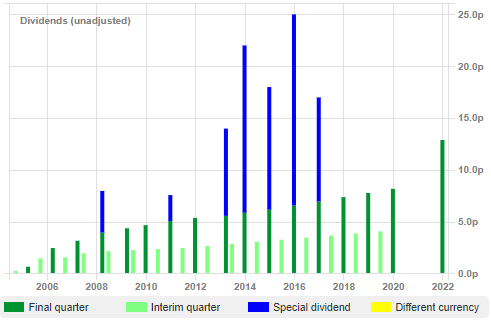 Non-life insurance markets follow a different cycle to other equities. Insurance is a necessity and thus whether business can be written or not is not really what investors should be asking themselves. Instead, insurance returns are driven by how easy financial conditions are. Equities, bonds and any number of other assets are best suited to the opposite conditions. That is to say easy capital means high prices but low insurance returns. Difficult capital conditions are bad for asset prices but mean that insurers tend to generate better returns.

We appear to be at an inflexion, whereby inflation expectations might finally see a return monetary tightening. Asset prices are vulnerable in this situation as capital is withdrawn. However, an investment in an insurer may help offset this as the industry becomes more profitable.

Beazley has a long track record of growth, niche expertise and, seemingly a good culture. Its return on equity, dividend track record and business lines ought to provide a runway for profitable growth. Recently, the company has released well received figures, which has seen the share price move higher. Consequently, the shares are trading at roughly twice its tangible book value having been available much lower for much of the last two years. This seems high(ish) for a 14% ROE business, however were the business to grow its capital base in line with its history, it is entirely feasible it will more than grow into that valuation, especially if a higher return environment emerges.