Events at Hornby prove how turnarounds can take years. But fresh capital, better management and a return to profit could mean the model-train specialist is over the worst and finally heading towards a proper recovery.

Turnarounds can be tempting.

…but you believe your contrarian instincts will yield a huge return as the company enjoys a full recovery.

Mind you, distinguishing genuine turnarounds from shares heading for the graveyard is never easy. And even if the company does recover, the journey typically involves multiple false dawns and takes far longer than anyone ever expects.

One potential recovery worthy of consideration is Hornby. Although the manufacturer of the famous model trains has suffered numerous setbacks during recent years, the following bull(et) points may attract the turnaround investor:

The history of Hornby

Hornby’s convoluted history is befitting of its more recent struggles.

The story starts during 1920 when Frank Hornby developed his first metal clockwork train. Five years later Mr Hornby was manufacturing electric die-cast trains and, during the 1930s, launched the famous 00-gauge locomotives the brand is best known for today.

Numerous corporate actions then followed, including receivership and new owners during the 1960s and becoming part of a toy conglomerate during the 1970s. That conglomerate went under during the early 1980s, which allowed Hornby’s then management to acquire the model-train business and its sister Scalextric slot-car subsidiary.

The company went public during 1986 and ‘diworsification’ into soft toys, action figures and computer games occurred during the 1990s. No bidders came forward when Hornby put itself up for sale in 2000 and fresh management was recruited a year later.

At this point the price chart becomes very interesting; the shares then commenced a six-year run to ten-bagger returns:

Between 2001 and 2004, profits zoomed from £1 million to £6 million after better quality products attracted critical acclaim from the likes of Railway Modeller. Results at the time included the following remarks:

“We have concentrated on developing the quality and detailing of the product, which has been well received by our customers.” (2001)

“We are seeing a real resurgence of interest in both Hornby and Scalextric products across all ages, driven by the improved detailing and authenticity.” (2003)

The next three phases of Hornby’s history provide valuable lessons for today’s turnaround.

The chart below shows how profits fared during Hornby’s different phases:

The acquisition phase occurred between 2005 and 2008 and hoped to replicate Hornby’s comeback with similar brands. The group acquired:

The deals brought with them additional sales of £15 million, although profits never really showed the smooth trajectory seen before the purchases.

Then came the licensing phase. Such deals were emphasised to counter-balance supplier disruptions and weaker UK sales:

“Looking forward, Hornby is in excellent shape. We have agreed a number of new exciting licenses including collaboration with Disney/Pixar to produce products associated with the new Toy Story 3 Movie.” (2010)

“We are pleased that sales of our London 2012 merchandise are gathering momentum. We expect this unique license opportunity to contribute positively to profits in the short term...” (2012)

The licensing agreements did not fare well. The London 2012 models in particular created a £1.3 million loss and proved to be a “distraction from the core business for both our consumers and management“.

The then chief executive decided to leave and a new boss was appointed. He started revamping the supply chain and other operations:

“Since arriving at the business eight weeks ago, I am more convinced than ever that the group can build on a more solid supply chain and support the demand from our customers for our products“

But the ‘transformation’ plan created further disruption and the finance director then took the top job during 2016. Perhaps the most telling remark from this new boss concerned the absence of customer conversations:

“We have resumed attendance at consumer shows to raise the profile of our brands whilst getting closer to consumers to receive their feedback on our progress. We have engaged more closely with our network of Independent customers, which is essential to the success of the business, including roadshows launching our product range for 2017.”

Looking back we can now learn what has worked and what has not worked to judge whether Hornby’s present recovery has some chance of succeeding.

Yet another chief exec was appointed during 2017. But hopes are now high that — finally! — Hornby has the right man for the job.

What makes current boss Lyndon Davies different to his predecessors?

To date Mr Davies has importantly:

One advantage of turnarounds is that you don’t need to spend too much time analysing the old financials. They will never look pretty, and often won’t be a useful guide to the future.

…and so conventional debt is zero.

The rising cash balance has not been produced through free cash flow (green bars), but from issuing extra shares (red bars): 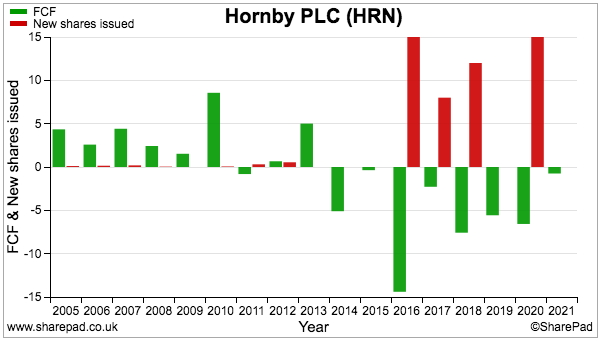 An enormous £50 million has been raised during the last five years to right the wrongs of the past and repair the balance sheet. The new shares were issued at 95p, 27p, 30p and 36p (versus the recent 47p) and the share count has more than quadrupled:

The main buyer of the extra shares was Phoenix Asset Management, which has owned a 10% minimum of Hornby since at least 2010 and presently controls 75%:

Phoenix is not afraid of taking large holdings in underperforming businesses and instigating change. Earlier this year the fund manager used its 30% stake to oust the board of funeral group Dignity.

Phoenix’s flagship fund boasts a 9% annualised return (after fees) since 1998, which has beaten the FTSE 100 but is not quite in the Fundsmith performance league.

Phoenix’s flagship fund is not available to the general public, but the same manager also runs the Aurora investment trust that owns the same flagship-fund shares.

This trust has returned approximately 60% (including dividends) since Phoenix took control during early 2016:

Phoenix does seem to have a respectable investment record, which perhaps bodes well for other Hornby shareholders. But the £58 million Phoenix has tied up in Hornby may only represent a fraction of its total funds, while the original investment could have hit zero had Phoenix not injected all that extra money.

Should you buy Hornby shares?

Hornby emphasises how turnarounds can be protracted. The company has been trying to revive for the last ten years, during which time shareholders have witnessed three board shake-ups and four equity placings.

But the omens now feel more positive than before. Hornby’s 2021 results were published during June and showed favourable progress buoyed by lockdown-driven demand. Sales advanced 28% to £49 million to strike a £1 million operating profit — the first profit since 2015.

Mr Davies notably claimed the business was “firing on all cylinders“:

“We are all excited by the prospects for Hornby; we are heading in the right direction and the engine at the heart of the business is now firing on all cylinders. Our world-renowned iconic brands have a fantastic pipeline of new products for the future. The excitement is Hornby!”

The return to profitability and those upbeat comments suggest the hardest part of the turnaround may have finally been accomplished.

The present focus might therefore turn to how far profits can improve further. Mr Davies claims the ‘fixed’ costs in the business (of £21 million) can support revenue of £55 million, which if attained, would lead to an operating profit of £4 million were the gross margin to remain at 45%.

I would say the £78 million market cap is already pricing in a potential operating-profit recovery to £4 million, and is perhaps currently looking towards a return to the £9 million peak of 13 years ago.

One ‘buy’ signal I am monitoring is staff productivity. Revenue per employee underwent a permanent step-change (black line, right axis) when Hornby recovered during the early 2000s:

Maynard writes about his portfolio at maynardpaton.com and hosts an investment discussion forum at quidisq.com. He does not own shares in Hornby.

7 comments on Should you buy Hornby shares? | Small-Cap Spotlight Report