Warren Buffett admitted the other year that he had not bought shares at an IPO since 1955.

Mind you, every great share went public at some point… and who would not want to have bought, say, Microsoft, at its IPO? (a 3,717-bagger since).

I suspect Mr Buffett’s warning would apply to the majority of those 47 names. But maybe not to small-cap Calnex Solutions, which at first glance appears to be one of the more appealing new issues of last year.

The shares joined AIM at an initial 48p and have more than doubled within less than a year:

Calnex was established during 2006 and today claims to offer a “market-leading” suite of test and measuring equipment for the telecoms industry.

The 92-second video below provides a useful company overview and outlines how the advent of 5G and cloud computing are boosting product sales:

Customers are a veritable Who’s Who of the telecoms sector…

…and require sophisticated hardware to ensure their networks meet industry standards and operate perfectly together. Calnex says network timings and synchronisations have to be measured to less than 0.000000001 of a second.

Such technical precision supports the company’s claim of its equipment serving “high value niches” that enjoy “limited” competition. Barriers to entry include extensive research and development as well as, apparently, “advanced knowledge of future market requirements” gained from customers and regulatory bodies.

Calnex’s flotation document cites independent research predicting the telecoms-testing market will experience annualised growth of 11.5% between 2020 and 2024. You can see the equipment in action for yourself here.

Calnex’s short quoted history means SharePad carries only a limited amount of company information. But we can see revenue and profit have recently climbed higher… 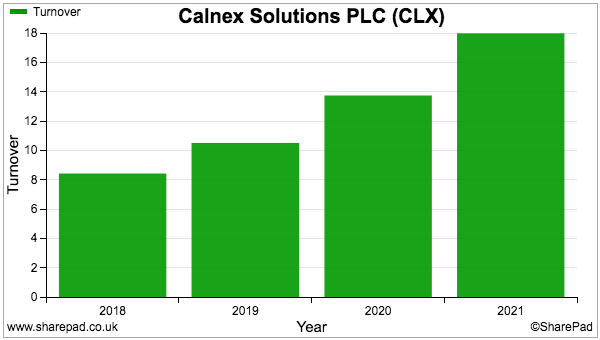 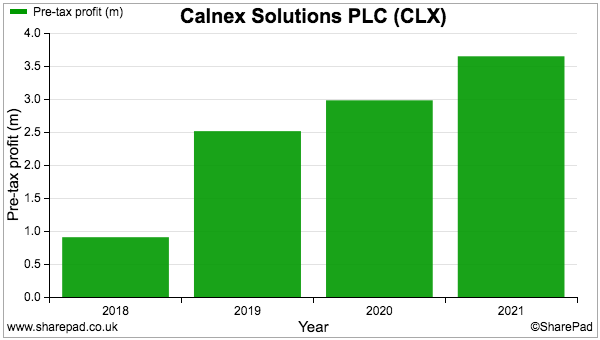 …while operating margins and returns on equity have both come in at healthy 20%-plus levels: 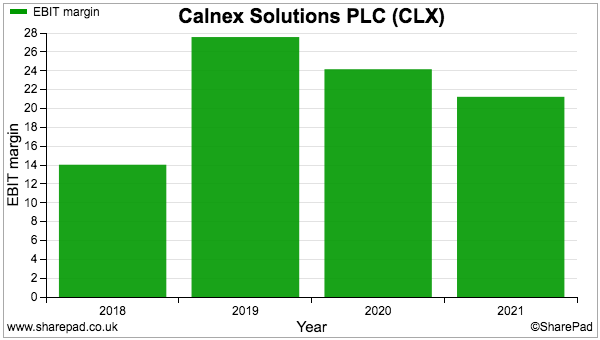 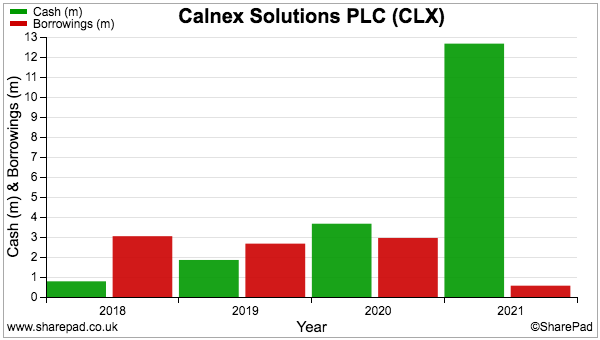 One potential drawback to Calnex’s past expansion is a dependence on Spirent Communications. Some 72% of revenue — almost £13 million — was derived from distributing equipment through the FTSE 250 member last year. 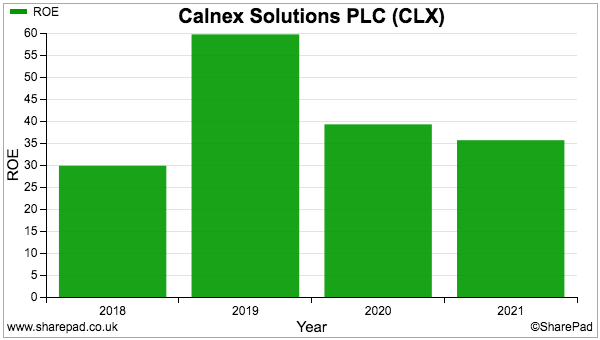 Calnex says the 72% is “not indicative of the Group’s reliance on Spirent“, and claims to enjoy “strong direct relationships with the relevant end users“. Calnex also says it has in the past changed distribution partners “multiple times“.

I suppose if Calnex’s products really do serve “high value niches” and suffer from only “limited” competition, the equipment could effectively sell itself through any sizeable distributor.

Note that Calnex is a very small customer of Spirent. The £13 million earned through Spirent last year represented approximately 3% of the mid-cap’s $522 million revenue.

Now for some digging into Calnex’s accounts, which leads to other potential drawbacks…

A blog post from Ciphersense Research tipped me off that not everything was straightforward within Calnex’s books.

The Ciphersense blog dives deep into the group’s pre-flotation acquisitions and makes allegations of “concealing” impairments. 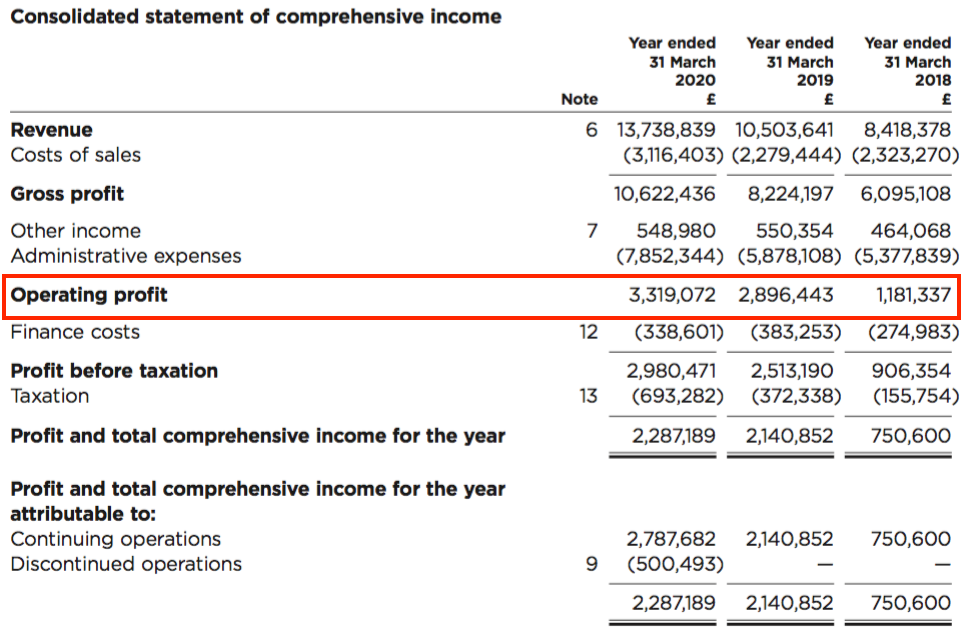 And for 2020, Calnex reported a £2.5 million operating profit following a £0.5m impairment that was not displayed within the flotation document:

I think Calnex converting the original 2018 loss into a profit arose from this change to its amortisation policy:

Calnex doubled the useful life of its products, which meant the associated development costs could be written off over a longer period and therefore not impact reported earnings as much.

I must confess I have struggled to get to the bottom of the 2020 impairment that went missing in the flotation document. The alteration may have something to do with an acquisition, which was highlighted within the original 2018 cash flow statement…

…but had disappeared when re-published within the flotation document: 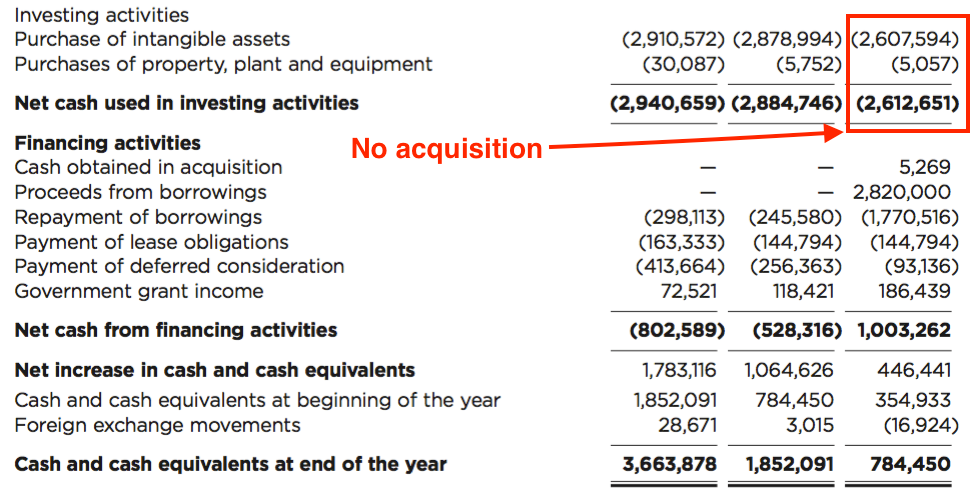 A purchase of a German business during 2019…

…that was shut down less than eight months later just adds to the confusion.

You will have to decide for yourself whether these discrepancies reflect deliberate ‘window dressing’ to put Calnex’s pre-flotation financials in a better light. That Ciphersense blog might be worth re-reading.

Another niggling feature of Calnex’s pre-flotation financials is the notable level of ‘other income’: 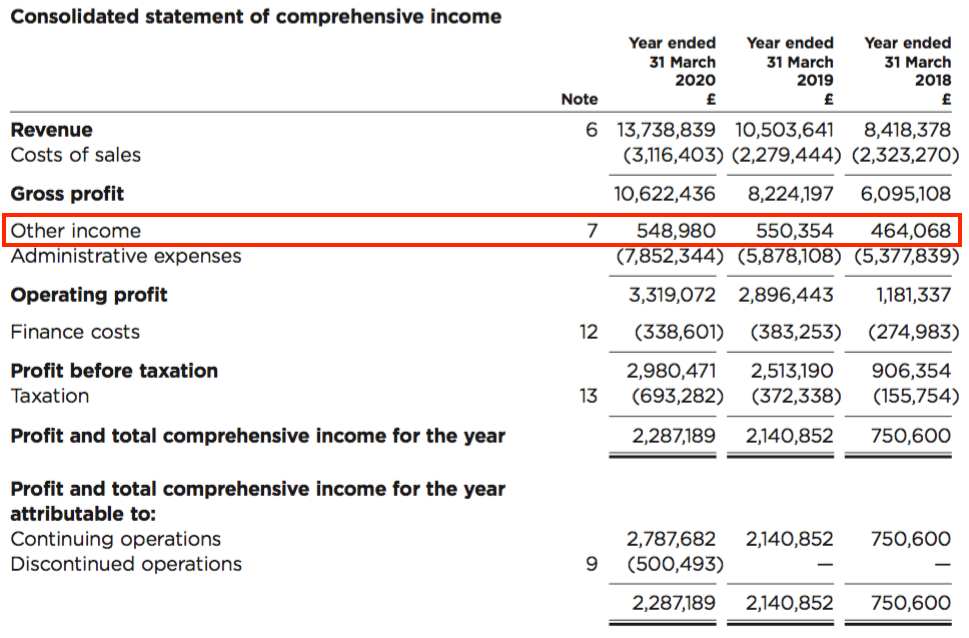 Such income represents government grants and R&D tax credits, and occurred during 2021 as well:

Between 2018 and 2021, this ‘other income’ totalled £1.2 million — and aggregate operating profit during the same period would have been 19% lower without such benefits.

Whether profit effectively earned through state payments should be viewed as equal to profit produced through conventional trading is debatable.

The flotation document does say the grant providers could ask for their money back:

“Calnex has been the recipient of significant government grant funding, primarily for research and development purposes from both the Scottish and Northern Irish Governments. Under the terms and conditions of such grant funding, the grant provider has, in the most part, the right to demand repayment of any such funding that has been received by the Group within the 5-year period from the date of the last claim.”

Calnex has received government grants of approximately £1 million during the last five years, primarily from Scottish Enterprise. Questions could be asked as to whether a quoted company reporting adjusted earnings of £4 million really requires further handouts from a taxpayer-funded agency.

Note that Calnex has not been contributing to the government’s coffers of late. SharePad shows the company receiving tax refunds of £0.6m during 2018 and 2019, and paying no tax thereafter:

Why exactly HMRC is not troubling Calnex for money is not made clear within the company’s documents. Reasons probably include those R&D tax credits and perhaps historical losses. But for a business that reported an £11 million total operating profit between 2018 and 2021, a lack of cash taxes paid does feel peculiar.

Chief executive Tommy Cook founded the company after working 23 years in the telecoms industry. Mr Cook is 60 years old and the flotation did not seem to be an obvious retirement-planning exercise. Mr Cook sold a quarter of his shares at the flotation and retains a 21% stake with a recent £18 million valuation:

A non-exec director who has backed Calnex since 2009 reduced her holding by 40% at the flotation. Grant benefactor Scottish Enterprise reduced its holding by 50%.

Anand Ram was paid far more than Mr Cook before stepping down from the board just before the flotation.

Mr Ram is the Calnex’s business development director and may well have played a significant role to underpin Calnex’s recent growth: 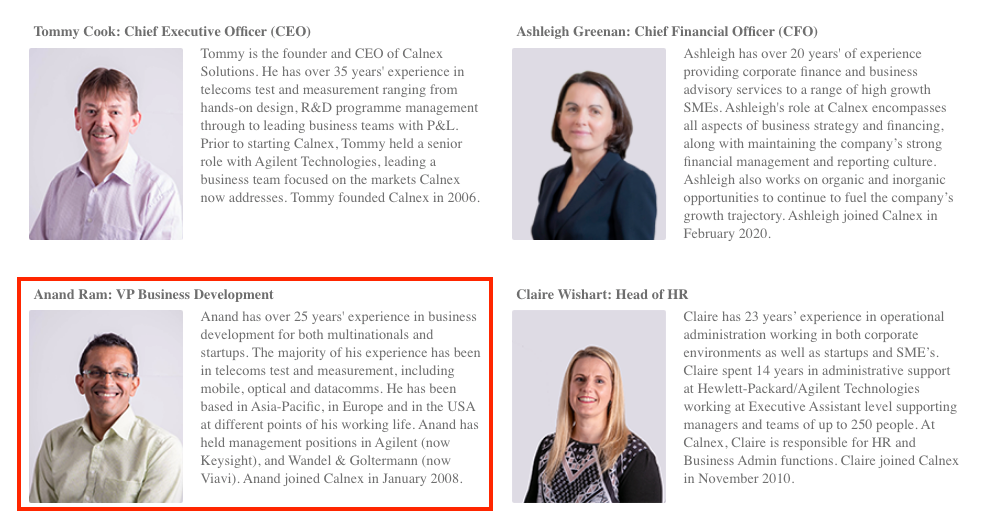 The finance director’s CV is not ideal. She joined Calnex during early 2020 following a three-year stint as FD at a specialist engineer. This previous employer called in the administrators a few months after her departure.

Annual results published during May showed super progress. Revenue gained 31% to £18.0 million while adjusted profit before tax climbed 43% to £5.1 million.

Founder Mr Cook described the year as “exceptional” and said Calnex had “experienced growth across all product lines [that] exceeded our initial expectations“. Customers purchasing the company’s equipment increased by 15 to 192 and “high levels of repeat demand” were witnessed.

The figures were bolstered partly by the pandemic. Calnex said

“the impact of COVID-19 on accelerating customer orders and on travel cost savings resulted in approximately £1m of benefit to adjusted profit before tax“.

Adjusted profit before tax would therefore have been £4.1 million, up 15%, without the pandemic assistance.

The outlook may have disappointed some shareholders. Calnex predicted its current-year results would be “consistent” with the latest figures, and SharePad shows the following forecasts:

The predicted mix of profit increases and decreases for 2022 is due to how SharePad and City brokers interpret amortisation and other accounting nuances.

The 2023 forecasts suggest a resumption of double-digit growth to match the aforementioned 11.5% CAGR independent research estimate. The 2023 P/E is not in bargain-basement territory at 25x.

AB was once a small firm earning minimal revenue and profit… 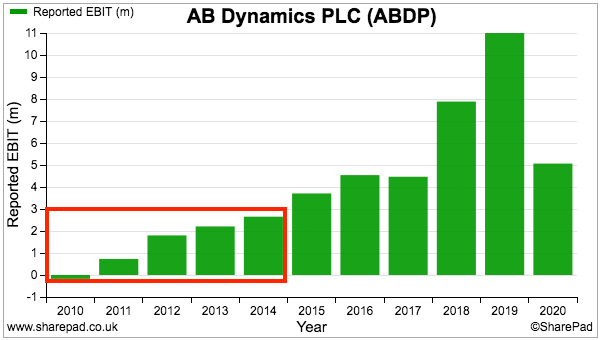 …but eventually hit the big time as the large motor manufacturers scrambled to buy its vehicle-testing hardware to develop self-driving cars.

AB’s share price has not performed too badly since its flotation:

Should you buy Calnex shares?

Whether Calnex can follow AB’s share-price lead — and continue to defy Mr Buffett’s warning about IPOs — remains to be seen.

Prospective shareholders will certainly have to become comfortable with the pre-flotation accounting and get to grips with the grant and tax situation.

Mind you, those drawbacks could become inconsequential very quickly if Calnex’s products really are market-leading and demand really does grow at that projected 11.5% CAGR.

Maynard writes about his portfolio at maynardpaton.com and hosts an investment discussion forum at quidisq.com. He does not own shares in Calnex Solutions.

6 comments on Should you buy Calnex shares? | Small-Cap Spotlight Report