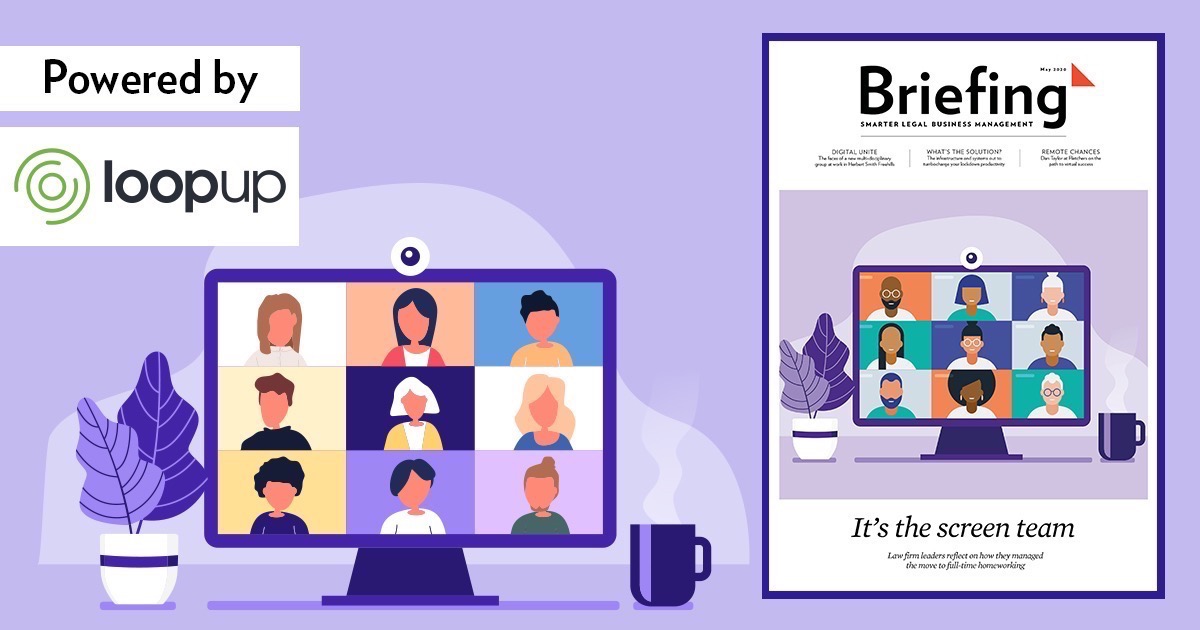 Welcome to a series of occasional articles in which I shine an investigative spotlight on particular small-caps.

My aim is to demonstrate how to analyse companies in SharePad and beyond to help you become a more informed investor.

I start today with LoopUp (LOOP), a £44 million developer of software for remote meetings and conference calls.

The other month the company issued a sales warning that caused a 50% share-price crash: 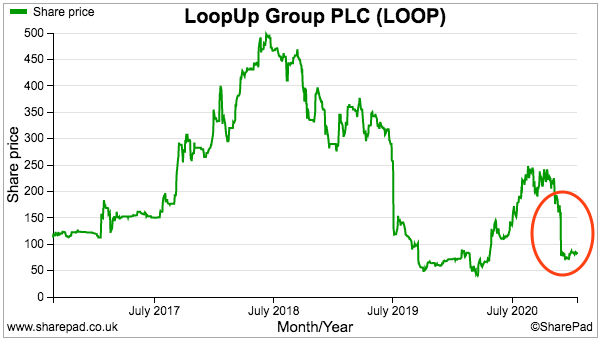 LoopUp should have been a pandemic winner last year selling its remote-meeting systems… so why has the company disappointed?

“Since our 23 September 2020 half-year report, our core Professional Services (“PS”) Meetings and Event businesses, for which the LoopUp platform is optimised and differentiated, have continued to trade robustly versus pre-pandemic levels… Here we remain confident in our ability to drive attractive, sustainable and profitable growth.”

But this paragraph admits the smaller ‘non-PS’ division was becoming troublesome:

“However, we are seeing an acceleration of churn in non-PS sectors, where our Meetings capability is less differentiated and competition is more intense. Here, we expect trading to remain challenging, although this now represents just 14% of total LoopUp Platform2 revenue.”

This paragraph then gives the overall financial impact:

But here is the hammer-blow:

“The Group’s annualised revenue run-rate (ARR) currently stands at c.£34 million, made up of c.£28 million of LoopUp Platform capabilities (Meetings, Cloud Telephony and Event) and c.£6 million of Cisco resale, which represents an estimated entry ARR for FY2021 trading.”

Sales appear to have collapsed, and the consensus 2021 forecasts on SharePad confirm that to be the case:

Taking the minimum 2020 projections, second-half revenue looks to be £18 million while second-half adjusted Ebitda could be less than £3 million:

Both figures are miles below the corresponding first-half achievements that were bolstered by the initial pandemic lockdown.

The 50% price crash now starts to make sense. If my sums are correct, revenue from the ‘core’ LoopUp service plunged 43% from the first half to the second.

Adding salt to the wound was the short gap between the first-half statement and the profit warning.

Just nine weeks prior, the first-half results had brimmed with positive adjectives:

“The results demonstrate six months of strong financial performance, with significant revenue growth, margin expansion and high cash flow conversion. This performance has been driven primarily by the large-scale migration towards working from home due to Covid-19.

The Group enters the second half of the year with major new customer wins set to roll out, a healthy new business pipeline, and a strong balance sheet.”

Could we have foreseen LoopUp’s trouble? Quite possibly.

For a start, the business had issued an earlier warning.

During July 2019, the group blamed “general macro-economic factors” for experiencing “subdued revenue across its long-term customer base”.

The upshot was to reduce revenue and profit expectations by 7% and 20% respectively. 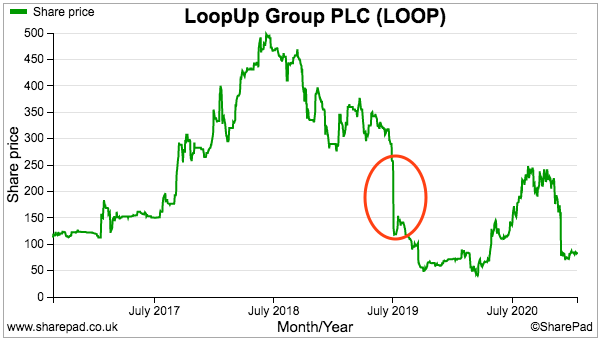 But we need to go back to 2018 to what seems to be the primary danger signal.

The purchase (red bar below) was funded partly by new shares (blue bars), and the cost dwarfed the minimal free cash flow (the tiny green bars) the business had previously generated: 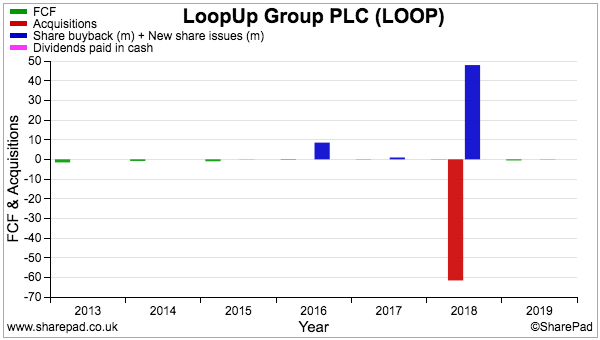 Huge acquisitions should always ring alarm bells, as too often they signal a business desperate for growth. Huge acquisitions may also leave executives stretched as they attempt to cross-sell services, create savings and generally ensure 2 plus 2 can eventually equal 5.

With the benefit of hindsight, the 2018 annual report small-print was somewhat unnerving:

The footnote above revealed MeetingZone revenue improved from £22.5 million to £23.7 million during 2018. That 5% advance did not seem spectacular given the new subsidiary’s sales gained 10% the year before.

Of more importance were the figures for the group had MeetingZone been owned throughout all of 2018 — revenue of £44.2 million and adjusted Ebitda of £9.7 million.

Jump to 2019 — and with MeetingZone contributing for the full year — revenue was in fact £42.5 million and adjusted Ebitda was £6.4 million. 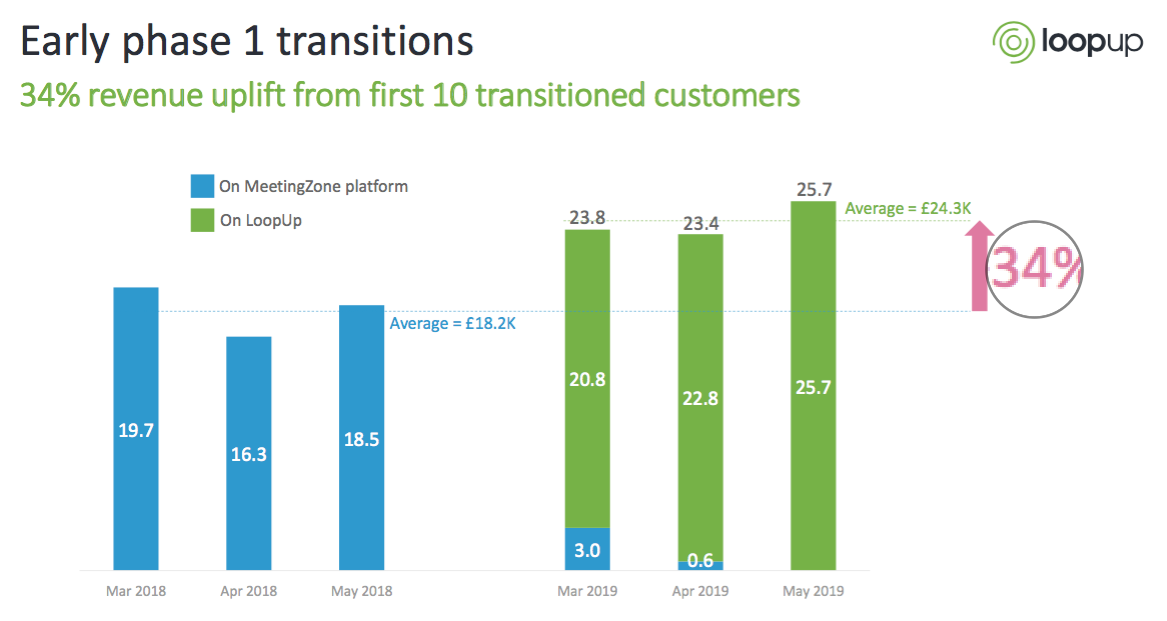 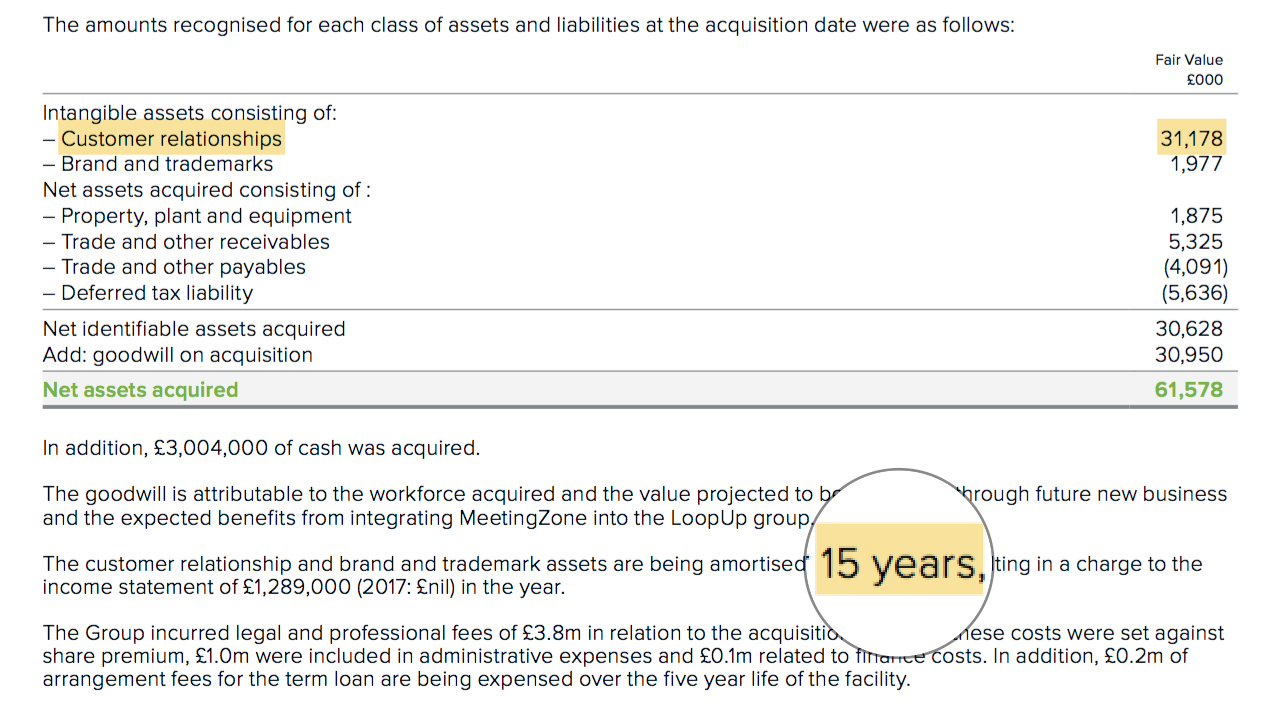 The “customer relationships” recognised as an intangible at the time of the MeetingZone purchase were being amortised over fifteen years.

Such a policy arguably implies the customers acquired through MeetingZone would all remain customers until 2033.

Fifteen years is a very long time, and my rule of thumb is to always consider whether a useful life of more than ten years is realistic.

Comparisons with other software companies reveal LoopUp’s fifteen-year amortisation horizon to be rather generous:

While over-extended useful lives are not the worst accounting policy to worry about, the danger is the finance director is also optimistic on more critical bookkeeping areas — and what he tells shareholders.

(Note: If you are wondering about the auditor’s involvement here, LoopUp’s books are signed off by Grant Thornton of Patisserie Valerie notoriety.)

Key performance indicators (KPIs) are always worth investigating within any annual report.

LoopUp commendably published the following statistics within the 2019 edition:

We can derive three ratios from these KPIs: revenue per user, revenue per minute and minutes per user: 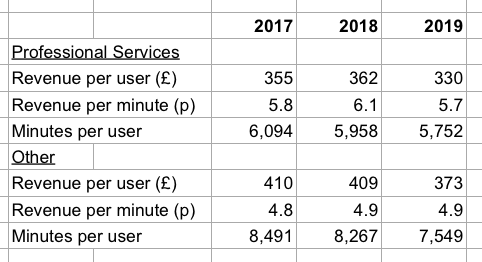 Although 2019 was characterised by that first profit warning, these sums still ought to have raised eyebrows. In particular, revenue per user fell 9% within both the Professional Services and ‘Other’ divisions.

Moreover, I am very surprised revenue per Professional Services user was lower than that of a typical Other user (£330 versus £373).

LoopUp’s recent ambition has been to focus on Professional Services customers (such as legal and financial organisations), which I assumed was due to income from such clients being higher than average.

Perhaps more concerning is minutes per user declining for the both divisions. Usage is critical for LoopUp because, as the annual report states, revenue is billed mostly on a pay-as-you-go basis:

“The significant majority of revenue arises upon usage by customers of services delivered on a pay as you go model, based on seconds of conference time, the number of participants on the conference, and usage of other value added services.”

All told, the KPI ratios did not show an obviously growing business — despite what the headline accounts may have suggested.

Similar to many software companies, LoopUp redirects certain development costs onto the balance sheet rather than expense them immediately against earnings.

These capitalised costs are subsequently charged through the income statement as amortisation: 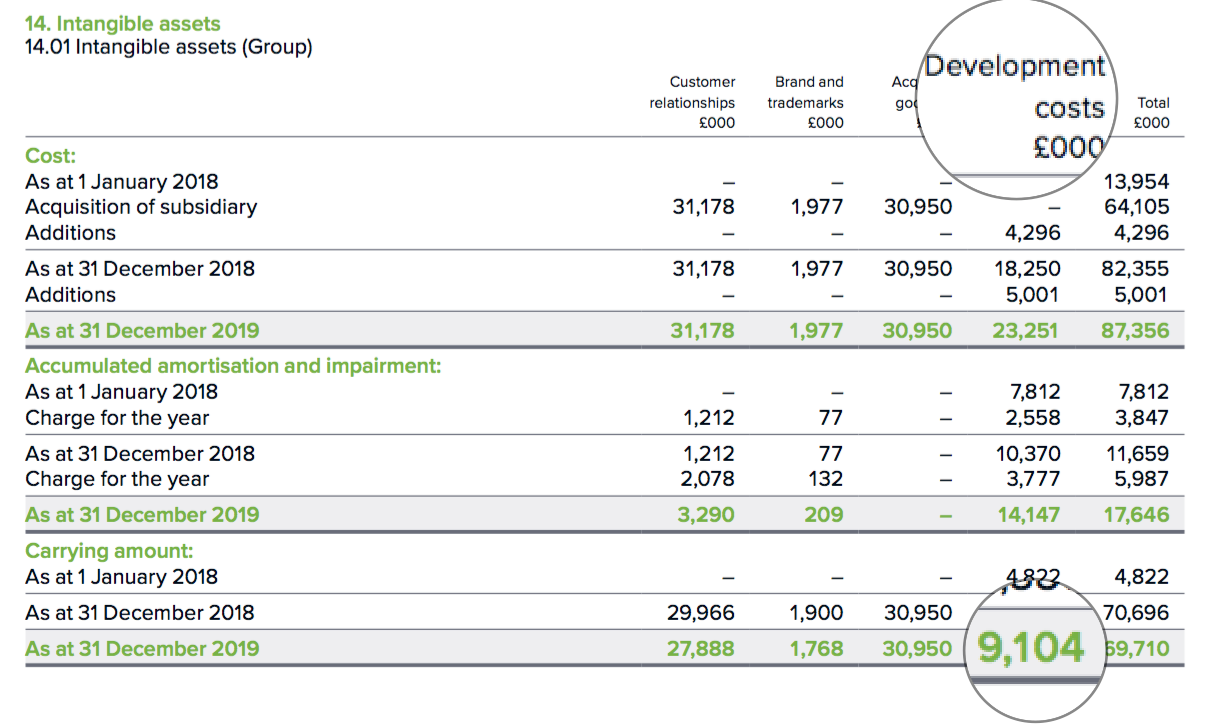 At the end of 2019, development expenditure of £9 million had still to be expensed against profits.

With aggregate adjusted operating profit for the last five years totalling £6 million, factor in the capitalised development costs and arguably LoopUp has not been profitable at all since it joined AIM during 2016.

(Note: LoopUp did not disclose the useful life of its development expenditure within its 2019 annual report, which is bad form).

At the moment, the lack of past profit alongside the sudden sales shortfall and presence of net debt — £3 million at August 2020 — is not a favourable combination.

The directors certainly have work to do. The business is in fact run by two co-chief executives, one based in London and the other based in San Francisco. No doubt the two bosses have made full use of their company’s software to discuss what to do next.

The software itself may be the underlying problem. I wonder whether the service is as popular as it once was.

You would have imagined demand for LoopUp’s remote-meeting software had boomed during the Covid lockdowns.

Yet the update that triggered the recent 50% price slump revealed sales from LoopUp’s main Professional Services division increased by just 6% between January 2020 (i.e. pre-pandemic) and October 2020.

For perspective, quarterly revenue at US firm Zoom Video Communications tripled during the same time.

I suspect the simplicity of LoopUp’s offering may have become a significant drawback.

The service was always sold on users just needing a phone and a browser — no downloads and awkward video needed.

But with the pandemic making Zoom (and similar) video-calling software almost ubiquitous, LoopUp’s audio-favoured service may now feel rather quaint.

…and perhaps they now default to Zoom rather than use LoopUp. Such a widespread migration would go some way to explain LoopUp’s dramatic sales collapse.

The question now is whether further difficulties will occur. All I would say is dramatic sales plunges tend not to be fixed overnight.

Disclosure: Maynard does not own shares in LoopUp.